Soon after Ford decided to cancel the development of Escort RS1700T in March 1983, a new project, initially called B200 was launched by the American car producer. After considering different alternatives, F1 designer Tony Southgate was selected for the chassis design, while the style was developed by Filippo Sapino of Ghia in Turin. The new car, soon renamed as RS 200, was built from scratch to become a real and competitive group B car, although it entered too late to the group B battle with Lancia and Peugeot.

First wind tunnel tests developed at British MIRA facilities (Nuneaton, Warwickshire) and into the recently-build Ford wind tunnel in Cologne, as well as road tests carried out by Jackie Stewart and Malcolm Wilson, showed lack of brake and engine cooling, and poor rear downforce. John Hartnell and Ian Callum took a prototype of the car into Dunton Ford Design Centre (Essex) and refined it by preparing some clay modifications to solve these problems: they installed an intercooler on the roof with a neat cowling and they increased the size of rear spoiler, adding two ears as brake cooling air intakes.

They finally reached a significant increase in aerodynamic downforce and cooling efficiency, while avoiding significant drag penalties. The resulting car had a Cx of 0,40, with 4,5 kg of downforce at the front and 6.0 kg at the rear at 120 km/h. 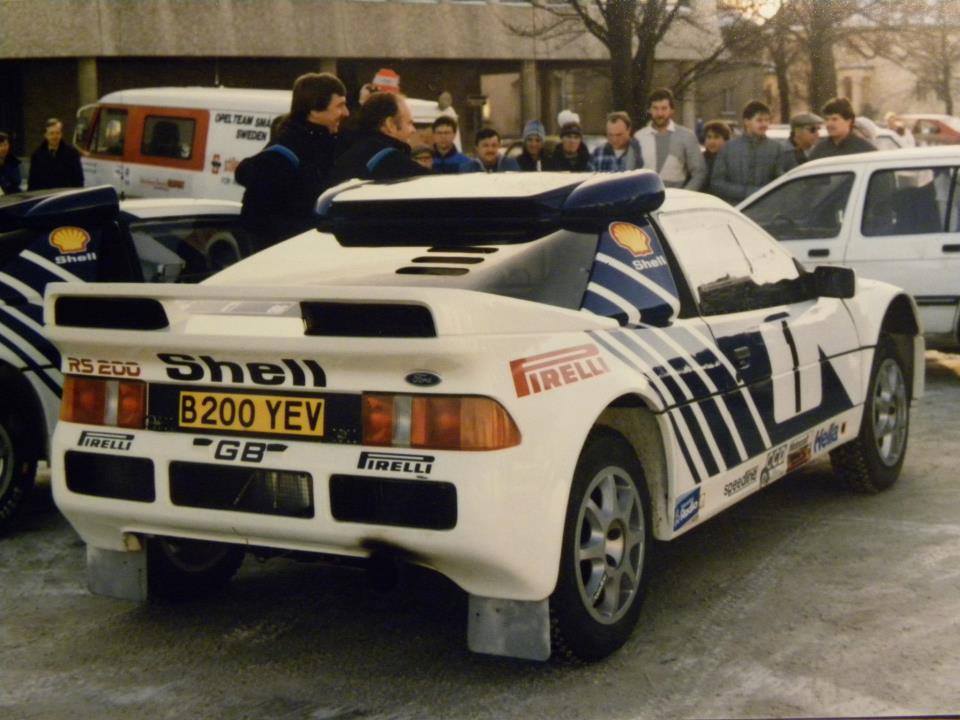 The new Ford RS 200 obtained the victory in his first competition at 1985 Lindisfarne Rally (UK), driven by Malcolm Wilson. But FIA homologation delayed its debut in the World Rally Championship until February 1986, so it joined the championship in Sweden Rally (see Homologation Form here). There, Kalle Grundel drove the car to the third position, right behind Peugeot and Lancia dominating cars.

As it happened with the MG Metro 6R4, the Ford RS 200 obtained its best result in his first appearance. Later two RS 200 led the Acropolis Rally but were forced to retire due to mechanical problems (Grundel) and accident (Blomqvist). In spite of Stig Blomqvist leading the team, similar poor results were obtained in all the other 1986 entries, from Portugal to Sanremo. Again Grundel succeeded in finishing in a top five position in RAC Rally before group B were definitively banned.

Like Ford, Citroën took the decision in 1984 of replacing their original group B project, based on the Visa Mille Pistes car, by a new model, which resulted to be the factory top seller BX model, originally designed by Bertone and with an astonishing Cx of 0,34.

The BX 4TC was designed by Guy Verrier and build in Heuliez workshops (Cerizay, France). With the engine in longitudinal disposition, reduced wheelbase, and unbalanced weight distribution (62% on front axle), the car showed understeering problems and lack of rear aerodynamic load. To improve all these problems, air coolers and a big wing were located in the rear of the car, similarly to the Audi Quattro E2. The car was homologated by FIA in January 1986 (see Homologation Form here).

Car debut in 1986 Monte Carlo Rally showed the car was not reliable yet and the two cars were forced to retire in the first stages. In its second rally in Sweden, JC Andruet gave the car his best result, by finishing in the sixth position.

In the end, only 20 BX 4TC Evolution and 85 BX 4TC Serie 200 were built and commercialized, while the rest where surprisingly destroyed by Citroën, in an attempt to make forget the project. Also, Citroën tried to rebuy the models they had sold, at twice the original price, to also destroy them. At the end, only a few cars survived, and very few competed again.

The end of group B cars supposed also the end of the first golden era of aerodynamics in rallying. It was not until the mid-90s when complex aerodynamic devices were again reintroduced, leading to significant car performance improvement and an increase of rallies popularity.

But rallying history continued, in 1987, back to the simplicity of group A cars.