While Toyota mastered the WRC, especially between 1992 and 1994, other Japanese manufacturers made their progress into the Championship, to prolongate Japanese domination. That’s the case of Subaru, with a long story of individual participations since 1979, once FIA finally allowed participation of four-wheel driving cars, which until then had simply been banned. But it was always with low-power private cars, such as the Subaru Leone 1800 (5th on Safari Rally 1983 by Takoaka/Sunahara) or the Subaru RX Turbo 4WD (third in 1987 Rally of New Zealand driven by Bourne/Eggleton). 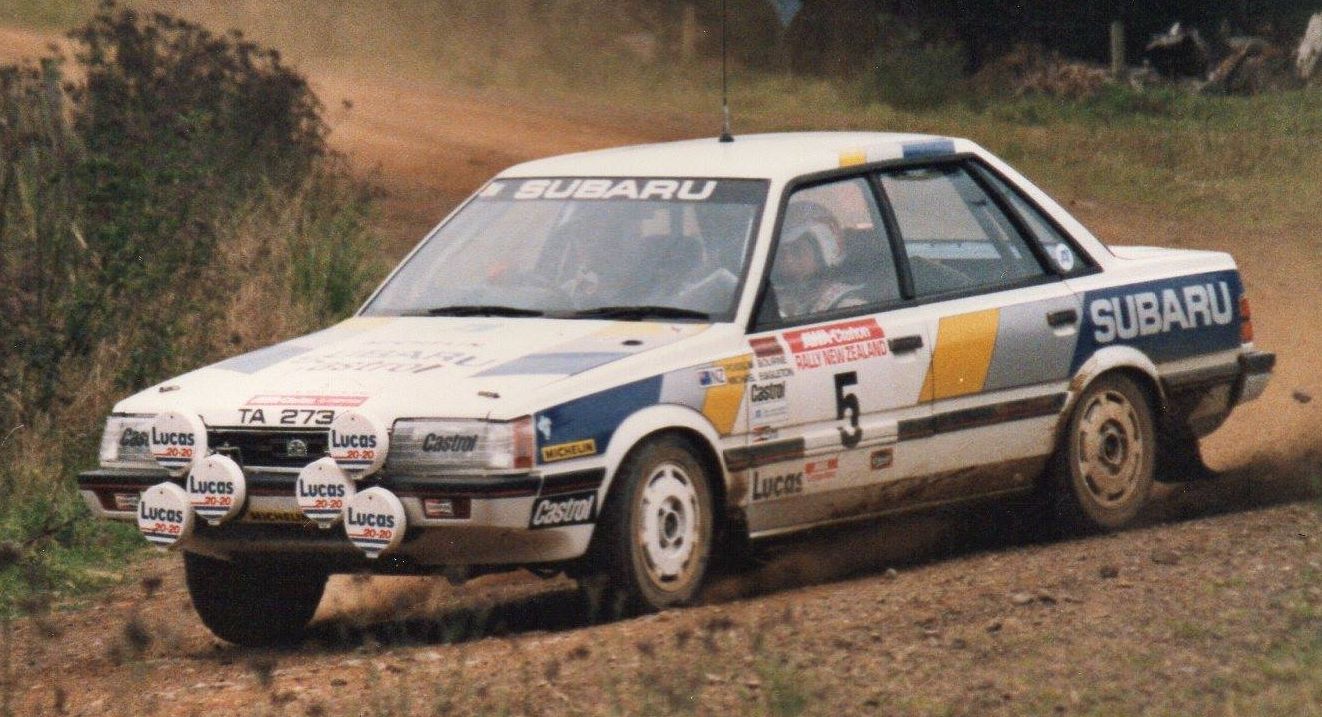 It was not until late in the eighties, when Subaru made the right steps to fight for the Championship, following an internationalization strategy of the company, until then too centered into the Japanese market. First, they created, in 1988, Subaru Tecnica International (STi), their own motorsports division. One year later, STi joined forces with the successful British Prodrive team, to create the Subaru Rally Team Europe (SRTE), which became Subaru World Rally Team (SWRT) in 1993. The team faced the design and building of a new rally car based on the new Legacy RS. And they recruited a highly experienced driver for the new car, Markku Alen.

The Subaru Legacy was designed by Masaru Katsurada, based on early concept design made by Italian Giorgetto Giugiaro. It showed the path for successful future Subaru cars, by implementing the horizontally opposed boxer engine with a lower center of gravity, while also introducing some aerodynamic features that were fully developed in the next model, the Impreza. A front spoiler with multiple air intakes was used, although cooling problems came with the liquid-cooled intercooler located behind the engine. Also, small side skirts were present, but, surprisingly, no rear spoiler, while it was standard in the road car for the UK market.

The new car showed his potential in his first appearance when Markku Alen shared the lead with Mikael and Kenneth Eriksson in the first stage (Anavissos) of the Acropolis Rally 1990.

Problems with cooling and power didn’t allow the car to shine in the Championship, but rising star Colin Mcrae carried out a brilliant season in the 1991 British Championship, which he finally won. Prodrive decided to incorporate him from RAC 1991 and he boosted the team results since then, reaching the second position in Rally of Sweden 1992, his only third race in the World Championship.

The year 1993 was key for the Subaru World Rally Team’s future success. First, they signed a successful sponsorship agreement with British American Tobacco company to promote the brand State Express 555, which would be linked to Subaru in the mind of rally fans for many years. Incorporating the 555 was a way of getting around the tobacco advertising laws, so the new model was named Impreza 555 and even plate numbers including 555 were used on all events, to further promote the brand. Even after the agreement was dropped, Subaru continued to use the distinctive Blue (initial dark Blue became electric Blue after some years) and Yellow color scheme.

The new model was homologated by FIA in April, (Homologation form), while in May, tests of the new Impreza rally car started, and soon they verified it was significantly faster than the Legacy. But Subaru asked Prodrive not to align it until the Legacy could get almost a victory, in order not to impact Legacy’s sales figures, by comparison with the new car. Fortunately, victory came for the Legacy RS in the Rally of New Zealand that year, in what was also the first WRC victory for Scottish Colin Mcrae.

With Mcrae’s victory, Prodrive was liberated to align the new model since the next race, the 1000 Lakes in Finland.

Launched as a road car since November 1992 in Japan, the Subaru Impreza was going to give brilliant moments for the next fifteen years to the Japanese manufacturer. Impreza project leader Hideshige Gomi, subleader Takeshi Ito and designers Tetsuya Hayashi and Hidefumi Kato had the goal of designing a road car, and, at the same time, to make it more suitable for the rally, which helped a lot in his future success. A clue of Subaru’s intentions was that the most powerful version of the car, initially sold only in Japan, was named WRX from the beginning, as it was going to be used as the base for the rally car homologation.

Simple design, equilibrated chassis, excellent handling, innovative transmission design and low tire usage allowed the Impreza to shine in all types of surfaces: from asphalt to snow, from fast Finnish roads to rough terrain in Kenya or Greece.

Four main aerodynamic features defined the Impreza: a well developed front spoiler, including multiple air inlets for cooling purposes and integral spotlights, bonnet air intakes and a big air scoop for both the intercooler and the turbo, deformable dark side skirts, still rare on that time, and a rather simple boomerang-type rear spoiler. All of them contributed to a car drag factor (Cd) of 0,35. There has been always controversy about the efficiency of the spoiler, some say it was purely cosmetic. But the fact Prodrive participated in the styling of the car and that same spoiler was used in competition between 1993 and 1996 proves that it was efficient enough to be used.

The shape of spoiler seems to be the result of an elaborate design process, with rounded sides and a plane zone on top of the spoiler, helping to give it a shape of an inverted aerofoil.

The car was competitive from his first appearance, and only a silly problem with the windscreen demister prevented Ari Vatanen from obtaining a well-deserved victory.

Colin Mcrae also led 1993 RAC Rally until a branch punctured his radiator and forced him to retire. For 1994, the incorporation of Carlos Sainz further strengthened the team, who reached victories in Acropolis, New Zealand and RAC Rally.

1995 season is considered the best season ever for the British-Japanese team, as Mcrae and Sainz dominated most of the races, reaching up to five victories, and fighting for the title until the very last stage.  Sainz won the penultimate rally of the season, Catalunya Rally, where the team obtained his first hat trick in a race, as Mcrae was second (after penalization forced by the team due to ignoring team orders) and Liatti third.

Colin finally obtained the victory in RAC Rally, where he ensured the first world title for a British driver, and the team obtained a second hat trick in a row, as well as the victory in the Manufacturers Championship, after two years of Toyota domination.

In 1996, Sainz left the team to Ford, and he was substituted by Piero Liatti and Kenneth Erikson, both of them contributing to the team’s second manufacturer’s title in a row. On the drivers’ competition, Mcrae was suffering from different problems and could not fight for the Championship. Another rising star, Tommi Makinen, got his first title with a Mitsubishi Lancer.

For 1997, new regulations were introduced, and a new category was created (WRC), with more powerful and aerodynamic cars. They were supposed to improve group A car’s performance….although Mitsubishi proved not to be the case.

Mitsubishi’s success started with the Mitsubishi Galant VR4, while Subaru history in rallying continued with the Subaru Impreza WRC.