With the new regulations for 2017, the WRC undercar aerodynamics have been the object of deep study from all teams, in order to improve speed both through corners (by higher downforce or lower lift) and straight lines (by reducing drag).

Teams have opted for different and more or less developed strategies, incorporating elements such as a front splitter, side skirts, wheel diffuser, flaps or rear diffuser, in addition to a flat underbody.

To better understand how aerodynamics work under the car and the role of each element, let’s imagine we travel with air, over an asphalt stage of the 2017 WRC Championship.

One important point before the start is Bernouilli’s principle: the higher the airspeed, the lower the pressure. And, conversely, low speed means higher pressure.

Suddenly, a noisy and strange car approaches us and…. if we’re able to keep close enough to the asphalt, we will see a kind of platform (front splitter) approaching us and trying to split air into two fractions: a massive portion is directed to flow over the car body, while a selected, small portion is allowed to enter below the car.

Although all cars incorporate similar front splitters, it is worthy to point out that, while the Fiesta and the C3 splitters seem to be completely flat, that of i20 and, especially of the Yaris point upwards. This could be done to protect the splitter on rough terrains. 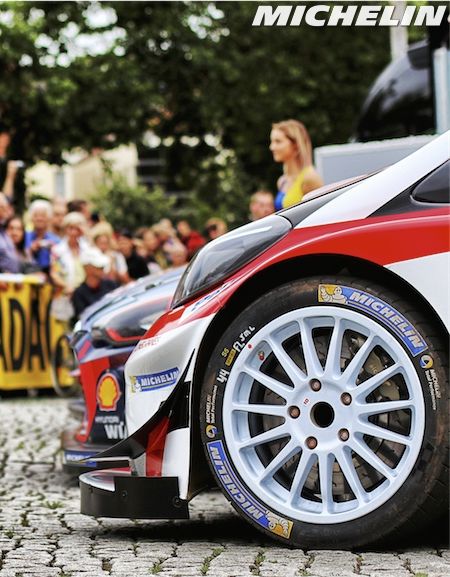 If we are lucky to be part of the second option (air below the car), we can consider ourselves very happy, as we will enjoy an unforgettable journey only a few can experience (most of the air will be sent over the car). Reduced air content flowing and a lot of space available, there is no option….we can go faster, let’s accelerate!

If we have no choice but to flow above the front splitter, as much of the air, we will contribute, by increasing pressure over the (big) upper surface splitter, to lower it down, and so still less air will be able to flow below it.

We are flowing between a smooth asphalt (let’s say in Rally Catalunya) and a smooth flat surface over us (underbody), belonging to a car flying at more than one hundred km/h, so rugosity is not a problem, we can keep accelerating!

In some cars, it is even normal to tilt the flat surface at a small angle (between 1 and 2º) in the front part, and then it acts as a Venturi, as it contributes to accelerating the air even more. Due to the very small angle, it is difficult to verify it on WRC cars just from pictures.

The picture above shows that all current WRC cars’ underbody is almost completely flat. This means lower drag.

When approaching to suspension arms, we will find that somebody installed some protections that, apart from protecting the suspension, will allow us to smoothly flow over them, with much lower rugosity than in other cars without such protection.

From the car sides, some air tries to join us, but it is slower and do not follow our direction, so if it managed to join us, it would make us to lose energy and to decelerate. Fortunately, somebody placed some structures on the sides of the car (side skirts) which prevent side air from entering and disturbing us so we can keep flowing. Also, the presence of dive planes in all cars contributes to blocking air from entering, as dive planes generate some vortices that flow alongside the car, thus acting as a barrier that blocks the air trying to flow down the car from both sides.

All 2017 cars have side skirts;  most are almost flat, except those of the Toyota Yaris WRC, in which the last section has a curved shape to send the air upwards, helping airflow over the rear wheel arch, thus reducing drag.

In case we travel with air flowing on any of the sides of the undercar, violent impact on rear wheel seems unavoidable, which is going to reduce car (and air) speed. But this is not true for all the cars.

If we are flowing below a Toyota Yaris WRC, such airstream will find a channel, under the side skirt, which will send air towards a diffuser, located in front of the rear wheel. Deceleration caused by such a diffuser will reduce the force of the impact of air against the wheel, and speed loss will be significantly reduced.

If it’s under a Hyundai i20 Coupé WRC, we will find no channel, but a sudden diffuser in front of the rear wheel which will also decelerate air and reduce impact consequences.

If it’s a Citroën C3 WRC, we won’t find any diffuser, but a flap in front of the rear wheel. The impact of air against flap is also violent but produces less drag than impacting over a rolling wheel, so speed reduction is lower.

If it’s a Ford Fiesta WRC…..nothing seems to prevent air from impacting over rear wheels so we will notice the impact and car speed will be reduced, with respect to the other cars.

In case we flow by the center of the car, and as soon as we progress in our path, we will feel like something is sucking us from the rear of the car. It is the Venturi effect caused by the presence of the rear diffuser. It will help us to flow even faster, that is, at lower pressure, and we will notice that the car gets even closer to asphalt, due to the additional downforce generated. In all cars, we will be conducted into channels by vertical, flexible streaks, which contribute to a more ordered, less turbulent flow. Also, the rear wing contributes to generating low pressure below so we will accelerate even more on these cars with higher wing effectiveness.

When we finally reach the end of the car, we will find that available space suddenly increases, and as a consequence, we will decelerate. Probably we would have liked to continue flowing so fast, but somebody thought we would also appreciate a smooth mixing with air coming from over the car at low speeds, in order to avoid sudden and violent mixing. And it works! Mixing is smooth and the flow behind the car results to be smoother and with less turbulence (smaller vortices), which allow the car to keep his high velocity without energy loss, and very quickly it walks away from us. Yes, it’s a pity such an amazing journey finished so fast, but if we remain close to the asphalt, in less than two minutes we can repeat the experience, another car is coming!