Toyota Gazoo Racing WRT Team has started the test program for the development of new modifications for the 2018 Yaris WRC. The tests have taken place in a gravel stage near Almería, in Southern Spain, with Esapekka Lappi/Janne Ferm at the wheel. The modifications evaluated on these tests face some of the problems the car has undergone during the present season, such as lack of aerodynamical balance between front and rear or poor cooling capacity.

The most significant change has been the addition of a second dive plane in the front bumper, while the existing (lower) one has been enlarged.

The top dive plane has been installed instead of the lip present in the 2017 version of the car, as the body of the car has been narrowed.

The second significant modification is the increase in the size of the frontal air inlet, which has now a bigger, inverse trapezoidal shape. Comparison with the picture below from recent Wales Rally show the differences for both modifications.

Pictures by Fernando Cruz (top) and Lukasz Mikulski (down)

The pictures show also other modifications tested in Almería. The first one is the redesign of the front wheel arch, which has now a top hole for additional air removal. By removing air from the wheel space, still lower pressure is obtained below the car. In front of these holes, a small wing has been added, as a prolongation of upper dive planes, to help airflow upwards, thus contributing to increase pressure on front axis from above. Also, it prevents frontal airflow to collide with air escaping from the wheel space, which would have resulted in higher drag. The combination of lower pressure below and higher pressure above gives as a result higher downforce.

The side view shows clearly the increase in size of new dive planes. Also the presence of a small lip on the top one, similar to those used by Hyundai in 2017. These new dive planes will help to increase downforce at the front of the car, thus allowing to equilibrate excellent amount of downforce the rear wing supplies to the car, which at the end means better handling and faster turning in bends.

The new pictures (by CulturaRacing.es) from the second test day, with Juho Hänninen at the wheel, show that louvres have been added to the air outlet of the front wheel, similar to those used in the rear wheels. Although top louvres are not horizontal, as they are designed to send air upwards, through the new hole on top of the arch. The image also shows the rear view of the small wing on top of the arch. 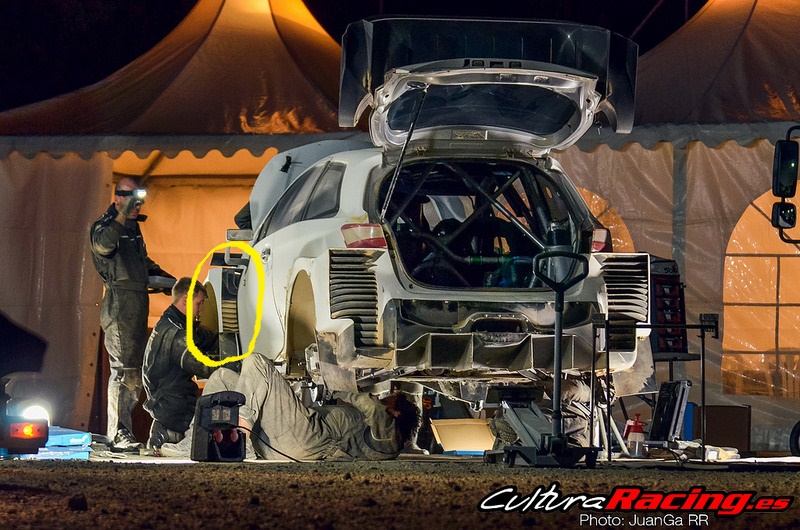 Just two side small louvres were used in the original air outlet of the front wheel arch in the car configuration used in the present season.

The pictures do not show any modification on the rear part of the car. But it is only the first test for 2018, so there is still time for additional modifications to be tested.