The recent aero test of the Ford Fiesta WRC developed in the wind tunnel of Windshear in Concord, near Charlotte, NC (USA), by Ford Performance aerodynamic engineers, together with the video recently released give us a nice opportunity to review how these cars are evaluated in a wind tunnel. 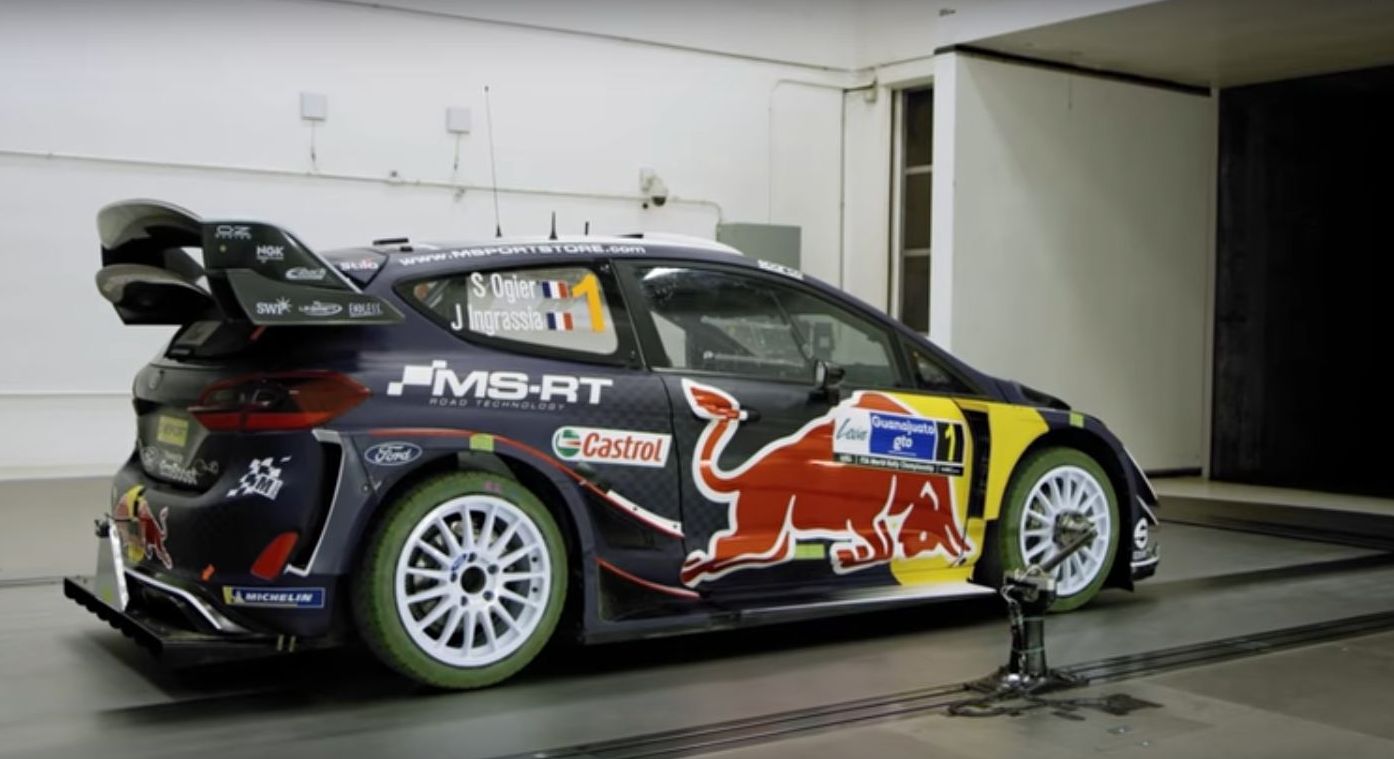 To better prepare season 2018 and, even most important, to convince Seb Ogier to remain with the British team, Malcolm Wilson, M-Sport Team Principal obtained from Ford Motor Company a new agreement to supply additional technical support from the global Ford Performance organization. Ford Performance is mainly involved in the development of NASCAR and IMSA GT programs, from their research and technology development center in Charlotte, and it is led by Mark Rushbrook, global director of Motorsport.

As we already analyzed in a previous post, the Ford Fiesta WRC was the only car of the WRC 2017 generation entirely designed by CFD, with no wind tunnel test during the design process. Validation of the design was only performed during road tests, which means that any piece had to be produced and tested in the car without any previous small-scale verification. This procedure is normally used when the time is scarce (which was the case for M-Sport), but can lead to a long and expensive design procedure, in case the first proposals are not successful.

In spite of the excellent results obtained by the M-Sport’s Fiesta WRC in his first season (when they brilliantly obtained the driver’s and manufacturer’s titles), one of the first fruits derived from the new collaboration with Ford Performance was the validation of the CFD design of the car in a wind tunnel. With that purpose, one of the cars was sent to Charlotte right after the end of Rally of Mexico 2018.

The aero test was developed in the wind tunnel of Windshear, which can reach speeds up to 180 mph (or 290 km/h), with Ford’s Sriram Pakkam as Aerodynamics Responsible. Images from the video show that the test was developed with a car at a 1:1 scale, which means that test could be developed at speeds very similar to max speeds currently reached by WRC cars (around 190 km/h, as shown in some long straights at different rally stages).

The test was developed with a moving ground. This is especially required for cars with small ground clearance, as is the case of current WRC cars. The reason is to ensure that the aerodynamic performance is established with a sufficient degree of certainty.

The video shows that the car is evaluated at different slip angles. This is also very important to reproduce the aerodynamics of rally cars when cornering, even at high speed. Angles from 0 to 15º are normally evaluated. Also notice, during the video, that the car and the ground yaw together, to make it even more real.

It is known that, as the yaw angle increases, drag and lift also increase, so car design needs to be modified to compensate for such negative effects. We will review how yaw conditions affect car performance and how current WRC car designs face such conditions in a future post.

The video also shows that car performance is evaluated at different pitch angles: from a neutral position under stable driving to negative angles while the car is braking. Surely positive pitch angles, corresponding to the car in acceleration have been also evaluated. Changes in pitch angle have also a very significant influence on aerodynamic performance: positive angles reduce the role of the front splitter, by allowing more air to enter below the car, while negative angles reduce the amount of frontal airflow under the car, but also allow more air entrance from car sides.

Aero engineers measure drag and lift forces in the wind tunnel, to evaluate the performance of the car under any circumstance. They also use visualization techniques: the video shows the use of a smoke generator, to visualize the airflow around the car at different points, to compare with the prediction from CFD, in order to validate the numerical results.

Any detail is evaluated in this kind of test: note that the impact of the light pod is also evaluated, even though it is rarely used during the Championship.

If you review again the video, you’ll notice all the different measurements above described. We should thank Ford Performance for showing us these images, as they give us an opportunity to better understand and explain how the aero tests are performed.

Citroën and Toyota have also released last year different videos showing the evaluation of their cars in the wind tunnel during the design process. In both cases, the tests were done with 40% scale cars, which is cheaper, but the results obtained have to be carefully evaluated.

The difference in size means that the conditions are not exactly the same. In aerodynamics, the same condition means the same Reynolds number. The Reynolds number is a non-dimensional number which includes the terms of length, velocity and fluid density in the numerator, and the fluid viscosity in the denominator. To keep the same Reynolds number when the size (length) is smaller, the fluid velocity should be higher, which means to use a wind tunnel with higher capacity (which is rare and very expensive), or to do the test with a fluid with higher viscosity (water could be used, but it is also rare). If not, the tests with scale models are done at different Reynolds numbers than in reality.

Results from tests developed at different Reynolds numbers have to be carefully analyzed, and some assumptions need to be done. Especially, when there is flow separation, results will differ from one scale to another. However, they can still give some useful information, if all these details are taken into consideration, and that’s why most teams still use them.

At the end of the Fiesta WRC aero test, M-Sport’s Head of rallying engineering Chris Williams declared to motorsport.com that much of the development work completed was for the longer-term, but admitted there would be shorter-term upgrades coming from the trip as well. According to this website, the Fiesta WRC is expected to return to Charlotte later this season to continue the use of Ford Performance’s development facility.  We will try to cover any new modifications from this and the next tests in future posts.

Update on June 4th, 2018: Latest news seems to indicate that a new aero configuration will be presented in Rally of Finland by the end of July. Some sources report that Sebastian Ogier has declared to AutoSprint that totally new rear aero package will be used in the land of 1000 lakes. We’ll have to wait until then to see if changes affect the rear wing, the rear diffuser, rear wheel arches or any other piece of the Fiesta WRC.