During the recently finished Rally of Portugal, all three Citroën C3 WRC cars driven by Kris Meeke/Paul Nagle, Craig Breen/Steve Martin and Mads Østberg/Torstein Eriksen used, for the first time, two different front splitters in the same rally. For the SS1, Lousada, a short superspecial with a mix of asphalt and gravel, the French cars used the asphalt version of the front splitter. 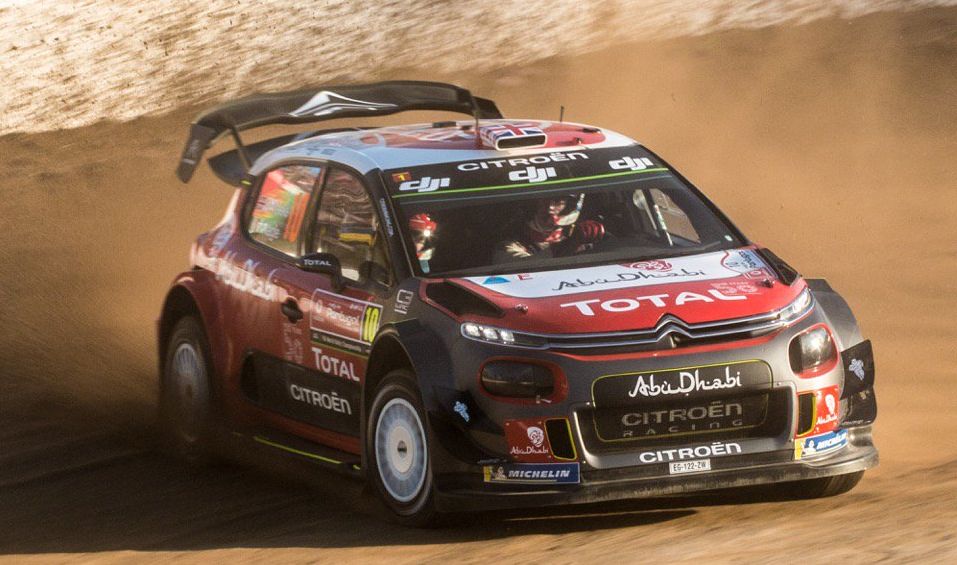 From SS2 to the end of the rally, all three cars used the gravel version.

Due to the roughness of gravel stages, the front splitter suffered different degrees of damage, up to the point of losing it (Østberg/Eriksen).

During the design of the car in 2016, two packages were designed, for asphalt and gravel. Each one included a different splitter design, at different heights over the ground to prevent it from being damaged. The gravel design was used in the tests since June 2016, while the asphalt version was first seen in the last series of preseason tests, developed in Southern France in December 2016.

The asphalt front splitter version was then used in the very first rally of the C3 WRC, the Rally of Monte-Carlo 2017.

In Sweden and México the team shifted to the gravel front splitter, as expected. But the same configuration was used for the remaining of the asphalt rallies of the season (Tour de Corse, Germany and Catalunya), as well as in Montecarlo and Tour de Corse 2018.

The asphalt version of the front splitter was only seen in some other tests carried out in 2017, such as those developed by Andreas Mikkelsen and Andreas Jäeger in Germany in August 2017, or by Sebastian Loeb and Daniel Elena in France in August 2017.

It was also seen in the last stage of Rally Catalunya 2017, in Stephane Lefebvre/Gabin Moreau car, probably due to the high number of incidents suffered by front splitters in this rallye, both in Friday gravel stages and on corner-cutting on tarmac stages.

Now that this configuration seemed to be finally discarded, it has been surprisingly reintroduced by the French team in the Rally de Portugal.

The main differences between the two splitter designs are that the asphalt version shows a thinner front surface (which means lower drag). That’s why stickers (Michelin and others) are located on top of the splitter, instead of in the front face as usual. The reason why the front face is thinner is that the car height is smaller in the asphalt version, so a smaller splitter is required to allow the same amount of air entering under the car. Although this does not seem to be the case in Portugal, as the car was supposedly in its gravel version all weekend.

Another difference is the elevated, central portion in the case of the asphalt version. It might be to protect the car when cutting in asphalt corners, but as long as the lower surface remains flat, it makes no sense. This is a difference versus the asphalt front splitter used in summer 2017 tests.

It is worth to remember that Citroën evaluated a third design, during the tests Loeb/Elena carried out on gravel roads in Spain in September 2017. This design has never been used again in any test or rally.

Whatever the design, the goal of a front splitter is to reduce the amount of air entering below the car. The smaller the amount of airflow, the higher the velocity of the air flowing in the space between the car and the road. And, as Bernoulli claimed, the higher the speed the lower the pressure, which results in a higher downforce generation by the pressure difference between the top and bottom of the car.

The use of the asphalt front splitter in such a short stage does not seem to correspond to a search for performance improvement, as no advantages have been identified to use it under the conditions in Lousada. Also, it is the first time the team changes the front splitter configuration during a rally. So maybe, in the end, it was just a matter of reliability or parts shortage. Next rallies will give more clues about the real reason.