The recent modification of the Ford Fiesta WRC before Rally of Finland has put the spotlight on the size of the louvered rear wheel arch extensions, in spite of other modifications, such as the big rear diffuser. Toyota was the first team to include such big appendices in the rear of the Yaris WRC, since its introduction in the Championship in early 2017. A few months later, Hyundai followed a similar path, in an attempt to give Neuville a better car before Wales Rally that allowed him to keep in the fight for the title. Only Citroën has escaped, for the time being, to follow such a trend. 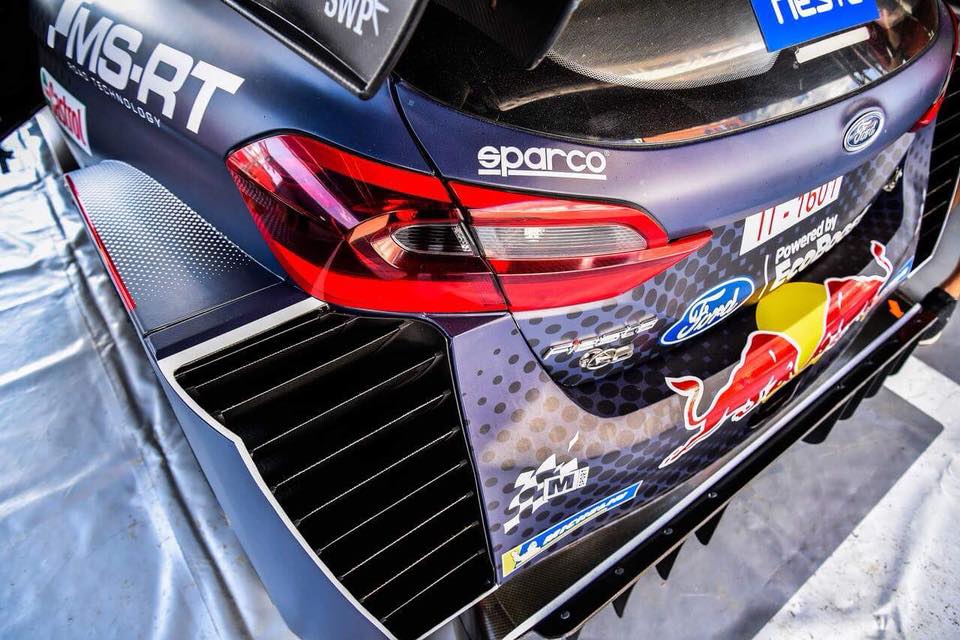 But what is their purpose, what are they designed for? The aim is to get rid of hot air coming from rear brakes and transmission without perturbing the aerodynamics of the car and, if possible, to take advantage of it to improve the car performance. How is this possible is what we’ll try to analyze in the following lines.

The cars of the current WRC generation are able to reach speeds very close to 200 km/h, and at the same time are able to stop at a very reduced distance, thanks to the state-of-the-art brakes they use (more on WRC brakes here). For the brakes to work in optimal conditions, adequate cooling is required. All new WRC cars have incorporated different inlets to allow a sufficient amount of air entering into the rear brake system, to keep brake temperature at the optimal range: Ford, Toyota and Citroen located the air inlet on the lower part of the rear door, while Hyundai’s is located on top of the rear door, as a NACA duct.

In all cases, all this air is sent to the brake package through a piping system, which directs the air into the required parts to be cooled. 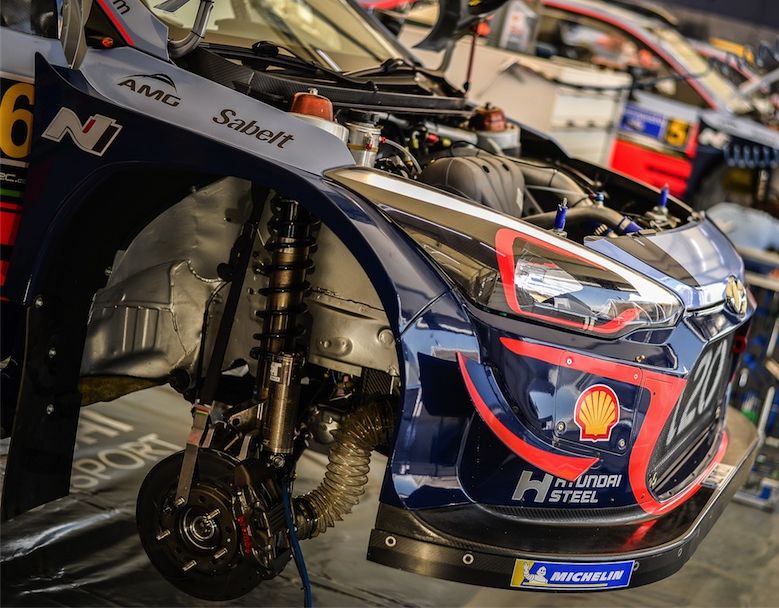 The amount of airflow which is impelled by rear wheels and brakes needs to be removed. If not, such a mass of hot air would increase the pressure below the car, thus reducing pressure difference with the upper side of the car, and by extension, reducing the downforce to be generated. One option would be to remove it under the car, by blocking the wheel arches, but this would have a negative effect on the underbody aerodynamics, and less downforce would be generated. Another alternative would be to let it flow to the sides of the car. But the interaction with the external, main flow would again result in a problem, in terms of aerodynamics: it would mean to widen the aerodynamic size of the car, which at the end represented an increase in drag.

The only other option is to send this airflow behind the car, where it is naturally directed by the wheels. And that is the purpose of the rear extension of the arches. Once taken this decision, let’s see how we can take advantage of it. 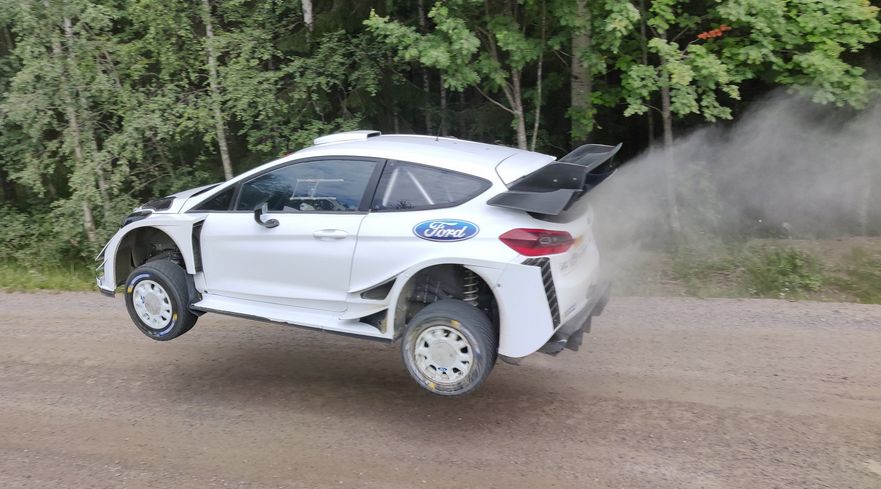 A rally car, as any irregular body moving into a fluid (air), generates a wake behind, where air velocity is smaller than in the free flow. The higher the velocity difference between the wake and the free flow, the higher the impact the wake has on the car. And impact means higher drag to the car. This means that a turbulent (irregular) wake, will have a worse effect on car performance than a smoother wake. So, the goal for the design of the fenders will be to avoid damaging the car wake and, if possible, to improve it.

The first thing to do is to calm down the flow: we need to stratify it, to orientate it into the required direction. This is the purpose of installing louvers: airflow is “cleaned” in the sense that is forced to flow horizontally, thus not contributing to making the wake more unstable.

By regulation, the tires cannot be seen through any of the openings, for what each louver profile must have 3 tangent points to the line of sight. The direction the airflow is sent at the exit will be set according to the most advantageous location. Behind the car, we can identify different regions, with the aid of @serallifi picture.

We can distinguish between three areas, with the aid of the dust:

– the upper zone (1), behind the rear wing, where no dust is present: this is due to the high-speed airflow generated by the rear wing and main flow above, that sweeps any dust particle,

– the bottom zone (3), also with no dust presence: airflow coming from under the car reaches the end of the diffuser at relatively low speed, but it speeds up again by the gases expelled from the exhaust (the exhaust blown diffuser concept), and dust is also quickly removed, and

– the intermediate region (2), where the presence of dust is evident: this is because airflow velocity there is low, and recirculation happens, as in any wake of an irregular body. 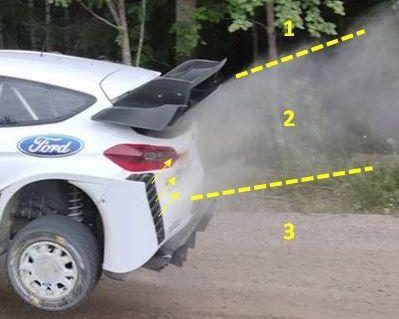 To minimize the drag caused by the wake, we need to accelerate the intermediate region, so there is where hot air from brakes is sent by the rear fenders. 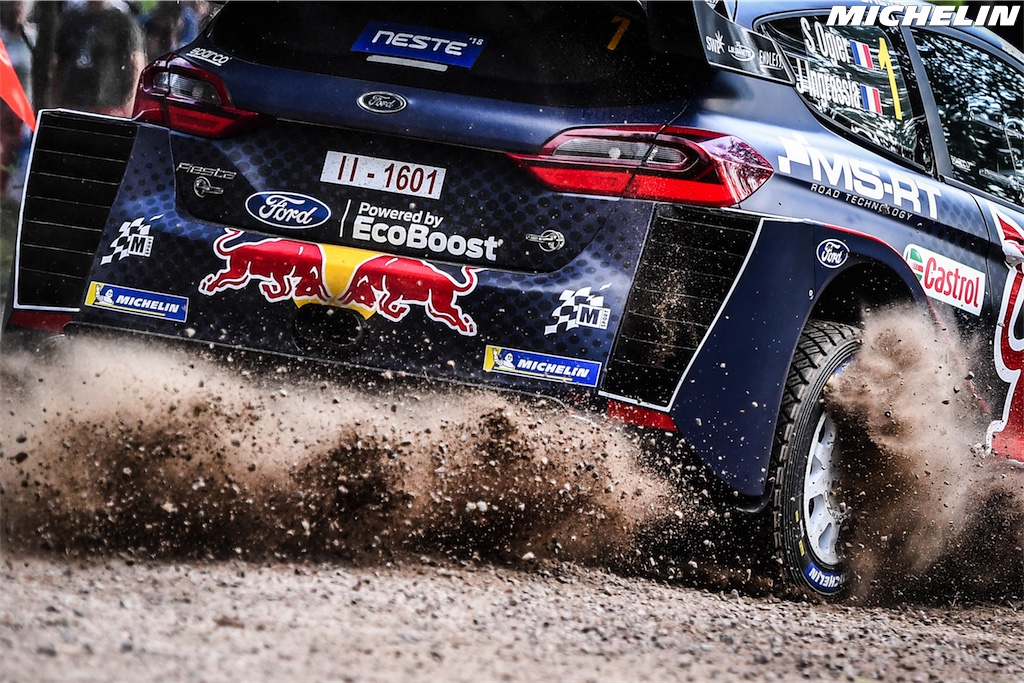 It is important to note (as shown in the picture above) that behind each rear wheel, a highly turbulent wake is generated, due to the interaction of airflow with the rotating wheel (visualized by dust and stones in the case of the picture).

This turbulent wake has a negative impact on the car drag, which can hardly be minimized. For this reason, existing extensions try to avoid sending the airflow behind the wheels: in the case of the Ford, they are oriented towards the center of the car, as closing sides seem to indicate.

During the Rally Finland, two of the lower louvers were blanketed, probably to increase the speed of air to be sent upwards, while generating smaller disturbance on the turbulent flow behind rear wheels. 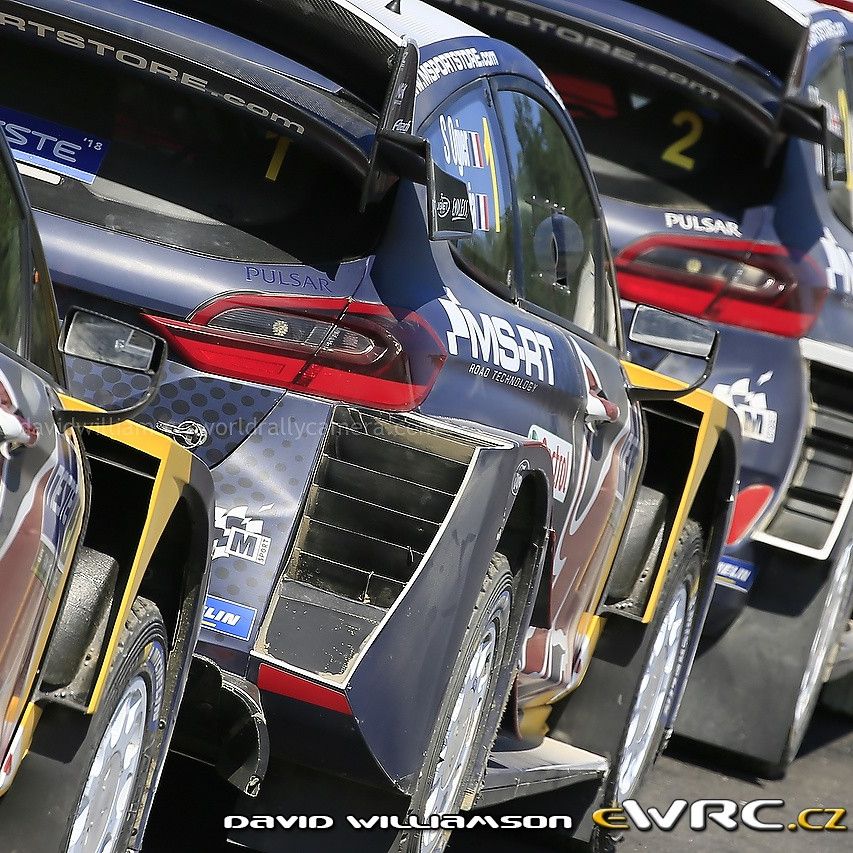 In the case of the Hyundai, the fender external sides are open, and they seem to be oriented to send the airflow to the external sides of the car. Louver’s exit is horizontally oriented. Apparently, this would also generate some drag, due to the interaction with the main, external flow. But probably they have identified other advantages to do so. 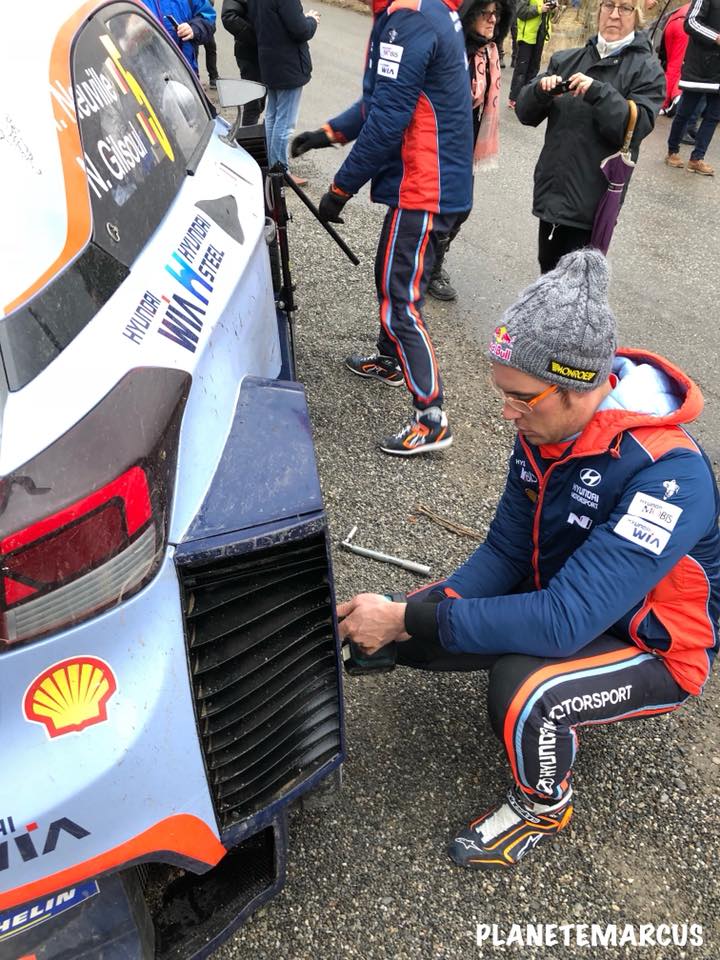 In the Toyota Yaris WRC, the rear fender louvers are designed to send the airflow upwards and to the center of the car, even though the slope of the external side is not as steep as in the case of the Fiesta. 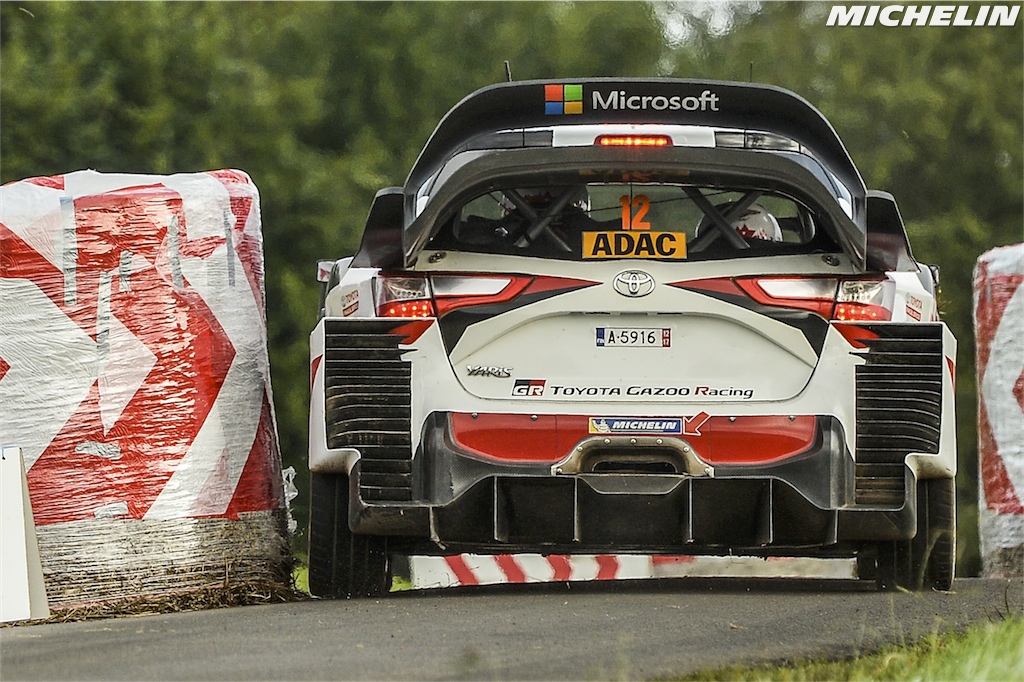 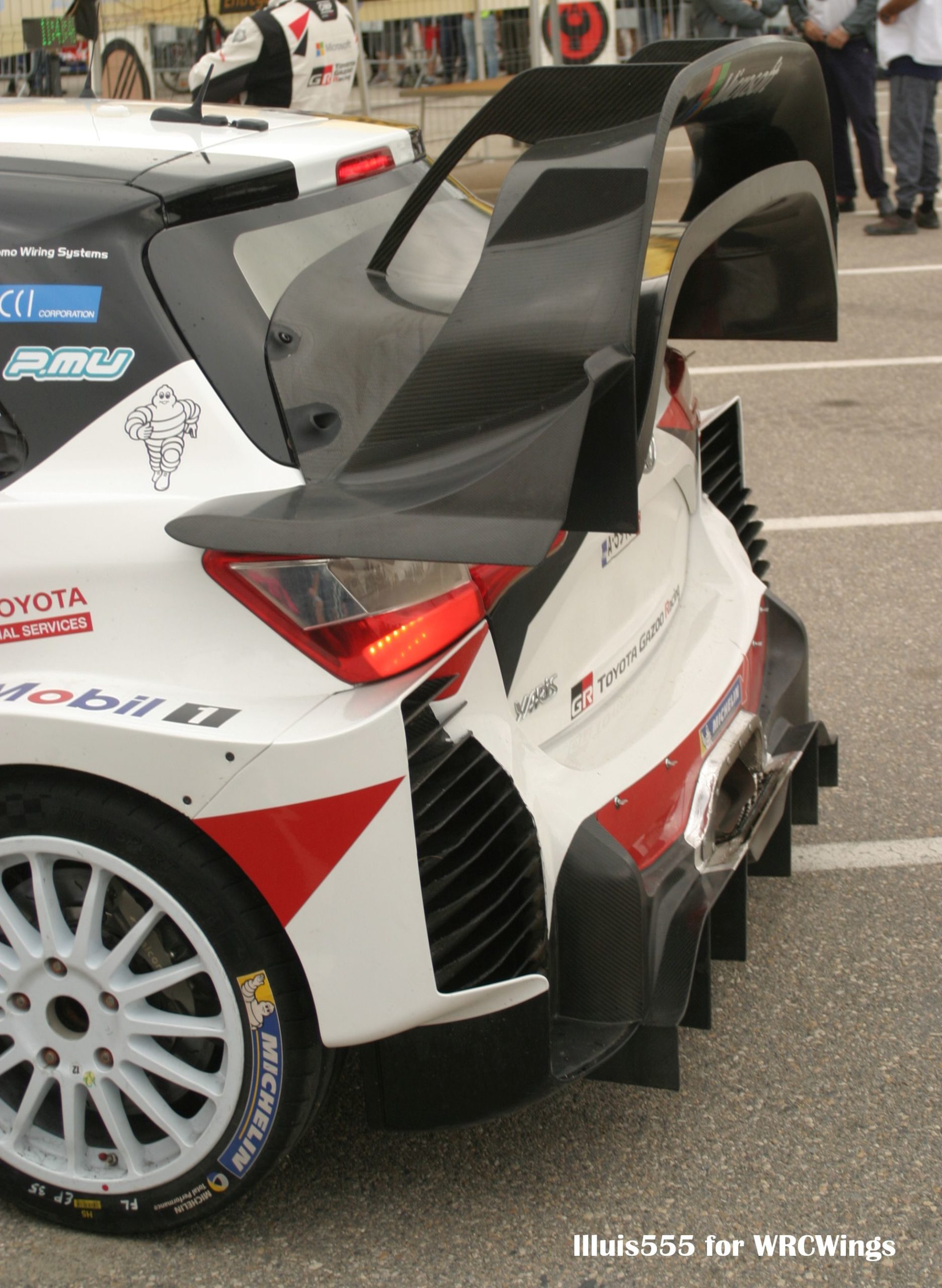 In summary, the improvement introduced in the new Ford Fiesta WRC rear fenders has supplied, to the new car:

Note the difference in size between the old (left) and the new (right) rear wheel arch extensions.

This is the second post we have devoted to the new rear aero package of the Ford Fiesta WRC introduced in Rally Finland 2018, you can read the other two here: