One specific characteristic of rally cars is that drivers make them slide when cornering, to better position the car for the next movement. By means of oversteering, rally cars reach high yaw angles, especially on rally stages developed on loose surfaces. Under these conditions, the higher the grip the faster the car can turn.

For this reason, aerodynamics when the car slides are very important, and engineers and designers devote great efforts to adapt the car to such condition, in order to give the driver a stable car with optimal grip.

When a WRC car slides into a corner, the direction of the airflow is different from that of the airflow facing a car in a straight motion, as it hits the car by one of its sides. The cars are mainly designed to face the airflow frontally, but they also include some modifications to minimize the impact of this change of orientation on the aero performances. As the rear of the car is the area more exposed to the side airflow when sliding, it makes sense that most of the modifications are concentrated there, and more specifically, in the rear wing.

All current WRC include endplates in their rear wings. Endplates are designed to prevent the mixing of high-pressure air from above the wing with low-pressure air from below, thus increasing wing efficiency. In a wing with no endplates, both streams would mix and the pressure difference would be smaller, as well as the downforce generated.

The Ford Fiesta WRC rear wing includes classical, vertical endplates, starting above the upper wing and completely closing both sides, right to the lower plane. In the endplates external side, smaller winglets with an additional, sloped endplate (painted in orange in the picture above) are added to generate downforce by using the airflow coming from the front part of the car.

In the case of the Hyundai i20 Coupé WRC, sloped endplates are designed as a prolongation of the upper wing, and they also partially close the space between the upper wing and the lower plane. Swan-neck supports are also used, while the endplate includes a small, horizontal lip at the bottom, possibly to contribute to additional downforce generation, similar to what Ford and Toyota obtain with their side winglets, but to a lesser extent.

The Toyota Yaris WRC rear wing also includes endplates as a prolongation of the upper wing, swan-neck supports and a side winglet similar to that of the Fiesta.

When the WRC car is sideways, a vertical endplate partially blocks the air trying to reach the wing, and the mass flow over the wing’s suction surface is reduced, leading to a decrease of wing efficiency, in terms of downforce generation. Also drag increases, as airflow faces now more obstacles than in straight motion.

Fiesta’s rear wing should be the less performant when sideways, as their endplates fully cover the space between the upper wing and lower plane, thus generating a bigger shadow over both planes. Toyota’s should be the second most affected, as their endplates also block the lower plane, but they are shorter than that of the Fiesta. In the case of Citroën and Hyundai, as endplates do not completely block the air entering into the lower plate, the efficiency loss should be smaller.

On the other hand, when the car slides, airflow impacting on endplates generates a high-pressure area on it and low pressure on the internal side. If the endplate is not completely vertical, part of the force generated by the pressure difference is oriented downwards, thus contributing to generating additional downforce. This is the reason why most of the current WRC cars include sloped endplates, except in the case of the Fiesta and Yaris inner endplates, as shown in the picture below.

Hyundai introduced a new rear wing on the i20 in the pre-event tests of Rally Catalunya’17, with the aim of improving its performance.

The second modification consisted of an enlargement of the wing supports, especially on the upper side of the wing. We’ll come back later to the benefits of such modification.

To also get advantage of the pressure difference to generate downforce, Ford and Toyota introduced sloped endplates on their side winglets.

In both cases, side endplates are sloped at angles of 20º approx., although in the case of the Toyota a second, lower portion with a higher angle was incorporated.

Another alternative to get advantage of the side pressure experimented by a car sideways is the use of vertical fins in the rear wing. With their big side area, they provide a large amount of lateral force in opposition to the yawing motion that helps to make the car more stable. But they also contribute to drag increase and lift generation: they act as flow dividers in straight motion, reducing the effective area of the wing, thus reducing its efficiency in downforce generation. 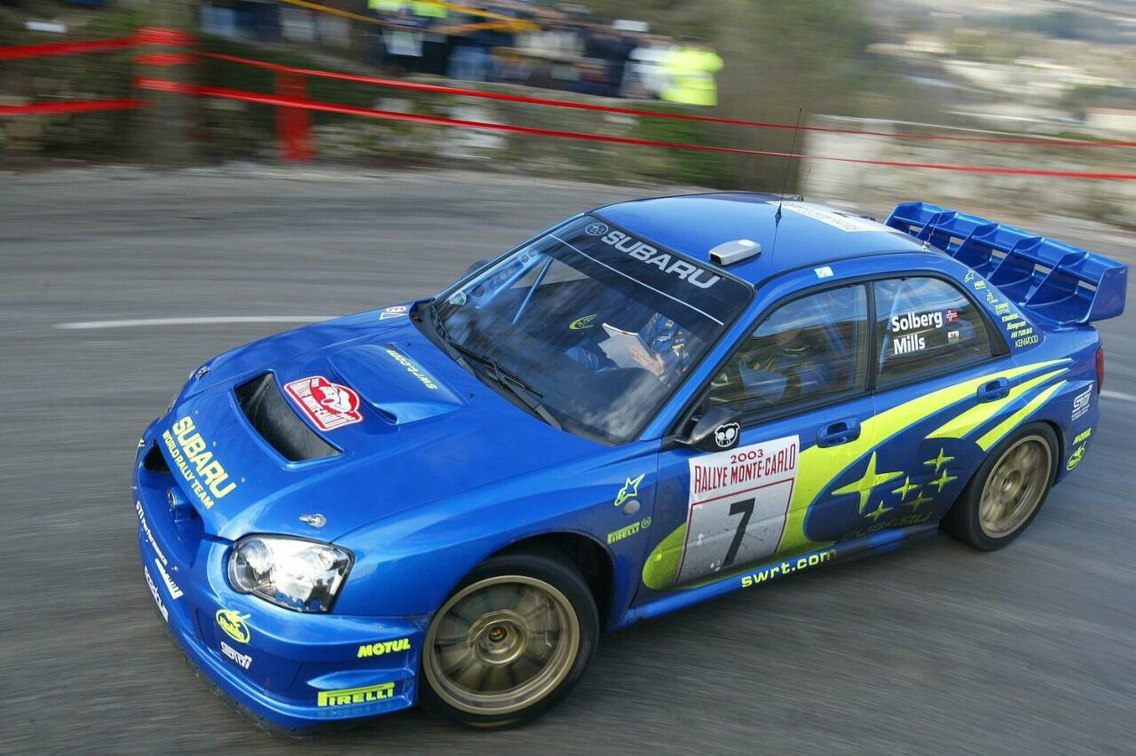 Widely used since its introduction in 2002 (in the upper wing of the Peugeot 206 WRC) and 2003 (across all rear wing of the Subaru Impreza S9 WRC), vertical fins were originally designed as additional endplates, to minimizing the mixing of air from the high-pressure side with the low-pressure side.

But Toyota, and lately Hyundai, found a smart way to add vertical fins in the central part of the wing in spite of the regulations, by using enlarged swan-neck supports.

This type of support has the advantage that it does not interfere in the space below the upper wing, as the support is attached to the wing only on its upper side. Below the wing is where low-pressure areas are generated, which are key to downforce generation. A smart design of the upper portion of the support which sits on top of the rear wing allows to convert them into vertical fins. Toyota included them in their original design, as shown in the picture above: A is the swan neck support (acting as a vertical fin) and B the additional vertical fin, introduced by Toyota, and whose location is limited by regulation.

The second modification introduced by Hyundai in Rally Catalunya 2017 consisted of an enlarged upper support. The original support sat only in a short portion of the upper wing, while the new support was prolongated up to the end of the wing, thus converting it into a vertical fin.

Citroën also included swan-neck supports into their original of the rear wing, although the supports extend only to half of the rear wing so they cannot be considered as full vertical fins. Maybe this is one of the potential improvements for their rear wing in the future if CFD and wind tunnel experiments confirm its efficiency.

The aero performance of a car sideways is also reduced at the front of the car, as front splitter and dive planes receive airflow in a different orientation than when the car is in straight motion, reducing their efficiency. But there’s less room for improvement there for the designers.

In summary, both downforce and drag are impacted on a car moving sideways, but designers have found different alternatives to minimize this impact and even to get advantage of such an adverse condition.

Further information on the aerodynamics of a rally car sideways can be found in the following references: