Wheels have a significant impact on the aerodynamic performance of any car, and also on WRC cars, in spite of being enclosed. It is commonly accepted that 30% of total car drag is caused by the wheels, so any improvement on that is really welcome. All manufacturer’s designers took this into consideration, to minimize its impact when they designed the current generation (2017-2019) of WRC cars. Each team took different actions, but all with the same purpose: to reduce the impact of wheels on drag and lift, while the rest of the car aerodynamics remained undisturbed, especially under the car. We intend to review these actions in the following lines.

The amount of air flowing under the car is small, due to the presence of the front splitter in all cars, for what air flows faster there. By Bernoulli, this means lower pressure, and this is how downforce is generated, by the pressure difference with the high pressure above the car, caused by the considerable bigger amount of air which is forced to flow over the car (as we already saw in a previous post on Underbody aerodynamics).

The air flowing through the central part of the undercar can freely flow towards the end of the car, with the additional contribution of the rear diffuser, that sucks air into the car’s wake (thanks to the sudden increase in area). But the air flowing on both sides of the car quickly face a turning obstacle, the front wheels. 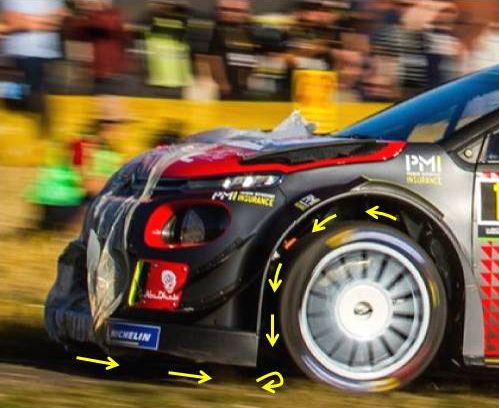 As J. Katz explains in his book Race car aerodynamics : designing for speed (see reference at the end of the post), air flowing against the wheels faces the air impulsed by the wheels during its rotational movement, and the interaction of both, opposite direction flows generates a significant amount of drag. It is the same in the rear wheels: the air coming from the turbulent, front wheels wake, faces again an opposite air flow current caused by the rotating wheel, and additional drag is generated.

So much drag needs to be minimized, and engineers have developed different solutions to achieve it. 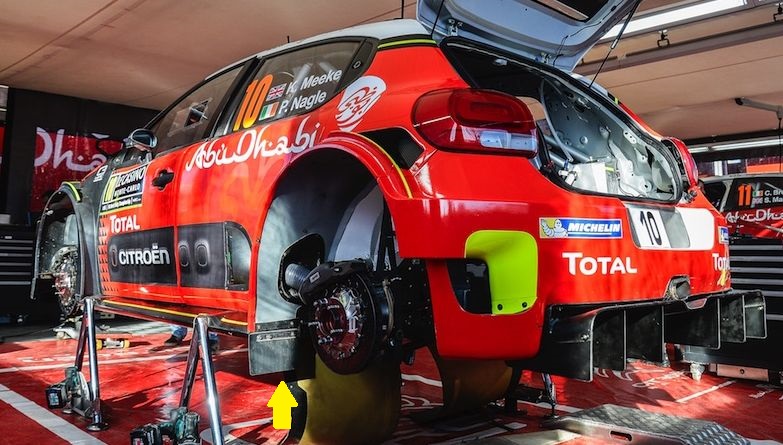 One alternative is to put an obstacle ahead of the wheel, to prevent air flowing under the car to interact with air flowing around the wheels. This can be achieved by the installation of a small deflector ahead of the wheel, under the form of a flap (same as mud flaps normally used behind the wheels, but, in this case, ahead of the wheel). This solution is used by Citroën in their C3 WRC in all tarmac rallies, as well as in fast rallies such as Sweden and Finland. They all have in common that, due to the regular road surface, the car can be set at a low ride height, and the presence of the deflector is really effective in blocking the pass of the air onto the rear wheel. Sometimes the blocking effect is complete, such as in the picture below, and all air is deviated to the sides of the wheel. 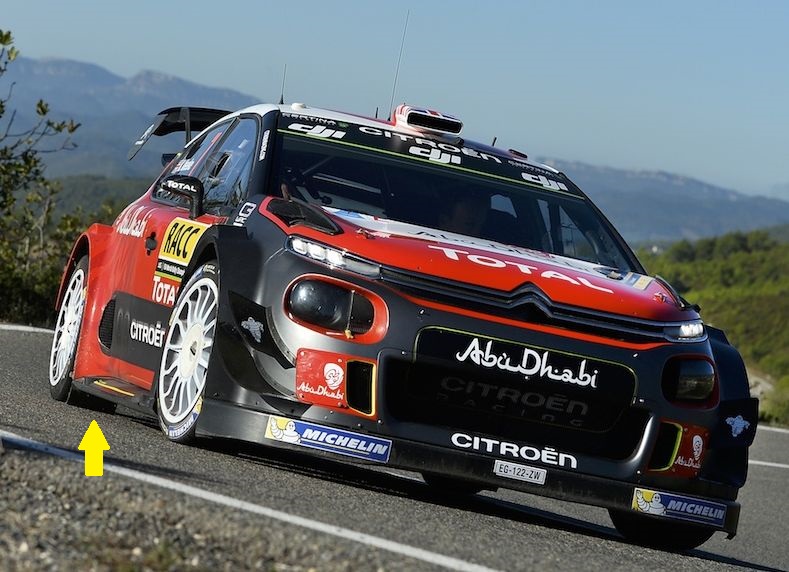 On most of the gravel rallies, where the car is raised to higher positions, the efficiency of the deflector would be minimal, so they are not normally used (as they are easily removable). Also, Citroën only uses it in the rear wheels, probably because the front splitter is so low that it has the same effect as a deflector (note that is higher on both sides than in the central part), and most of the air flows through the center of the car. 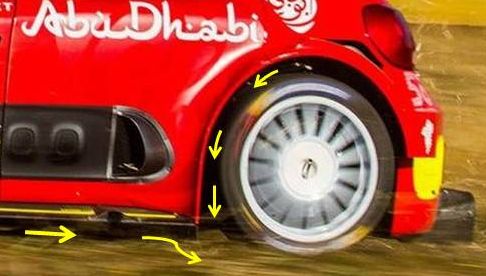 The goal of the deflector is to deviate front airflow towards both sides of the wheel, thus minimizing the interaction with the airflow around wheels, what reduces drag. But, at the same time, it provides an area for pressure increase, what is against downforce generation. So flexible deflectors are preferred, as they generate less pressure increase.

Ford also use deflectors ahead of the wheels, but both in front and rear wheels of the Fiesta WRC. The deflectors in front wheels are smaller in size, compared to those used in rear wheels, which is logical, as car ride height is lower in the front of the car. This makes really difficult to identify them on rally pictures. 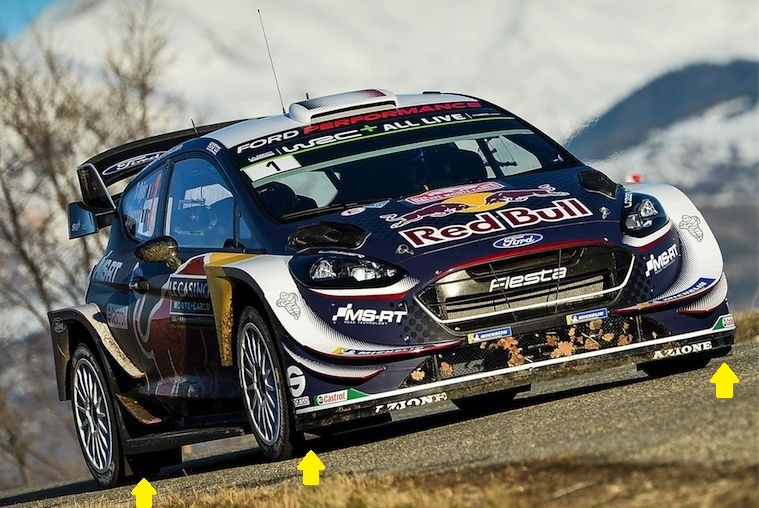 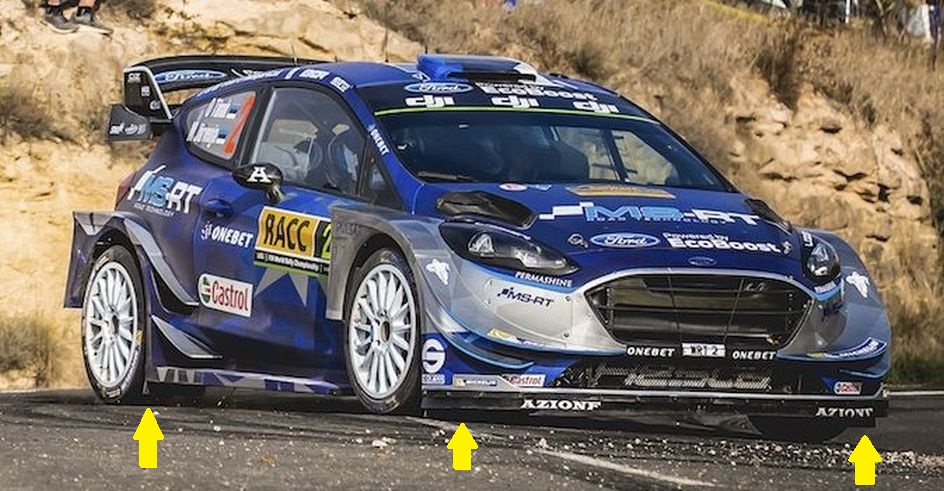 The size of the deflectors needs to be carefully evaluated during the design stage, as too big deflectors might cause additional drag. Also, they could generate lift, especially on front wheels, due to the pressure increase caused by their presence and the impact of front air flow on them.

A second alternative to reduce drag is to reduce the speed of the airflow reaching the wheel, so the interaction with the airflow around the wheel is smoother. The disadvantage is that reducing air velocity means reducing the downforce generated, but this can be compensated, depending on how airspeed is reduced. And Toyota and Hyundai designers found the way, by placing a small diffuser ahead of the wheels (known as wheel diffuser). Such as in the case of the rear (central) diffuser, its only presence causes the air to accelerate, towards a space with a higher area, which contributes to downforce generation as pressure is reduced. After the diffuser, due to the lower speed, the pressure is higher, but the interaction of air with the wheel is less aggressive, and lower drag is generated.

Toyota took this concept under consideration during the design of the Yaris WRC, for what side skirts were designed to host a diffuser inside. Although pictures show the size (height) of the diffuser is smaller than that of the side skirt. 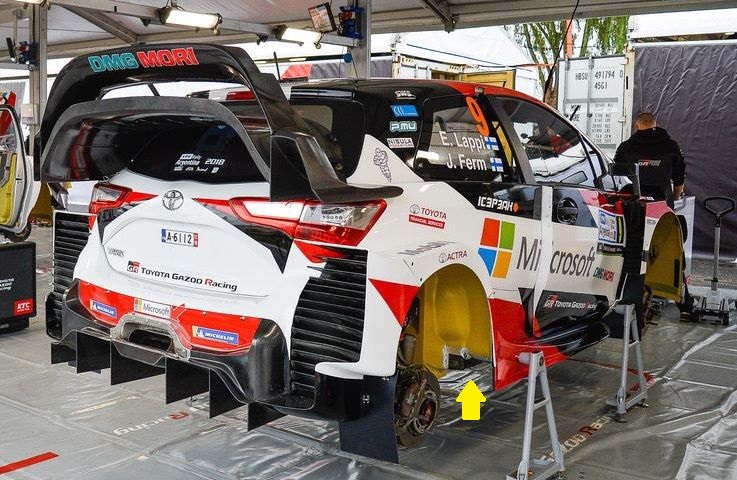 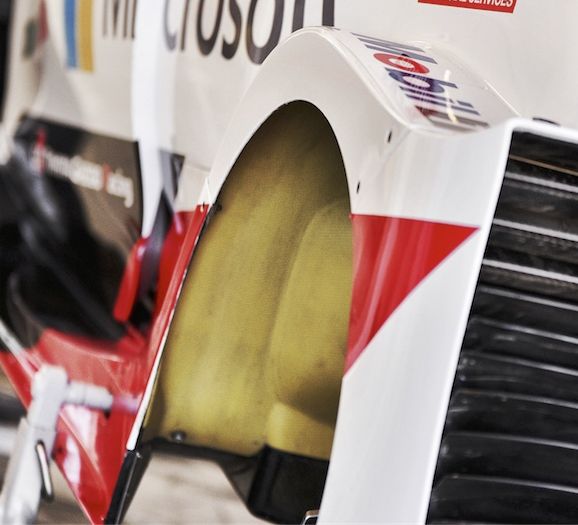 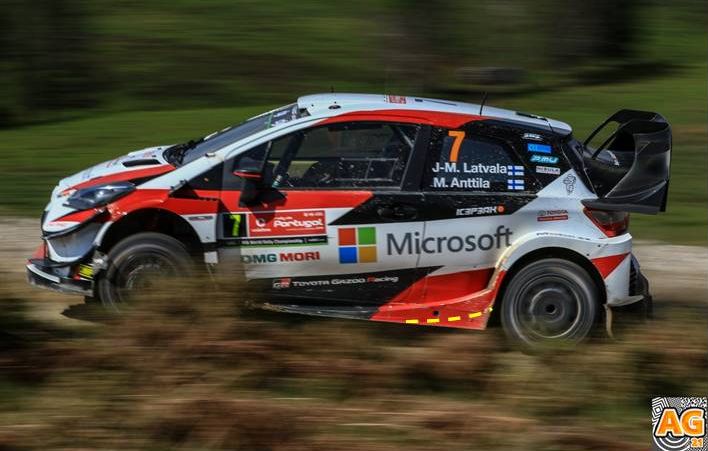 Also, Hyundai incorporated a small diffuser ahead of the rear wheels in the i20 Coupé WRC. Shorter than that of the Yaris, it requires a higher angle of attack to get the same effect. It seems to follow the same curvature than the end of the side skirt. 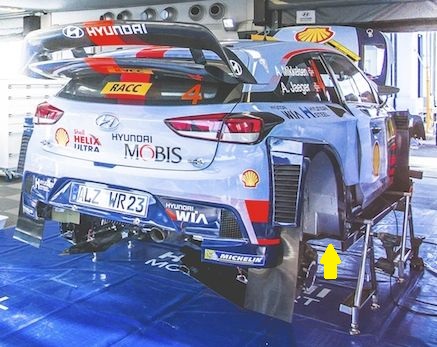 Due to the higher angle, Hyundai’s diffuser seems to send airflow to the top of the wheel, leading to a smoother interaction with the wheel airflow.

Comparison of both wheel diffusers shows that Hyundai’s have a higher ramp angle (curvature) and a lower length. 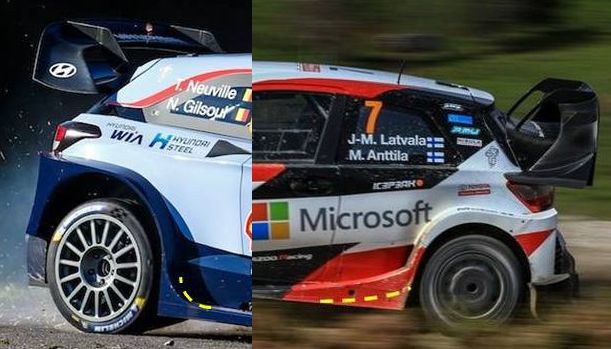 It is difficult to establish which configuration is more effective, as other factors, such as ride height and skirt sealing) are involved, and every car is different. However, it is commonly accepted that downforce generation increases with the angle, up until a value where flow separation appears (the flow does not follow the surface of the diffuser anymore), which results in a sudden decrease of downforce.

Both Toyota and Hyundai use this solution in all rallies, as they incorporated into the body design, while the flaps used by Citroën and Ford are installed only when required.

In the end, all teams introduced different solutions to minimize the drag generated in the wheels, by removing or minimizing the interaction of undercar airflow with the air dragged by the wheels during its rotation. Small solutions that significantly contribute to improving the aero performance of the current WRC car generation, and that have also been progressively introduced in the road cars we all use.