Since 2016, New Zealander Hayden Paddon has been combining its presence in the WRC with some participation in his home country, with full support from Hyundai New Zealand and his own team Paddon Rallysport.

As WRC cars are not allowed to participate in national championships, Paddon has got advantage of the technical regulations developed by MotorSport New Zealand (MSNZ) and the Confederation of Australian Motor Sport (CAMS), that allow the participation of the new generation of 4WD turbocharged rally car in both National and International events within the Asia Pacific region, inside a new category, named AP4, which is basically based on R5 cars without FIA homologation

The cars can be built locally or derived from cars of parallel design from overseas, of a similar specification and performance to that of the FIA R5 / S2000 Category cars, but at significantly lower cost. The engine must be 1.6, but due to the lack of competitive engines of this size available in the area, 1.8 and higher engines are allowed, inside the AP4+ category (further info available on this excellent article from Rallysport Magazine).

Based on this new regulation, the Hyundai i20 AP4+ was built with a 1.8 turbocharged engine. Its first rally was Ottago 2016, where he won all but one of the 17 stages. Since then, the car has contested most New Zealand Rally Championship events driven by Paddon and other invited drivers.

In 2018, Paddon has obtained at its wheel four victories out of four participations (Rallies of Ottago, Whangarei, South Canterbury and Coromandel), ensuring his fourth title in the NZ Rally Championship. The car includes some aerodynamic solutions derived from the WRC car. The most visible is the front dive plane, similar to those included in the 2017 version of the i20 Coupé WRC. Modified wheel arches and a bigger rear wing are also included.

In addition to the NZ Championship, Paddon has also participated in recent years in some other races, where technical regulations are less restrictive, such as the recent Ashley Forest Rallysprint. In 2017, a special evolution of the car was prepared for this event, which was named by the team as Barry the bastard, due to its 600 hp and improved aero. For the 2018 edition, the team has gone even further, with a very special version of the car, named as AP4++ (or Barry 2.0 by the team). As the same Paddon explains in this Paddon Rallysport video, the car includes significant modifications in the engine (2.1 turbo engine with almost 700 hp) and the aero package.

It is reasonable to think that the team may have received support from the Hyundai R&D center (located in Namyang, South Korea) or the Motorsport Center (located in Alzenau, Germany) for the design of the new aero. So, it is worth to review it, as it can also give us some clues about future trends in this subject, in spite of the more restrictive regulations in the WRC, especially for the new cars to be introduced in 2020.

The AP4++ car is not so developed as a whole as a WRC is, but it shows some details where designers have gone further than in the WRC. The main are the dive planes, the front wheel arches, the rear wing and the exhaust blown diffuser. As well as the engine bay air inlets and vents, which are bigger than in the WRC car, as the biggest turbo and the highest power engine for sure generate a lot of additional heat that needs to be removed.

The front splitter is thinner than that of the WRC, but it is modified in the center, in order to minimize damages when corner-cutting, similar to that of the unborn VW Polo WRC.

The dive planes in the AP4++ are bigger than in the i20 Coupé WRC, and they include endplates, in order to better channel airflow towards the sides of the car. Also, the side lips are higher than those used in the 2017 version of Hyundai i20 WRC. Lips were removed from the i20 WRC 2018 version, while the only team currently having lips on the external sides of the dive planes is Toyota in its Yaris WRC.

As we already reviewed in our previous post on dive planes, they contribute to generating a row of vortices that travel in parallel to the car, on both sides, which act as a barrier that prevents air from entering under the car, so that improving underbody downforce generation.

The upper dive plane sends the airflow on top of the front wheel arch, which had been already prolonged in the AP4+ car, in comparison to those of the WRC car. This design allows sending the airflow above the side mirrors, so the interaction is smaller than in the WRC car (which we already reviewed in our previous post on side mirrors). Note that the AP4++ still uses the original side mirror design, which makes sense as, due to the enlarged front arches, the main airflow circulates above them, and the channel created by the new design does not play such a significant role.

Thanks to less restrictive regulations, the rear wing of the AP4+/AP4++ is wider, allowing it to generate higher downforce due to its higher surface. To sustain such an increase in force, additional supports have been added to the swan neck supports also present in the WRC car. The new supports are only attached to the wing by its lower side, with no parts above it, so no additional vertical fins are included. This is one of the advantages of using swan neck supports, as we saw in our post on the aerodynamics of WRC cars sideways.

The rear diffuser of the car has been moved backward, to a more prominent position, with respect to the WRC car. The advantage is to send the air from under the car to the furthest position, contributing to a more homogeneous (less drag generating) car wake. It contains six vertical strakes, as in the case of the WRC car. 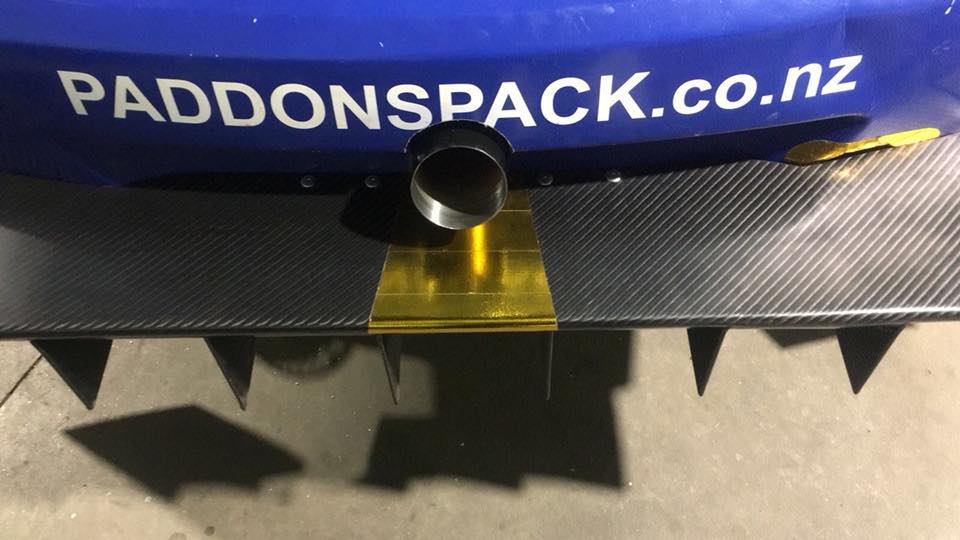 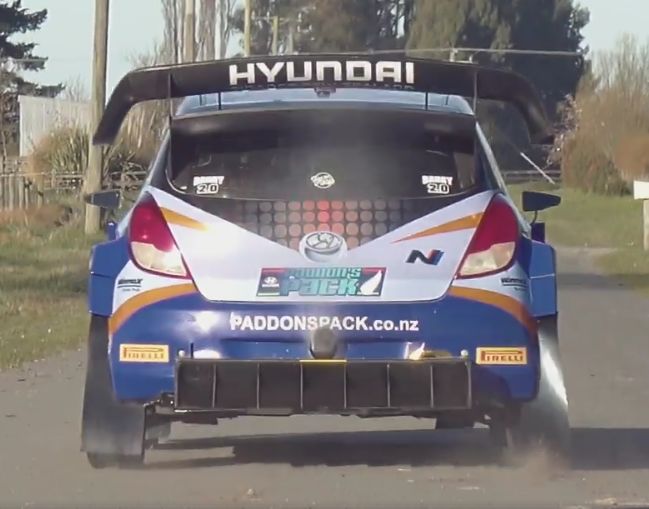 In summary, this car is an exercise on new aero modifications, some of them allowed by less restrictive technical regulations and some of them may be implemented in future versions of the WRC car. Combined with such a powerful engine, the car set the fastest times over the two-day event, but an oil leak on the top 8 run prevented Paddon from winning the event and beating the record of the 1.7 km rallysprint.