Updated on Nov. 15th with new engine joker for Neuville’s car, and on Nov. 5th with WRC car homologation info at the end of the post

Both 2018 Drivers and Manufacturers titles will be decided in the final event of the year, the Rally Australia, which will take place in two weeks. The three drivers still in contention for the title (Ogier, Neuville and, to a lesser extent, Tänak) will fight at the wheel of the cars from the three makes still in contention for the Manufacturer’s title (Toyota, Hyundai and, to a lesser extent, Ford), while Citroën drivers role can become decisive. How they all arrive in Australia in terms of aero progress during the year can help us to determine which of them is best prepared… even though it can’t be discarded yet that new modifications can be seen in Australia.

All modifications done to the cars, under the form of jokers or varian options (smaller modifications not requiring a joker), are registered and published by FIA in a document periodically updated that you can find here (last version from October 12th, 2018).

The Ford Fiesta WRC driven by Seb Ogier in Rally Finland presented significant aero modifications. Two jokers were spent to introduce a new rear diffuser and a new rear bumper, in order to improve rear downforce, at the cost of generating higher drag. Translated into performance, this means to gain speed while cornering at the cost of losing speed in the straights. M-Sport technical consultant, Massimo Carriero, provided more info about development work in an interview by Martin Holmes for Rallysportmag.com last August. 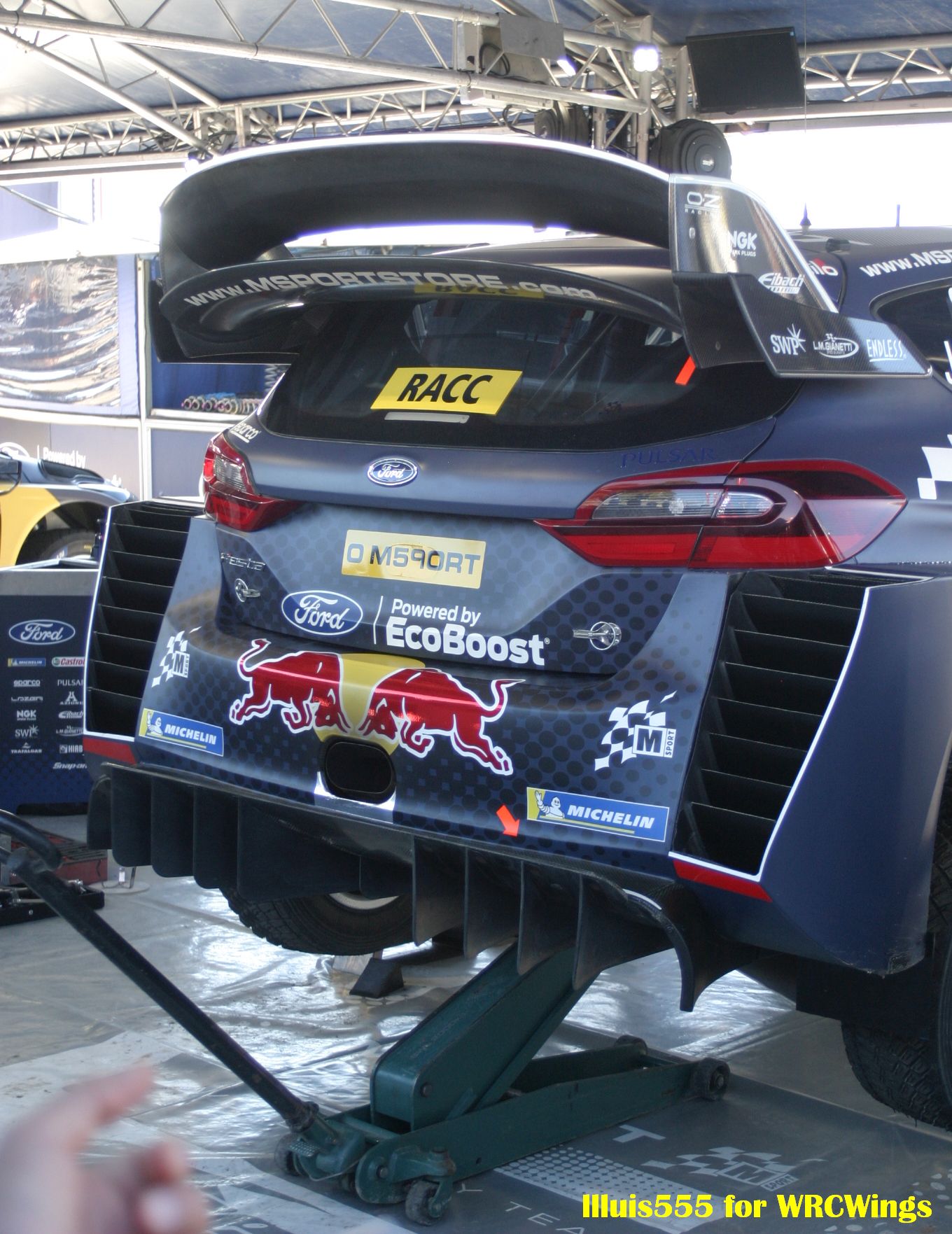 These modifications were introduced in just one chassis, what allowed Ogier to use an older chassis with the original aero in the gravel of Turkey, where aerodynamics are not so important (as the car is elevated with respect to the tarmac configuration, losing capacity of downforce generation) and the risk of damaging it is high. After Finland, the new aero package was also used in the tarmac of Germany and Catalunya, but it has to be confirmed yet whether it will be used in Australia or not.

Ford also introduced new side mirrors in Finland, after using them in several pre-event tests, as well as in the shakedown of Rally Mexico.

A third joker still remains in the hands of M-Sport. According to Racecar Engineering November’18 issue, M-Sport Technical Manager Chris Williams came back to the US in September to evaluate new aero modifications in Windshear wind tunnel, together with Ford Performance engineers. But they were probably most concentrated in the new engine spec.

In spite of the importance of what is at stake in Australia, it is improbable that the team takes the decision of introducing another aero modification there. It is a gravel event, where aero plays a minor role, compared to tarmac rallies, but most importantly, the lack of time for an extensive test program to confirm the benefits of the changes plays against it. In any case, we will have the answer next week, when M-Sport has programmed his Australia pre-event tests.

The aero of the Hyundai i20 Coupé WRC remains unmodified for the whole 2018 season. The only (minor) modification introduced was the replacement of side mirrors, to improve airflow on both sides of the car. The result was a reduction in drag and an increase in downforce, due to higher airflow reaching the rear wing sides. But this is considered a minor change and no homologation (joker) is required.

In 2018, Hyundai has used one chassis joker to improve transmission in Finland and the second one on rear suspension modifications in Germany, while additional changes on suspension and transmission were homologated before Rally Catalunya, in order to improve the car behaviour on tarmac. But these were only a variant option (VO), so no joker was spent. The modifications in the aero package were already introduced during the last events of the previous season (Catalunya and Wales) while Thierry was fighting with Ogier for the Driver’s title, so no joker has been required for the aero package in 2018.

These modifications, affecting both the front (by removing one dive plane) and the rear (with a new wing design, modified wheel arches and modified bumper), were oriented to improve car balance. And they proved to be efficient, as, with these modifications in his car, Neuville won eight stages (out of 19) in Rally Australia 2017, to finally win ahead of Tanak, Paddon and Ogier. And, in the present season, they have allowed the Belgian driver to get two of his three wins on gravel (Portugal and Sardegna). Based on that, the i20 Coupé WRC is expected to be as performant in Australia as it was in 2017.

Hyundai World Rally Team Principal, Michel Nandan, already explained in January to Martin Holmes, in an interview to Rallysportmag.com, that only fine-tuning in the aero package was expected for the current season, but not significant modifications that would require any joker.

Updated on Nov. 15th: final Hyundai’s decision has been to use one of their engine jokers to improve power and torque in Neuville’s car, in order to help them win the battle for the title, according to Autosport information. This is a new-spec engine initially planned for 2019, but which has been introduced in advance as tests have proven its efficiency and reliability.

The Toyota Yaris WRC incorporated modifications in his front aero package since the very beginning of the year. On one side, in the front bumper, the cooling inlet design was modified and a second dive plane was added.

In the front wheel arches, a winglet was added on top while air vents size was increased for better air and heat removal. As a result, better cooling and improved downforce at the front of the car, in pursue of a better car balance. Results from Tänak in the last five events, with three wins and two more lost by bad luck, confirm the effectiveness of these modifications, even at the cost of two chassis jokers. Toyota Gazoo Racing’s rally technical director, Tom Fowler, provided more details on the team’s Yaris WRC work before the start of Tour de Corse 2018, in an interview with Martin Holmes published in Rallysportmag.com.

After having cooling issues again in Mexico this year, the team has continued working on the improvement of the cooling system throughout the year, which has significantly contributed to Tänak’s win in Turkey. But no other jokers have been spent on that subject.  The third chassis joker is still available, and although it was rumored that is was going to be used in transmission improvements, no further modifications are expected for Australia. 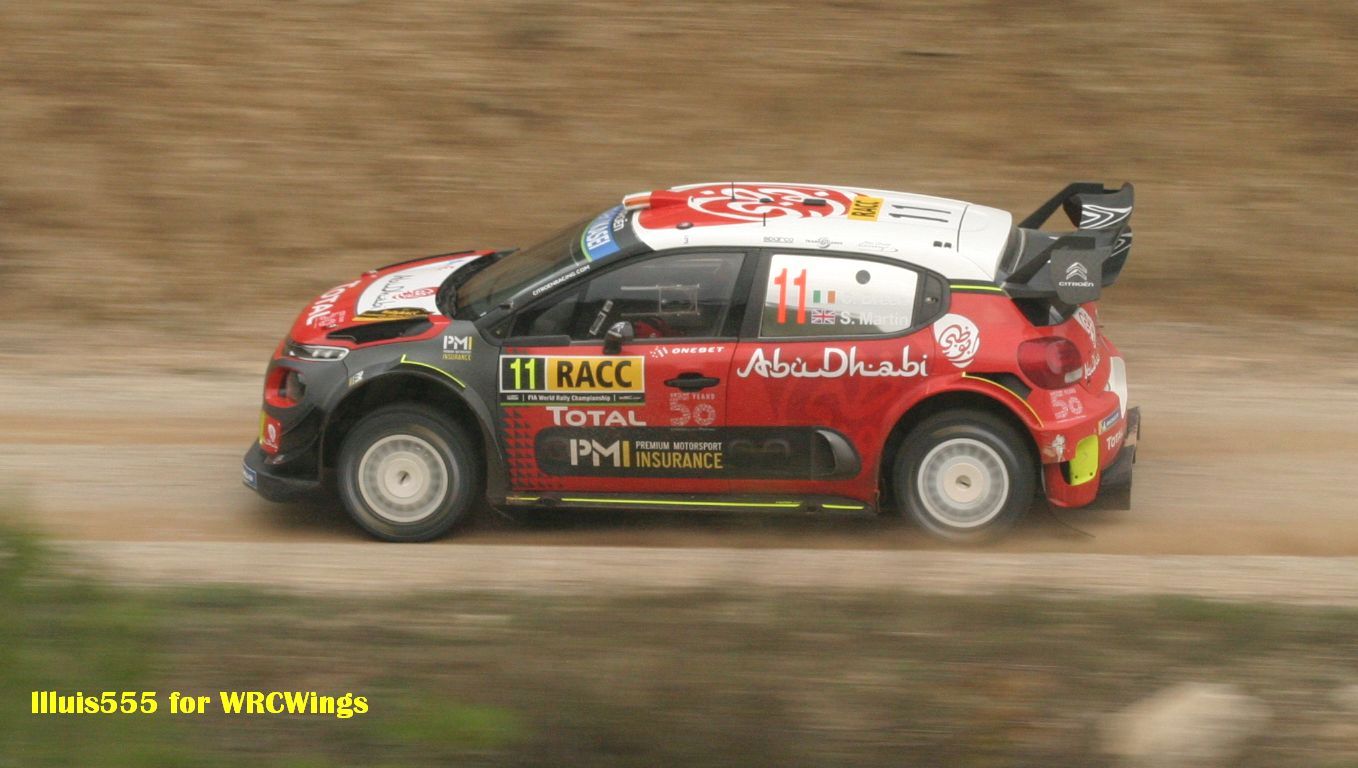 Citroën is the only team with no implication in the fight for the titles, but the recent win of Sebastien Loeb in Rally Catalunya and the fact that it might be the last outing for Breen and/or Østberg at the wheel of the Citroën C3 WRC, are important enough reasons for the team to fight for the glory in Australia.

2018 has been a complicated season for the Velizy based team. The year started with a new Team Manager, Pierre Budar in replacement of Yves Matton. Then, Christophe Besse left in March, and the team remained four months without Technical Manager until Olivier Maroselli (previous C3 R5 project manager) was named in August. Also, the sudden dismiss of Kris Meeke altered both the team composition and the development program.

The team has spent two chassis joker to improve one of the car main problems, according to drivers, the car suspension: a new evolution of its rear axle, to widen even more its window of use was introduced in Argentina, and new front arms in Finland. The new package proved to be effective immediately, allowing Mads Østberg to complete an excellent Finnish event to finish second. Still, a third joker is available, but it is improbable that they use it while they are waiting for the arrival of Seb Ogier to the team, who might ask for additional car modifications since he starts testing, hopefully in December.

Another modification introduced by the team since Monte Carlo, but joker-free, was the new, stronger strakes in the rear diffuser, to make them more resistant and less flapping.

All teams have been working on the constant evolution of their cars during the whole season, so the car configuration should be optimal for the last and decisive Rally Australia. Now, drivers ability, road orders and probably some luck will do the rest, to define the new world champions.

And very soon after the end of Rally Australia, it is expected that the interseason test series starts. New modifications will be evaluated, in order to improve the cars for the 2019 season, with three additional chassis jokers to be spent. Next is the last season before a new full car homologation is allowed in 2020. And we will continue to review them, as usual.

All current generation of WRC cars was homologated by FIA in December 2016, so that homologation was valid since January 1st, 2017. The homologation of the Variant kit WRC 2017 is known as 400/01 for all cars, and it is valid till the end of the year 2024.

1. Body openings, which are only allowed for the cooling of:

7. Front bumper and lower (removable) part, although air ducts and mountings are excluded

8. Rear bumper, openings and louvers (VO), although wheel visibility and mountings are excluded

9. The rear diffuser and rear protection

VO means variant option, affecting to parts that have to be homologated but do not require the use of a joker.

On the contrary, those parts impacting on car aerodynamics whose homologation is not required and can be freely replaced are:

There are different types of homologations:

ER – Erratum: replaces and cancels an incorrect piece of information previously
supplied by the constructor on a form.

VF – variant supply: two suppliers providing the same part for the manufacturer and the client does not have the possibility of choice.

VP – production variant (supplied on request and available from dealers).

ET – evolution type: modifications made on a permanent basis to the basic
model (complete cessation of the production of the car in its original
form).

Use of variants: the competitor may use any variant or any article of a variant as he
wishes, only on the condition that all the technical data of the vehicle, so designed, conforms to that described on the homologation form applicable to the car, or expressly allowed by Appendix J.

Each homologation is identified by the combination of two numbers: 4XX / YY

4XX meaning the total number of homologation, starting from 400

YY is the number of homologations of the type (ER, VO,…)

According to this numbering system, and based on the latest Homologation list published by FIA  (dated 12.10.2018), these are the number of homologations done by each manufacturer since January 2017:

The Fiesta (A 5770) is the car with a higher number of homologations, 41, distributed in:

The other two cars have received 32 homologations. In the case of the Hyundai i20 (A 5768), distributed in

while the distribution for the Yaris (A 5771) is as follows: