The Škoda Fabia R5 is the most successful car in the motorsport history of Škoda Auto. It was the successor to the Fabia S2000, which had won almost 50 national and international titles. Based on the Fabia III, it was required to use a mass-produced 1.6-liter turbocharged engine, according to WRC2 regulations, but such an engine did not exist at that moment in the VW’s portfolio of engines. So they had to start from the 1.8-liter, 123 kW EA 888 engine, (produced in Shanghai) and reduce its capacity to a 1.6-liter, which was allowed by regulation.

The aerodynamic package of the Fabia R5, designed by Fabia’s Aerodynamic Development Leader Michael Sumec and his team, includes a front splitter, extended wheel front and rear wheel fenders, small side skirts, a rear wing and a very simple diffuser. For the internal airflow, two central air inlets allow enough cooling air for the engine bay (upper) and the radiators (lower), while air vents on both sides of the bonnet allowing the hot air removal. 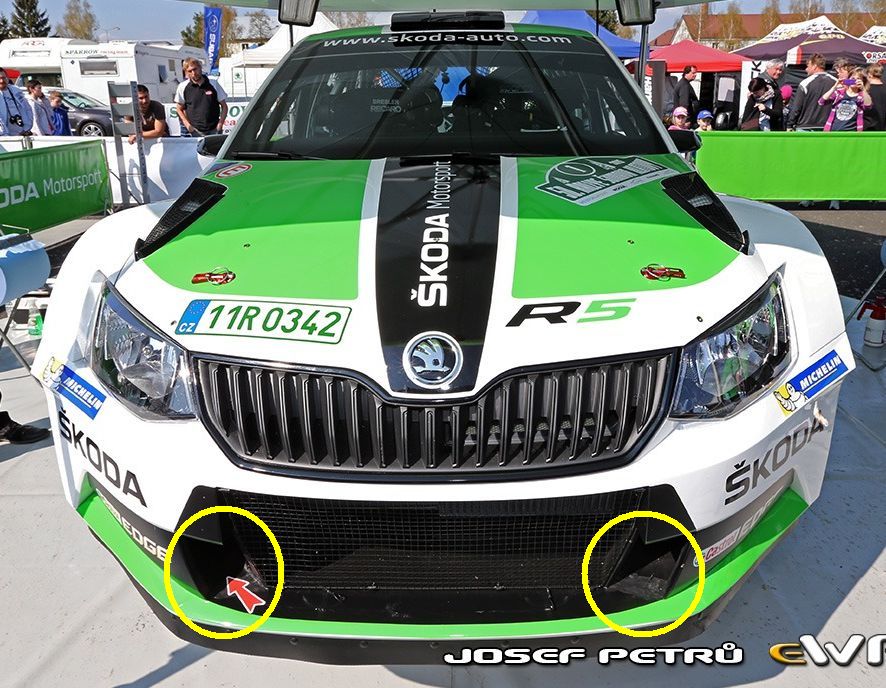 Small holes on both sides of the lower inlet (inside yellow circles in the picture above) allow sufficient airflow for brake cooling, by means of a pair of tubes that send the air directly to the brake discs, as shown in the picture below. 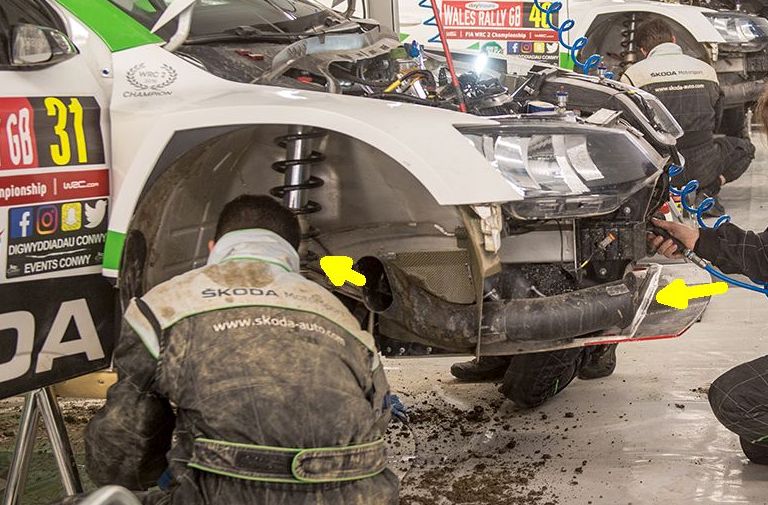 There are also two small vents located ahead of front wheels (see picture below), from where hot air from the engine bay is released, and it is directed backward, in parallel to main airflow, similar to those of the Peugeot 206 WRC.

Note the cut in the lower part of the rear fenders, ahead of the wheel, which allows air flowing by the sides of the car to interacting with the wheels, which is probably a cause of drag. But, even so, it was included in the final design, probably because there is a higher benefit in terms of downforce. Also rear of front fenders have the same cut, but it is hidden by wheel mud flaps. 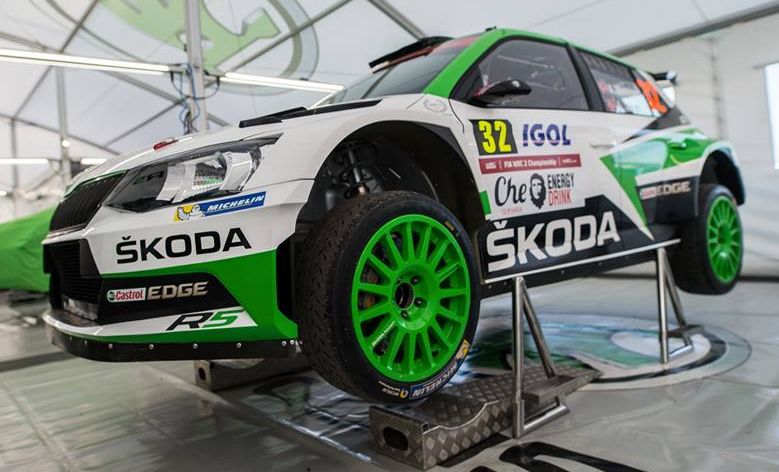 The front splitter is smaller in height compared to that of a WRC car, but still is effective in reducing the amount of air flowing under the car, what results in a higher speed airflow, thus contributing to downforce generation due to lower pressure under the car (by Bernoulli).

The side skirts and the diffuser at the rear end of the car, although simple in design, also contribute to the same effect, that is, preventing air entering from the sides of the car (the skirts) and speeding up airflow under the car to reduce the pressure (the diffuser). Note that the exhaust gas is located in the center of the diffuser, in order to better use the energy of the gases, by accelerating the air coming from under the car. It is a simple model of the exhaust blown diffusers also used by the big brothers, the WRC cars.

The rear wing dimensions and location are limited by regulation to the width and height of the car. The design of the Fabia R5 wing was developed in collaboration with ICON, a company specialized in CFD simulation for automotive aerodynamic. As usual, CFD results were validated in the wind tunnel and in stage tests. Due to the lack of wind tunnel in Škoda facilities, the tests were developed in the Volkswagen’s WK1 wind tunnel, located in Wolfsburg, Germany. It is a wind tunnel at scale 1:1, but with no moving ground, built in 1965.

The final wing design includes swan-neck supports, which have the advantage of supporting the wing from the upper side, thus allowing a clear flow under the wing, which contributes to more effective downforce generation. It has also small, vertical endplates, in order to increase wing efficiency by preventing the mixture of high-pressure air from above the wing with low-pressure air from below. Finally, a small lip at the rear of the wing is included, working as a Gurney flap to increase the downforce generation effect.

Jan Kopecký, Esapekka Lappi (FIN), Freddy Loix (B) and Raimund Baumschlager provided valuable input during the development of the new rally car. About 10,000 kilometers of testing were completed on a wide range of roads and conditions, including in the Czech Republic, Austria, Germany, Italy, France, Greece, Spain and Finland.

The car concept was first shown in the 2014 Essen Motor Show. And, after 15 months of car development, homologation was issued on April 1st, 2015. Only 15 days later it was presented to the International Press in the Czech Republic, and soon after the car faced his first race. It was in the Czech Rally Šumava Klatovy, in mid-April, with Jan Kopecký at the wheel, who drove the Fabia R5 to a clear victory, with a minute and a half of advantage over the pair Bouffier/Moreau, who were driving a Citroën DS3 R5.

The debut in the World Rally Championship of the Fabia R5 Rally Car took place in Portugal in May 2015, with Esapekka Lappi and Pontus Tidemand as official drivers, being part of the official ŠKODA Motorsport Team, with Michal Hrabánek as the Team Principal and Pavel Hortek as the Team Manager. The pace and reliability of the Fabia R5 allowed Lappi to finish second and Tidemand third, behind the Ford Fiesta RRC of Nasser Al-Attiyah, and, more important, confirmed the excellent potential of the car. 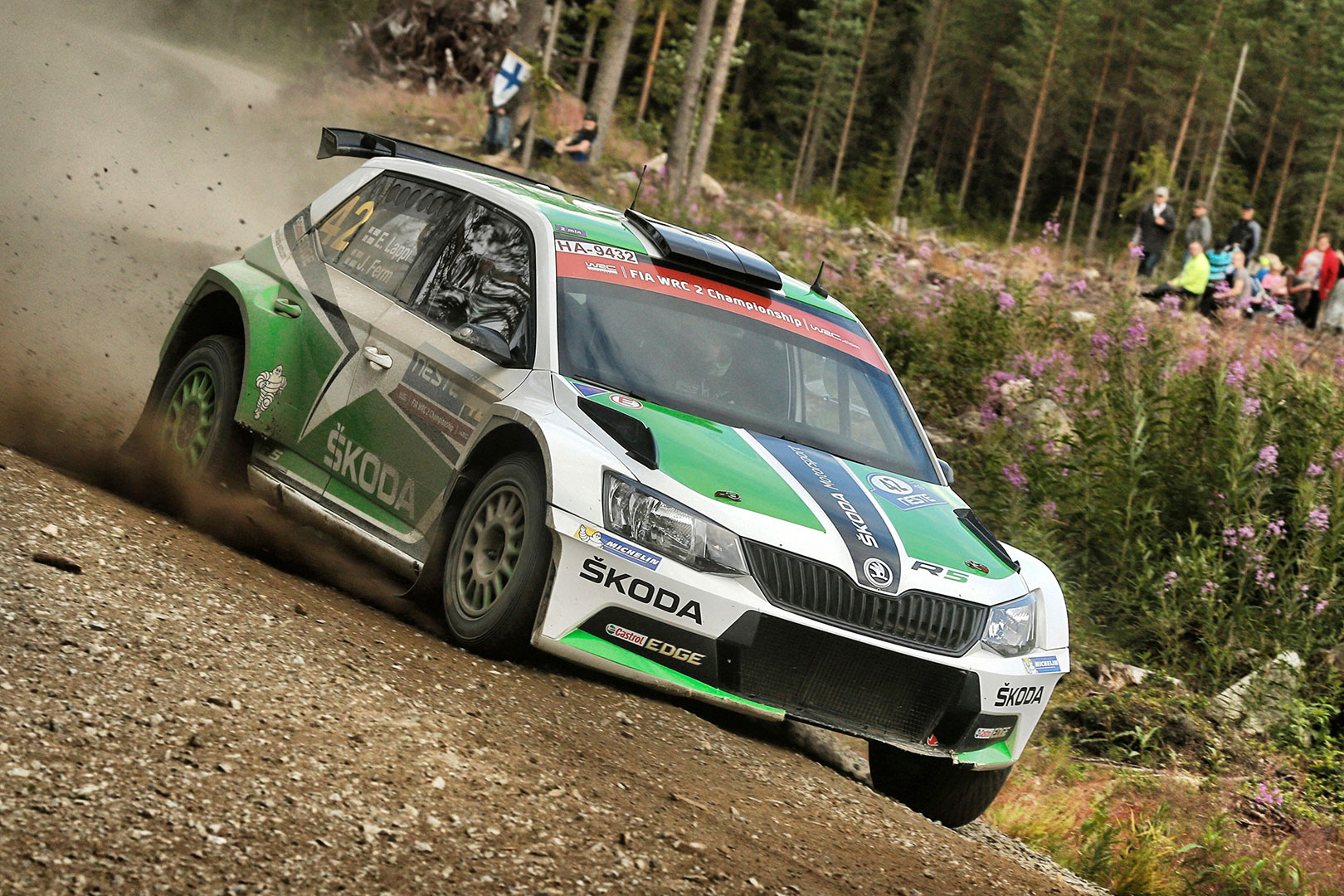 After a third place in Sardegna by Kopecký, the Fabia R5 obtained its first world class win in Poland, with Esapekka Lappi, who repeated on top of the podium in Finland, while Kopecký was first in Germany and Tidemand in Catalunya.

The only win that escaped to Škoda in the events they officially took part was in the Tour de Corse, where Lappi finished second behind Jules Maurin (Fiesta RRC). In spite of such a brilliant second part of the season, the title was for Al-Attiyah, who drove a Fiesta RRC for most of the year, but he turned into a Fabia R5 for the asphalt events of Germany and Catalunya, in order to save the title from returning Lappi. 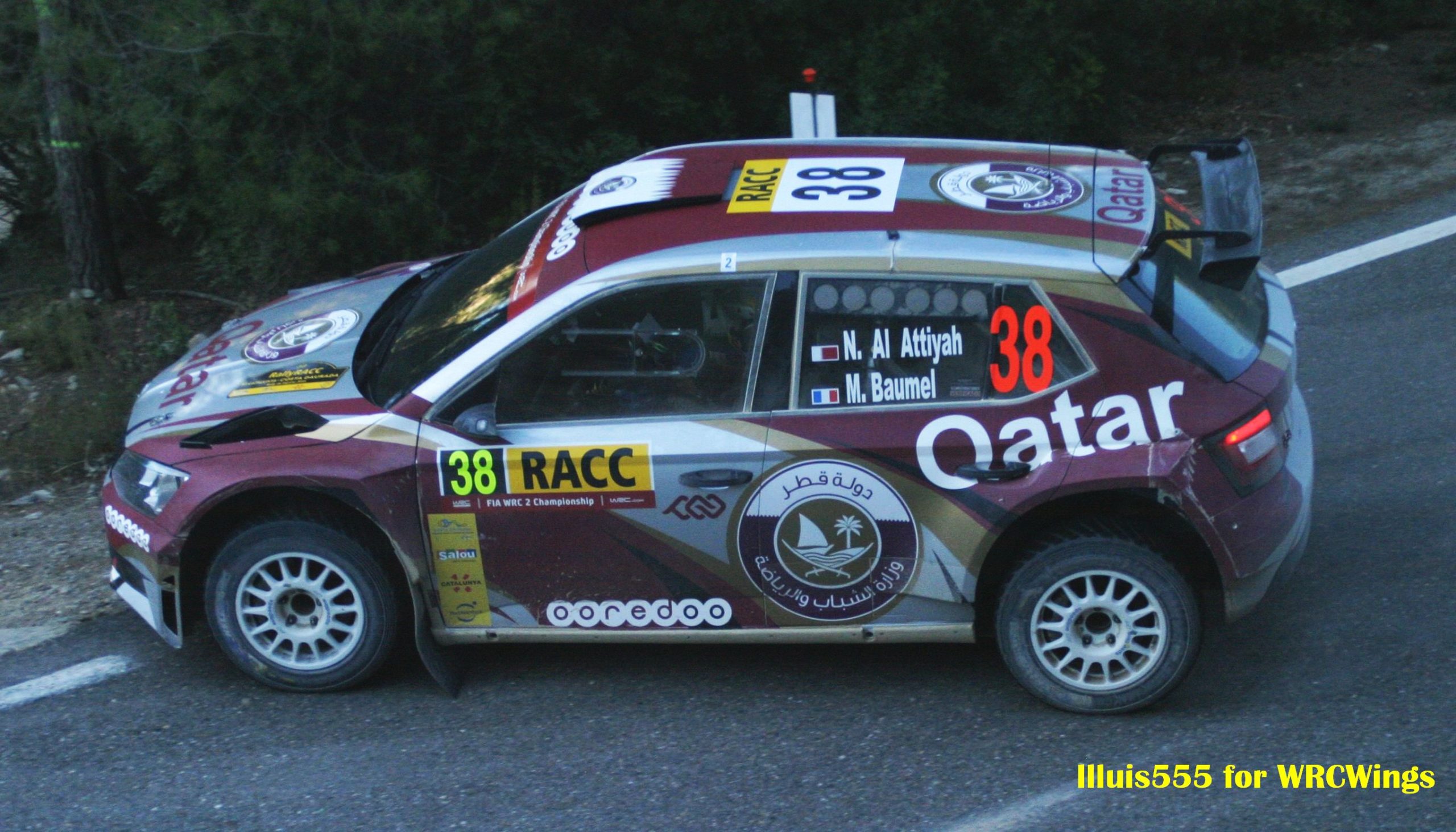 In the WRC2 Championship, Lappi finished in third position, with Tidemand fifth and Kopecký seventh.

For the season 2016, the Škoda Motorsport team counted again on Esapekka Lappi, Pontus Tidemand and Jan Kopecký as official drivers. But, due to the success of the car in terms of sales, the Škoda works team had to compete not only against other manufacturers but also against a number of Škoda customer teams. And after two wins of Elfyn Evans and Craig Parry (Ford Fiesta R5) in the first two events of the season, the first Škoda win of the year came in Rally Mexico from Teemu Suninen, at the wheel of a Fabia R5 prepared by Tony Gardemeister Services (TGS Worldwide OU). TGS is the team owned by Gardemeister and it includes a rally driving academy and WRC2 car rental, whole support team included.

And again in Argentina, another private driver, Nicolas Fuchs, obtained the win (the first win for a South American driver in WRC2) with a Fabia R5 prepared by his own team.

Portugal 2016 saw a new victory by Pontus Tidemand and the official team Škoda, but soon after Teemu Suninen obtained two wins in a row in Sardegna and Poland, at the wheel of a private Fabia R5, this time prepared by the experienced team Oreca.

Esapekka Lappi finished the year in great style, by winning in Finland, Germany, Wales and Australia, to ensure the WRC2 title ahead of Teemu Suninen and Elfyn Evans, while Kopecký obtained his only win of the year in the Rally Catalunya.

In 2017, Lappi left to Toyota and Andreas Mikkelsen joined Tidemand and Kopecký as official Škoda drivers, after the withdrawal of Volkswagen from WRC. Such a powerful trio of drivers and such an effective car left no room for victories to any other car and team in the first seven events of the year. 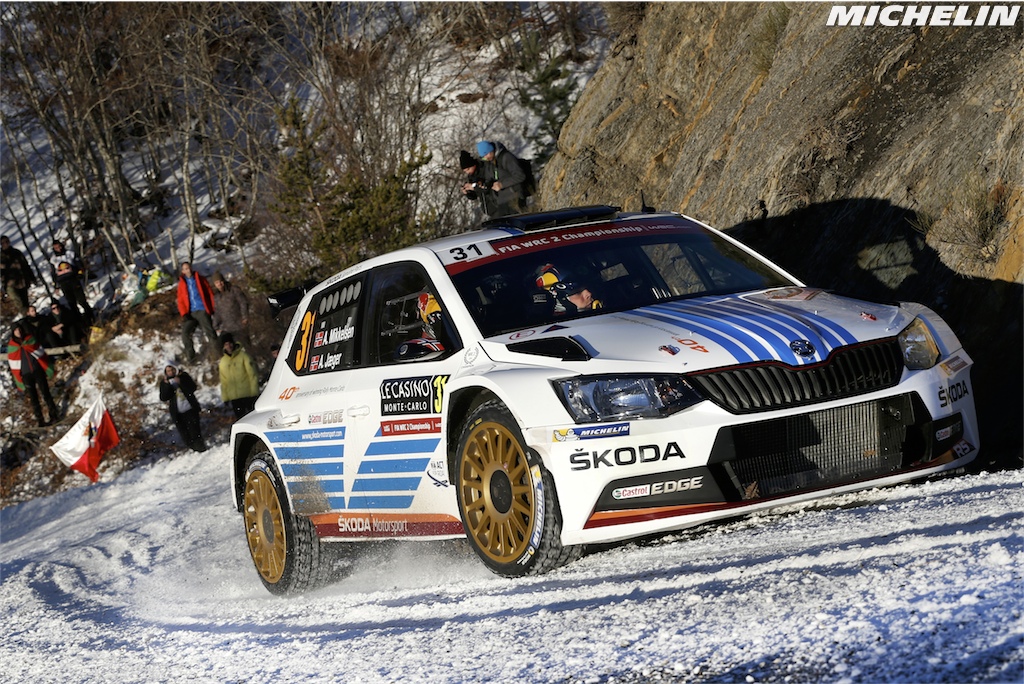 Mikkelsen in Monte Carlo and the Tour de Corse, Tidemand in Sweden, Mexico, Argentina and Portugal, and Kopecký in Sardegna confirmed the superiority of the Fabia R5 over his rivals. 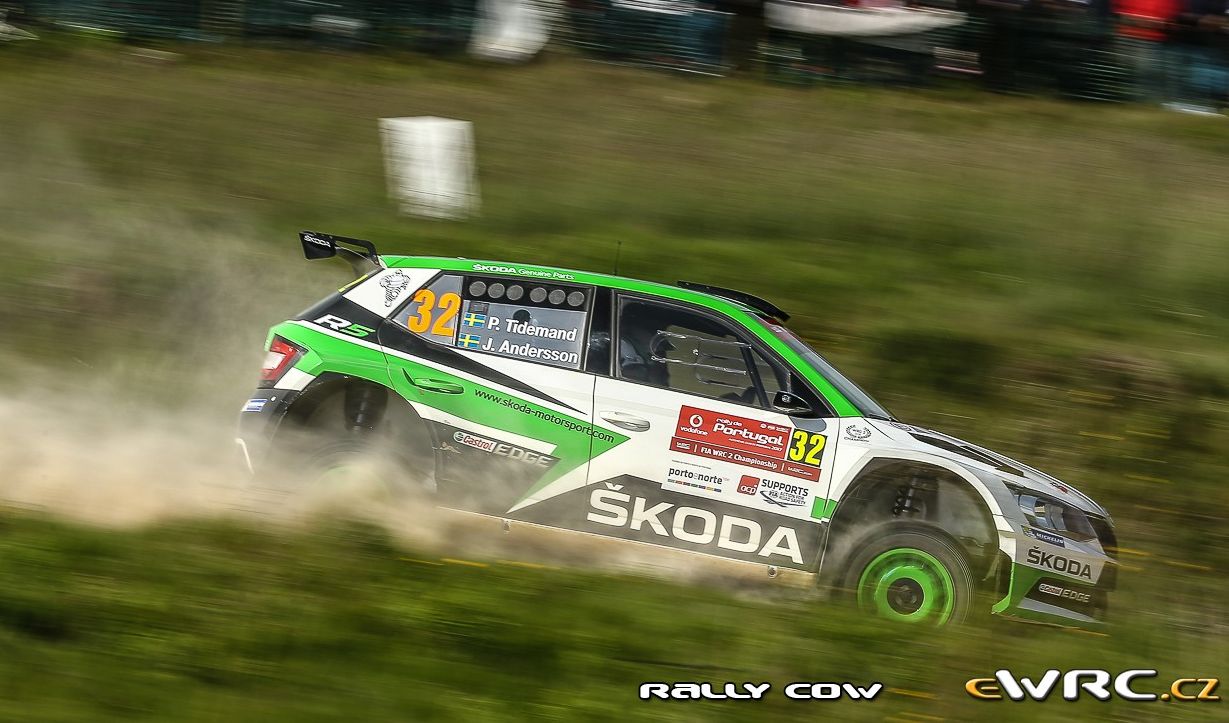 Private team Printsport Oy continued the path to win for the Fabia R5, by finishing first in Poland (with Ole Christian Veiby) and Finland (Jari Huttunen). 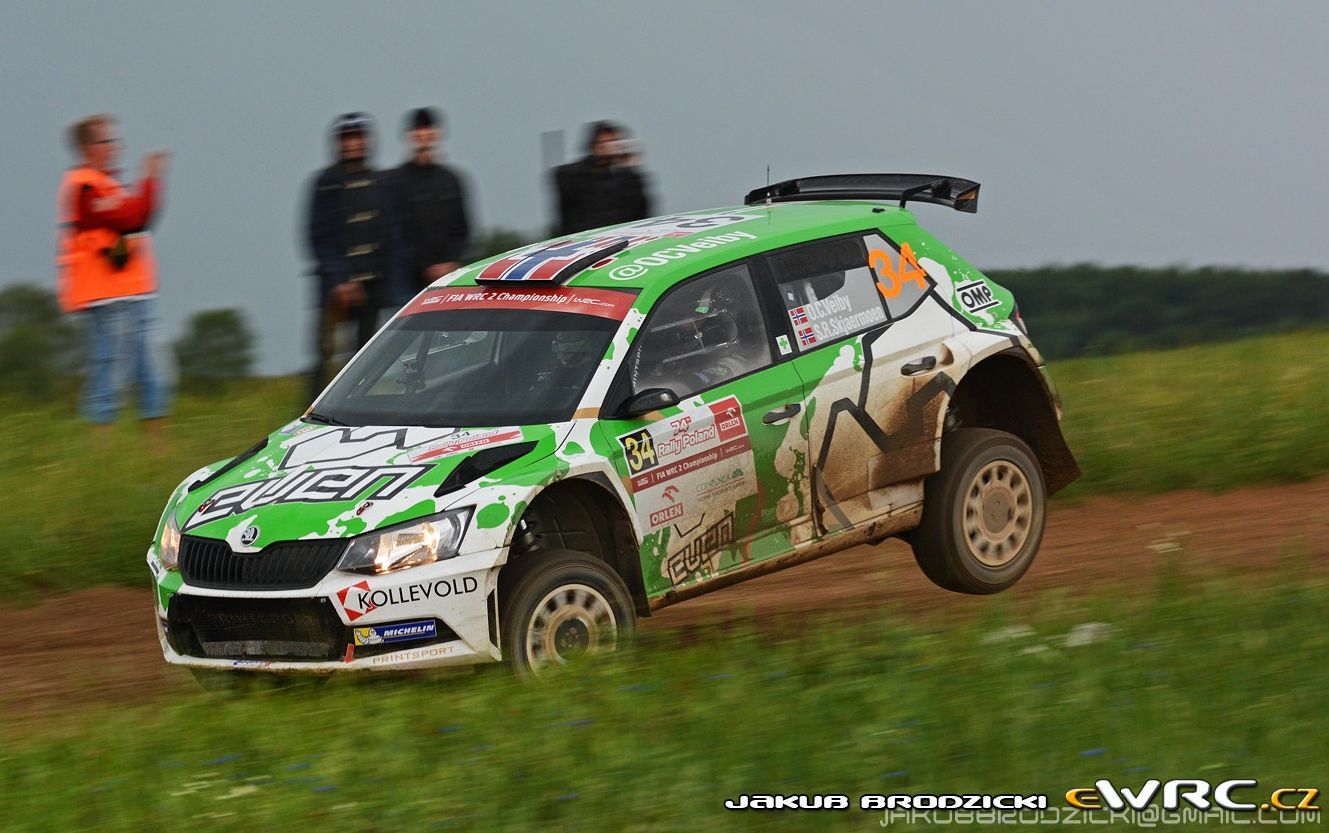 Printsport Oy is run by former Finnish rally driver Eero Räikkönen, and has contributed to developing the career of some of Scandinavia’s most successful recent rally drivers, including Esapekka Lappi, Karl Kruda, Łukasz Pieniążek or the same Veiby. 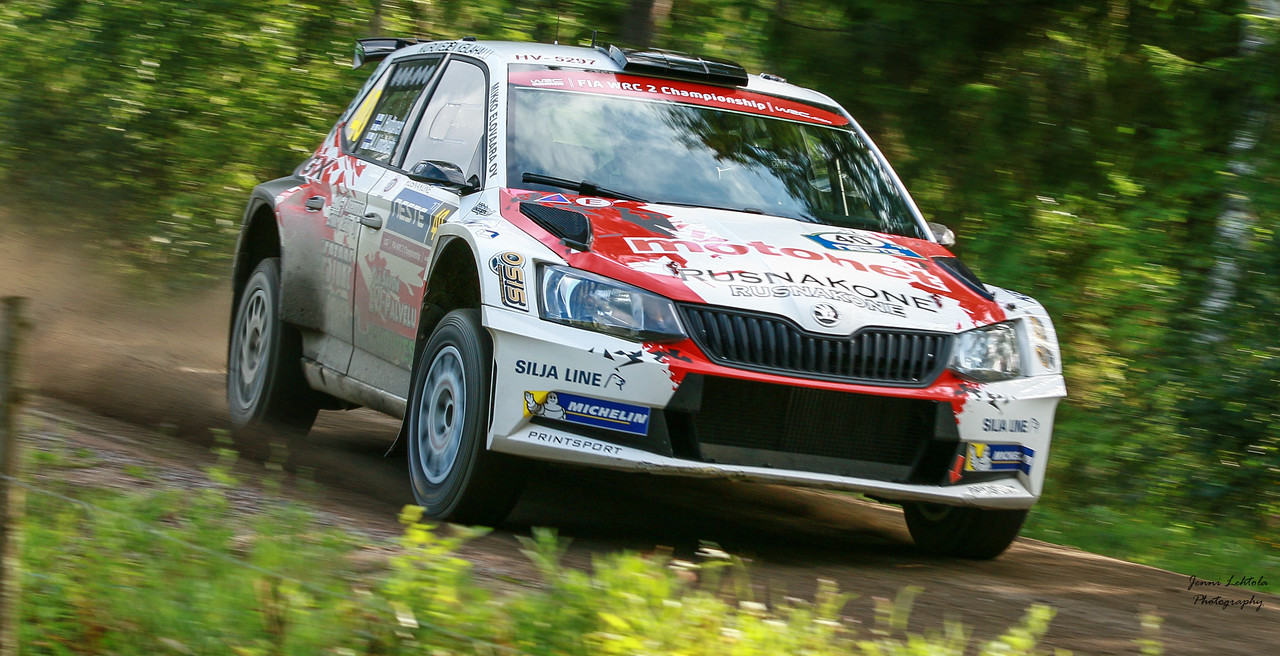 It was not until Wales Rally GB when Pontus obtained his fifth win of the season and the WRC2 title, ahead of Ford drivers Eric Camilli and Teemu Suninen. 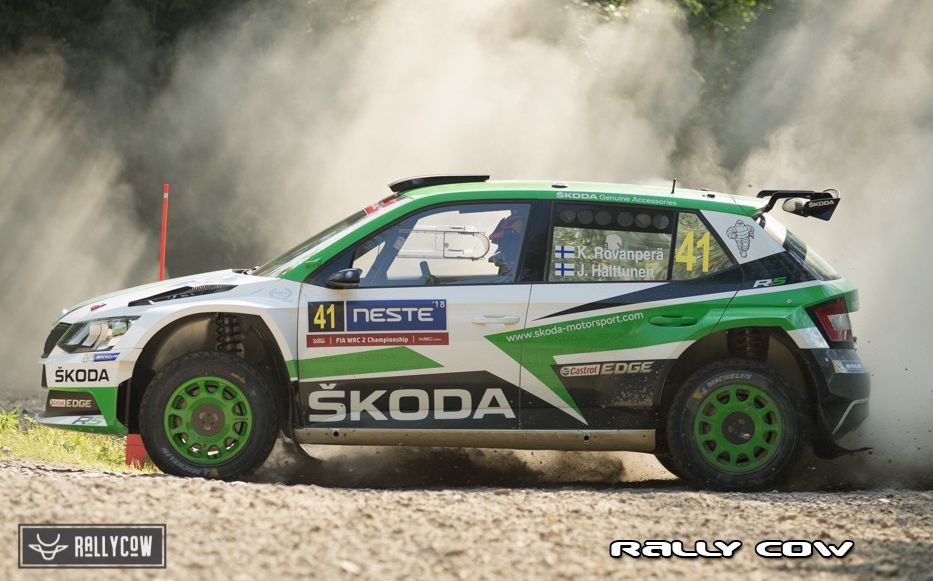 Rising star Kalle Rovanperä joined Škoda for 2018 season, teaming up with Tidemand, Kopecký and Veiby. Kopecký and Tidemand both made a strong start of the season, by winning three rallies each: Montecarlo, Corsica and Sardegna (Kopecký) and Mexico, Argentina and Portugal (Tidemand). 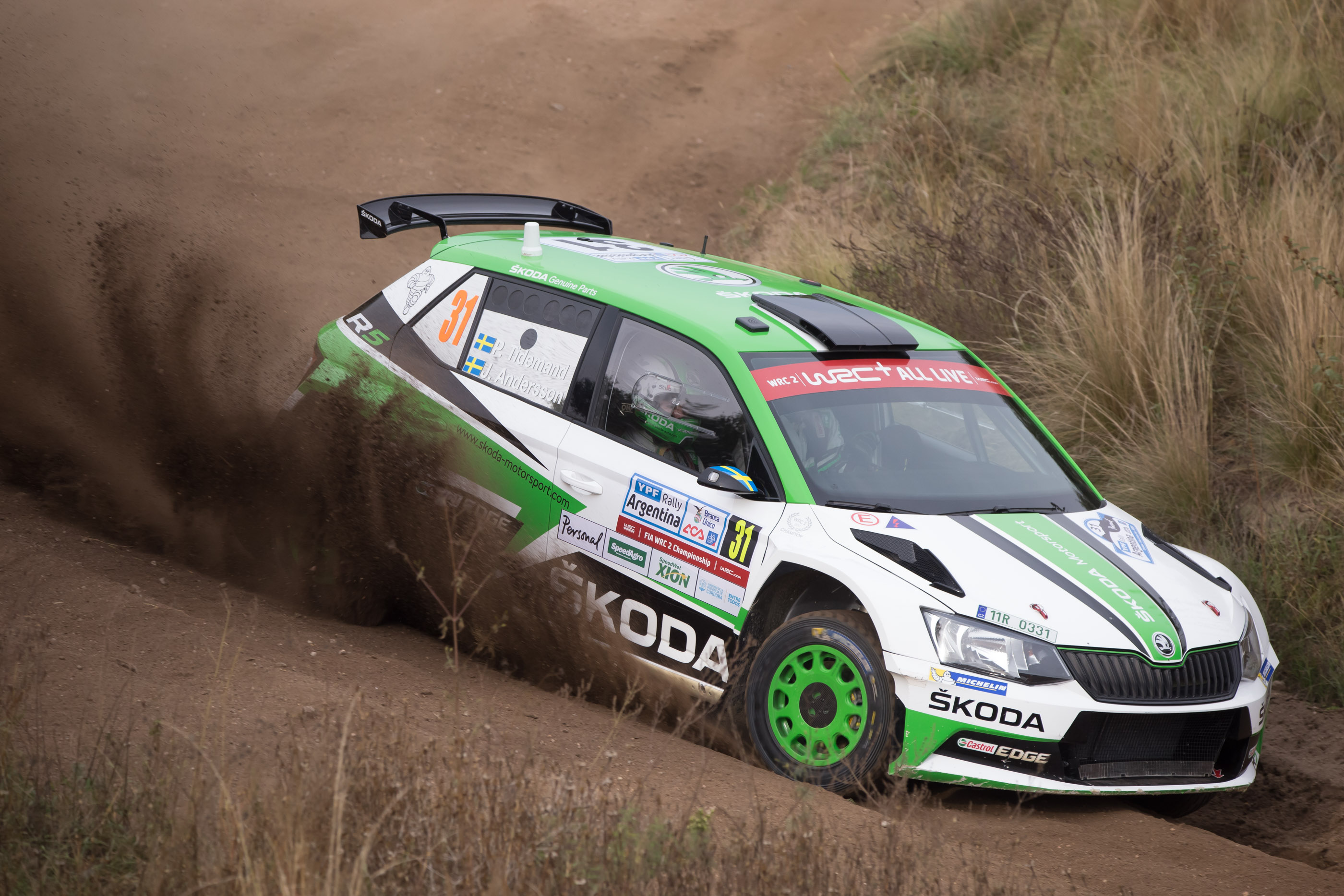 Rally Finland saw the victory of another Finn potential future champion such as Erik Pietarinen, at the wheel of a Fabia R5 prepared by TGS Worldwide OU team. 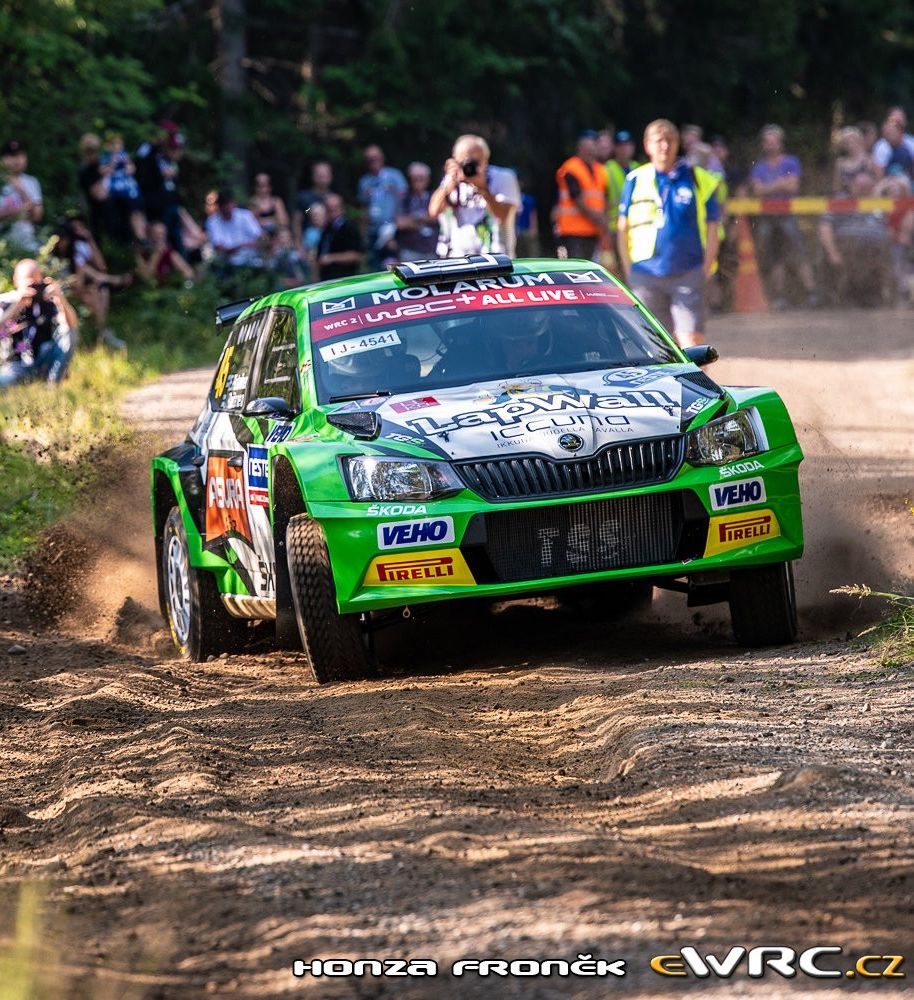 Jan Kopecký obtained two wins in a row in the next two events, Germany and Turkey, ensuring a well deserved WRC2 title after such a long and fruitful rally career in the WRC, which had started back in 2002 in Germany, and which has been since 2003 linked to Škoda. 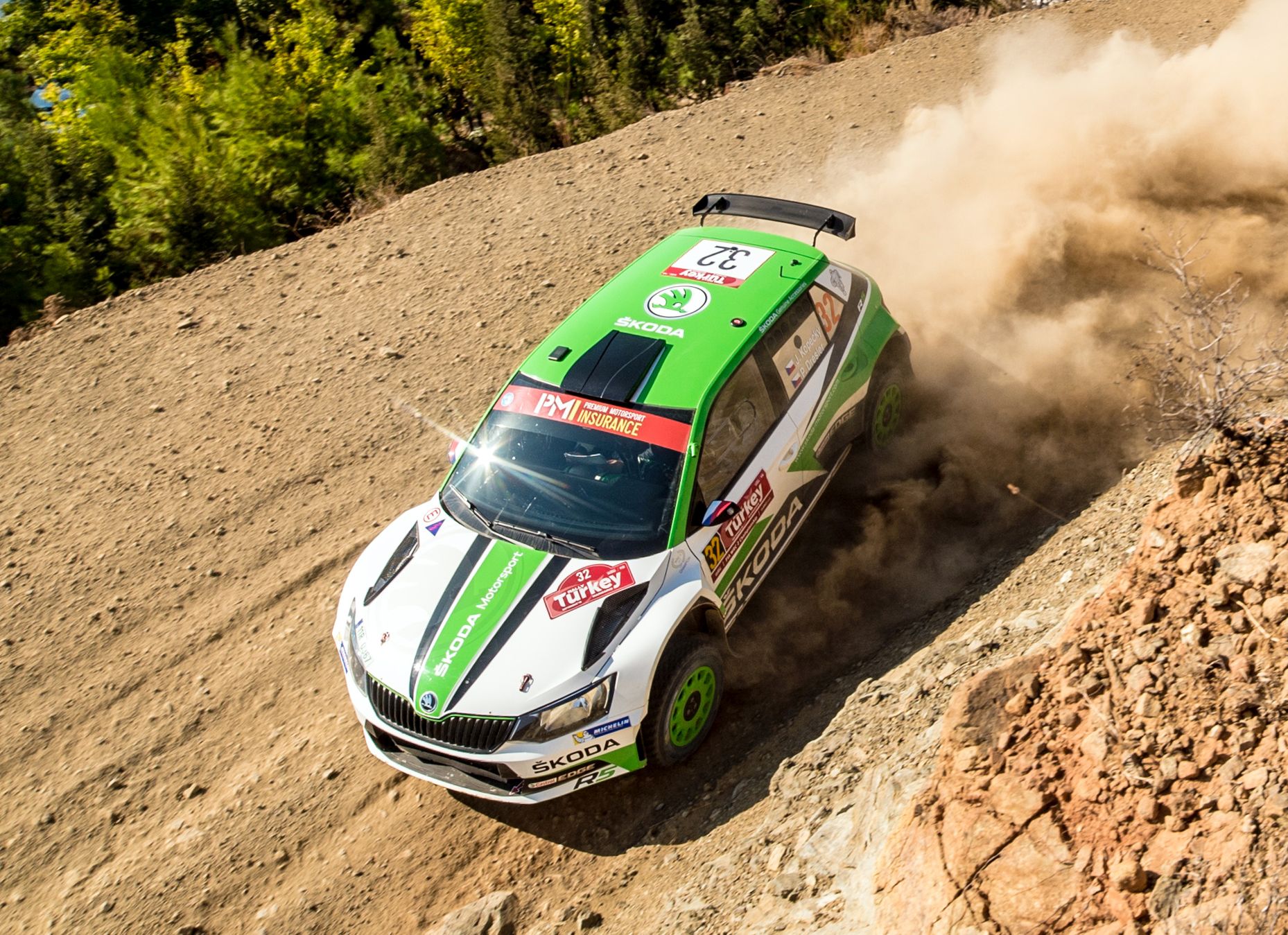 Final two rounds of the season saw the confirmation of Kalle Rovanperä as one of the future WRC champions, as he was able not only to win but to convince in so different events such as Catalunya and Wales. 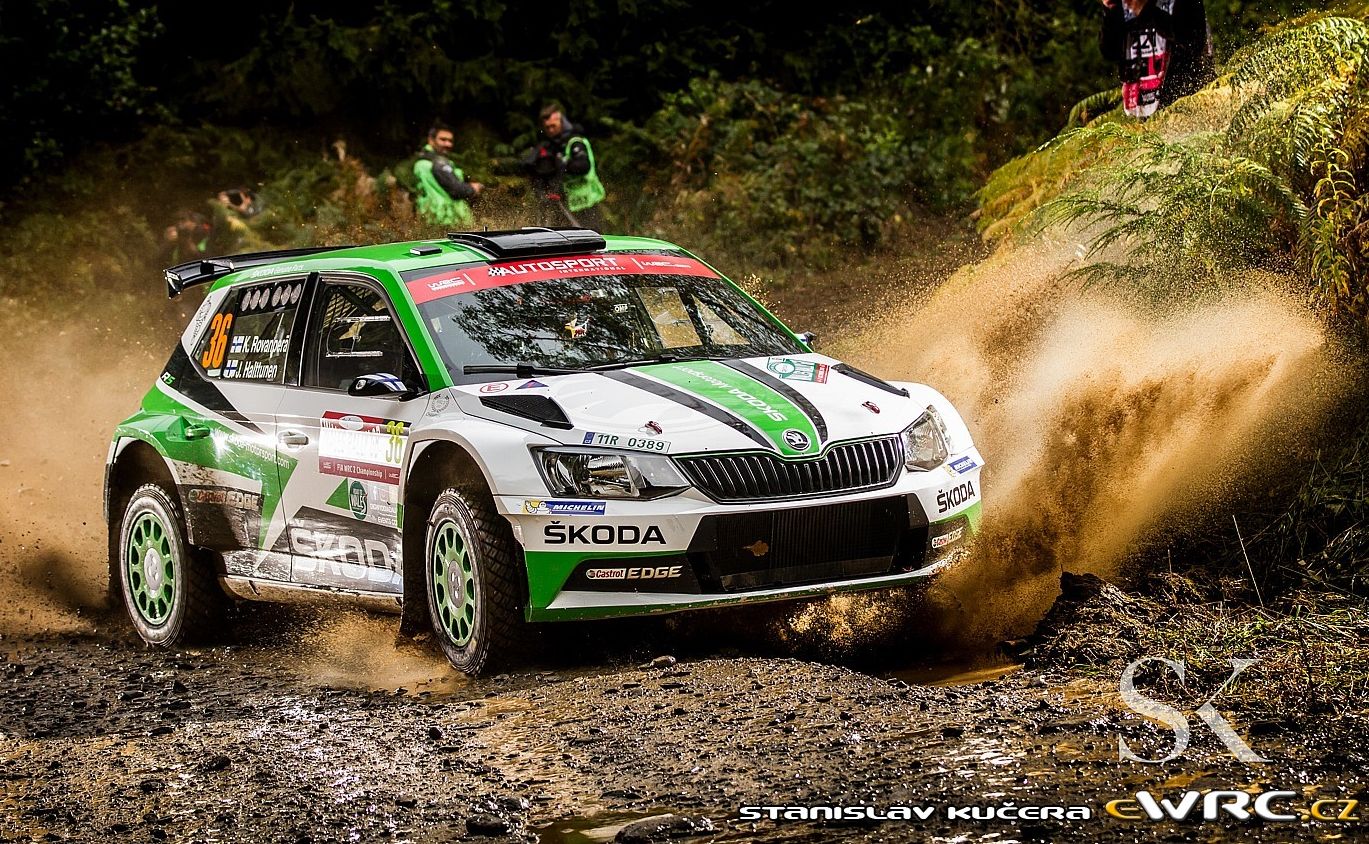 In addition to the four FIA WRC 2 Championship for Teams titles and the three titles for Drivers, the Škoda Fabia R5 has been supplied to more than 90 customer teams, and many of them have achieved great victories and National titles. Altogether, they have won 625 rallies in 60 countries all around the world, in the last four years.
For 2019, Škoda Motorsport is working on a new version of the car, named Fabia R5 Evo, whose homologation is expected for second half of 2019. Tests are being developed since mid-2018. In November 27th, 2018, the team presented to the press a design study of the future rally challenger that incorporates key elements of the new road-going FABIA. The main significant modification is a more dynamic design of the front end, inspired by new the road version of the car. For sure more modifications will come, and we will review them once the new car is homologated. 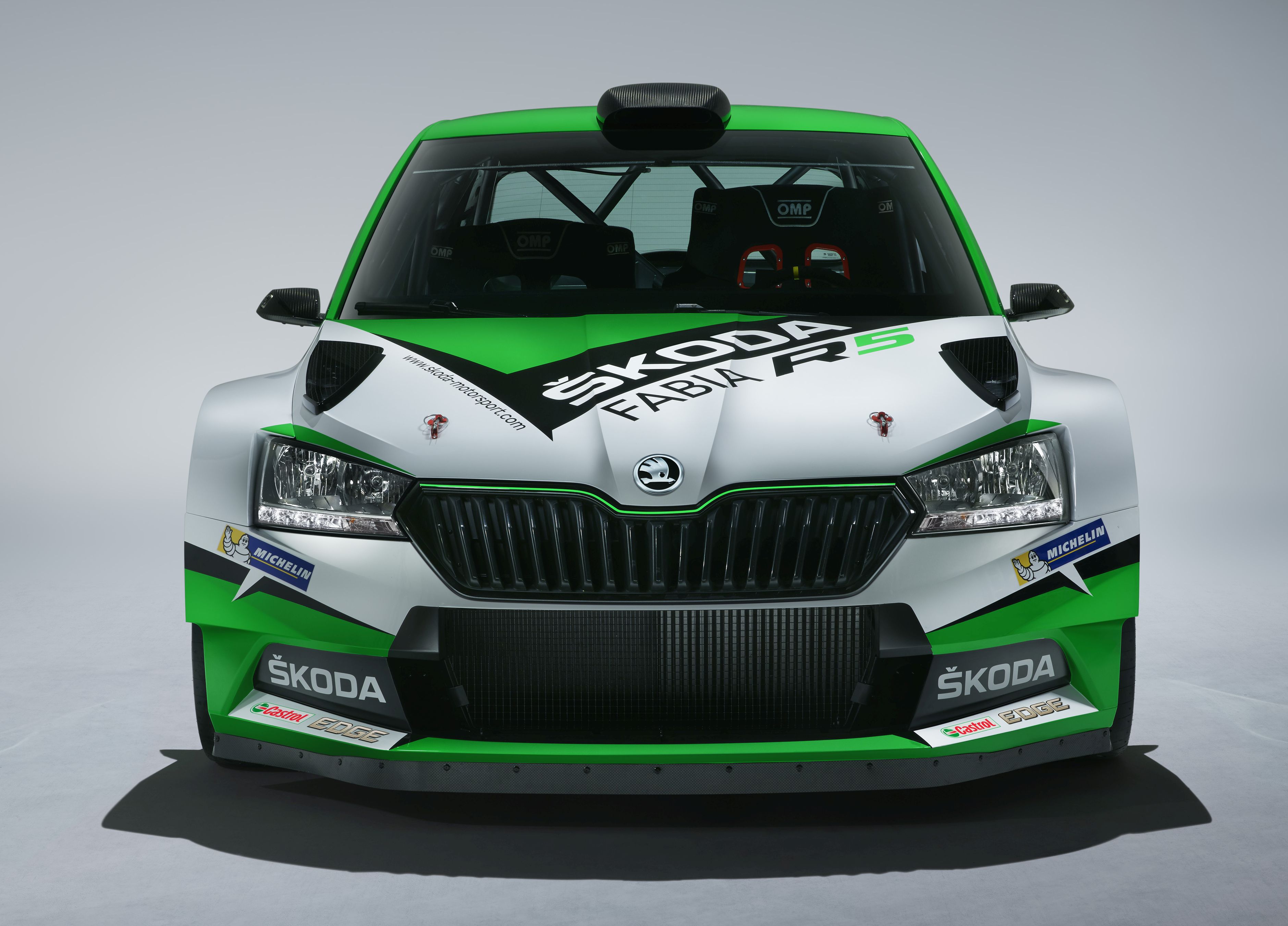