The decision taken by Hyundai in 2015 that it was time for enhancing their global motorsport image was the origin of the generation of a new R5 car, the i20 R5. Since the beginning, it was assumed as a secondary activity, oriented to customers, for what the participation as a works team in any championship was discarded.

The first step was the creation of the Hyundai Motorsport’s Customer Project division, which started its activities in September 2015. The goal was to develop an R5 car based on the i20 “New Generation” four-door model that was planned to appear in early 2016, and from which the 2016 version World Rally Car was also being developed. The plan was to get the homologation of the R5 when the car was ready, with no dead lines: due to the low number of jokers available after homologation, it was critical to avoid any mistake during the design and development process. 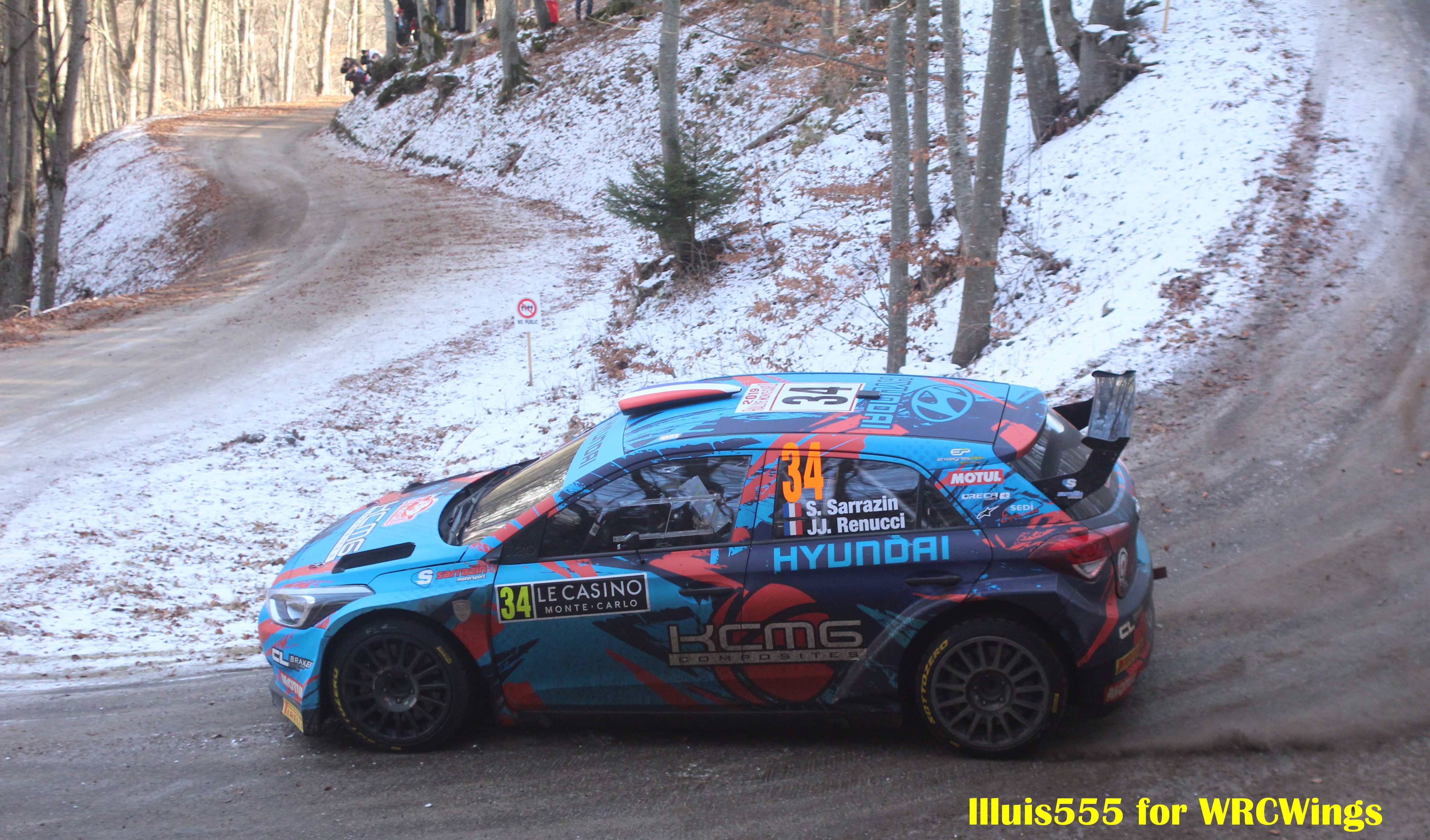 The next step was to name Andrea Adamo as Customer Project Manager (November 2015), and he assumed the leadership of the team in charge of the new car design and development. Most important part of the work was done in Hyundai Motorsport’s base in Alzenau, Germany, but with the contribution of some Korean engineers, because due to  regulations, more standard components were required in an R5 than in a World Rally Car. Also, some of the engineers involved in the WRC programme participated in the R5 design.

They started from the basic road car, using the same bodywork, similarly to what they had done with the WRC. It had only some minor modifications from the WRC, such as changing materials to reduce the car’s cost. The roll cage from the WRC was also used. The Hyundai R5 dimensions meant it was the biggest R5 car so far, with the longest overall length and the longest wheelbase, which presumably would make it more stable.

The engine was based on a 2-litre turbo engine from Hyundai production car range, used in Korea and in the USA for the Genesis model. The capacity was reduced to adapt to FIA rules, reducing the bore and stroke down to 1600cc.

Other parts of the car were installed from supplier packages, such as the transmission (Ricardo) or the brakes (Brembo). Suspension was developed internally, with close links to the WRC, but adapted to the R5 requirements. The dampers were made in-house at Hyundai. 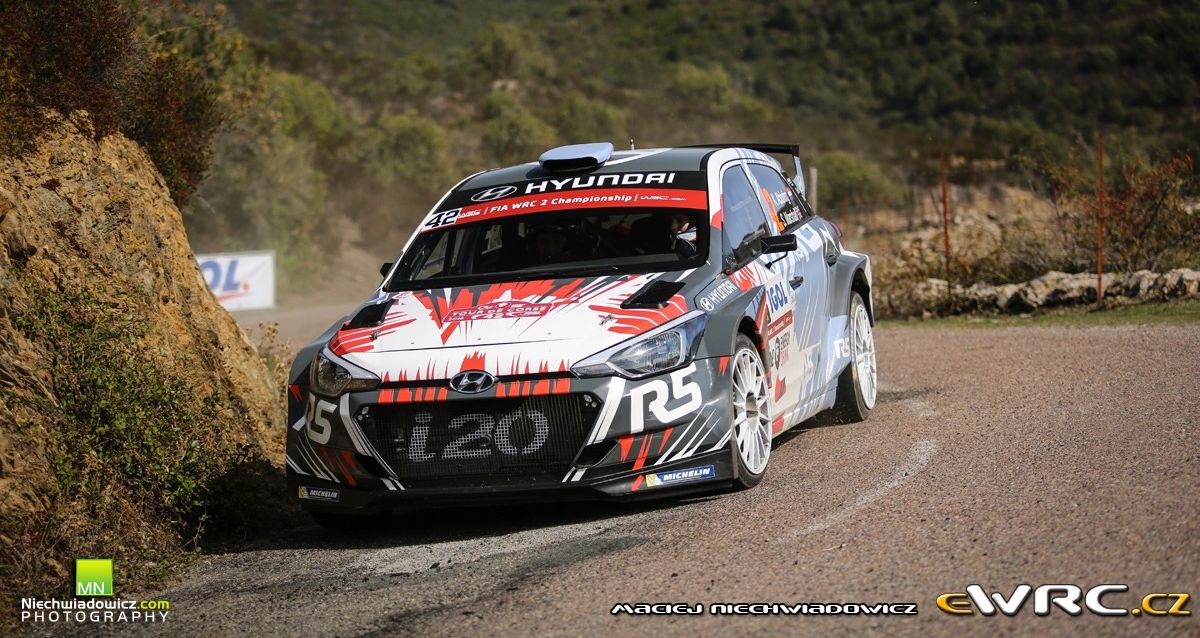 The main goal during the design phase was the cost, having in mind the price limit set by FIA (180.000€ per car). But one of the areas where more efforts were devoted was internal cooling. By regulation, the cooling components should emanate from a standard mass production car, for what radiators and intercoolers from different manufacturers were tested, and several modifications were evaluated, before final homologation.

For the aerodynamics, the team took advantage of the previous aero development work done for the 2016 WRC car package, originally developed at the Hyundai’s Namyang R&D Center in Korea. R5 regulations and cost considerations demanded some changes, such as increasing the reliability of some parts or the smaller size allowed for frontal openings. 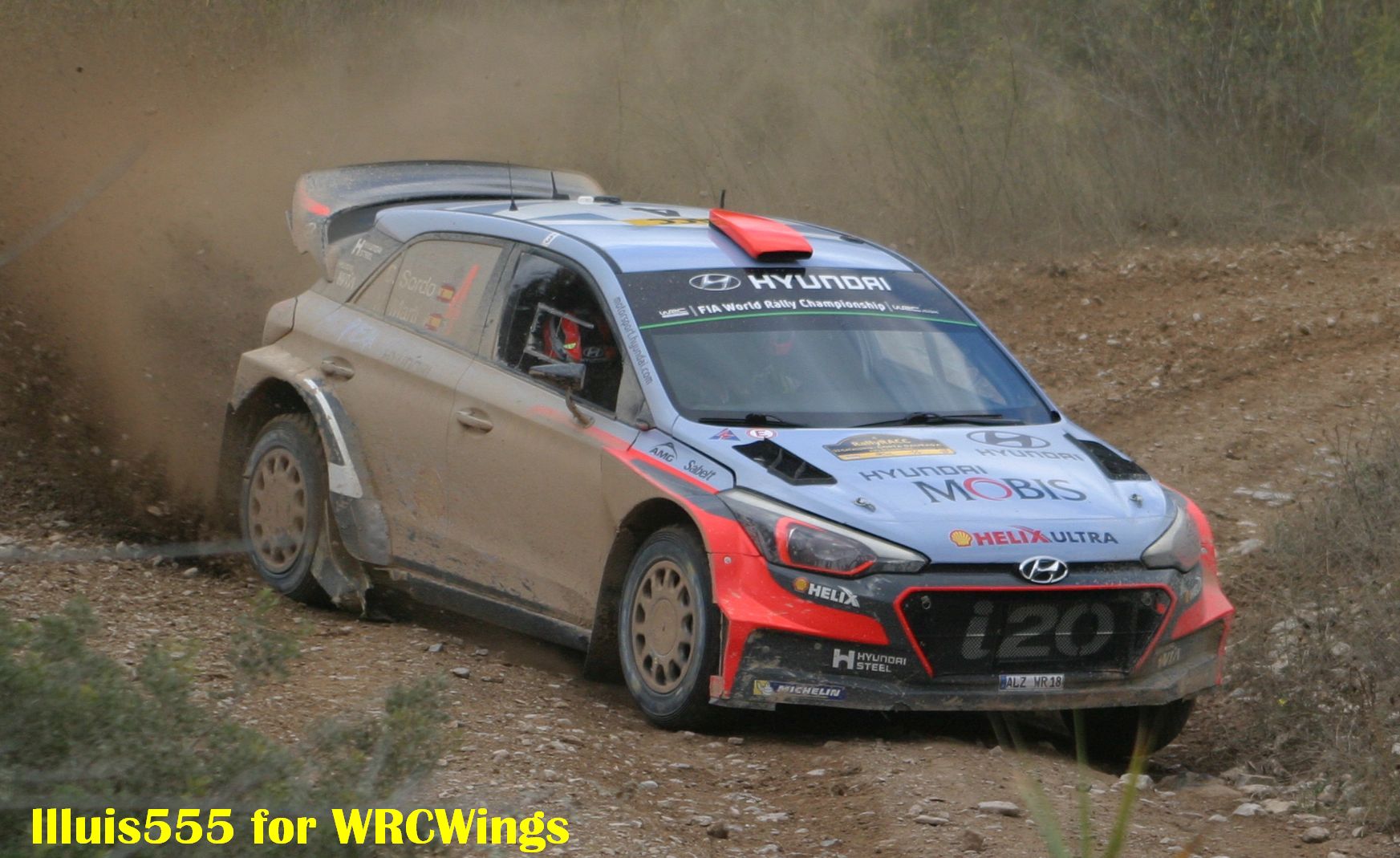 Apart from these changes, the front bumper, front wheel arches and bonnet design was very similar to that of the 2016 WRC, as shown in picture above. But the R5 front bumper did not include any side air vent, as it was the case in the WRC car.

The i20 R5 includes an original rear wing, with supports located at both extremes as a prolongation of the end plates, similarly to the rear wing of the Polo GTI R5. Endplates clearly show the inverted airfoil shape of the wing. An small Gurney flap is also included, at the rear of the wing. 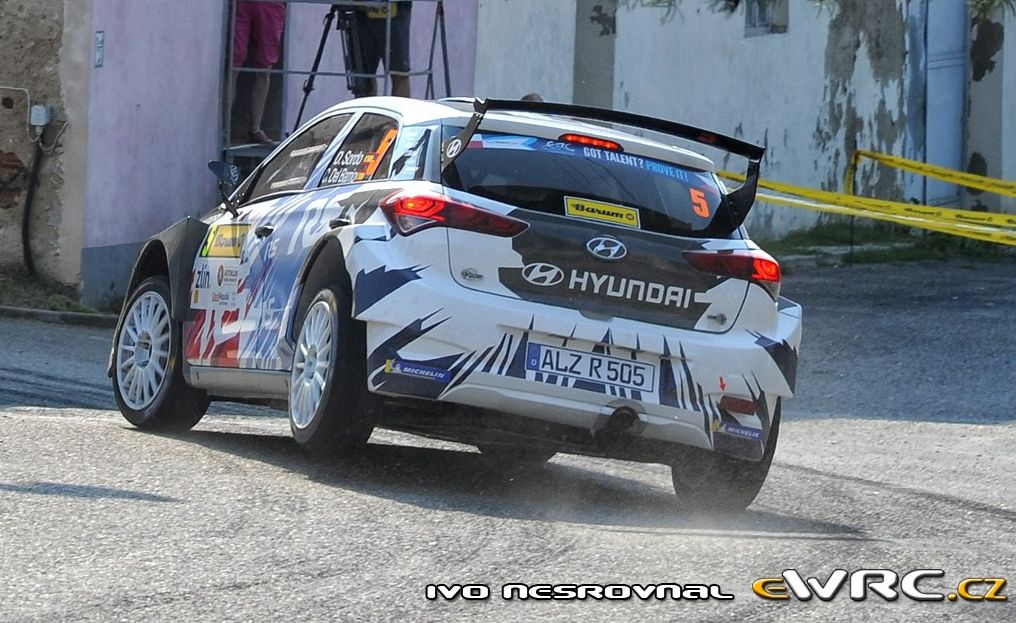 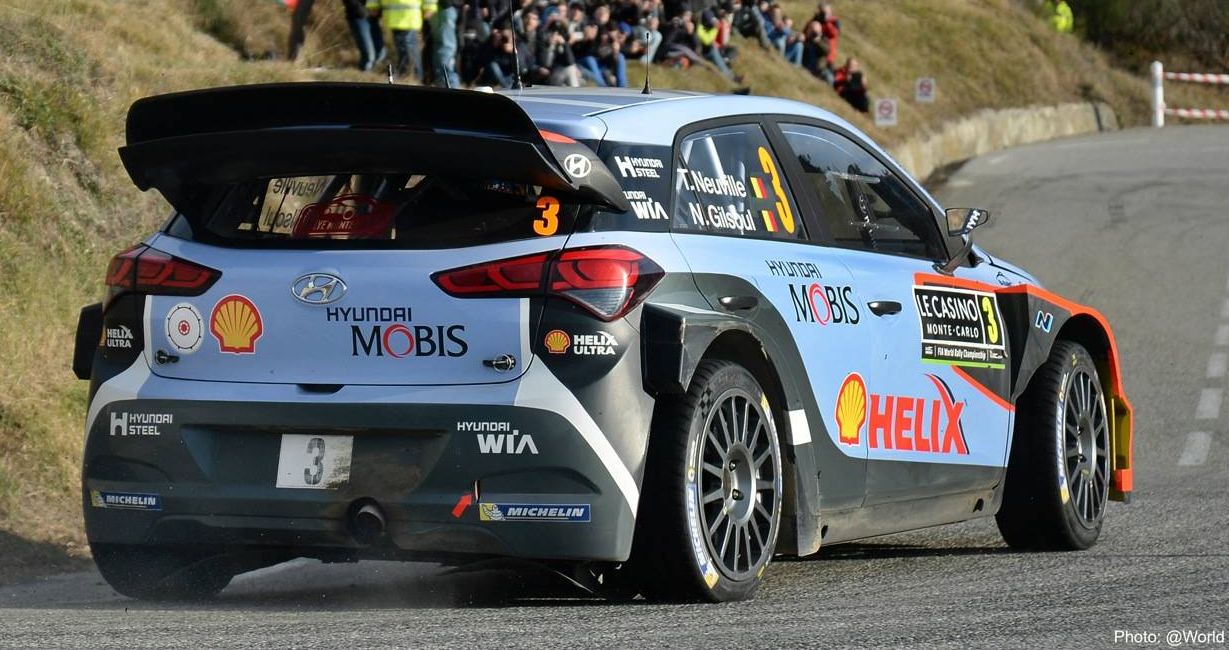 The rear bumper includes the same diffuser as in the i20 WRC 2016. It is smaller in size than that of the Fabia R5, the reference in the category in terms of rear diffuser. Side skirts from the WRC car were also included in the R5, which are similar in size to most of the other R5 competitors. 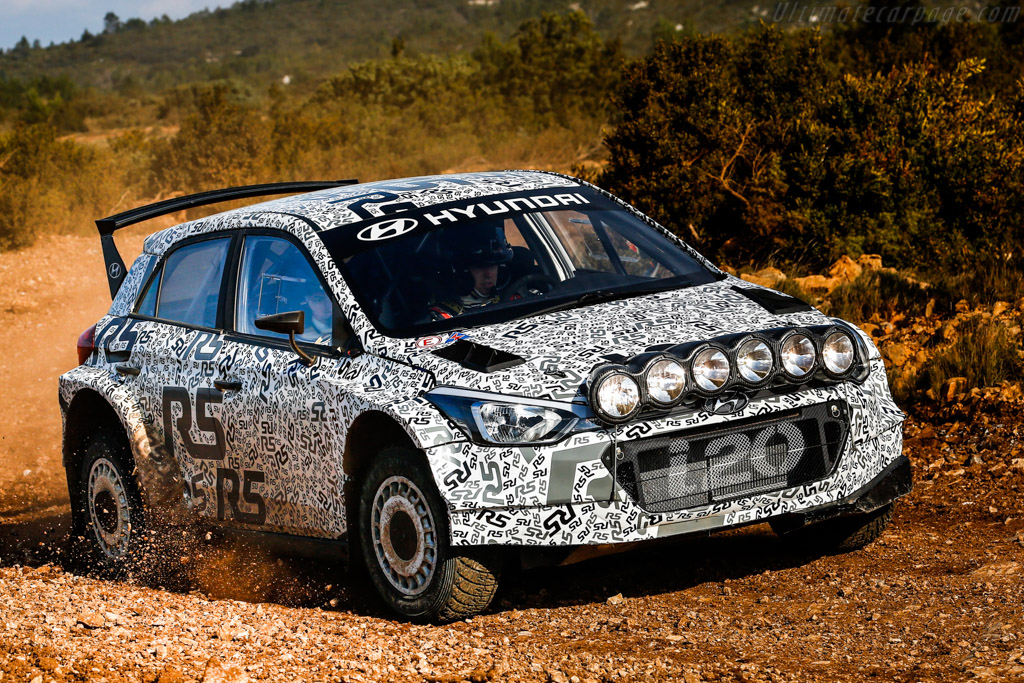 The car was designed and built in less than 5 months, and in January 2016 the first test was carried out, in the tough gravel routes of Fontjoncouse (France), with Kevin Abbring as test driver. More gravel test followed in February, while March and April were devoted to asphalt tests in France and Italy, respectively, all with Abbring as test driver. 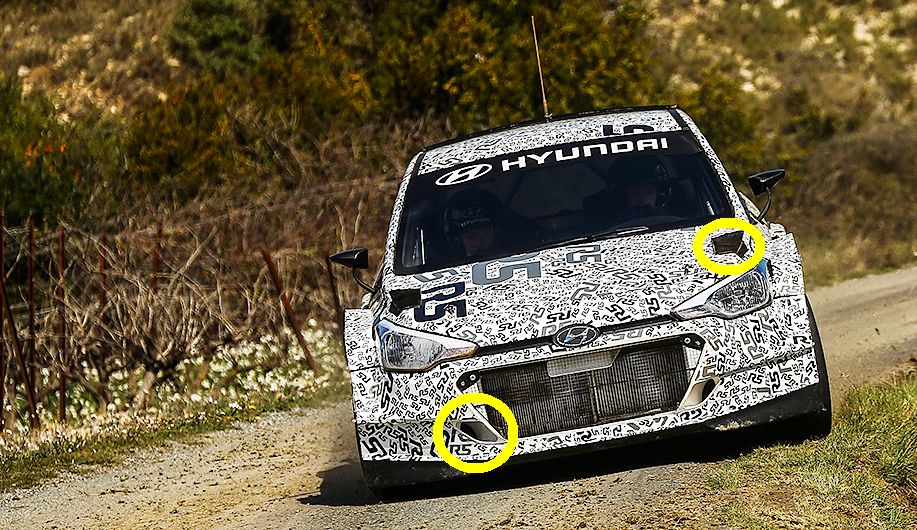 New tests in May were devoted to evaluate the car’s cooling system on the updated engine, as redesigned bonnet and front bumper were incorporated. Most visible modification was the addition of two air inlets for brake cooling and the relocation of the bonnet air vents, as shown in picture above, in comparison with previous picture.

First public appearance took place at the Ypres Rally, by the end of June 2016, where Abbring/Marshall drove the i20 R5 as a course car. More tests were developed in August in the French Chambley circuit, where additional modifications to optimise the cooling package were evaluated. 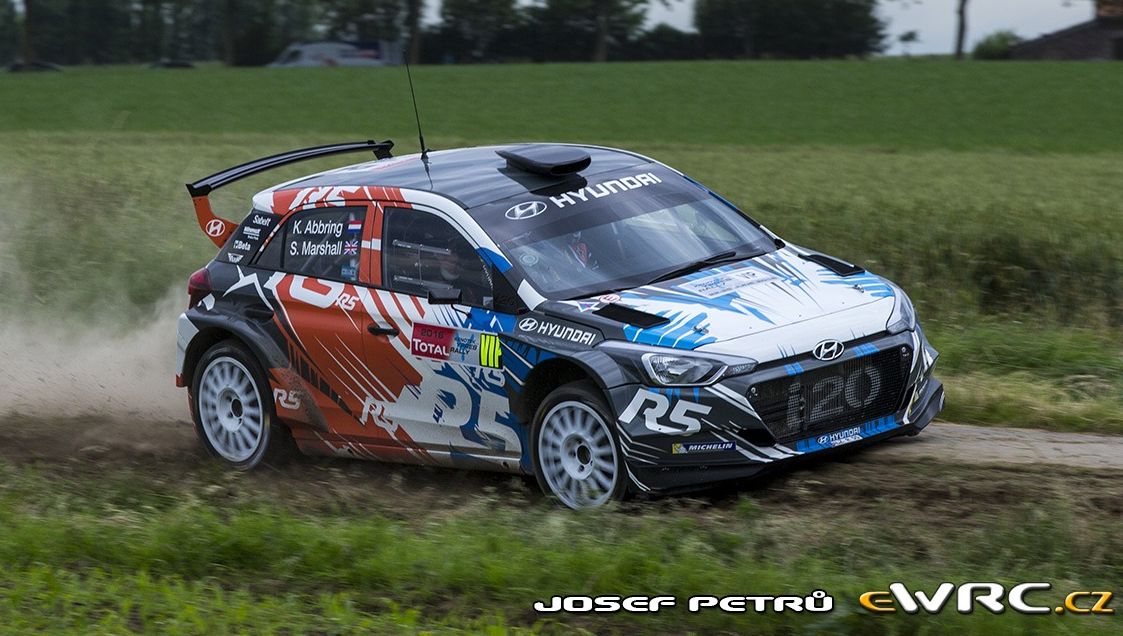 Finally, the car was homologated in early September, some days before the Tour de Corse, where the car made its first appearance in the WRC2 Championship. Three cars were present: the official car for the duo Kevin Abbring / Seb Marshall, and two customer cars, driven by Stéphane Sarrazin / Jacques-Julien Renucci and Fabio Andolfi / Manuel Fenoli. Abbring completed the first day in a more than acceptable third position, just behind the official cars of Evans (Fiesta R5) and Kopecky (Fabia R5). On the second leg, he was forced to retirement, due to a water leak, but the car had already proven that it was able to show a good pace, by setting some interesting stage times. Sarrazin also retired after losing a wheel, while Andolfi finished sixth in the RC2 category (open to all R5 cars, registered for WRC2 or not). 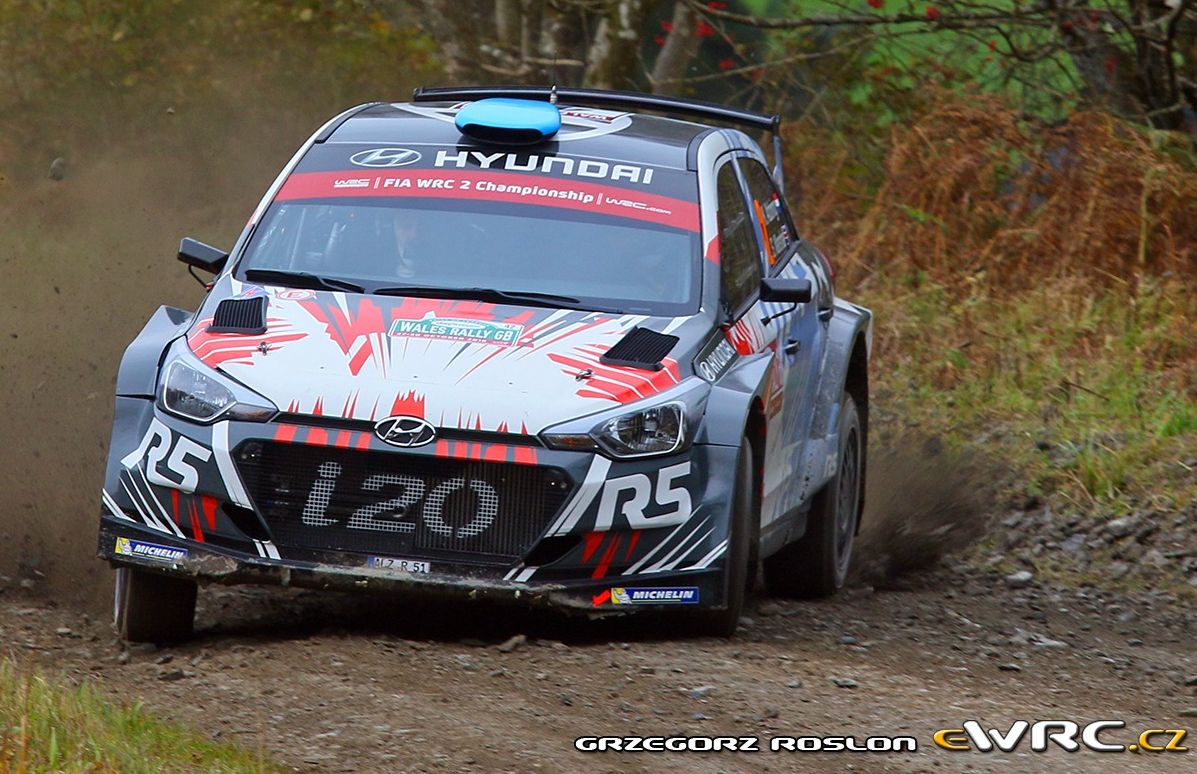 The next appearance took place in Wales. Things didn’t start really well, as Abbring/Marshall got stuck in a ditch in the first stage of the rally, and they were forced to restart the second day in super-rally. The second day things turned even worse, when transmission problems on road section to first stage forced them to return to the service park, where they stood the whole day. All this bad luck turned into success in the final day, as they set the fastest time in the first three stages of the day, before going off the road in the last stage. But they confirmed the potential of the car.

Which reached definitive confirmation one month later, when the first overall win arrived in the French Rallye du Var, with Abbring and Marshall finishing ahead of all the French Championship front-runners.

The team inscribed the car in the category RC2 of some selected events in 2017. Abbring/Marshall completed the Rallye Monte Carlo with multiple problems, in the 14th position, while Korean Chewon Lim and Belgian Martijn Wydaeghe were 12th in Deutschland. 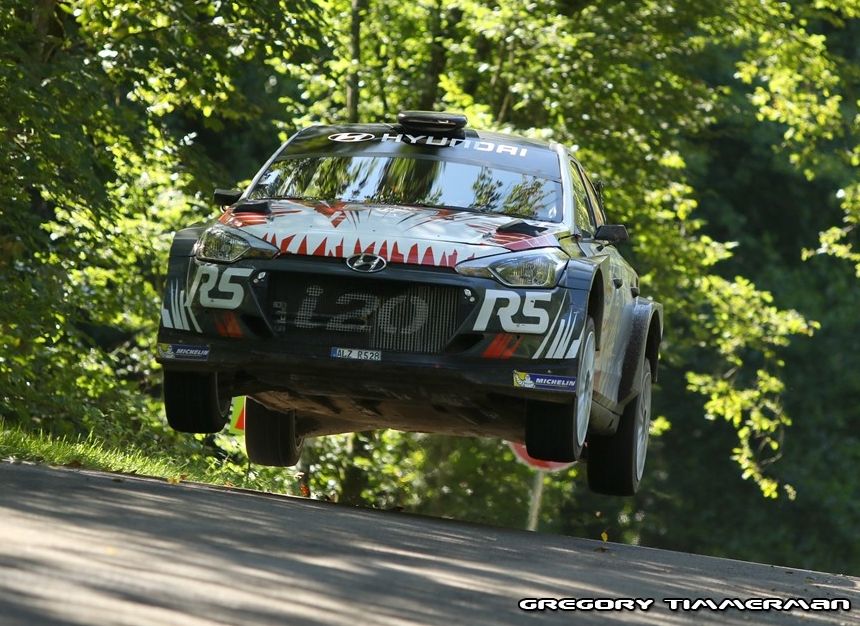 In the WRC2 Championship, several privateers ensured the presence of the car in the Championship. Most representative was Italian Fabio Andolfi, who took part in 6 events, starting in Portugal, with a customer car maintained by ACI Team Italia. However, the best result of the season came from Tom Cave and James Morgan, who finished third WRC2 in Finland, with a car prepared by Adapta AS.

In parallel, Hyundai aligned the i20 R5 in some selected European events, with the official WRC drivers at the wheel: Neuville at Ypres Rallye and Paddon at Sanremo. While the Belgian was delayed by an accident, the New Zealander finished second in Sanremo, where he took the opportunity to improve his driving abilities on tarmac. 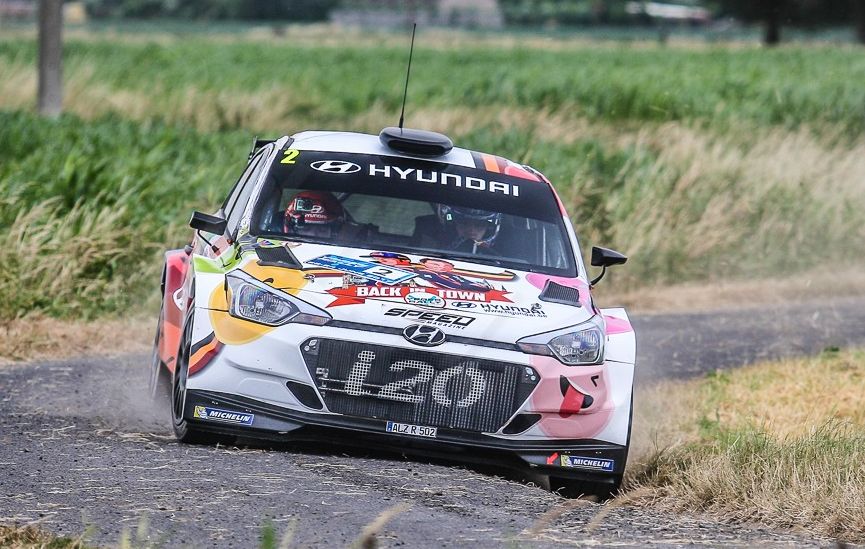 In September 2017, Hyundai got advantage of the experience of the new-recruited Andreas Mikkelsen, especially with the Fabia R5, to validate new modifications for the car, and took him to France for a 2-day test.

Thanks to the tests and the team effort during 2017, the car received a wide-range of updates for the next year, including the latest specification engine, dampers and electronics (homologated in March 1st, 2018). Jari Huttunen and Antti Linnaketo were selected for the Hyundai Motorsport Driver development Program, and they took part in 7 events of the season, at the wheel of the official, upgraded car. The best result for the Finnish pair was a second position in Finland, in one of the events of the year with a longer and more qualified entry list in the WRC2 category, in what it is, still, the best result obtained by a Hyundai i20 R5 in the World Championship 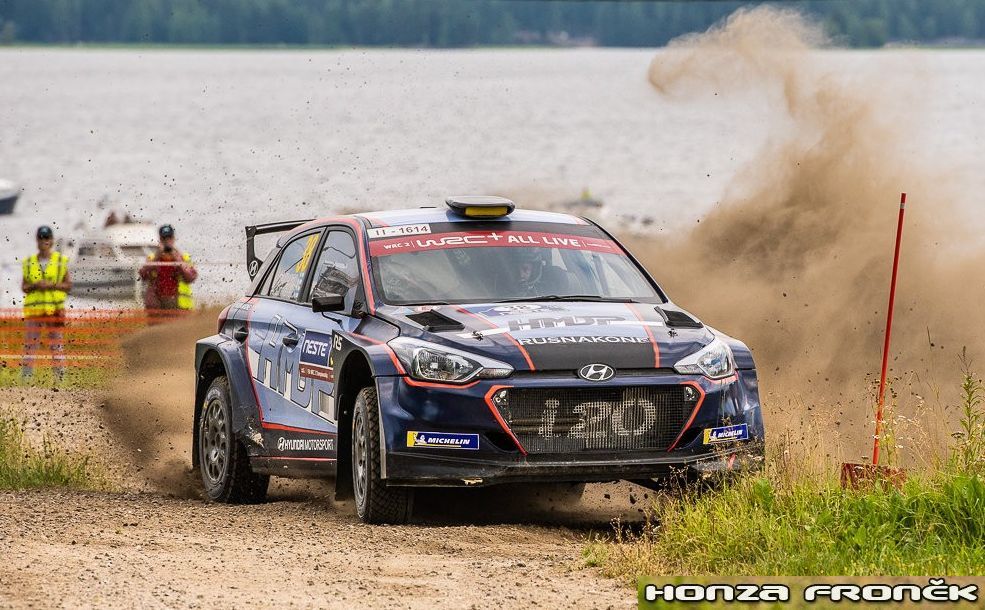 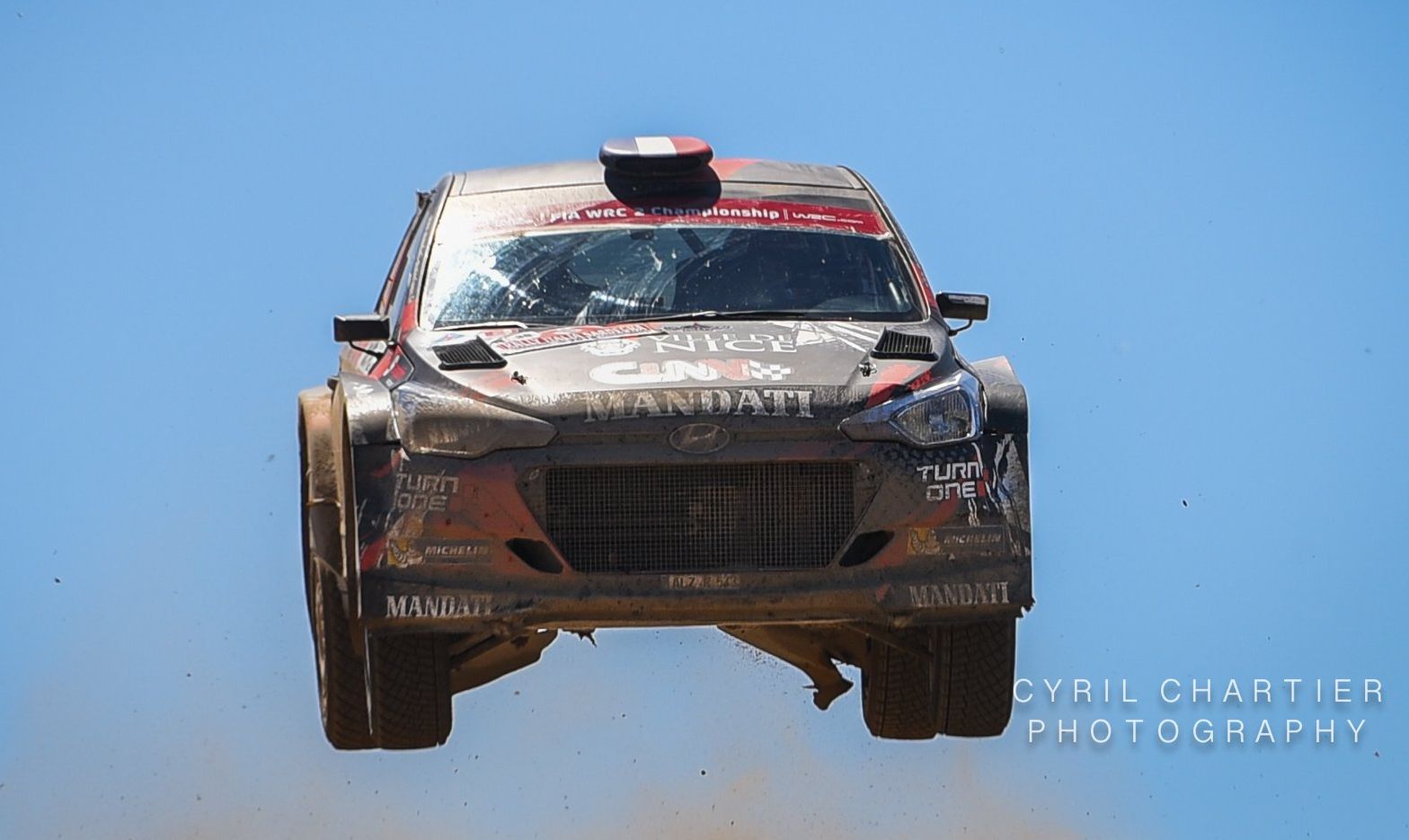 Thierry Neuville repeated in Ypres Rally 2018, where he finally won the classic Belgian event, at the wheel of a distinctively decorated i20 R5, while Sordo was third in Czech Barum Rally. 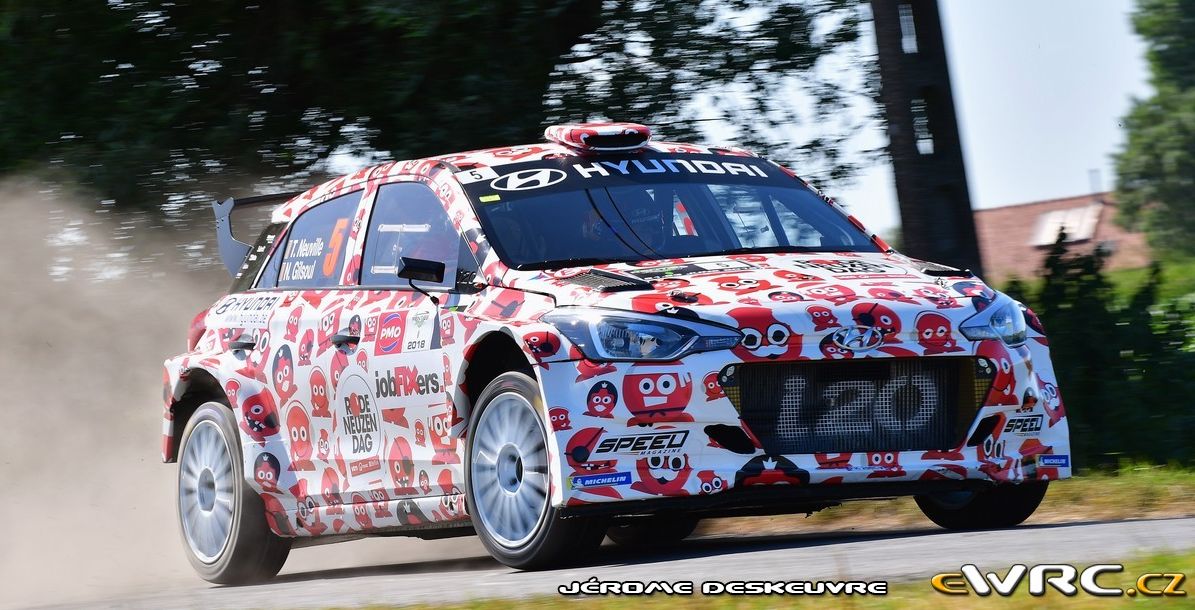 In 2019, the year started with the private duo Sarrazin/Renucci reaching a brilliant third position in the RC2 category in Monte Carlo, only behind WRC2Pro winner Greensmith/Edmondson and WRC2 winners Bonato/Boulloud.

The only official appearance of the Hyundai i20 R5 this year has been in Portugal, where Dani Sordo and Carlos Del Barrio finished in first position in the Rallye Serras de Fafe, as a preparation for the coming Rally Portugal.