After our review of how RX Supercars generate downforce at the car front, we will cover in this post the main device for rear downforce generation in the RX Supercars. As in the case of WRC cars, this is the rear wing. In opposition to the rear diffuser, WRX technical regulations allow much more freedom in the design of the rear wing. We will review the different designs used by each car, as we previously did in the comparative of the rear wing of the 2017 WRC car generation. 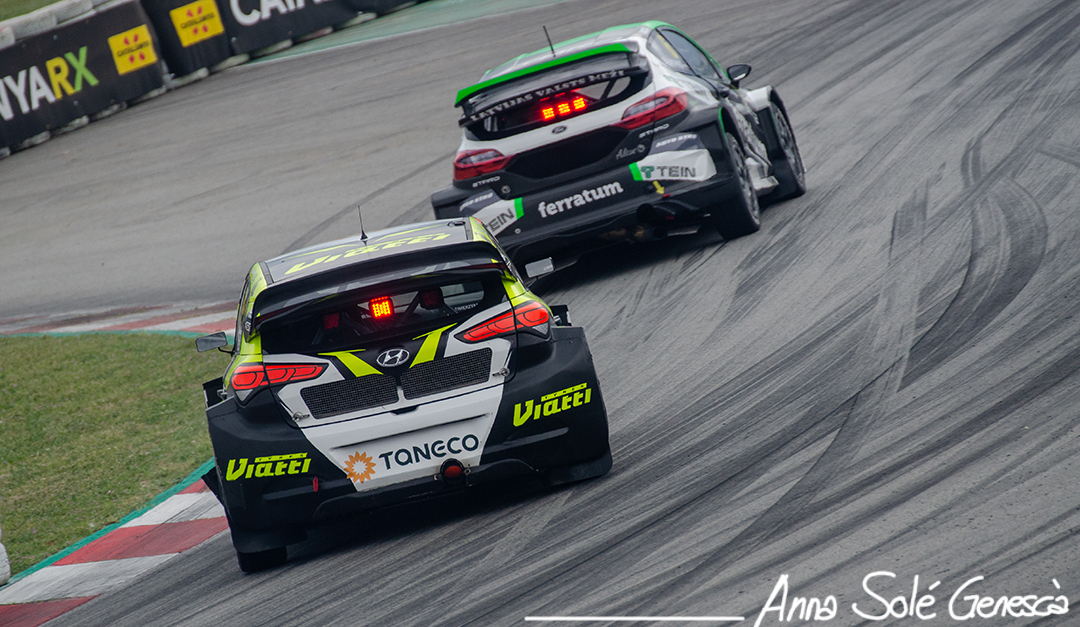 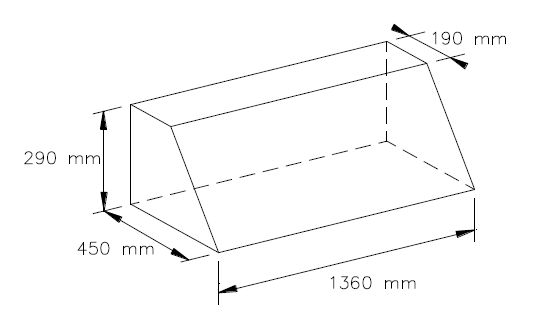 All RX supercars include developed aero devices as rear wings, with different solutions in order to contribute to transfer all the power generated by their 600 hp engines to the track. In all cases, the rear wing is a biplane, following the shape of an inverted airfoil.

The rear wing of the new Ford Fiesta designed by Stard is a biplane wing with no end plates, but supports on both sides, very similar to the rear wing of the Hyundai i20 WRC (2014-2015). Note the vertical fin at the rear of the upper plate: this is called Gurney flap, and it is incorporated to increase wing efficiency. The main benefit is an increase in downforce generated by the wing. The presence of the flap allows the flow to remain attached for longer than without any flap; if separation happens later, the wing can be set at higher angles of attack (as the risk of premature separation is avoided), and higher angle of attack means higher downforce. Although at a higher drag cost. 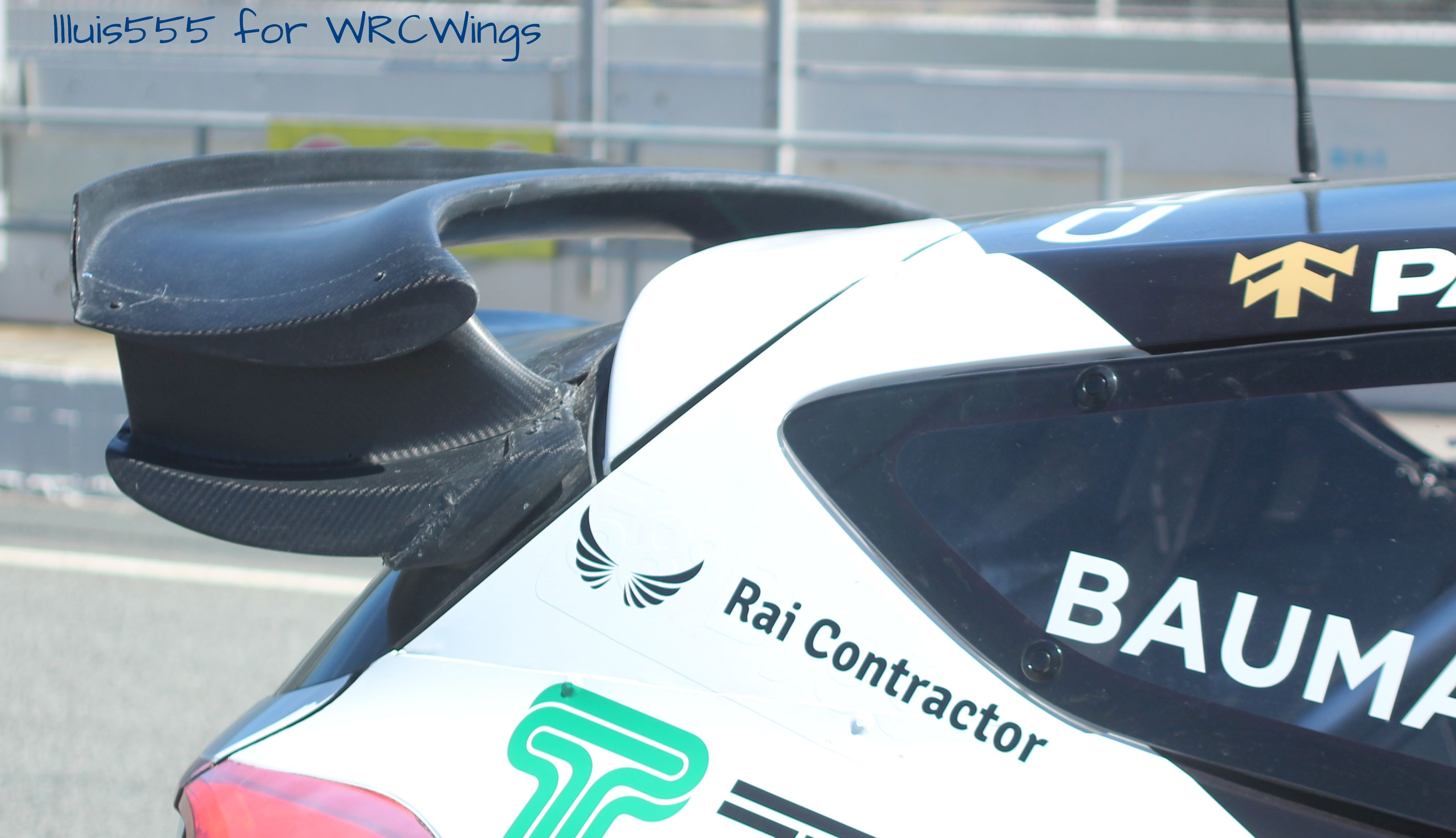 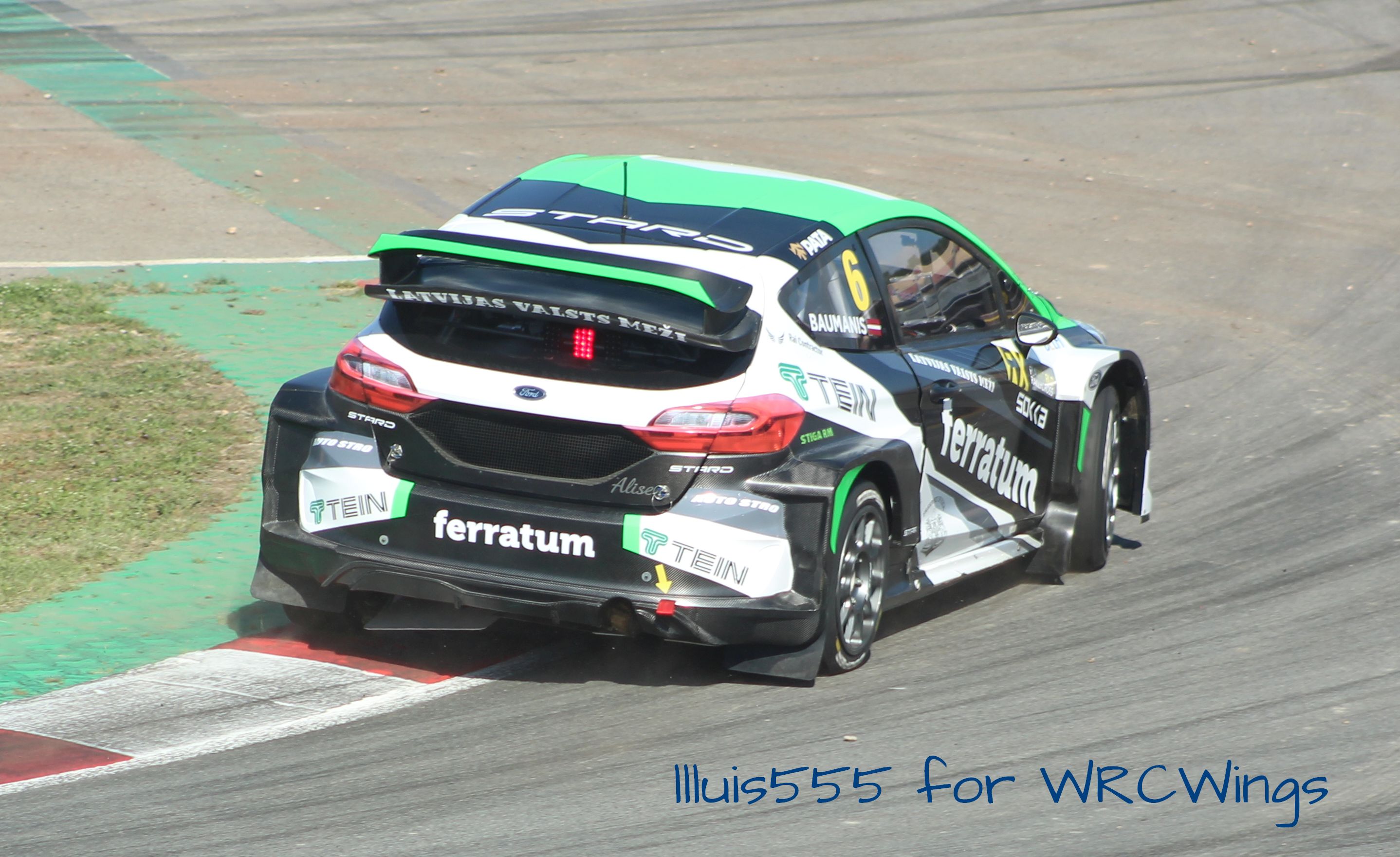 The rear wing of the All-inkl.com Muennich Motorsport‘s Seat Ibiza is similar to that of the new Fiesta, with the addition of vertical fins on top of the upper plate. These fins have been added this year, to the wing design used in last season. The presence of vertical fins contributes to generating downforce when the car is moving sideways, which is very usual in RX supercars races. 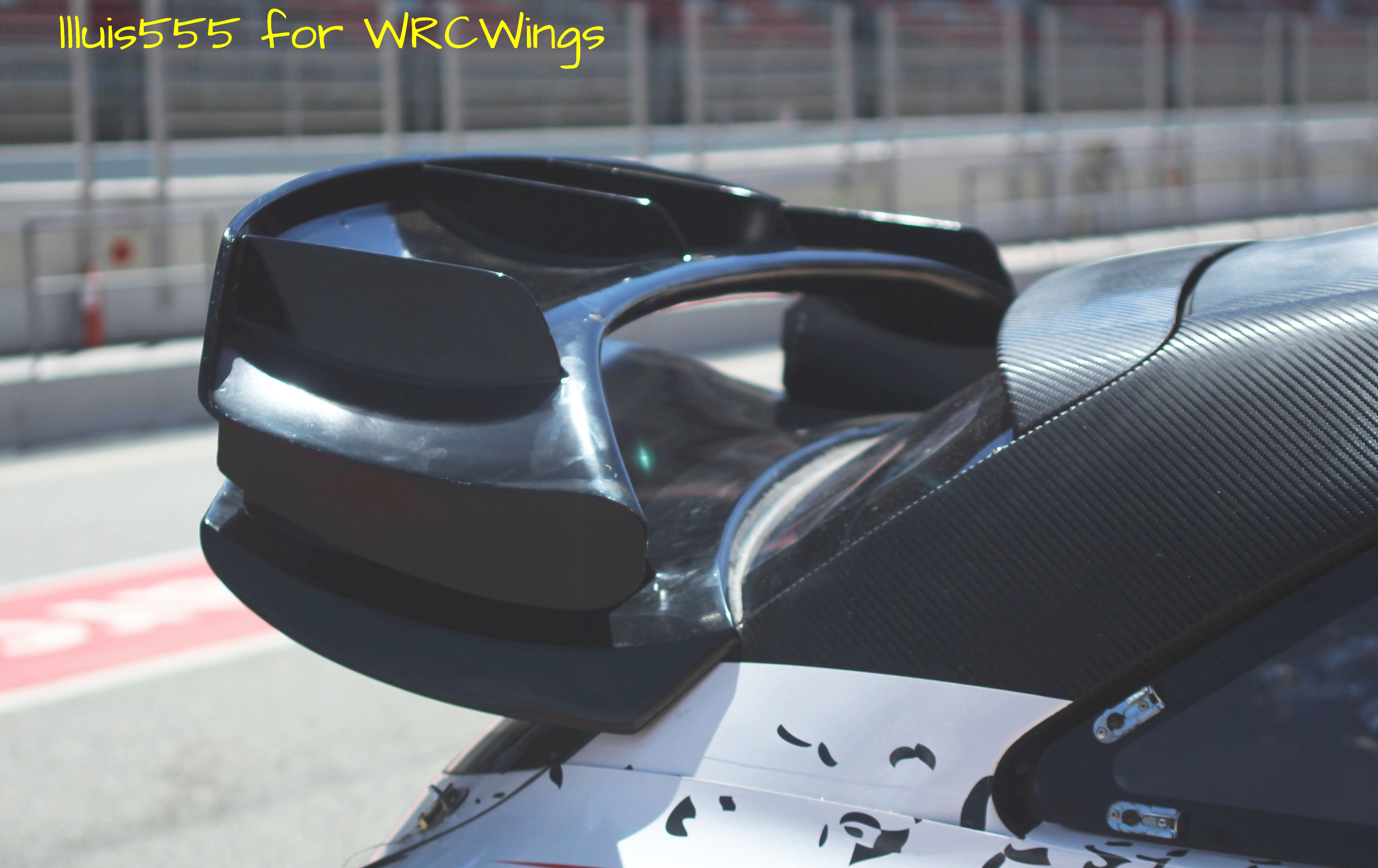 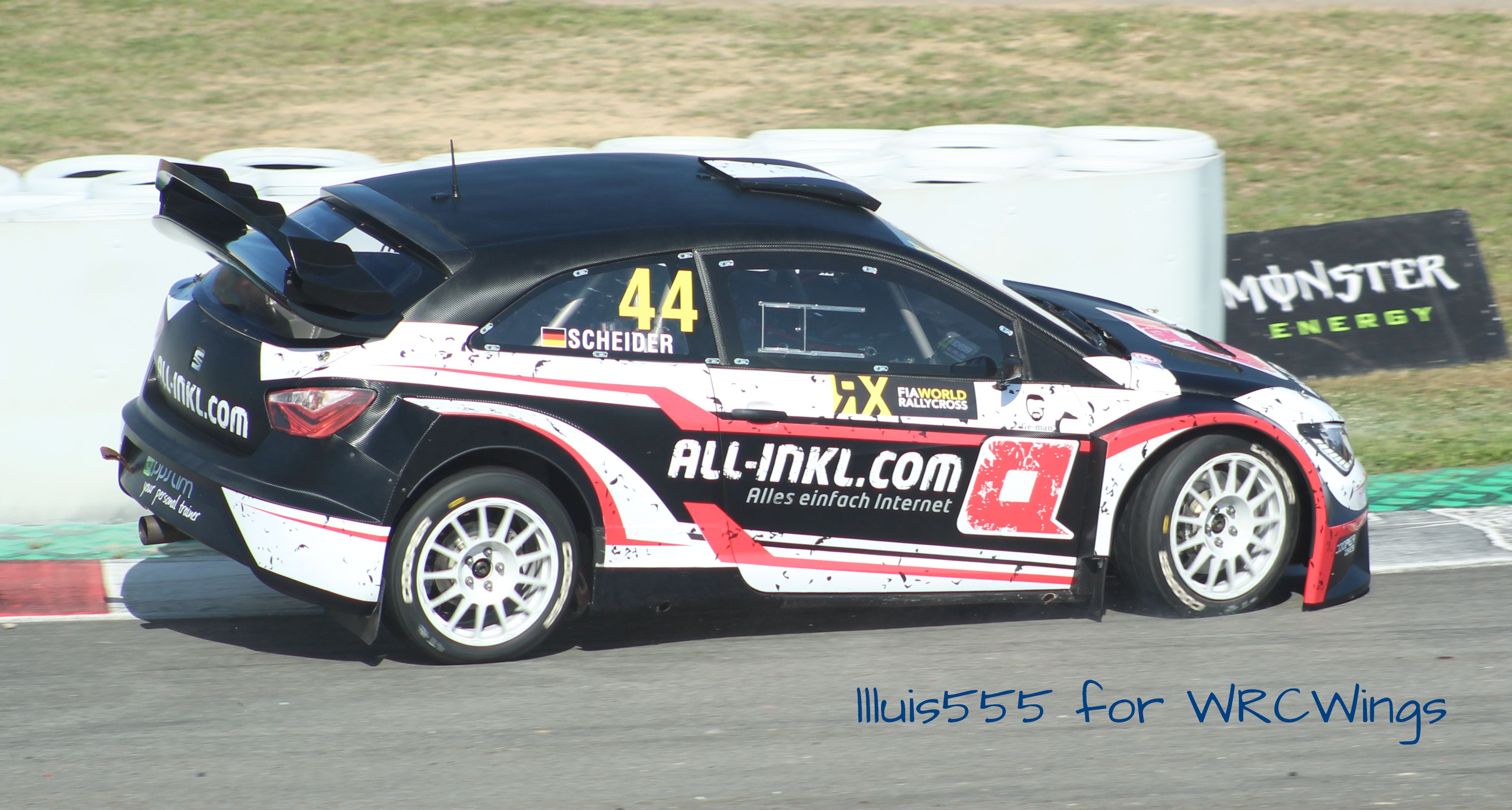 The rear wing of the brand new Skoda Fabia WRX designed by ESmotorsport also incorporates vertical fins, higher than that of the Ibiza, for what the grip when cornering is probably higher. The vertical fins of the Fabia are regularly distributed across the main profile, while the Ibiza includes two fins in the center and two additional fins on both extremes of the main profile. In both cases, a Gurney flap is included at the rear of the profile. 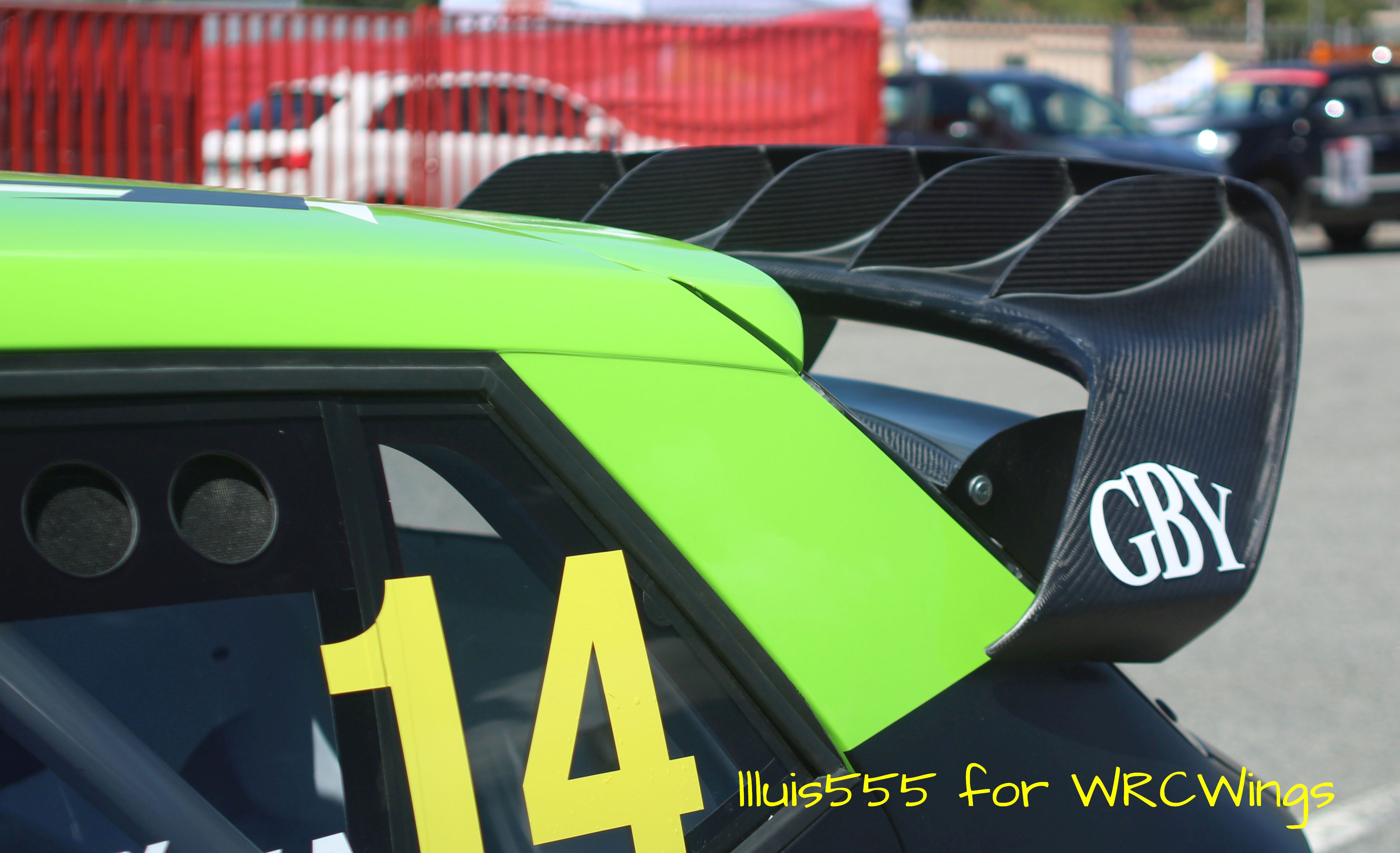 The Fabia also includes end plates (the piece with a GBY sticker). The goal of end plates is double: on one side, they prevent low-pressure air under the main profile flow to the upper side, which would result in a loss of wing efficiency. On the other side, endplates allow generating downforce when the car is sideways. Note that the end plates are bent in on the lower portion. This is one of the singularities of the Fabia, as no other supercar or rally incorporates such feature. 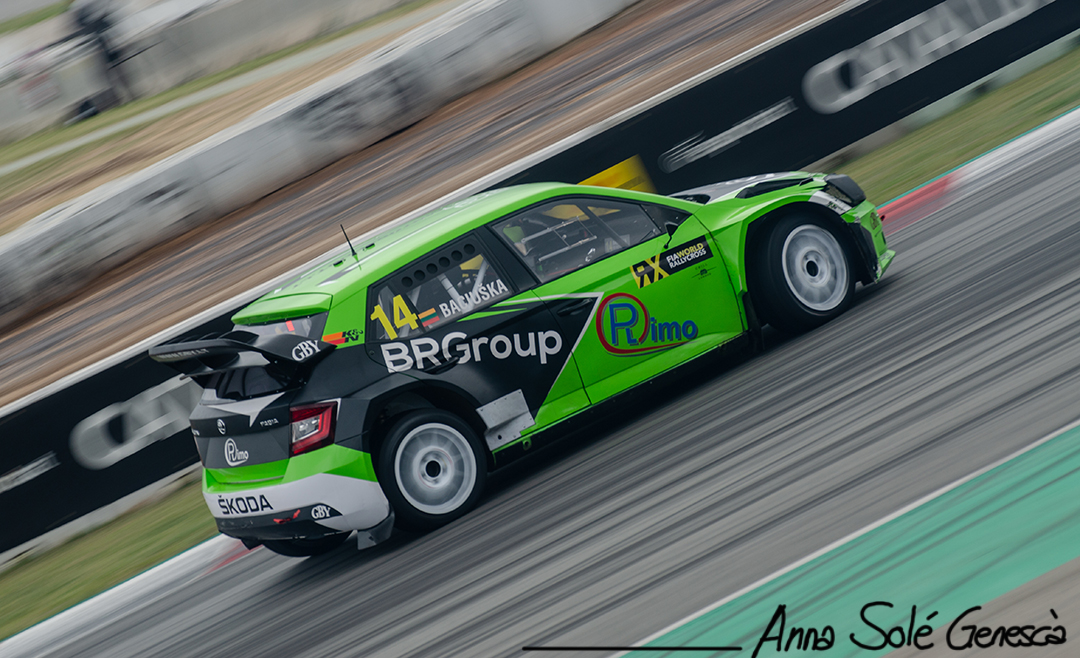 Peugeot is the only car taking advantage of one of the features allowed by the technical regulations: the rear aerodynamic device may be adjustable. The Peugeot 208 designers took advantage of this feature and included an adjustable rear wing main profile, allowing the angle of attack to be changed. Higher angle attack means that the wing is able to generate higher downforce, due to a higher surface facing the air flowing from the roof, but at the cost of higher drag. The picture below corresponds to the configuration used in RX Catalunya 2019, which makes sense, as the Montmeló RX circuit includes only two short straights and numerous high and medium speed turns. The reduction in top speed caused by the additional drag was probably smaller than the gain obtained in downforce while cornering. And probably it will be the configuration used in most of the RX circuits, as they are similar in configuration. 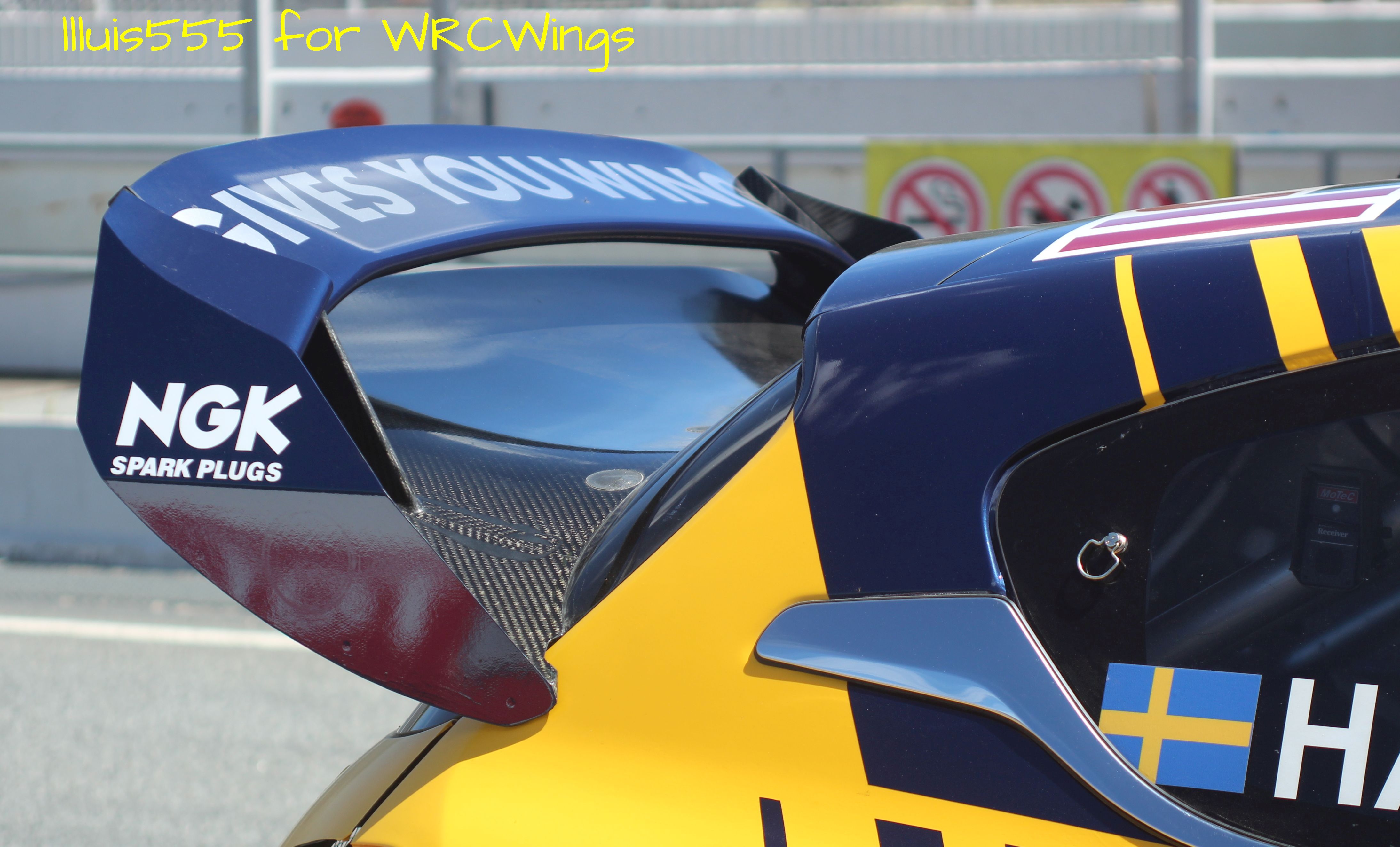 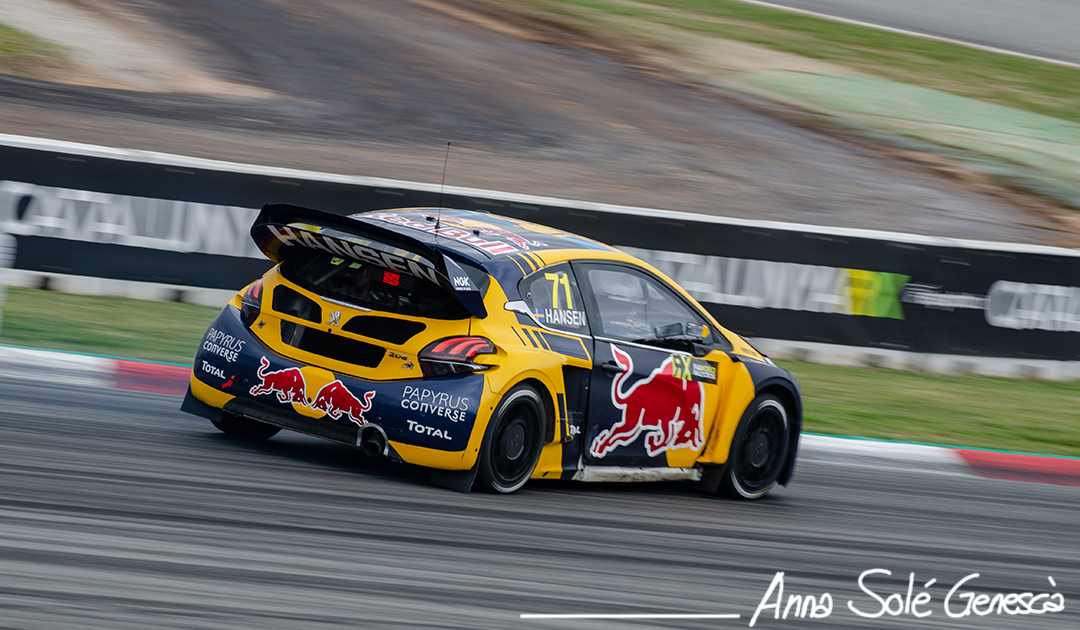 Prodrive also included vertical fins in the rear wing of the GCK Taneco Renault Megane RS. It was the result of multiple studies and wind tunnel tests, as shown in the picture below. Tests were developed during 2017 at British MIRA full-scale wind tunnel, located in Nuneaton (UK). 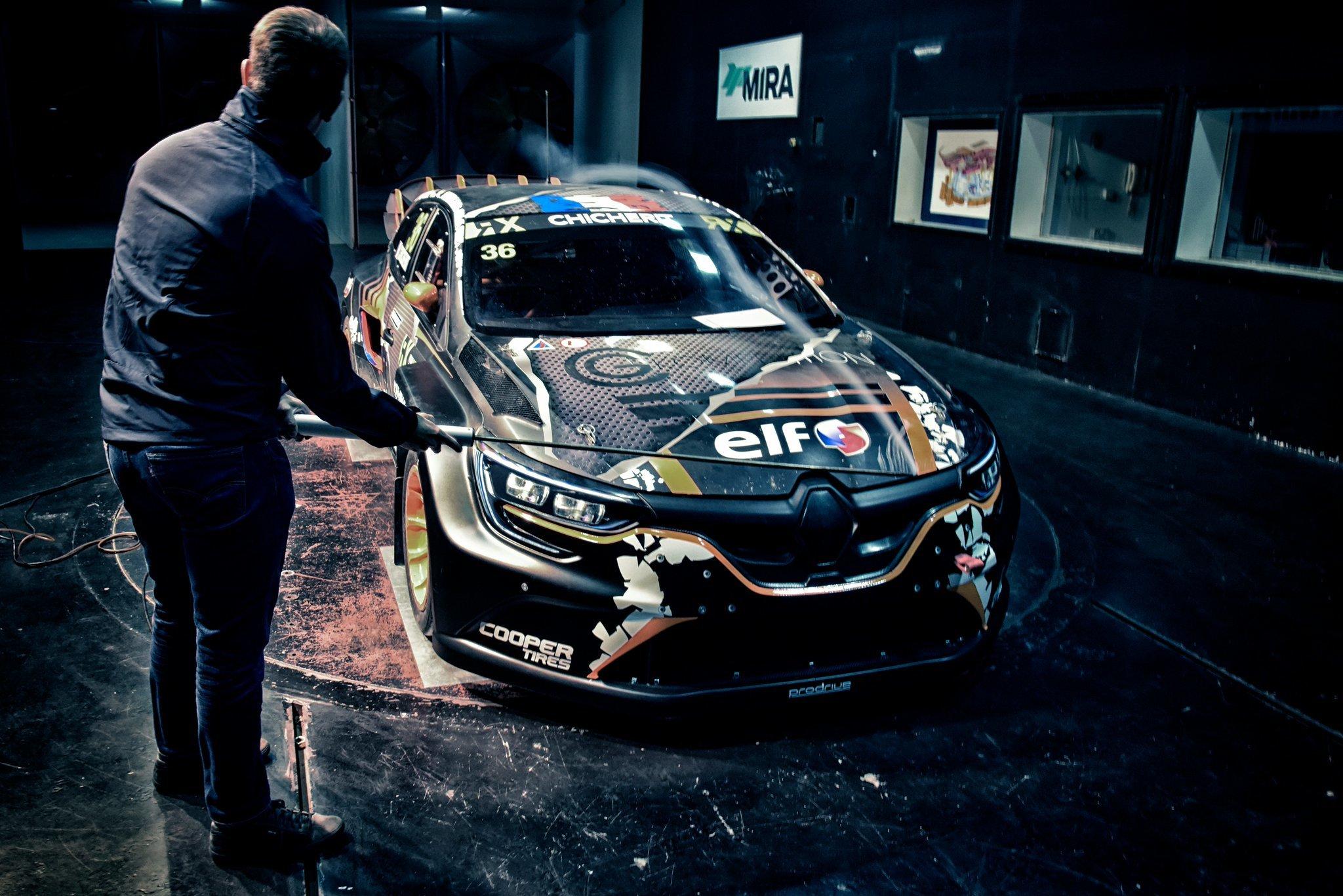 The result was one of the most complex rear wings of the category. It is the only wing which incorporates two winglets on each external side of the endplates, with the objective of using additional air pressure when cornering to generating additional downforce. 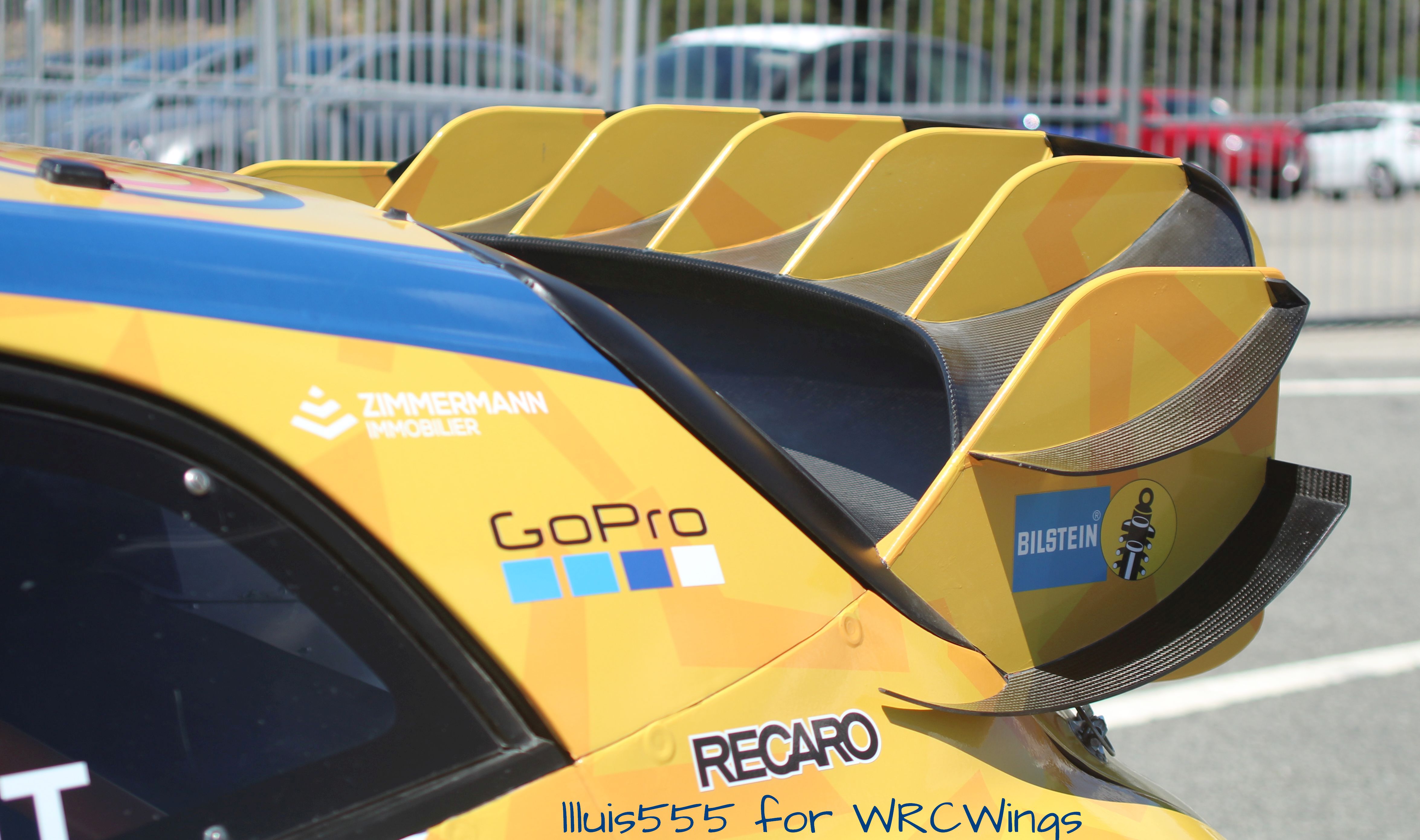 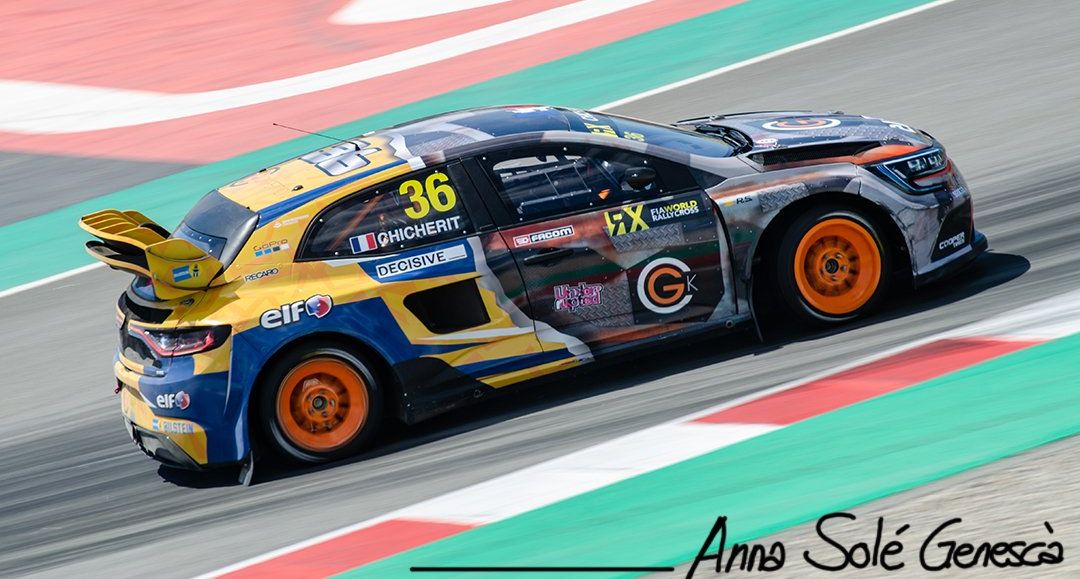 Also, a complex wing design can be seen in the GCK Academy Renault Clio RS, but with smaller vertical fins, irregular endplates and a more prominent lower plate. 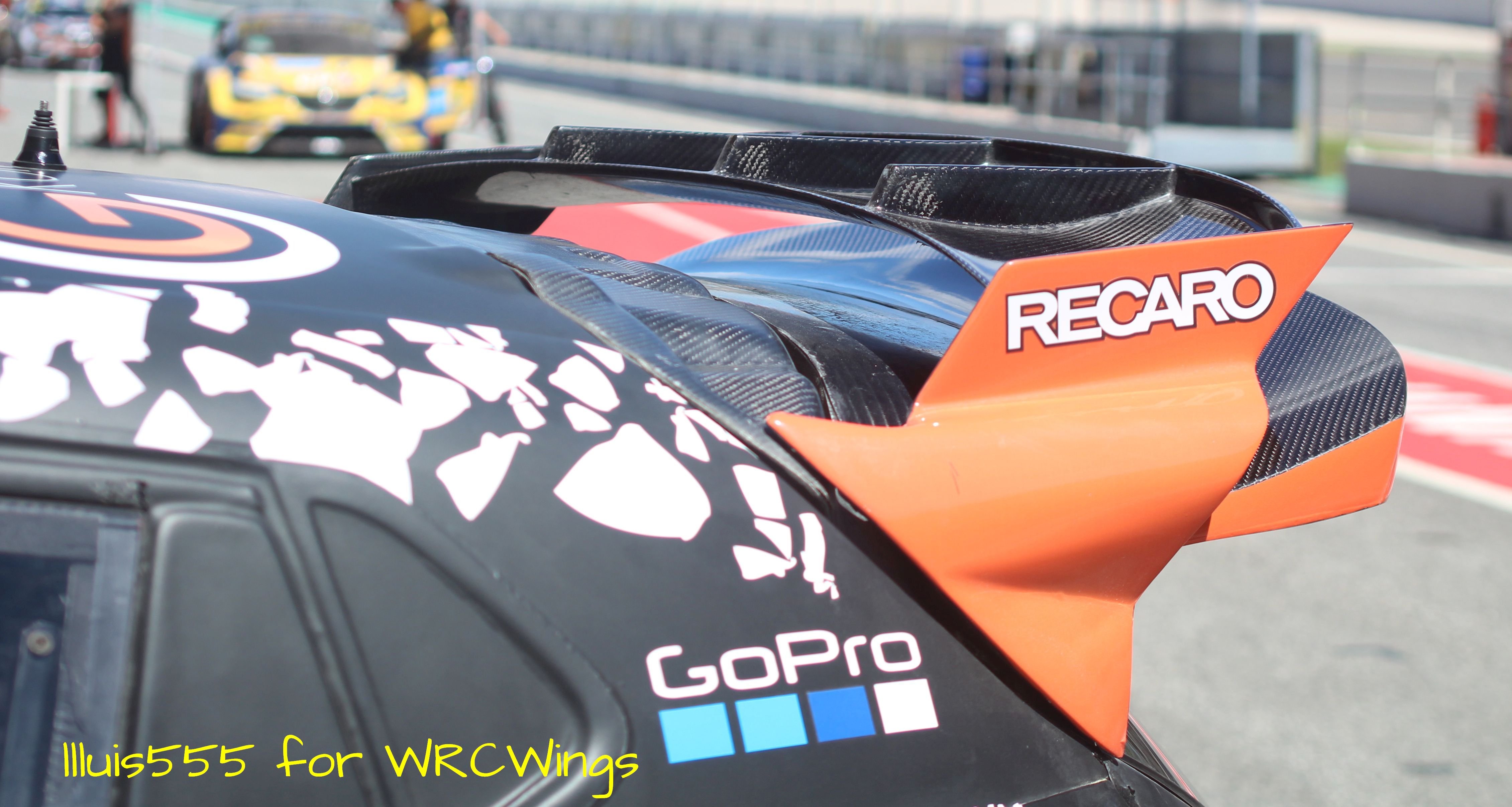 All the Audi S1 aligned in 2019 RX Catalunya included the same rear wing design, with no vertical fins, the tallest, closed endplates and a very small Gurney flap. 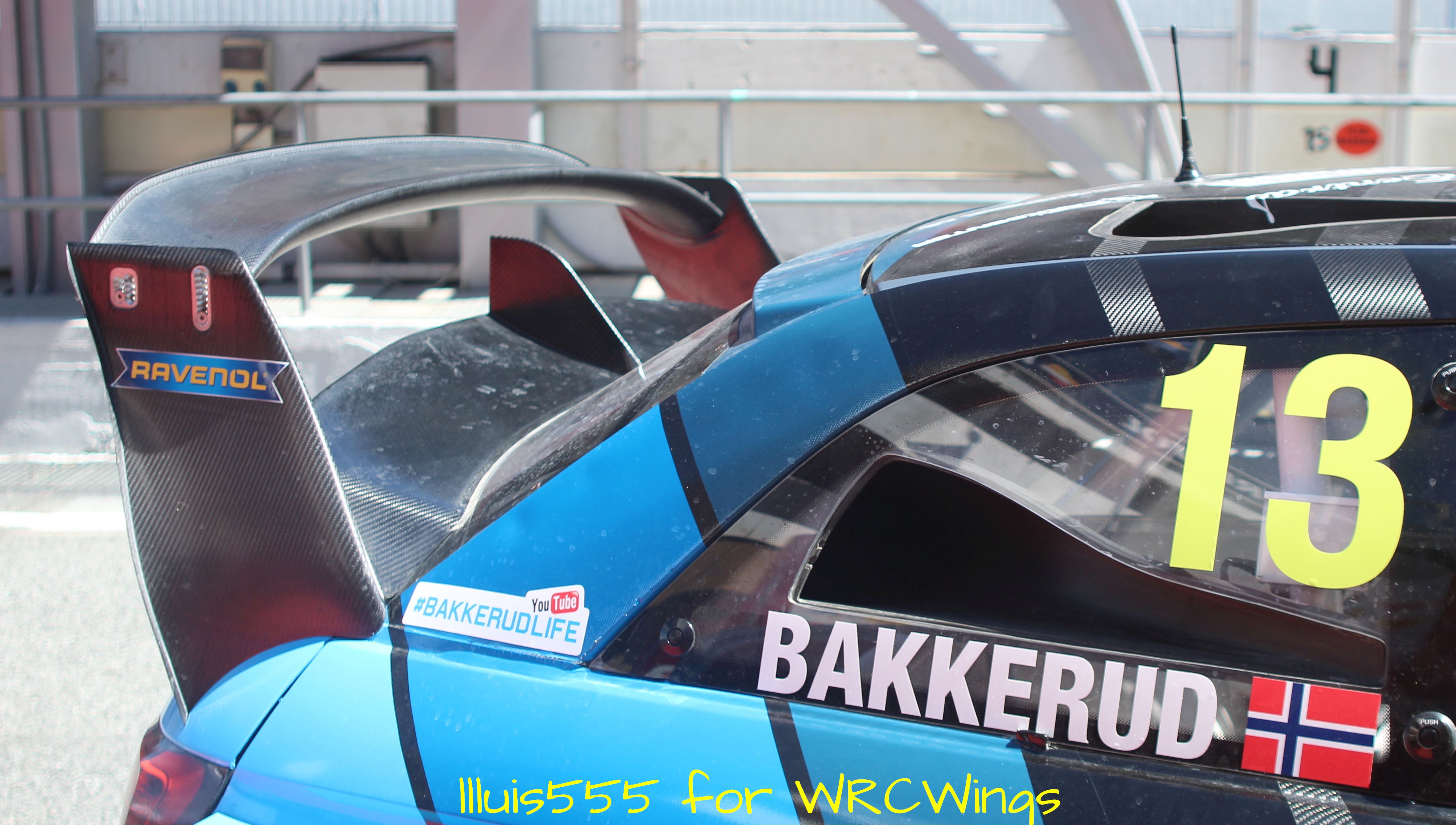 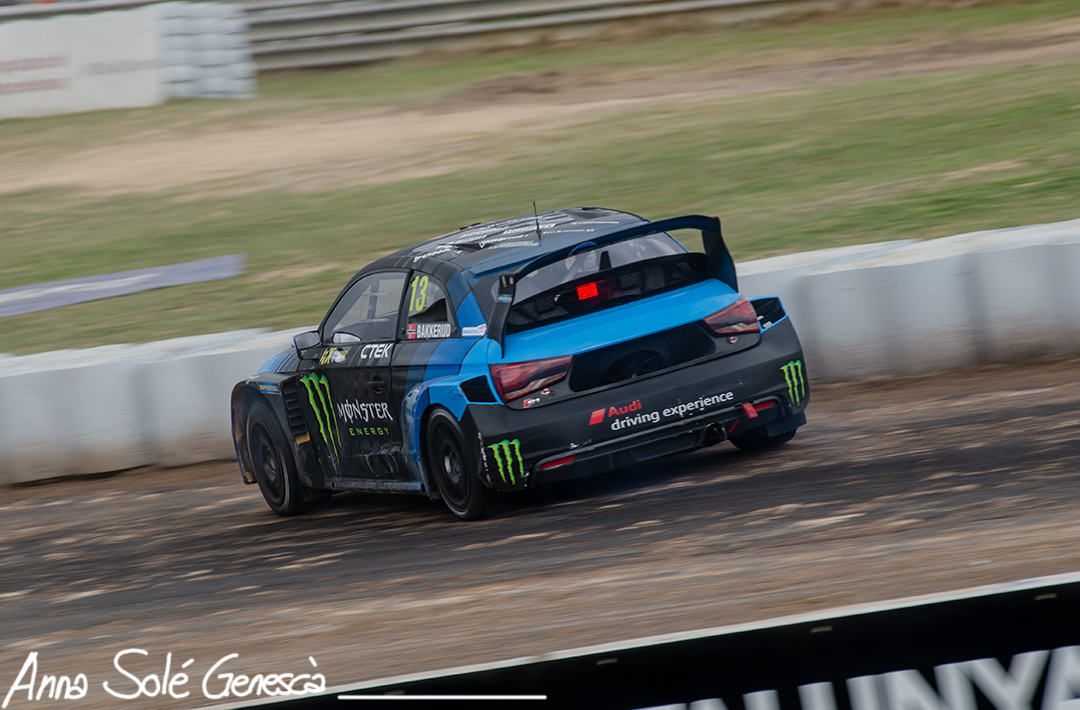 Also, the Audi S1 is the only car including a flow divider in the center of the lower profile, to better channel air towards both sides of the car rear. This is the consequence of the air intakes located on both sides of the roof of the Audi S1, designed to provide fresh air to rear coolers. Due to these intakes, the flow of air in the center of the roof is higher than on both sides. So, the flow divider contributes to making the flow more homogeneous, and the rear wing more effective. 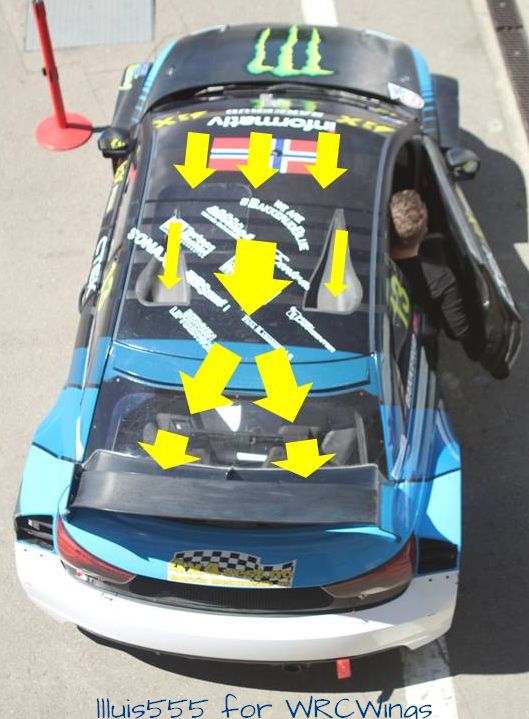 The pool of RX Supercars present in Catalunya RX also included an Audi A1, driven by Tamás Karái. The rear wing of this car is different from that of the S1, with open endplates and a more prominent Gurney flap. As no air intakes are present on the car roof, the flow divider in the lower profile of the rear wing is not required. 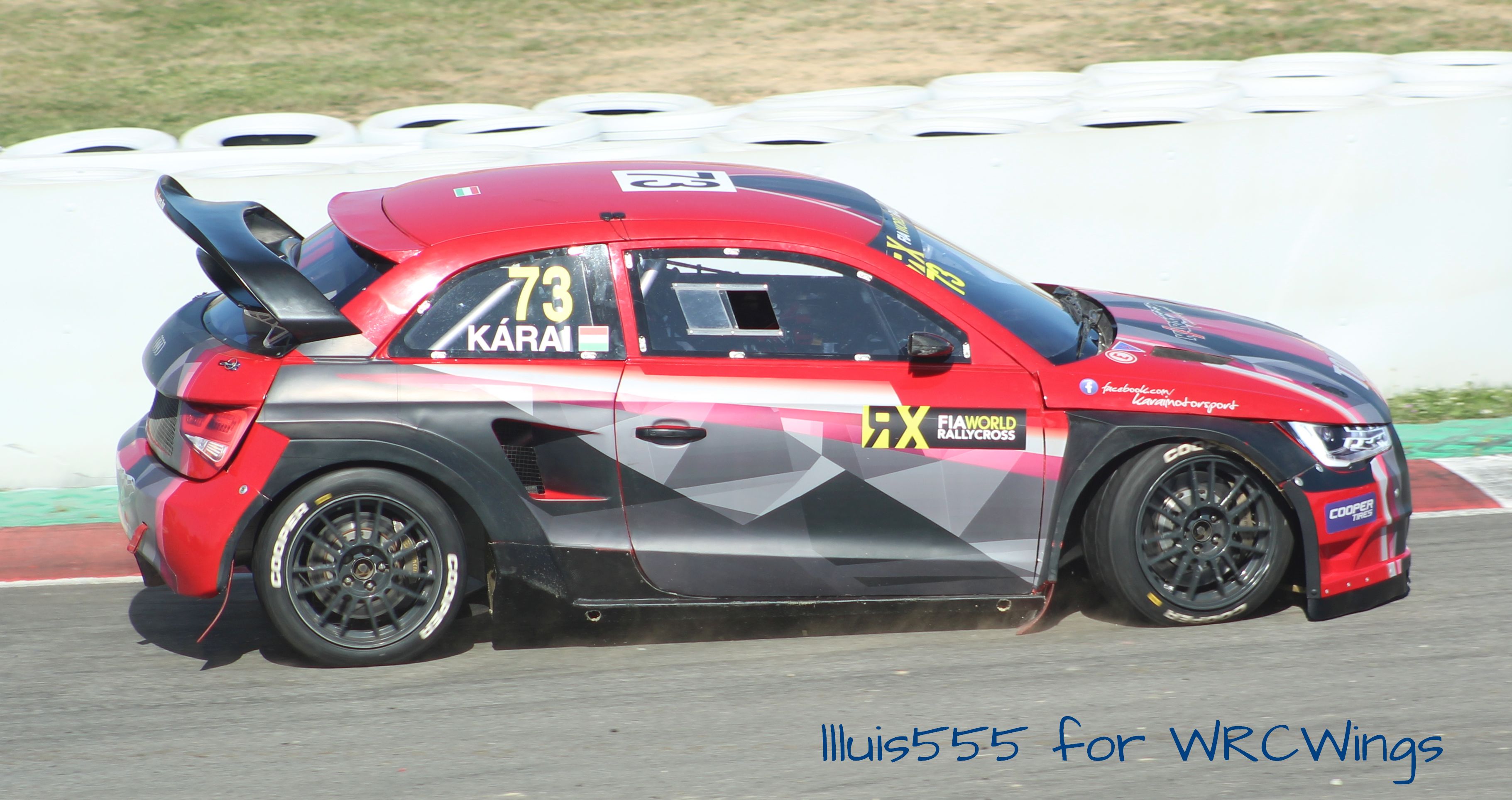 Former World Rallycross Champion Mattias Ekström decided to make a one-event come back for the Belgian event held in Spa from May 10th to 12th. He decided to drive the car with which he got his 2016 title, prepared by JCracetecnik, but with a renewed rear wing, with four vertical fins and open endplates. 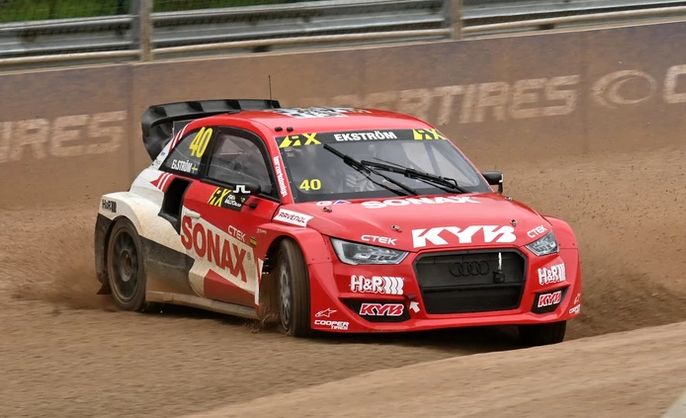 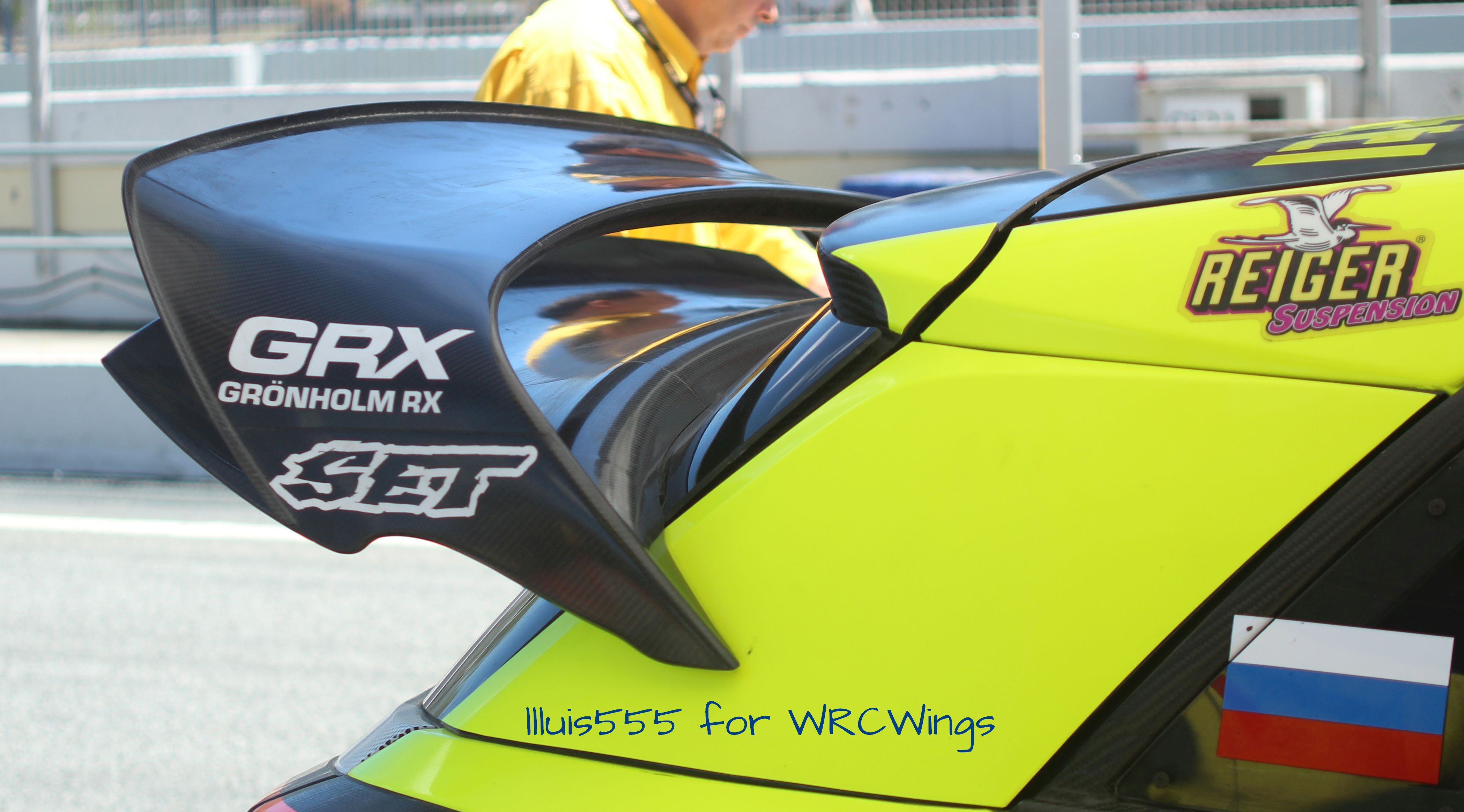 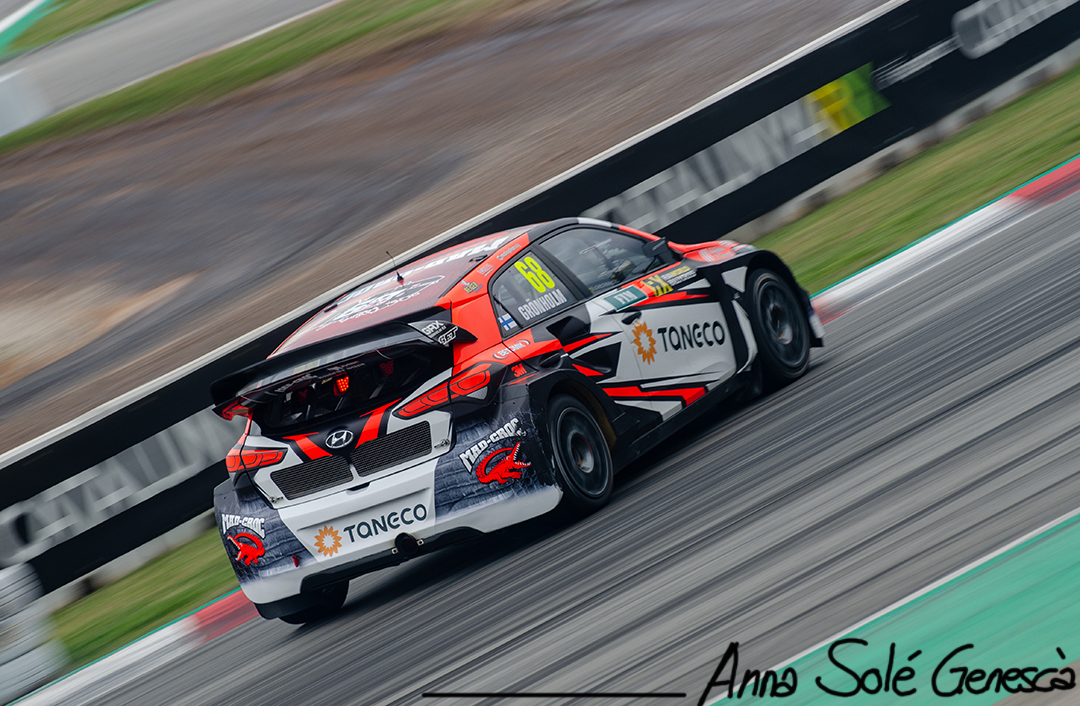 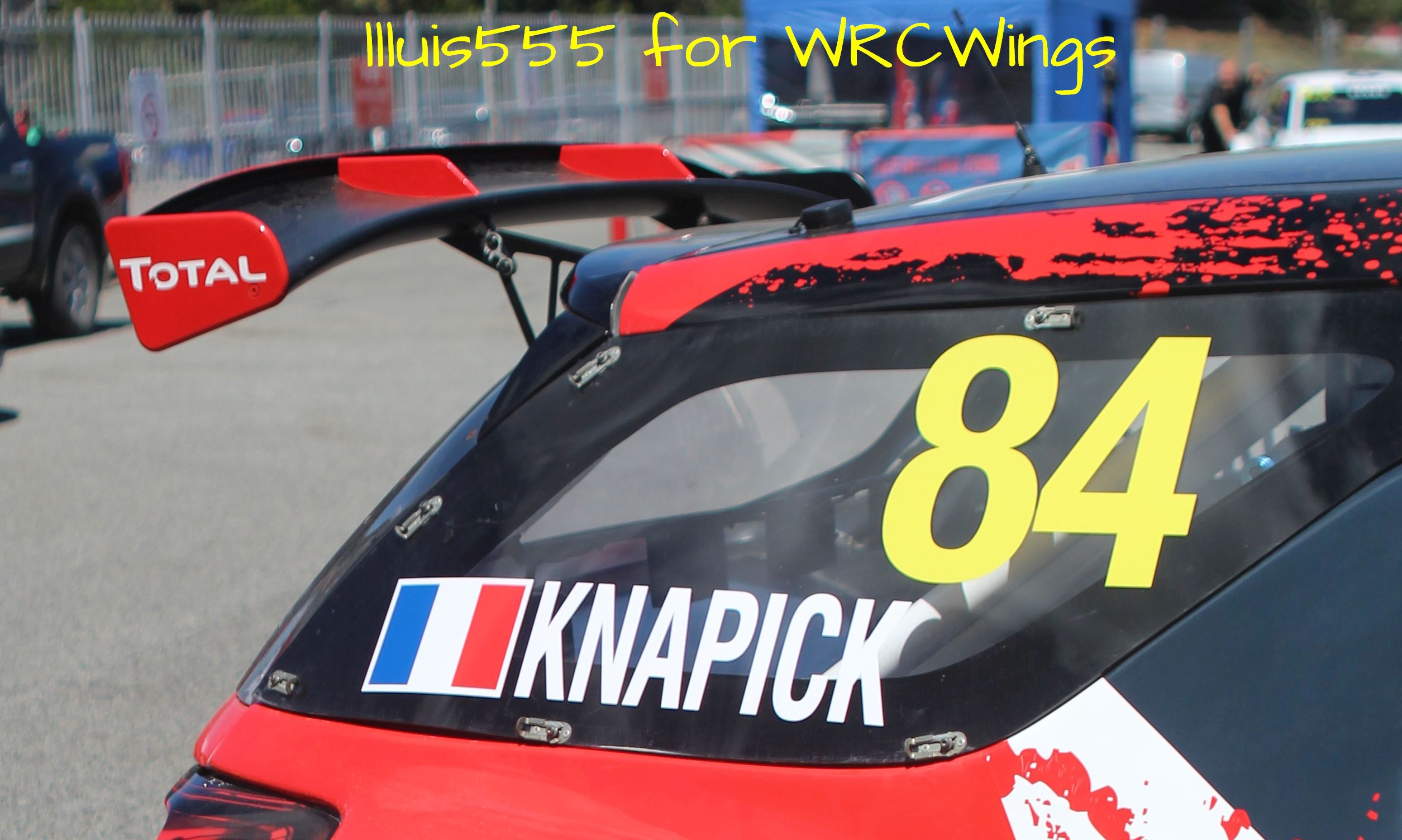 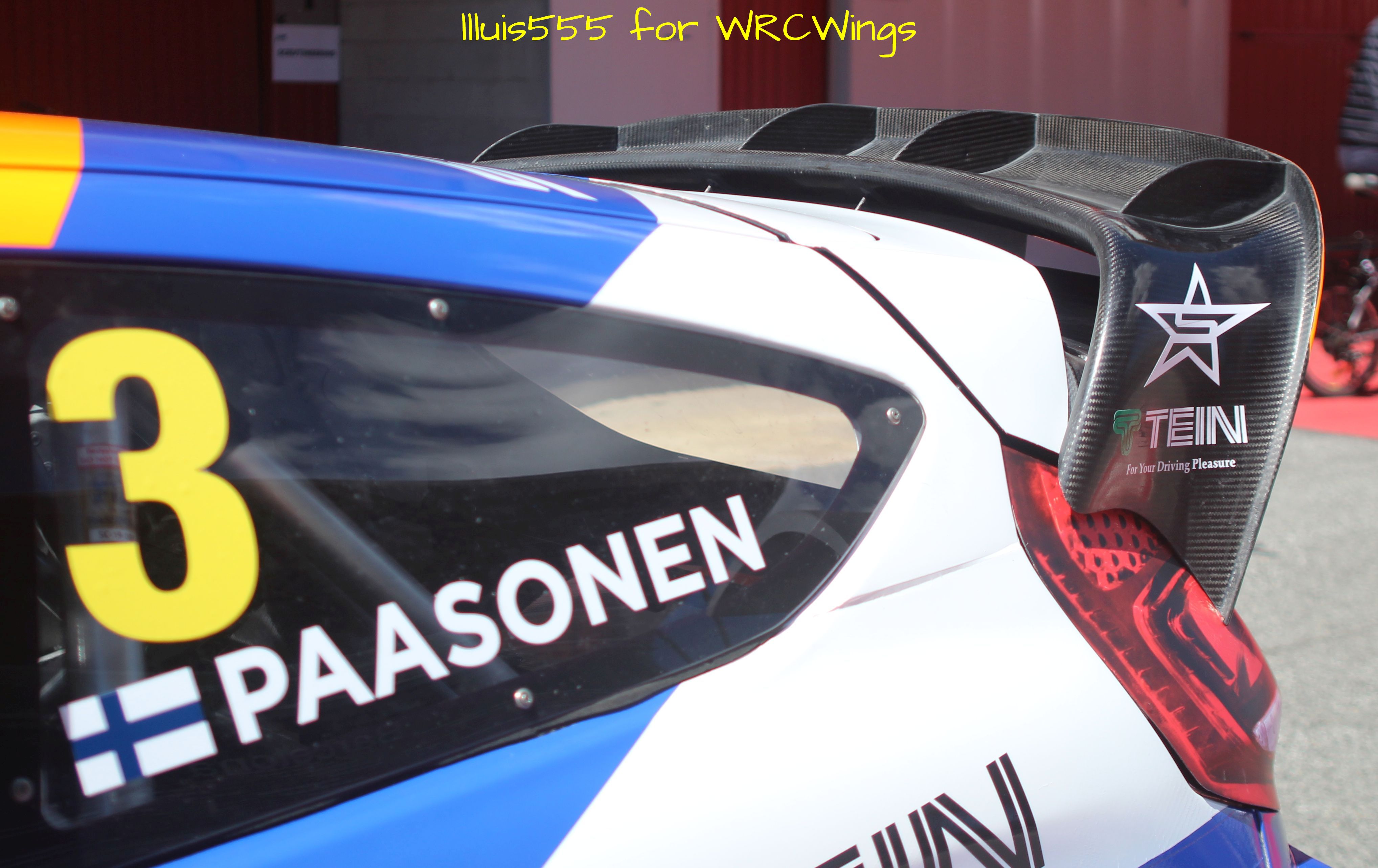 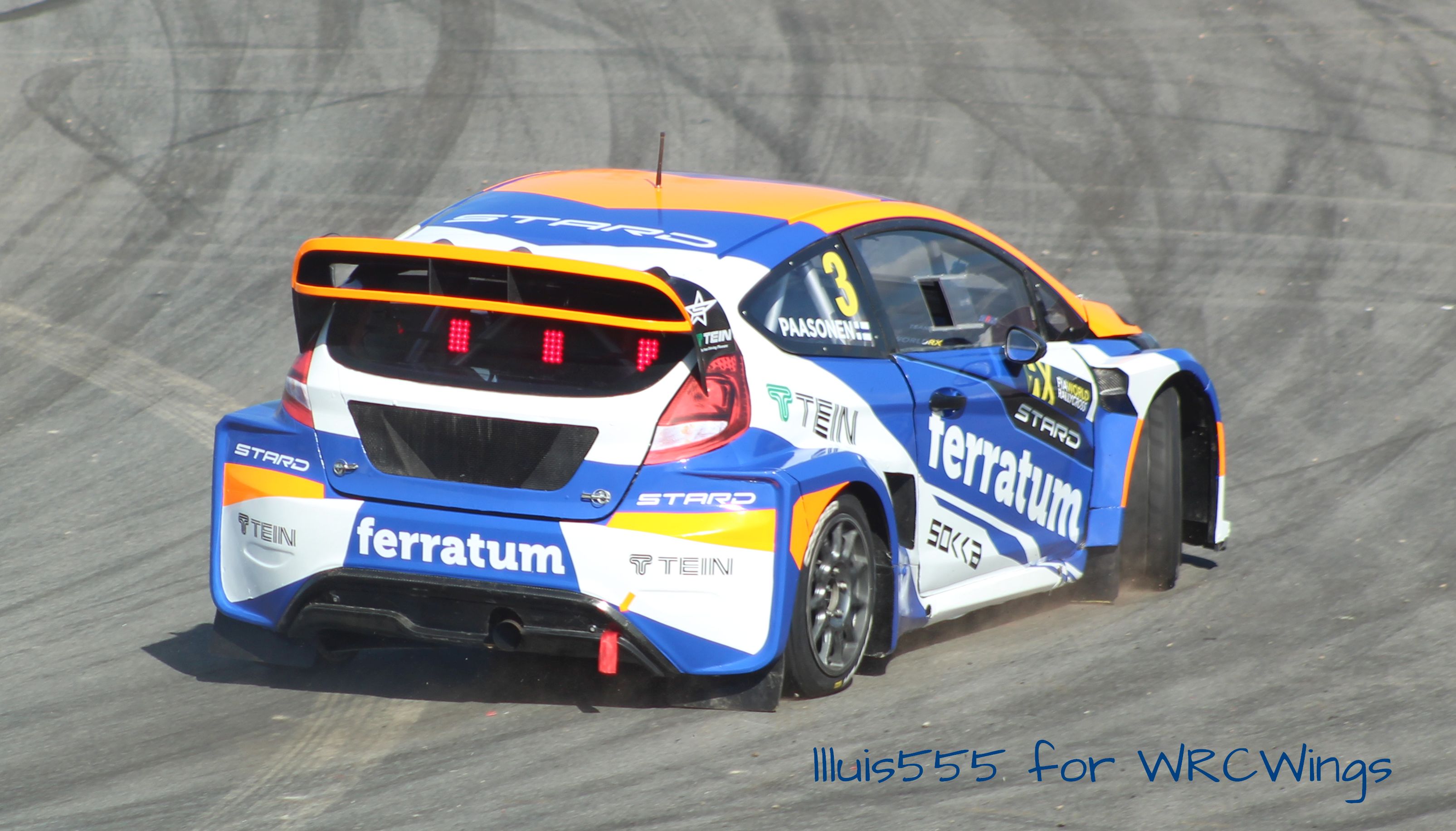 The Ford Fiesta driven by Christopher Hoy in Catalunya RX included a different rear wing design, with open endplates and no vertical fins. 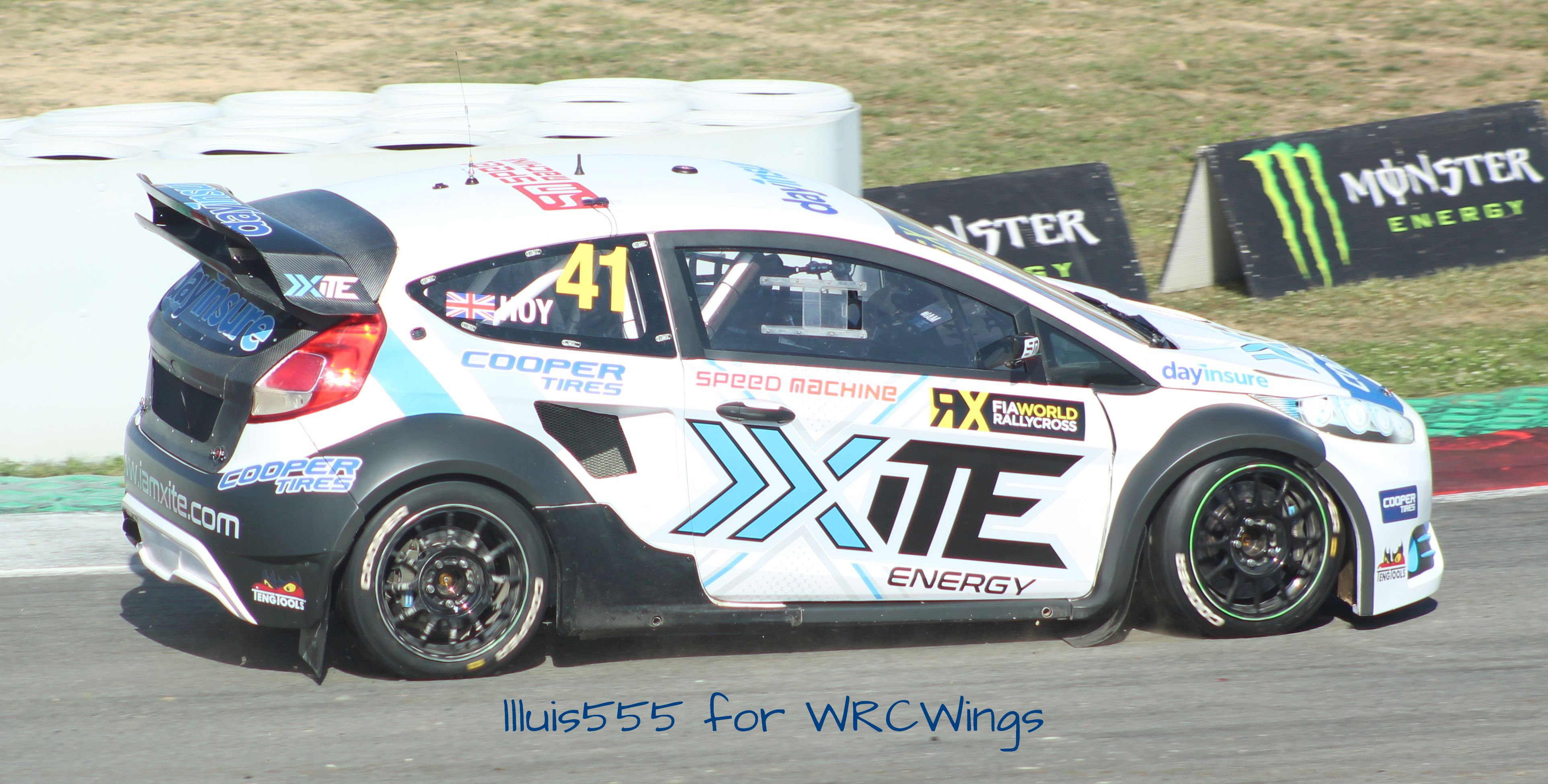 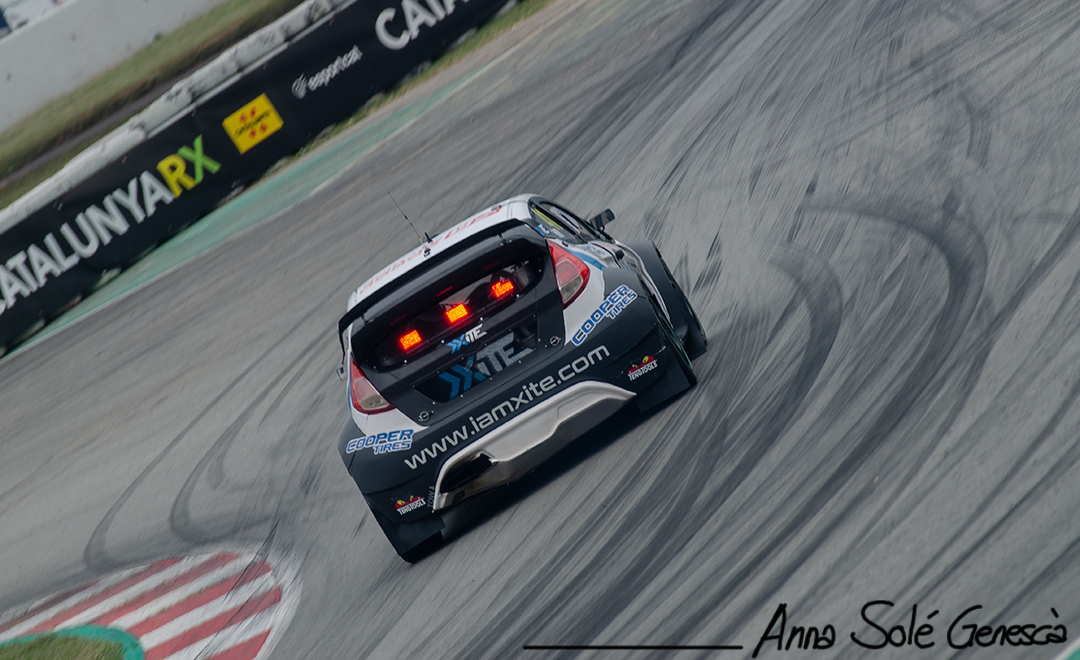 In summary, different cars and different solutions to improve downforce generation at the car rear, in order to better transfer the 600 hp available from the RX supercar engines. But rear wing is not the only element to achieve that: rear diffuser also plays a role, which we will review in a next post.