Far from taking holidays, the long six-week break between Sardegna and Finald have been used by all WRC teams to test and prepare their cars for the coming Rally Finland and its special configuration, which makes it different to all the other events. Also, it is the first event of the second half, where titles will be decided, and nobody can afford now to lose ground with rivals, as mistakes can hardly be recovered in the remaining 5 events.

Hyundai opened the Finland pre-event season when started testing in June, only two days after completion of Rally Sardegna, with Jari Huttunen at the wheel. All teams have devoted a minimum of three tests days for the preparation of the Rally, with the added benefit of selected participation in local events. So, Huttunen took part in Riihimäki-Ralli and Pohjanmaa Ralli at the wheel of the Hyundai i20 Coupé WRC, Takamoto Katsuota was also present in Riihimäki-Ralli at the wheel of the Toyota Yaris WRC, and all teams sent at least one car to Rally Estonia, involving Elfyn Evans, Andreas Mikkelsen, Craig Breen, Esapekka Lappi, or even Ott Tänak (plus Teemu Suninen at the wheel of the Fiesta R5). Conditions of Estonian stages are very similar to that of Finland, for what their participation was used as a test session to test different car set up. 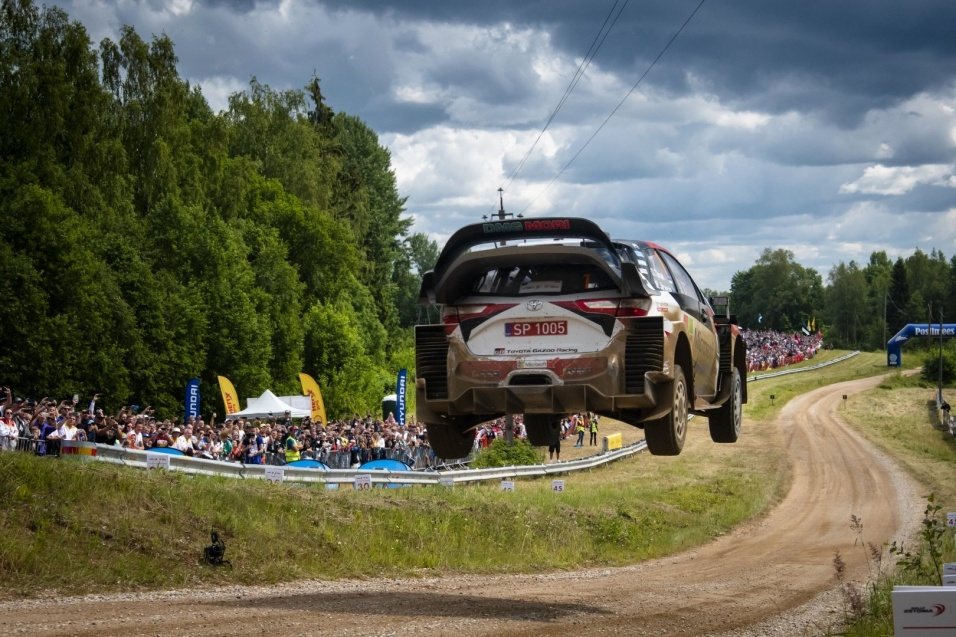 Hyundai is the only team that has evaluated modifications in their aero package during this period, as we already reviewed in a previous post. Citroën was also expected to test and introduce modifications, but as Pierre Budar recently confirmed, the modifications of the aero package should not be expected until later or even the end of the season.

The images from the multiple videos taken by rally fans, as well as from some of the excellent photographers present in the tests, are a really useful tool to evaluate the aero performance of the cars to contest the Finnish event.

Jumps represent the most iconic image from Rally Finland. We already reviewed the aerodynamics of a WRC car while jumping, and now we will take advantage of jumps to evaluate the aero balance of the cars. 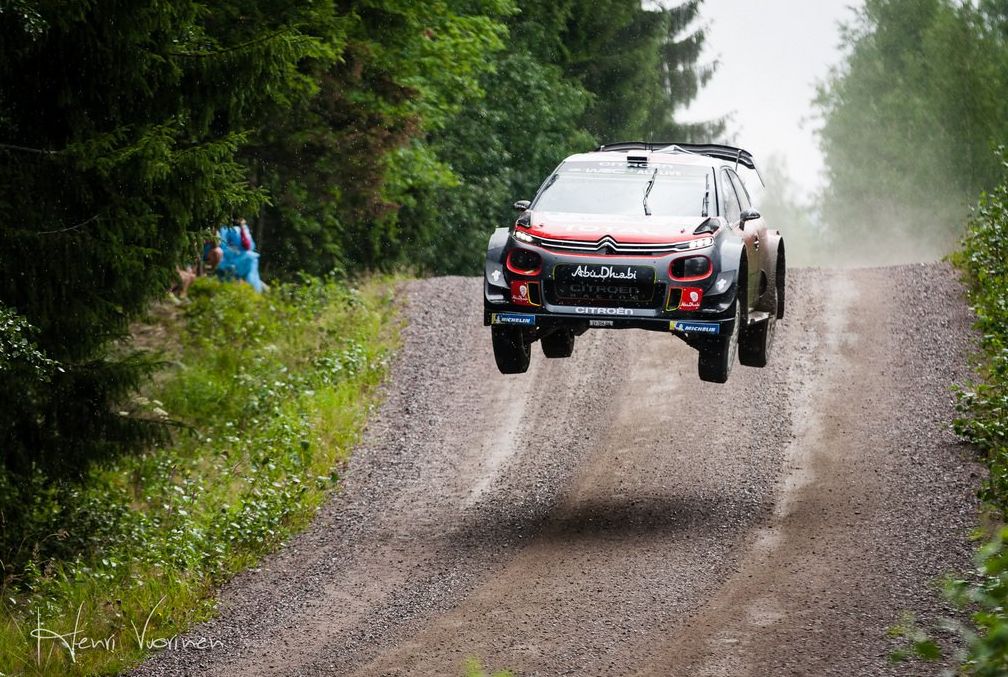 While flying, and unless the driver heavily brakes just before the jump, cars tend to take-off in a rather horizontal position, or sometimes with the car nose slightly pointing up, if the car is at full acceleration. During the flight, aerodynamics keep working on the upper side of the car; no downforce is generated under the car, as the distance to the floor is high. Due to the car shape (kind of a wing), lift is expected to appear (opposite to downforce), as air flows faster over the car than under the car (so the pressure is higher under the car, by Bernoulli). The pressure difference is what pushes the car upwards

But the airflow impacting on the surface of a car with devices such as dive planes, flat fenders and big rear wings contributes to compensating, pushing the car down. For the analysis, we will assume that, if the car design is balanced, the car will land in a flat position, and all four wheels will touch the ground at approximately the same time. If the car is unbalanced, the nose or the rear of the car will land first, leading to unbalanced behavior which surely results in a poorer car handling and a loss of confidence by the drivers, what at the end means to face next jump at a lower speed. 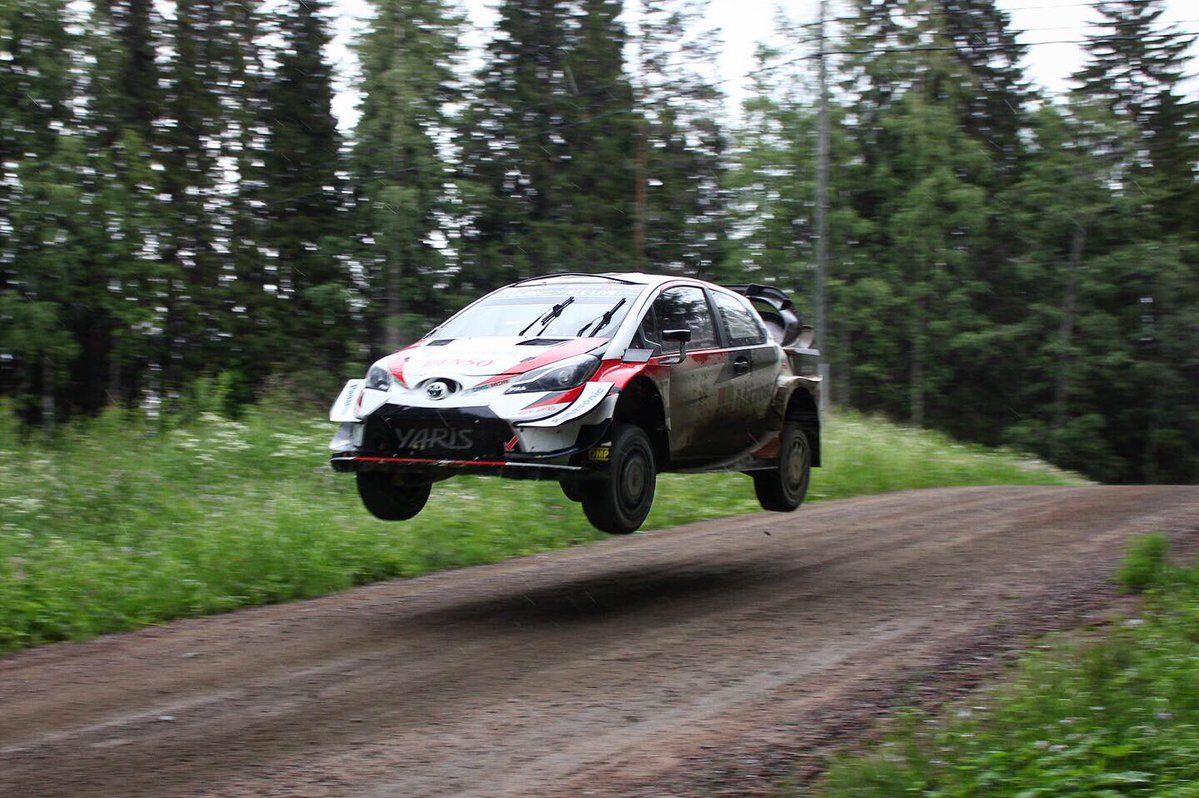 Excellent videos from Nettirabbi (Jari Matti Latvala test) and WRC Timo (Kris Meeke test) show that the Yaris WRC continues to be the most aero balanced car. In most of the cases, the car lands after a jump in a flat position, and all wheels touch the ground at the same time, allowing their drivers to continue driving flat out after the jump. 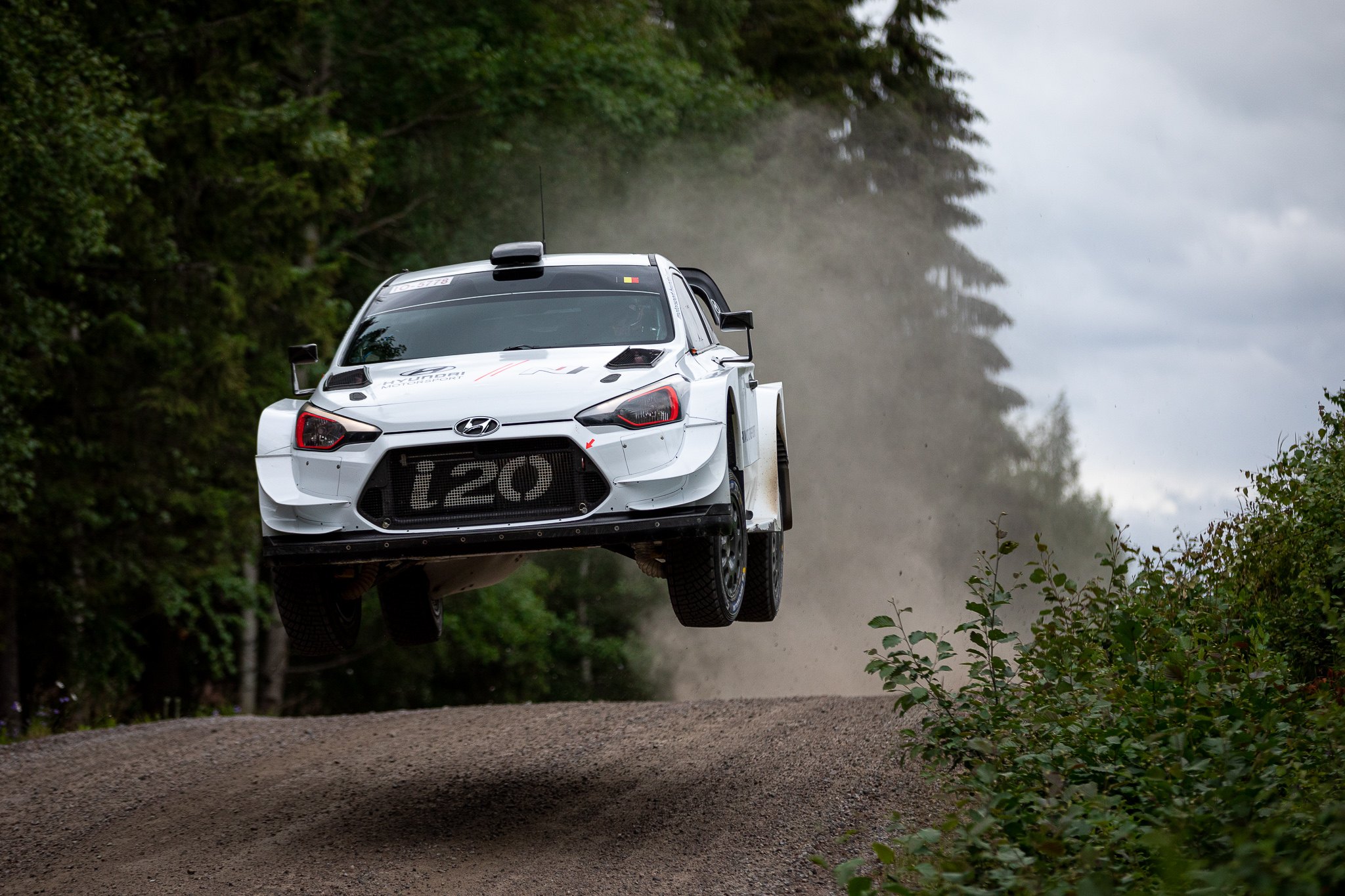 The multiple videos showing the tests of Hyundai’s new aero package show that the car balance has improved. Images from 2018 Hyundai tests in Finland (such as this Nettirabbi video from Andreas Mikkelsen 2018 test) show that the nose of the car is reluctant to land and rear wheels get contact with the ground earlier than front wheels. On the contrary, video from Nettirabi of Andreas Mikkelsen 2019 test) with the new package show that this trend has been minimized, and the car is more balanced, although still perfectible. 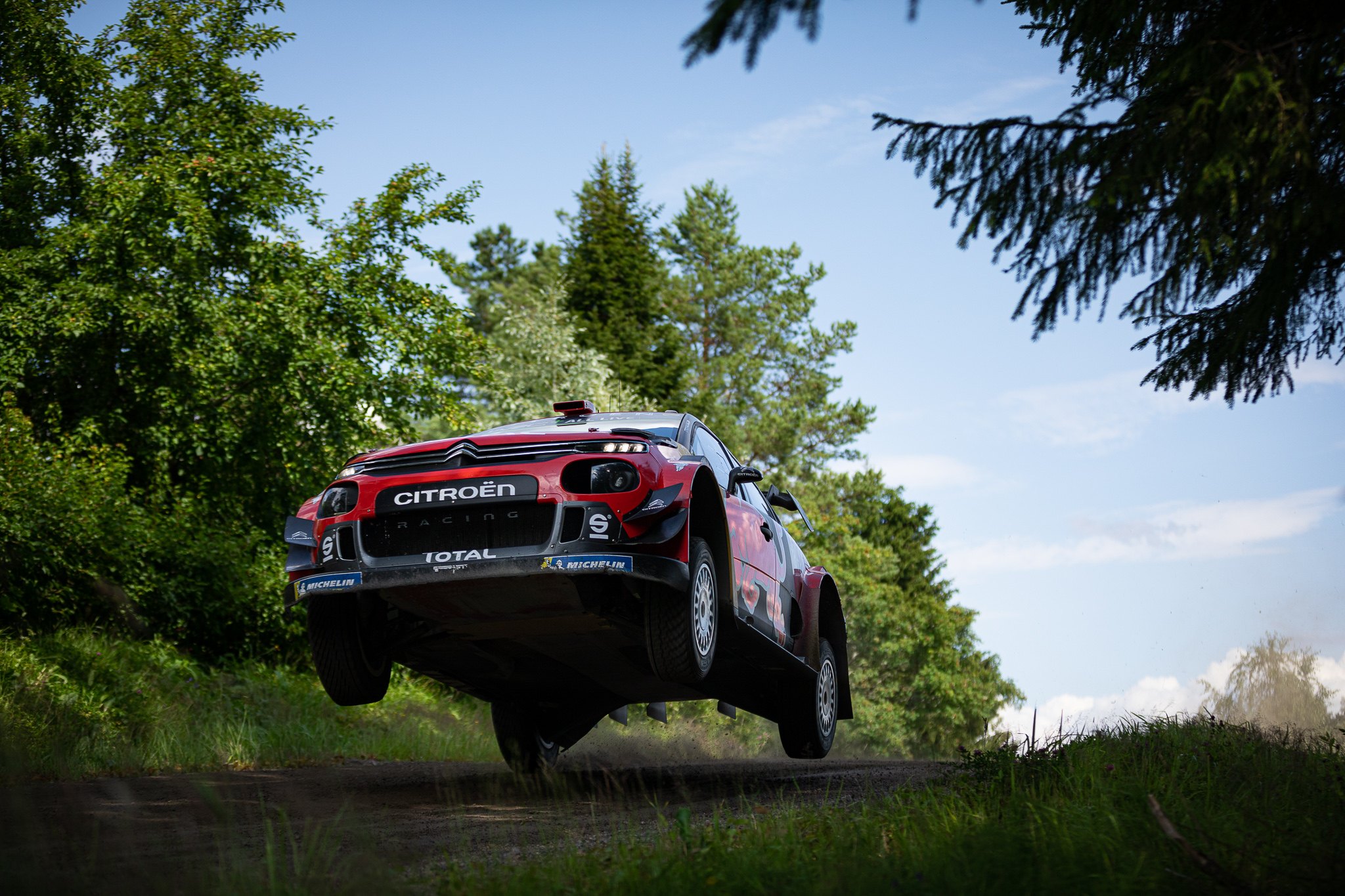 Complaints from Esapekka Lappi about the performance of the Citroën C3 WRC are fully confirmed after reviewing any of the videos taken from Citroën test days (such as these from Nettirabbi on Lappi’s test and Ogier’s test). The car shows a clear trend to nose up before every landing, which makes really difficult for the drivers to continue attacking after every jump landing. Pictures also corroborate such behavior, which should be corrected with the expected new aero package. It will surely include modifications at the car front to increase downforce generation there. 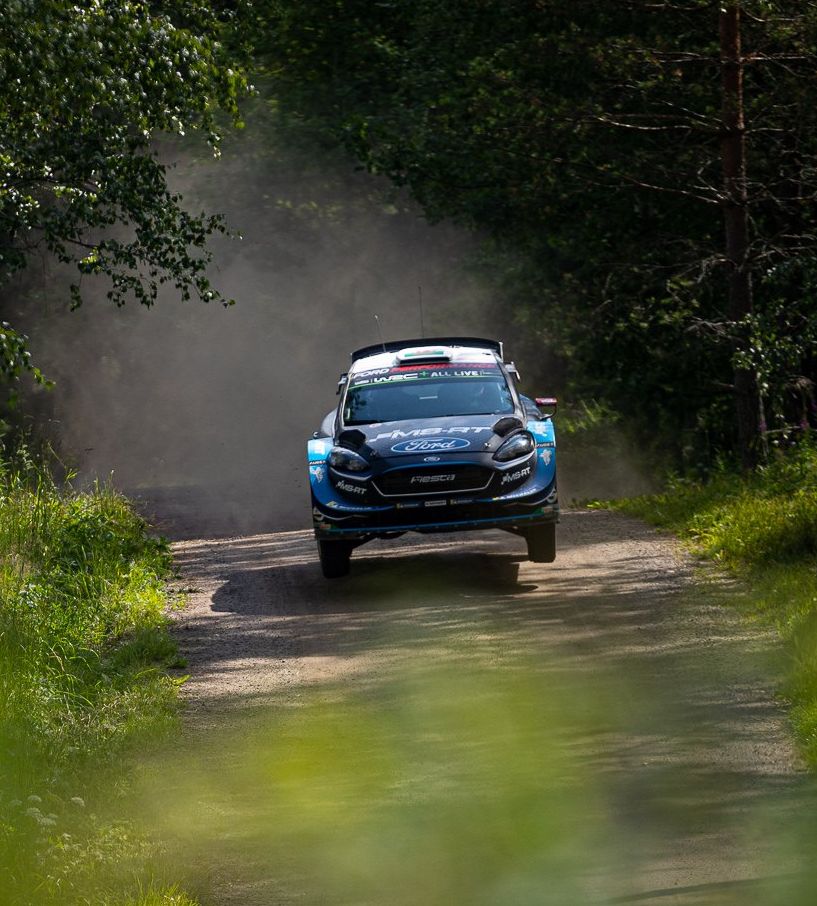 Only a few videos are available from the tests carried out by M-Sport. The images from Corentin Rallye video (Teemu Suninen test) show a balanced behavior, but with a slight trend to nose down when landing. This would be the consequence of a higher load at the car front, which should be compensated by a higher load at the car rear…or decreasing the load obtained at the front. But the unbalance is small, compared to that of the C3.

Toyota is the team who has devoted more tests days in Finland during this period: at least 6 days plus an extra day with Valtteri Bottas and Juha Kankkunen, same as Hyundai (6, of which 3 by Huttunen), while M-Sport and Citroën have spent just 3 days.

According to our records, Citroën is the team who has spent more official test days in the season to date (28 days out of 42, that is a 66%) followed by Hyundai and Toyota (23 days each or 55%) and Ford (16 days or less than 40% of the days available). But Citroën and Toyota have already developed their Rally Germany pre-event tests. So there is still room for many test days for most of the teams, to spend in preparation of the remaining events, as well as after Rally Australia, in preparation of the next season.