2019 edition of Rally Finland ended up yesterday with the results we all know: Toyota dominated most of the rally, with only the Citroën C3 WRC of Esappekka Lapi and Janne Ferm being able to fight with the Japanese cars, while the performance of Mikkelsen and Breen during all weekend confirmed the improvement of the Hyundai i20 Coupé WRC with the new aero package. But some other details on aero need to be reviewed, team by team, in the fastest event of the year, that is, the event where aero is most important than anywhere else.

The superb performance of the Toyota trio (incidents apart) confirms the optimal aero balance of the Yaris. Images all over the weekend show the car is stable even during the frequent jumps in Finnish stages, allowing their drivers to concentrate on the driving and pushing hard all time. Aero balance is so good that you can see, in some jumps, how the car tends to equilibrate while flying, instead of nosing up as it happens with the other WRC cars.

The performance of the car is so strong that allowed Jari Matti Latvala and Miikka Anttila to set the fastest time in the SS15 Leustu 1, right after losing the rear left fender in the previous stage. Losing a full rear fender means air is vented with no control, resulting in a chaotic car wake, which translates into higher drag and lower downforce generation.

The Citroën C3 WRC kept showing all weekend a poor aero balance, especially on jumps, with a nose up behavior already seen during the pre-event tests, but to a lesser extent, thanks probably to the suspension setup work all over the event. Even so, Lappi and Ferm were able to fight against the Toyotas all the weekend and losing only 25 seconds to Tänak and Järveoja at the end of the event. Maybe the different suspension setup used by Lappi contributed to such good performance, but Ogier and Ingrassia also showed good rhythm, in spite of the bad starting position and the driver physical problems on Saturday. 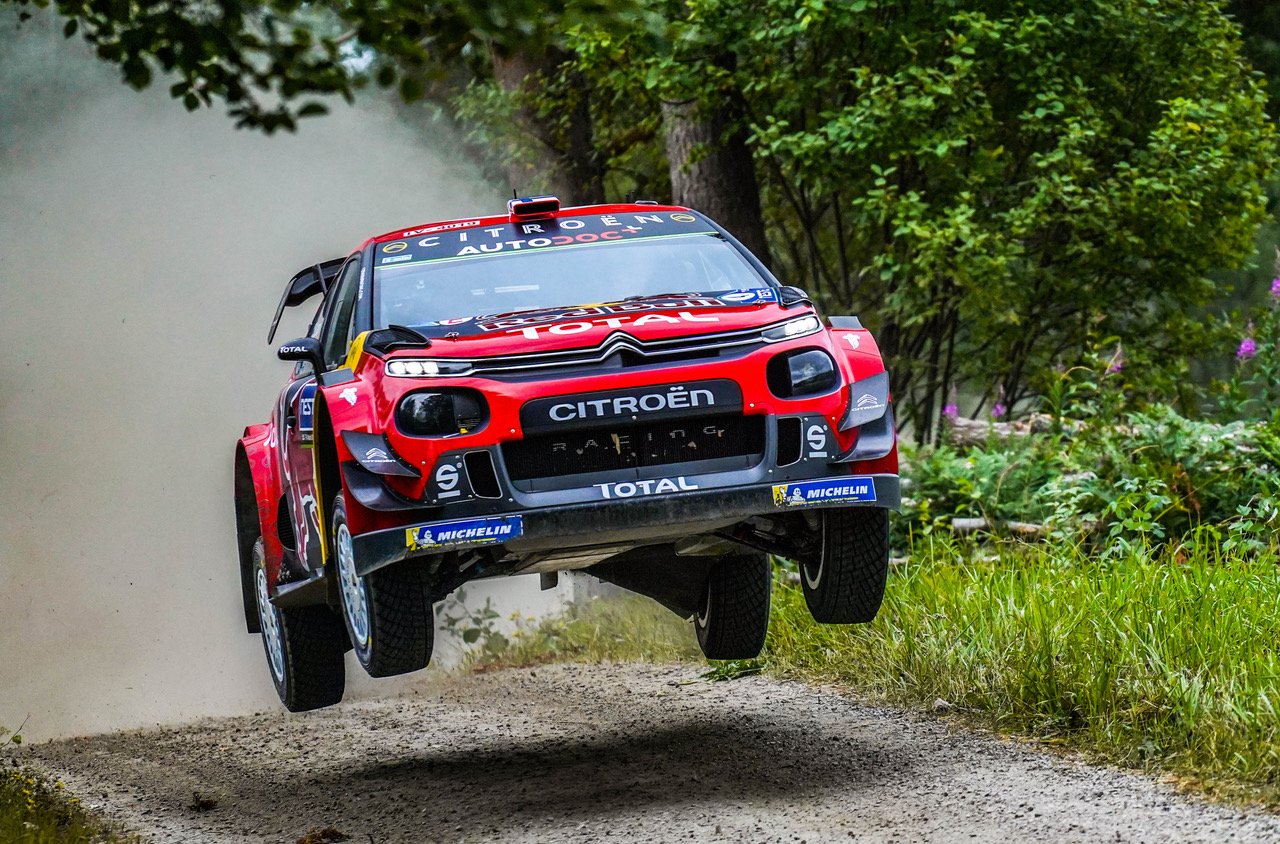 Lappi kept claiming for higher downforce at the car rear during rally interviews, but this will not arrive until the next aero package is finished and tested. Pierre Budar confirmed to Martin Holmes in this recent interview for Rallysportmag.com, that they keep working on it (the new aero package), but they’re not ready yet, for what it will probably appear in the next season. 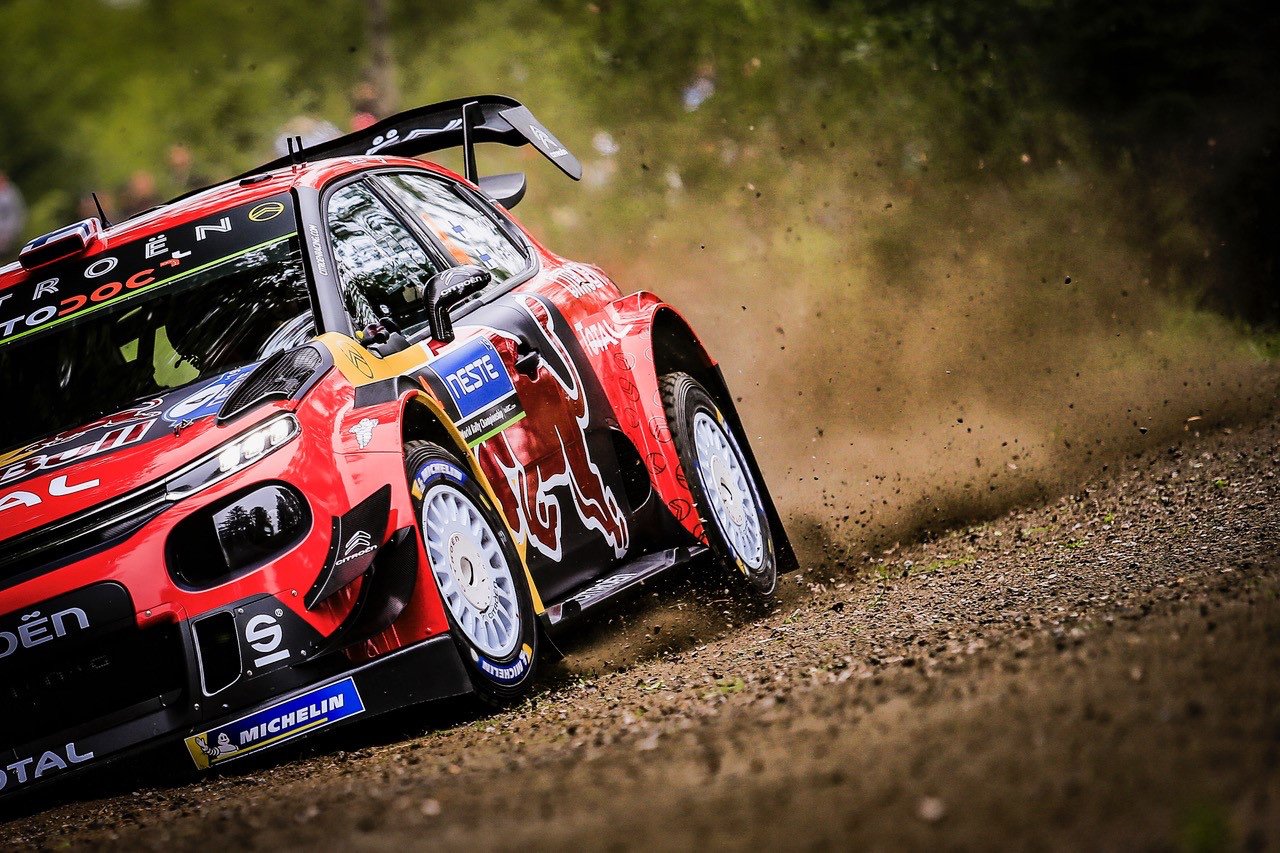 The great performance showed by Mikkelsen/Jaeger as well as by the newcomer duo (Breen/Nagle) confirms that Hyundai’s new aero package has improved the car behavior. However, the car showed a dangerous tendency to nose-up during some jumps, which could have caused the thing to end very differently. 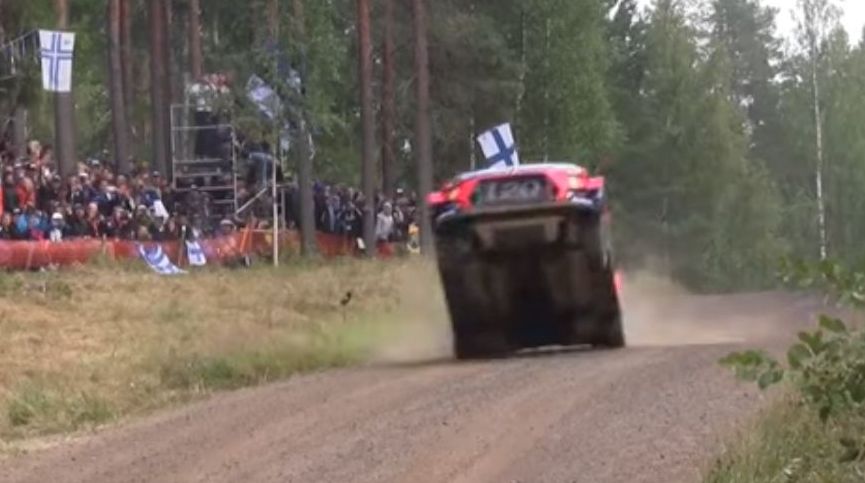 Such extreme behavior was not observed during the pre-event tests. Maybe the higher speed and tension reached during the rally stages is the reason behind this change of car behavior. 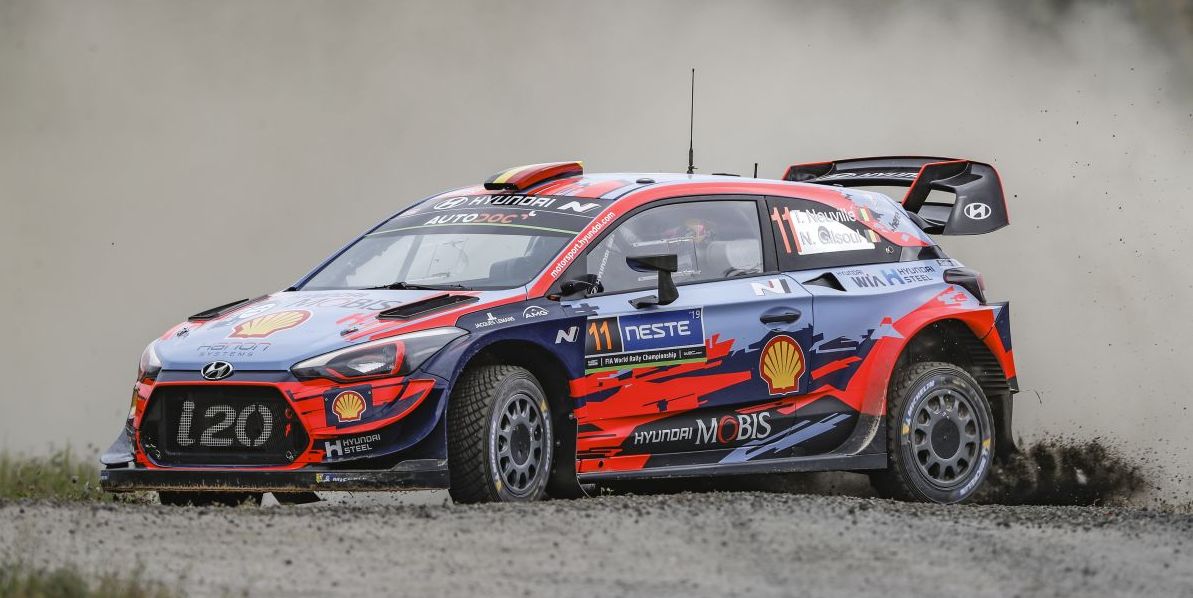 Neuville and Gilsoul took advantage of the benefits of the new aero package when they lost the upper dive planes on the right side on Saturday. Thanks to the double dive plane configuration in the new package, losing one of them has a small impact on the grip of the front axle, as the second keeps generating downforce.

Performance of M-Sport drivers was seriously impacted by their road position all over the weekend. In addition, losing the front lip (not the front splitter, as it is shown by the images below) made Suninen and Lehtinen lose additional time in SS4, 5 and 6, which they evaluated to be 0.3 seconds per kilometer. It is true that losing it reduced the downforce generation of the car, as we will try to explain in the next lines. But it also has a beneficial effect, as drag is reduced, due to frontal car area reduction with no lip. 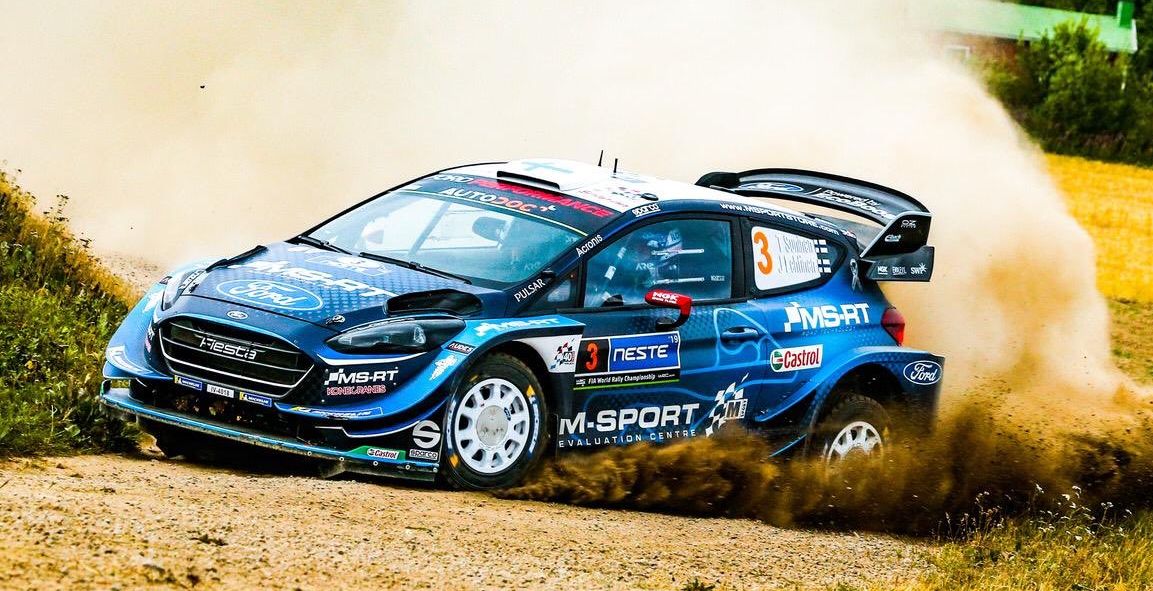 The front lip, made of rubber, is attached to the front splitter, acting as a barrier. It is designed to reduce the amount of air flowing under the car. Less air means that air flows faster, and by Bernoulli we know that high speed means lower pressure, allowing to generate higher downforce, due to the pressure difference between the upper and lower side of the car. So, losing the lip increases the amount of air under the car, which flows slower, and less downforce is generated, under the whole car (front, center and rear). 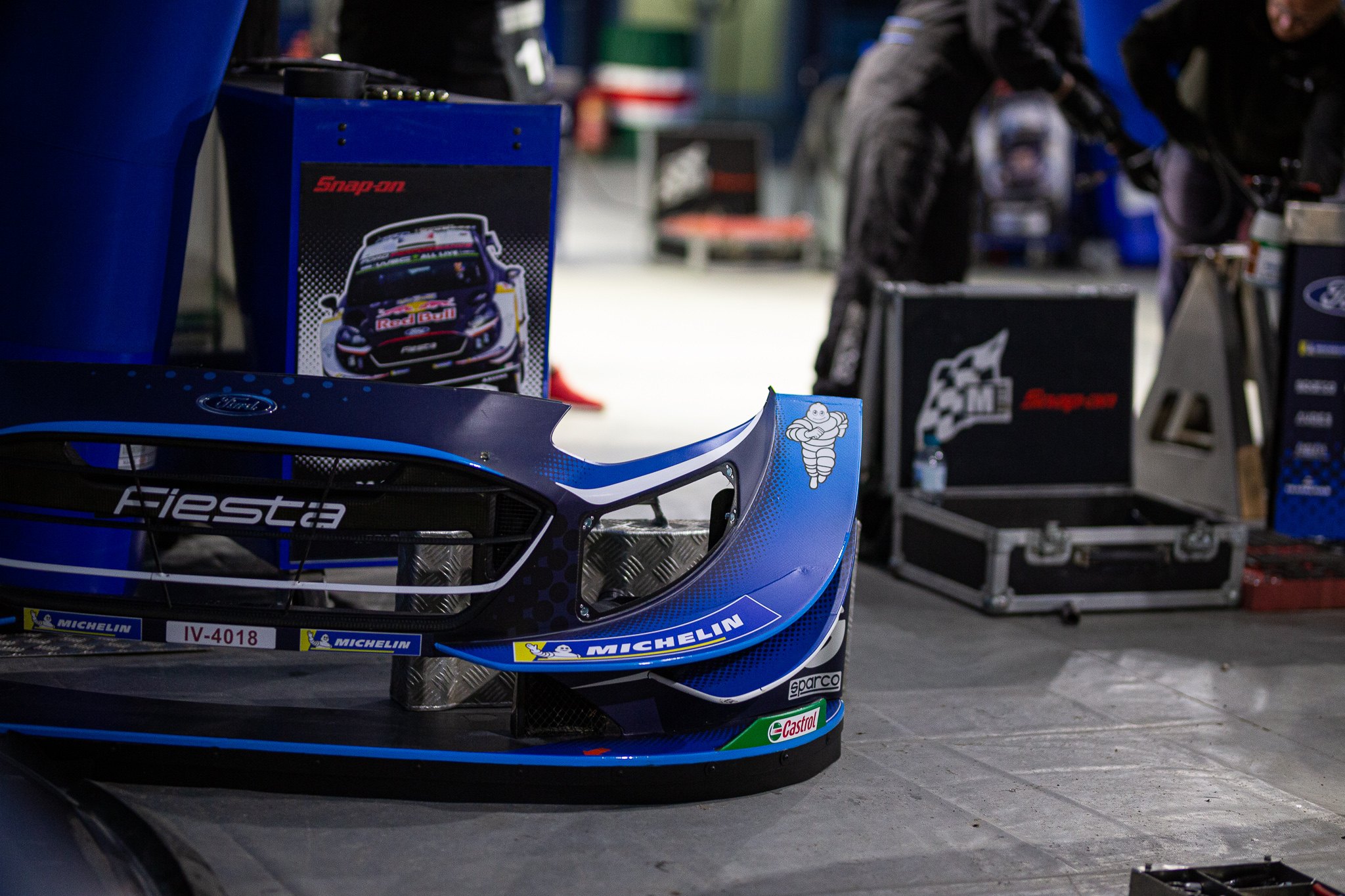 Also, the lower the airflow under the car, the faster it reaches the rear diffuser, making it more effective in its function of open exit to undercar flow. So, the second effect of losing the lip is that the rear diffuser is less effective, as it has to handle a higher amount of air, and less downforce is generated at the car rear.

In summary, aero played a key role in the fastest event of the year, and it will still be really important in the remaining events, especially in Germany and Catalunya Rally tarmac. But for sure teams are already working on next season configuration, as most of the jokers available for this year have been spent (we’ll review that in a future post) and there is little time now to test new modifications while fighting for the two Championships, which are still very open.

Some of the cars showed an excessive nose-up behavior while landing in the last crest of the Power Stage (Ruuhimäki), with the Citroën C3 WRC of Ogier and Ingrassia reaching the top angle, and losing the rear diffuser in the second pass as a minor consequence. The reason why those cars nose-up so heavily is not only related to aerodynamics, but to the way they faced the crest. 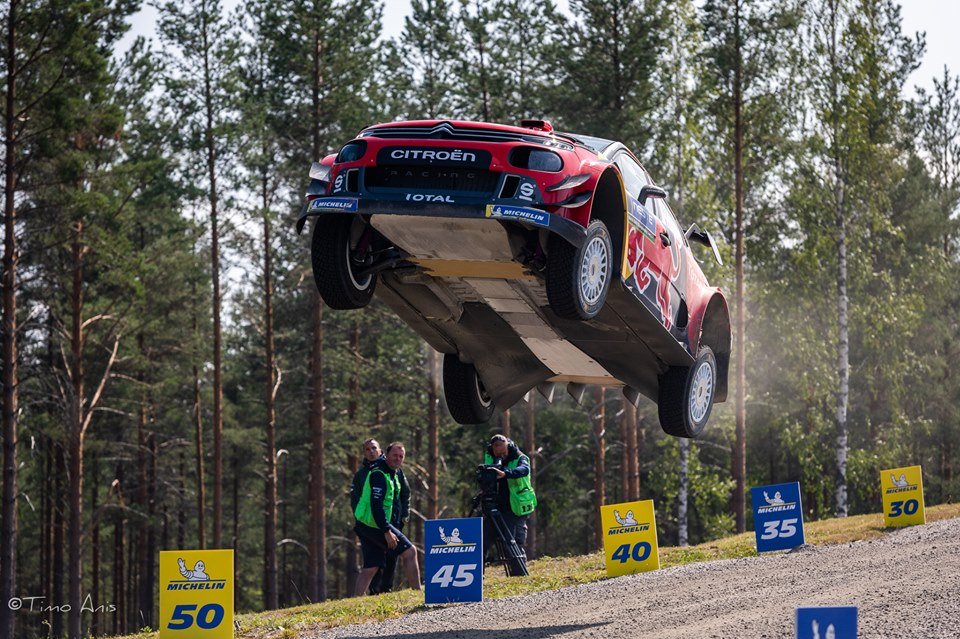 As Mads Østberg explained to us in an interview included in our post on Aerodynamics of a WRC car jump, it is normal to brake a little bit before the crest, in order to balance the car. If the top of the crest is reached at full acceleration, the car will face it with the nose up.

The control time at the end of the Ruuhimäki stage was located on top of the crest. Many drivers were pushing down to the limit to the very end of the stage to get the best time and some points. For this reason, they probably did not brake before the crest, and their cars took off nosing up. If you add a poor aero balance (such is the case of the C3), then the landing could not be balanced, and the cars reached very unbalanced position (as it happened to Ogier or Neuville).