As AUTOhebdo.fr, Autosport and Rallye Magazin published earlier this week, there seems to be some controversy with the dimensions and/or homologation of some of the current WRC rear wings, with respect to the regulations (which are dated from 2017). The reason behind such controversy would arise from the questions made by one of the WRC teams (Citroën) to the FIA in order to clarify regulations before they introduce their new rear wing design.

According to the articles referred above, after some discussions with all teams, the question needs to be reviewed, in order to clarify if everybody complies with regulations and, if necessary, to make the homologation clearer, as it seems current form allows different interpretations. 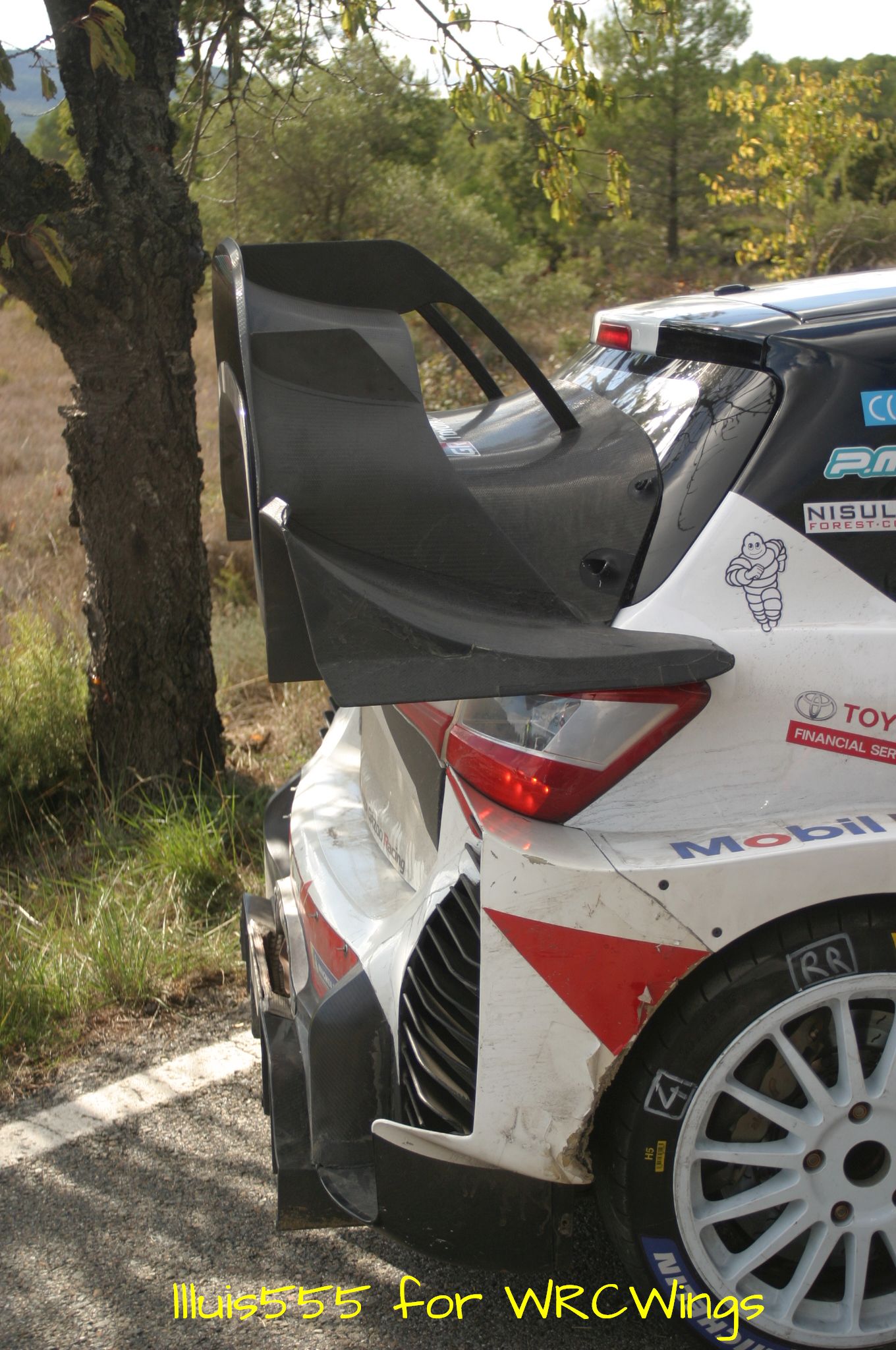 Unfortunately, dimensions and homologations of aero parts are detailed in Homologation extension form 400/01 WRC, an extension of Appendix J Article 255A Specific Regulations for WRC, which FIA has never made public. The only information available is the info distributed in early 2017, with the arrival of the new WRC car generation to the Championship.

It is known that the 2017 regulations defined some features of the rear spoiler/wing, such as

while no vertical fins were allowed in the central part of the upper wing, only on both sides (minimal separation 1m).

According to the information published yesterday, the current issue would be related, on one side, to an excess overhang of 30 mm in the case of the Toyota Yaris WRC, longer than the 50 mm allowed by regulation.

The picture below shows the four different rear wings of the four current WRC cars from last season, as there has not been any modification in any of them since then.

It is true that the Yaris rear wing may be the most protruded according to the picture above, although all depends on the angle from which you look at. But it is also true that these devices have been homologated by FIA in 2017 and been reviewed and accepted during scrutineering at each event.

While the first point should be easier to verify, as based on measurements, the second point allows a more open interpretation, as it is based on the shape of the wing, compared to the shape of the road car rear bumper. But, in all cases all cars have been verified in all previous events, so most probably the problem lies in the interpretation of the regulations, rather than in possible illegality of any of the current WRC cars.

All this said, what would be the potential benefits of the irregularities mentioned in the articles?

The extra overhang of the rear wing probably would mean that it would be longer than allowed. If so, the potential benefit would be to generate additional downforce, due to the higher surface of the wings.

The differences in the shape of the rear bumper of the road version, depend on each car. In all cases the rear bumper is flat, and so are the rear wings….except in the case of the Yaris WRC, with a more rounded rear wing. The potential benefit in this case is unclear: a higher downforce is generated when cornering, due to the round shape and inclined endplates, but less downforce is obtained when driving straight, due to the lower surface of the wings. At the same time, due to the reduction of frontal area, drag would also be reduced.

But again, all this has to be re-measured and verified before drafting any conclusion. We will have to wait and see for an official explanation by FIA. Lately, if no explanation is given and any modification is introduced before Rally Turkey, a risky door will be opened to question previous results and titles.

One thought on “Controversy on WRC rear wing dimensions and shape”