Season 2019 is done, It is then the moment to take a look at all the aero modifications teams have implemented throughout the year, the balance of testing days spent by each team as well as the jokers spent. Teams still have time, until the end of the year, to use the remaining test days and jokers, so it is interesting to know how many of each they still can use, to better prepare the next season. 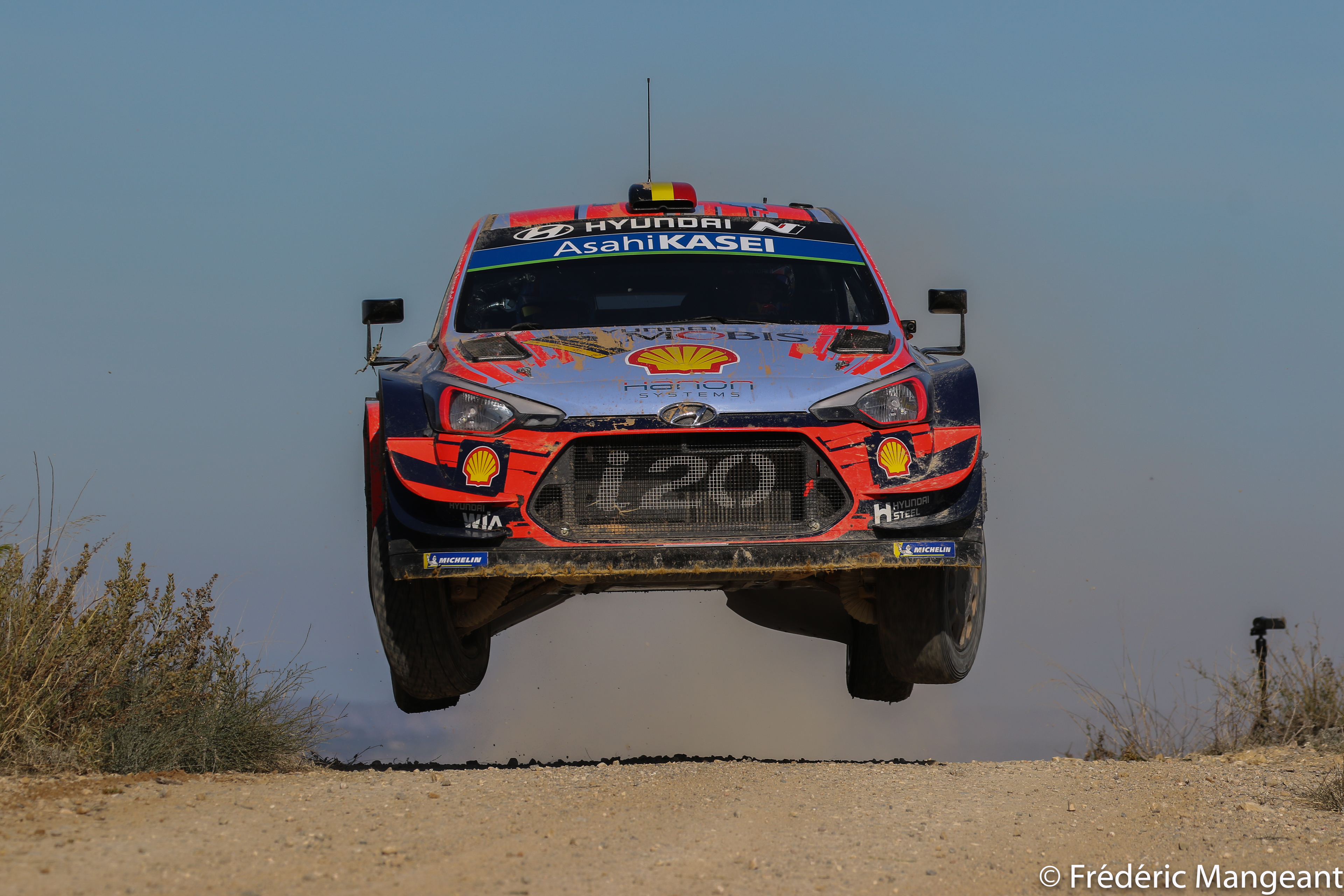 Hyundai has completed his most successful year with only one major aero modification. It consisted in the redesign of the front package, which was introduced in August in Rally Finland, after being homologated in July 1st. The changes included the addition of a second dive plane, under the existing one, with a design similar to that f the Toyota Yaris WRC. Also, a small fence was added on top of the front splitter, at both sides of the car, following Toyota and Ford’s example, as both Manufacturers included such a solution since early 2017. The upper surface of the front fenders was also redesigned, allowing airflow to better reach the rear wing endplates, thus generating higher downforce. 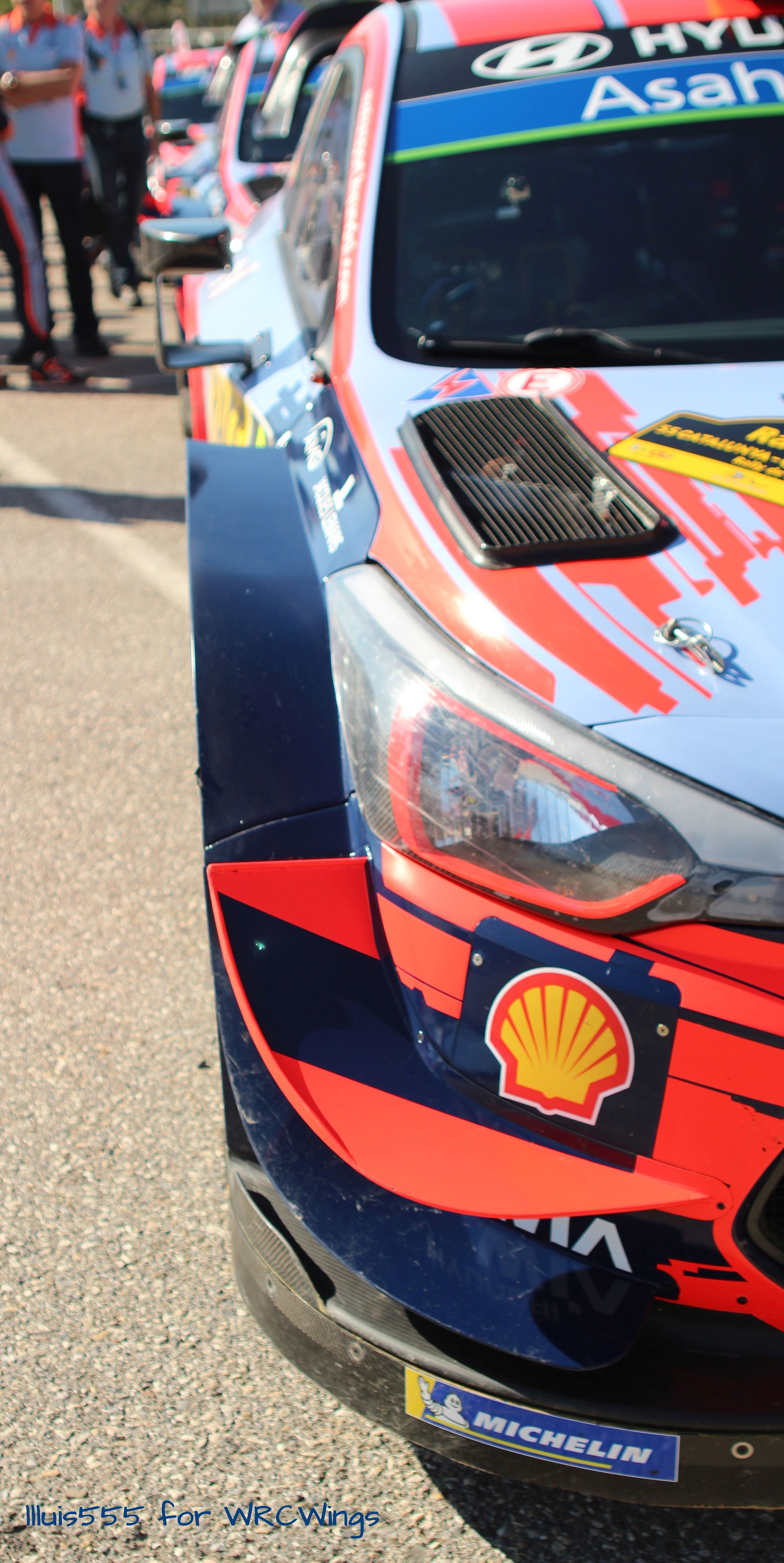 Also, vents from front fenders were modified, to improve air removal capacity. This reduces lift in the front axle due to lower air accumulation there, which means better grip and lower understeer. 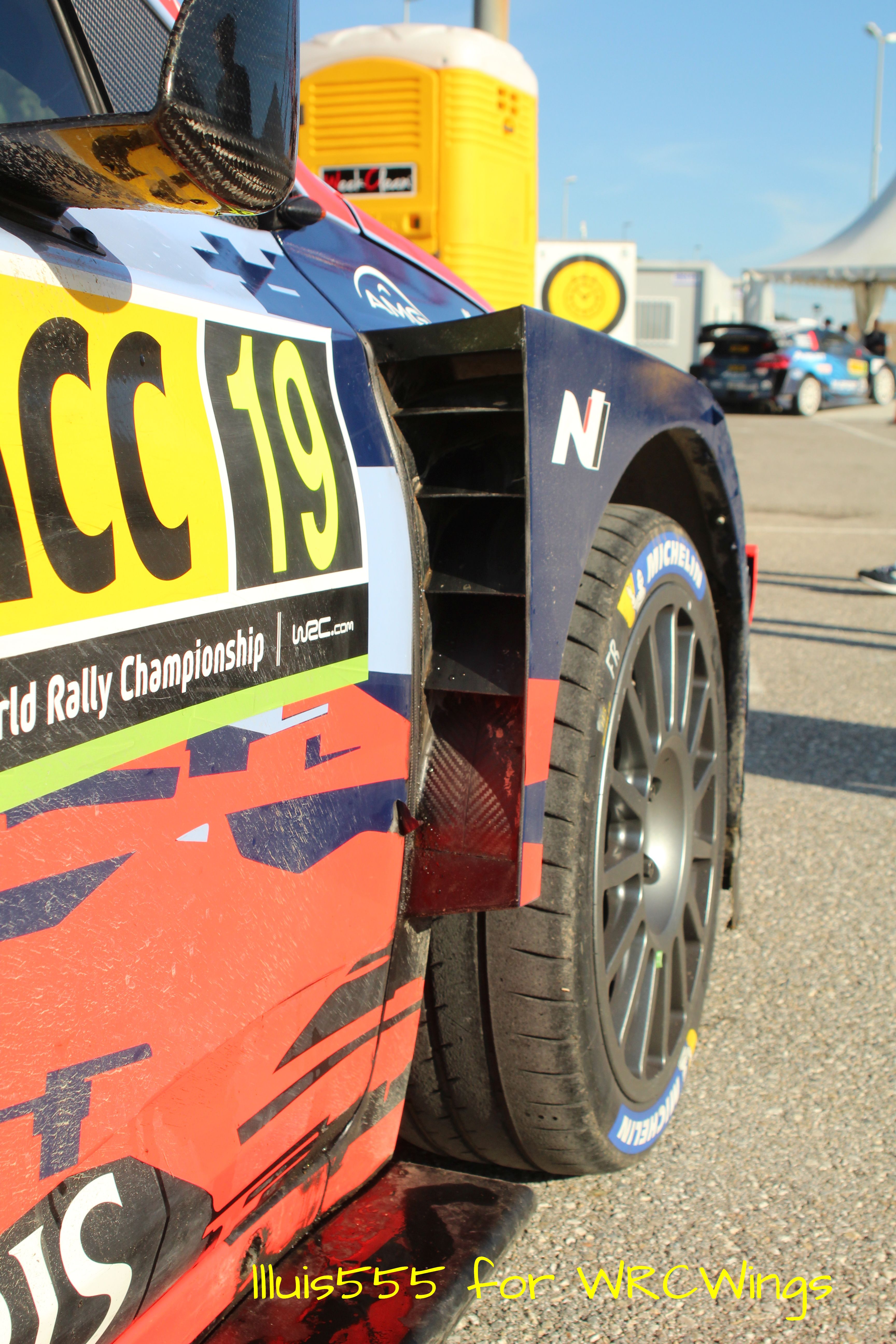 More info on these modifications in our corresponding review post.

Toyota has implemented two modifications to its aero package during 2019. The first one arrived in Rally Deutschland, under the form of new air intake for rear brake cooling. Located at the upper flat plate of the rear doors, it has the shape of a NACA duct, following the same design Hyundai introduced in 2017. Such modification was tested since Rally Mexico pre-event tests, and it was homologated on April 1st. 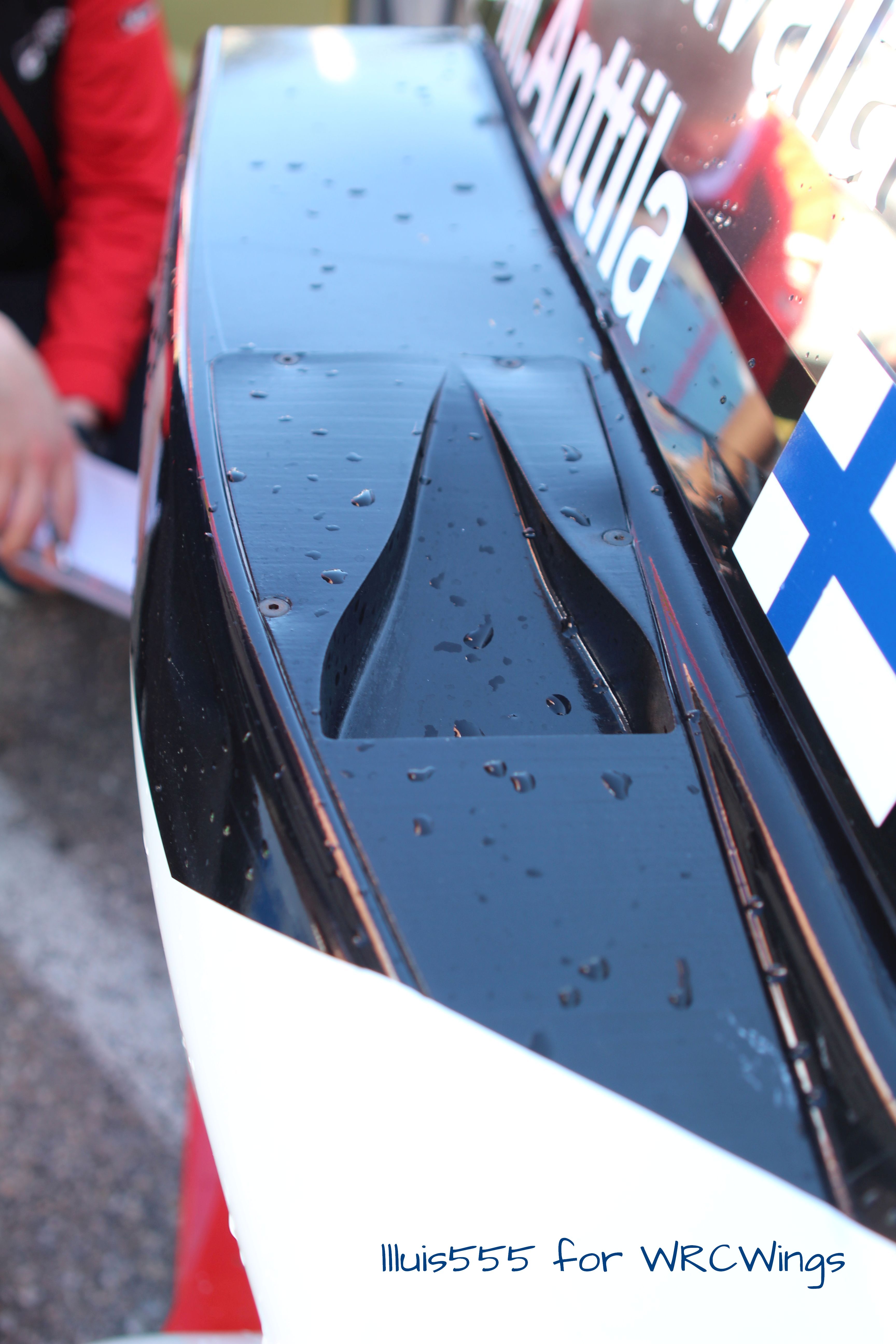 The second, and most significant, aero modification of the Japanese team arrived in Rally Turkey when a new rear wing was introduced. The modification was the result of the controversy generated before Rally Finland when another team (supposedly Citroën) detected anomalies in the homologated wing dimensions of some of their competitors. Teams were given until Rally Turkey to correct such anomalies, but only Toyota introduced changes into their rear wing, confirming that the other teams were free from these anomalies. 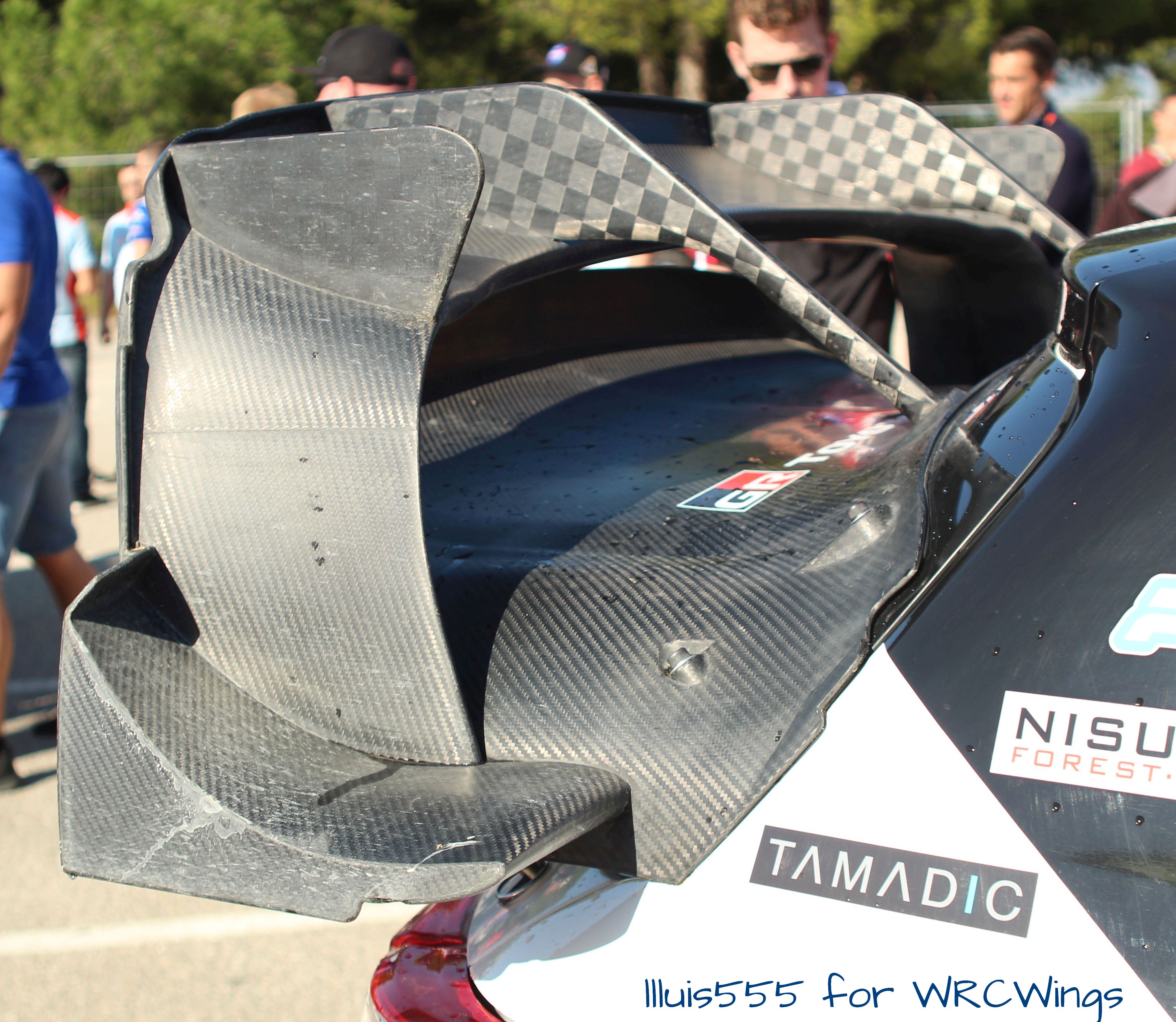 The Yaris new wing used since Turkey was based on the original design, but with several significant modifications:

The impact of these modifications in the car performance was significative: the wing was able to generate higher downforce in the straights, thanks to a higher area of the upper plate, but lower downforce when cornering, due to the vertical endplates in both the main wing and the small winglets, as well as by the reduction of side area of these appendices.

Drag was possibly impacted by these modifications: the flatter plate possibly generates higher drag, due to the increase in frontal area, while the reduction of the vertical rear portion of the winglets can contribute to compensate such increase, due to the area reduction.

The new wing showed also a reduction in its total height: while its baseline is located at the height of the base of the rear windscreen, the original descended a few centimeters more, right over the rear lights. Such size reduction means less drag (due to the reduction in frontal area) but a significant reduction in downforce generation, due to the smaller wing total surface.

More info on this modification in our corresponding review post.

A third, small modification was used by Toyota only in those events where mud was present (like in Chile). To prevent mud accumulation in the rear fenders, they reduced the number of louvres in the rear vent to just three. Such modification had a small impact on the car wake, in the sense of a more turbulent (draggy) wake, for what it was only used occasionally. 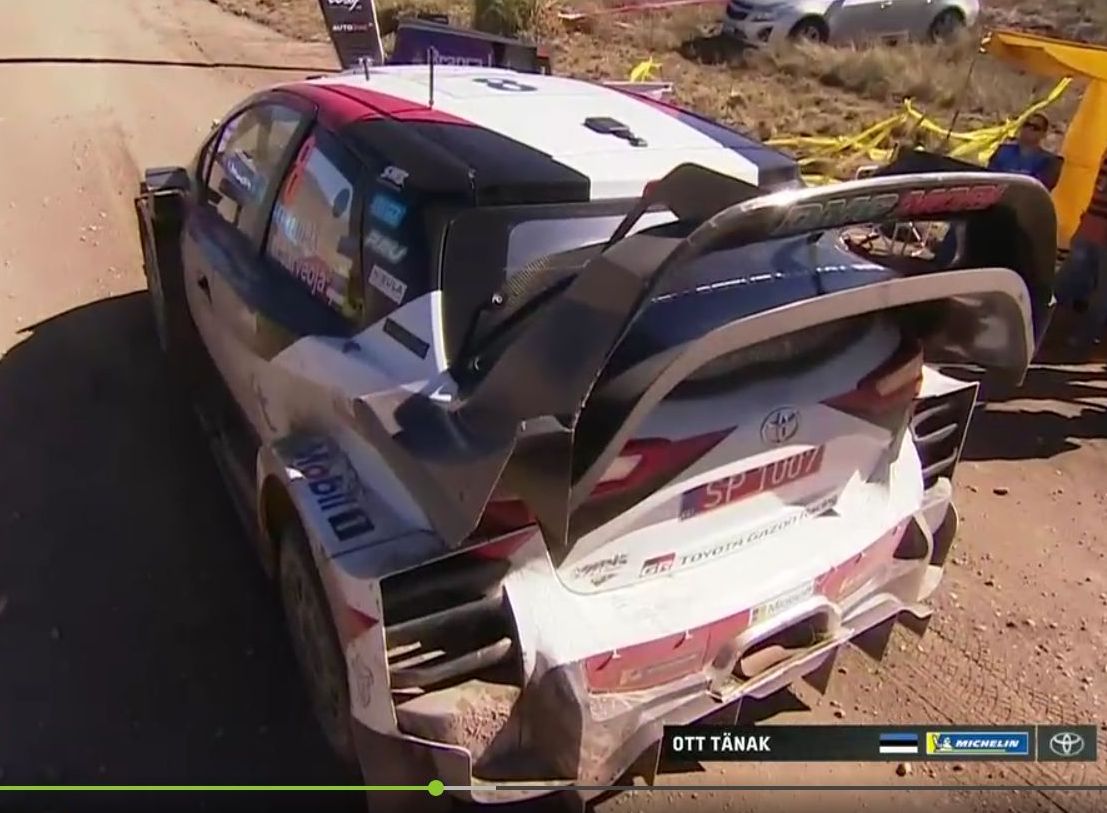 The modification of the fender’s louvres did not require any joker, as it was considered only a Variant Option (VO).

M-Sport, with the support of Ford Performance, was able to introduce a couple of aero modifications in 2019 in the Fiesta WRC. The first one arrived in the very first round of the year, in Monte Carlo. It consisted in a modification of the rear fenders the team had introduced in Finland 2018. The lower part of the rear vent was modified, to allow some space for the wheel wake to be released, while increasing the reliability of the rear fenders, as the risk for collision was reduced. It was homologated as joker 443/07 on December 1st., 2018. 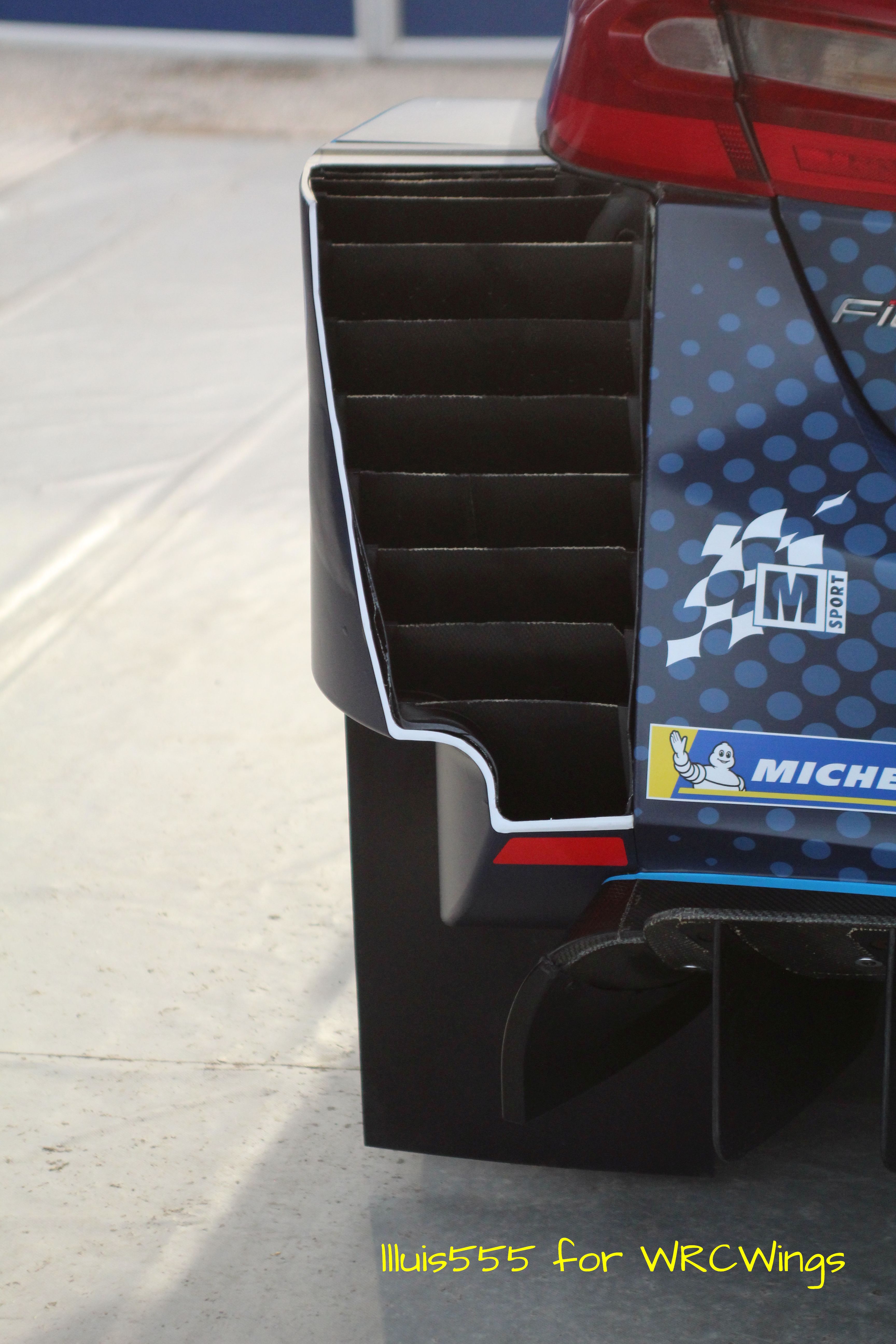 The second modification was introduced in Rally Mexico. It consisted in a small modification on both sides of the front bumper, to allow more air to flow under the lower dive plane, to the car sides. It was homologated as joker 449/08, on March 1st. 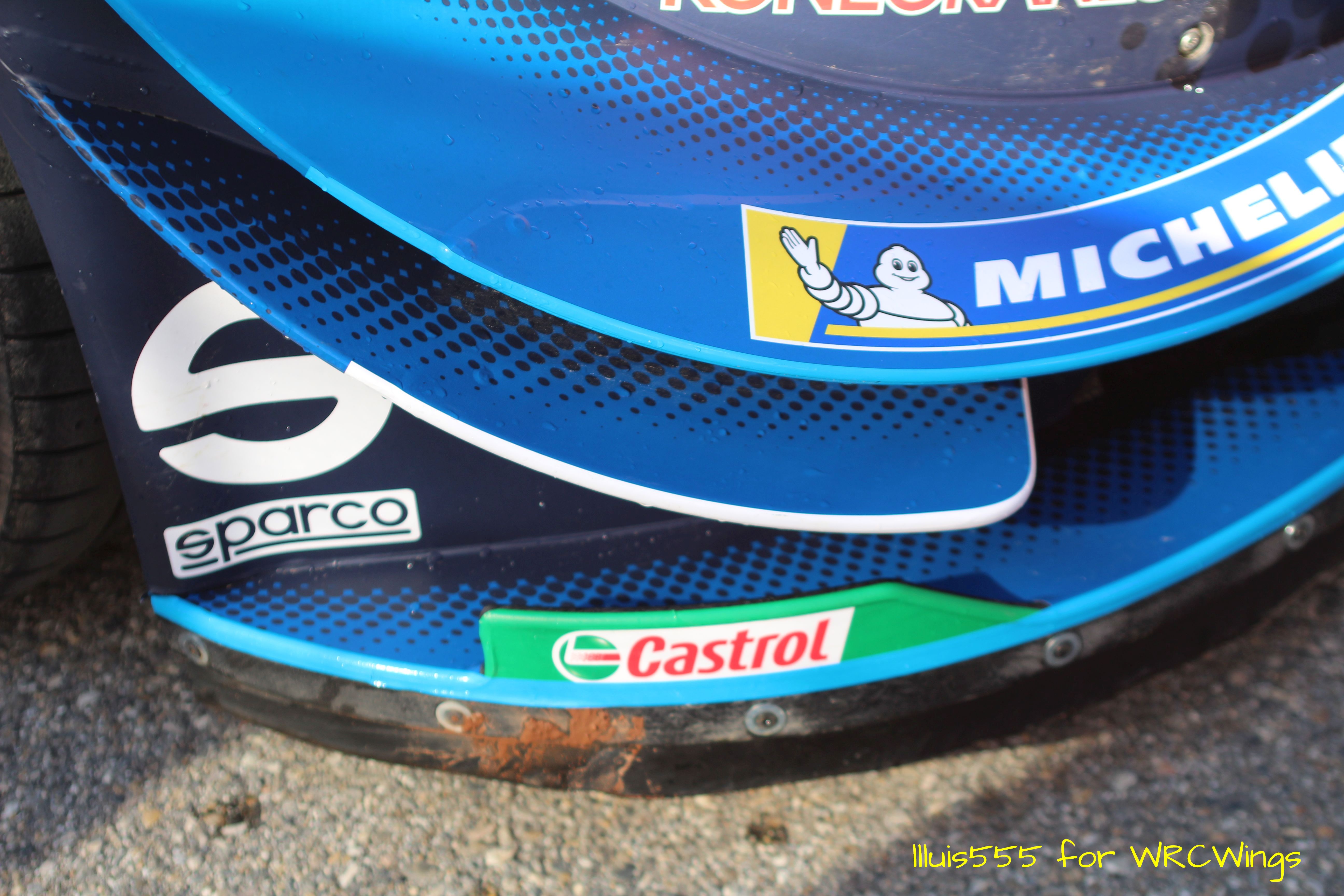 More info on this modification in our correspond review post.

Citroën is the only team that has no introduced any aero modification in 2019, the same as in 2017 and 2018. They have continued with the development program, by testing different aero solutions. The most radical was seen during Rally Catalunya pre-event tests when they evaluated an almost completely new aero package, we already analyzed in this previous post. 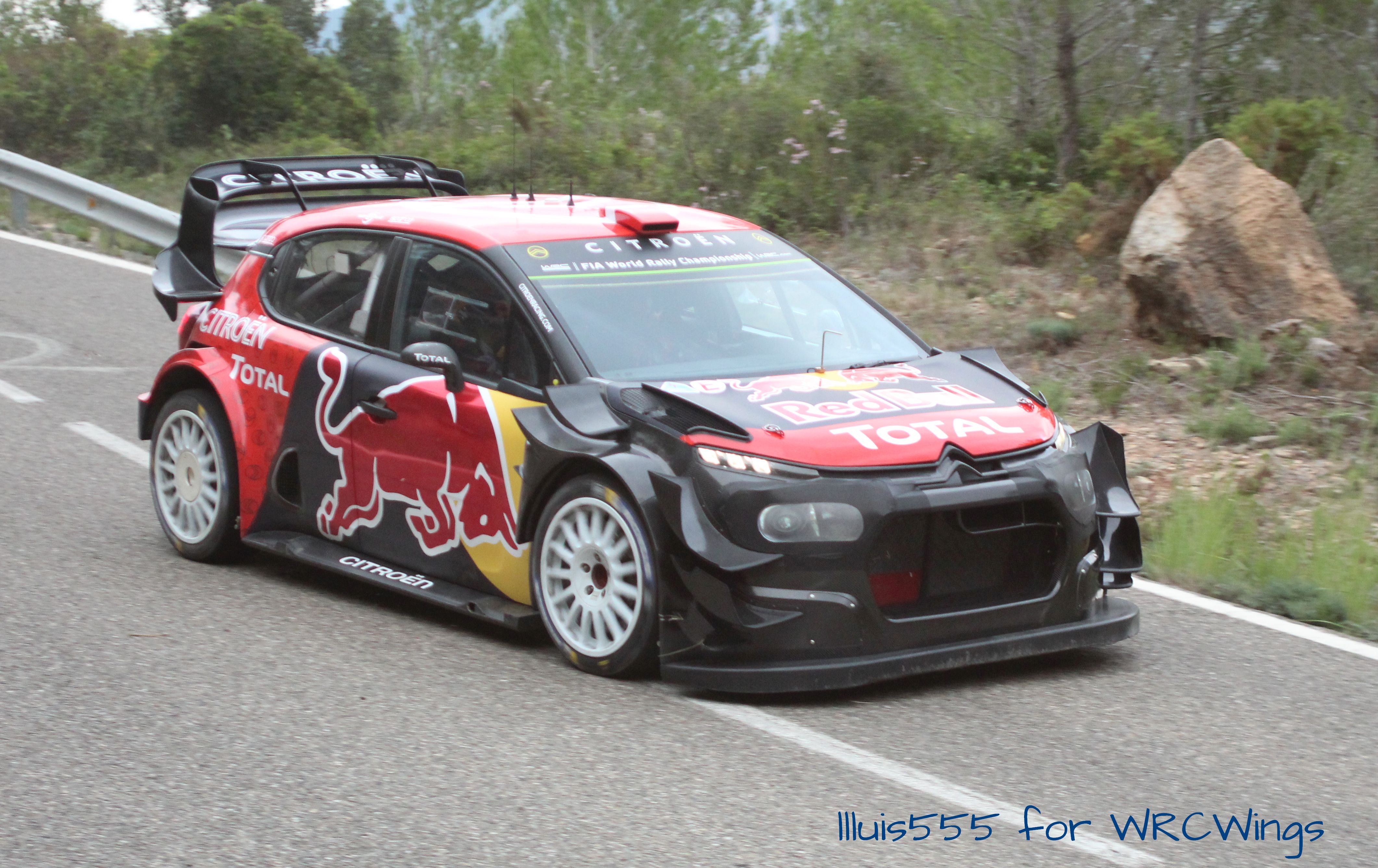 The new package included a new front bumper, with up to three dive planes on each side, all of them with endplates to improve the plane’s efficiency. Front fenders were also modified, with the addition of a winglet and the modification of the upper profile. Finally, a completely new rear wing was evaluated, with a central body very similar to the new wing of the Toyota Yaris WRC, and a new design for the side winglets. Unfortunately, due to lack of jokers (and probably also due to lack of enough testing), the new package was not homologated, and it will not be used until next season. The big question now is which parts of the new package (or all of them) will be included in the final homologated aero package.

In summary, the year 2019 brought two important modifications for the two leading teams, the Hyundai i20 Coupé WRC new front bumper and Toyota Yaris WRC new rear wing (although this one as a consequence of inconsistency with homologation procedure), and some other small modifications for both teams and M-Sport. For Citroën it was a year of transition, in terms of aero, to develop a new aero package very probably to be introduced since the first round of the next season.

We will review the impact of these modifications on the stage times in a future post.

For 2019, all teams were allowed to use 42 testing days for nominated drivers (nominated in the present and/or previous season) as well as 7 days for guest drivers. The table below shows the testing days spent by each team in the year to the present date, according to our files. 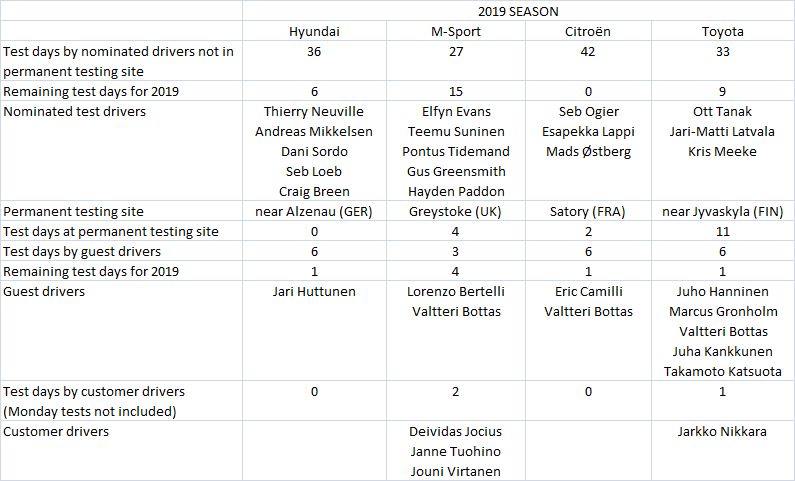 The main point from the table is that Citroën would have already spent all days available for 2019 for nominated drivers. If so, they could only use one additional day for guest drivers (such as Camilli). All other teams already have between 6 and 15 days available for season 2020 pre-event testing, to be carried out in November and December.

For 2019, all teams were allowed to use three chassis jokers and three engine jokers. The table below shows the number of jokers spent by each team during the period from January to August 2019, according to the last list published by FIA, dated 02.08.2019. Only one joker has been added to this list, corresponding to the new rear wing introduced by Toyota in Rally Turkey, which supposedly should have been homologated on September 1st (to be confirmed). 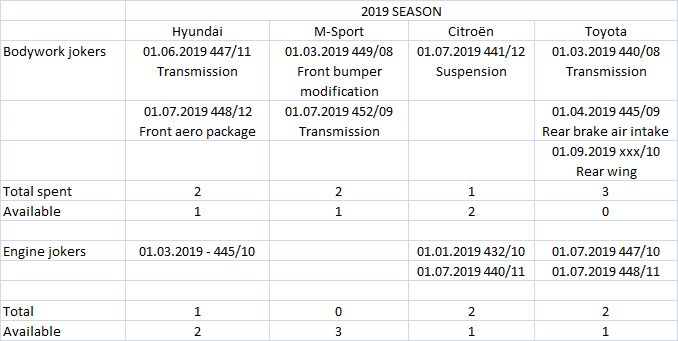 Some teams already spent some of their last year jokers available in the last months of 2018 to introduce modifications for the 2019 season. This is the case of M-Sport when they modified the rear vent of the rear fenders, a modification homologated on December 1st, 2018. This year it will probably happen again, as all teams, except Toyota, have bodywork jokers available (unless they have spent them in the period between September and November).

Next week we will surely see the start of the new season pre-event tests. It will be time to know the new solutions the teams have designed for 2020 and they are working on for a future homologation. There is no time for holidays, it’s the start of a new season!