Our recent review of the 2019 WRC aero modifications showed that the main changes were implemented by Hyundai and Toyota, while M-Sport only introduced two small changes, and the aero package of the Citroën remained unchanged, for the third year in a row. We have evaluated these main modifications using the stage results before and after those modifications were introduced, and here’s what we found. 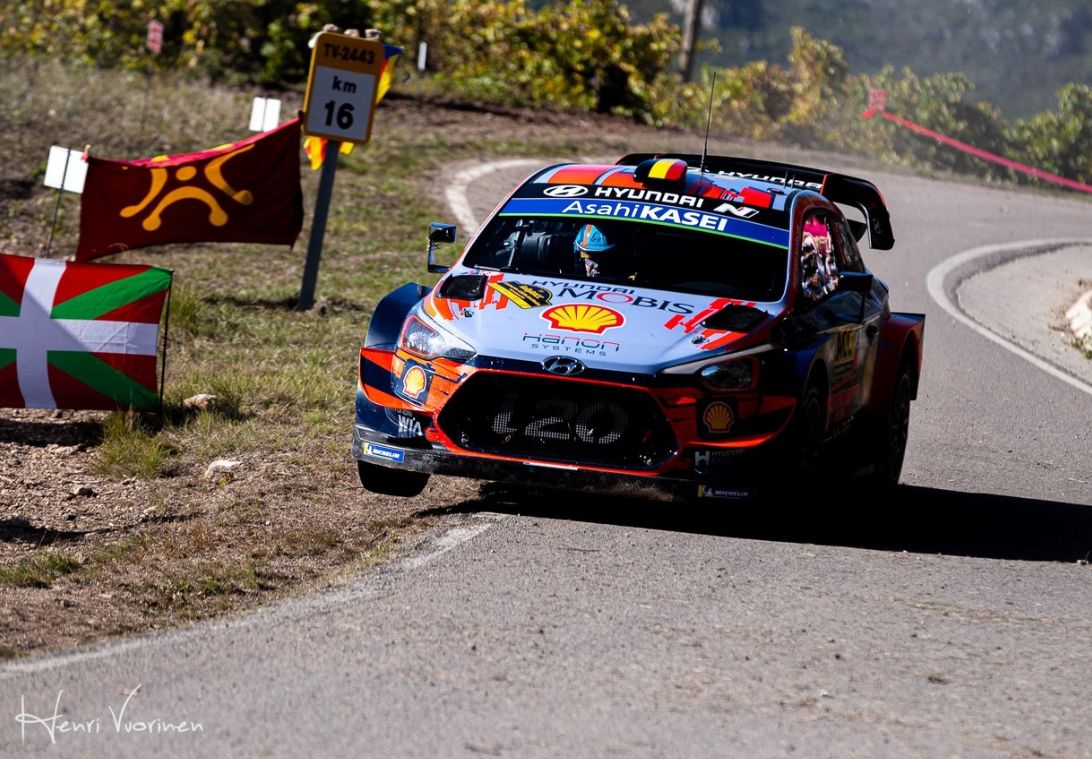 In order to improve the i20 Coupé WRC performance, to ensure their chances for the titles’ chase they were involved in, Hyundai introduced a modified front aero package in Rally Finland last August. To analyze if these changes were effective or not, we will compare the results they have obtained in the stages run since Finland, with the results obtained last year in the same events, that is Finland, Germany, Turkey, Wales and Catalunya. 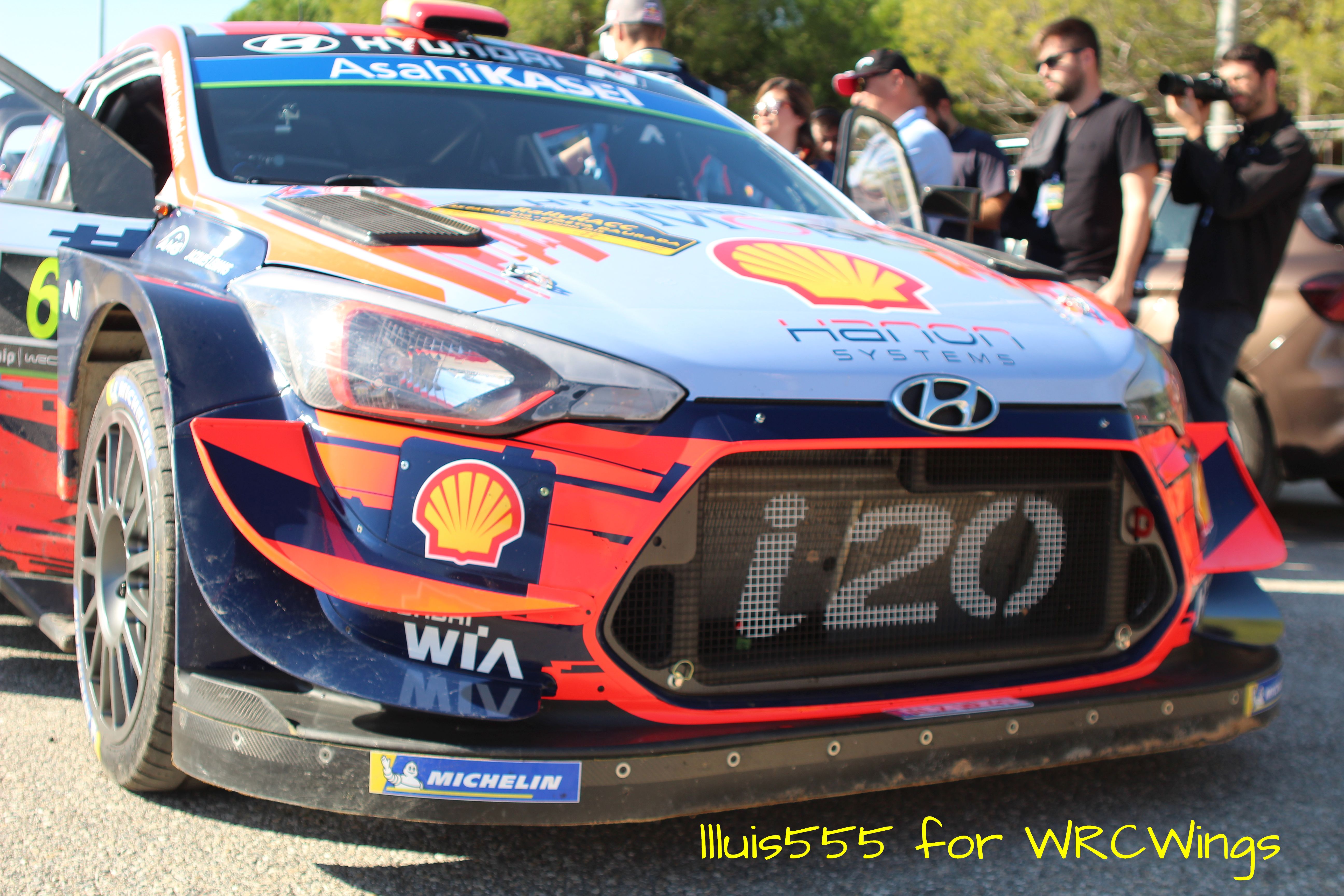 The total stage results, included in the table below, show a significant improvement in the results obtained in 2019 (with the new front package) versus 2018: stage wins number increased from 20 to 34 in the same period.

Table 1. Stage wins per team, in the period from Rally Finland to Rally Catalunya 2018 and 2019 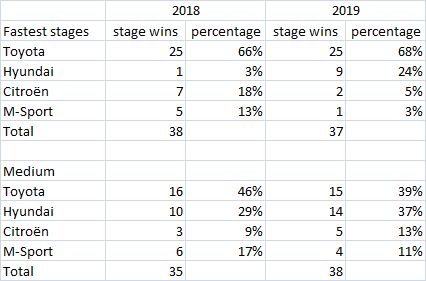 The most significative improvement has been obtained in the fastest stages, where traditionally Hyundai had obtained the worst results (as shown in our previous analysis), In this type of stages, Hyundai has obtained up to 9 stage wins, while in the same period in 2018 they had obtained just one, They have improved their stage win percentage from a mere 3% up to an interesting 24%. Also, there is some improvements in the medium speed stages, as the percentage of stages wins increased from 29% to 37%.

These results, especially those referred to the fastest stages, confirm that the modification of the front aero package contributed to improving the car performance. Most probably, the modifications resulted in an increase of grip on the front axle that effectively reduced the understeer behavior of the car. 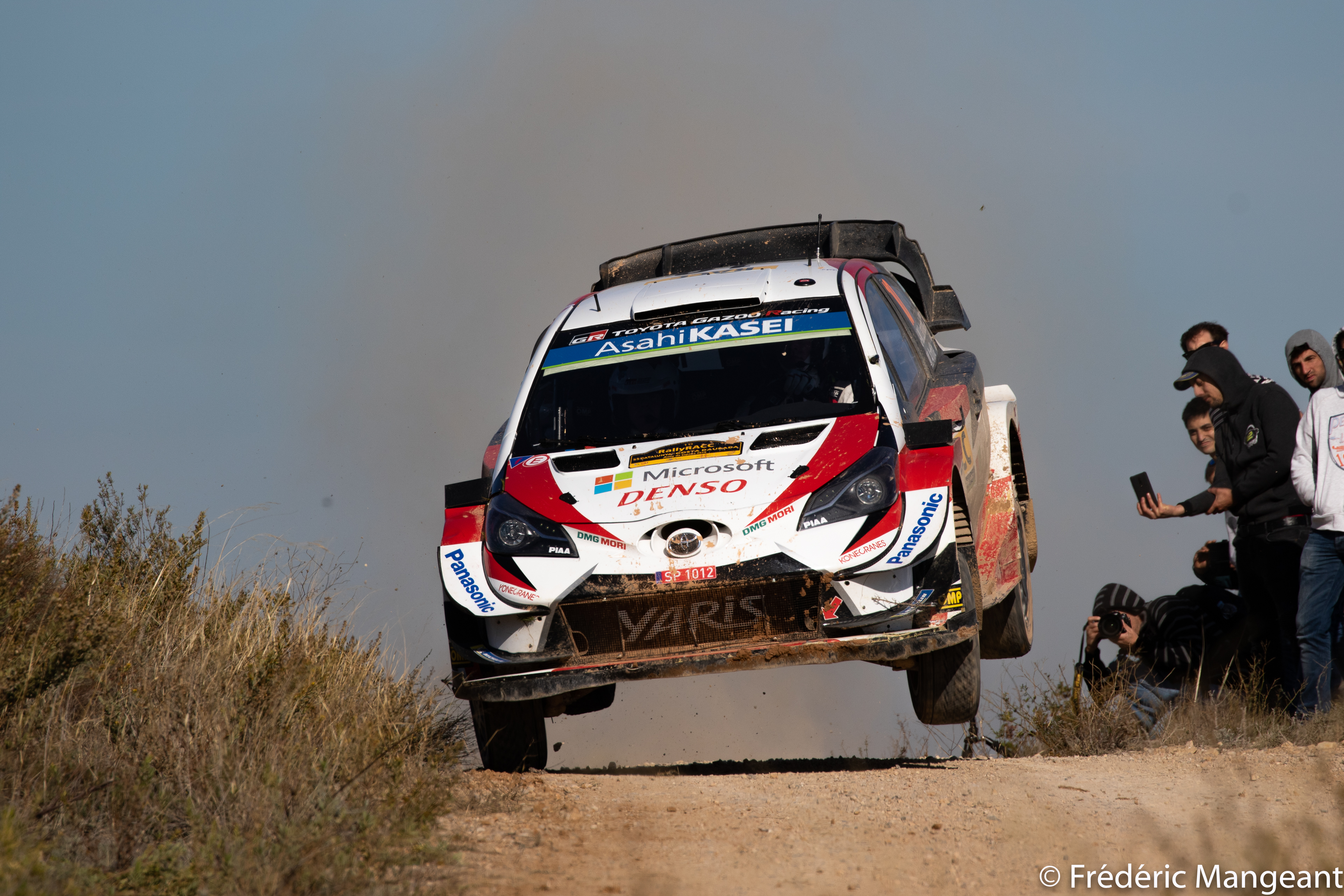 Toyota introduced a redesigned rear wing in Rally Turkey. The goal in their case was not related to performance but to follow the requirement of FIA after the controversy generated before Rally Finland we already reviewed in a previous post. What it is interesting to analyze in this case is if the new design of the rear wing Toyota engineers had to prepare in less than 2 months negatively impacted the car performance, or it proved to be strong enough not to harm the car performance. 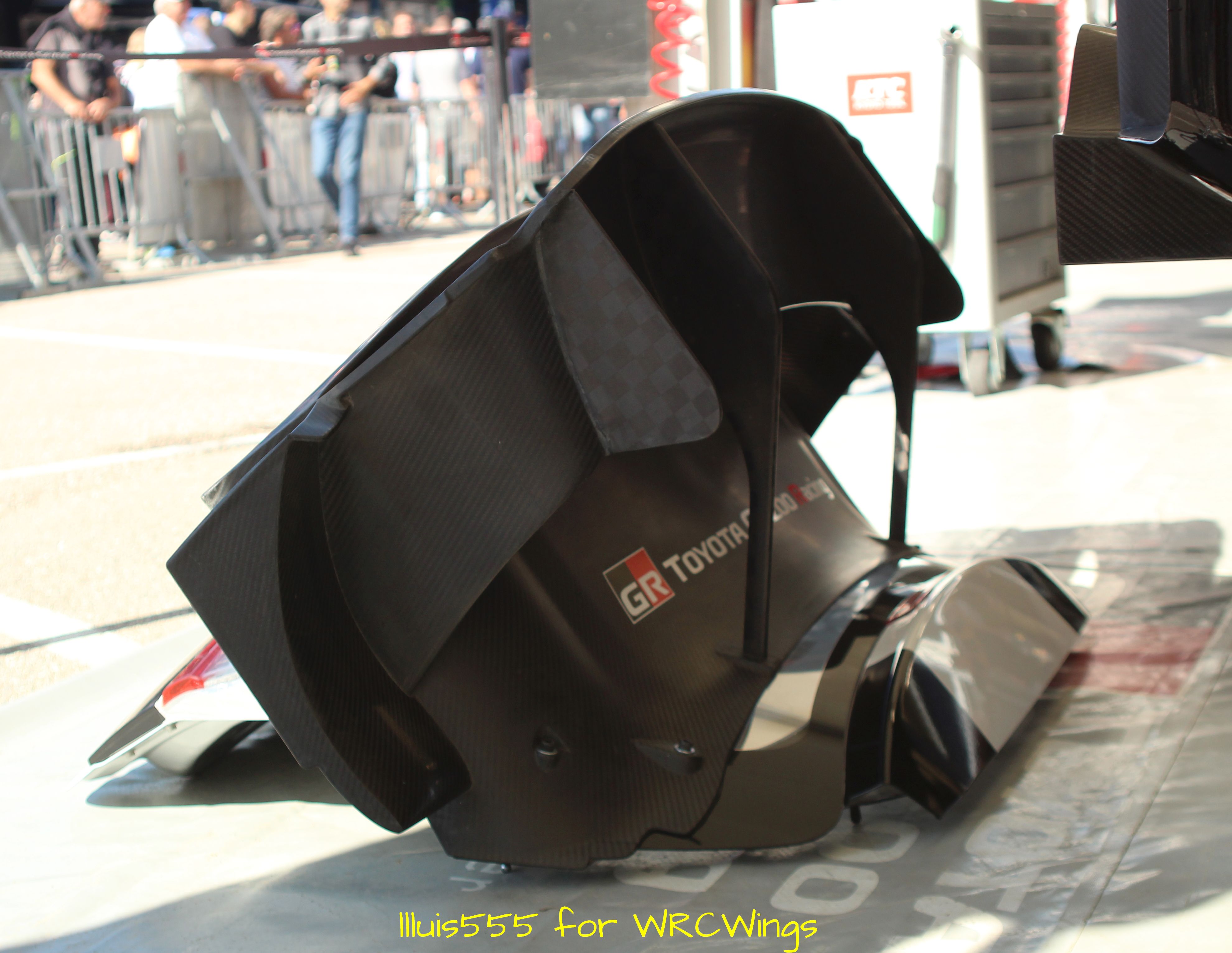 For this analysis, we have only available the results from the last three rounds of the season (Turkey, Wales and Catalunya), which we will compare with those of the precedent season, in the same events.

The table below shows the total stage wins in these three events in both years. Toyota shows a small reduction in stage wins: from 24 in 2018 to 20 in 2019. It is not a big difference, and before drawing any conclusion, we need to know where it comes from.

Table 3. Stage wins per team, in the period from Rally Turkey to Rally Catalunya 2018 and 2019

The results from the fastest and medium stages are included in the table below. The amount of stage wins obtained by Toyota in the fastest stages remained unchanged, as they won in 6 out of 12 stages in both years, in the period considered. The difference appears in the medium speed stages, as Toyota won in 10 (out of 23) in 2018, and only in 6 in 2019. 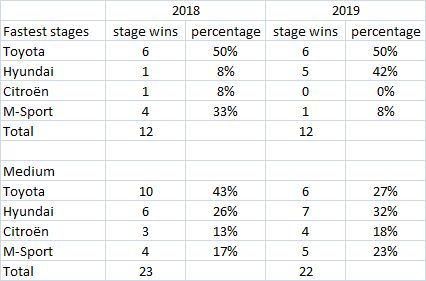 The fact that the difference in performance is detected only in the medium speed stages means that the car aero performance was possibly not affected by the wing modification. If that was the case, differences should also have been observed in those stages where aero plays a bigger role, the fastest stages. And it was not the case.

However, two factors may have a certain impact on these results: the coincidence with the modification done by Hyundai (which we have already determined that had a positive impact on the car performance) and the relatively low amount of stage data available (only from three stages). For what, a more extended analysis would be required to draw definitive conclusions. 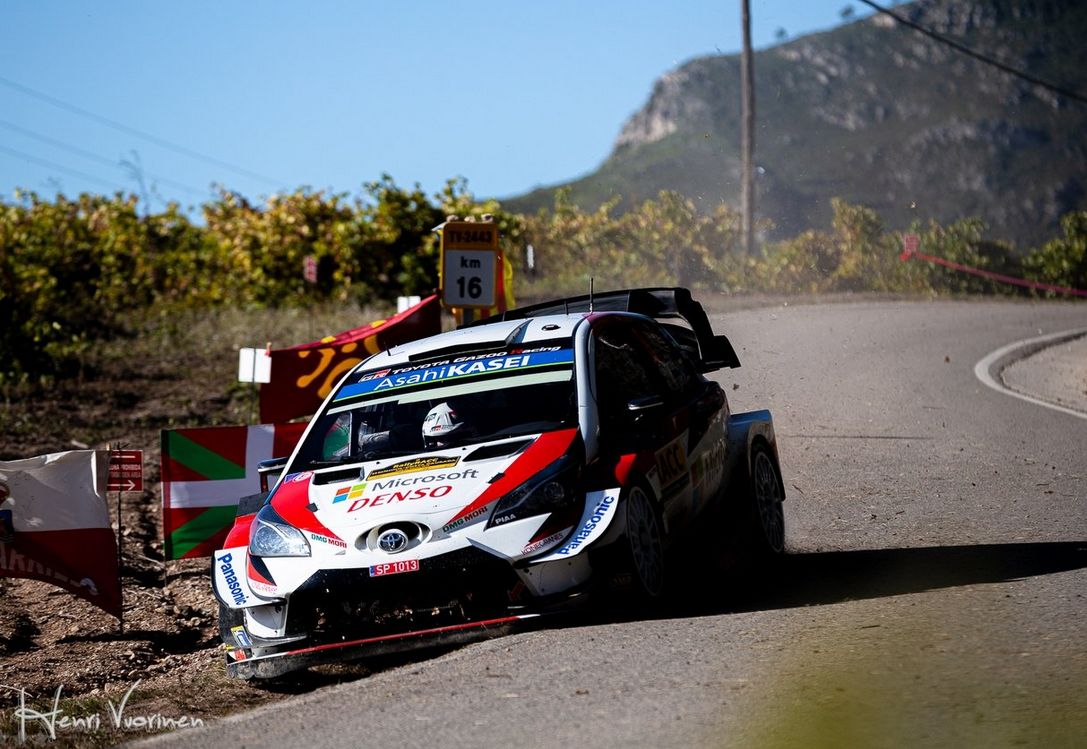 In summary, with the data currently available, the results from the analysis of the Toyota performance before and after the modification of the rear wing seem to indicate that Toyota engineers did a very good job, as the rear wing modification did not harm the stage results.

The conclusion is that the stage results available seem to confirm that both Hyundai and Toyota engineers did a very good job, as the car performance improved, in the case of the Hyundai i20 Coupé WRC, or it was not negatively impacted by the FIA-required modification, in the case of the Toyota Yaris WRC. Further analysis will be done after some 2020 rounds, to confirm both trends but, in any case, it’s fair to congratulate both teams’ aero engineers for their brilliant job.