During the 2020 edition of Rally Monte Carlo, different issues related to aerodynamics have taken place, which are worth to review. At least, some of them, in detail.

The most important was the accident suffered by the duo Tänak/Järveoja at a very high speed on Friday morning. Even the duo left the car undamaged, a live debate has been launched since then about the speed of the 2017 WRC cars and the role aerodynamics play in their performance. It is an interesting discussion, where downforce can be taken both as safety safeguarding and, at the same time, the origin of dramatic crashes like the one we saw. Due to the importance of the subject, the short time available since the accident happened and the dramatic consequences it might have had, we will review it in more detail in a future post.

The start of the Rally, with two stages run on Thursday evening, showed how sensitive engine cooling can be. All three Fiesta WRC cars suffered cooling problems, presumably by the blockage of air in the frontal lower air intake, due to the accumulation of leaves during the stages. On-board messages of water temperature around 125C alerted drivers, teams and spectators that something was not performing well. 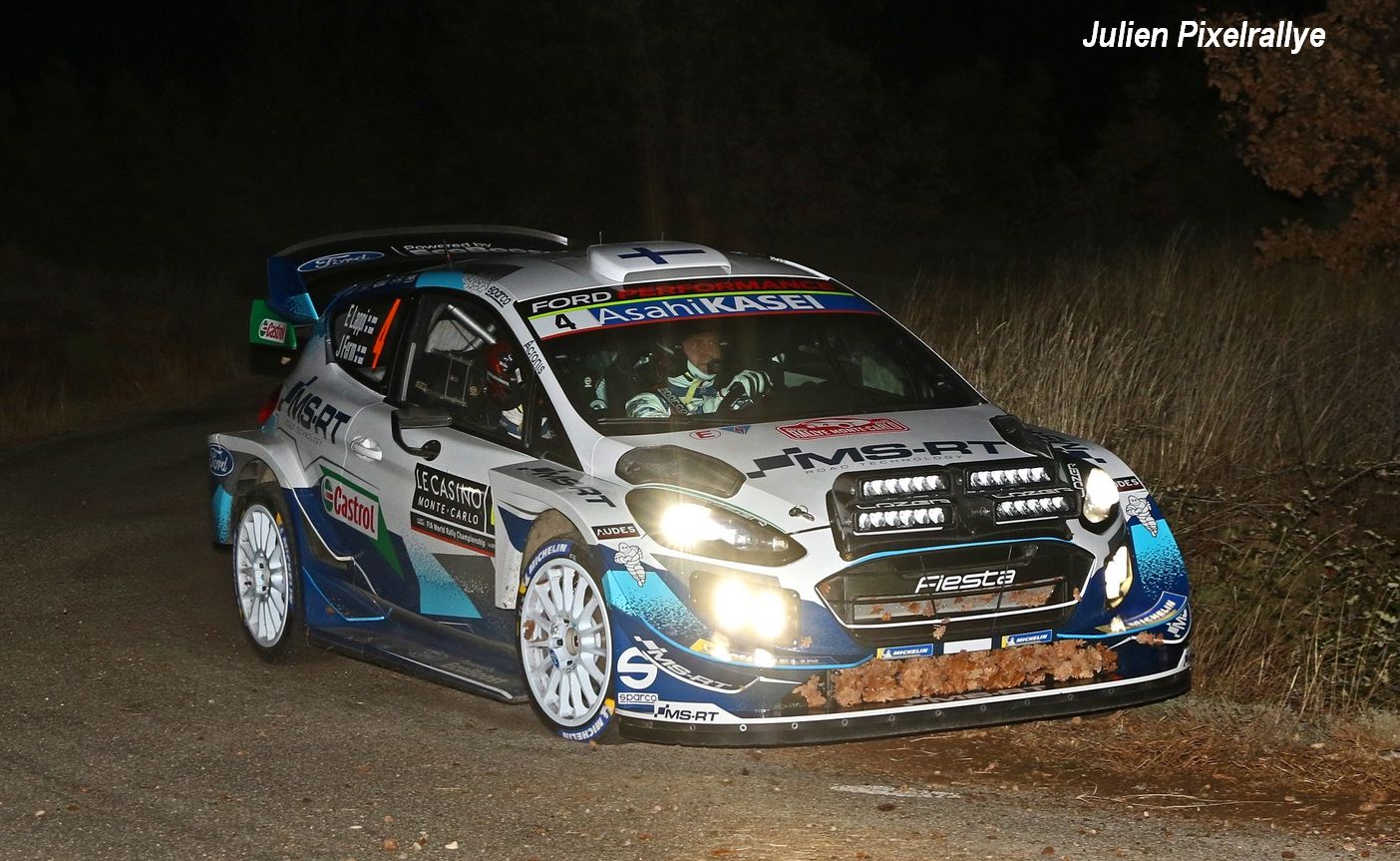 Most probably the leaves significantly blocked the lower air inlet, reducing the cooling airflow to lower radiator below minimal requirements, and engine cooling quickly increased to values around 125C, which may result in engine damage. This caused drivers to reduce their pace and losing some precious time. 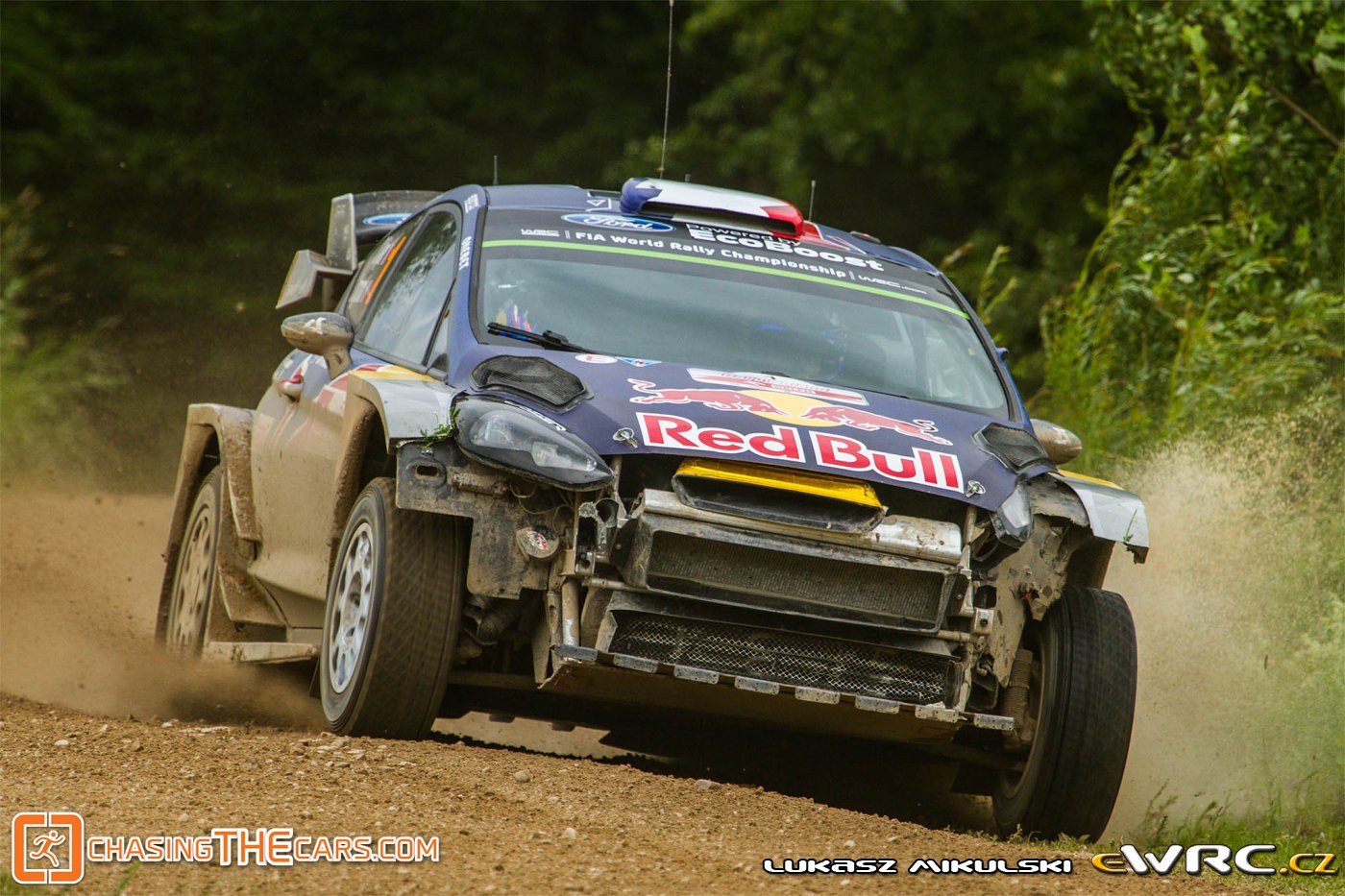 The disposition of radiators in the front of the Fiesta WRC is determined by the two air intakes. The radiator seems to be fed by lower intake, while intercooler would be behind the upper intake. So, the blockage caused by leaves would have impacted on engine cooling rather than on the turbo.

What is surprising is that this issue is not new. We already saw this happening in last year’s edition, as shown in the picture below. Although it is true that the amount of leaves accumulated there seems to be higher in this year’s pictures. But it is surprising the team had not detected it before, so they could have taken measures to prevent the cooling issues.

On Thursday night, the team improvised a solution that solved the problem for the rest of the event. They installed a frontal inclined grill, ahead of the lower intake and supported over the front splitter, which prevented leaves from accumulating in that area. And no more cooling issues were reported. 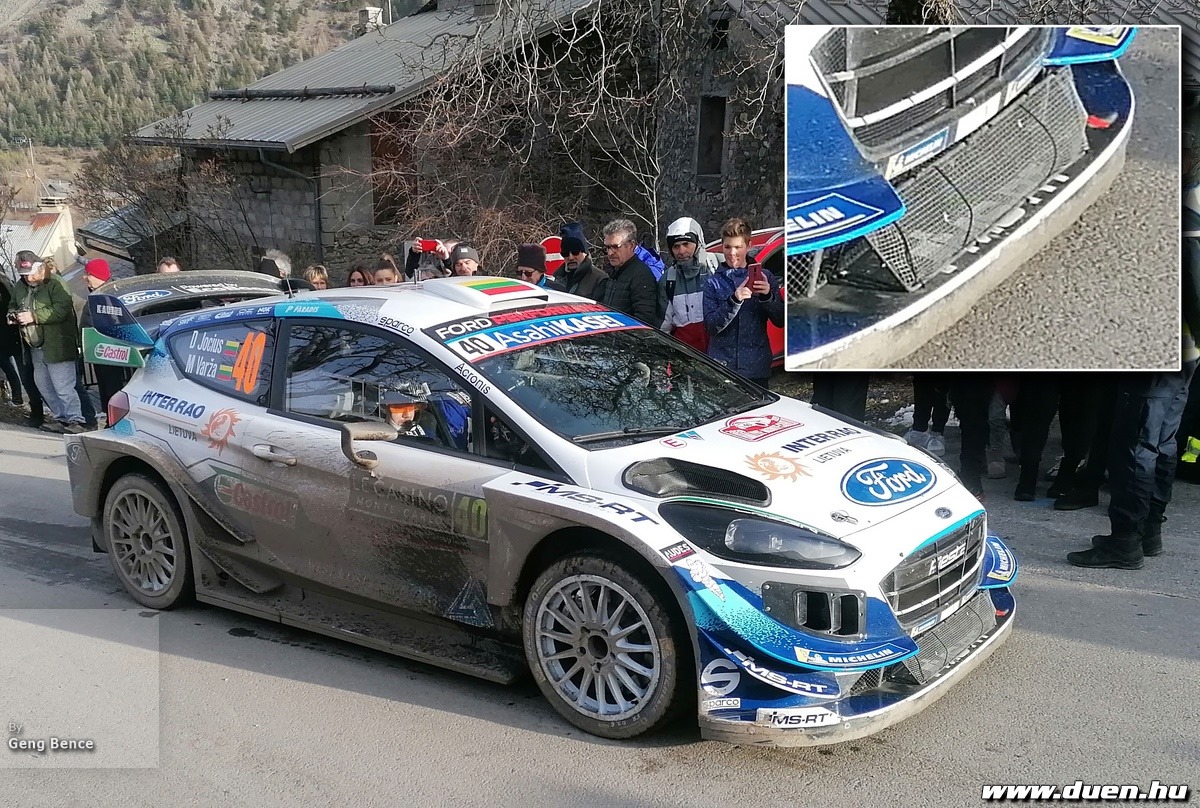 The sudden presence of snow in some stages caused different drivers to have small offs, often hitting the walls and barriers. The result was, again, the damage of some critical aero devices, especially dive planes and rear-wheel vents, that surely had a negative impact in the stages times, especially on those with fast portions. 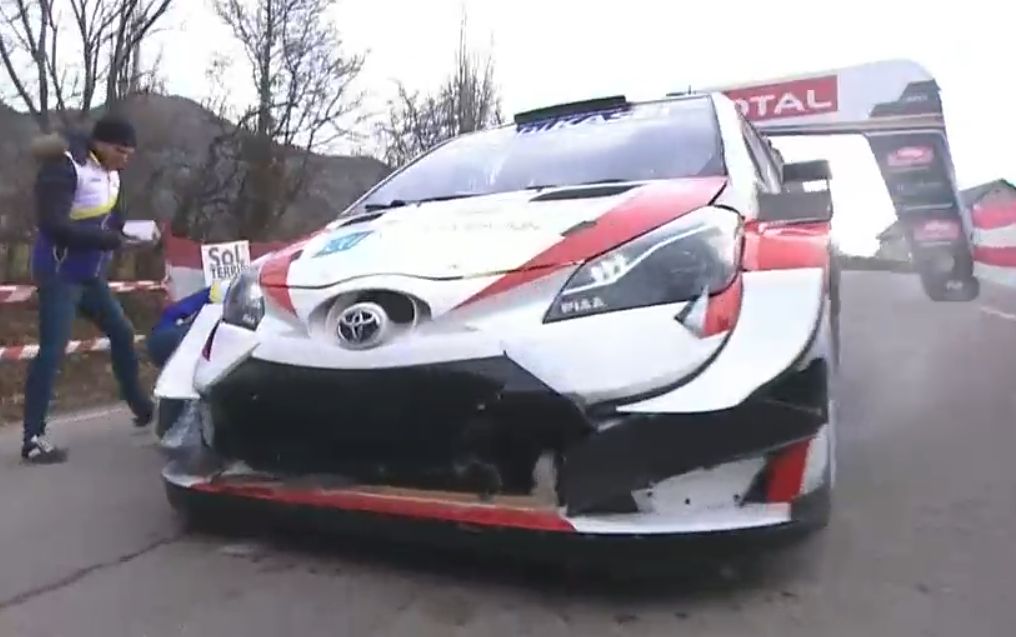 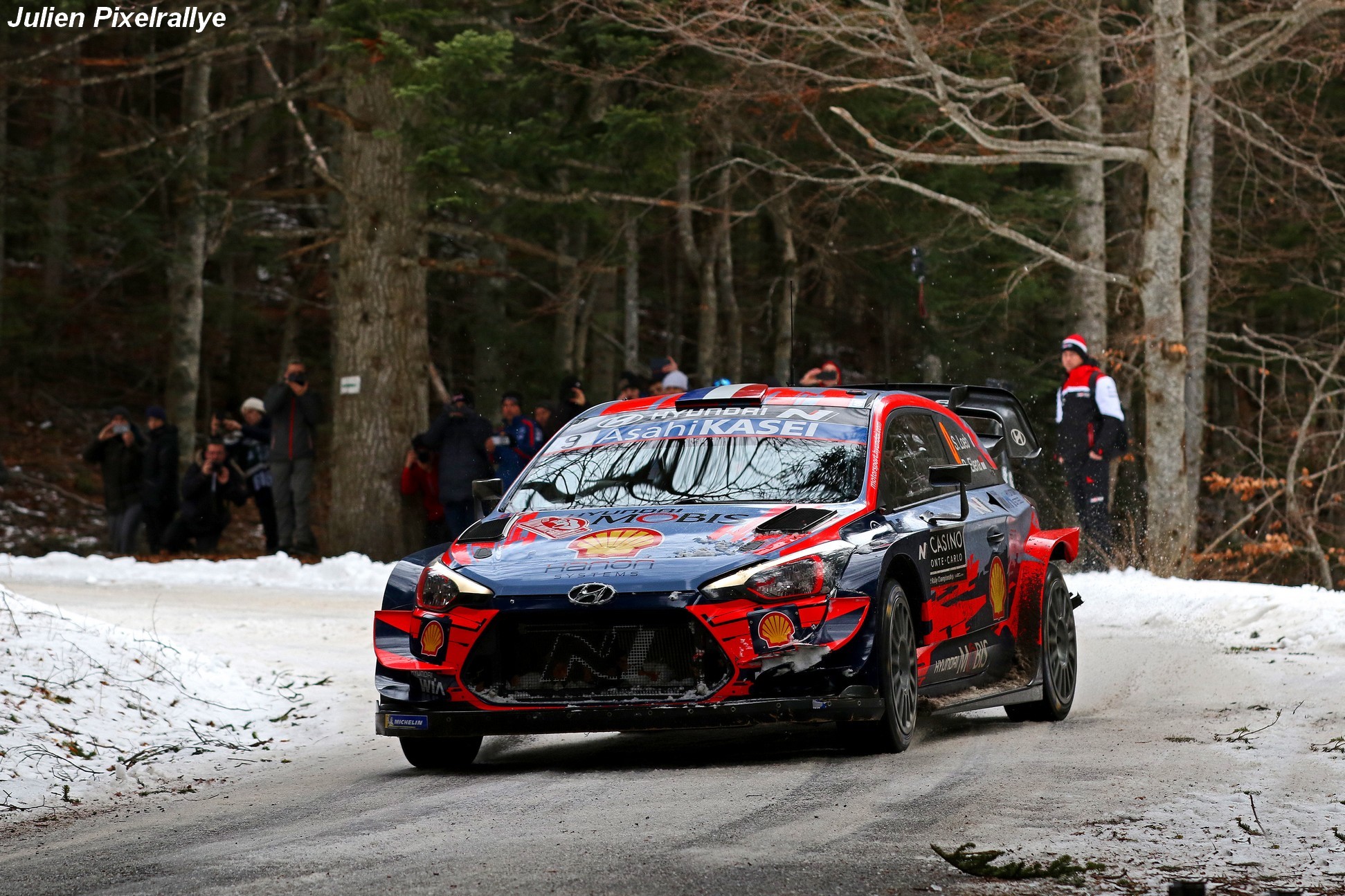 Aero modifications seen in the event

Hyundai was the team who had prepared more modifications for the season starter event. In the pre-season tests held on December 2019 and January this year, they had been testing a new rear diffuser configuration and a new design of the roof scoop. As we already analyzed in our pre-event post, the rear diffuser finally used in Monte Carlo was an intermediate between the original and the new diffuser seen in the tests. The main difference was the location of the exhaust gas pipe, which was still on one side of the diffuser. 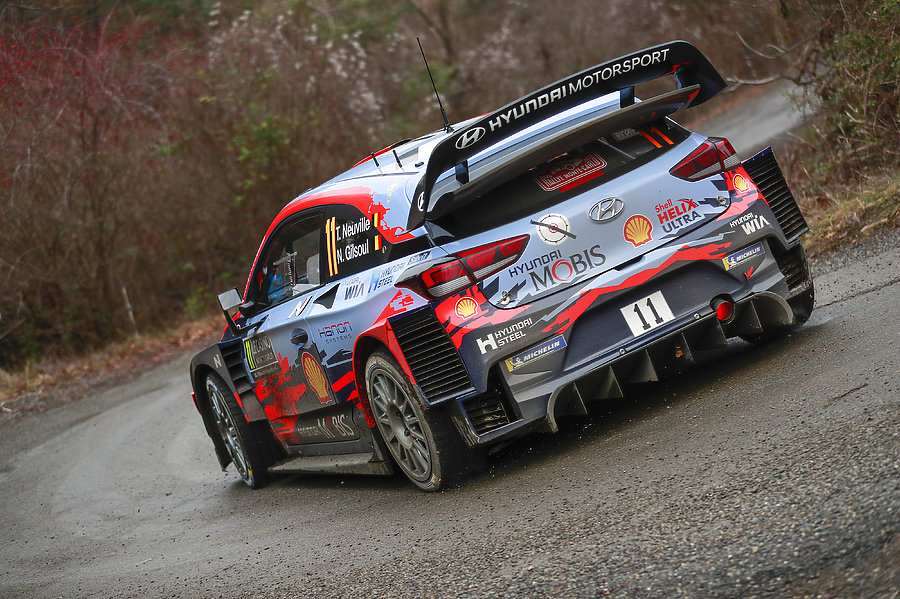 The new design of the roof scoop was introduced in all three WRC cars (see comparative with last year’s car below).

The surprise was not to see the new roof scoop also in the official R5 cars, aligned by Markko Martin’s Redgrey team, even though they were already seen in the tests developed in Sardegna last November. At least, the new side mirrors, also introduced in those tests, were updated.

Toyota’s cars incorporated the mud/snow rear fender vent design (with a reduced number of louvers) when they were discharged from the team’s lorries before the Rallye. 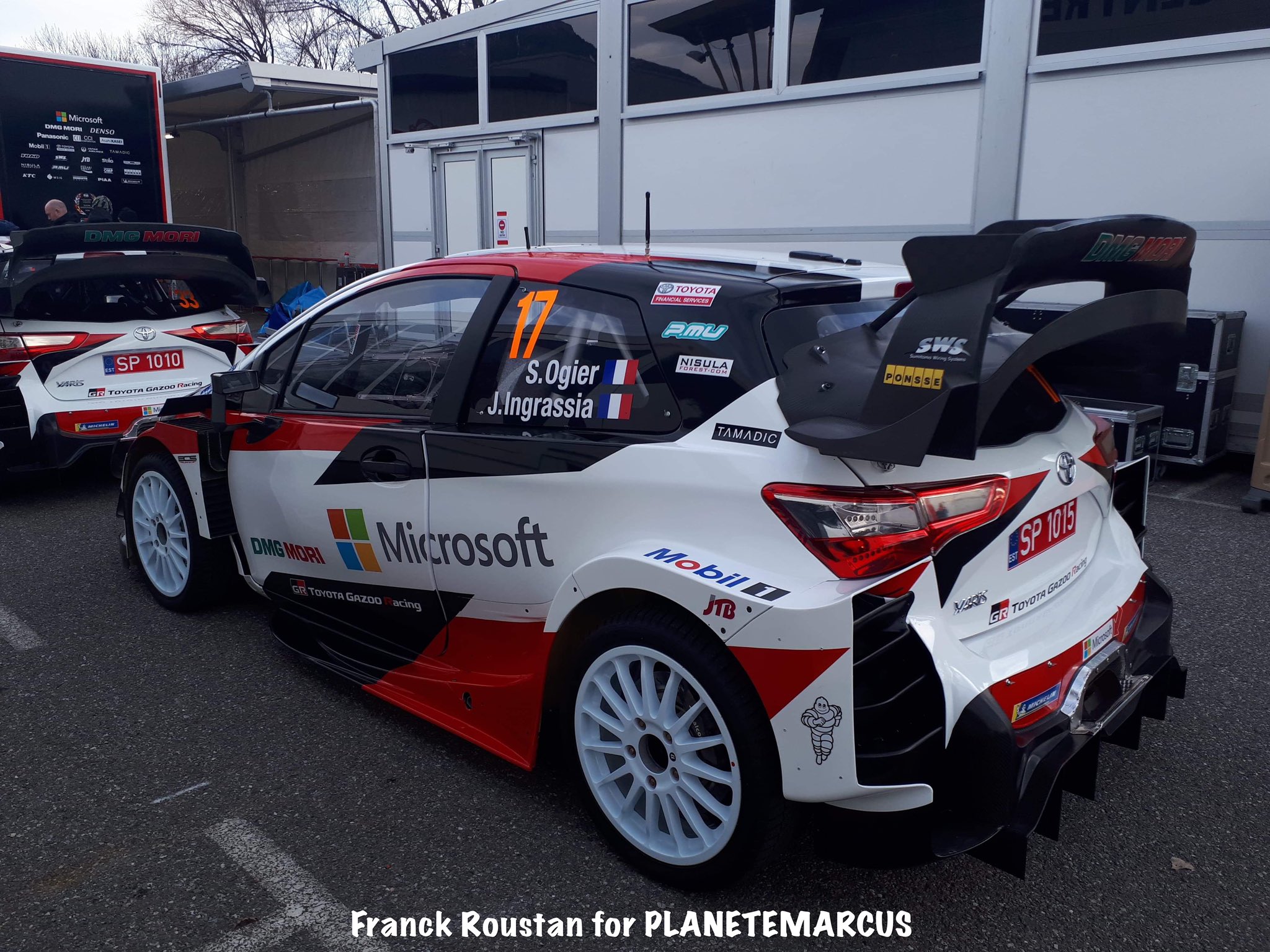 But they were not used at any moment during the weekend, probably because of the limited presence of snow and mud in most of the stages.

No aero modifications were seen in the Ford Fiesta WRC, as well as in the different R5 cars present in Monte Carlo.

All three Toyota official cars continued to use the new rims introduced in Rallye Deutschland last year, which were developed together with OZ to improve its reliability. They can be easily distinguished as the central part of the rim is less prominent than the old ones, which still were present in the car of Katsuta/Barritt. Also, the rear air intake for brake cooling is not still installed in Katsuta’s car. His car still had the old intake ahead of the rear wheel arch, but most probably it was blocked due to low ambient temperatures made it unnecessary.