The aerodynamics of a WRC car can be analyzed & optimized through numerical simulation (CFD – computational fluid dynamics), experimentation (wind tunnel) or the combination of both. Traditionally, the wind tunnel was the only tool available to refine the design made by engineers. Testing in a wind tunnel had and still has multiple advantages: measurements can be done on different configurations, combined with visualization techniques to confirm whether the air follows the path that engineers imagined during the car’s creation. But it has also some significant disadvantages: the main one is the elevated cost of using a full-scale wind tunnel facility, equipped with a rolling floor, to match the real conditions the WRC car will face in the rally stages. No less important is the lack of available facilities to perform such tests, which means teams and manufacturers have to queue up for long periods to finally get very few test days…or to get extra time during weekends at an extra cost. An alternative is to use scale models, which require smaller & cheaper wind tunnels of which the availability is much higher. But using scale models means that results are valid at a smaller scale. To convert them to real scale, higher than usual air velocities would be required (to keep the same Reynolds number) while normally air velocity decreases with wind tunnel size. So scaled wind tunnel testing is valid to see trends, rather than absolute values.

Scale model of a Citroën C3 WRC in the R.J.Mitchell wind tunnel of University of Southampton (UK) – extracted from this video by Citroën Racing

As we already analyzed in a previous post, most of the current WRC cars were designed following the most common schedule: the first design was evaluated by means of CFD, by internal resources in the case of Hyundai, Citroën and Toyota, or by external companies (Totalsim in the case of Ford/M-Sport). When results were satisfactory, validation and refinement in a wind tunnel were developed, with scaled models (as Toyota and Citroën reported). Only M-Sport declared to have done the full design process just by CFD. For them, the validation in the wind tunnel came more than one year later, when Ford Performance support finally arrived. And the tests developed in the Windshear wind tunnel confirmed the excellence of the CFD design process undertaken by M-Sport. But, even more important, they also confirmed the validity of CFD techniques for replacing the experimental work developed in wind tunnels.

But what exactly does it mean to numerically simulate the aerodynamics of a rally car? To get a better idea, we count on the knowledge and communication abilities of Wouter Remmerie, from AirShaper.com, who kindly accepted our proposal to introduce us to this subject in more detail.

To analyze the aerodynamics of a car, CFD (computational fluid dynamics) techniques are applied. There are 3 main steps in this process: 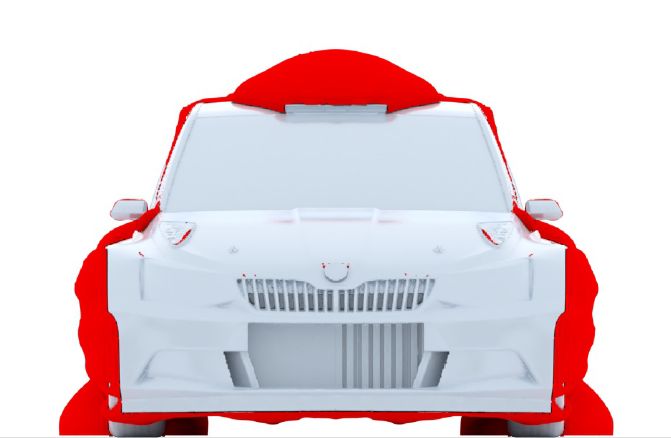 Skoda Fabia R5 front underpressure clouds (in red) allow to identify which elements cause drag, so they can be smoothed*

When it comes to rally car aerodynamics, there are some extra complexities. Like the 3D model for example: especially in the development phase, these models are put together under big-time pressure, often leaving small gaps & holes in various places. Traditional CFD codes require the models to be “watertight” (no holes) and delay the design process for weeks, as the designer needs to fix the 3D models first. At AirShaper, we’ve spent years to make our code compatible with such “open surface” models and this really helps the teams to speed up the design process. 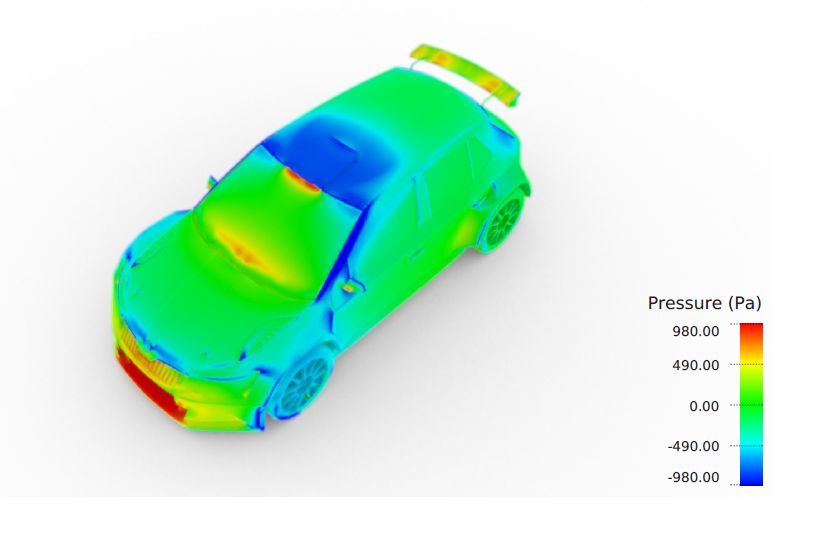 Another challenge for the teams is that experts in CFD are in high demand and usually there is a queue to get something done internally or at a CFD agency. To eliminate that problem, we, at Airshaper, have automated the entire process. Setting up a simulation has been reduced to a 5-minute effort: upload the 3D model, set the velocity & orientation and order the simulation – no CFD expertise required. Once the simulation is done, users can analyze the aerodynamics of the car using the full report, online visualization or full scientific data (for those experts that do want to make their own interpretation of the results 😊). 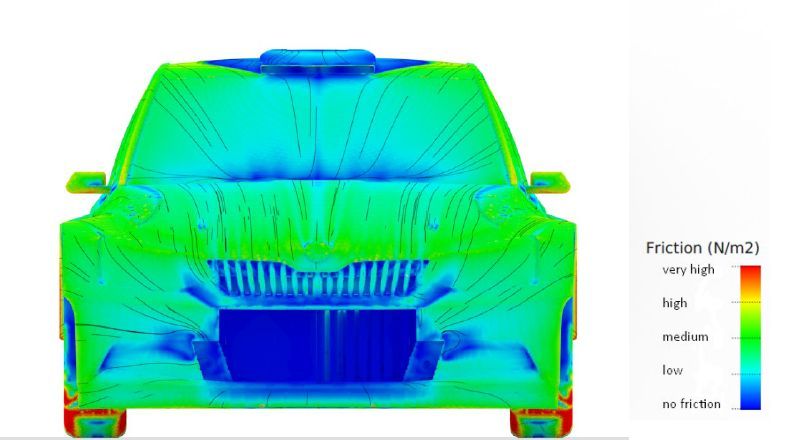 Skoda Fabia R5 CFD analysis of surface friction, another cause of drag, so it can be minimized*

Surface pressure maps, 3D visualization of sources of drag, 3D streamlines, etc. and of course key figures like drag & lift values enable the user to gain proper insight into the aerodynamic performance of the car.

As new designs can be analyzed just as quickly as the first simulation, they can iterate at a very high pace to get to a design with better aerodynamic performance. The feedback comes in at a very high pace. In short, the key is to speed up the entire process: racing is time-critical, not just on the track but also in the design process.

Also, you can see some of their excellent videos at www.airshaper.com/videos such as this one. 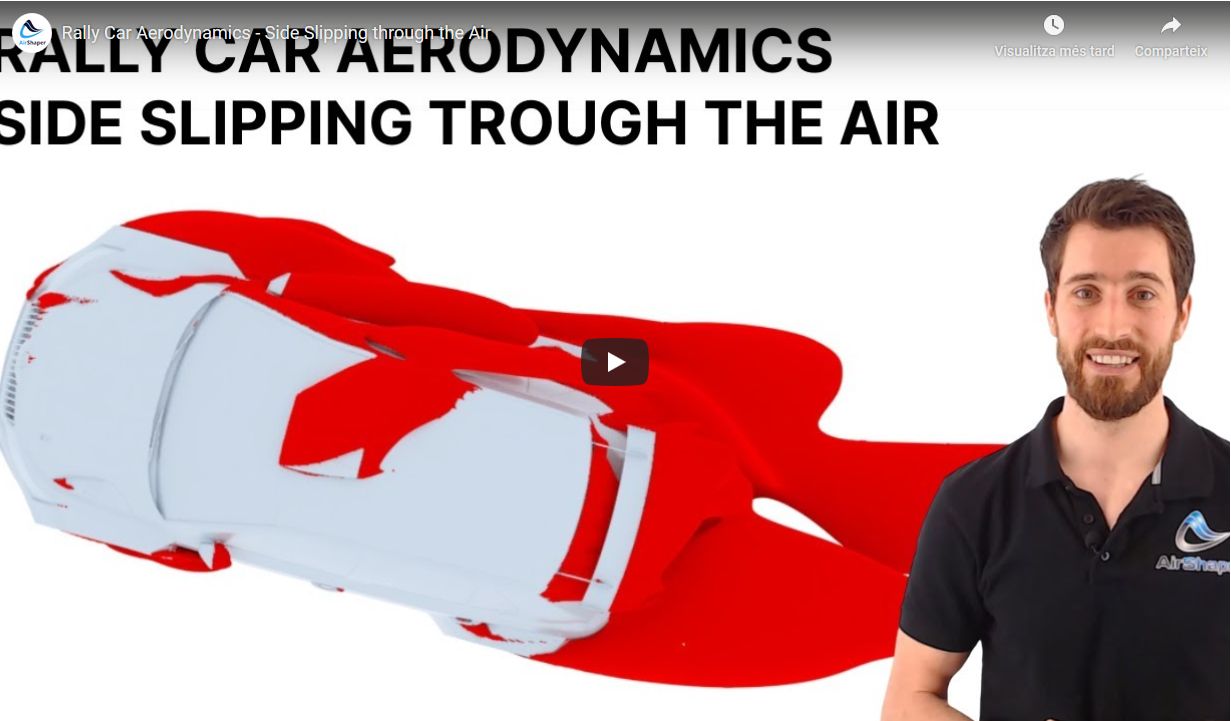 *The CFD images that illustrate this post have been obtained using a public model of the Skoda R5 car.