The heat that WRC cars’ brakes generate by friction needs to be cooled down to keep their performance consistent and effective. All current WRC cars use air to cool them down, and in most of the cases, they force air to flow into the brakes to make cooling more effective. Such practice has some aerodynamic implications that need to be considered, before reviewing how air flows onto the brakes. 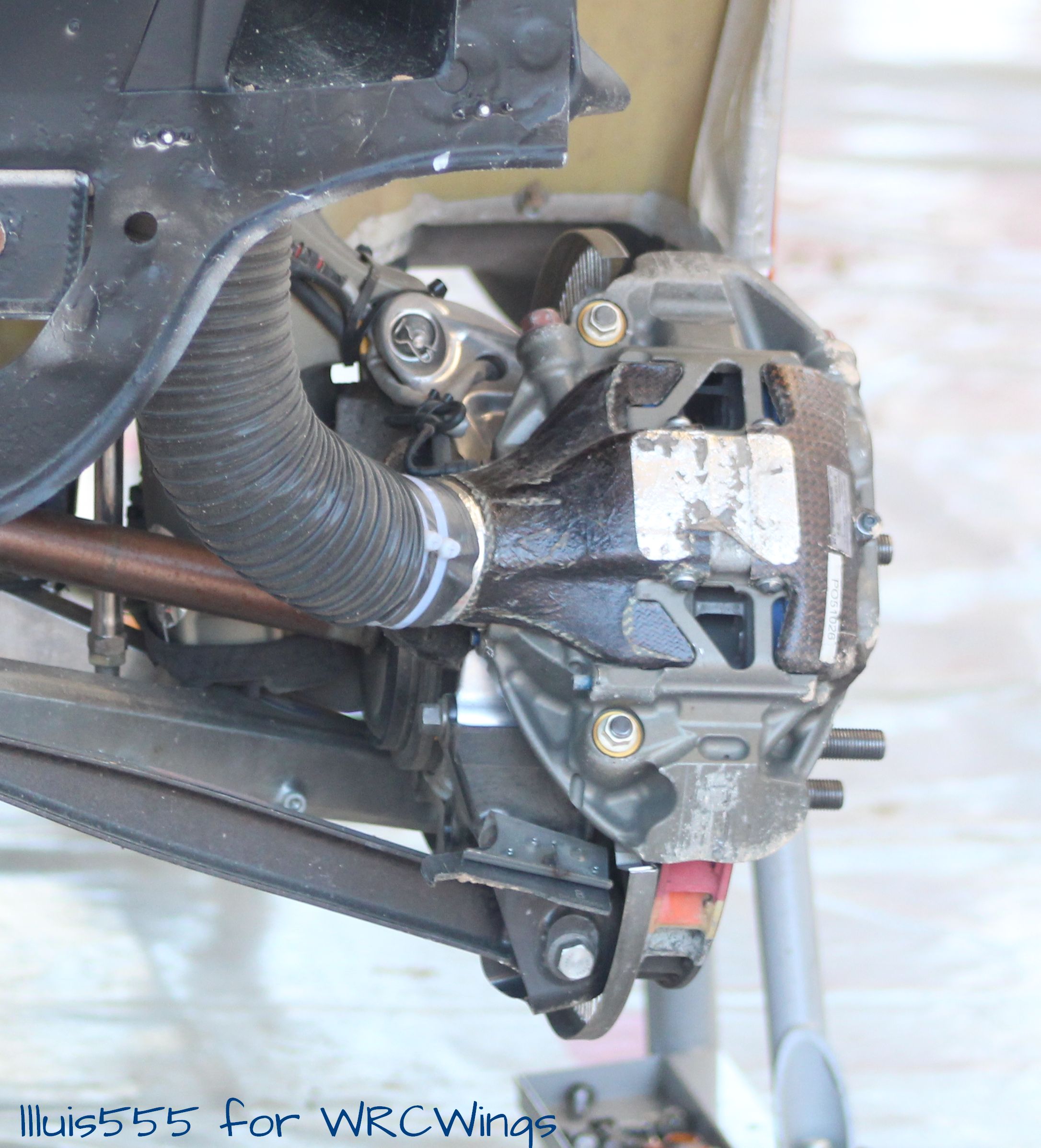 One of the main issues is the drag this type of flow causes on the car, due to the pressure drop generated due to airflow inside the car. The higher the pressure drop, the higher the drag (air resistance) but also the lower the cooling capacity. For this reason, it is very important that ducts feeding fresh air to brakes and transmission generate a minimal pressure loss, so they must be as geometrically simple and short as possible.

Another adverse effect is generated by the removal of the cooling air. But this will be the subject of the second part of the post, which will be available soon.

Front brakes are always the most demanded, so they are the main source of heat of all the brake system. This means they are bigger than rear brakes. To cool them down, all current WRC cars include a small air intake in the front bumper exclusively dedicated to feeding fresh air into brake pads and/or disks. As this is one of the areas of higher pressure due to the impact of the main flow over the car, an adequate airflow is easily obtained by placing the inlets there.

In all cases, inlets are protected with a grid, to avoid gravel, dust, mud, stones, leaves or any other particle to enter into the cooling system, which would cause cooling efficiency losses. The clearance of the grid has to be small enough to prevent any particle from entering into the duct but, at the same time, big enough not to cause a significant air pressure drop, which would also reduce the cooling efficiency.

Most of the WRC2 cars also include such independent entries at the front bumper to feed their brake cooling systems.

Note that some teams remove the front duct inlet in gravel stages, to avoid gravel entering into the system. This can be done as brakes usually generate less heat on gravel stages (due to lower grip), so less cooling capacity is required. It was the case of the Citroën C3 R5 driven by M.Østberg/T.Erikssen in the Rally Catalunya 2019. The picture above shows the car during the second leg (tarmac stages) while the picture below shows the same car during the first leg (gravel stages). No ducts are present in the gravel configuration. 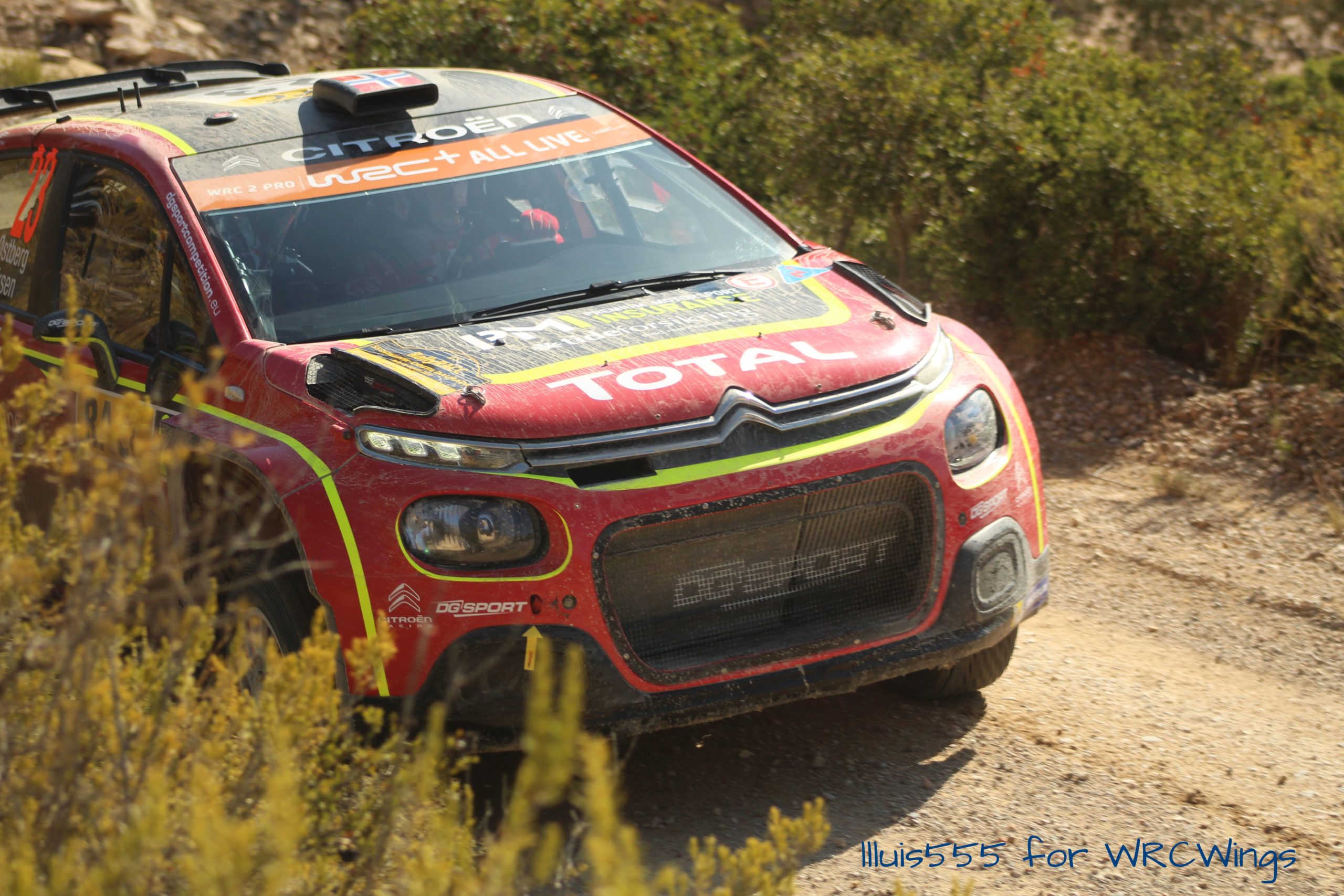 Once air enters into the car, the goal is to generate the minimal pressure drop, to maximize cooling efficiency. For this reason, the geometry of the air ducts has to be as simplest as possible. Corrugated pipes are used, to allow maximum pipe flexibility when wheels turn, while at the same time offering high reliability. Teams follow different strategies for brake cooling.

Toyota, with brakes supplied by alcon, uses fresh air to cool down the brake pads. 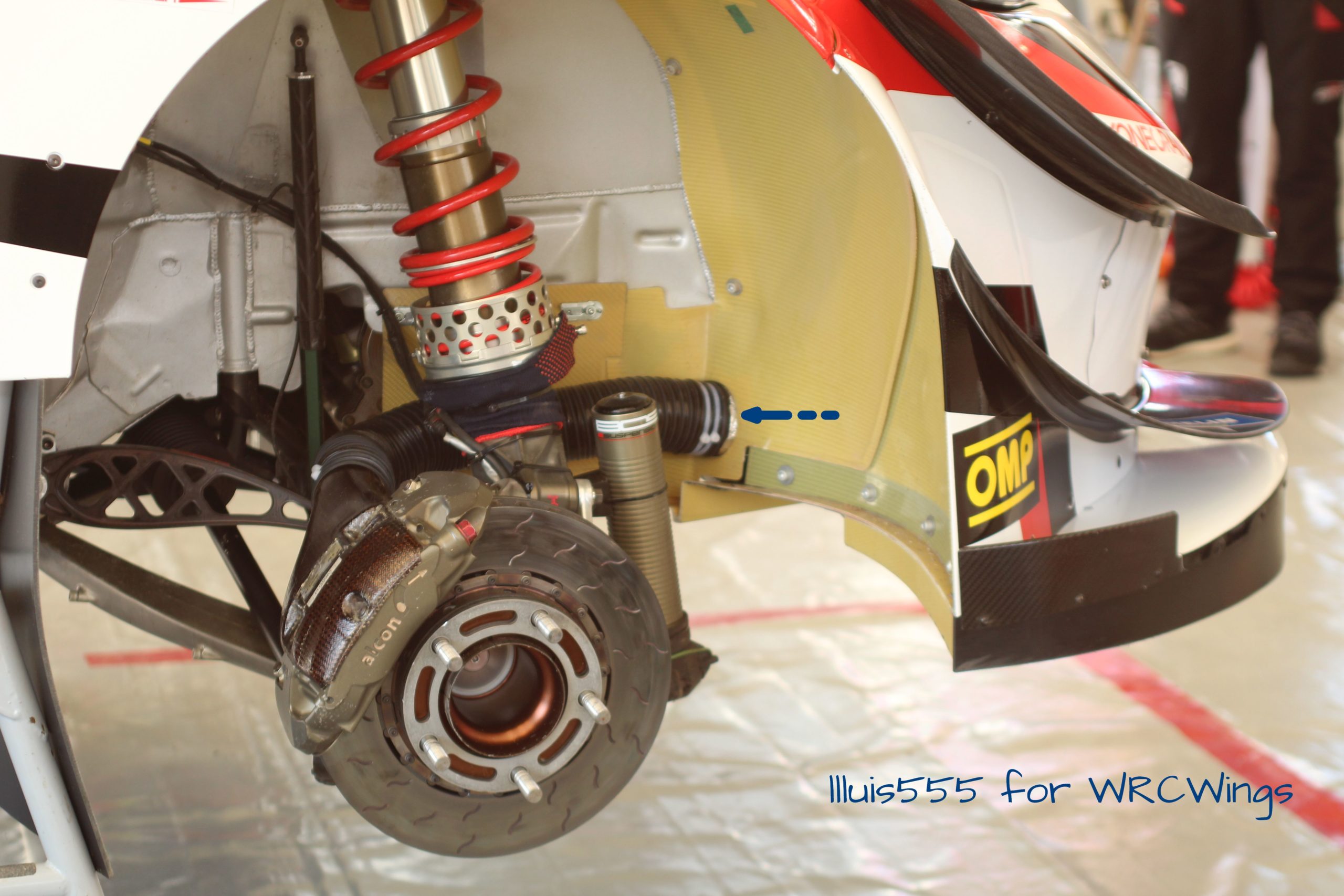 Pictures below show how Hyundai uses the fresh air for the Brembo‘s front disks cooling of the i20 Coupé WRC. 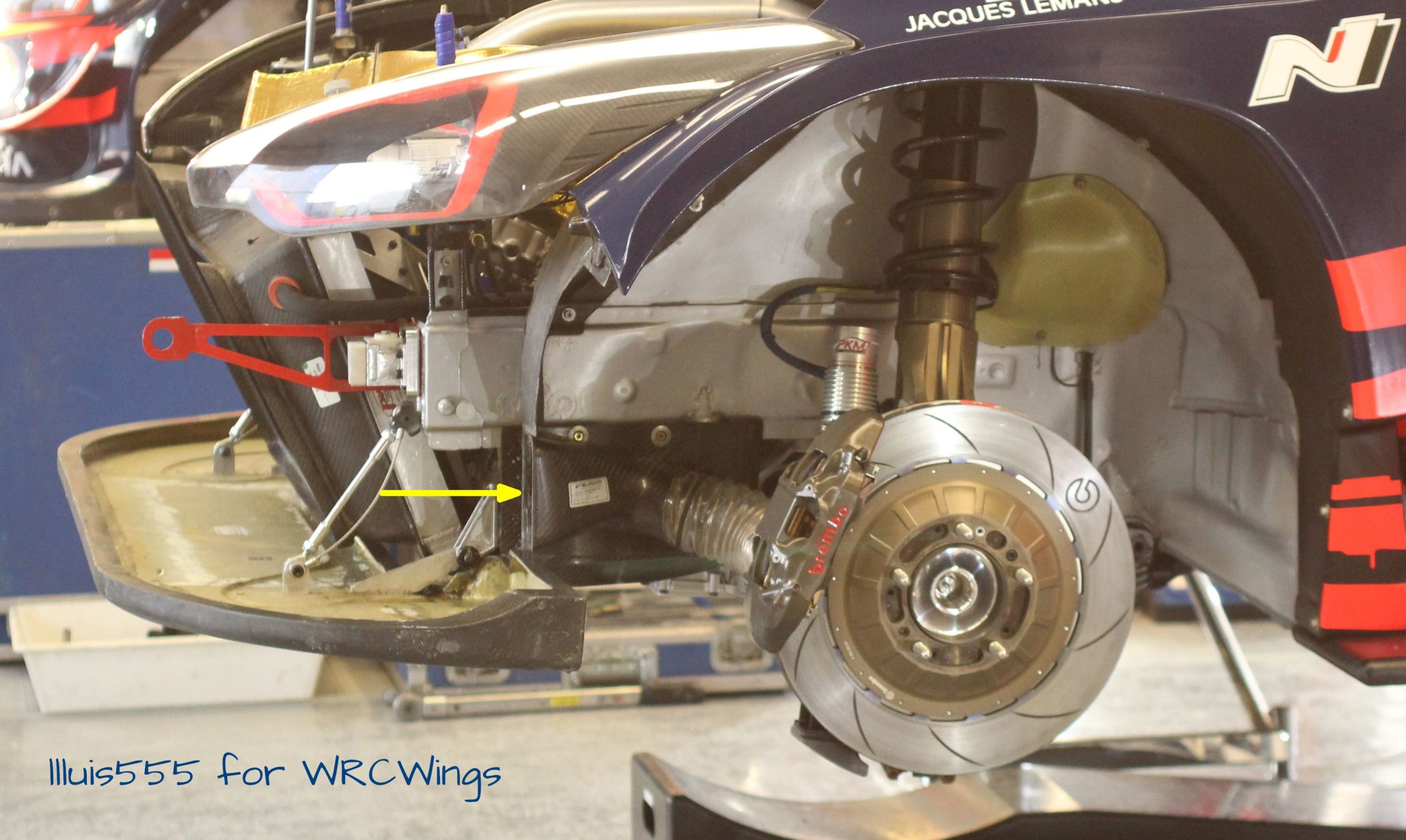 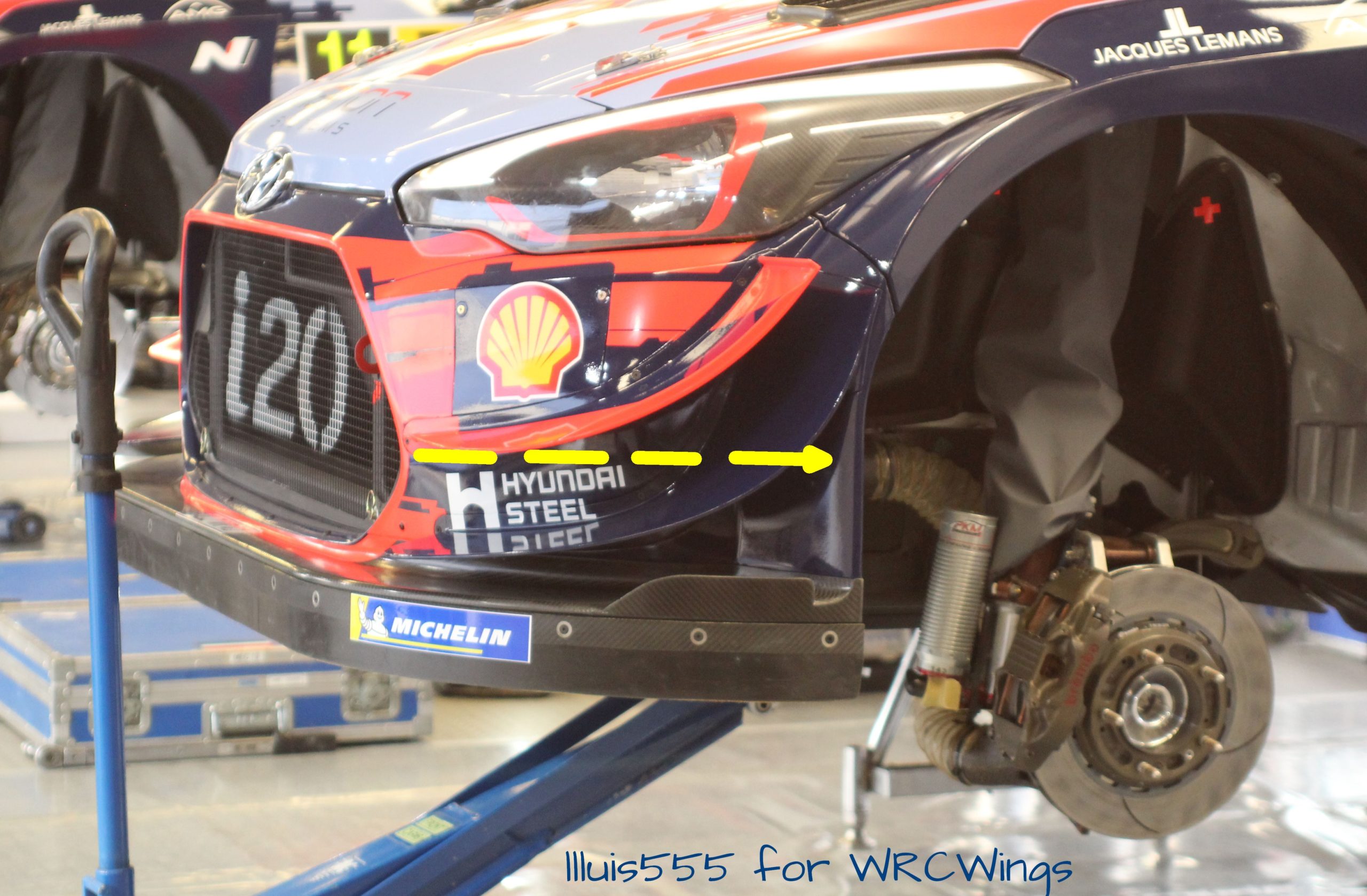 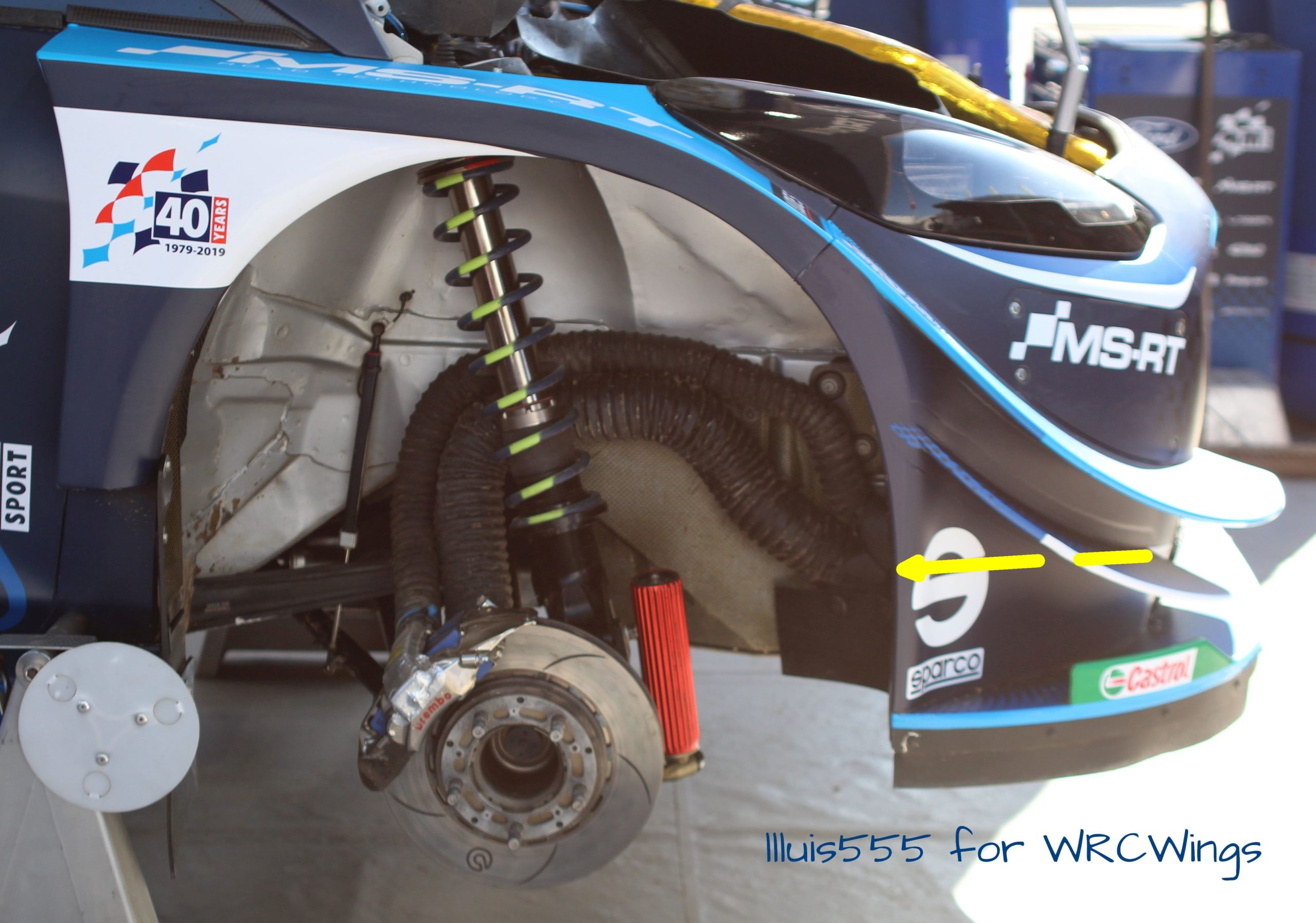 The Citroën C3 WRC, with alcon brakes, has only one air duct, connected to the rear of the disk. 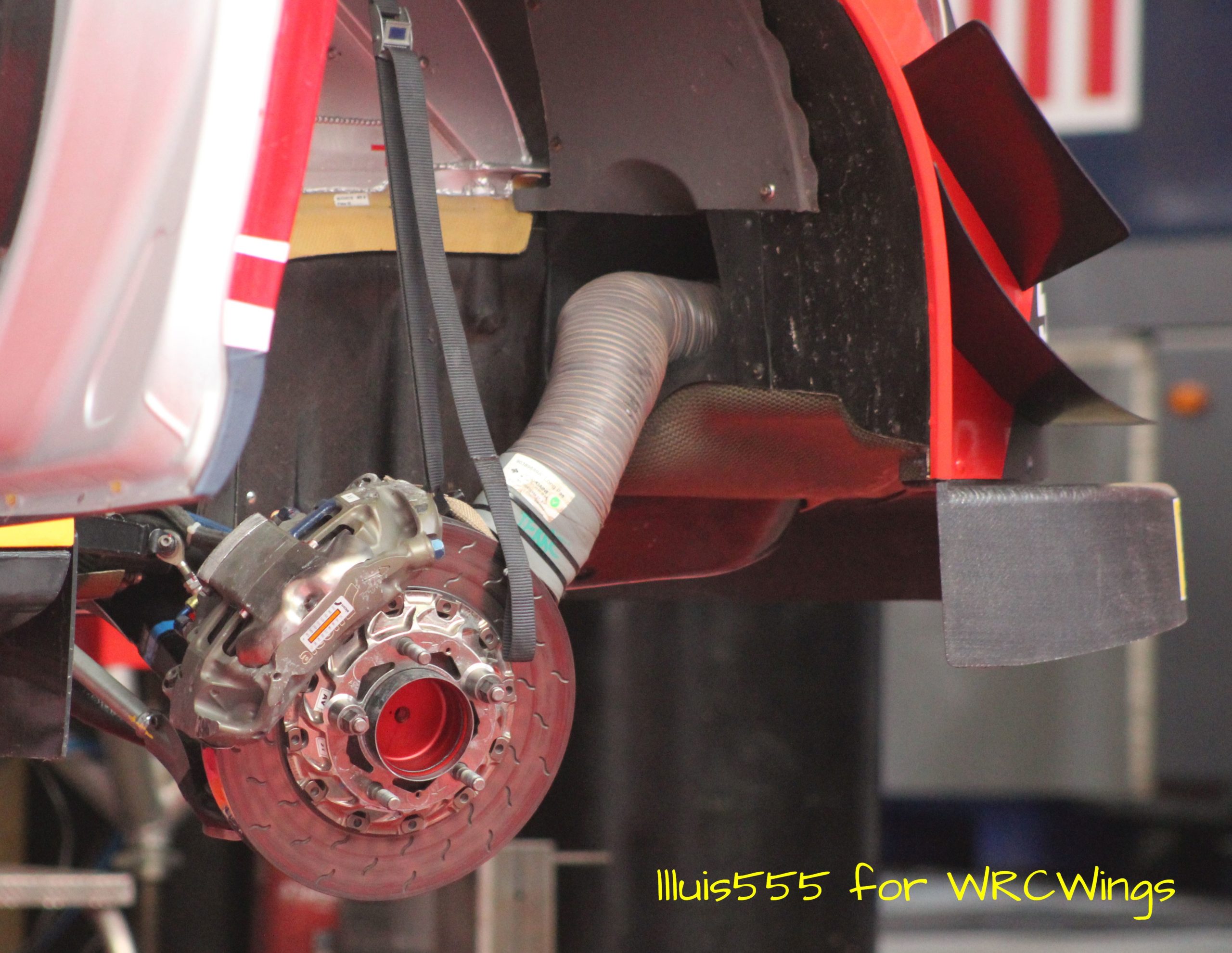 The amount of heat generated in the rear brakes is always smaller than in the front brakes. For this reason, and especially on gravel events, where the requirement for brakes is less  (due to lower grip), external air feed is not always required. Although all current WRC cars include air intake for rear brakes and transmission, they are not always used, and it is common to see the cars with these inlets blocked. In this case, brakes are cooled down just by ambient air, with no forced flow available.

It is also important to note that air intakes to cool down rear brakes are located at the car sides, where pressure and airflow are not so important as they are at the car front (where air for front brakes is obtained). This is one of the reasons why Hyundai included in the original design of the i20 Coupé WRC (and it is still in use) an air inlet on top of the car’s side panels. This is an area with significant airflow, caused by the effect of dive planes and front fenders. To capture as much air as possible, they used a NACA duct intake. This is known to be the most effective solution in terms of pressure drop, leading to higher cooling efficiency. 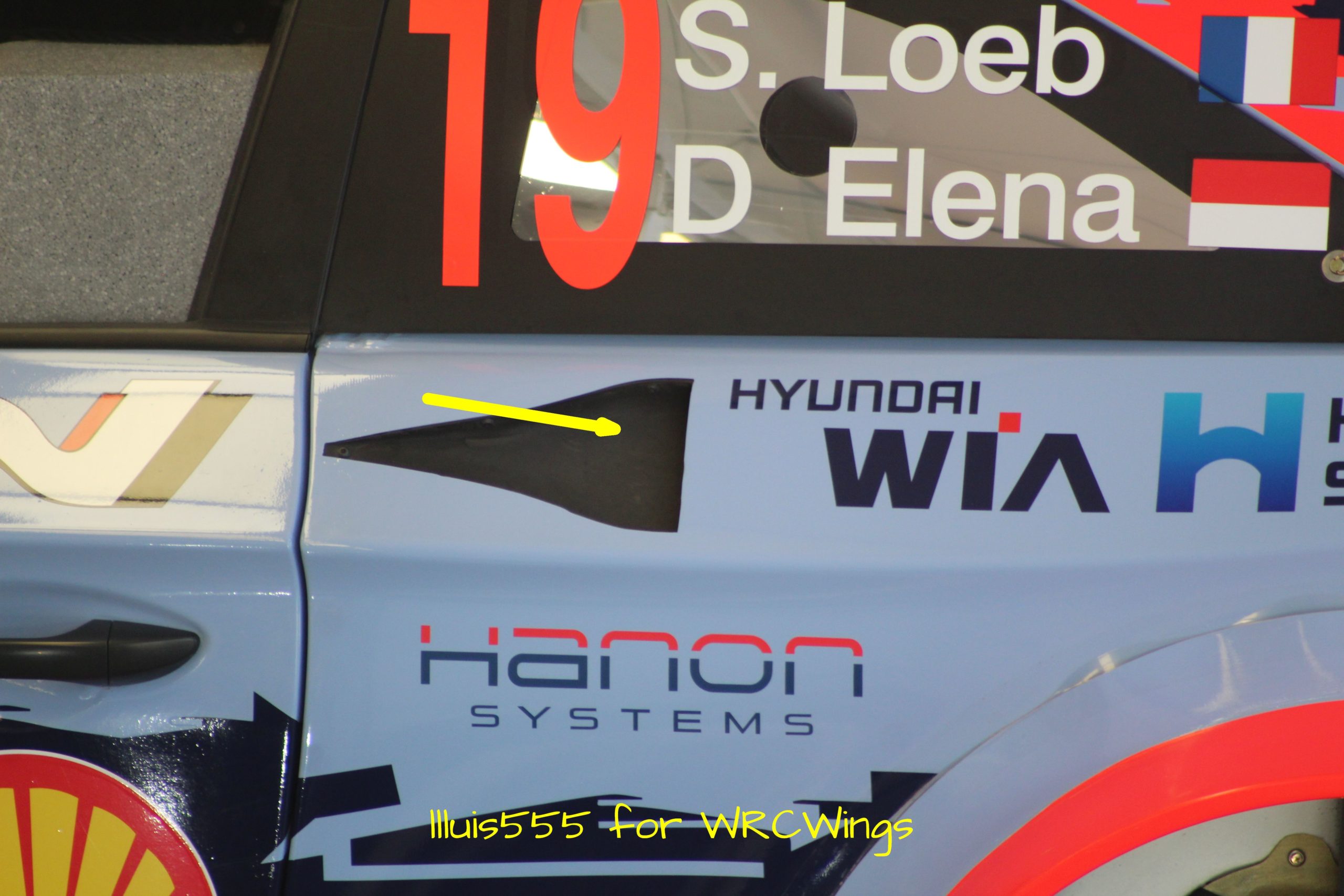 In the Toyota Yaris WRC original design, fresh air was obtained from a small inlet located ahead of the rear fender. This is an area where airflow is more turbulent, due to the effect of the front wheels’ wake, and high concentrations of dust and mud can be found in the air there, 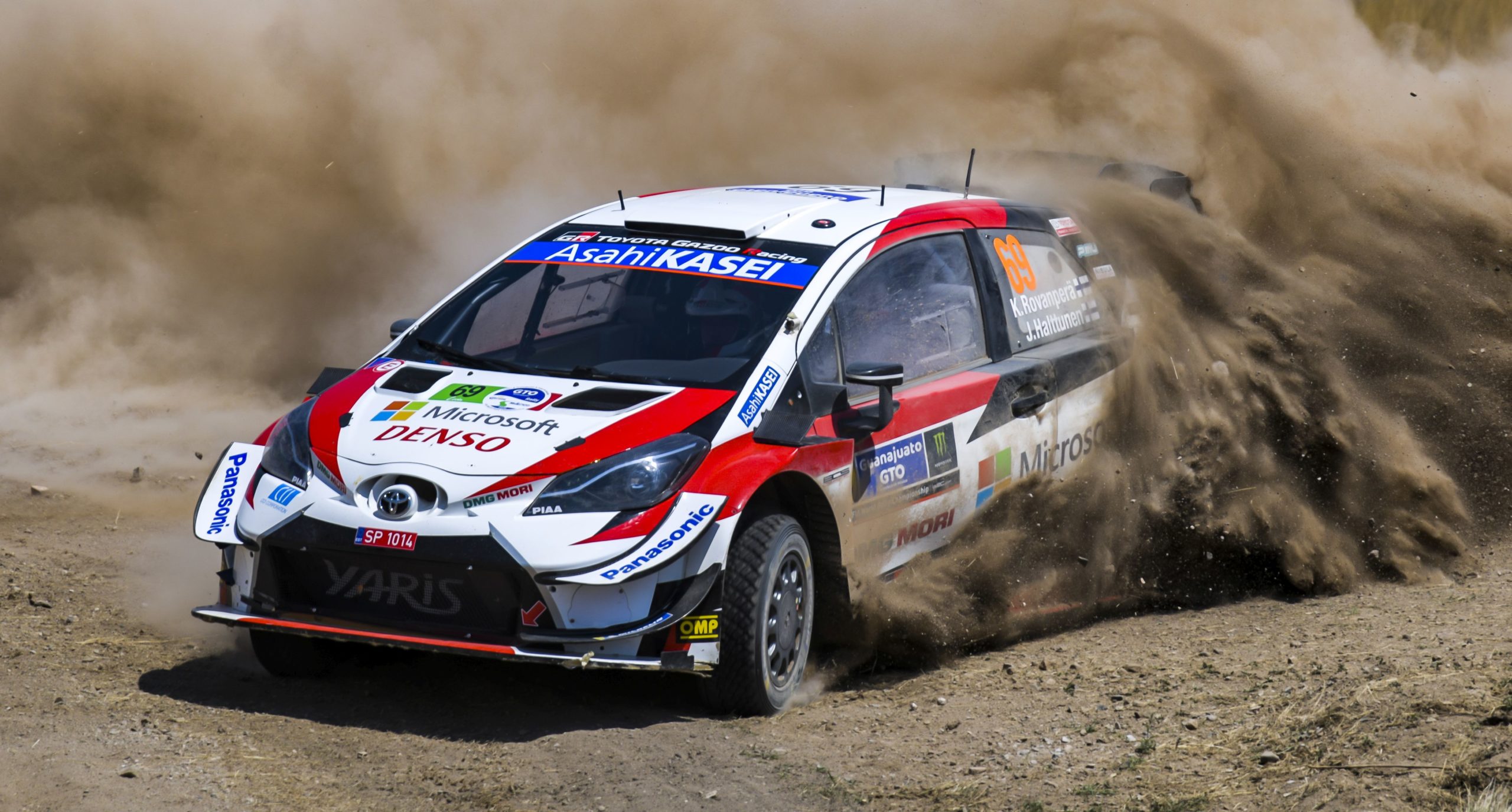 The original configuration is still used in Katsuta/Barritt car. The picture below shows the inlet (blocked). 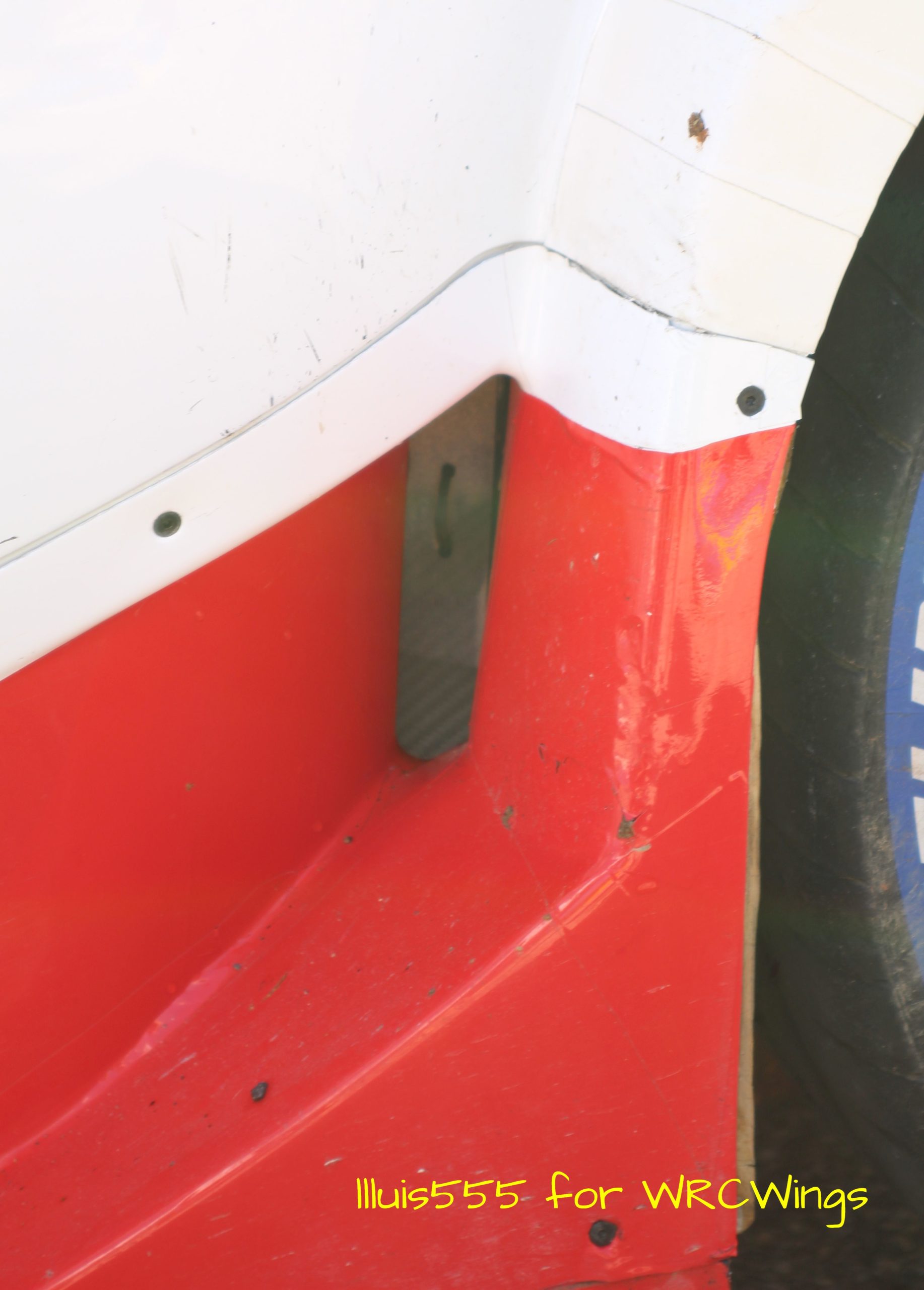 Since Rally Deutschland 2019, the Toyota Yaris WRC includes a new air inlet, located on top of the side panel, in a similar design of the Hyundai. 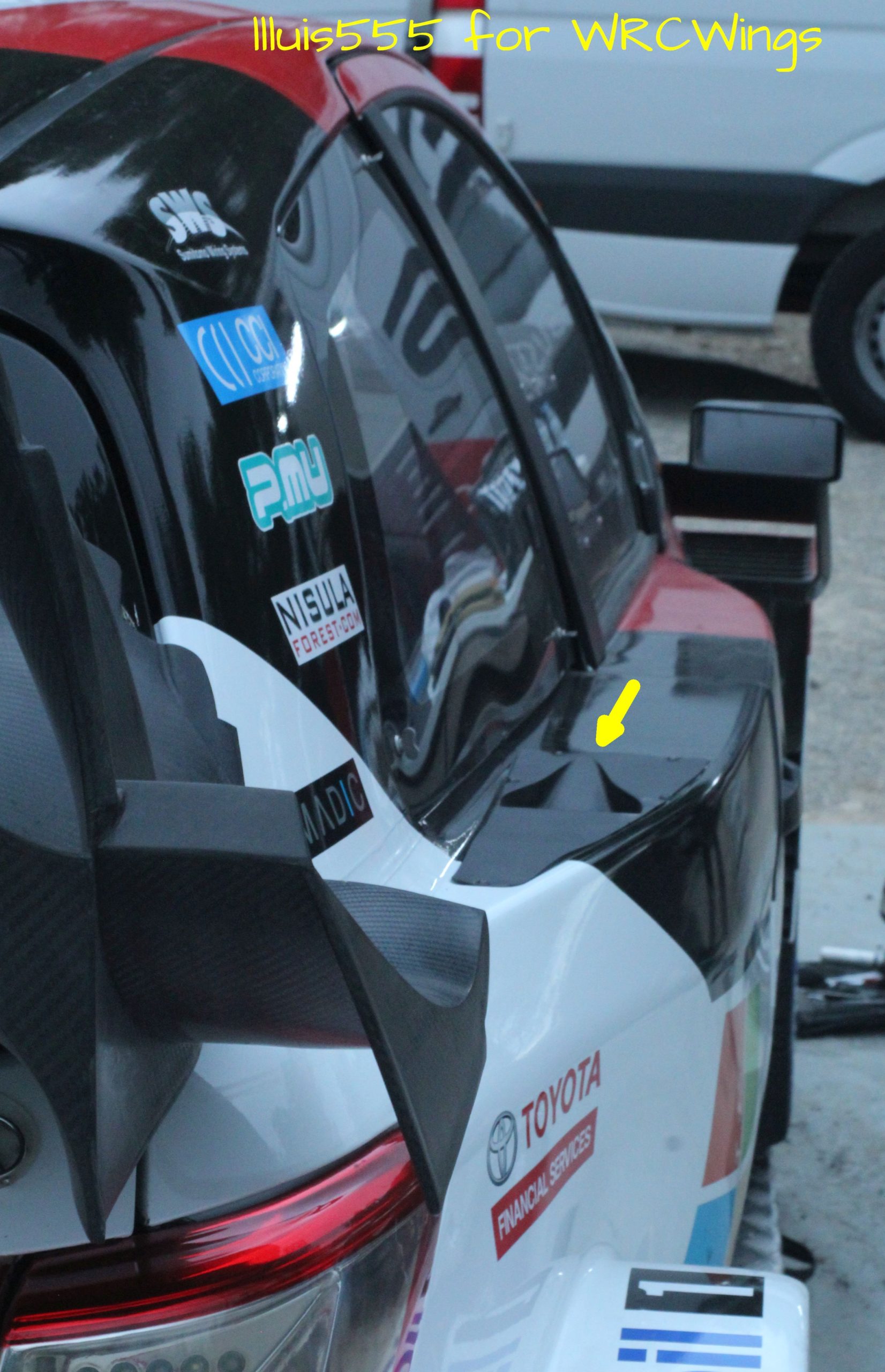 Ford located the air intake right ahead of the rear fender, between the two side dive planes. Due to this location, a mesh had to be installed to avoid plugging of the cooling system. 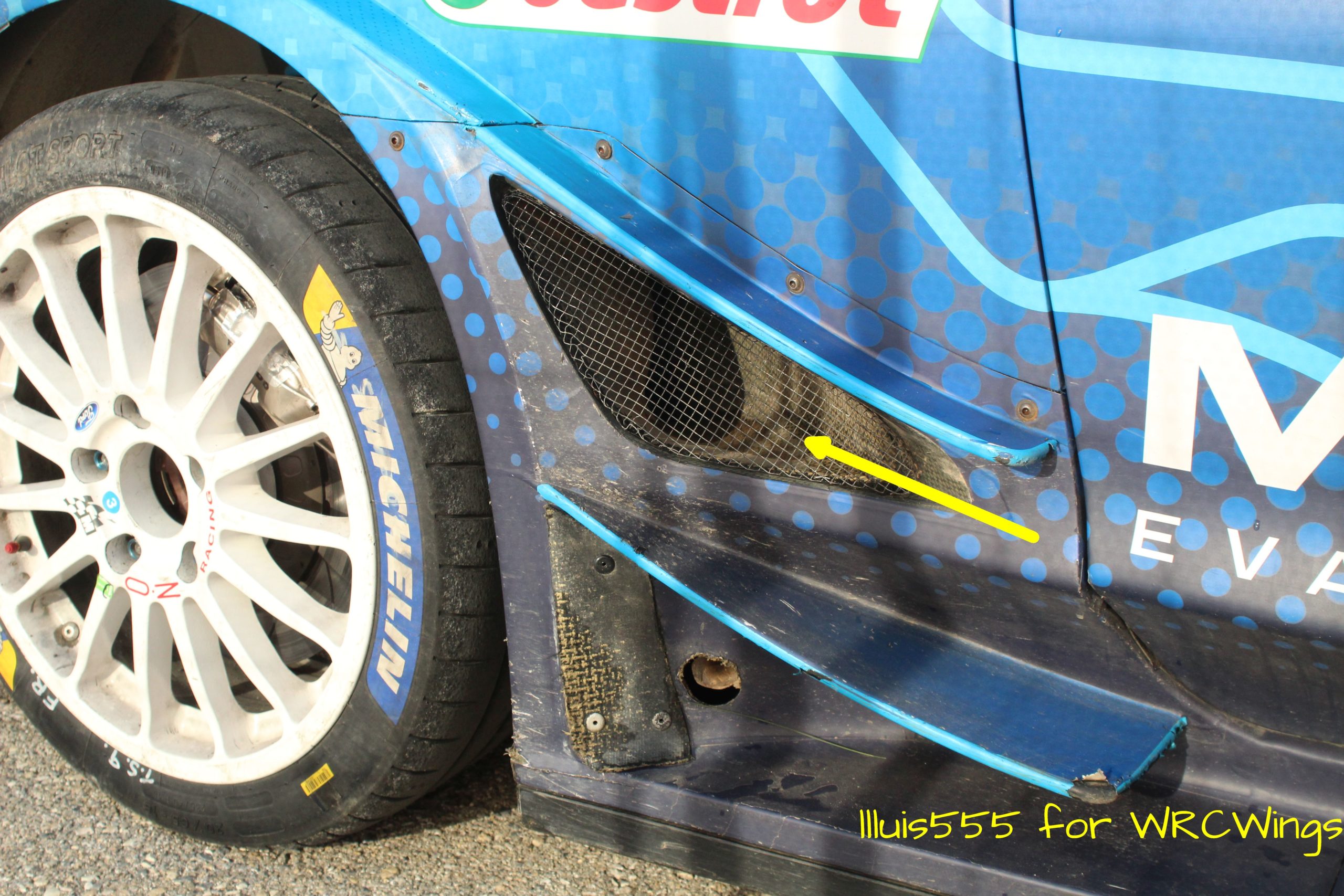 The Citroën C3 WRC rear brake intake is located at a similar location than in the Fiesta, and it also incorporates a mesh. 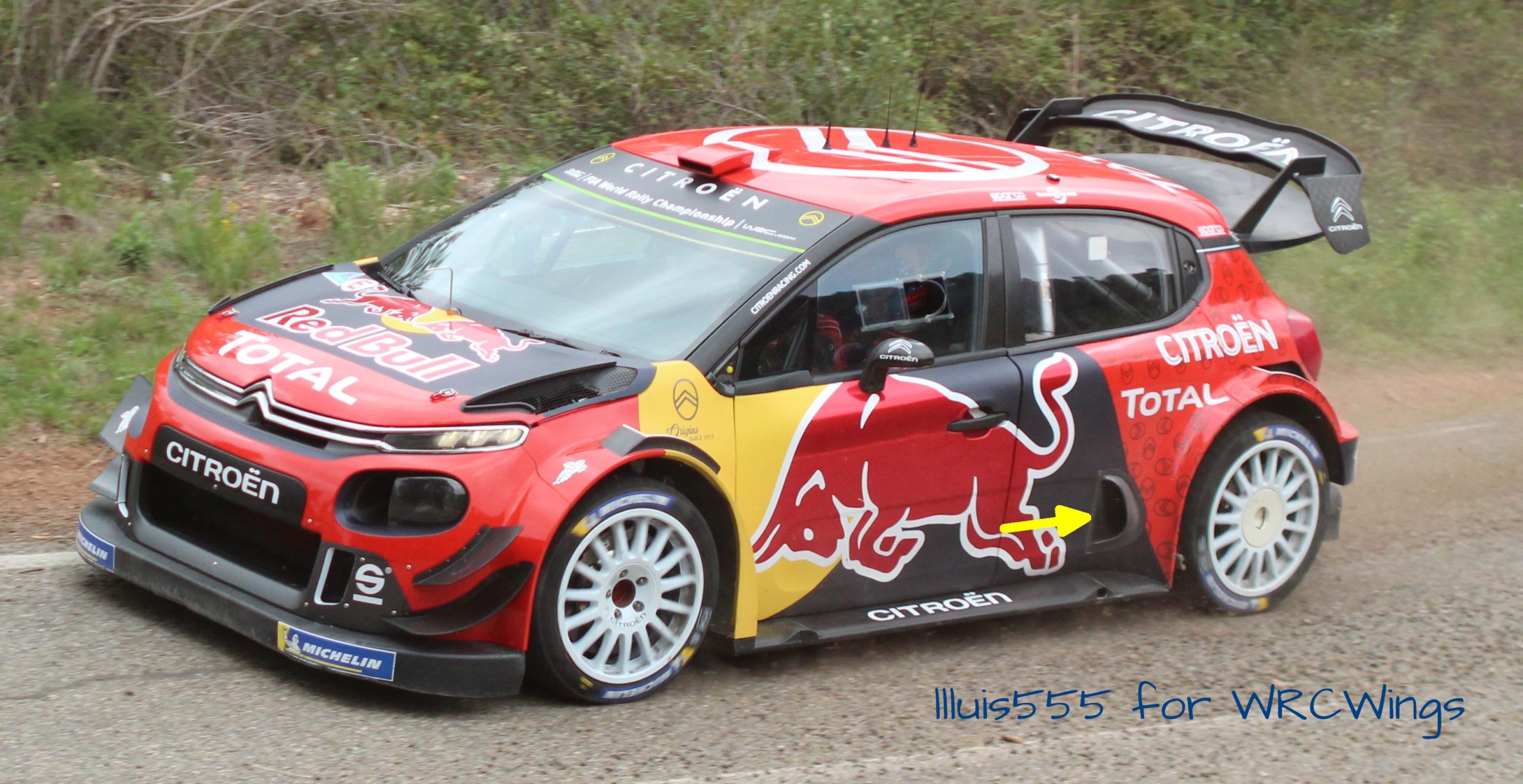 When the rear air intakes are used (not blocked), again a duct with the simplest geometry is used to feed fresh air to the rear brakes. For those cars using an air intake on top of the car sides, the duct has to bent down, which increases the pressure drop (due to the elbows of the duct) and reduces cooling efficiency. This is the case of Hyundai and Toyota. 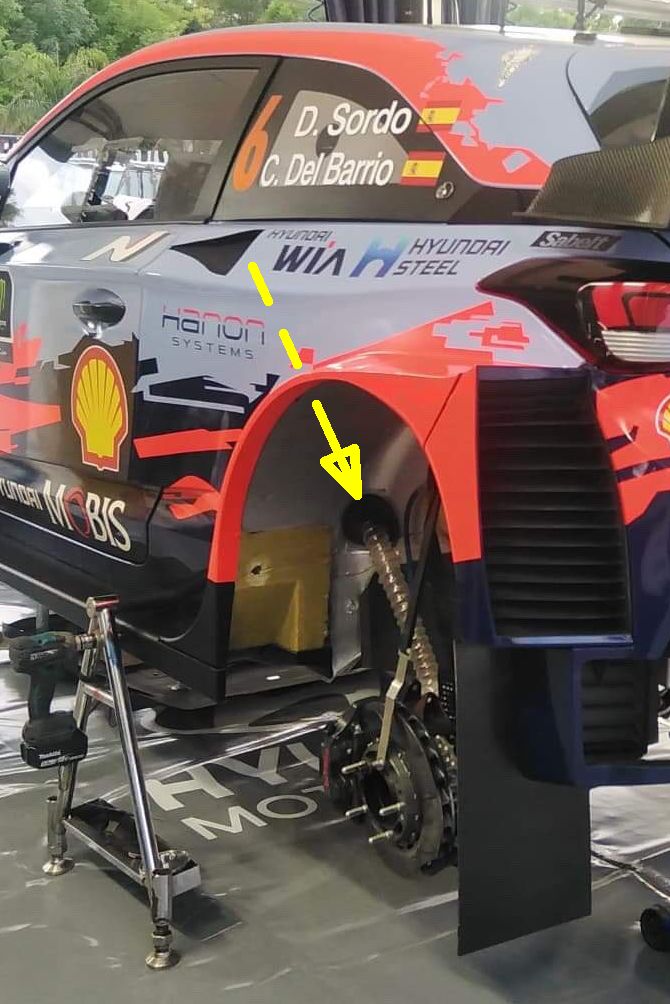 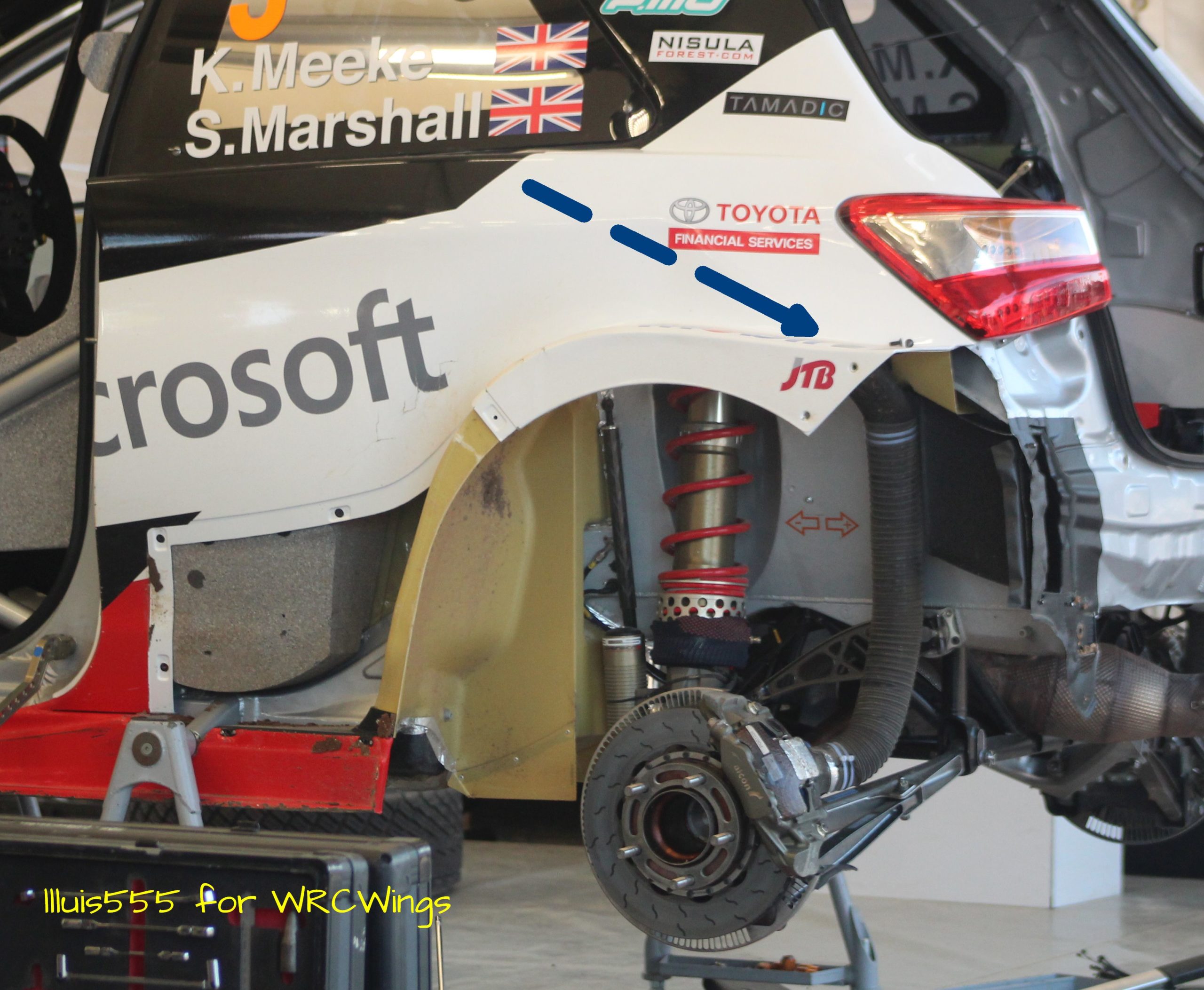 Ford has a simpler design, with three independent ducts: two for the rear brakes and a third for transmission cooling. 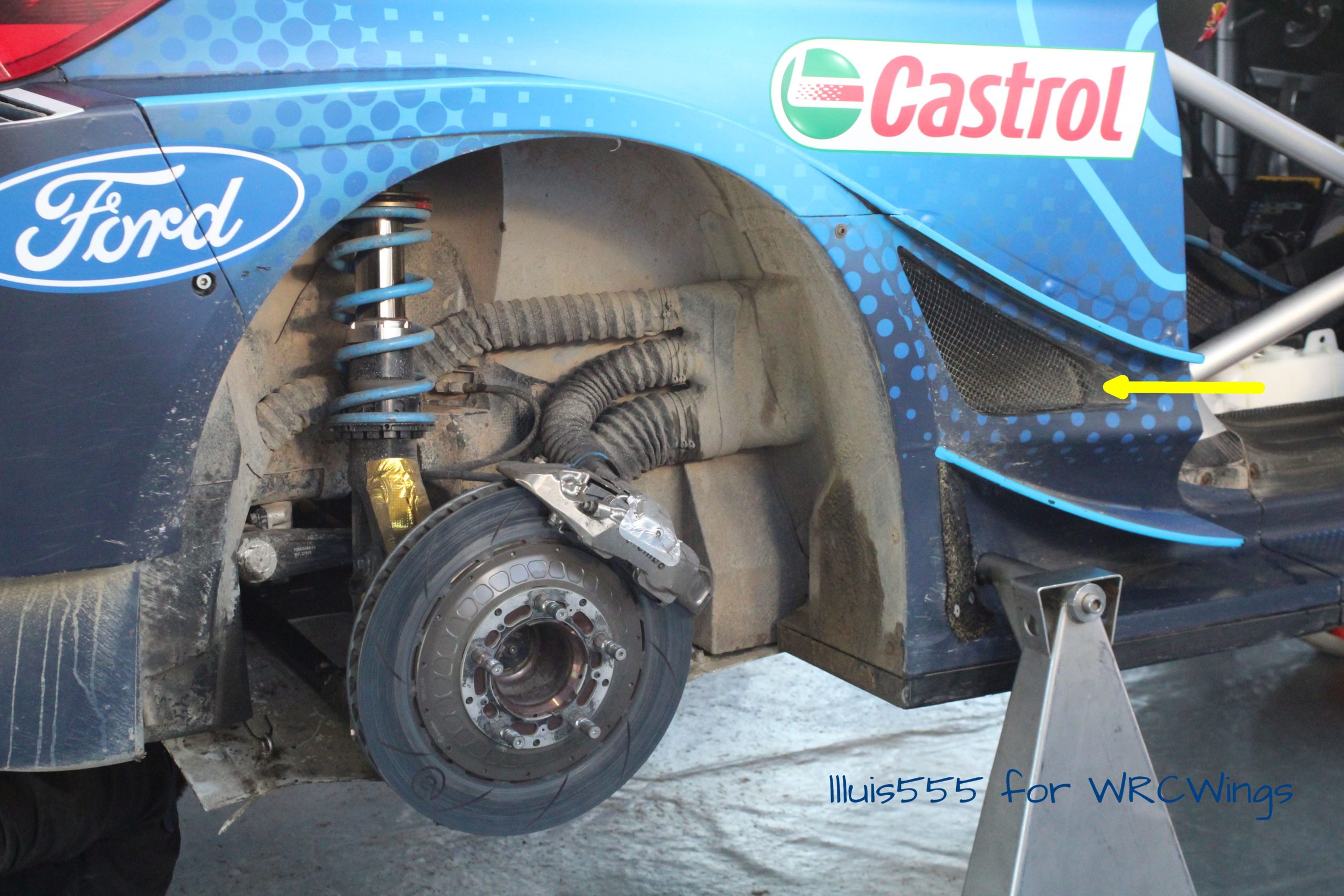 The simplest configuration seems to be that of the Citroën C3 WRC, as the duct is almost a straight pipe causing a minimal pressure drop to the system. 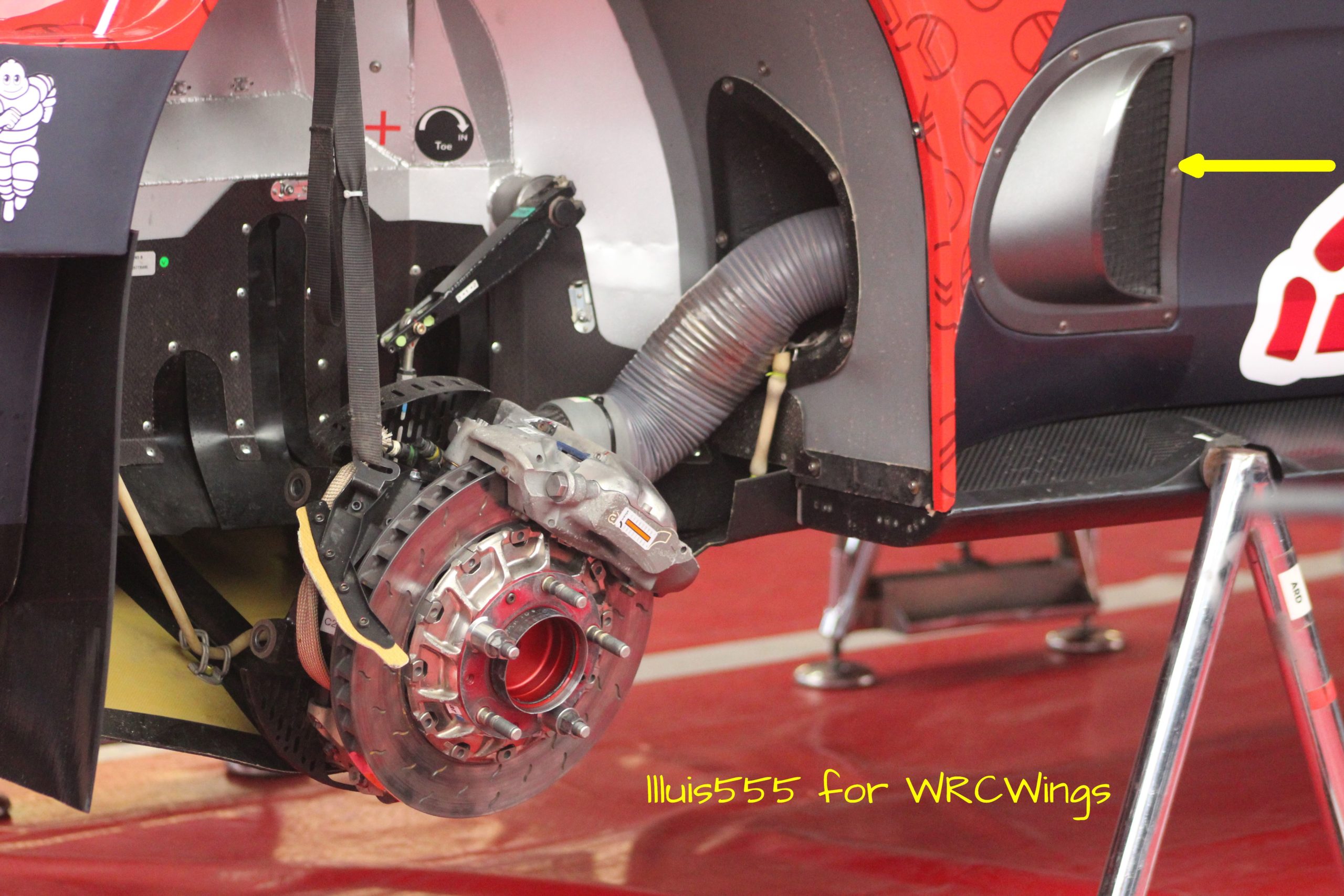 This is a quick overview of how current WRC cars cool down their brakes. How brakes are cooled in detail probably would require a dedicated post, so, for the moment, it’s better to read what brake specialists can explain. Fortunately, Brembo has prepared some very interesting pages which are worth to review, on the brake systems in detail and how brake systems change depending on the event surface.

The second part of our airflow review, corresponding to how brakes’ cooling air is removed, will be covered in a future post.