In a previous post, we reviewed how fresh air is forced into the brakes of a WRC car for cooling purposes, and the aerodynamic implications it has. Once the braking system cools down, the hot air accumulates in the wheel spaces and under the car, which then has to be removed. How each car designer team solved this problem and even took advantage of it is the topic of the present post. 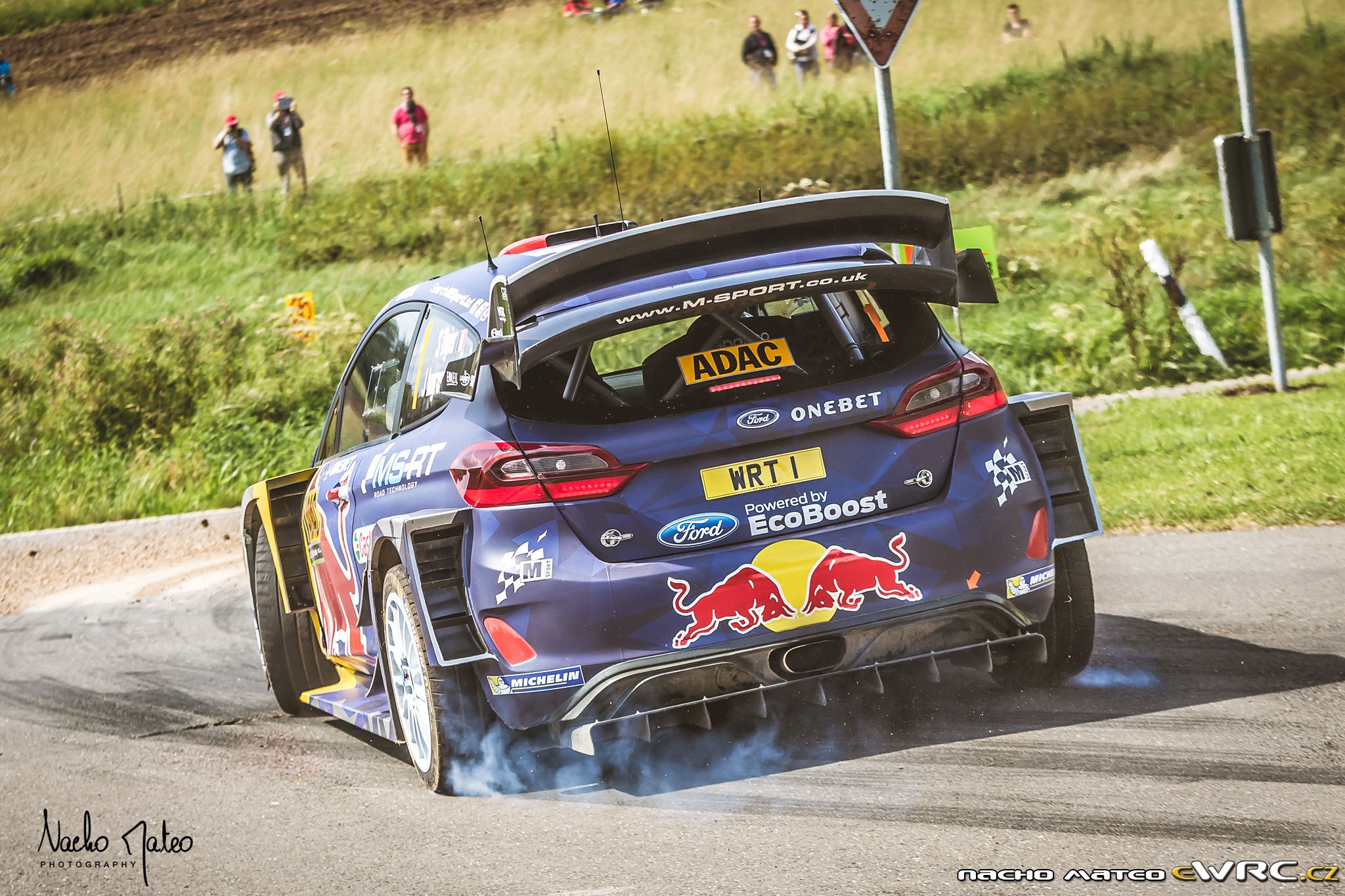 The addition of air into wheel spaces is beneficial in terms of cooling, but it has a negative impact on the aero performance of a WRC car. Firstly, because forcing air to enter inside the car increases the total air resistance (drag) of the car, in comparison with a car with no air intake (due to the loss of energy the air faces while traveling inside the car). Secondly, we are adding a huge amount of air inside the wheel spaces and also, under the car. The consequence is that pressure increases under the car, while airspeed is reduced, and downforce generation by pressure difference with the top of the car is reduced. So, the air has to be removed as quickly as possible from the wheel spaces. Each manufacturer has designed different solutions for that, which differentiate from front to rear wheels.

The original design of the front fenders of the 2017 WRC car generation was simple. Toyota and Ford (left and center in the picture below) included a long, vertical vent, in order to take advantage of the air removal along the sides of the car. The Yaris only included two small separators, so air could flow in parallel to the car, while the Fiesta included some deflectors that sent the air upward. On the contrary, Hyundai included a small vent with four louvers. The addition of louvers contributes to getting a more stratified exit flow (less turbulent). The higher the turbulence, the higher the drag this flow would cause, and the higher the disturbance on the air flowing on both sides of the car. 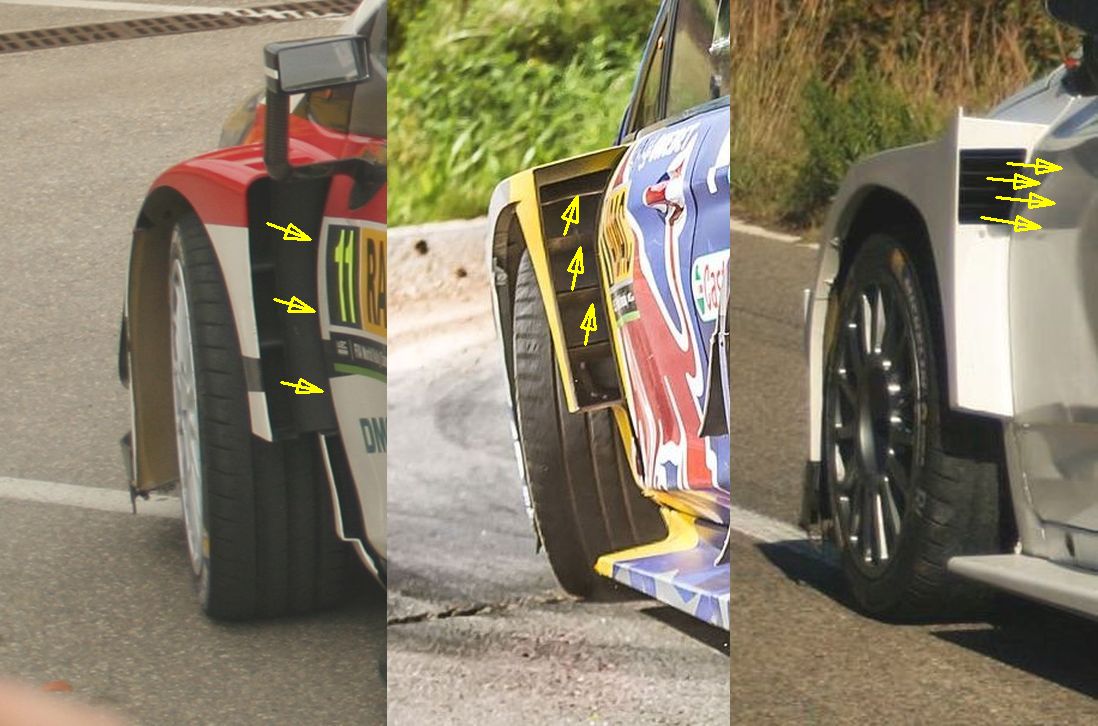 Citroën’s design followed a different approach to that of the other teams. Instead of a rear vent, they chose to include a vent at the top of the fender. The vent included a small lip designed to protect the hot air exiting from the wheel space (in yellow in the picture below) from the external mean airflow (in blue). 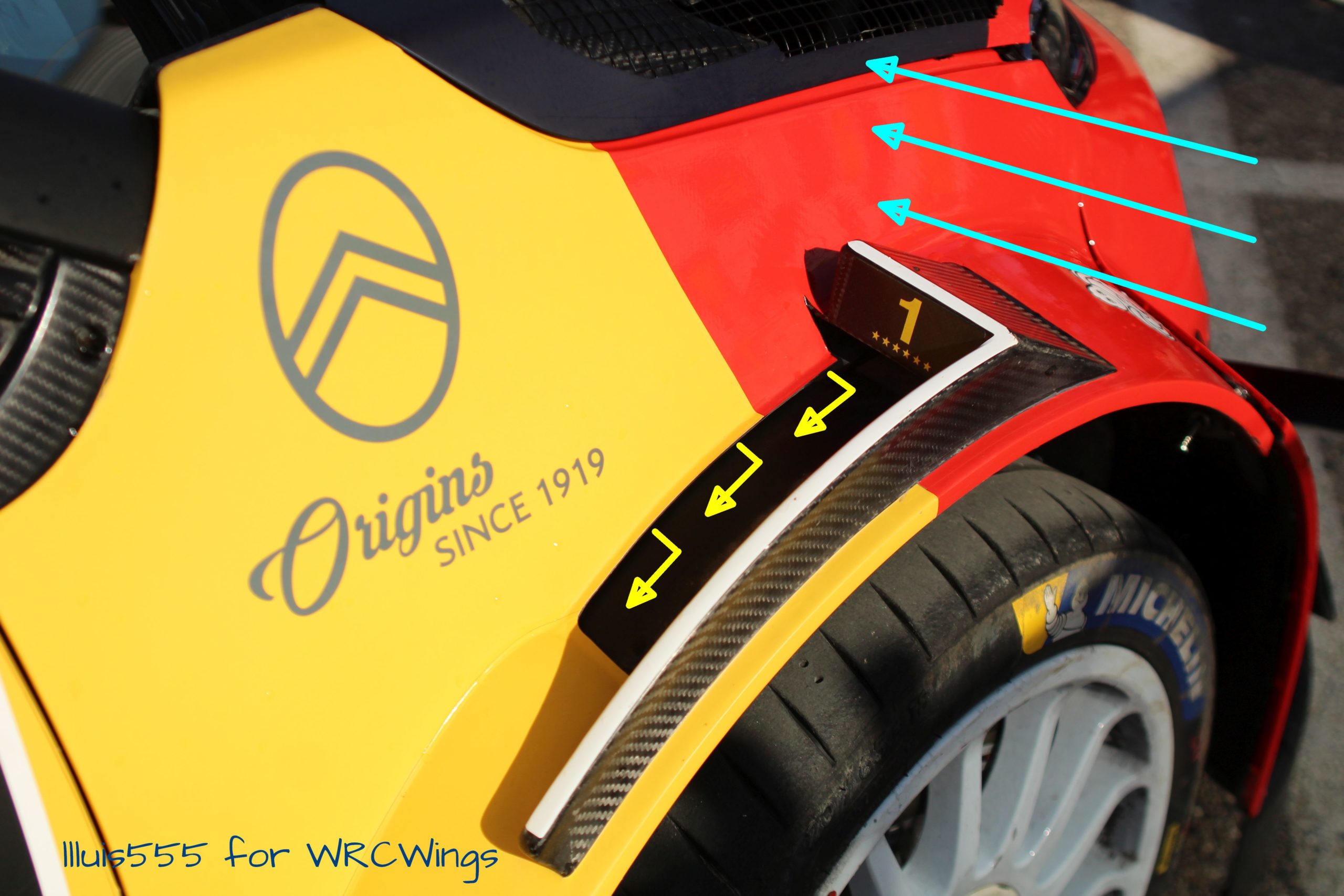 Not surprisingly, all the other teams modified the front fender vent design in the next seasons. Since 2018, Ford adopted an even simpler solution, by removing the small louvers and reducing the vent to a single exit on top of the rear of the fender. 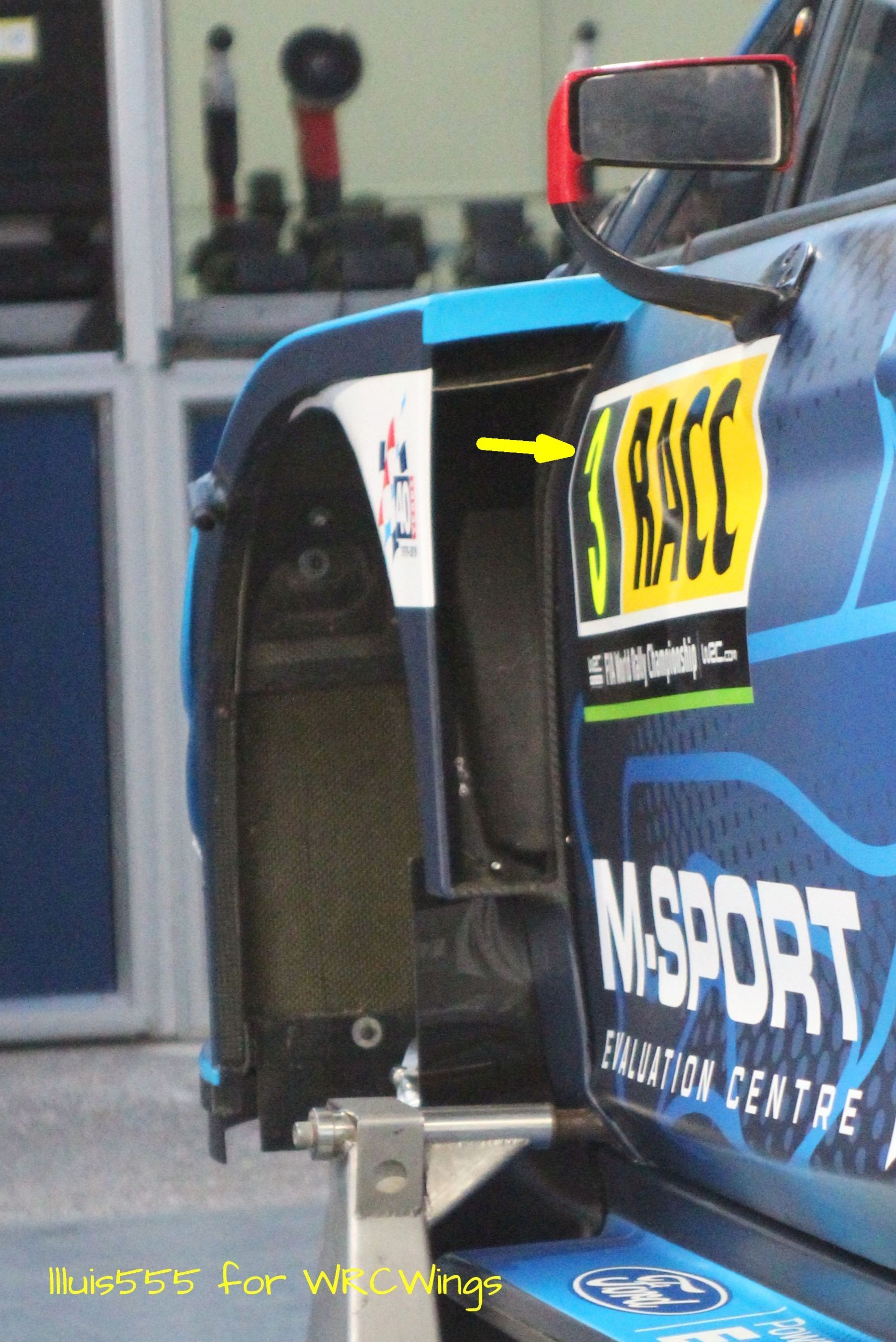 For the 2019 season, Hyundai redesigned the front exit, increasing its size and increasing the separation between the louvers. The result was a better distribution of the airflow on the sides of the car. Lower louvers were designed to send airflow down to the side skirts, which resulted in contributing to pressing them down to generate downforce. 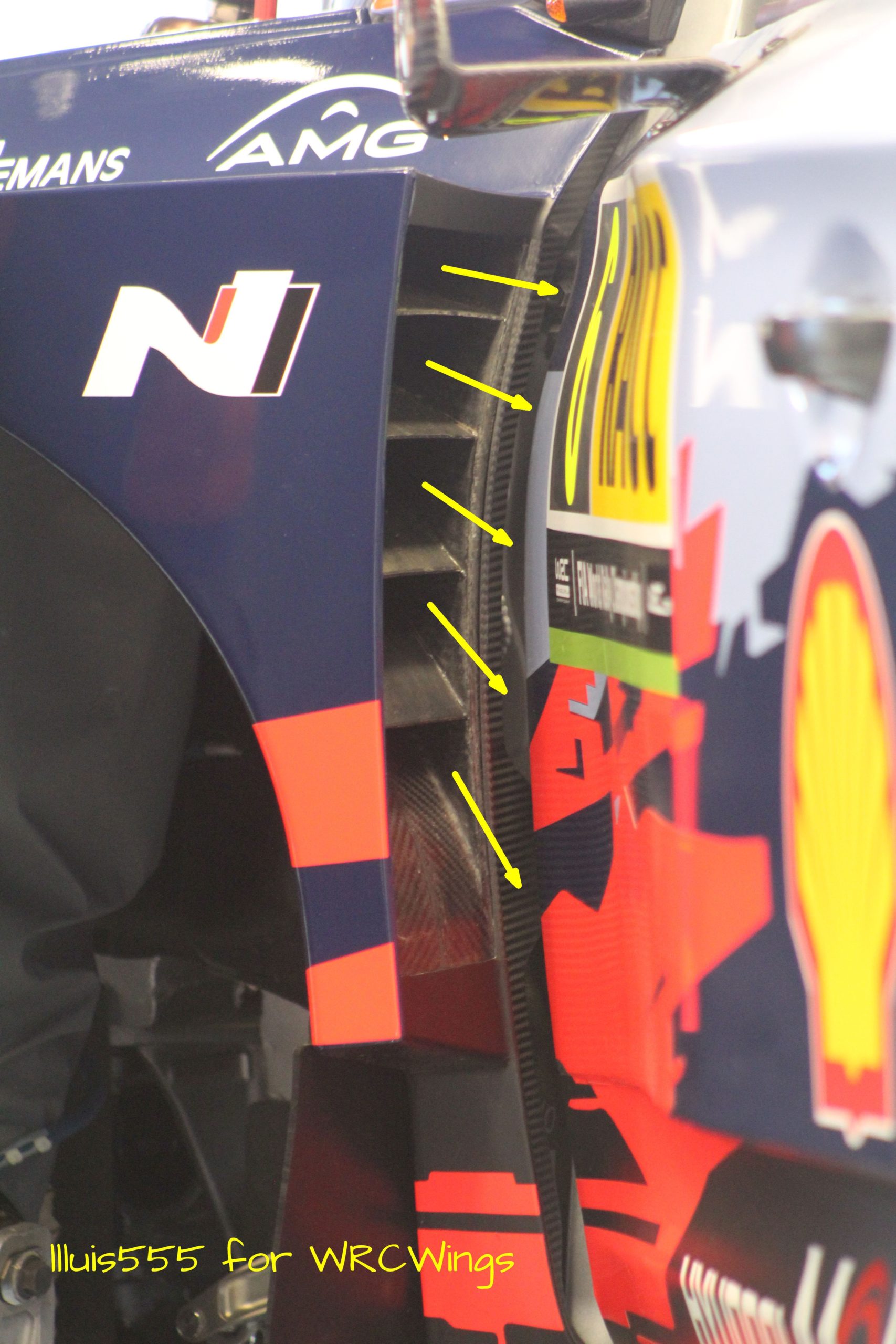 The most innovative design was implemented by Toyota in the interseason before 2018. While all cars used the front fender vents to remove the hot air from brake’s cooling, they decided to use it to also remove hot air from the engine bay. Due to the high area required to remove such a large amount of air, they split the exit into two parts and they extended the vent to the top of the fender: the air coming from the engine bay was removed through the top vent (in red in the picture below as it is hotter), while the air coming from the brakes was removed through the rear vent of the front fender (in yellow). 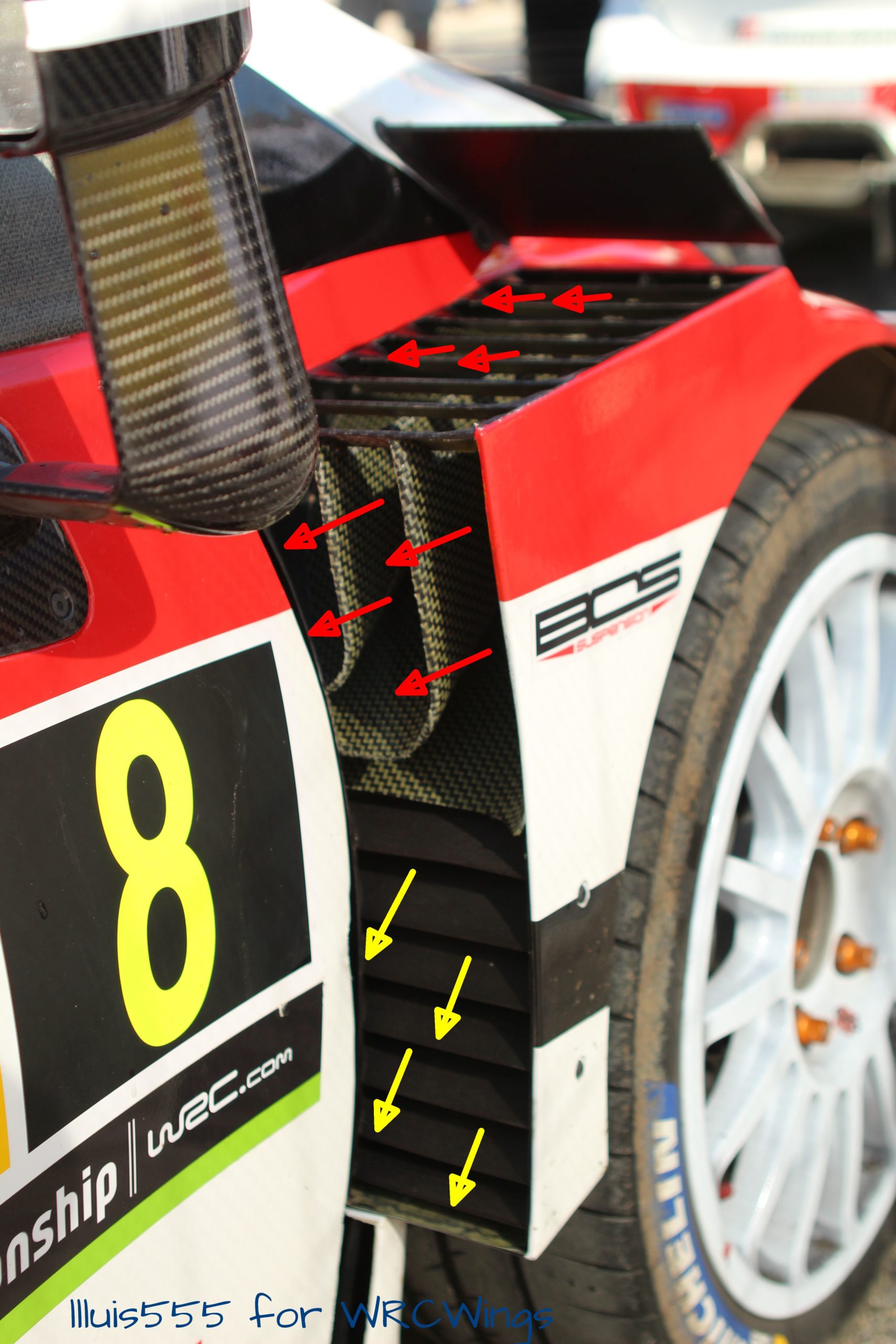 The opening of a vent at the top of the front fender forced Toyota to include a small deflector ahead of the vent, with the same purpose of the lip included in the Citroën: to deviate the main airflow (in blue in the picture below) from the exit, thus generating suction that contributed to the removal of the hot air from the engine bay (in red), while hot air from brakes (in yellow) remained unaffected due to the location of the vent. 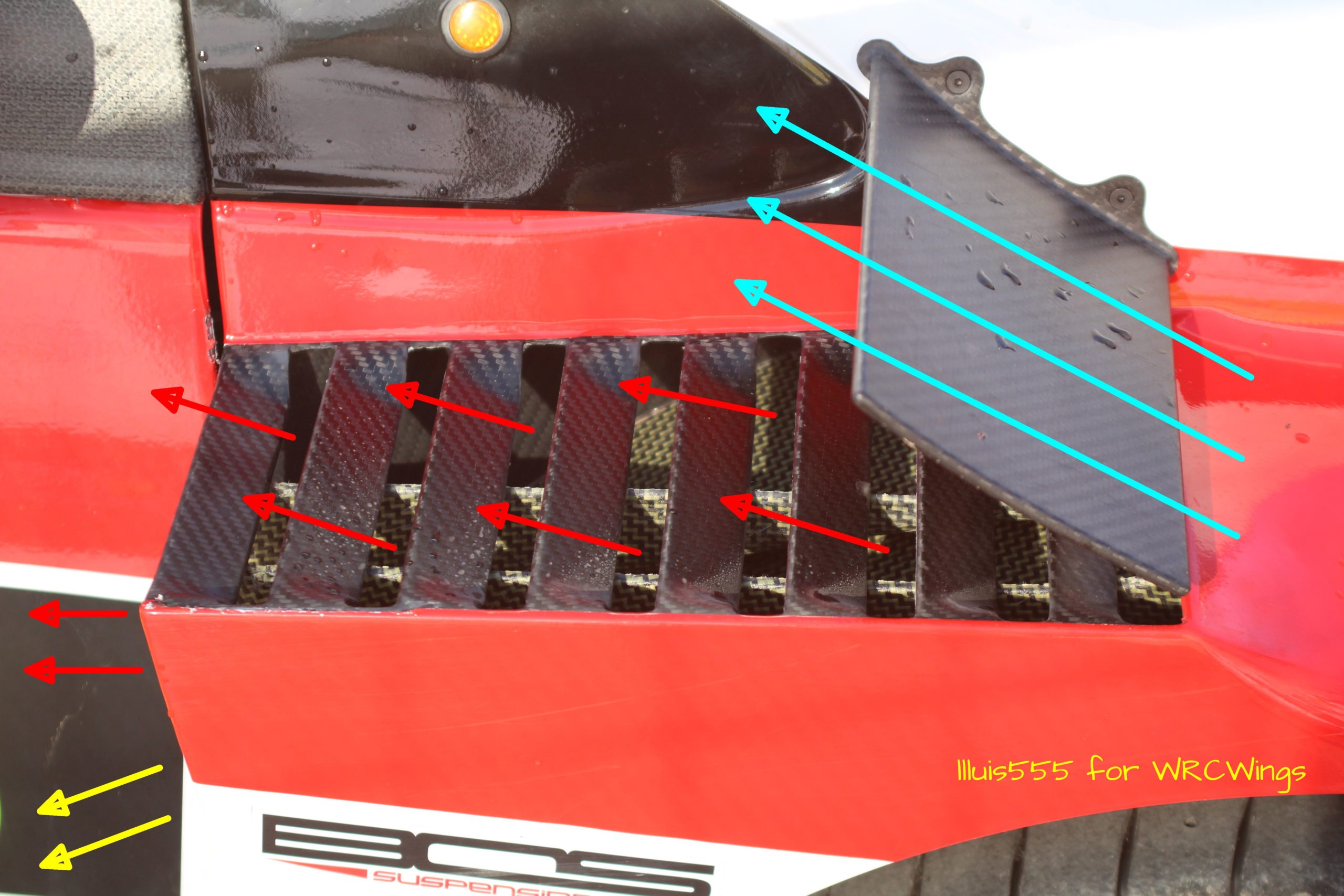 In summary (and even though front fender vents are thin and they are located in a relatively smooth area of the car, limited by the main, external flow above and on the side of the vented airflow), some positives can still be taken from this airflow. In the Fiesta, the air is directed to the rear of the fender where the interaction with the external flow is minimal and the removal of hot air is easier. In the Toyota and Hyundai designs, the airflow is directed just above the side skirt, to get some additional pressure. Or, in the absence of mud flap, the air is dragged by the high-speed front-wheel wake. 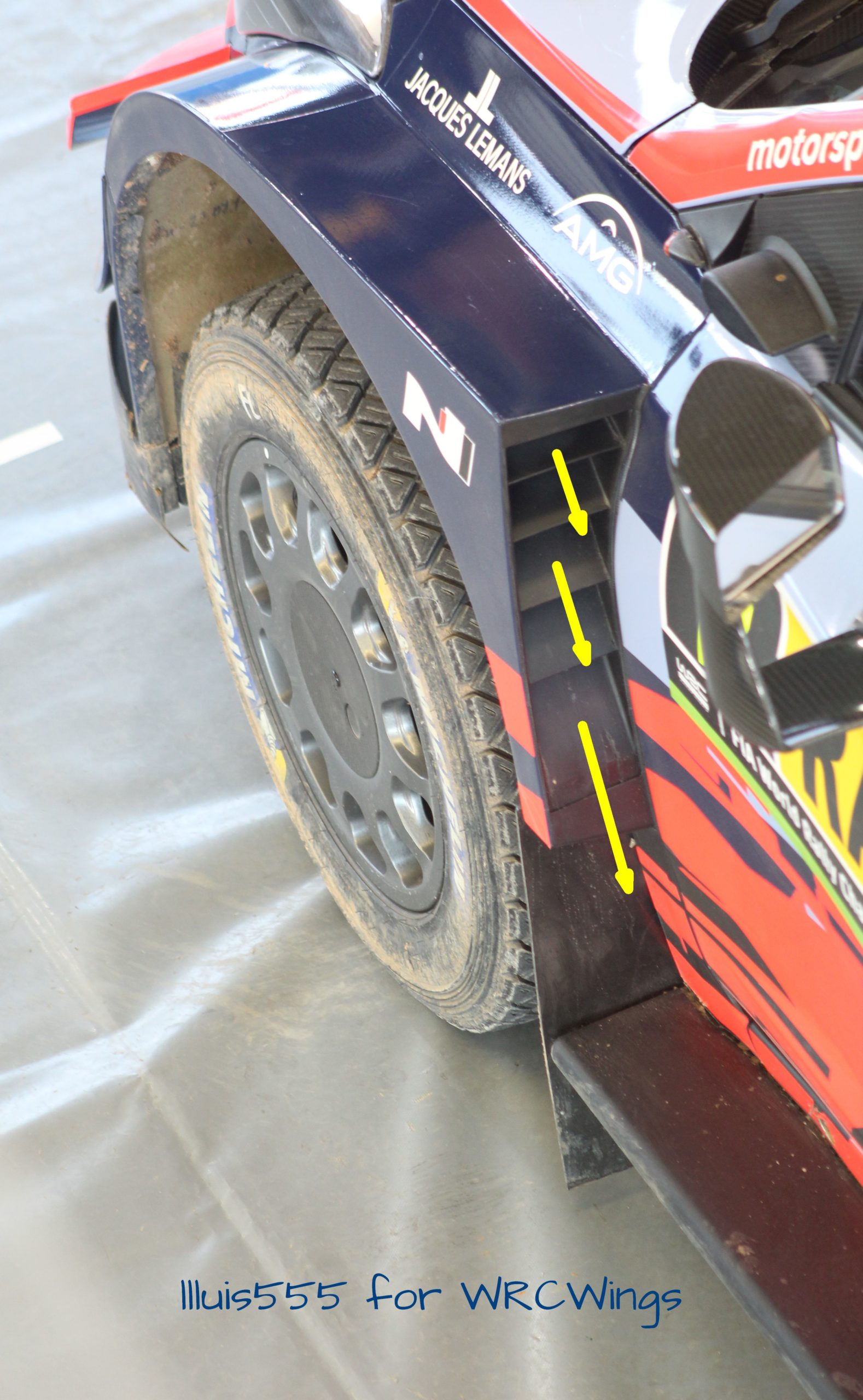 Although cooling requirements are smaller in the rear brakes (due to the lower demand and usage), cooling air still needs to be efficiently removed to avoid pressure increase in the rear of the car. The picture below shows the different designs introduced in 2017 by the four WRC manufacturers.

Citroën again came up with a different solution, with the introduction of a single vent on the top of the rear fender. As with the front fender, a lip was again included to prevent the interaction of the hot air from the wheel space with the external, main flow. The airflow leaving the wheel space was then liberated without any restriction, and there was no intention of redirecting the flow in any direction. Also, an additional vent was positioned behind the wheel, although this exit became blocked in some events (as in the picture below). 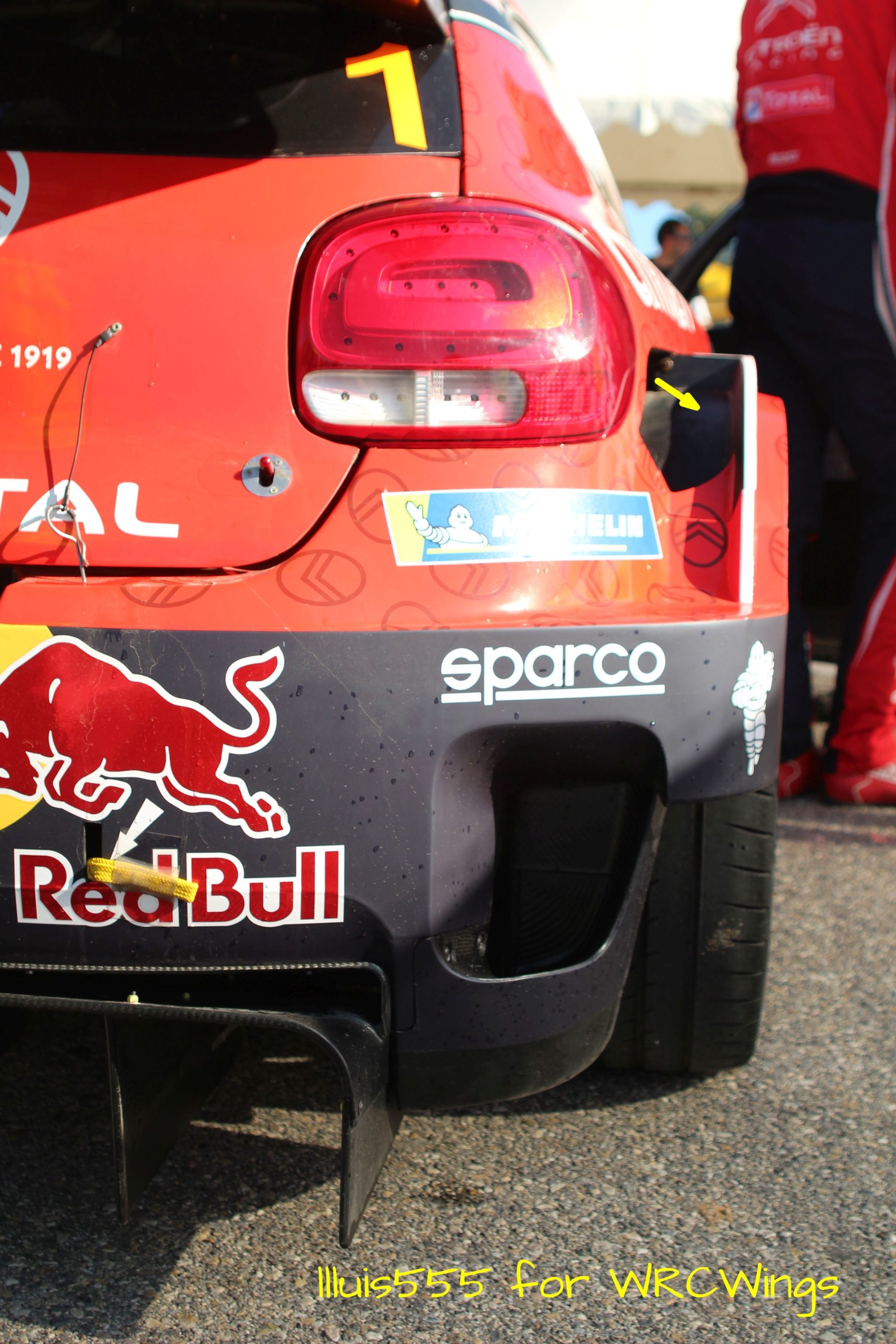 Hyundai redesigned the rear fenders at Wales Rally GB in 2017. The area of the vents and the number and width of louvers were increased. Note that the louvers were repositioned to facing the outside of the car, allowing that part of the air was oriented towards the external side of the car, in interaction with the main, external flow. 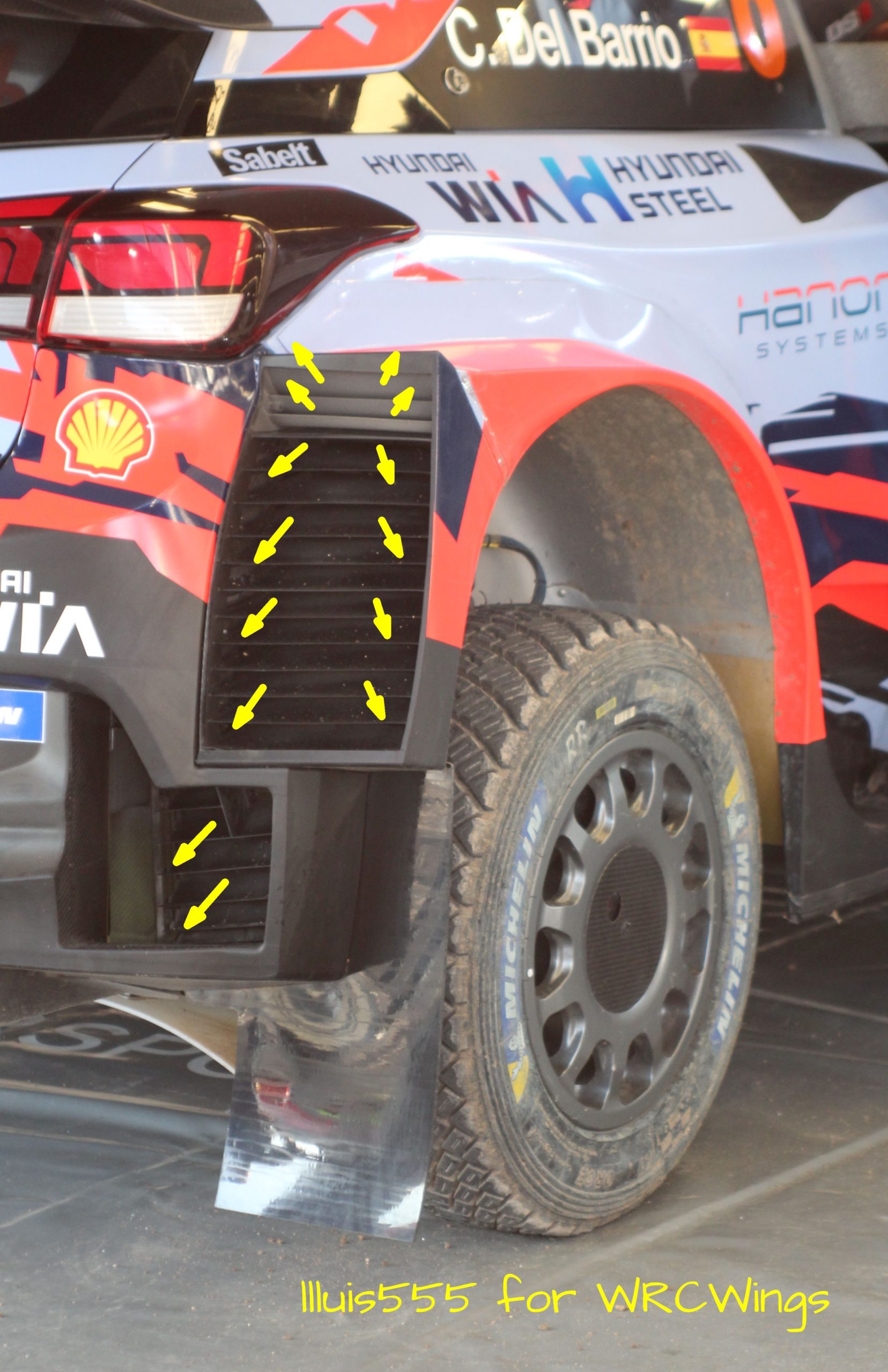 Ford also introduced a new design of the rear fenders’ vent at Rally Finland in 2018. The whole fender was modified: the vent area was increased and flat louvers were included, following Toyota’s proposal. For the start of the 2019 season, the lower, external side of the fender was cut, to allow more effective removal of air from the wheel space. 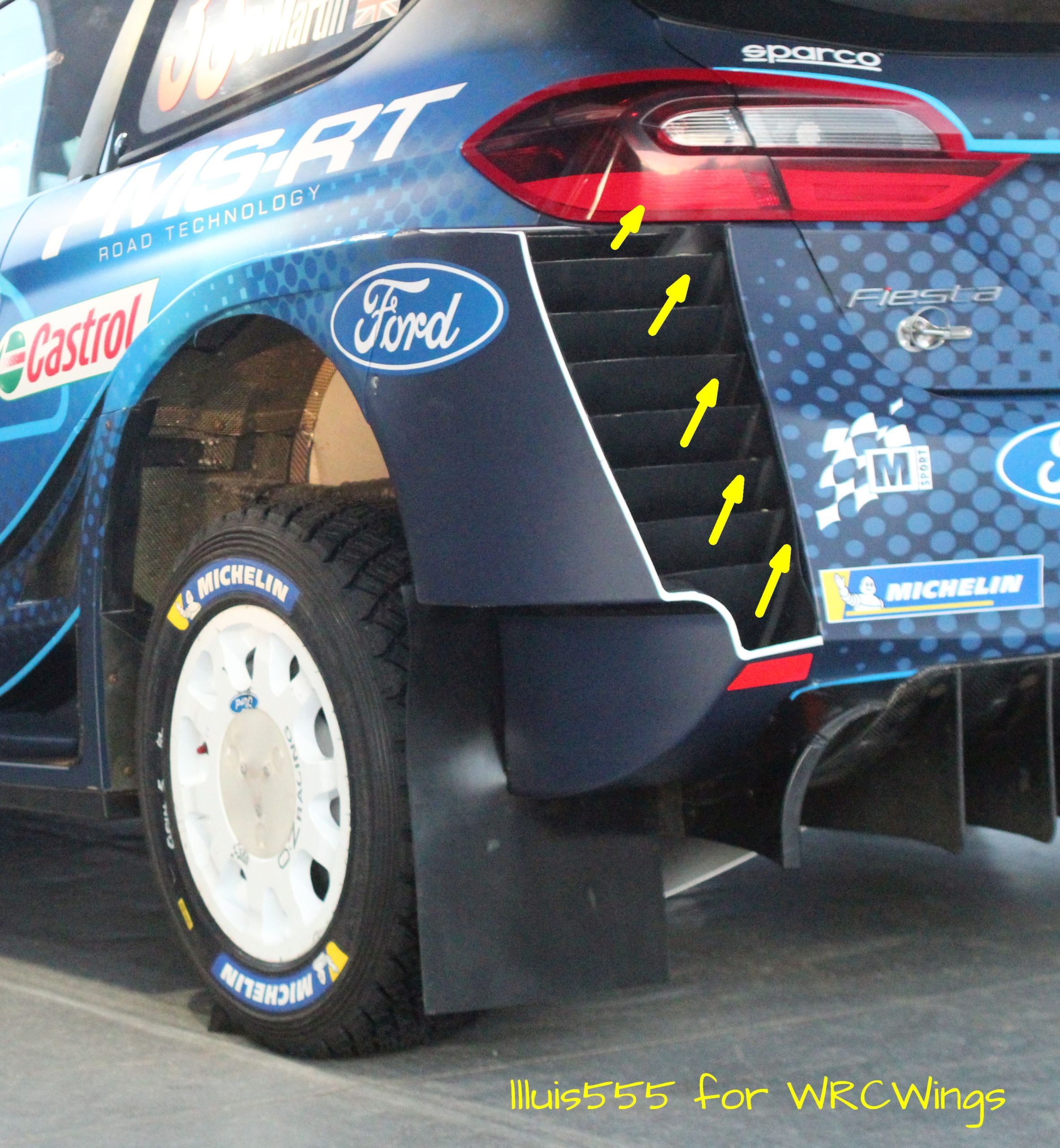 The geometry of the louvers determines the direction of the air when it leaves the fender: in the case of the Fiesta and the Yaris, the air is sent upward. 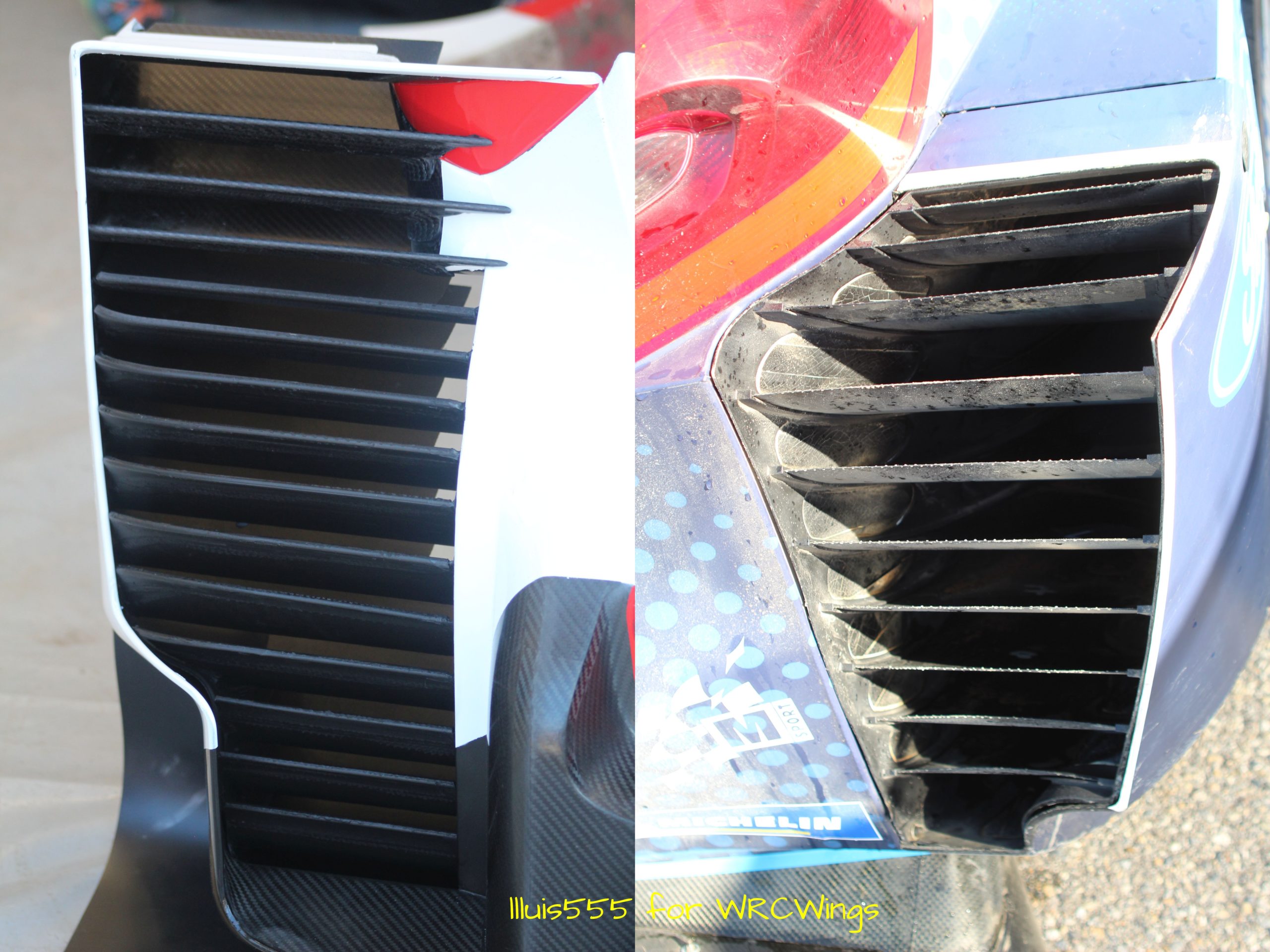 Images from damaged fenders allow us to see their internal geometry, such as in the case of the Toyota in the picture below. The image confirms that mud and snow can easily accumulate inside the vent due to the shape of the louvers. 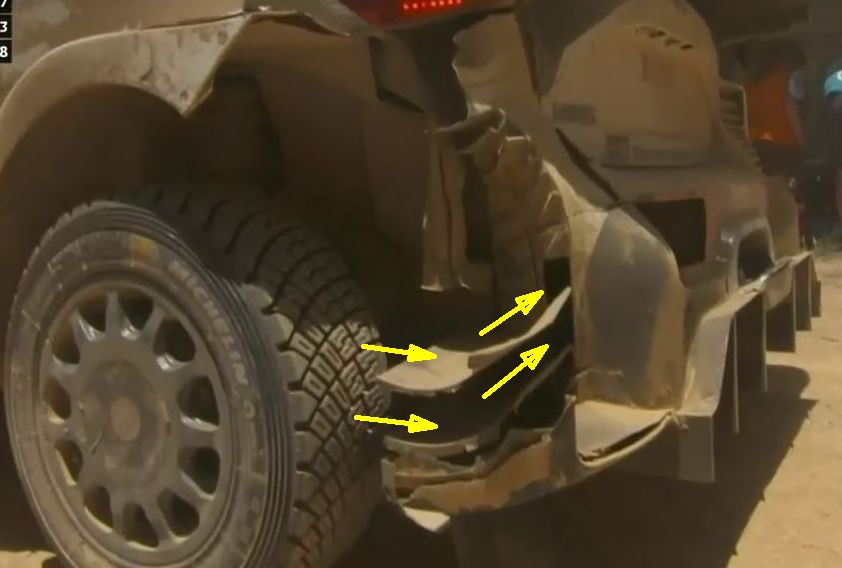 In the case of the Hyundai i20, the air is sent into different directions: upward from the upper louvers, horizontal from the center louvers and downward from the lower louvers. Such heterogeneous distribution allows for better air removal. Also, the image of a damaged Hyundai rear fender shows the internal geometry, where the probability of mud and snow accumulation is smaller than in the Toyota or in the Ford. 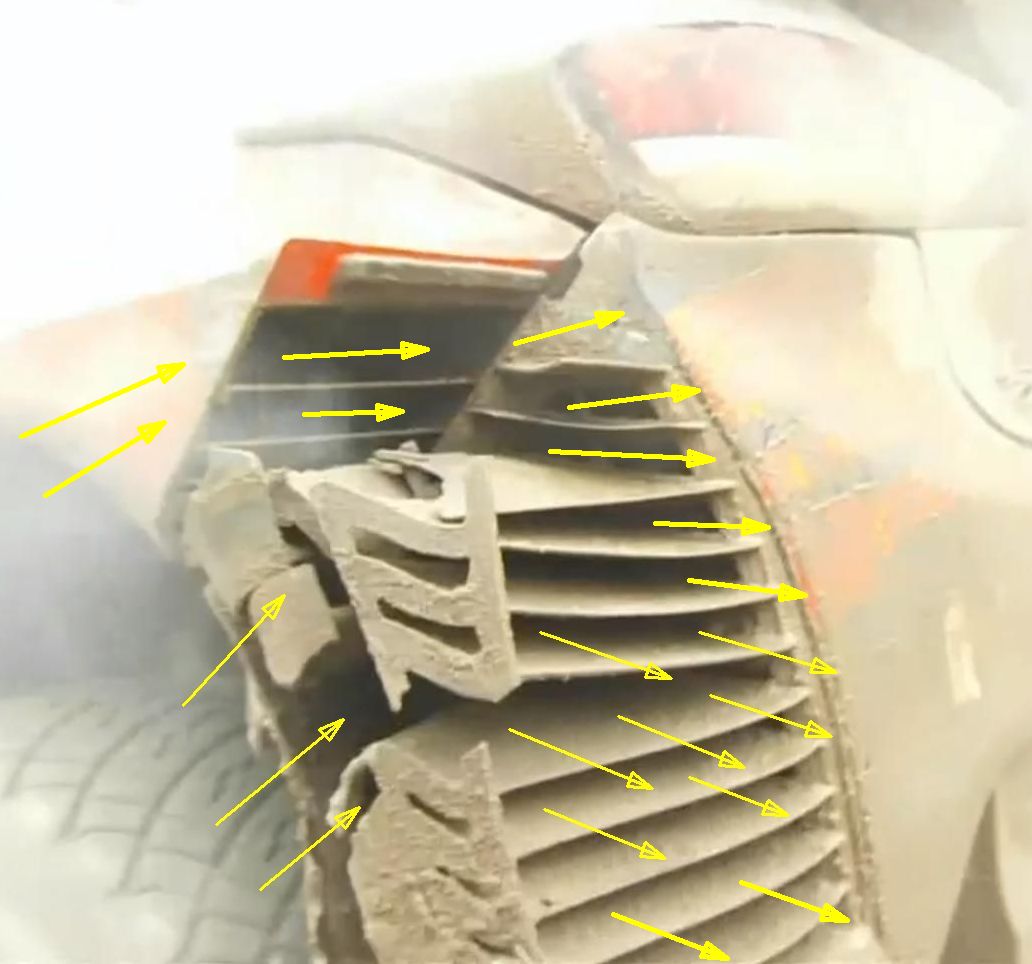 To minimize the risk of blockage of the rear fender vent due to the accumulation of mud or snow, Toyota introduced a simplified design with a drastic reduction in the number of louvers in 2019. Since then, it has been only used sporadically, in Sweden 2019, 2020 or Argentina 2019. 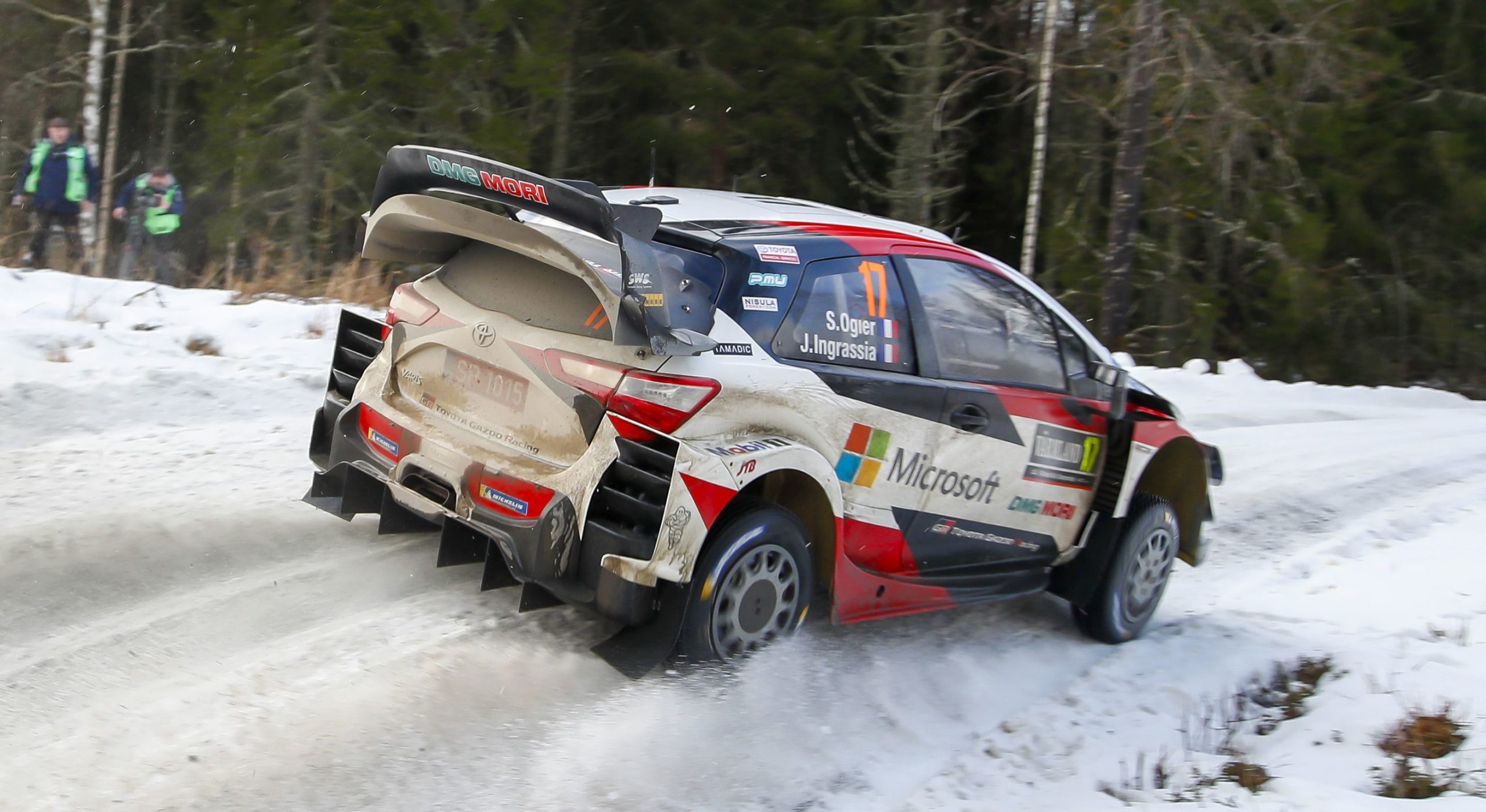 To get the same effect (minimizing the louvers’ blockage), Ford intentionally blocks the lower louvers in some events. The higher airspeed in the remaining louvers allows the removal of any accumulated material, thus the risk of blockage is minimized. 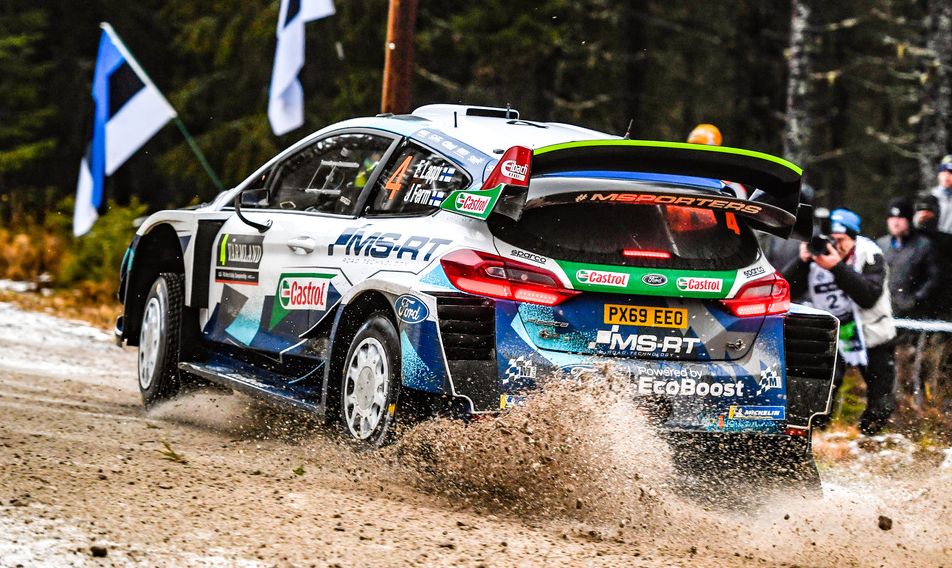 The goal of the louvers is to send the air into the most adequate section of the car’s wake, where three different areas can be identified. 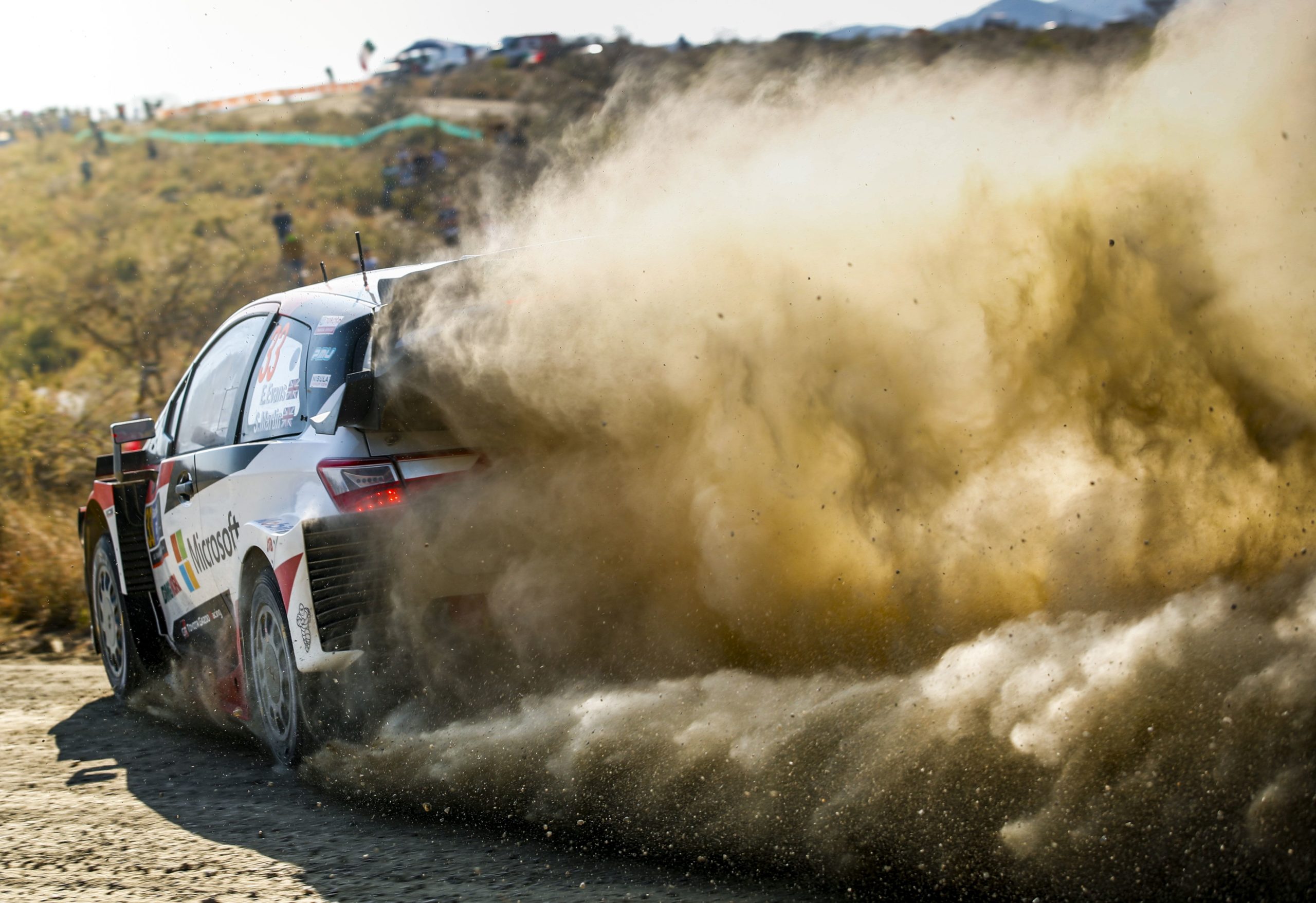 In the image below the three different areas of the wake are delimited with green dotted lines: an upper section originated by the flow over the rear wing, a central section with lower airspeed, and where some recirculation loops can be identified (which generate additional drag), and the lower section (high velocity and turbulence) generated by the rear wheels and the rear diffuser. Forcing the air from the rear fender into the central part of the wake ensures more efficient removal as well as adding some energy to this portion of the wake, contributing in reducing the amount of recirculation in order to reduce drag. 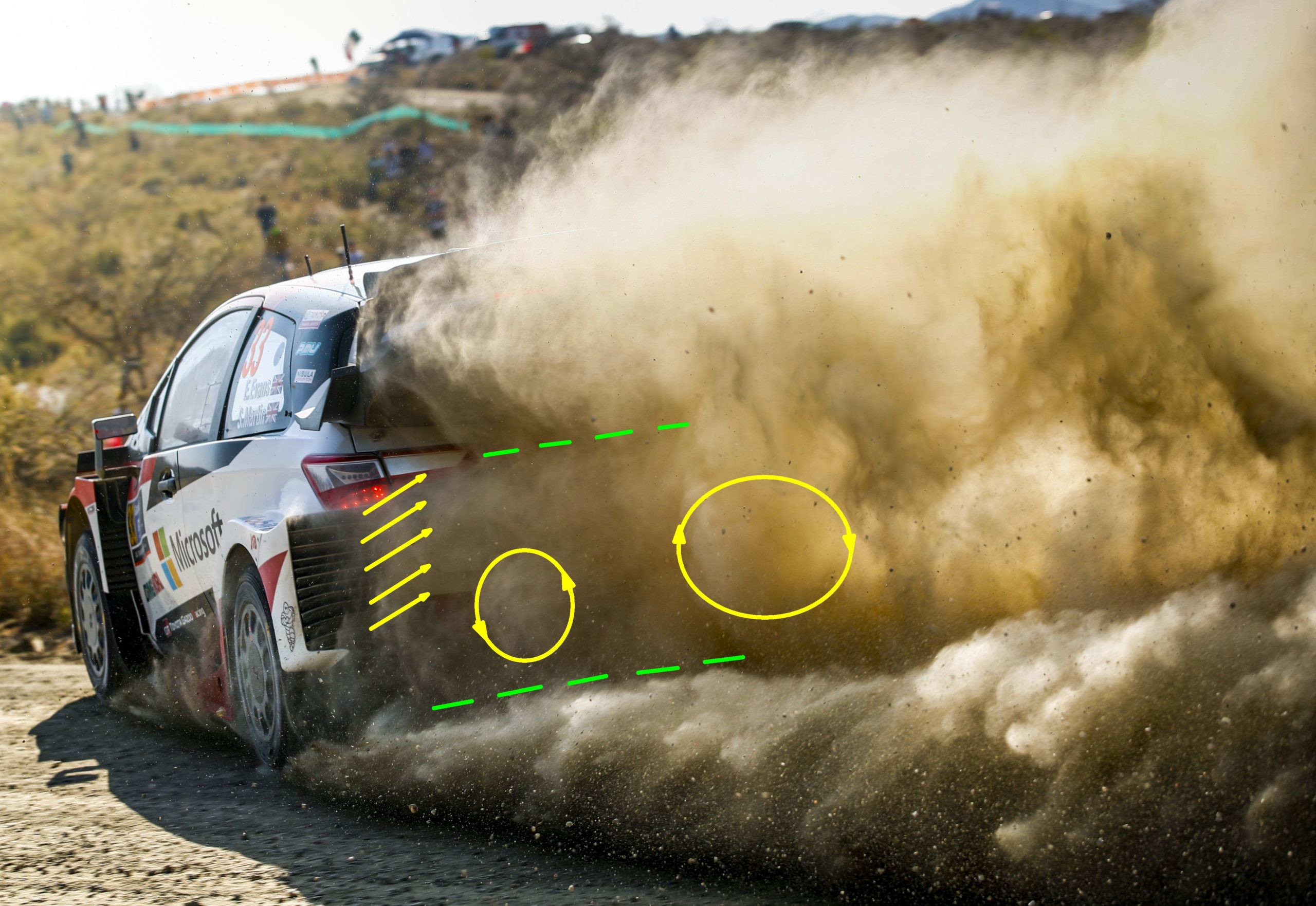 The video contained in this tweet from WRCMotorsport visually confirms where the air is sent from rear fenders vent.

In conclusion, removing the brake’s cooling air is necessary in order to not reduce the aero performance of the WRC cars (to keep downforce generation intact), and the teams have found the way to take advantage of it by improving the aero.