The recent confirmation of the cancellation of the 2020 edition of the iconic Rally Safari means that we will have to wait for another year to see the return of the WRC to the Kenyan roads. To shorten the wait, we aim to review how aerodynamics and cooling were dealt with there by teams in the old days.

As you may probably know, the Rally Safari which was part of the World Rally Championship until 2002 was a unique event. It was run on highly rough roads where reliability was always put under test. Not so often remembered, though, is the fact that it was one of the fastest events every season. It used to include some wide-open stretches through the vast Kenyan plains where cars could go flat out for more than 20 km without any interruption. The result was that very high average speeds were obtained in some of the competitive sections. This was the case of Auriol/Giraudet in 2000 when they drove their Seat Cordoba WRC Evo2 at an average speed of 142,9 km/h at SS1 (Orien 1), a 112 km long stage. Maintaining such a high speed meant that aerodynamics were as important as they could are in Rally Finland. 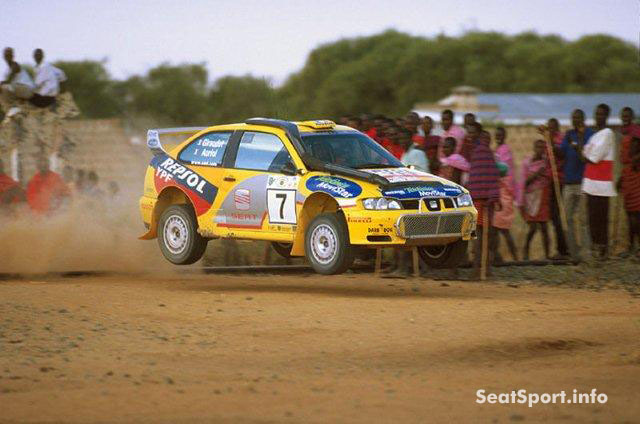 Also, the usual high temperatures in the area favoured the appearance of cooling issues that caused many retirements and time losses. This meant that aerodynamics and cooling were as crucial to obtain a good result as reliability was. It’s worthwhile to take a look at how engineers faced these two topics in the old days, as some of these solution can still be useful today. 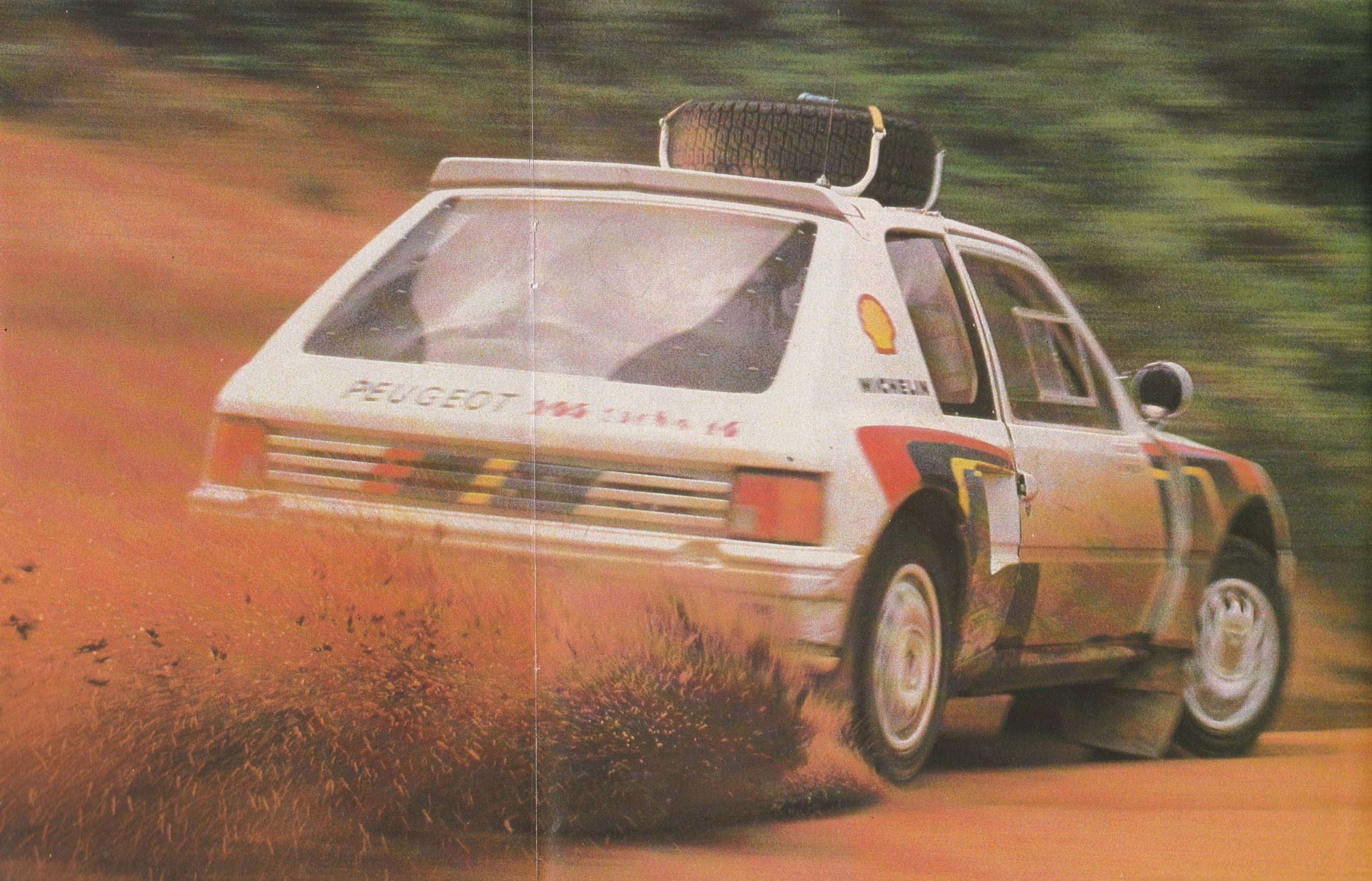 Since its first edition in 1953, the Safari Rally was held on gravel roads almost entirely open to the public, which forced the drivers not only to face potholes and deep ruts, but also open traffic all over the course. With total distances as long as the 4.520 km in the 1991 edition (2.754 km in competitive sections), which could easily include competitive sections over 100 km long, it was the longest, toughest and roughest rally in the Championship. The conditions could be so dry and dusty that organizers often had to extend the gap between competitors to more than three minutes. Add this to the heat and the fact that some stages were developed at very high altitude (around 2.800 meters) and you will have the most difficult test a rally car can face.

And things could go even worse on those occasions when torrential downpours quickly converted the dry roads into a raging torrent within minutes, forcing the drivers to deal with deep water areas and tons of mud. Under these conditions, it’s no surprise that some stages received such scary names as “The road to hell”, as it was known the SS6 Elmenteita – Olenguruone in the 1999 edition. 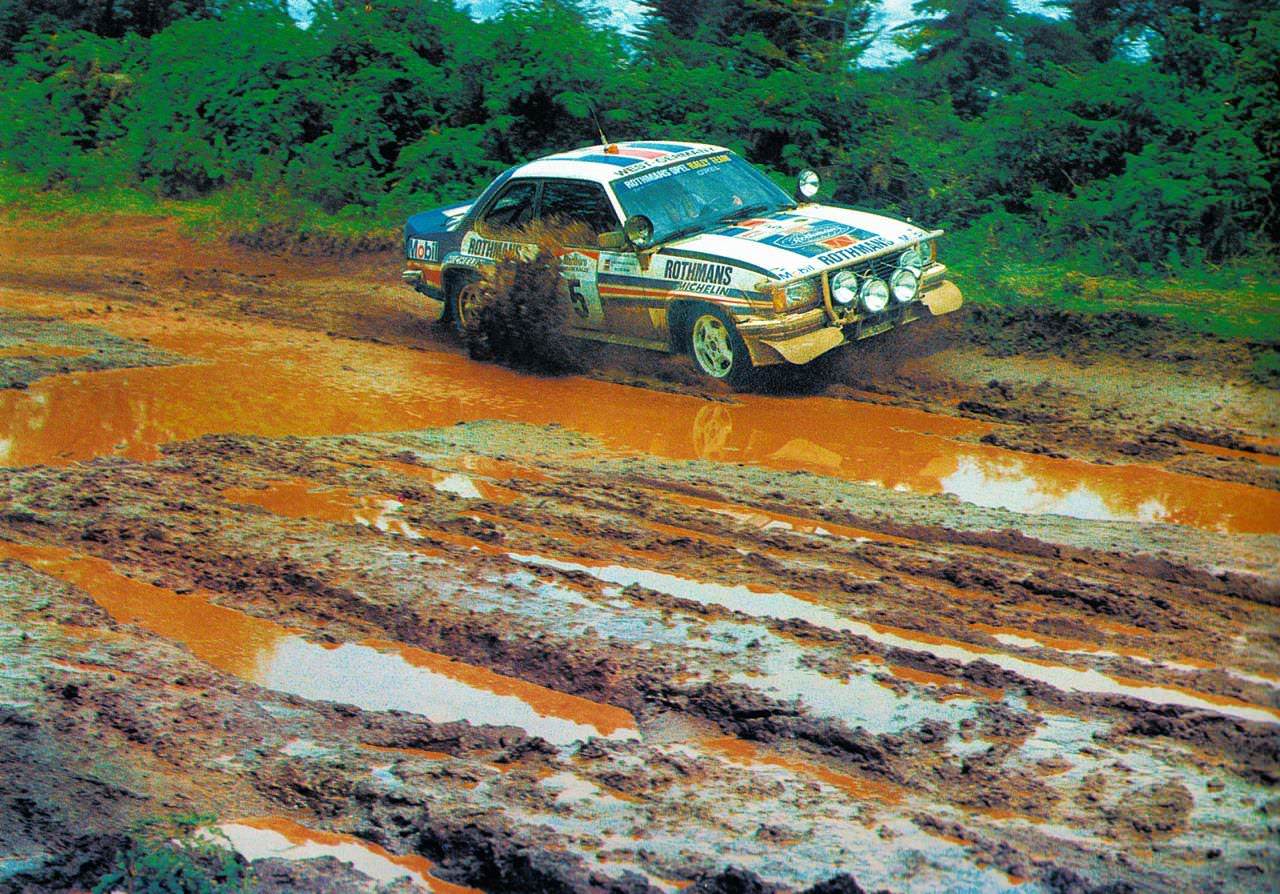 Due to the specificity of the event, the regulations allowed cars to be prepared well beyond the limits applicable to other rounds of the championship. The main goal of the specific preparation was to sensibly increase the car’s reliability, to face the difficult conditions on the Kenyan roads. The result was a significant increase in car weight, different weight distribution and the modification of the external appearance of the car. And all these factors had a significant impact on the aero and cooling performance of the cars. 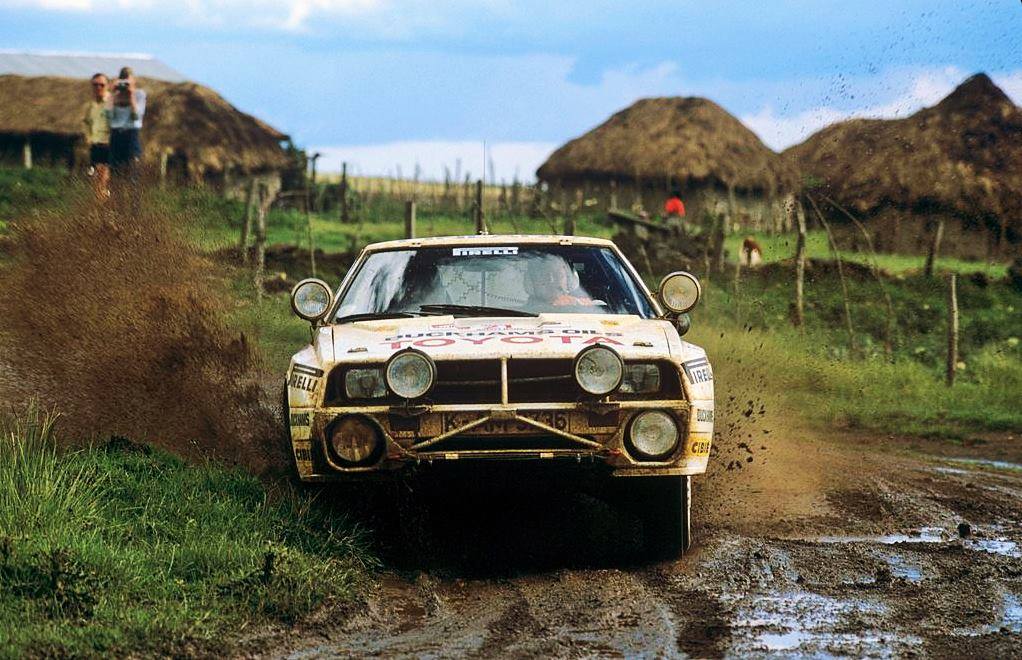 The first main modification that was done was the addition of front, roof and rear bars, in order to protect the car against the impact of animals (for what they were called bull bars or cowcatcher) or from rolling, both very common. The presence of the bars, combined with the light pods (which were used night and day in order that the cars were seen by other cars, spectators and animals) had a clear impact on the aero of the cars. The increase of the front area brought an increase in air resistance. To minimize this impact, Ford designed a protection system to be included inside the front bumper for the 2001 edition. The result was that the external image of the Focus RS car did not show any sign of the distinctive bars, and the air resistance was reduced. 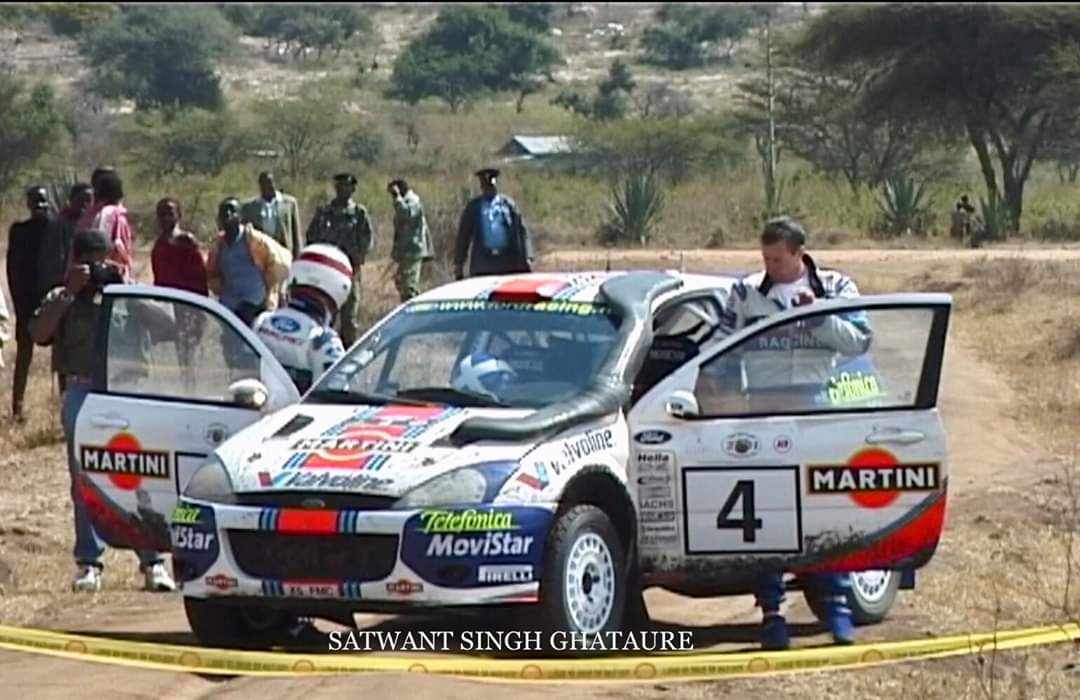 The presence of the bars and light pods also had an impact on the cooling capacity of the cars, as they limited the amount of air entering into the engine bay. The first attempt to reduce this impact was the use of smaller lamps, which started to be implemented in the late 80s by Lancia. Also, the size (capacity) of the radiators was increased for this event. 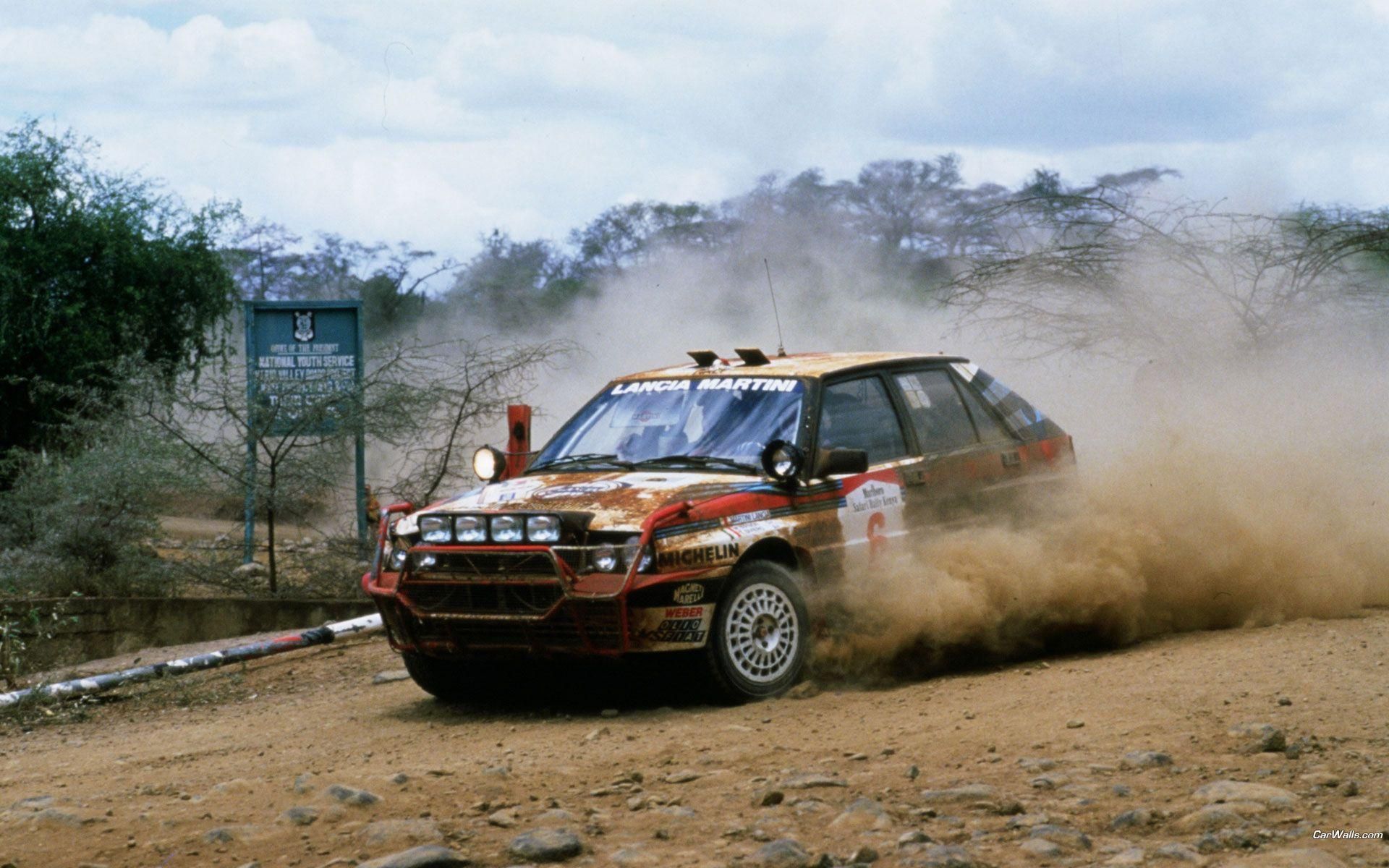 It was also usual to add a couple of orientable extra lamps on the top of the bonnet, so they could point them at the sides of the car when required. As with the bars and the front lights, this caused an increase of the frontal area of the car, resulting in a higher resistance to air, which was detrimental at the fast sections. To reduce the front surface, Subaru included the lamps in the rear part of the side mirrors of the Impreza since 1997. 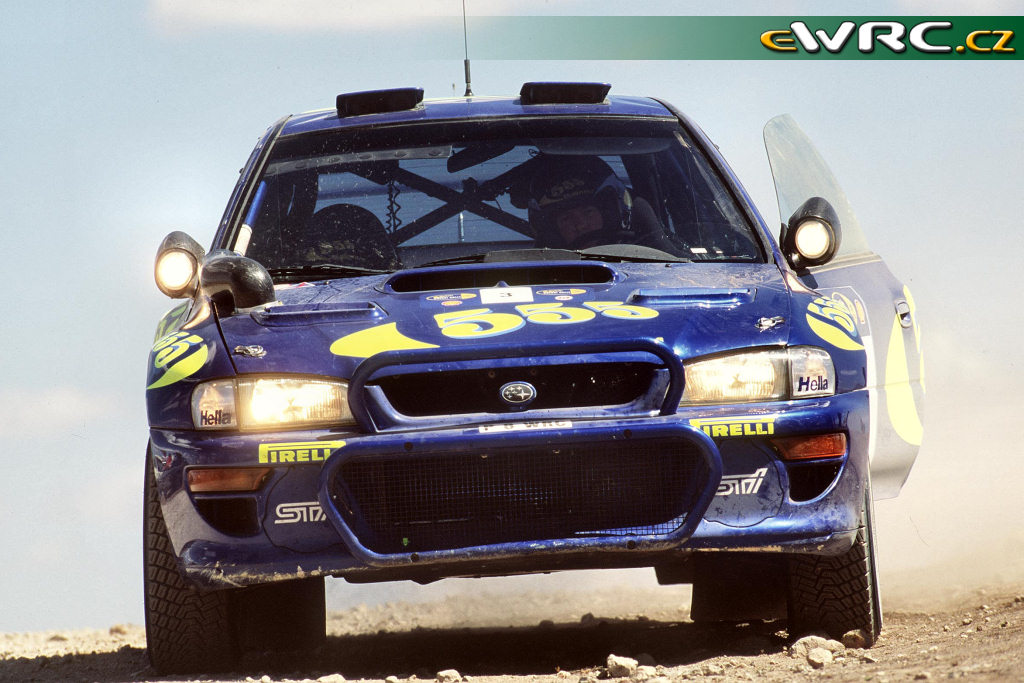 The front area was also significantly increased by the placement of a spare wheel on top of the roof. The high frequency of punctures forced the teams to include two spare wheels, and cars like the Lancia Stratos, the Lancia 037 Rally or the Peugeot 205 Turbo 16 relocated one of them over the roof, due to the lack of space available inside. 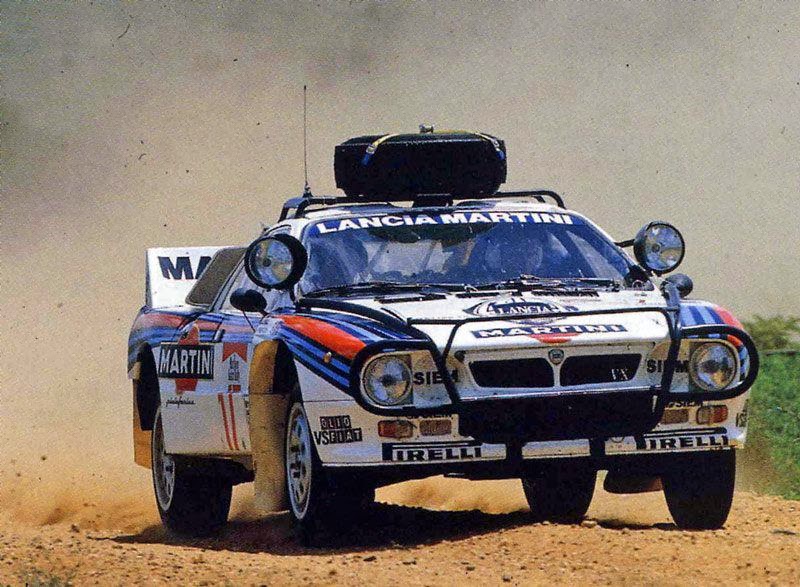 But the consequences, in terms of reduction of top speed due to higher front surface, forced the teams to find better places to keep the spare parts, and this solution has not been used any more since the mid80s.

The cooling of the car’s interior was also a topic that engineers had to deal with at the Safari Rally. Fresh air, free of dust was required in order to cool down the interior of the car, due to the high ambient temperatures. It was quite to modify the roof scoops to prevent dust from entering inside the car. Subaru even removed them from the Impreza WRC in 2002, as a more efficient internal air cooling system was implemented.

Another solution was to completely mirror the side and rear windows, in order to reflect the Kenyan sunlight to keep the car as cool as possible. Subaru also used this solution in the Imprezas participating in the 2002 edition. 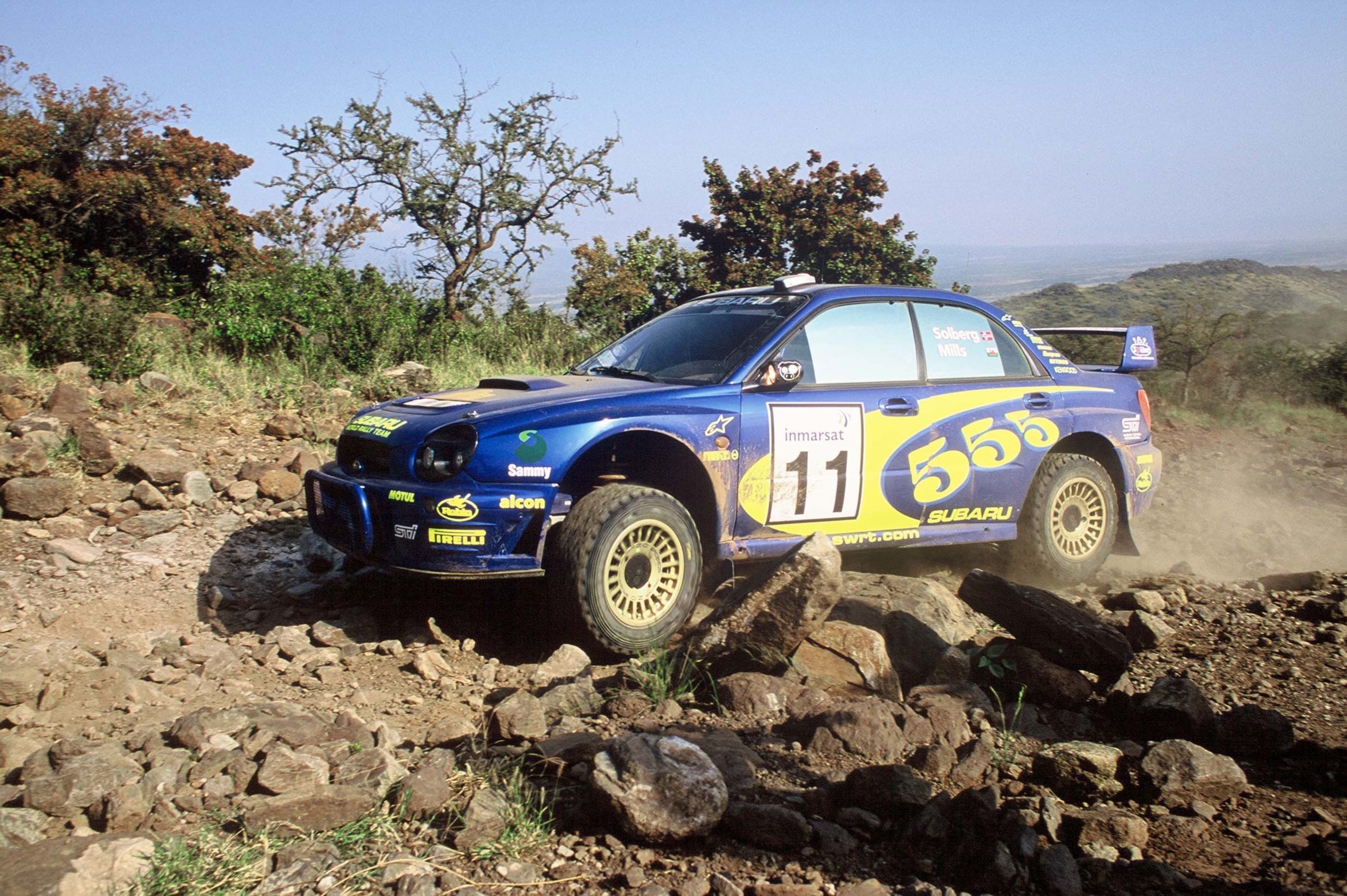 Also, the use of water-cooled racing suits was tested by Ford in the 1996 edition, following the proposal of Carlos Sainz, and as a test for the hot Rally Indonesia, to be celebrated some months later for the first time in the Championship.

Crossing water splashes, fords and even torrents could damage the engine by water entry. To avoid this, it was very common to use snorkels, consisting of a pipe from the engine air feed up to the windscreen pillar (on one side) to roof level, that allowed air to reach the engine if the car was flooded in water. The specific regulations of the event allowed teams to make a hole, of maximum 10cm diameter, in the engine bonnet only, in order to connect the snorkel there. 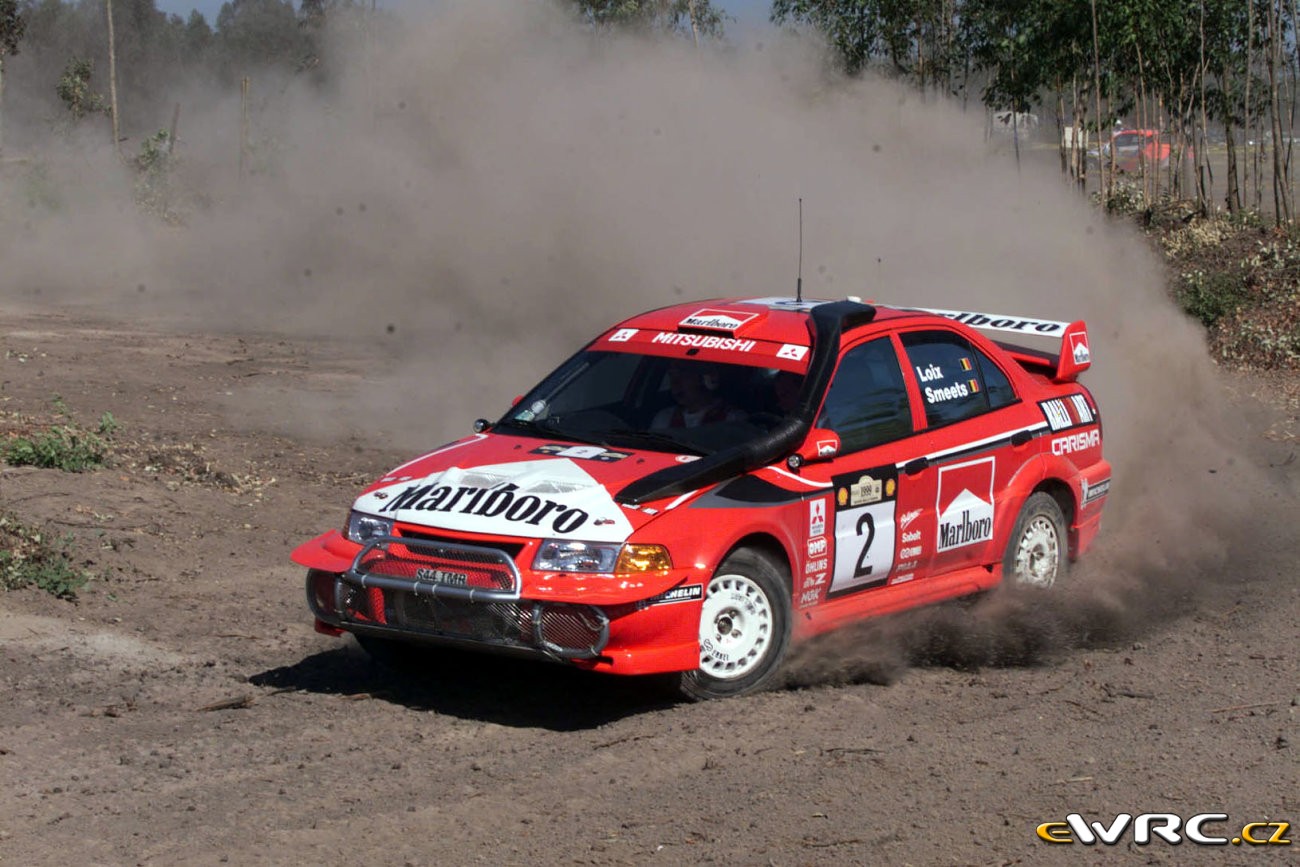 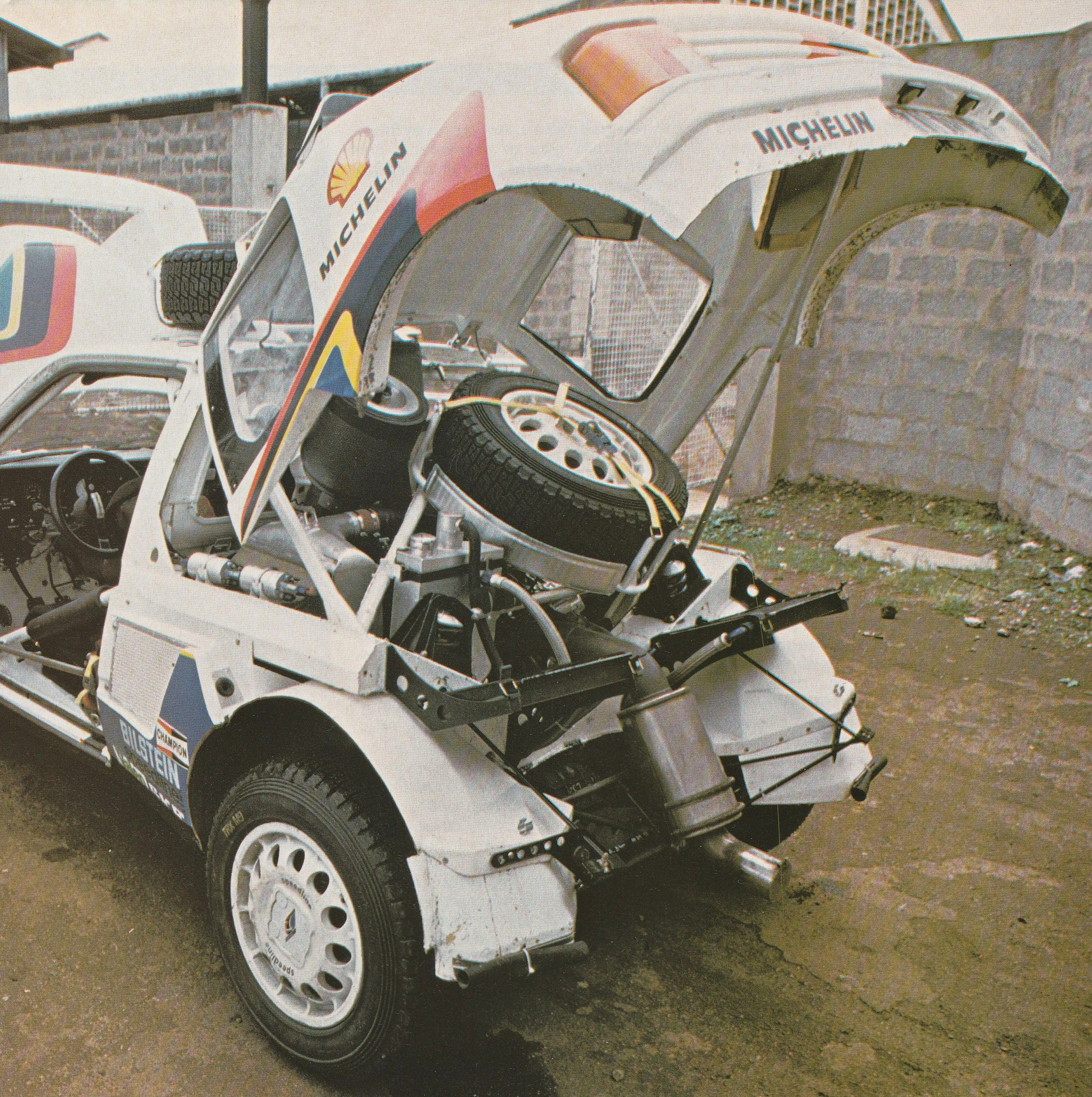 Not only the water was a problem in the engine, also plants, insects or the mud could also be really dangerous. Radiators and engine parts included extra protection against all of them. The mud had the risk of generating a coating around the engine and accessories, which, with the high temperature could harden, thus preventing heat from being removed and finally causing a terminal damage to the engine. This is what caused the retirement of Biasion/Siviero in their Lancia Delta Integrale in 1990. 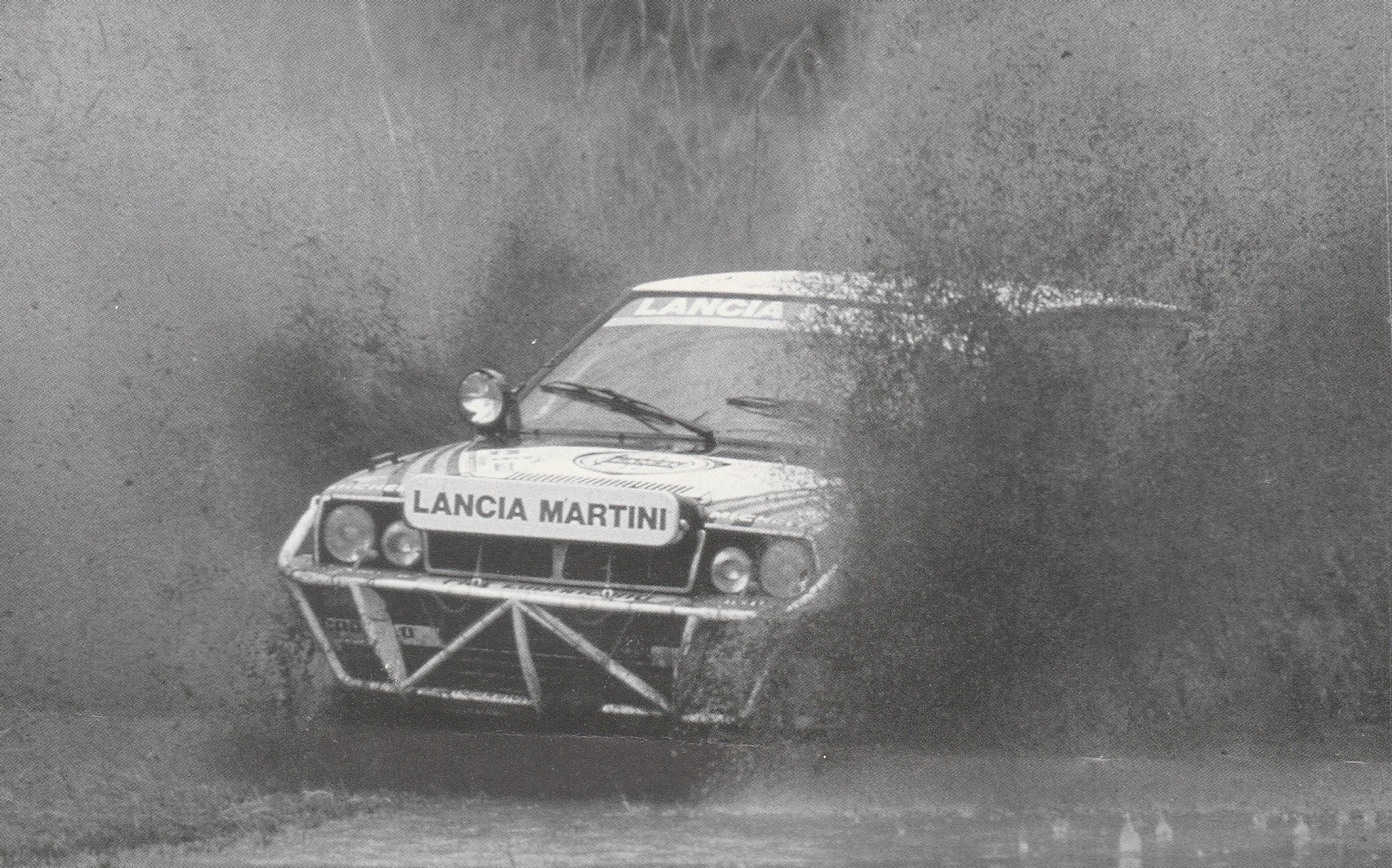 Driving in such rough terrains required increasing the ride height of the cars, to avoid damages caused by rocks and potholes. An increase of 20 mm in the ride height was common, and the consequence was again an increase of the air resistance (lower top speed), as well as an increase of the lift generated by the higher amount of air flowing under the car (more air means that it flows slower, and pressure increases under the car), resulting in a lower grip. 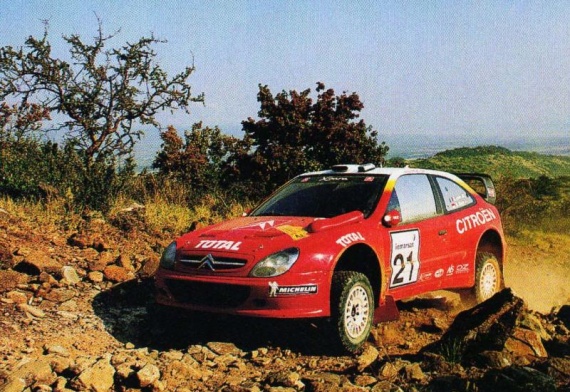 The suspension travel was also increased (up to 60mm in the case of the Ford Focus RS in 2001) which meant that the ride height was constantly changing, thus allowing higher lift generation due to the entrance of more air under the car (more pressure), as well as poorer car balance, which always has an adverse effect on aerodynamics. 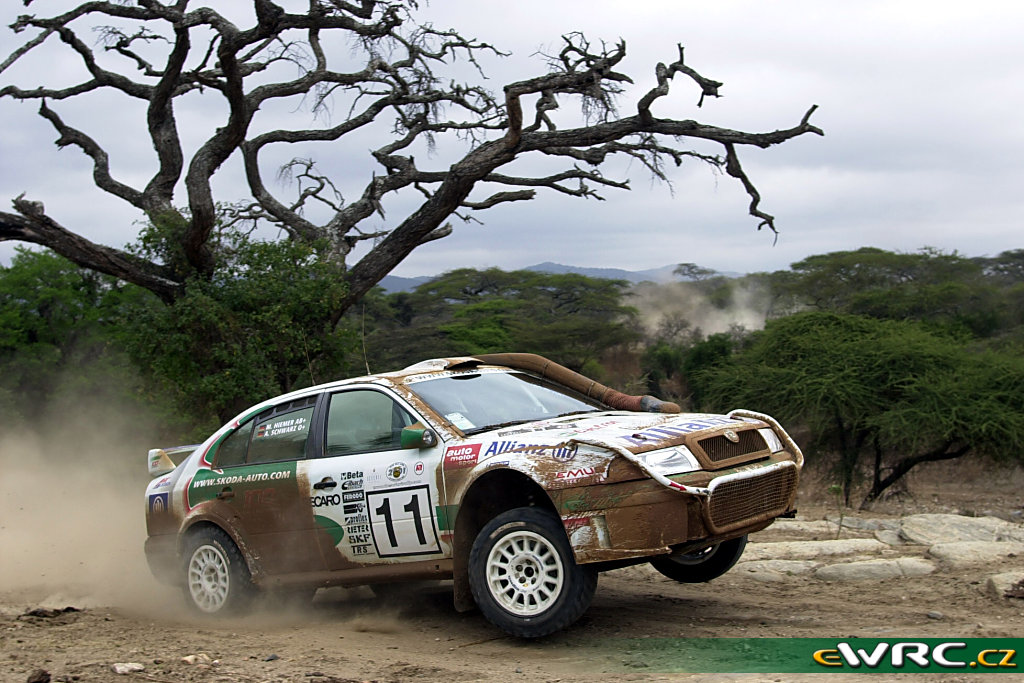 The long-distance to be driven every day required to increase the fuel capacity of the cars and additional fuel tanks were usually included, raising the total capacity up to 170 litres. Adding extra tanks inside the car was meant to modify the weight distribution, as well as relocating some parts, like spare wheels. In the Peugeot 205 Turbo 16 which took part in the 1985 edition, one wheel was placed on top of the roof and the second one on top of the engine, under the engine cover. Possibly not the best alternative, in terms of aero and cooling.

To make them more robust, the cars needed to be reinforced at multiple points, from engine mounting to suspension. The extra reinforcing, as well as the addition of the parts listed above raised the total weight of the cars by more than 135 kg (dry) in the case of the Peugeot 205 T16 in 1985 or 150 kg in the case of the Lancia Delta Integrale in 1990 or the Mitsubishi Lancer Evo III in 1996. 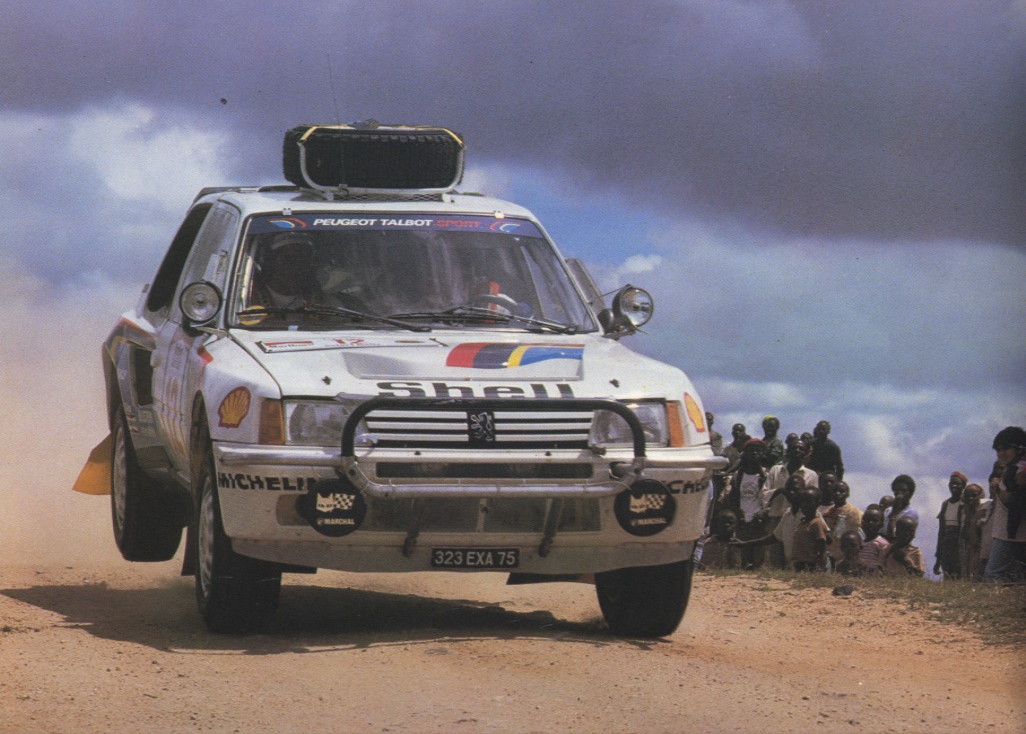 The gearboxes were also modified, in order to allow higher gearing, to reach higher than usual top speeds: up to 215 km/h with the Lancia Delta Integrale in 1990, 220 km/h with the Mitsubishi Lancer Evo III in 1996 or 230 km/h with the Peugeot 205 Turbo 16 in 1985… in spite of all the drag-generation modifications already described.

All these changes had a significant impact on the car’s behaviour: longer brake distances, modified handling due to different weight distribution, lower top speed and poorer grip. But it was the price to pay in order to ensure the cars were able to face all the difficulties of the route and safely reach the finish line.

David Lapworth, Subaru Team Principal in 2001, explained very well what the car had to be like: “For a car to be competitive in Kenya it needs to be fast, tough and reliable, but the key to making it a rally winner is to find the ideal mix of those three components. A car that has been built purely to be quick may prove too fragile, while on the other hand, building it like a tank would affect the speed and handling.”