The activity in the World Rally Championship is slowly returning to normality. After the Rally Estonia pre-event tests developed in the last weeks, it was time to allow the drivers to get in contact with the Estonian routes in competition mode. With this purpose, almost all WRC contenders took part in the Lõuna-Eesti Ralli. At the same time, M-Sport organized a really interesting initiative to foster the return to competition in the UK, once the British Rally Championship was suspended after Wales Rally GB’s cancellation. Under the name of M-Sport Return to Stages Rally, it reunited M-Sport’s models from all eras, including the latest spec of the Fiesta WRC with the latest aero modifications. This is a review of all the aero issues involved in these two events. 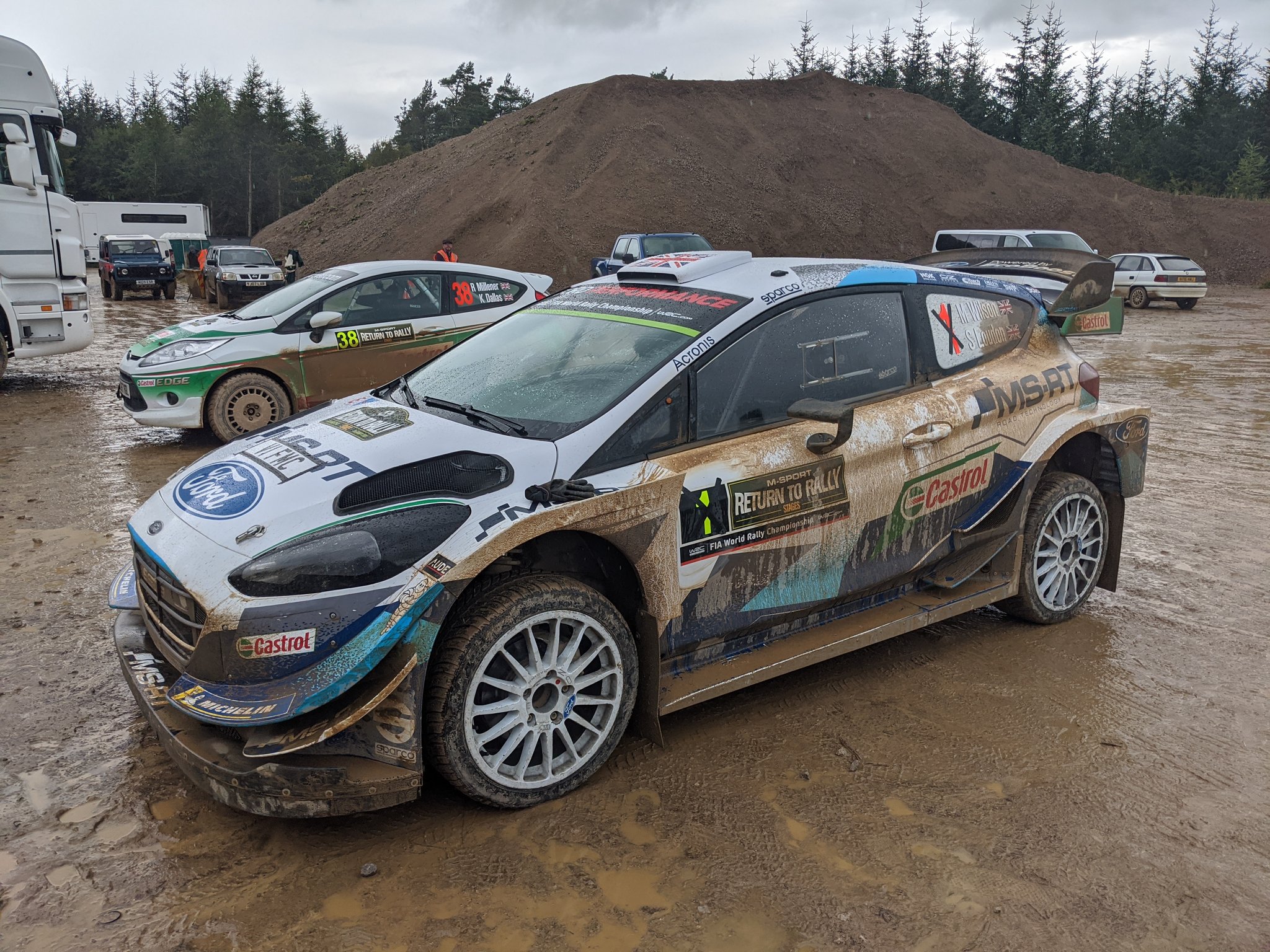 The event took place in the team’s permanent test site, located at Greystoke. In the absence of the official driver’s duos, test driver Matthew James Wilson and Stuart Loudon were designed to drive the latest spec of the Fiesta WRC. The car included the latest aero modifications already seen in the car in the tests developed by the same duo in Greystoke last July, such as the addition of small endplates on the external side of the dive planes (also known as canards) we already evaluated in a previous article. 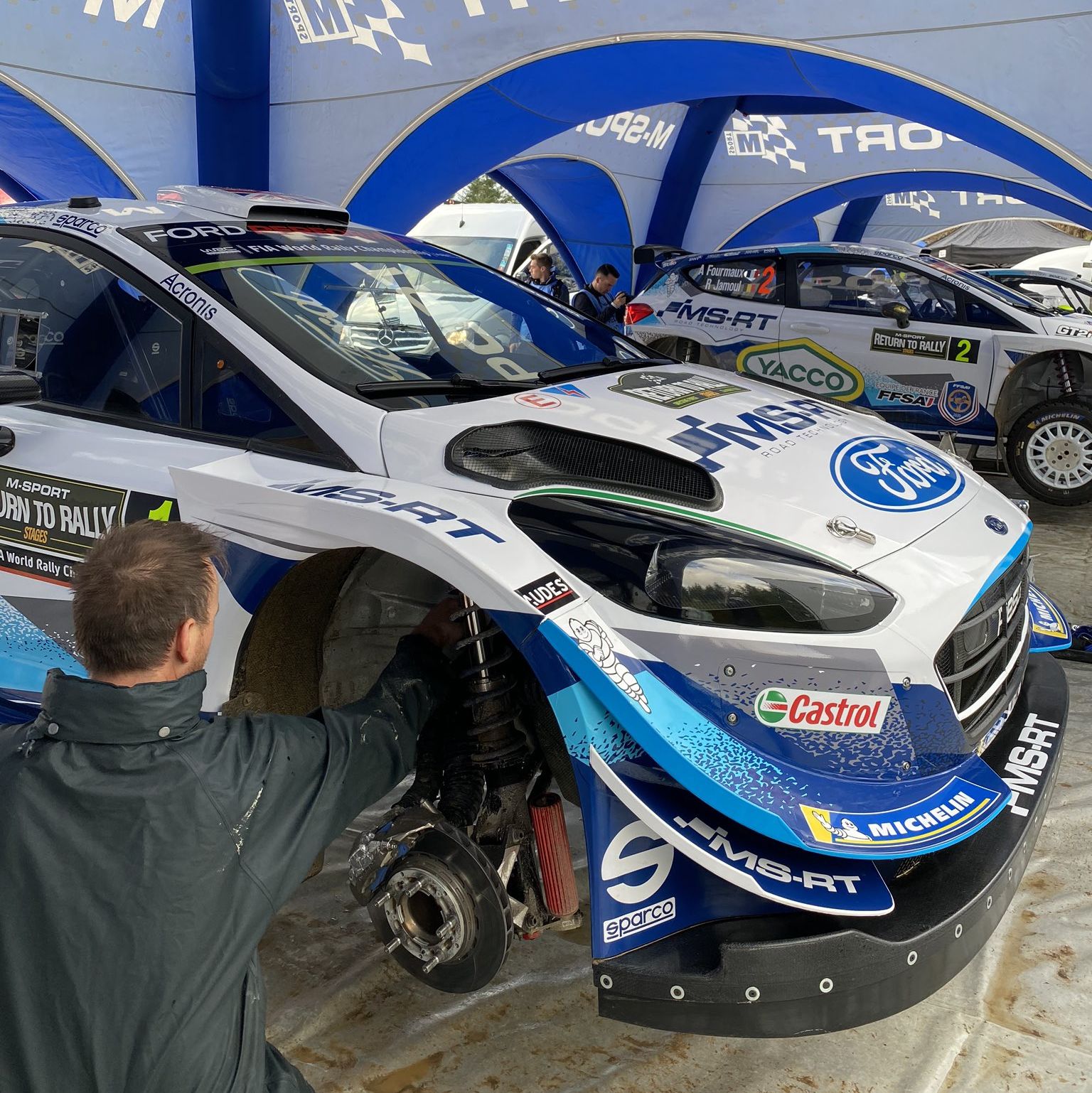 The pictures from the event allowed us to clarify the second modification added to the car. It consisted of the modification of the upper profile of the front fender. The original flat design has been replaced by an inverted-wing profile, as shown in the picture below (original design above, new design below). 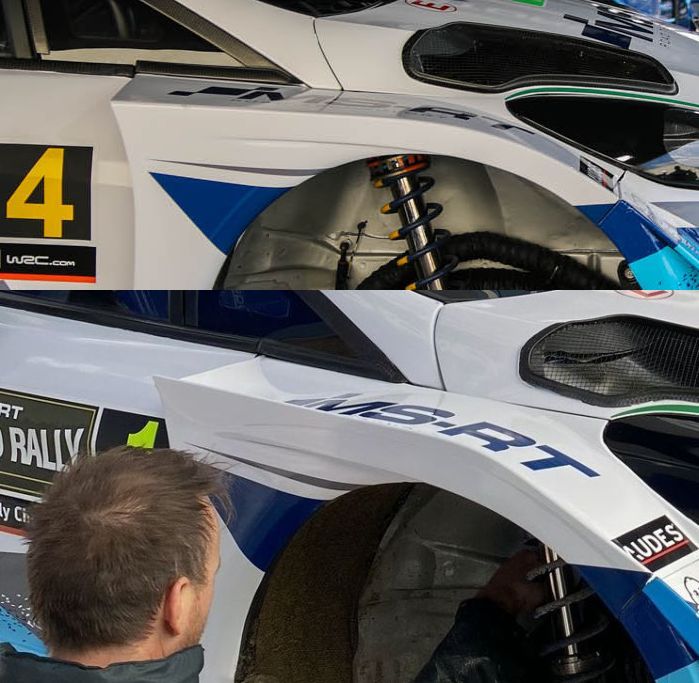 The goal of the new design is to force air to flow upwards at the exit of the fender. Thanks to Coanda, we know that air (like any other fluid) tends to follow the shape of the bodies even after they lose contact with them. The result is that air is sent upwards, reducing the interaction with the side mirror (less drag) and increasing the efficiency of the rear wing, thus generating higher downforce at the rear. 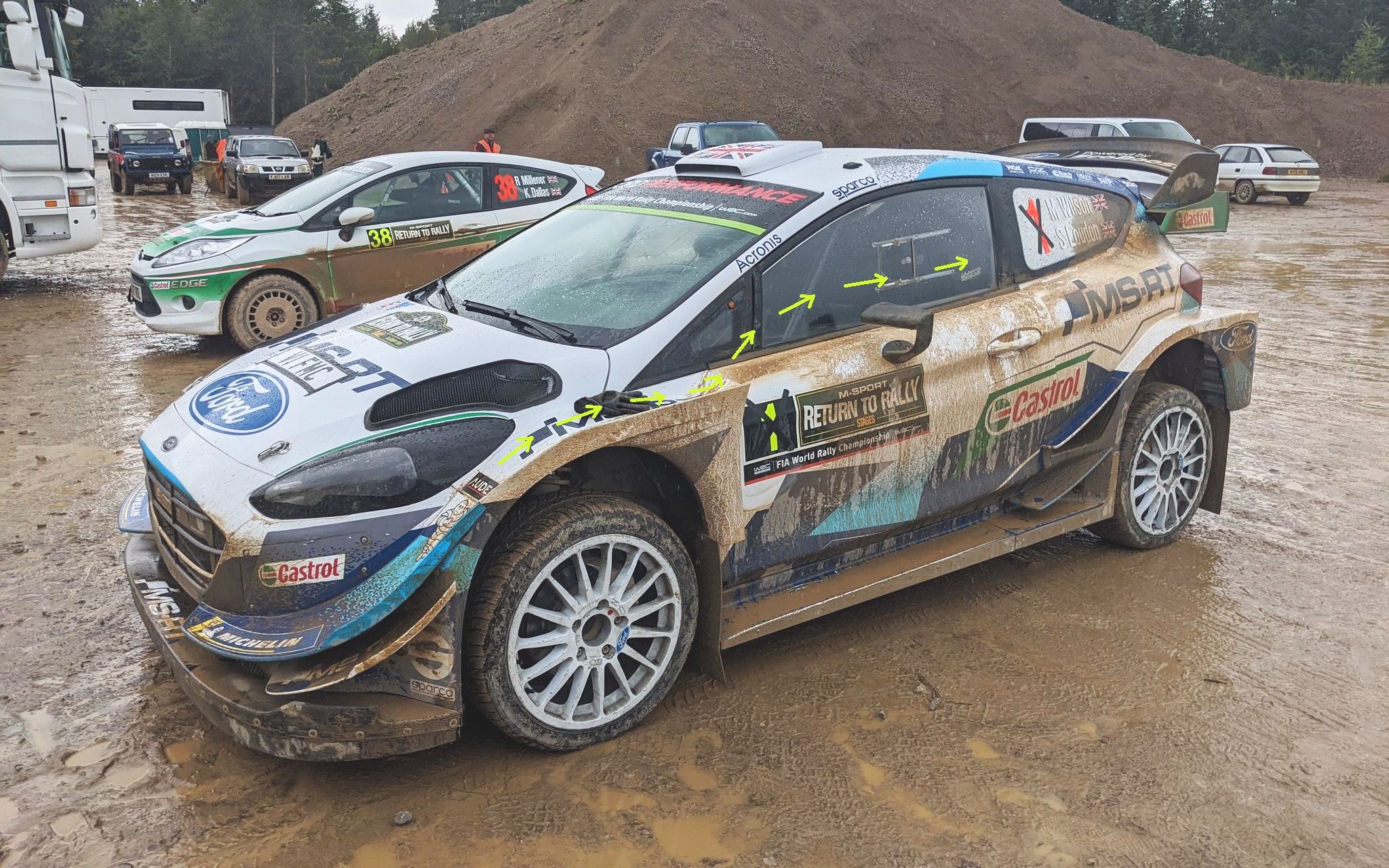 The potential side effect of this modification would be that the wing-shape may contribute to accelerating air, thus pressure over the fender would be reduced, and less downforce would be generated.

Programmed two weeks before Rally Estonia, the Lõuna-Eesti Ralli was an excellent opportunity for drivers to get in contact with Estonian gravel roads in competition mode, as well as to return back to competition mode, after such a long break. For this reason, almost all WRC contenders were present at the event. 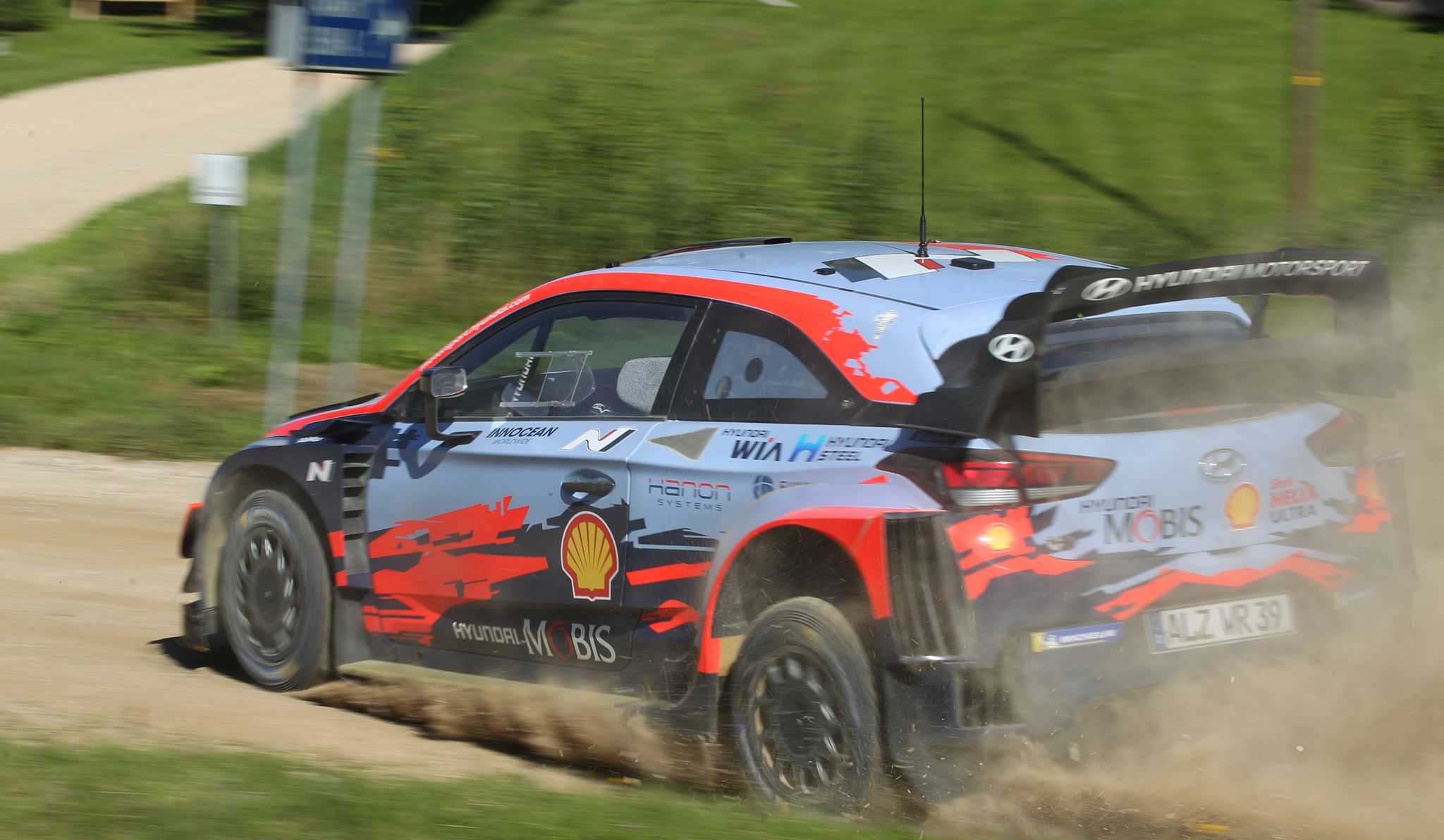 Hyundai was present with their two top drivers duo (Neuville/Gilsoul and Tänak/Järveoja) who had been developing, early in the week, the Rally Estonia pre-event tests. They both drove the latest spec i20 Coupé WRC, including the new design (vertical) of the rear fender vents the team has been using since the tests held in Finland in June, which we reviewed here. 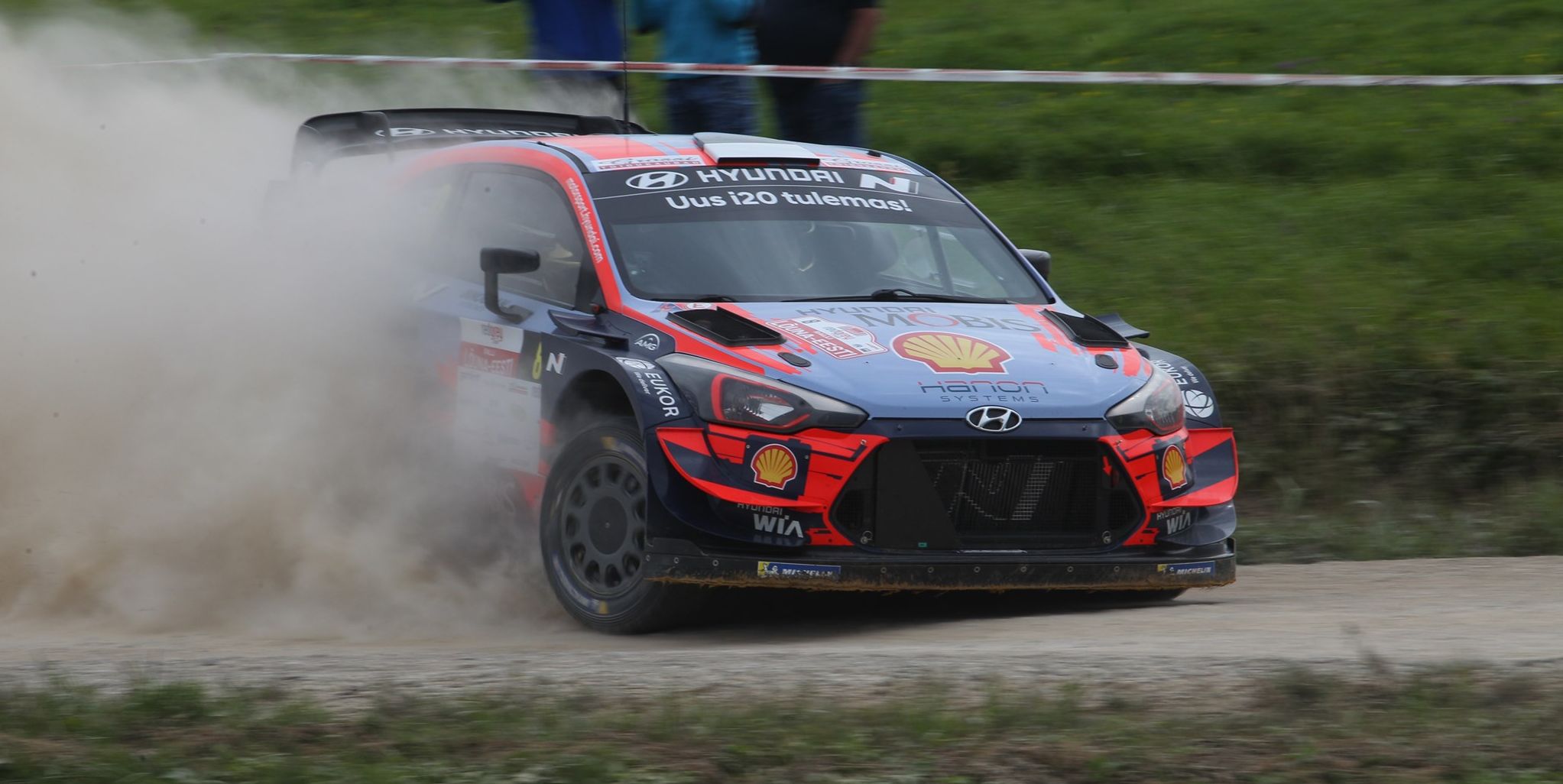 All three Toyota driver’s duos were also present in Võru, in what it was going to be the return to competition for the Japanese team since Rally México. They all drove the latest spec Yaris WRC, with no sign of the front aero modifications recently evaluated by Ogier/Ingrassia in the Rally Estonia pre-event tests held two weeks earlier, which we reviewed here. 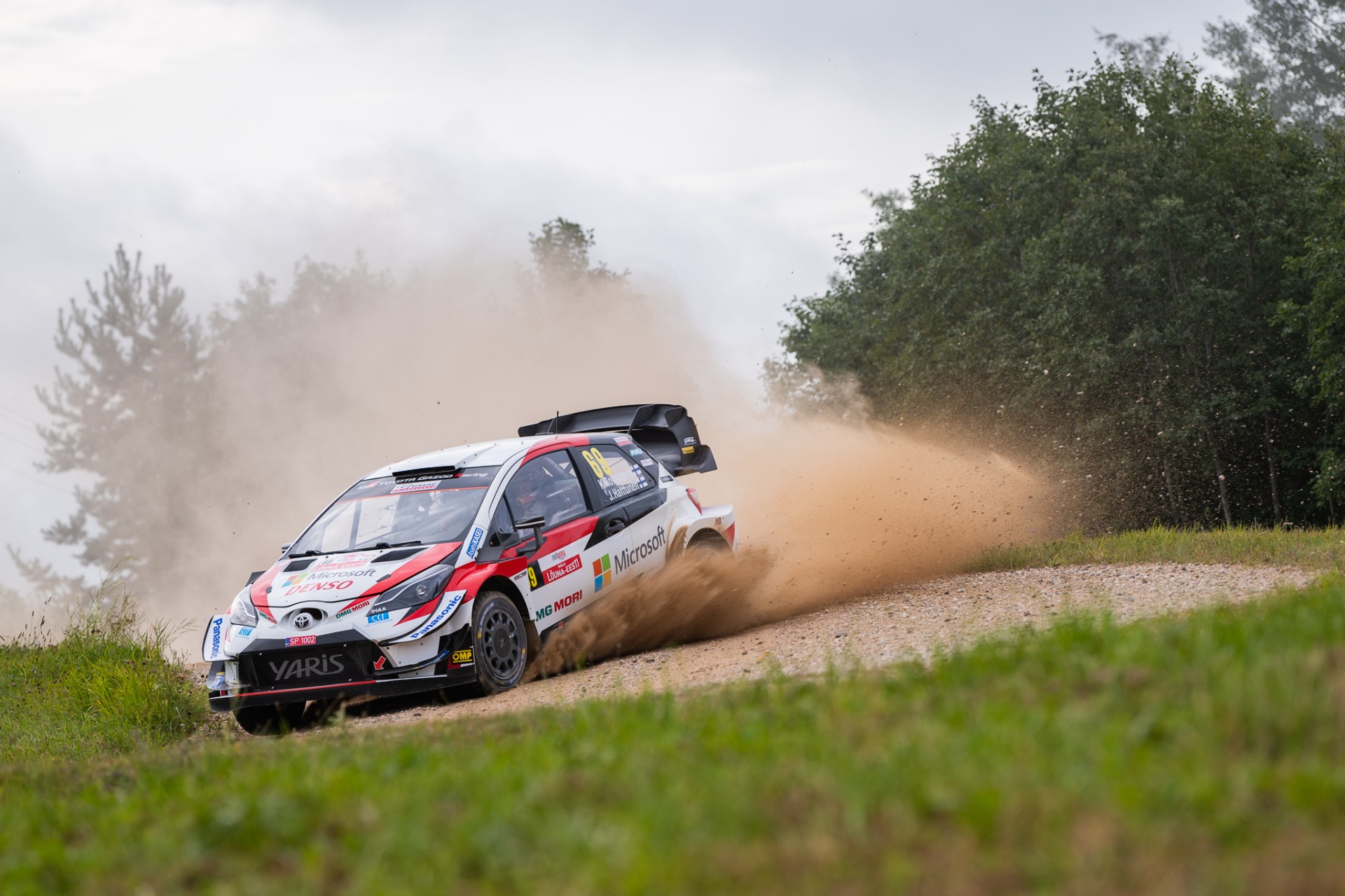 On the M-Sport side, the duo Lappi/Ferm was present at the Estonian event driving the JanPro Racing Team’s Fiesta WRC, in the 2020 specification, but without the modifications used by Wilson/Loudon in Greystoke. Also, Suninen/Lehtinen took part in the event, at the wheel of an old spec Fiesta R5, in order to get a first contact with the Estonian gravel roads. 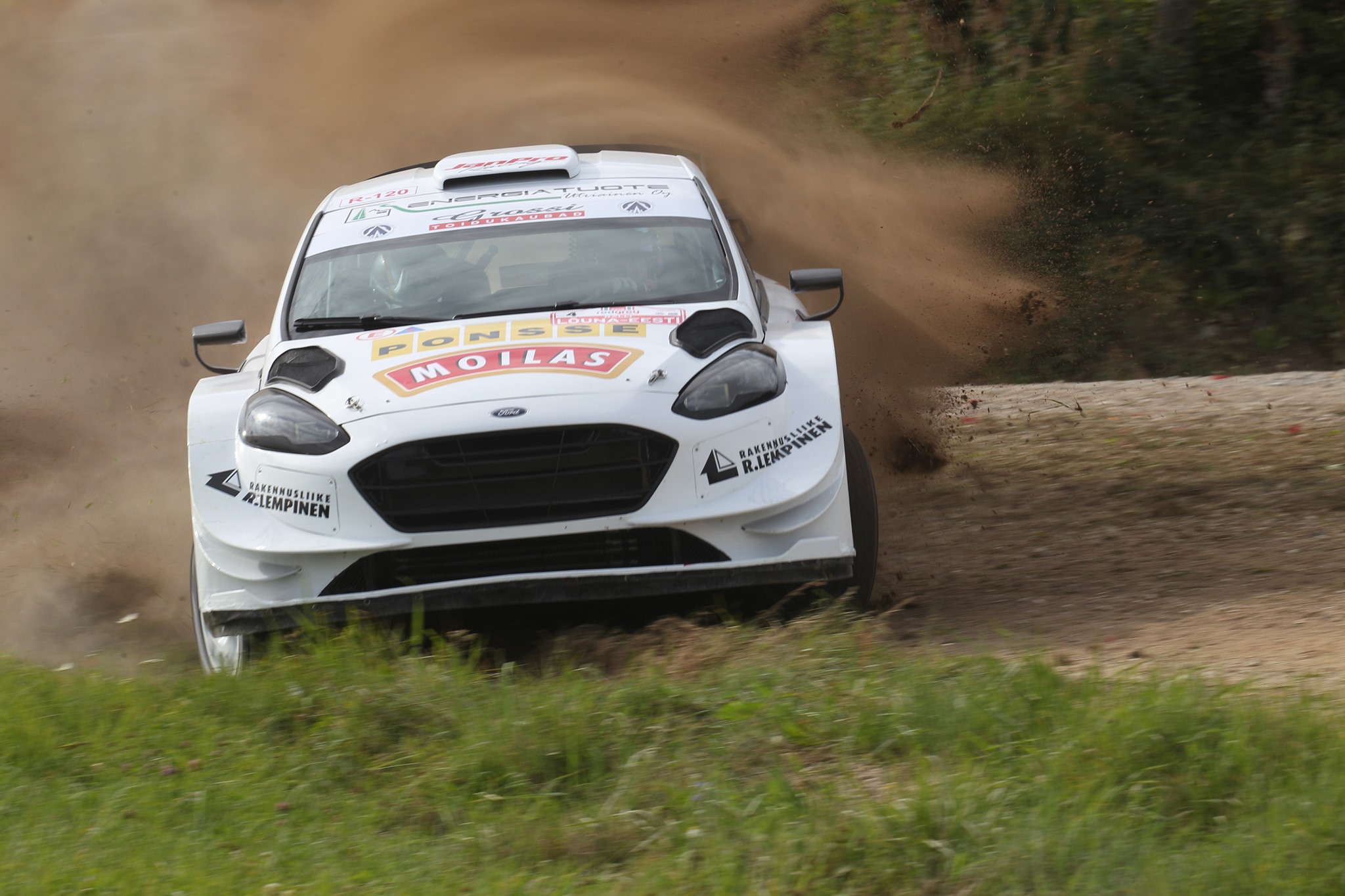 The ambient temperatures and the short length of the stages allowed the teams not to use the full cooling capacity, for what Toyota and Hyundai cars used some partial blockage at the front inlet, as shown in the pictures below (signaled with a yellow arrow). 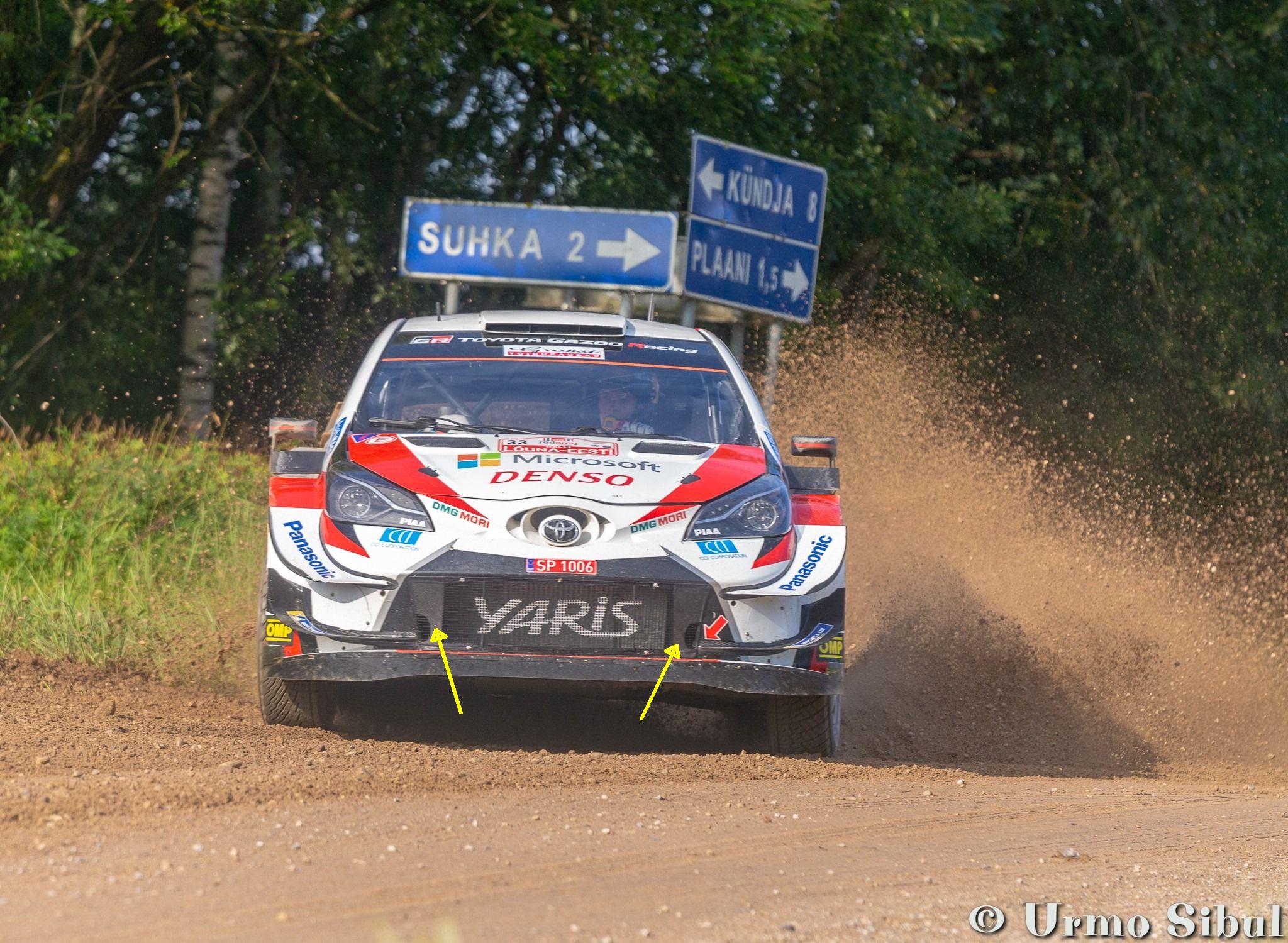 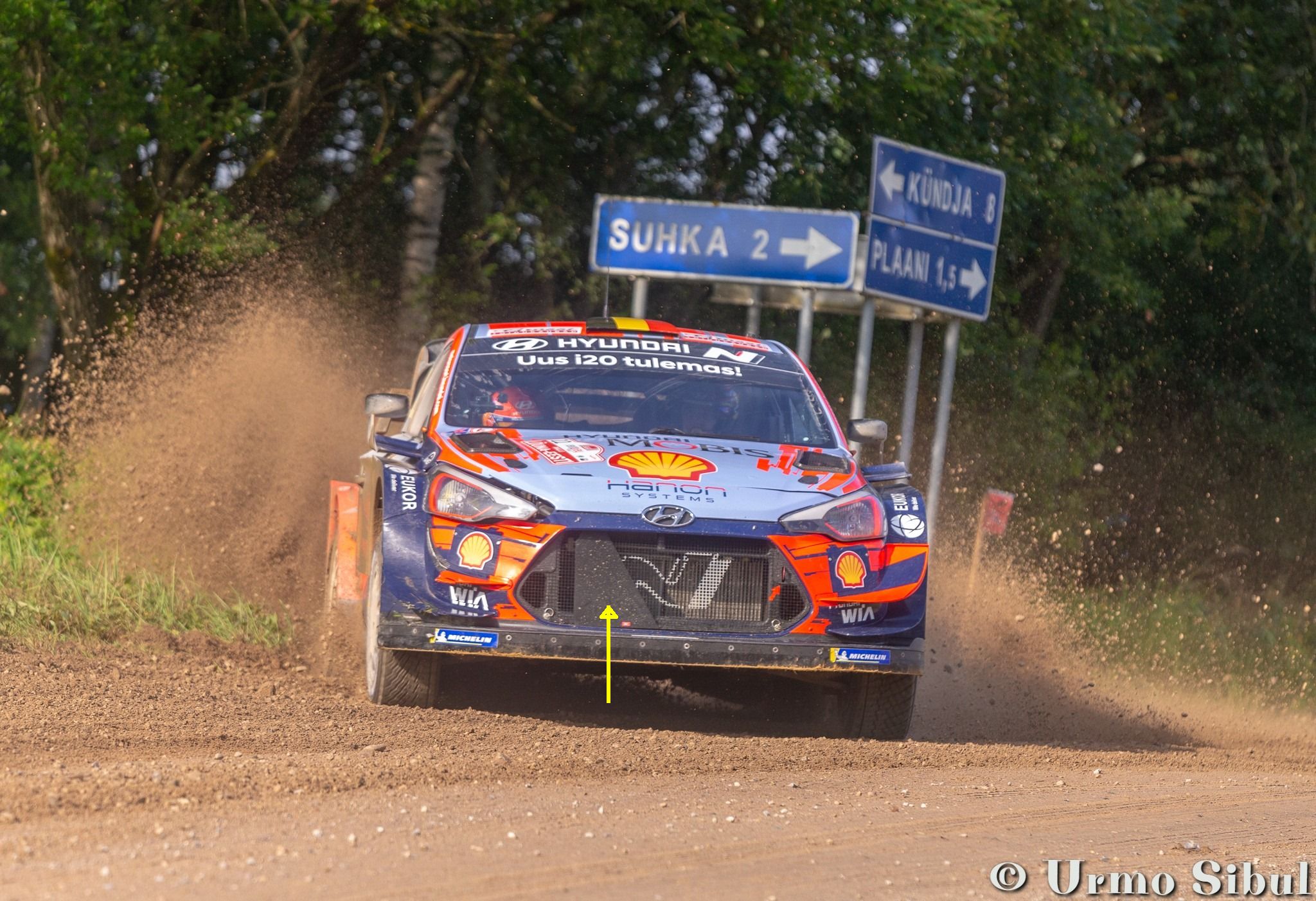 The event included four very fast gravel special stages, with average speeds between 117 and 133 km/h. At so high speed, aerodynamics becomes crucial, so it is interesting to analyze the results. The fact that almost all the WRC contenders allows us to compare between teams and to set some conclusions on the results, which can easily be related to the aero.

Timesheets show that the duo Tänak/Järveoja led the event since the very first stage and they set the fastest time in seven out of eight special stages (the other one was won by Rovanperä/Halttunen).

The results are really relevant as it is the first time since 2017 that a Hyundai sets such a dominant pace in fast gravel stages. Until now, it was the Toyota Yaris WRC the most effective car under these conditions, as we analyzed in a previous post. It is true that the winning duo has great experience driving on these routes (Tänak won the event in 2009 and had participated in 2006 and 2008 editions), while Neuville/Gilsoul hardly could follow the pace of the Toyotas. But even with that experience, such dominance can only be obtained with a well-balanced car, for what the result confirms the efficiency of the recent aero evolution of the Hyundai i20 Coupé WRC.

The Alzenau-based team has developed a very extensive program of aero development during the last 12 months, which has brought as a result the incorporation of a new dive plane configuration (Finland 2019), a new rear diffuser design (Monte Carlo 2020) and a new rear wing and other modifications (Mexico 2020). The result is a car with an almost completely reviewed aero configuration, which has proved to be much more effective, at least for Tänak/Järveoja in Estonia. The big question mark now is: will it be the same in other fast events and for the other drivers? Unfortunately, no other event with fast gravel stages is in the 2020 calendar, so we will have to wait until next year to confirm.