The Toyota Gazoo Racing started yesterday the Rally Turkey pre-event tests in the area of Loutraki. One of the main goals of these tests will be, as the Chief Engineer Tom Fowler explained to DirtFish.com, to recover competitiveness in a terrain where the Japanese cars have not been traditionally comfortable. Once the cooling issues that affected the team in the first years of the Yaris WRC have been solved, Fowler explains that current issues are related to the ride height: “We never seem to be able to keep the same level of performance when we were going to a higher ride height“. Why is that? For sure there are many factors involved, but… how aero is affected? And why this has a special impact on the Toyotas, compared to the other teams? We try to answer these questions in the next lines. 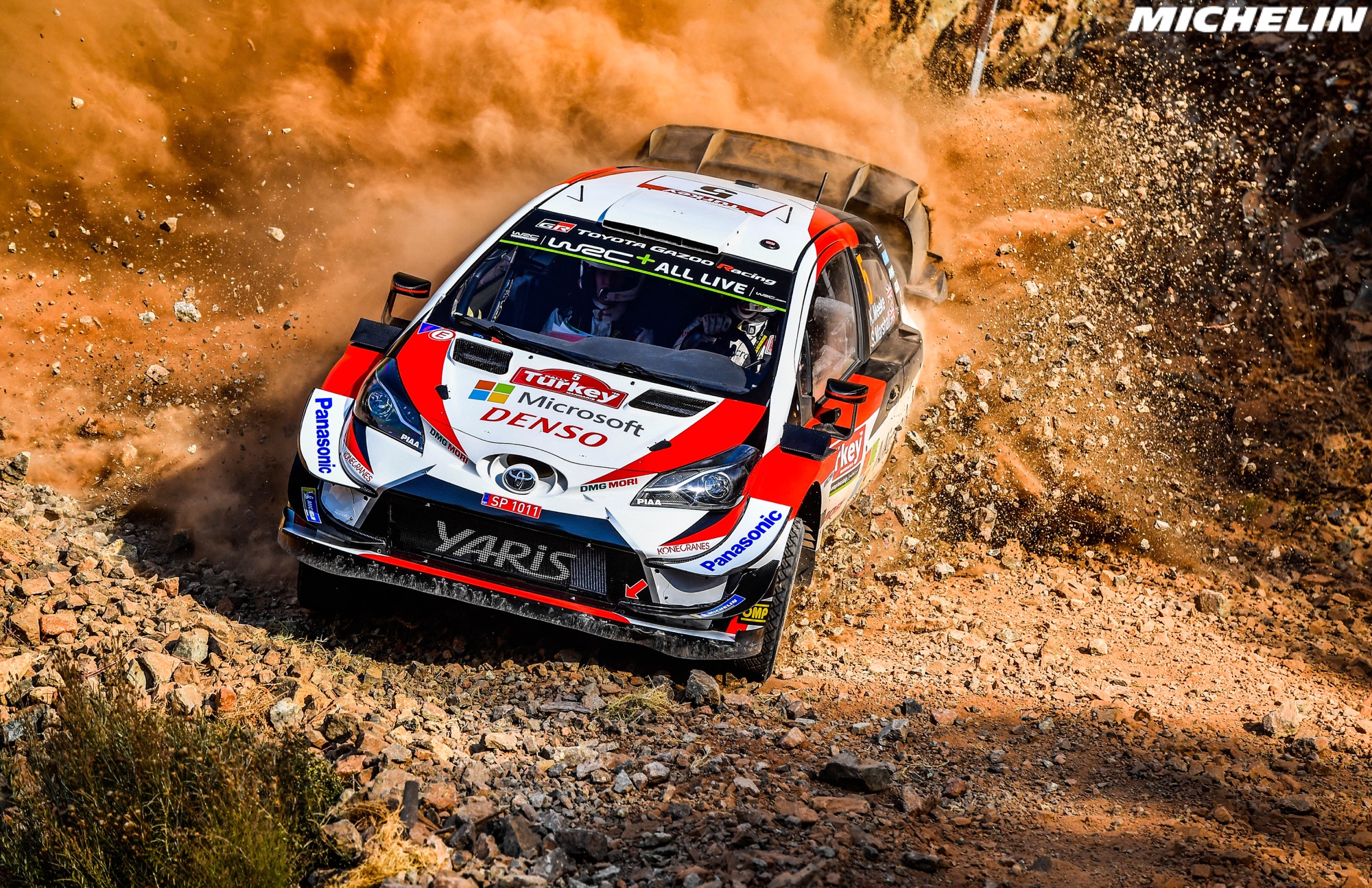 The stages of Rally Turkey are known to be some of the roughest stages of the season, at the level of ancient events such as Acropolis or Cyprus. In order to protect the car from impacts with stones and make it more reliable, the engineers need to increase the ride height of the cars, sometimes to the maximum values allowed by the suspension. Also, suspension needs to work at the maximum travel distance to absorb all the irregularities of the terrain. The picture below shows the differences in ride height and suspension travel between the car used in Turkey 2018 and the car used in this year in Monte Carlo. 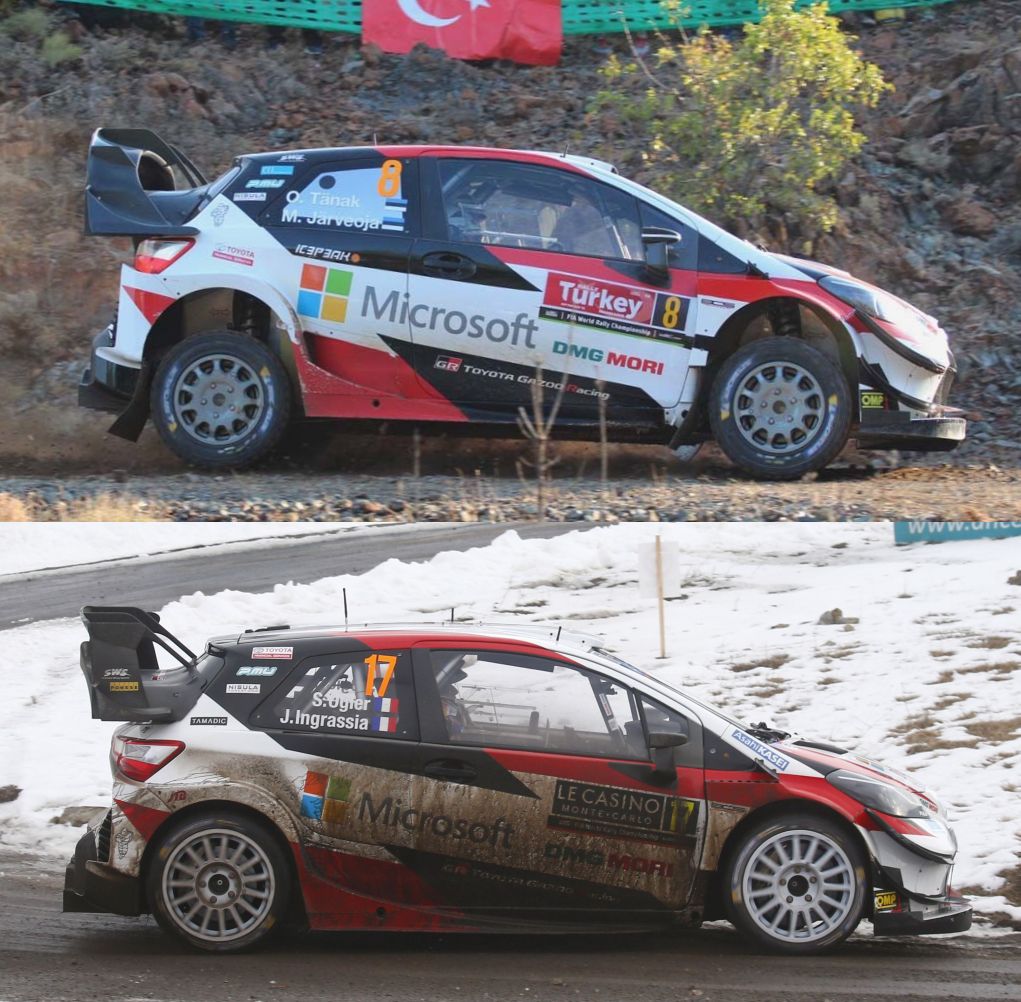 Toyota Yaris WRC at Rally Turkey 2018 (above) and at Rally Monte Carlo 2020 (below) – pictures by Fatih Esenlik – ewrc-results.com (above) and Toyota Gazoo Racing (below)

The first consequence of allowing so much air to enter under the car is that the airflow speed is significantly reduced, and we know, by Bernoulli, that this means a pressure increase, and even lift (negative downforce) might be generated.  Also, when the flow speed is reduced, the rear diffuser loses efficiency, as the exit speed is reduced, and the capacity of removing air from the rear of the car decreases, leading to an increase of pressure at the rear of the car. If the pressure under the rear wing increases, the rear wing becomes also less effective, as the pressure difference between above and below the wing is also reduced. The consequence of it all is that the car’s capacity to generate downforce is significantly reduced, both under the car and at the car’s rear. 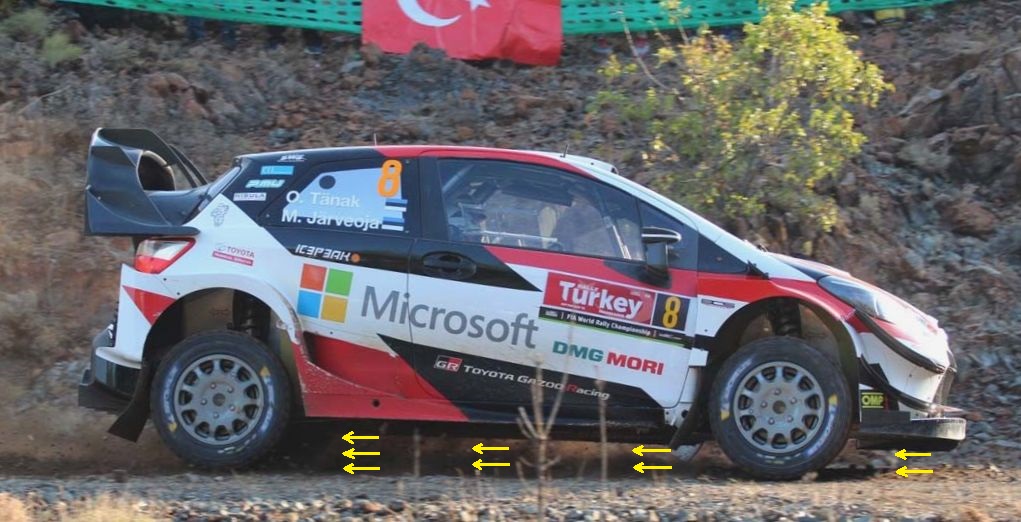 Note the space between the wheels and the fenders in the picture below, showing the increase of suspension travel. Increasing the car ride height has also other consequences. On one side, the car is taller, leading to an increase in the front area. The result is an increase of resistance to air (drag), meaning that top speeds are reduced with respect to other events. On the other side, the higher ride means that the center of gravity of the car is raised, making the car more unstable. 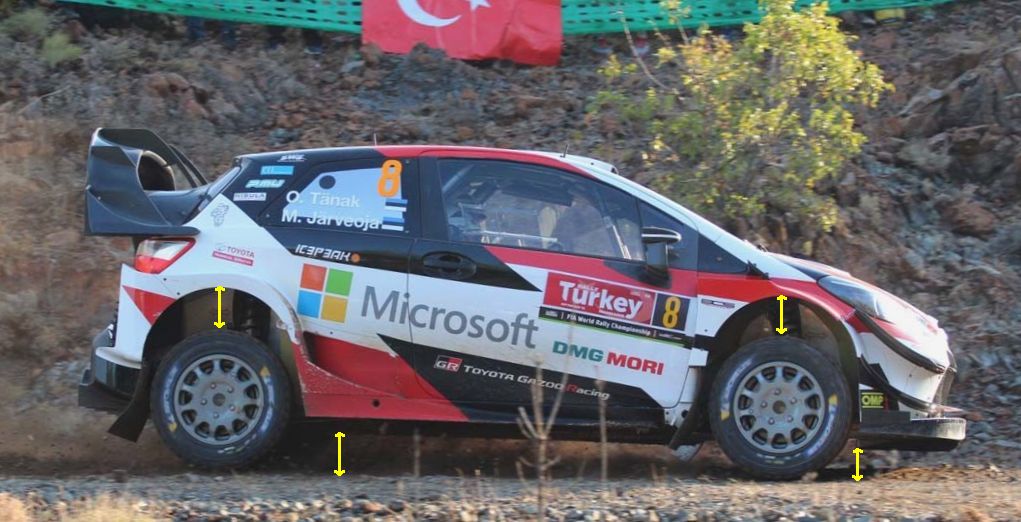 Secondly, due to the rough terrain, the suspension is softened, allowing the car to constantly change the ride height (pitching). The results is that the amount of air flowing under the car changes constantly, and by extension, the pressure under the car. The consequence is an important reduction in the efficiency of the undercar aero elements, such as the wheel diffusers or the rear diffusers, making the car more unstable and difficult to drive.

These side effects have an impact on all cars. Why then Toyota seems to be more impacted by them? In our opinion, the reason is the optimized balance of the car. Since the modification of the front aero package introduced in the Rallye Monte Carlo 2018, the Yaris WRC has been considered the most aero efficient car of the 2017 generation. But being the most aero effective also means that it is the most sensitive to disturbances (more prone to lose the balance). And, as we have seen, the stages of Rally Turkey are full of disturbances, for what it is not surprising that the Yaris WRC was the most impacted….until the 2019 edition.

For the 2020 Rally Turkey, and having seen the recent development of the full aero package of the Hyundai i20 Coupé WRC, it is probable that their current balance is also impacted by these disturbances to a similar extent than the Toyotas. In this case, the most benefited from these conditions would be the Fiesta WRC, with maybe a less developed aero package but that it has proven to be very robust. We will see…in Turkey.

2 thoughts on “Why a higher ride height becomes a problem for Toyota in Rally Turkey?”