In a rally where punctures and dust played key roles, the cooling improvements, the reliability of the aero parts and the impact of high ride height on the aero performance became the major aero issues the teams had to face the last weekend in Turkey.

As usually there, the high temperatures (above 30C at midday) forced the teams to deploy all the cooling solutions they have in stock and even new ones. The brakes cooling was a real concern for all teams. To minimize this problem, Hyundai used during all the event a double cooling air feed into the front brake disks, as shown in the picture below. 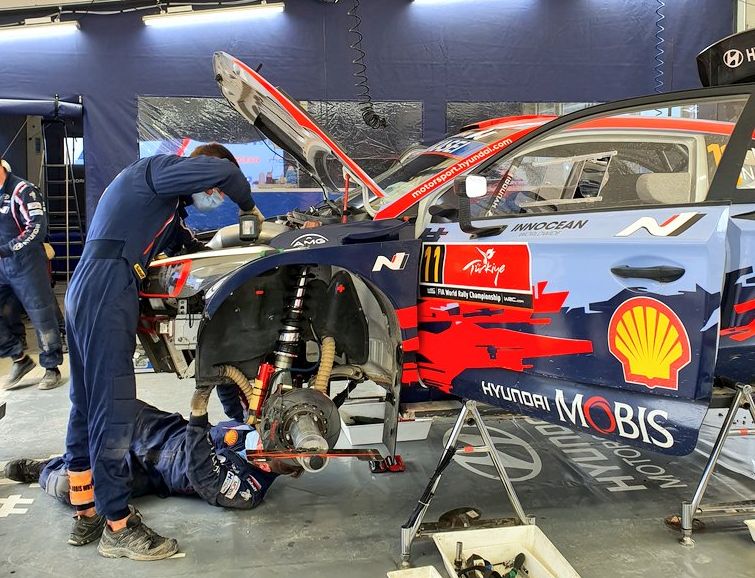 The yellow corrugated tubes show the two cooling air feed into the front brake disk: the one on the left connecting with the front (specific) cooling brake air intake and the one on the right (bigger diameter) with air from the engine bay. At the rear, it was one of the few occasions when the Hyundai i20 Coupé WRC had both sides air intakes open (the other event when this usually happens is México), in order to get maximum cooling air for rear brakes and transmission.

The engine cooling is also a real problem in Turkey. MSport installed bigger fans with the radiators to face this problem, while also Toyota reported having done some improvements into their cooling system. 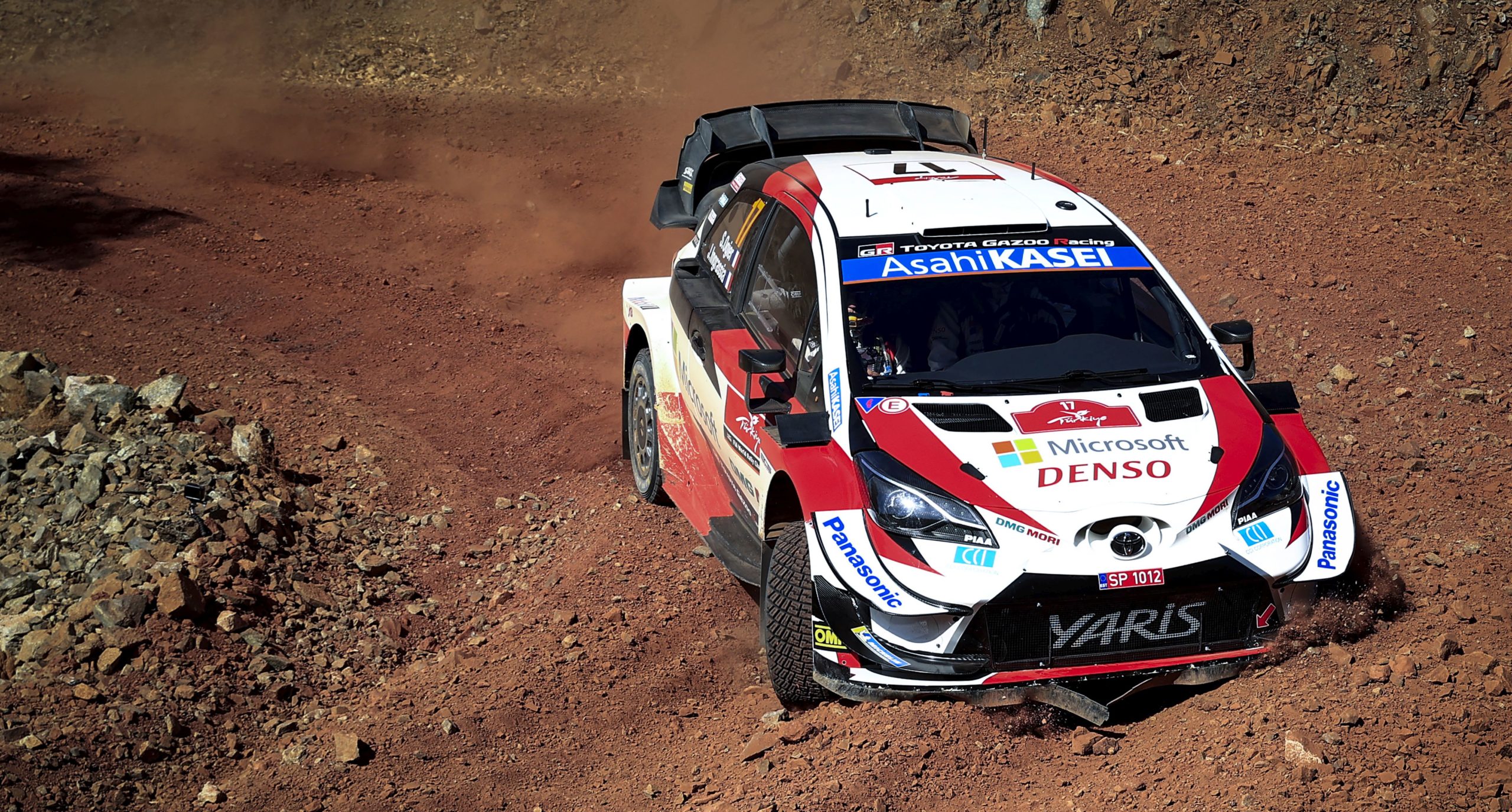 But the real problem related to the aero this year in Turkey, rather than cooling, was the reliability of the aero parts. One of the most often damaged parts was the front splitter, especially for Toyota and Ford. We found no evidence of serious damage to the Hyundai’s front splitters during the event. On the contrary, the front splitter of the Toyota Yaris WRC consistently suffered the loss of the front part, made of a flexible material. All three cars suffered from this problem in stages such as Yeşilbelde and Çetibeli, where they all ended without this part (or hardly damaged). 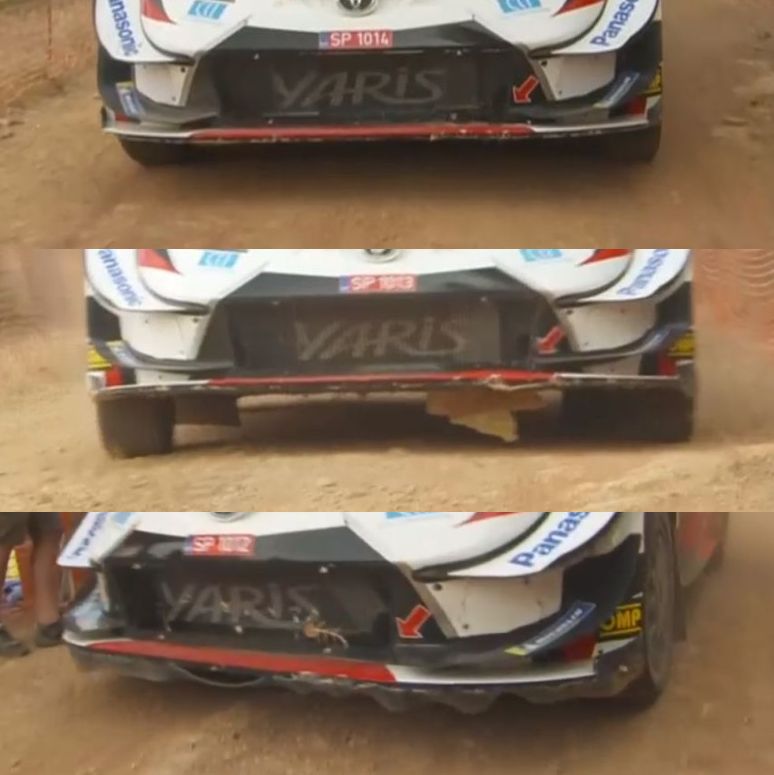 Front splitters of the Toyota Yaris WRC of Rovanperä/Halttunen (top), Evans/Martin (centre), and Ogier/Ingrassia (bottom) at the end of SS9 Çetibeli 1 – pictures extracted from WRCplus.com video

The loss of the front part means that the splitter loses efficiency, as the amount of air entering under the car increases significantly. Add this to the fact that the ride height of the cars is the biggest of the year in Turkey, and the result is that a large amount of air enters under the car, increasing the pressure there (as airspeed is reduced). Thus, no downforce is generated; on the contrary, even lift can be generated, and the loss of grip becomes drastic. It has also an impact over the rear diffuser, as it has to deal with a higher amount of air, and the suction effect is reduced.

Also, MSport’s cars suffered from the same problem, as they use the same material at the front splitter. The problem in the Fiesta WRC becomes worse when the full splitter becomes damaged, as both Lappi and Suninen suffered in Turkey.

The impact of losing the front splitter could be evaluated at Kizlan stage. While in the first pass (SS5) both MSport cars set a very similar (just 0,3 seconds separating Lappi/Ferm from Suninen/Lehtinen), at the second pass (SS8), with no front splitter in the car of Sunien/Lehtinen, the time difference rose to 4,4 seconds. This means that the loss of the front splitter would represent a loss of 0,3 seconds per Km, which is very significant.

The duo Lappi/Ferm suffered the same problem, so they had to improvise an elaborated duct tape solution at the end of SS9 Çetibeli 1. 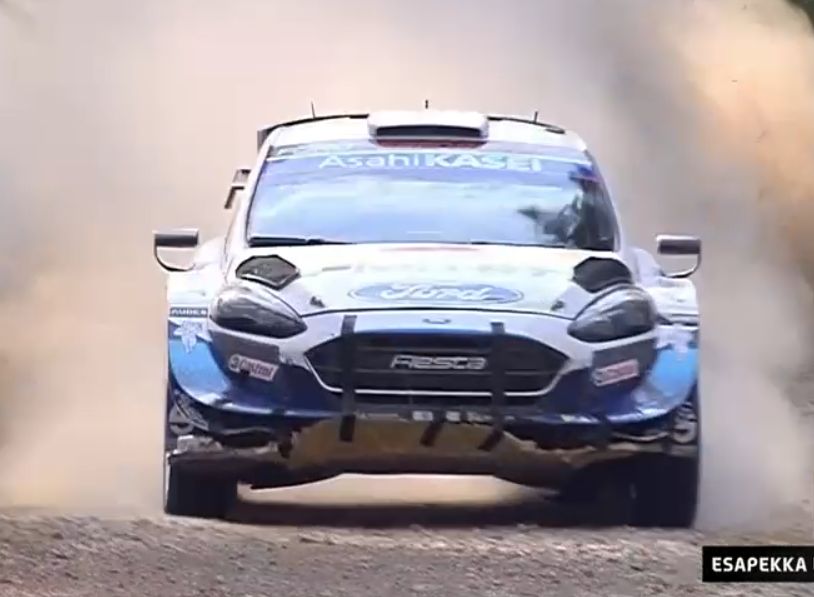 The loss of the full splitter loss allows a higher amount of air to flow under the car, increasing the pressure there and the grip is significantly reduced. Add this to cars with a higher than usual ride height, and understeering becomes unavoidable, as Lappi complained during the event. Hopefully, the modifications of the front aero package that M-Sport plans to introduce since the next event (Rally Sardinia) will contribute to increase the front grip, and understeering should reduce. However, the lack of pre-event test before Sardinia (as the team has already announced) won’t help to take advantage of it.

Other front aero parts resulted affected during the Turkish event, such as the front dive planes, the winglets located over the front fenders or the full front fenders. Toyota was again the team most affected by the loss of these parts. 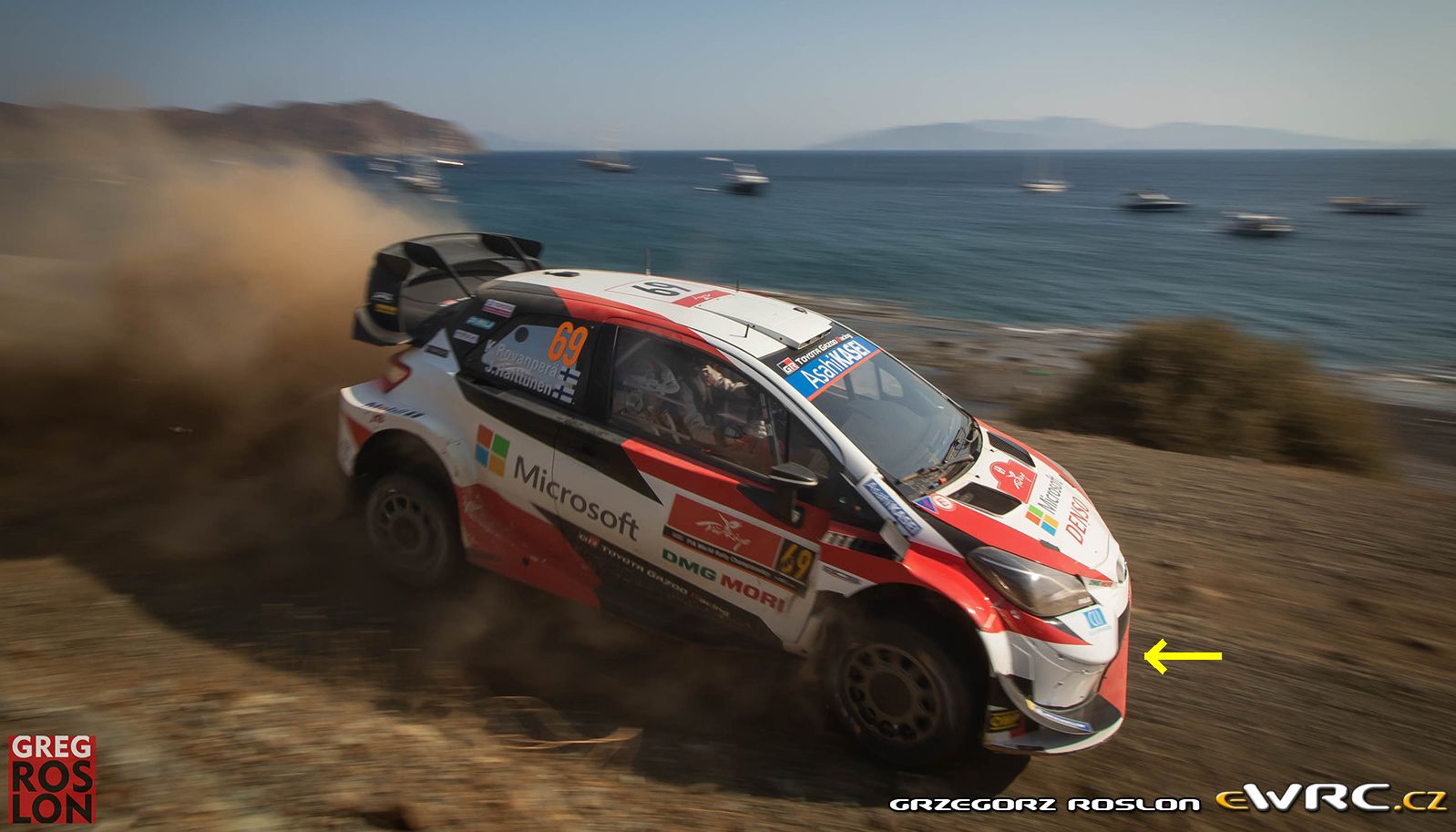 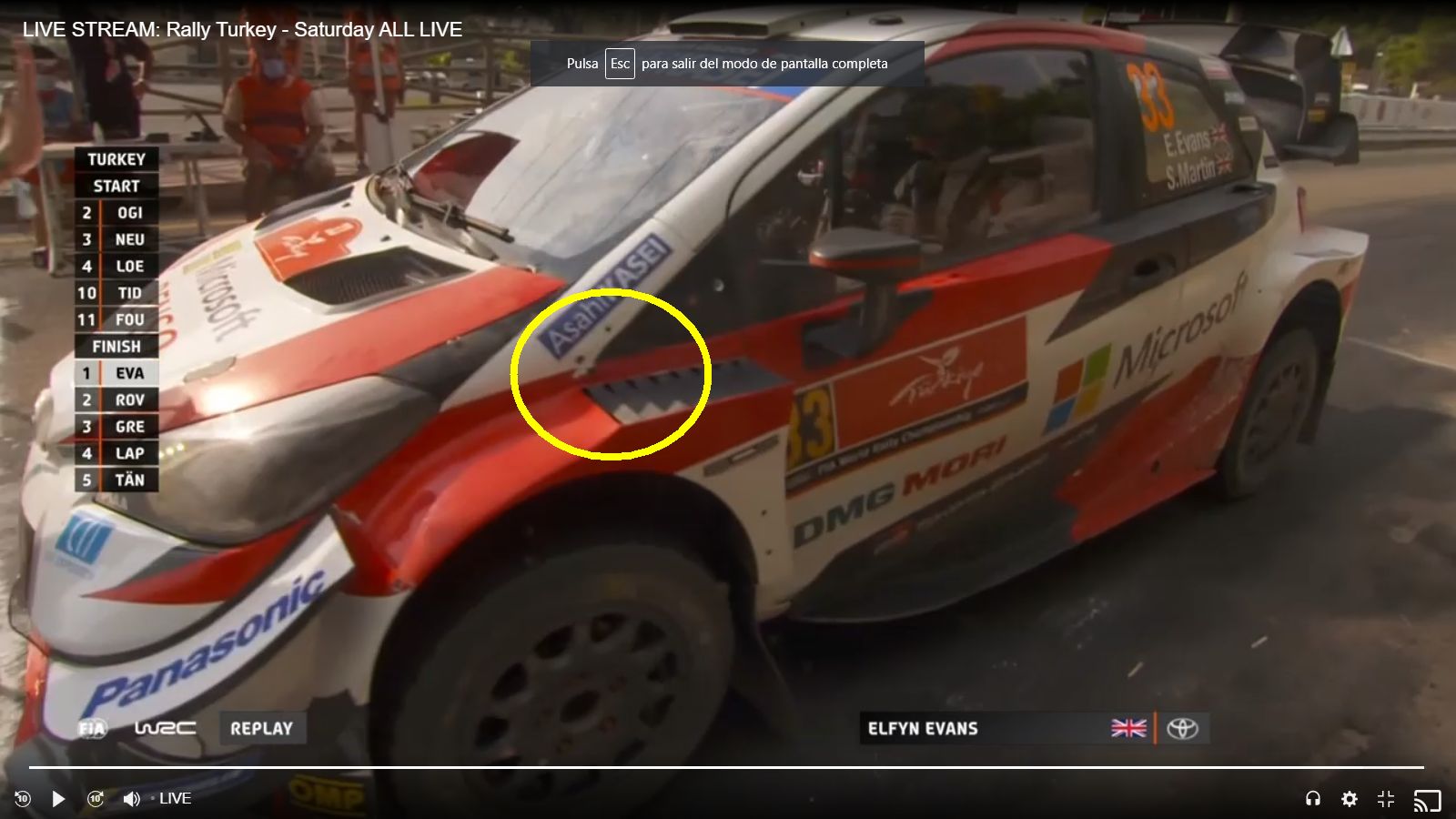 The result in both cases was a loss of grip at the front, due to lower downforce generated (by losing the dive plane) or to the lift generated by the loss of the winglet (as less air can be removed from the front fender).

The rear of the car also resulted impacted by the hardness of the terrain: damaged rear diffusers (as in the picture below) and rear fender vents were common. 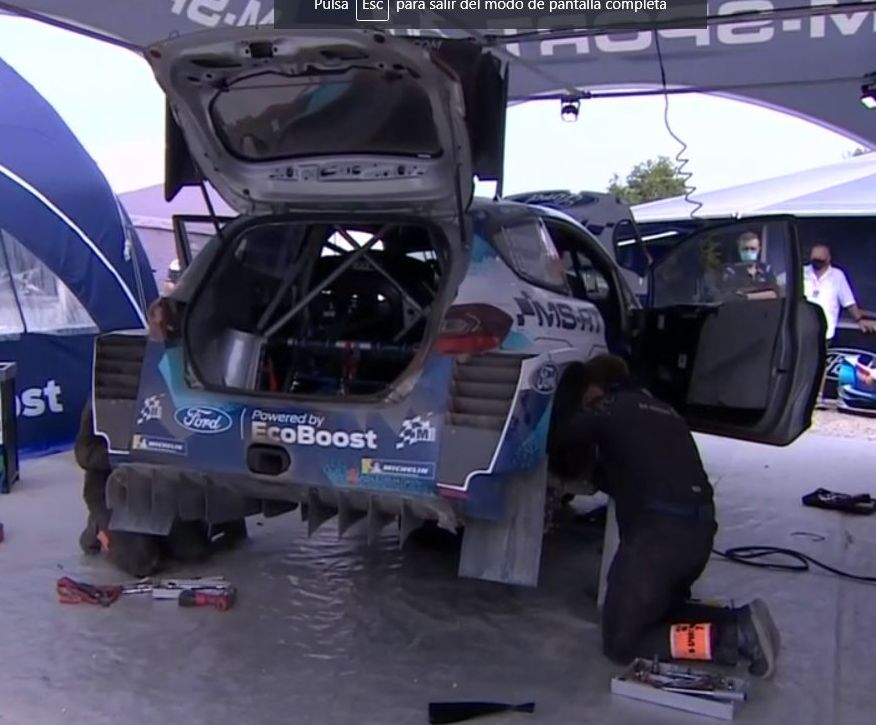 The picture above also shows that M-Sport introduced partial restriction of the rear fender vents, through a plate covering the lower vanes, while Toyota and Hyundai did not in this event. The goal would be to accelerate air removal through the open exit, in order to prevent dust and stones accumulation between the vanes, as shown in the picture below. 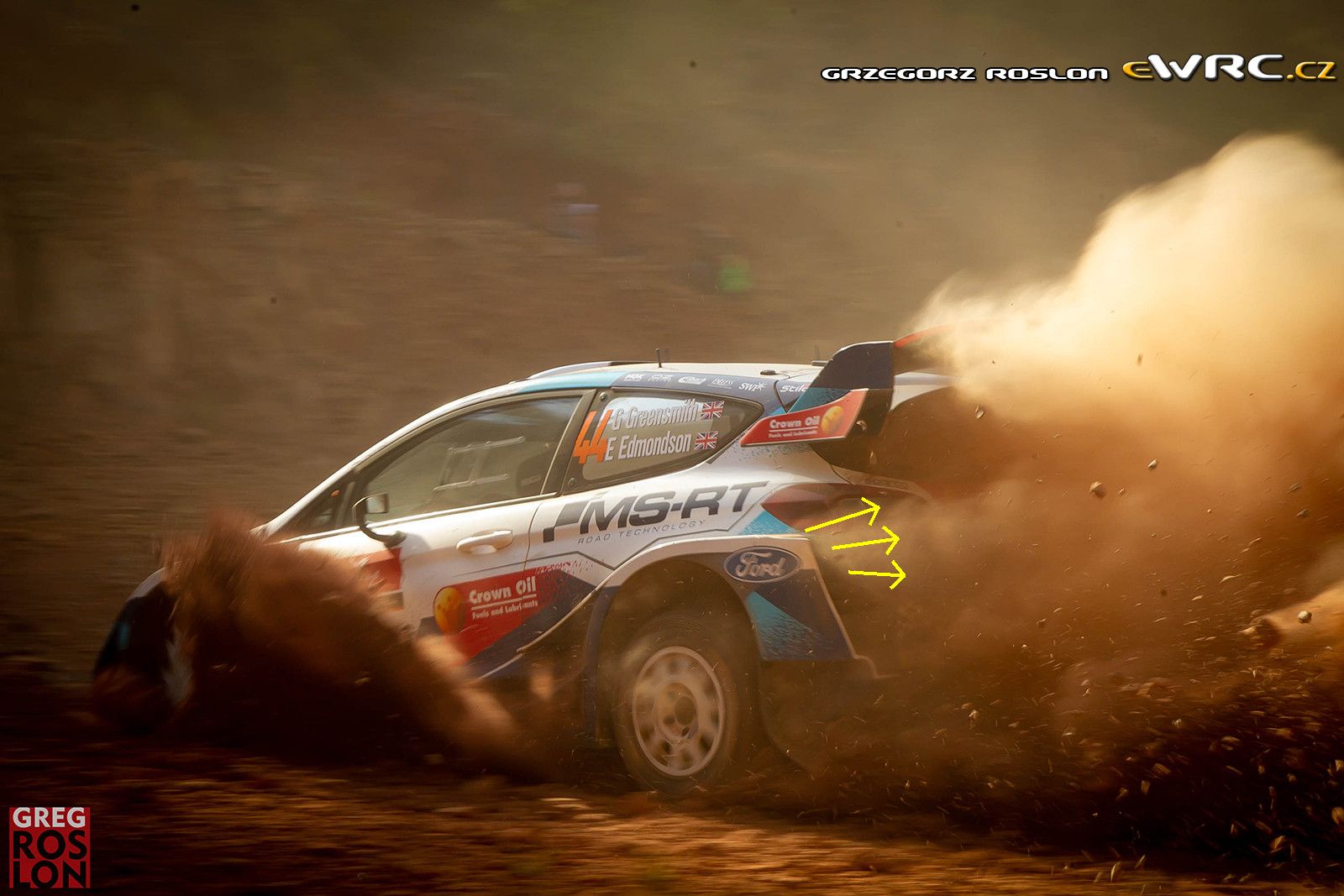 InTurkey, Hyundai was the team with more issues with the rear fender vents. Some cars did lose them or ended the stages with this part loose. 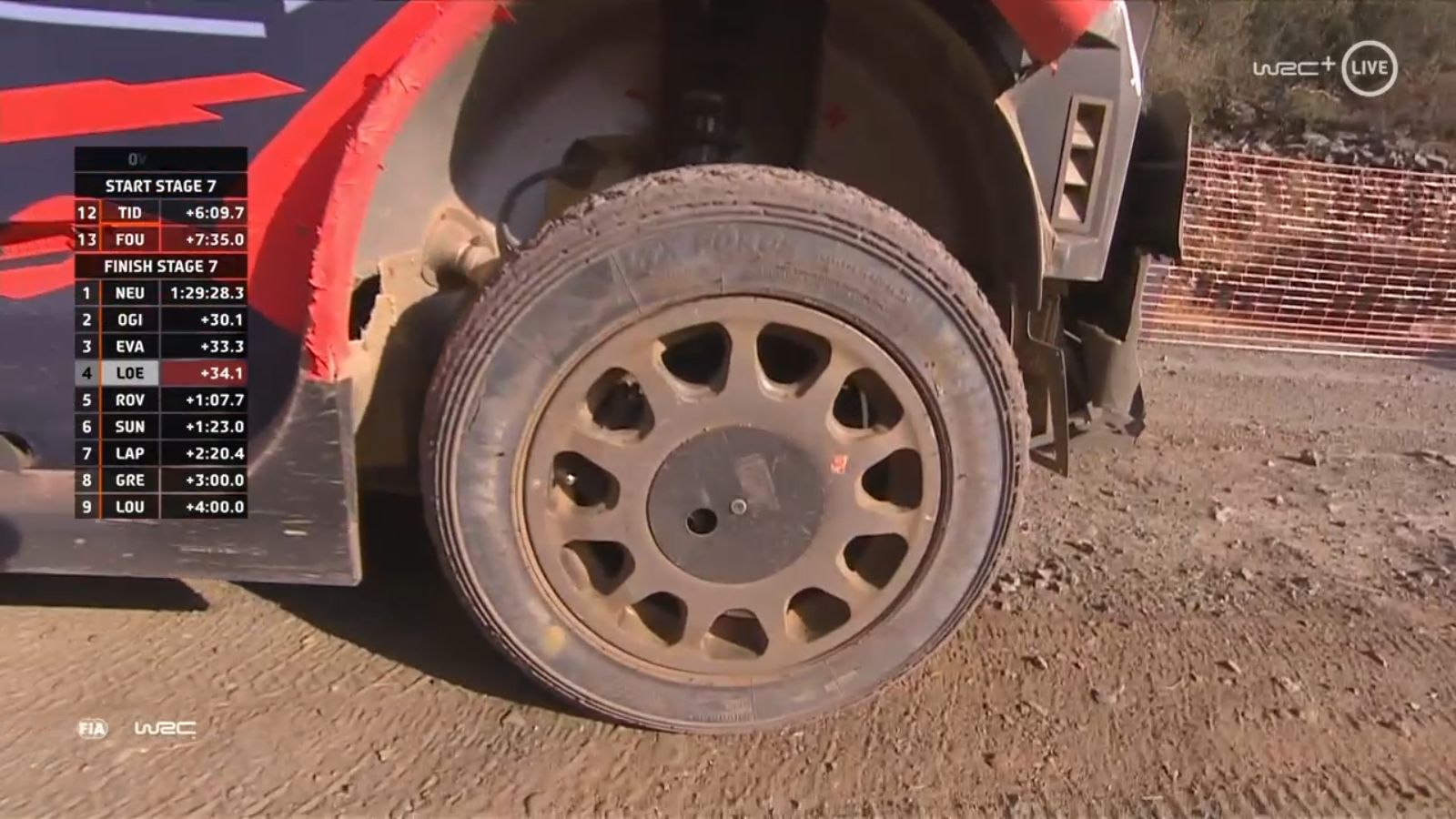 According to Technical Manager Tom Fowler in this interview to Dirtfish.com, Rally Turkey was a sort of ‘jinx rally’ for Toyota, due to the fact that they had problems keeping the same level of performance due to going into a higher ride height. We reviewed where the problem could be in a previous article. Now that the rally is finished, it is time to confirm if the problem persisted for Toyota.

In spite of the very low average speed in most of the Turkish stages (where aero importance is reduced) still, the results from one stage (Kizlan, average speed around 110 km/h) can give us some indications on the cars’ aero performance. And the results show that, on both passes, the fastest time was set by a Hyundai (Neuville/Gilsoul at SS5 and Loeb/Elena at SS8). It is true that their starting position was optimal, but the duo Ogier/Ingrassia also benefited from a similar advantage (they started right before Neuville/Gilsoul). With only one stage (two passes) no statistical values can be obtained. But it might be a confirmation that still, the high ride height problem is affecting to Toyota. At least, more than it is for Hyundai.

Once again, the presence of dust allowed getting very nice images of the car’s wakes. To end the present article from Rally Turkey we have selected the image below where the periodic frequency of swirls (vortices) can be clearly seen behind Rovanperä/Halttunen car. 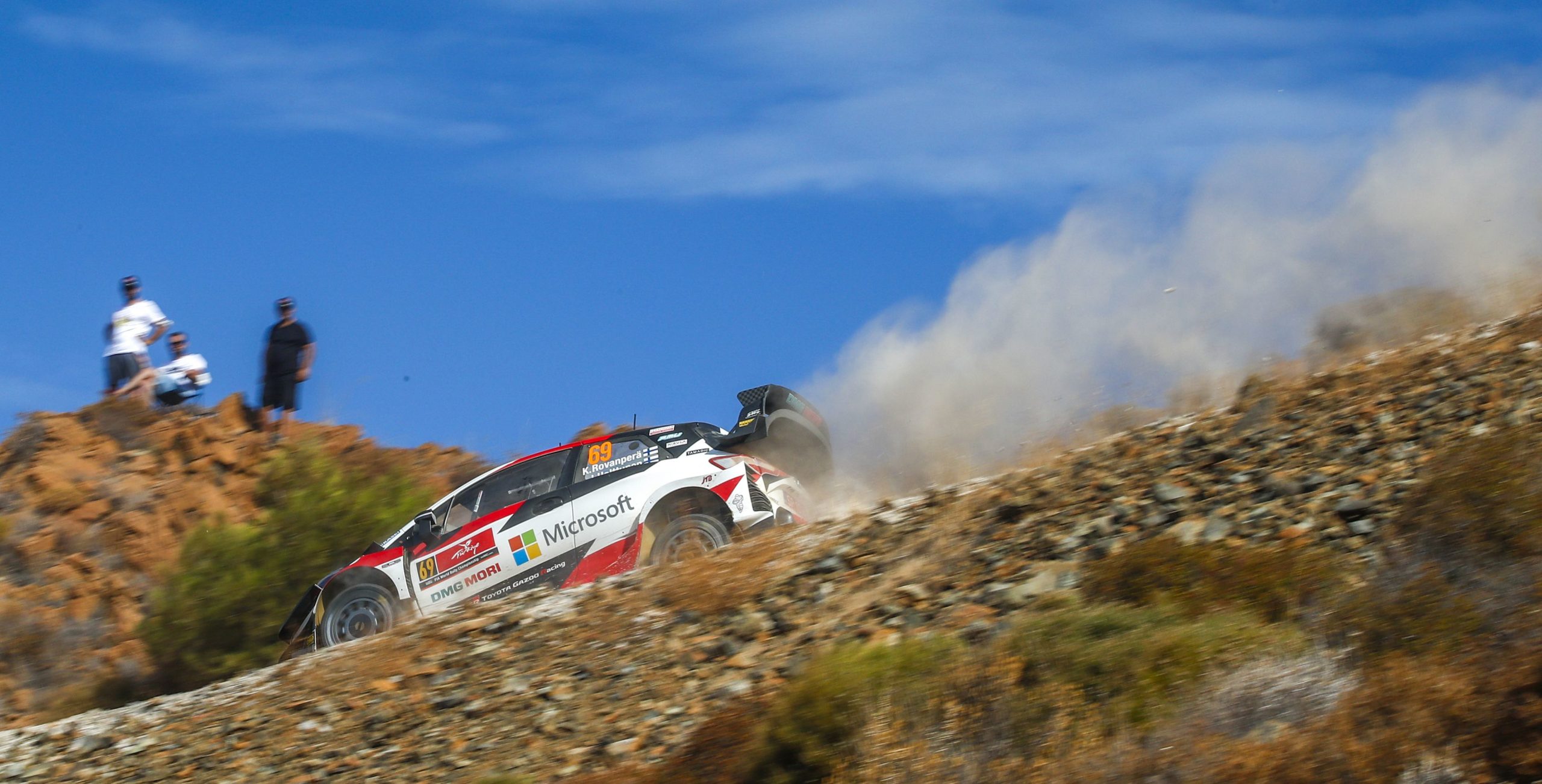