This article is dedicated to the memory of Laura Salvo. RIP

Brake cooling issues, Loubet’s aero learning process, the Ford Fiesta WRC front splitter loss and the eternal debate about which aero package (Toyota’s or Hyundai’s) was more performant in the Italian stages were some of the most relevant aero issues during the 2020 Rally Sardegna that are worth reviewing.

In opposition to other editions of Rally Sardegna, the current edition was held at relatively low temperatures (down to 13C early in the morning). Even so, images of red-hot brake disks were seen, such as the one in the picture below from the Hyundai i20 Coupé WRC of Sordo/Del Barrio. Note that even with a double fresh air feed (through the two corrugated pipes), the temperatures the disks reached were still very high. 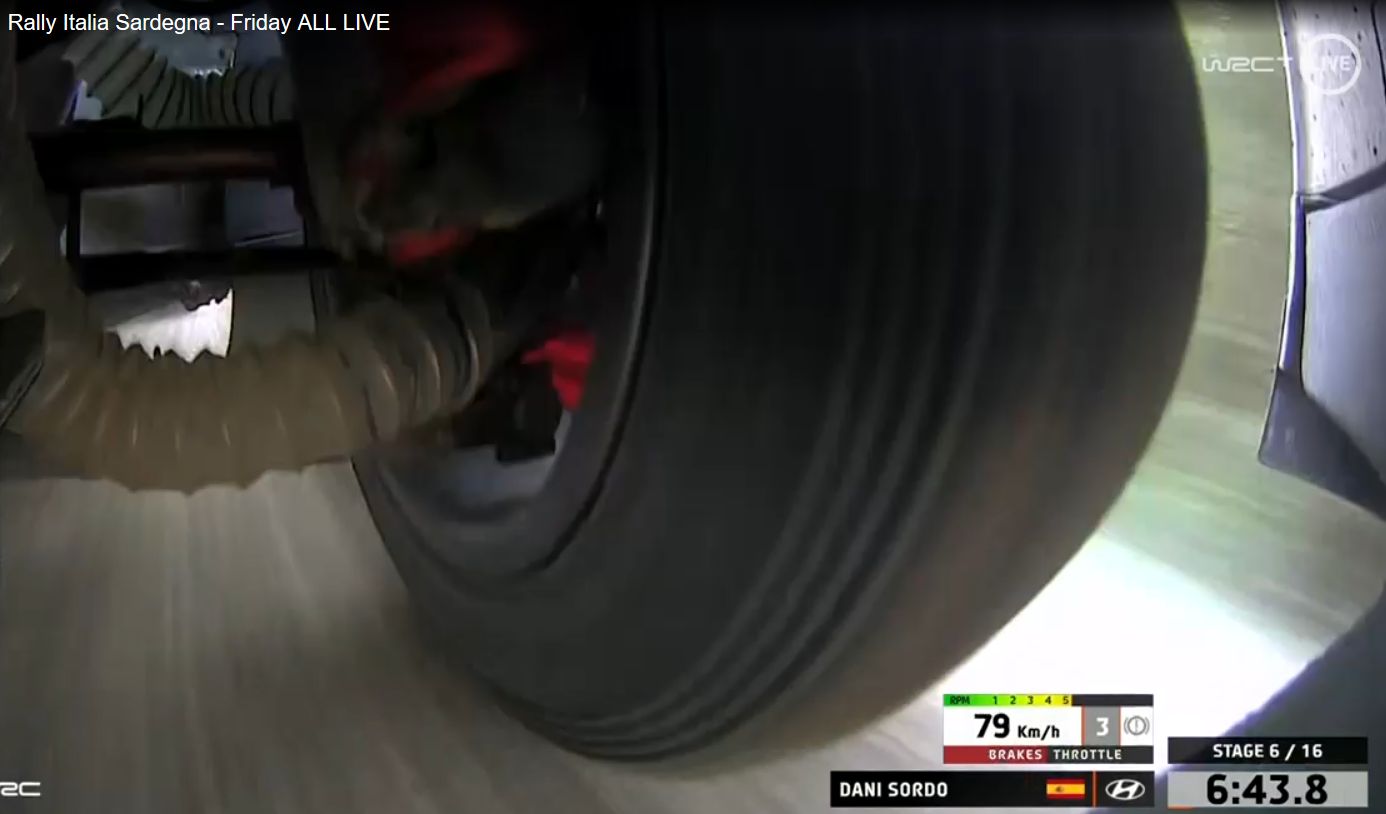 For the same reason, all available cooling sources were used by the teams, also at the rear. The picture below shows how Hyundai used again the connection of the air intake to the rear brake discs with a corrugated pipe. This is a solution that Hyundai only uses at the hottest events. In all the other events, no pipe is connected and even the air intake (on top of the side protection) is closed. 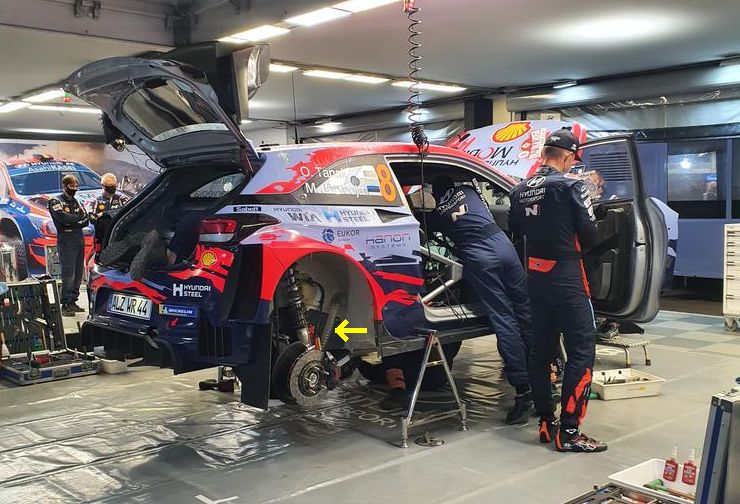 The dust was again a problem in the Italian event. Fortunately for the Toyota drivers, the air intake for rear brake cooling has no longer problems with dust, since it was relocated last year, to the upper part of the side protection (above the A in the picture below). The image shows how dust is sent to the location of the original air intake by the front wheels. 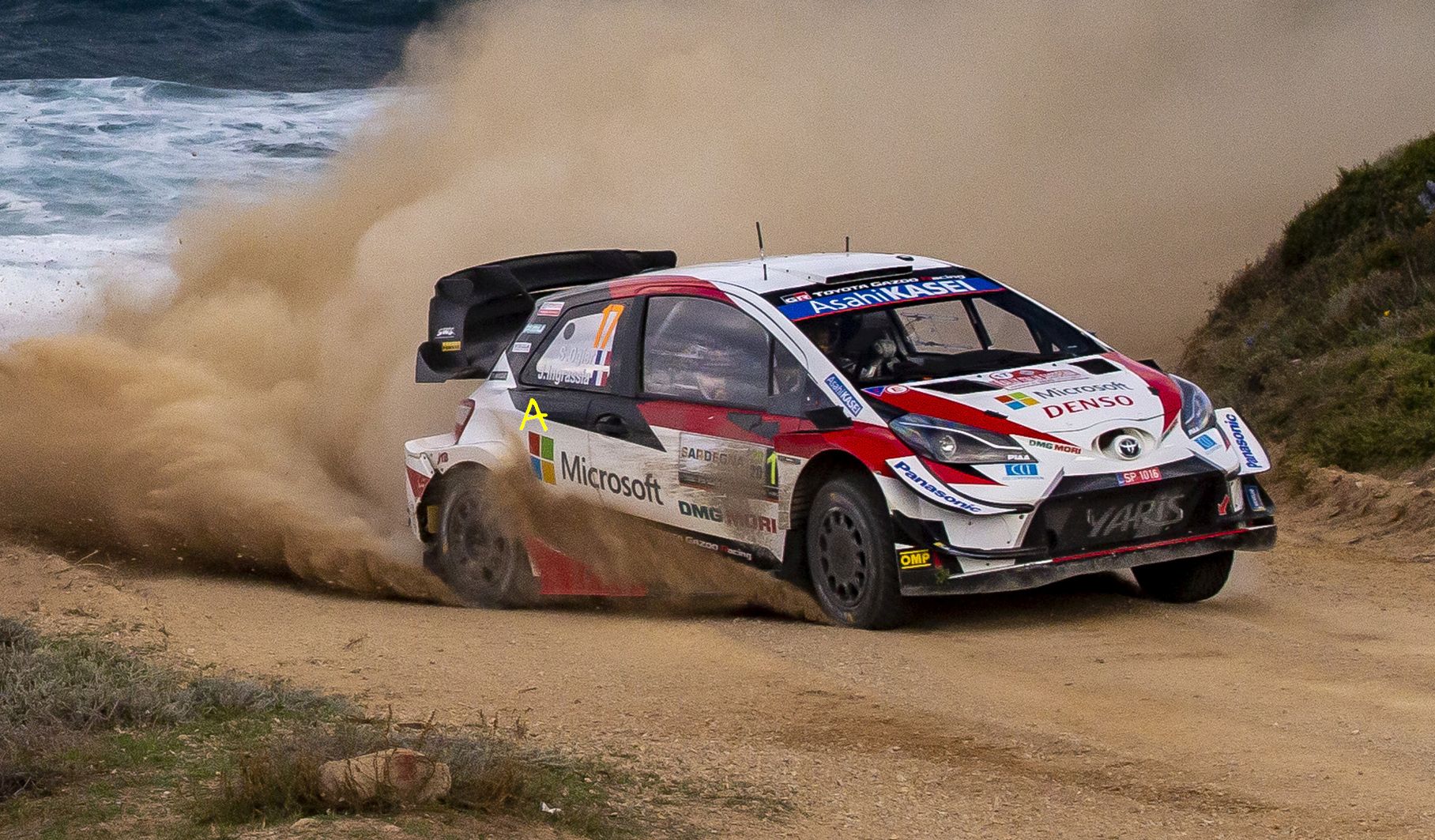 The only car still suffering from this problem was the Yaris WRC of Katsuta/Barritt’s car, which is an old spec car, with the rear air intake located at the original location (B), thus more exposed to dust entrance. 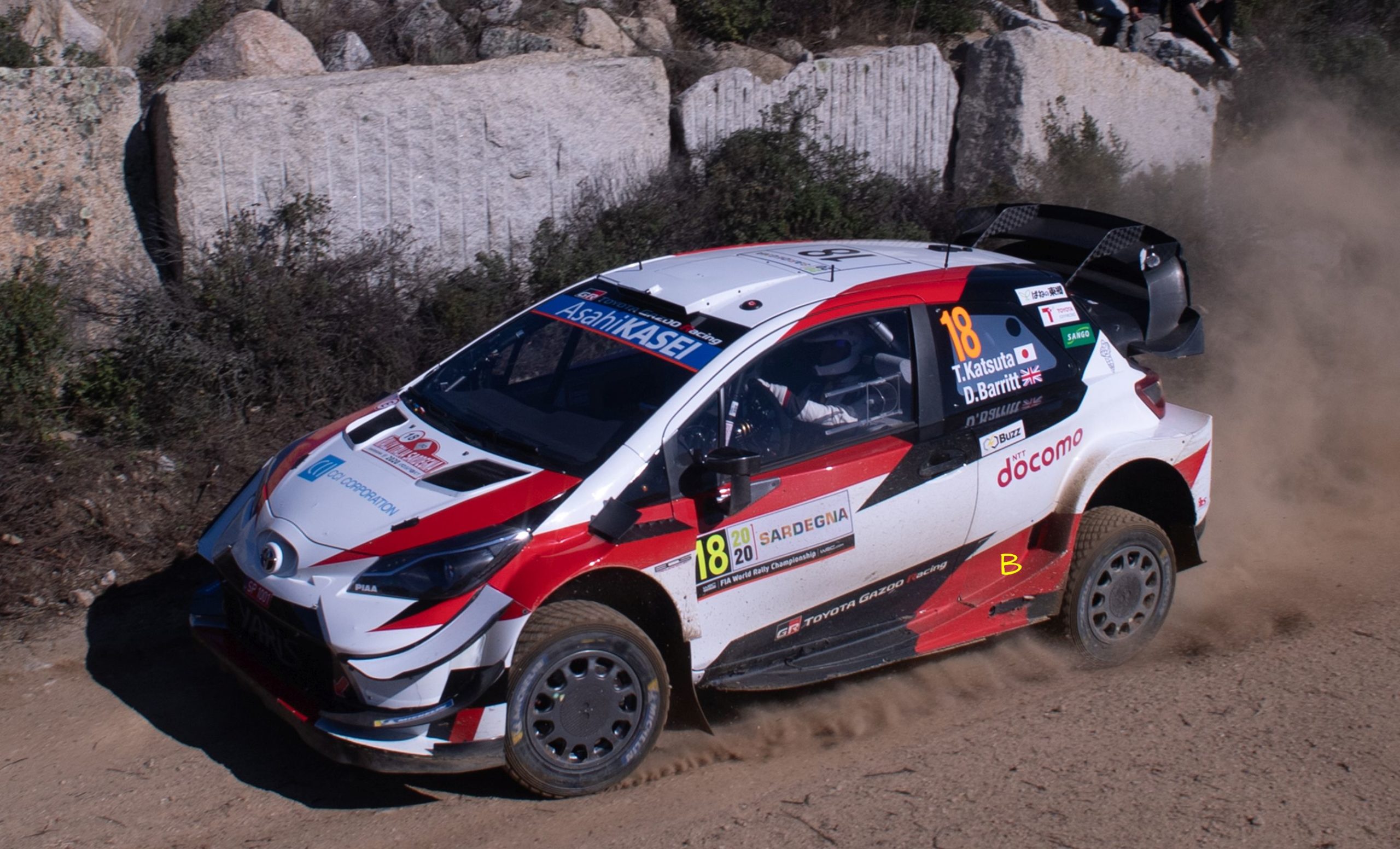 Hyundai junior driver Pierre-Louis Loubet declared in an interview with DirtFish.com last July that he still had some work to do to understand how the aerodynamics worked on fast stages after his Rally1 debut on Rally Stars Roma event. But, what he couldn’t possibly imagine is that an important part of his learning process would include how to drive a WRC car without most of the aero parts. And these lessons were taken last weekend in Sardegna. Codriven as usual by Vincent Landais, and at the wheel of an old spec i20 Coupé WRC aligned by Hyundai 2C Competition, the list of aero parts they lost is long: left side skirt, rear fenders, rear diffuser and part of the rear wing.

The first incident came on SS6 Tergu Osilo 1, when they lost the rear diffuser and rear fender vents. The result was a sudden loss of grip, especially at the rear of the car, due to the absence of a diffuser forcing the air to flow faster under the car, thus increasing pressure (and reducing downforce). 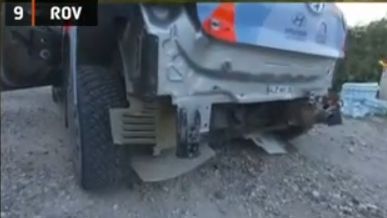 In SS7 -Monte Lerno 1 they lost the side skirt, and the result was that air could enter under the car, thus reducing the speed of air flowing in that area, which translated into higher pressure. The result was that less downforce was generated on the left side of the car, which led to reduced grip and imbalance of the car. 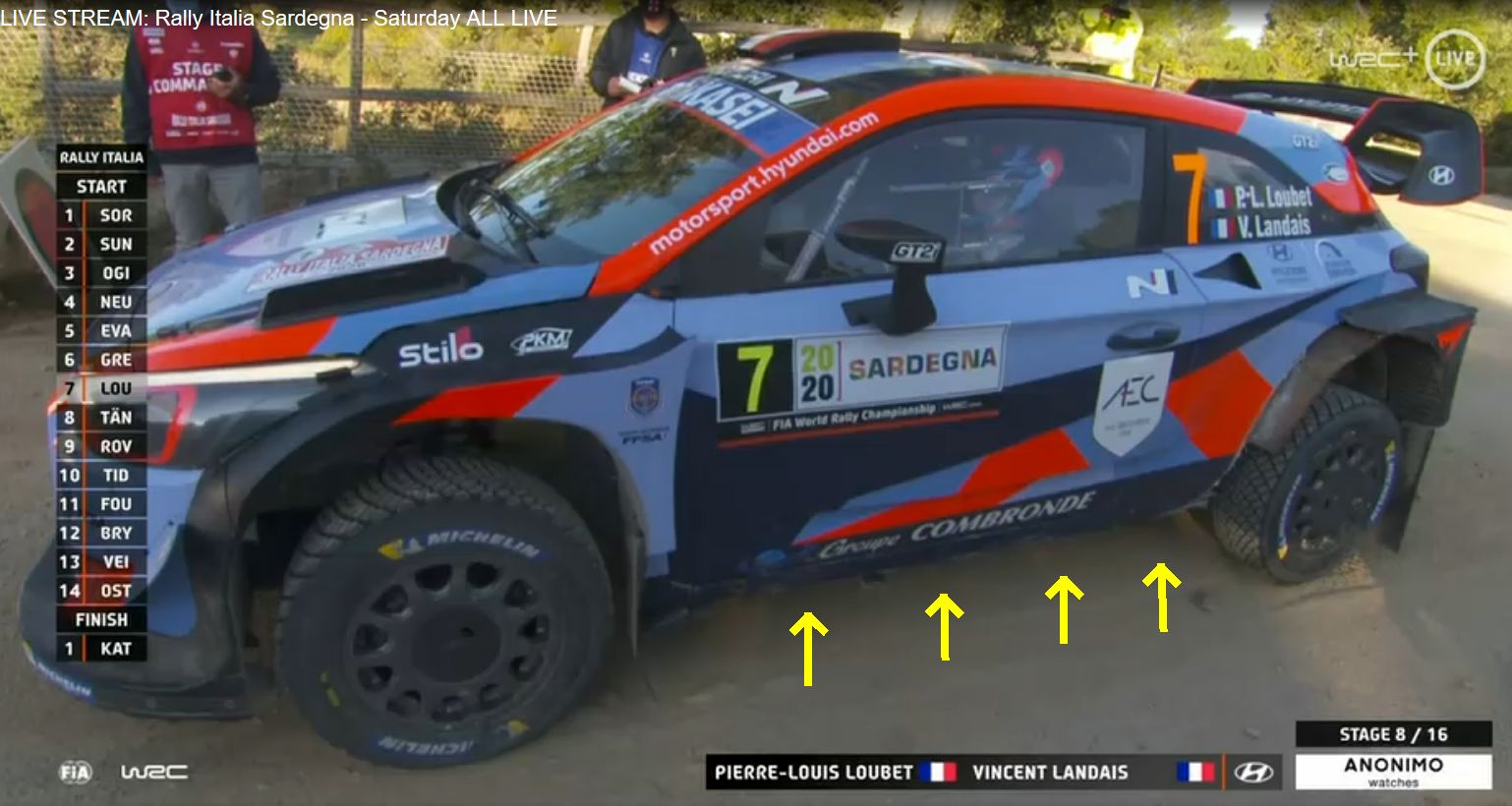 This effect was worsened by the loss of the left rear fender and rear wing left side in SS8 Coiluna Loella 1, leading to a totally unbalanced car. 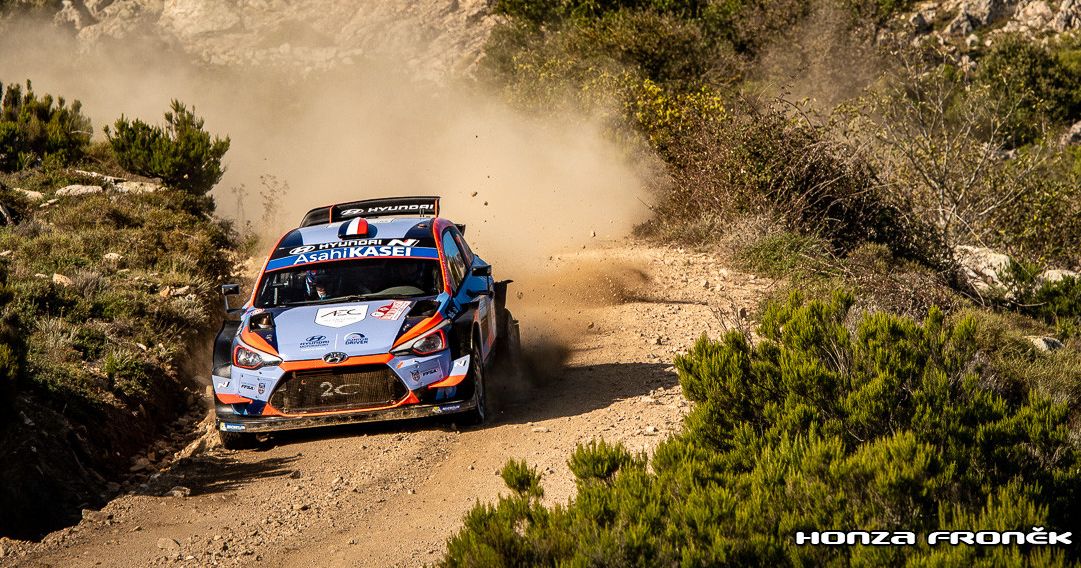 After losing so much aero parts, Loubet declared that “As much as these WRCs can be diabolical, as soon as you lose the aero, it becomes impossible to drive them. I felt like I was in the Andros Trophy all morning“. (Note: Andros Trophy is run over snow, so very poor grip).

The reliability of the aero parts played again a significant role in Sardegna for all teams. While Toyota front splitter seemed to behave a lot better over the Italian gravel (no losses observed), M-Sport was the team most affected by the damages at the front splitter. This is one of the pieces with higher stress under these conditions, as can be seen in the video below.

Time to get back to the action! 👊 #WRC #MSPORTERS #FordPerformance pic.twitter.com/467B5iM22p

The result was, once again, the loss of the front splitter for Suninen/Lehtinen, which possibly prevented them from continue setting exceptional times in the second loop of Friday morning.

It was expected that M-Sport would bring the new front aero modifications to Sardegna (as Wilson had announced some weeks ago) but, in the end, the team decided to postpone it. Maybe it was due to the short time the team had to prepare the cars at the workshop (just five working days) since they arrived from Turkey. But, surprisingly, Fourmaux had used them in Rally Legends one week before, while official cars have not used them in any official WRC event yet. Most probably, they will be introduced in Ypres in November. 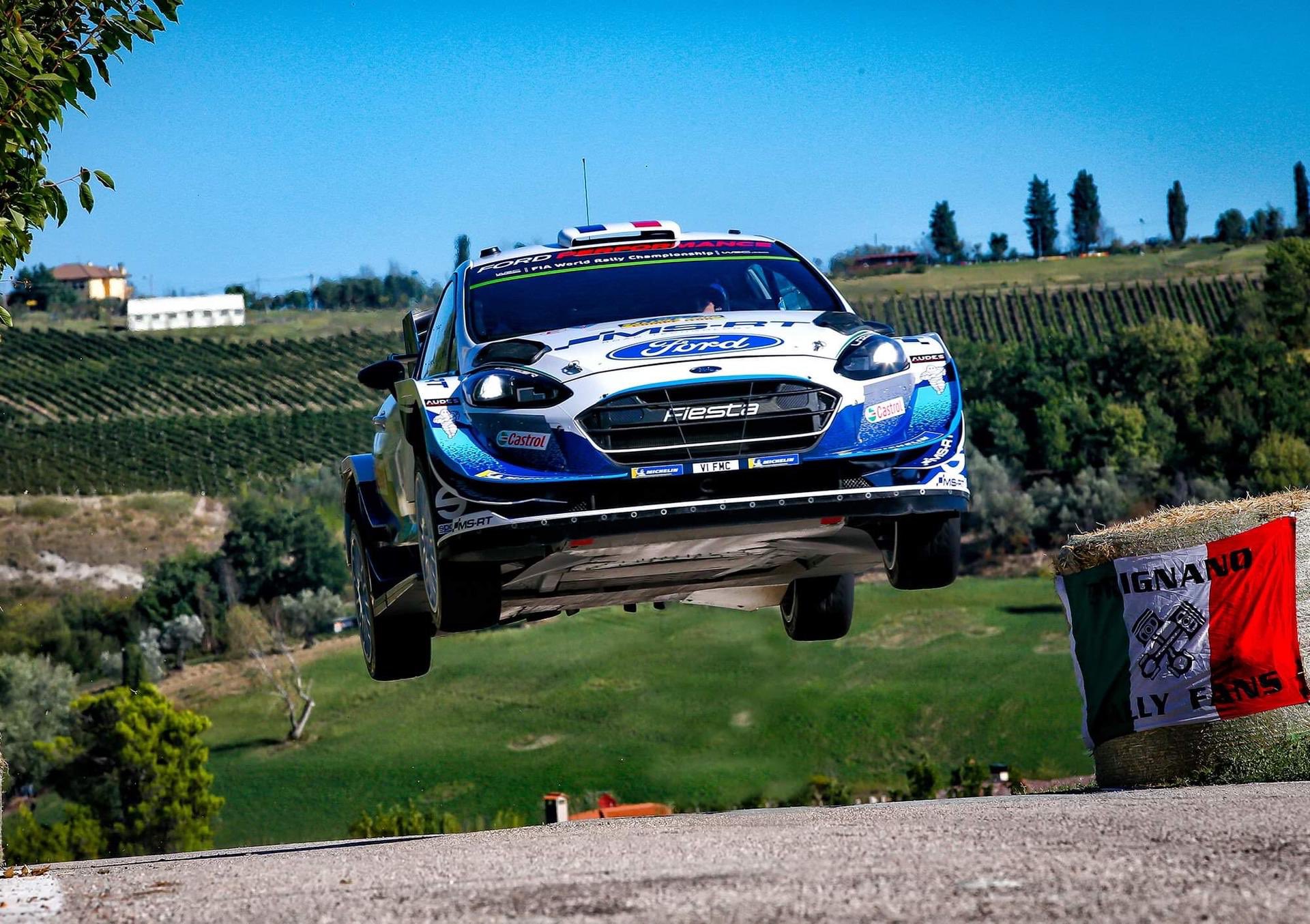 The modifications include the addition of small end plates on the dive planes, as well as the modification of the upper surface of the front fenders, as we reviewed in a previous post.

The results from the different stages of Rally Sardegna allow us to identify three groups of stages:

The results seem to indicate that Hyundai cars were more efficient at the slowest stages, while the Toyotas were more effective at the fastest stages. This is the trend already observed in previous seasons, before the last aero modifications introduced by Hyundai. But in Turkey Hyundai set the fastest times on the fastest stage (Kizlan, average speed around 110 km/h). The only conclusion to be drawn is that both cars seem to be at a very similar level under these conditions (medium-fast gravel stages). So, in the face of such equality, starting from such a backward position on Friday was probably the key factor in the Sordo/Del Barrio well deserved win… even at such high ride height as in the picture below. 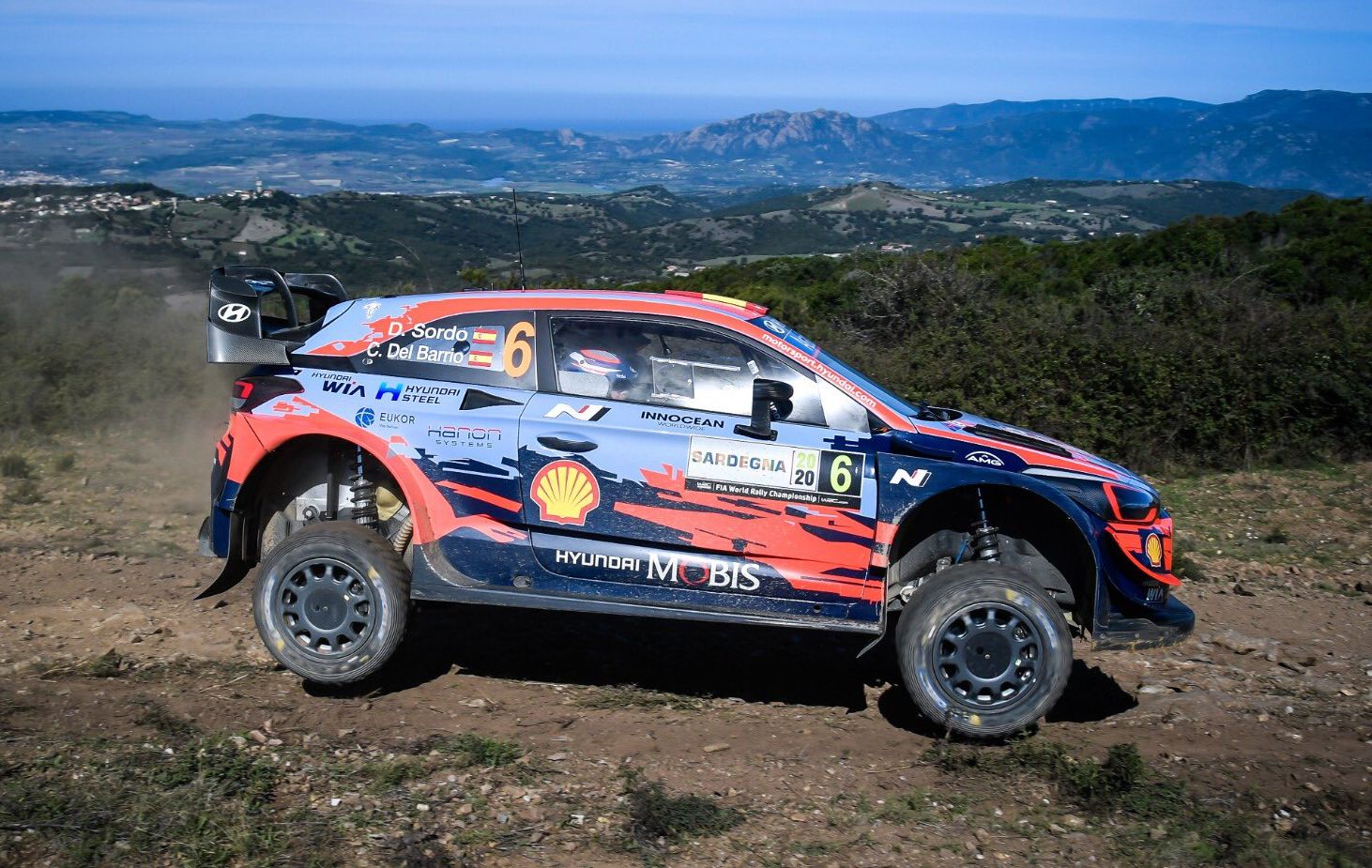