The Hyundai Kona EV rally car developed by Paddon Rallysport Group, Hyundai New Zealand and their partners and presented to the world last week showed not only a path to follow in terms of the electrification of rally cars, but also some original aerodynamic solutions that we will probably see in the future in other cars. Let’s take a close look at them, as it includes a different approach from what you would expect to find in a ‘normal’ rally car. 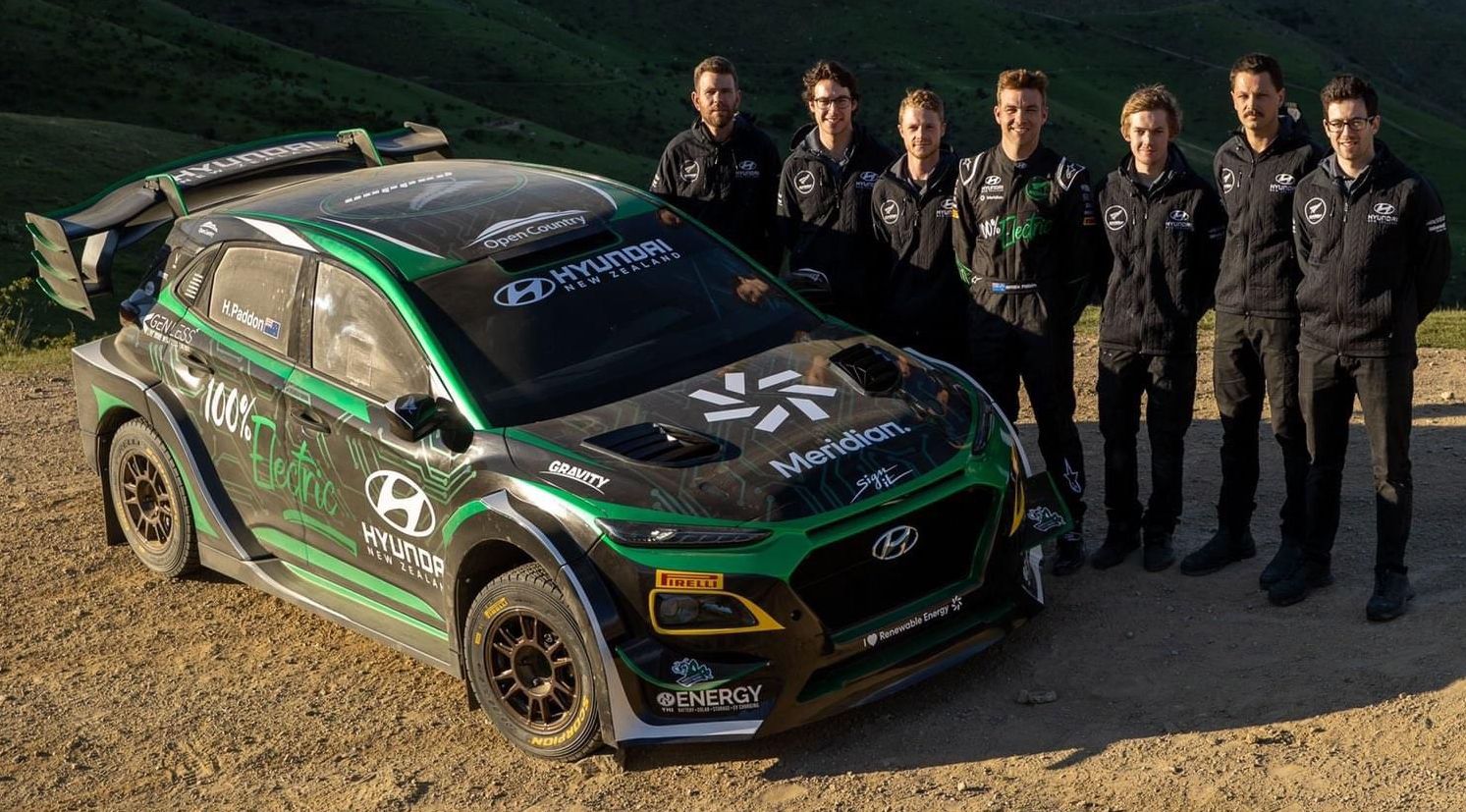 The design of the aerodynamics of the car has been developed by the University of Canterbury Motorsport (UCM), a group generated in that University which is behind other motorsport initiatives, with regular participation in Formula Student competitions as the most known. The team of the UCM includes a group of young and hugely passionate engineers responsible for the aerodynamics, testing and manufacturing tasks. They have also participated in the design of the chassis, together with Rory Callaway, Mechanical Design & Development Engineer at Paddon Rallysport. The car has been built at the workshop of the team located in Cromwell, and the total cost of the project is only 1,5 million dollars.

The design of the aerodynamics of an electric rally car must necessarily take into account the fact that the car is electric. That is, that consumption is significantly more important than in a usual (combustion engine) rally car. This means that not only downforce has to be acquired at the minimal drag cost (as it happens with the current WRC car generation) but drag has to be minimized as much as possible, even at the cost of losing some downforce.  And this is what the team of the UCM has achieved.

The first original aero solution proposed in the Paddon’s Kona EV is clearly introduced to reduce drag: the proposal of a roof scoop on the windshield. In opposition to normal rally cars, where the roof scoop is a separated part on top of the roof, the new air intake consists of a small orifice on top of the windshield. The consequence is a reduction in the front area of the car. As we know, drag depends on the front area as much as on the drag coefficient (Cx or Cd), so any reduction of the front area is good to reduce drag. But the solution is so good that it brings additional advantages: the absence of a protruded scoop means that air can flow over the roof without facing any disturbance. The result is that a cleaner, faster airflow reaches the rear wing, making it more effective in the generation of downforce.

And still a third advantage of this solution: the boundary layer is reduced. This is the layer created when air (or any other fluid) flows close to a surface, due to friction. This layer tends to increase in height along the surface. The higher the height of this layer, the higher the (friction) drag it generates. The removal of part of this layer done by the scoop means that the (friction) drag is also reduced. As a result, the new solution contributes to a significant reduction of drag, as well as an increase in downforce generated in the rear wing. A simple but very wise solution. 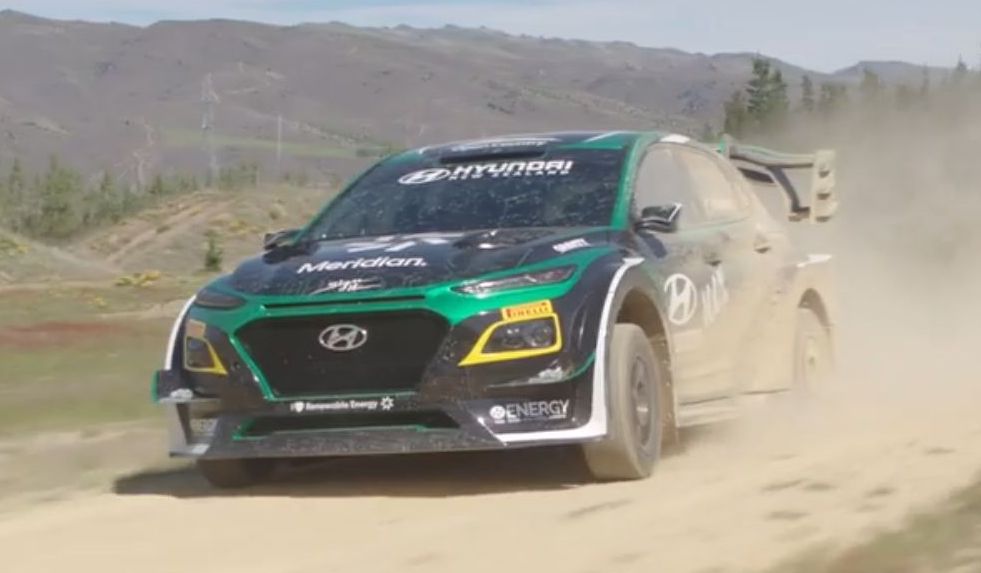 The second original solution is the design of the front splitter. Again, the search of minimal drag probably explains the rounded shape of the front splitter, in opposition to the straight lines in the front splitters of the current WRC contenders. Being an SUV car, the Kona suffers from a higher ride height than in usual WRC cars, for what it is possible that they have to finally add the usual vertical band below the splitter, to get a higher reduction in the amount of air flowing under the car. The reason why it has not been included is again to minimize drag.

Probably for the same reason (drag), the car includes only a single dive plane on each side of the front bumper. Still, the downforce at the front can be generated, while drag is not as high as it would be with two planes.

The third novelty introduced by PRG is the design of the rear wing. It includes a double-wing only in the area behind the body of the car, while on both sides of the car the lower plane has been relocated to the bottom side of the endplate. Again the search of minimal drag seems to be behind this design decision: the use of the two planes is limited to the rear of the car body, while on the (more exposed) sides, the wings have been separated, leading to less drag. Also, this design minimizes the perturbation caused in the air flowing on both sides of the car by the presence of the side mirrors. 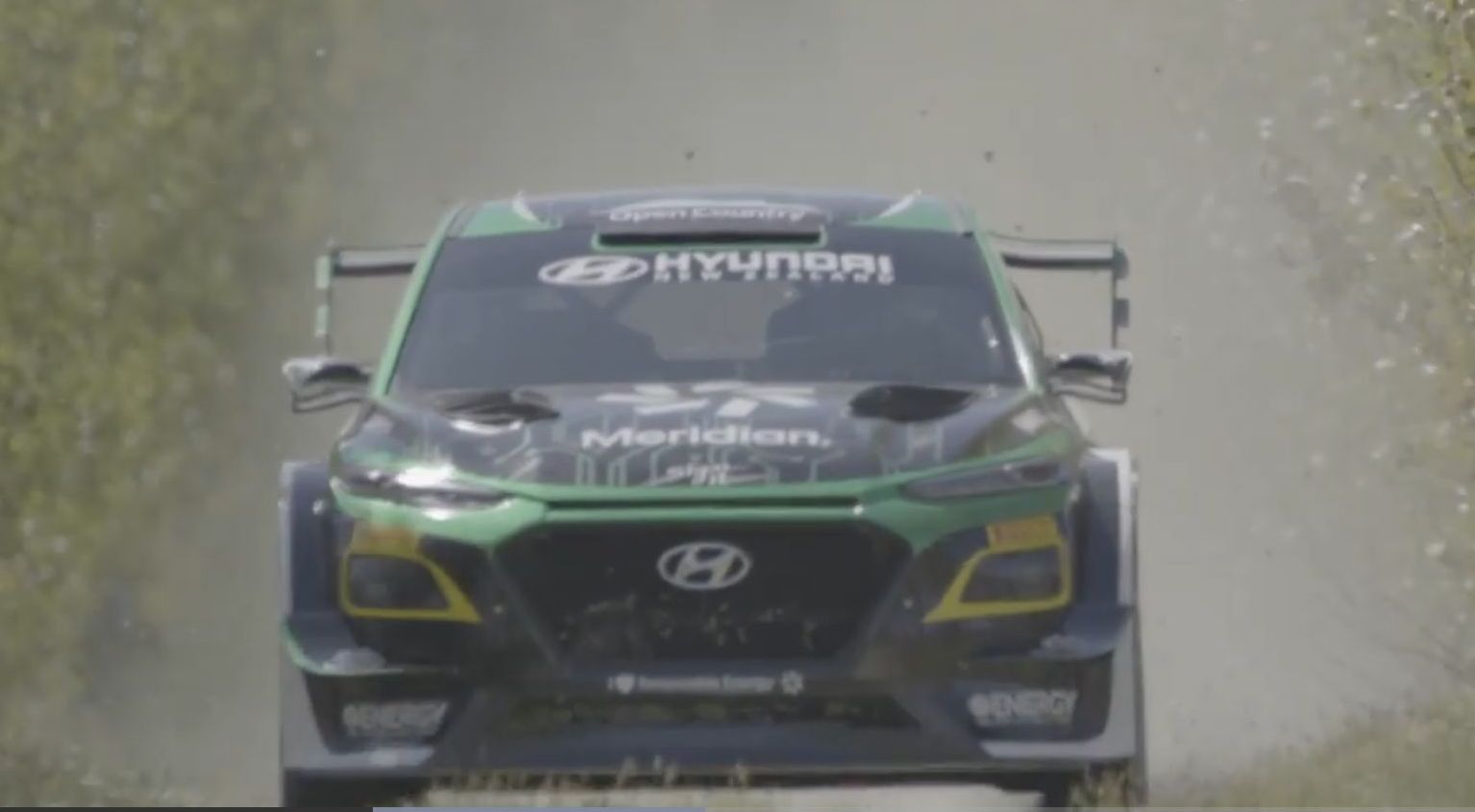 The separation between the two central wings is significantly smaller than usual in other WRC car rear wings. The reason behind is that WRC cars are only allowed to use a wing a lower plate, attached to the windshield, while in the wing of the Paddon’s car, the lower plate is not attached, and it acts as a second wing (which is not allowed in WRC by regulation). Locating it so close to the upper wing allows accelerating the air between the wings, as well as forcing some air to flow under the lower wing, increasing their efficiency in downforce generation. 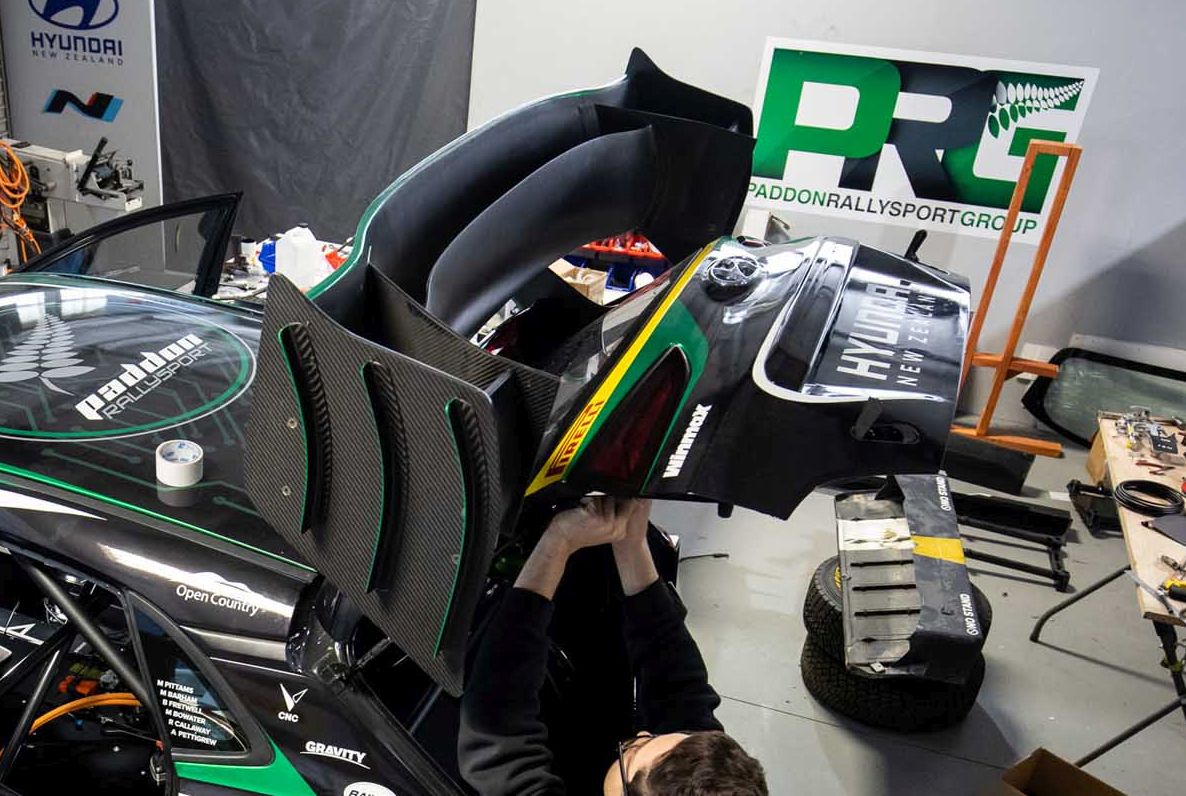 Another significant characteristic of the rear wing is the presence of three small wing profiles on the outer side of the wing endplates. Although very thin, they can contribute to the generation of downforce, by taking advantage of the air flowing on the external side of the endplates. The rear wing is supported by swan neck supports, which also act as vertical fins in the corners, taking advantage of the side airflow to generate additional load. This effect is improved because of the big size of the endplates.

All details have been considered during the development of the aero package. Even the design of the side mirrors has been optimized to generate some additional downforce, by introducing a double-wing under the mirror, similar to the original design seen in the Yaris WRC in 2017 (but forbidden by the FIA soon after).

The generation of downforce under the car is ensured by the presence of a rear diffuser. Even though the images available don’t show it clearly, it looks like to be the same diffuser design seen in the Hyundai i20 AP4++ also designed by Paddon and Hyundai New Zealand, that we already evaluated in 2018. It is also the same rear diffuser seen in the Hyundai i20 Coupe WRC between 2017 and 2019 but moved to a more retarded position. 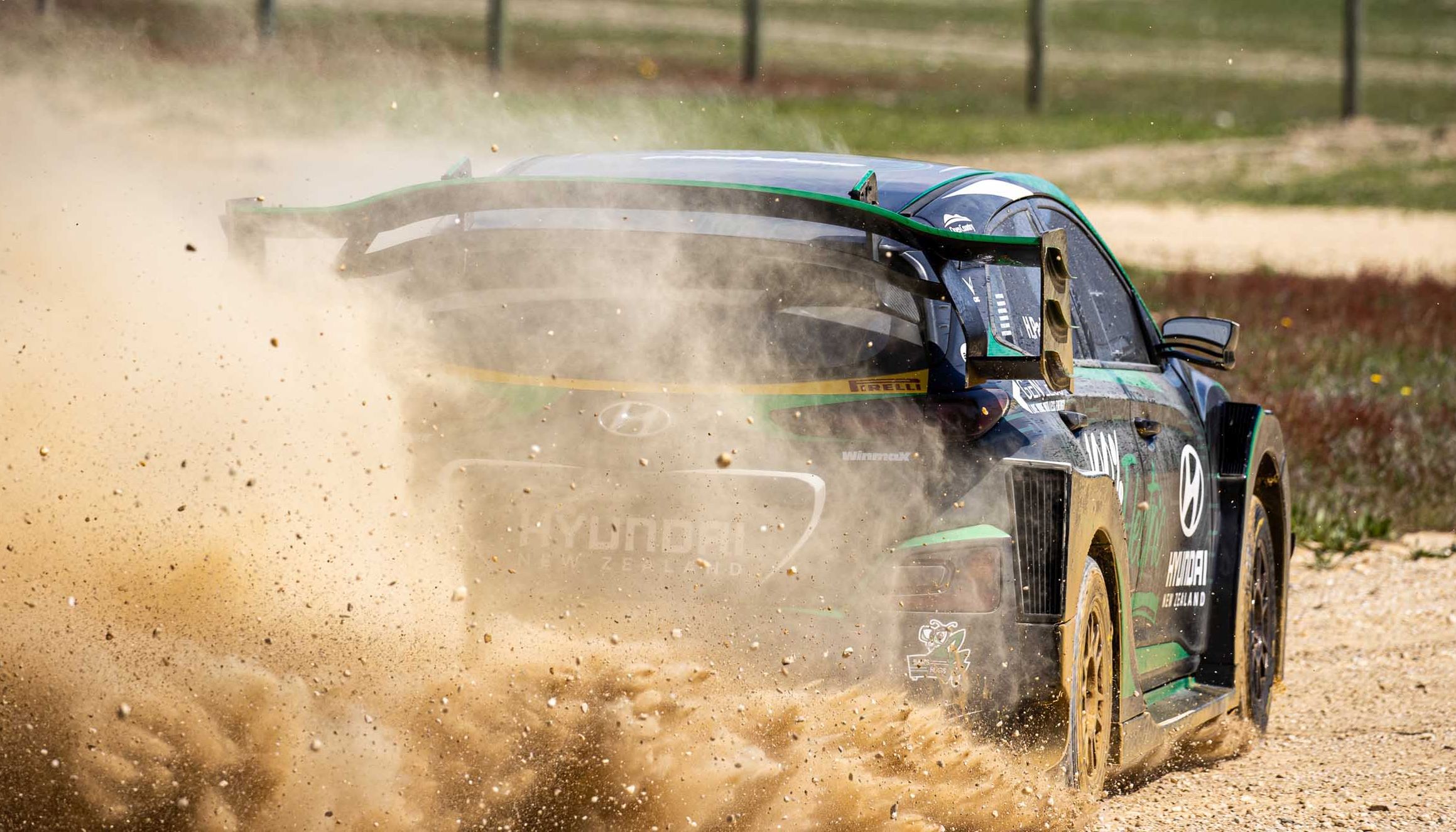 Both the front and rear fenders include vents for the removal of brake cooling air, which is also important to remove air from under the car, thus reducing lift. The rear vent follows the latest design seen in the official Hyundai WRC car, with the vents positioned in a vertical orientation. The higher number of vents significantly reduces the space for air removal, and allows an easier blocking by mud or snow. In order to prevent this, some modifications are expected to appear there in the next evolution of the car.

While no air intake for the rear brake cooling has been observed in the pictures available, the lower air intake in the front bumper shows two big orifices on both sides, most probably designed to bring cool air for the front brake cooling.

Internal aerodynamics have also been the object of significant efforts by the design team, as cooling is also an important issue for electric vehicles. The engine of an electric car has coolant jackets, but mainly to remove the excess heat. The main object of cooling in an electric car is the battery pack. Discharging the battery generates heat, and batteries need to work in the right operating temperature, for what cooling must be adequately designed. 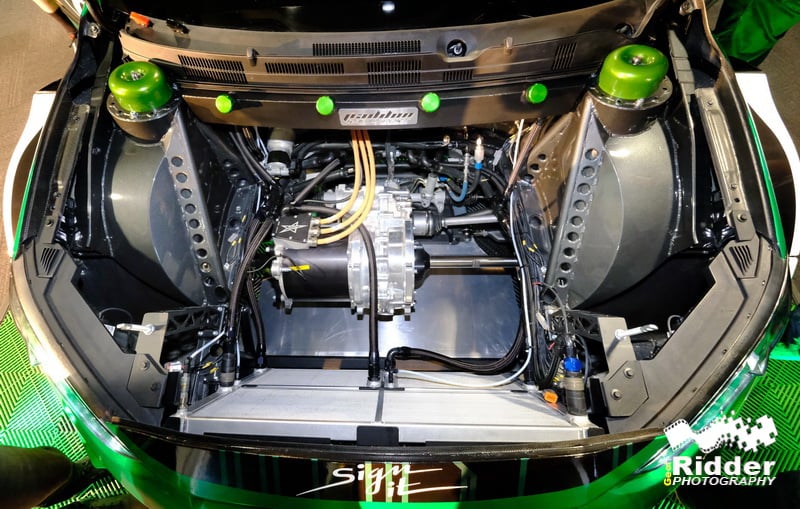 The pictures facilitated by PRG show the use of a big radiator behind the front air intake. This radiator has two parts: the left side is used for cooling the front engine (the Kona in its rally version has two engines, 220 kW or 295 CV each) as shown by the pipes on the left side of the picture. The pictures available do not allow us to determine whether the right part of the radiator is used for the rear engine or for the battery pack cooling. Radiator air removal from the engine bay is done through the two big vents located on both sides of the bonnet. 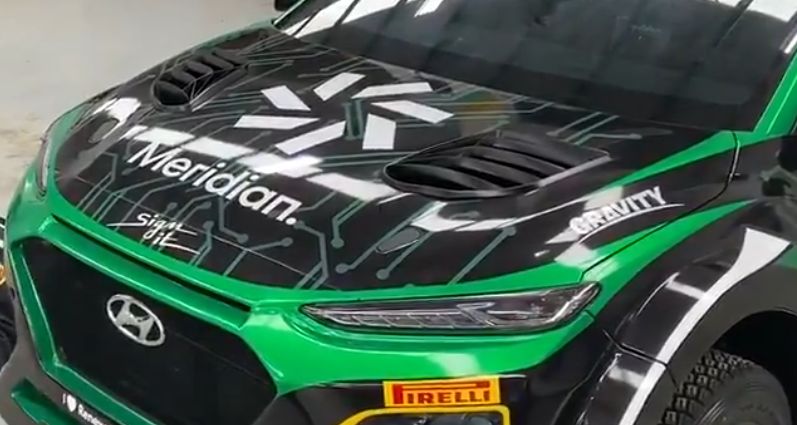 As in the Kona electric road car, the batteries are located under the car (under the metallic plate seen in the picture). The heat is removed through cooling channels built around the battery packs, with the aid of a cooling fluid, which is cooled down with air in any of the radiators of the car.

In summary, an excellent and very specific job developed by PRG and UCM, which proves that they have been able to propose new solutions that soon can be seen in the WRC, not only on the latest electric technology, but also in an older and more developed science such as aerodynamics.