In the first article of the series devoted to wind tunnels, we reviewed the role of these facilities in the history of WRC, from the 70s to 2016. It’s time now to review the role they have had on the current WRC car generation, from the initial design steps to the continuous development of the different evolutions of the cars.

For the initial design of the 2017 WRC car generation, most of the manufacturers followed the classical design route: after the initial design is completed, the flow around the car and the forces it generates are modeled and numerically simulated through CFD software, usually commercial packages such as Ansys/Fluent or Star CCM+ or open-access software such as OpenFOAM. Once the numerical results are satisfying, a scale model is built for its evaluation and fine-tuning in the wind tunnel.

The use of scale models in the early stages of development presents multiple advantages: it is easier to work with (and to modify) scale models, and they can be prepared even before any full-scale model is available. Also, the number of scale facilities available is higher than the full-size, and they’re cheaper.

The evaluation of the Citroën C3 WRC was carried out at the R.J.Mitchell wind tunnel of the University of Southampton (integrated in the UK National Wind Tunnel Facility), with a 40% scale model. The R. J. Mitchell wind tunnel is a large and extensively equipped low-speed wind tunnel with a 3.5 m x 2.4 m (11’x 8’) working section and a maximum wind speed of 144 km/h (90 mph). Like all the other wind tunnels we will mention in this article, it is equipped with a moving ground, with the belt rolling at the same speed as air does inside the wind tunnel, to match the real conditions the car will face in a rally stage

Citroën C3 WRC scale model at the R.J.Mitchell wind tunnel of the University of Southampton, 2016 – picture extracted from the video Citroën C3 WRC – The Genesis, by Citroën Racing

Even at a small scale, the models contain as many details as possible, to allow optimal reproduction of the future car at full scale. 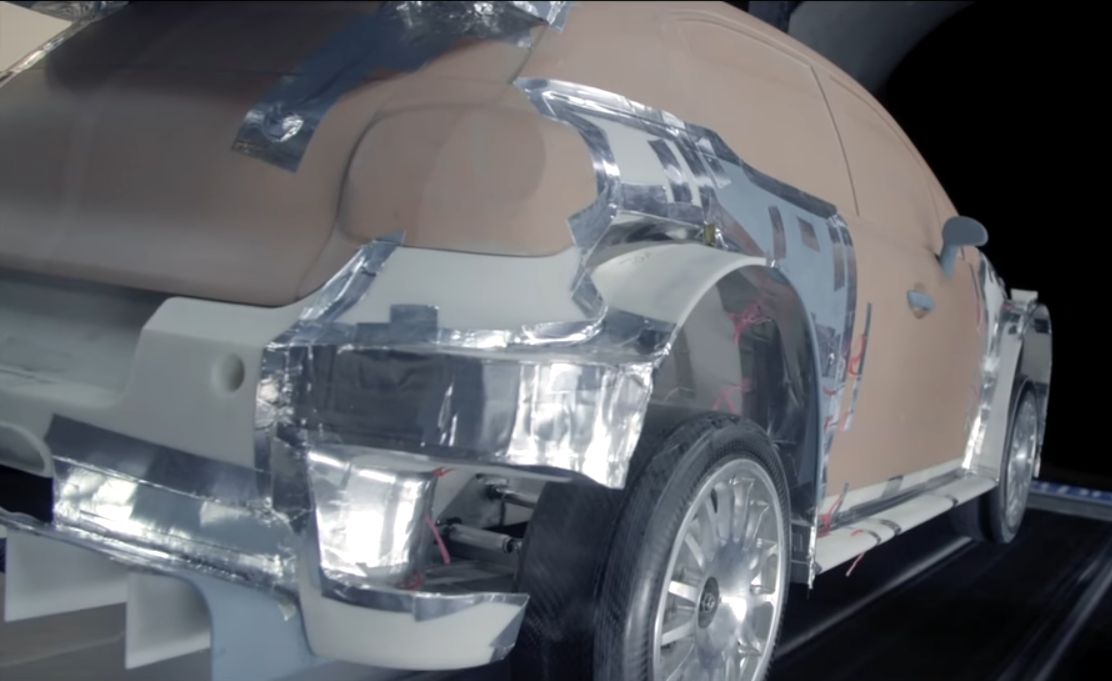 Another curiosity shown in this video shows is the study of alternative solutions for the C3 WRC, such as a small dive plane ahead of the rear wheels, similar to those of the Fiesta WRC. The video confirms they were considered but discarded. 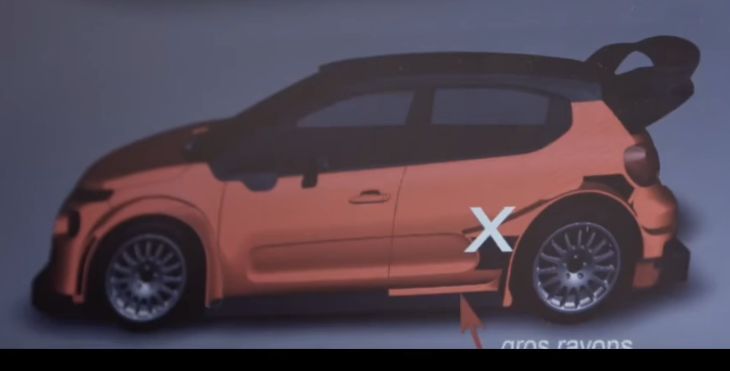 For the initial aero evaluation of the Toyota Yaris WRC, Tommi Mäkinen’s team selected the Petronas AMG wind tunnel (max. wind speed of 173 km/h or 107 mph) of the Mercedes F1 team, located at Brackley, also with a 40% scale model. The models used included also all types of details, as well as solutions that were discarded after the tests, such as the extended plates exiting from the rear fender vents shown in the image below. 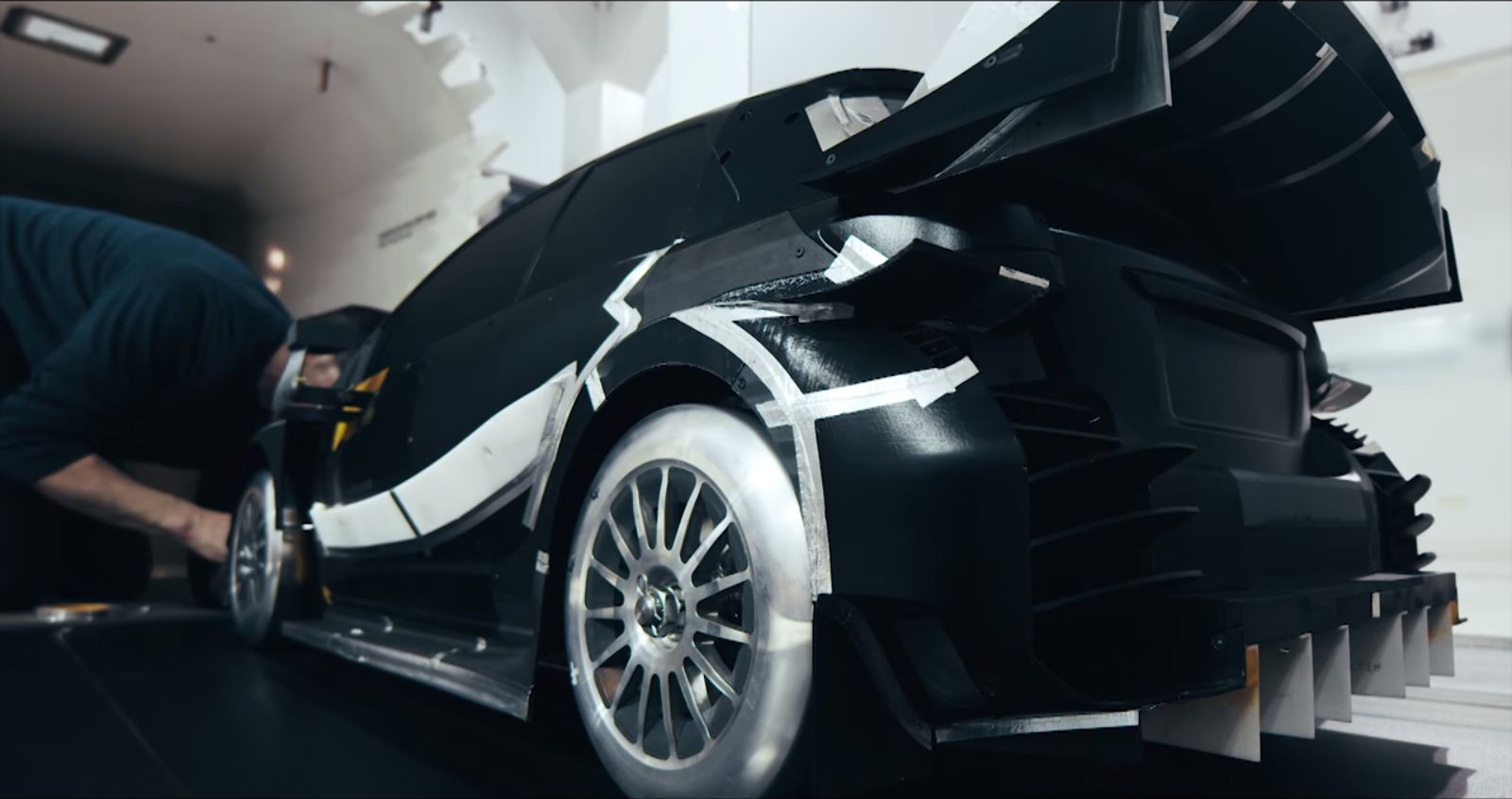 Once the design is refined with the scale model, the next step is the evaluation of the full-scale car at the wind tunnel. At this stage, bigger and more expensive facilities are required. Also, the number of adequate facilities is reduced, due to the requirements in size, power (required to reach airspeeds above 200 km/h) as well as additional elements such as a moving ground. This element is required for vehicles with low ground clearance, such as rally cars (in tarmac configuration), to minimize uncertainty during the assessment of their aerodynamic performance.

We found no evidence that Hyundai used scale models during the design of the Hyundai i20 Coupé WRC, but the full-scale car was evaluated at the Hyundai’s wind tunnel available at the Namyang R&D Center (max. wind speed 200 km/h or 124 mph). There are only a few images available from this facility, so we recommend you to visit it and to know a wind tunnel in detail, just by clicking on the great video below (by JP Performance).

Video of the Hyundai wind tunnel at Namyang R&D Center, by JP Performance

The initial development of the VW Polo WRC 2017 was carried out in 2015 at the wind tunnel available at Volkswagen facilities in Wolfsburg. However, due to the lack of moving ground, most of the tests were developed at the wind tunnel of the Research Institute for Automotive Systems and Vehicle Engines (FKFS) of the University of Stuttgart (max. wind speed 260 km/h or 162 mph).

M-Sport opted for the most radical design alternative: the aero package of the Ford Fiesta WRC was designed only with the support of numerical simulation (CFD) techniques. The reason why was the short time they had to complete the process, as the details of the new evolution of the Fiesta road car (on which it was based) only arrived in June 2016, just seven months before the first event of the 2017 season. Thus, they built the car only with the information obtained from the numerical results. Obviously, they tested it in real stage roads (like all the other teams) but still, they had skipped an important part of the design process.

Even so, the design proved to be really efficient, as the car won the 2017 season opener event (Monte-Carlo) as well as the two World titles (Drivers and Manufacturers) that year. 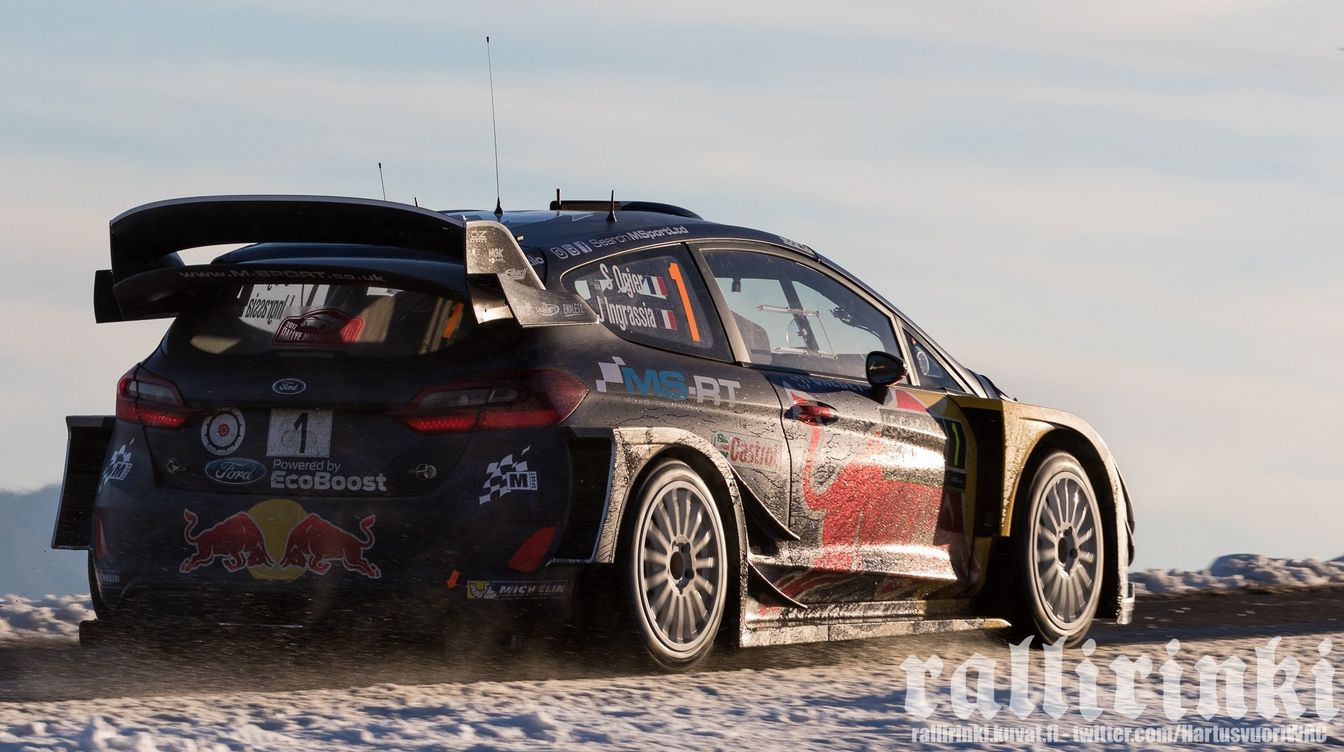 It was not until one year later when M-Sport finally developed the validation of the (CFD) numerical results in a wind tunnel. Thanks to the increased support from Ford Performance, one of the units of the Fiesta WRC aligned in Rally Mexico 2018 was sent to Concord, near Charlotte, NC (USA), to the Windshear wind tunnel (290 km/h or 180 mph). This facility, where Ford Nascar models are usually evaluated, allows the cars to be positioned at different slip angles, for optimal reproduction of the conditions that a rally car faces on a stage. There, under the supervision of Ford Performance aerodynamic engineers, the Fiesta WRC design was validated, as we reviewed in a previous post about this test.

Once the car is competing, the wind tunnel evaluation is usually done with full-size models. allowing better reproduction of real conditions…but at a higher cost, and with the added problem of a reduced range of facilities available. The reason is that an optimal evaluation of a full-size car requires an optimized wind tunnel, with moving ground and variable slip angles, to assess aerodynamics during cornering, and there are not many facilities with all these features available. 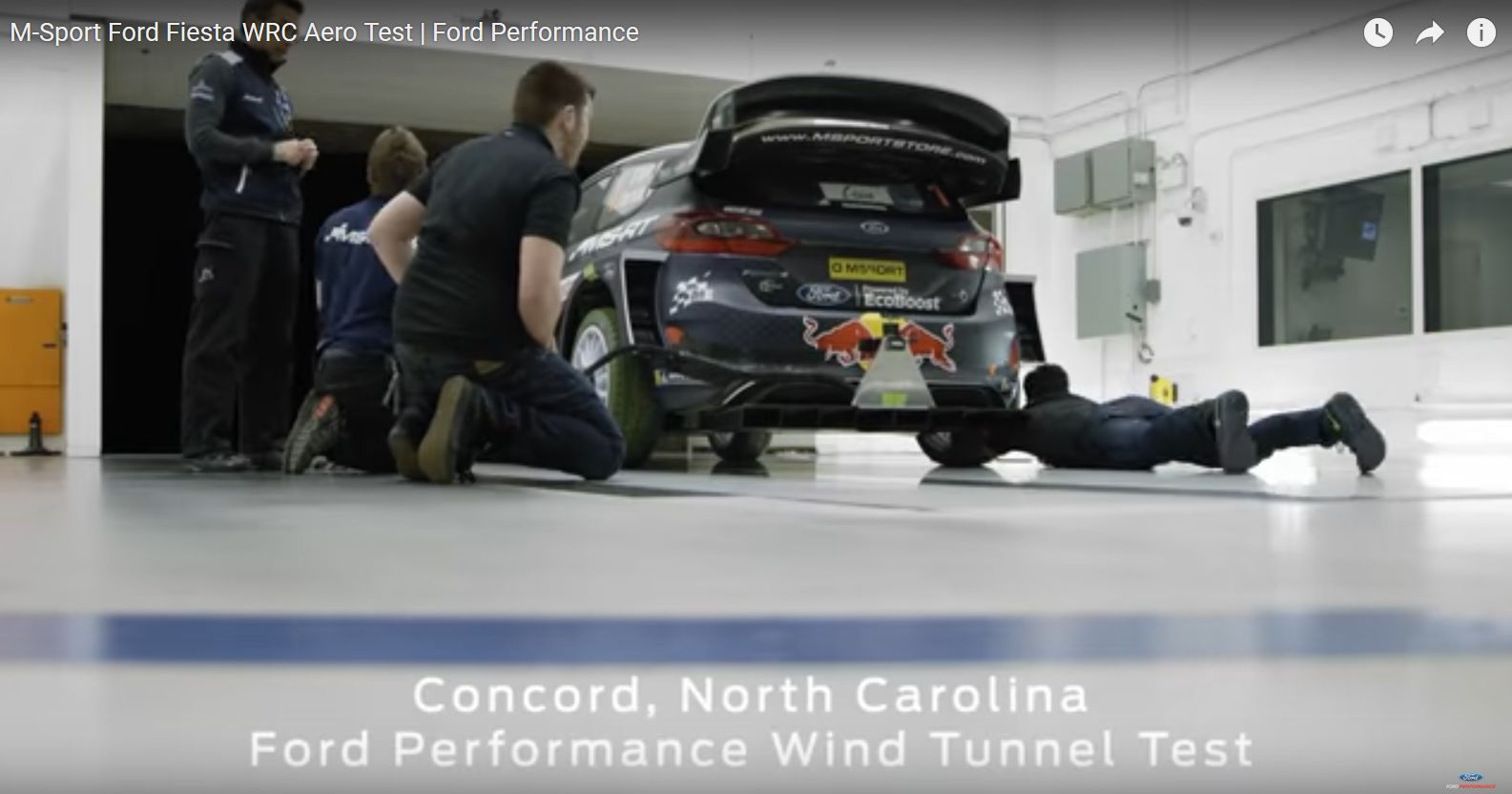 The Ford Fiesta WRC evaluation of the car made in the Windshear facilities had a second goal: to evaluate new modifications of the aero package of the car, such as the modified rear aero package that was introduced in the Fiesta WRC of Ogier/Ingrassia in Rally Finland 2018. 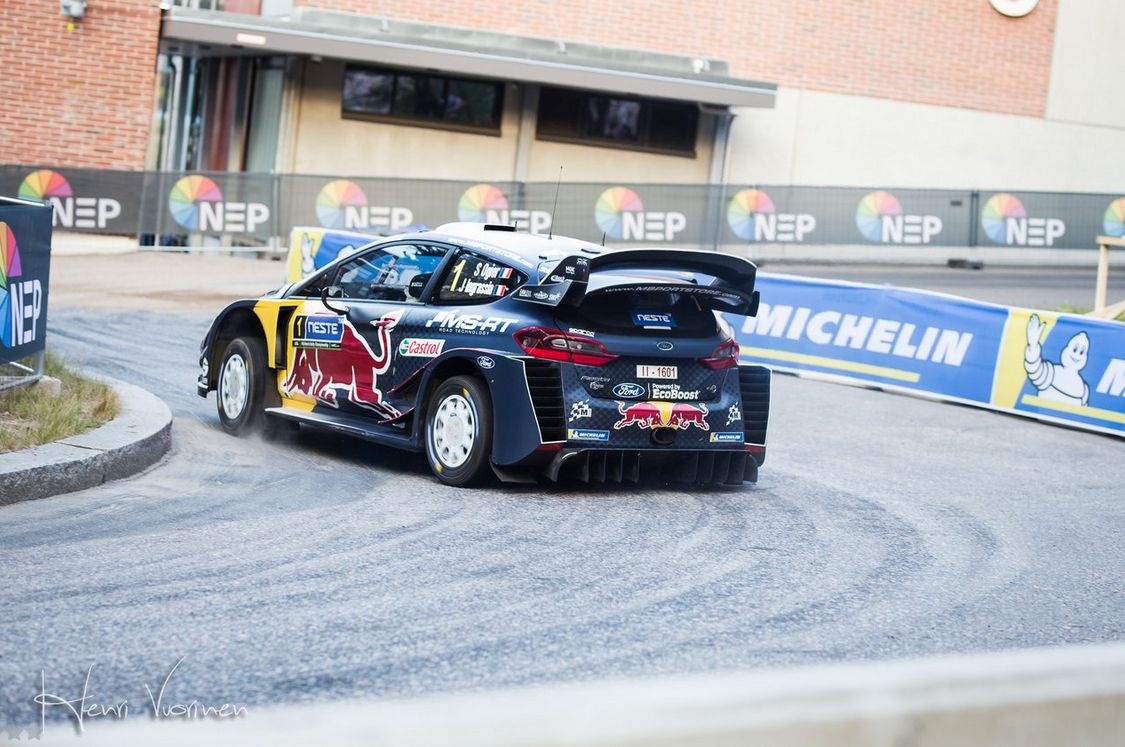 Toyota has also validated in the wind tunnel most of the modifications implemented in the car. This is the case of the new front aero package of the Yaris WRC, which was validated at the wind tunnel of Toyota Motorsport GmbH in Köln, Germany (max. wind speed of 252 km/h or 157 mph), with a full-size car, in August 2018. The validation was done several months after the introduction of the new aero package in the car, which took place in January 2018 in Rallye Monte-Carlo. 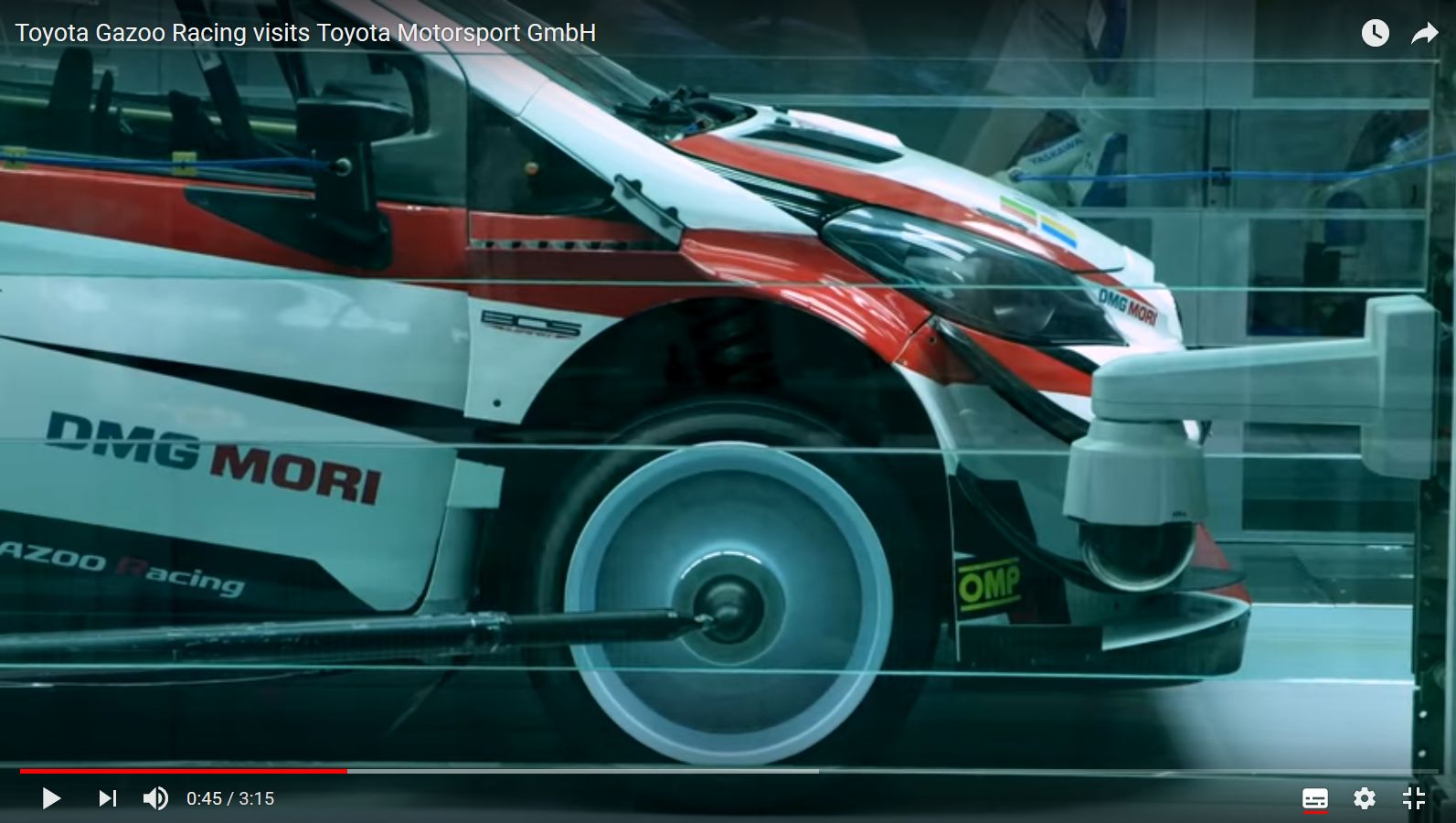 The latest aero modifications homologated for the Yaris WRC were again evaluated at the Mercedes F1 Petronas AMG wind tunnel, with a scale model, as shown in this video by Mercedes and in the pictures below. 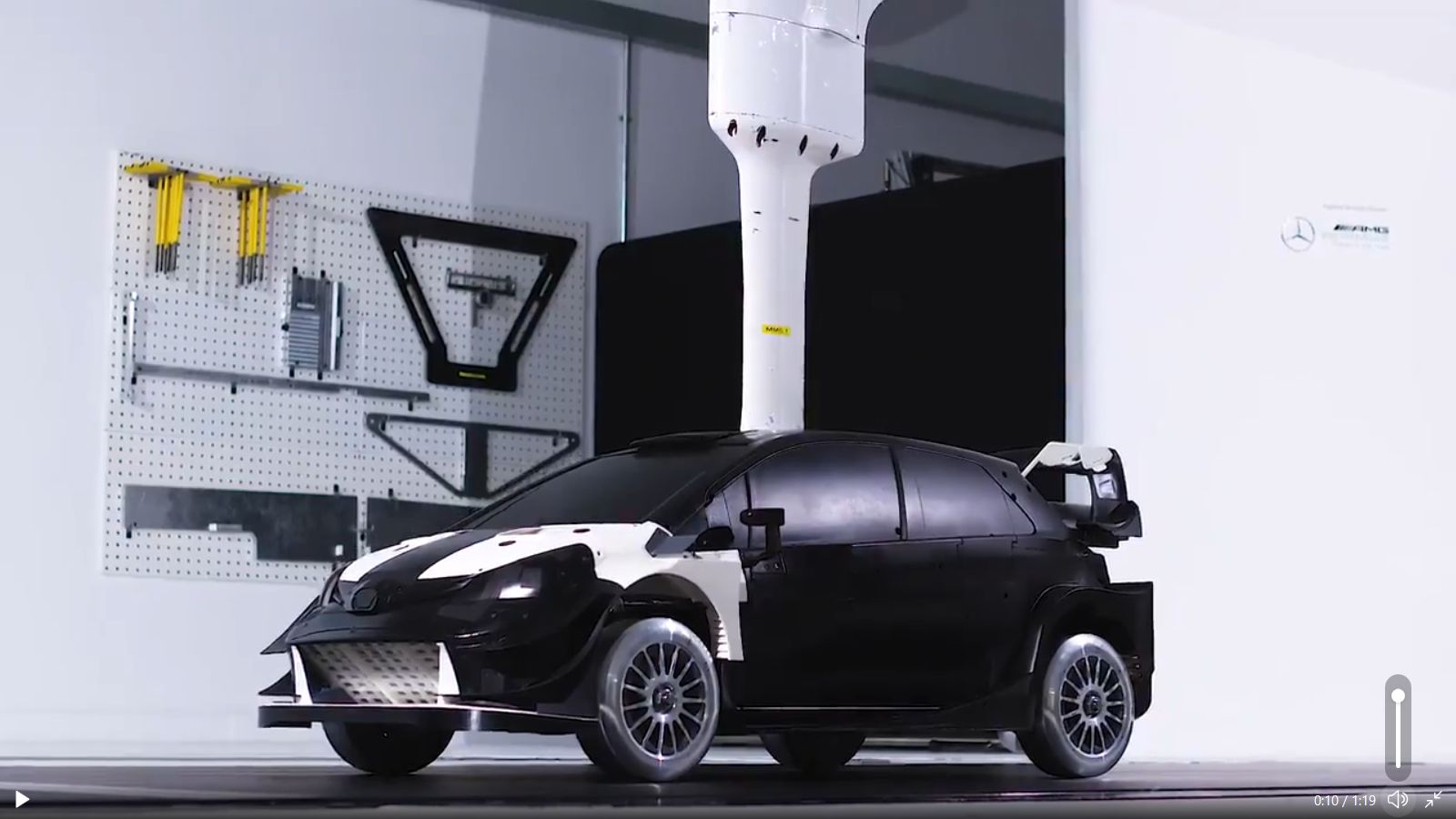 The pictures show the scale model used in 2019 to evaluate the new design of the rear wing, which was homologated in September 2019 and introduced in Rally Turkey that year. 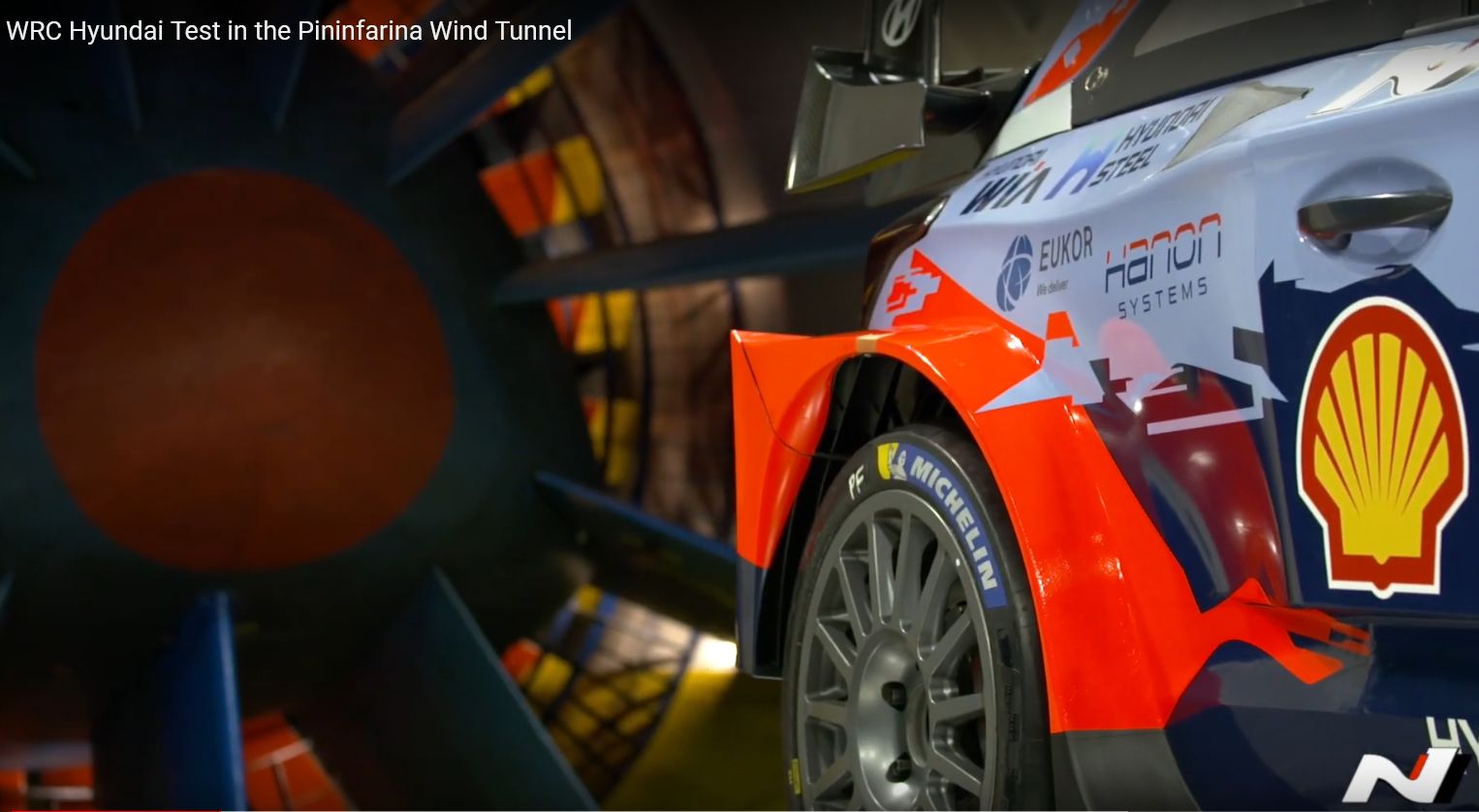 Also, Hyundai has validated the complete redesign of the latest aero package of the i20 Coupé WRC in a wind tunnel in 2020. Surprisingly, not only at Namyang facilities but at the historical wind tunnel of Pininfarina (250 km/h or 155 mph), also with a full-size car.

In short, the role of wind tunnels in the design and development of WRC cars remains as important as it has been in the past. So they must be very busy at the moment working on the design of the new generation of WRC cars for 2022.

If you’re interested in learning how a wind tunnel works, we recommend you to watch these great videos: