This post is dedicated to the memory of the great Hannu Mikkola. RIP

The first edition of the Arctic Rally Finland represented not only a great event with very spectacular images but also a technical challenge for all teams, due to the specific conditions. We reviewed the impact of low temperatures and ice build-up on the car’s performance before the event. Now, once completed, some technical details are worth reviewing.

Despite the ambient temperature was above expectation during the event, some specific solutions could be seen, such as the different blocking plates in the front grills. The image below shows not only the front grill protection that reduces the air entering into the engine bay but also the reduced size of the bonnet vents used by Toyota (as less air has to be removed) while preventing snow to enter the engine bay in the event of the car colliding head-on with a snowbank. 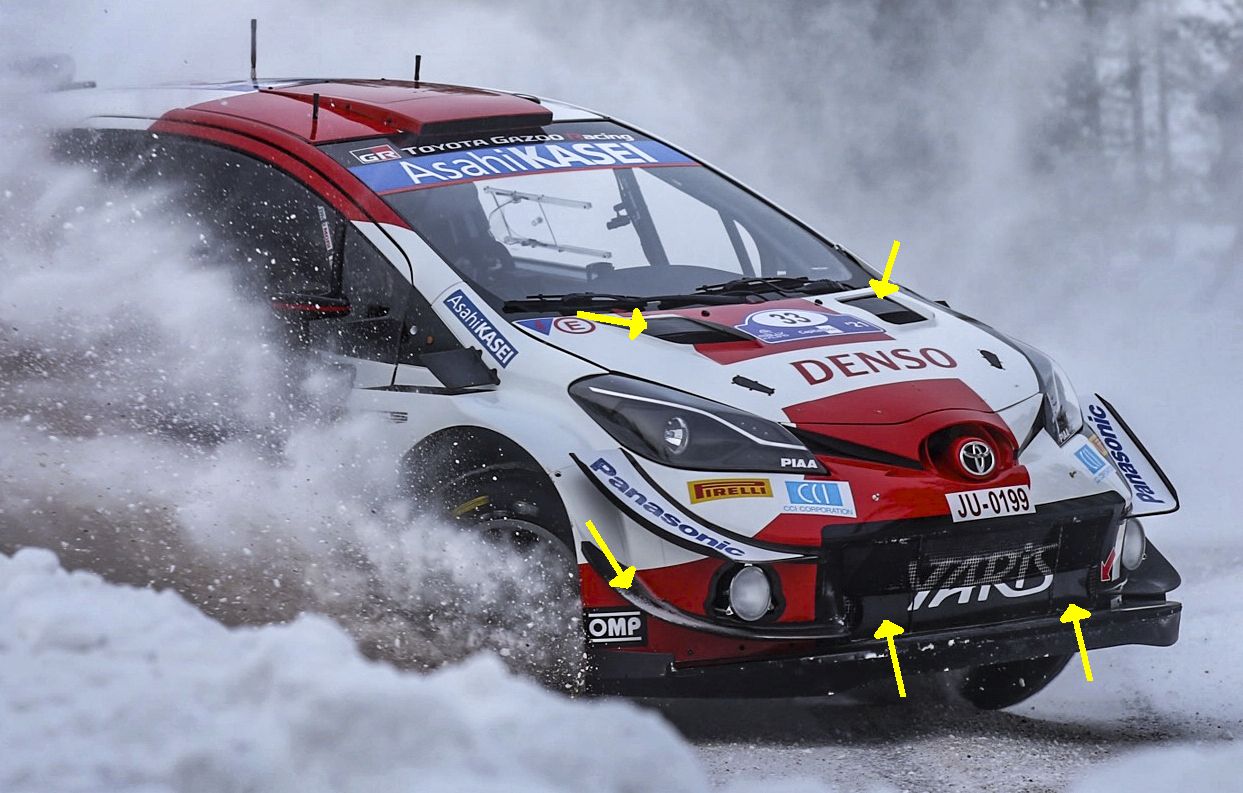 The image also shows (same as in the picture below) how some ice was accumulated on the lower dive planes of the Toyota Yaris WRC, increasing the roughness of the surface and leading to some more drag. 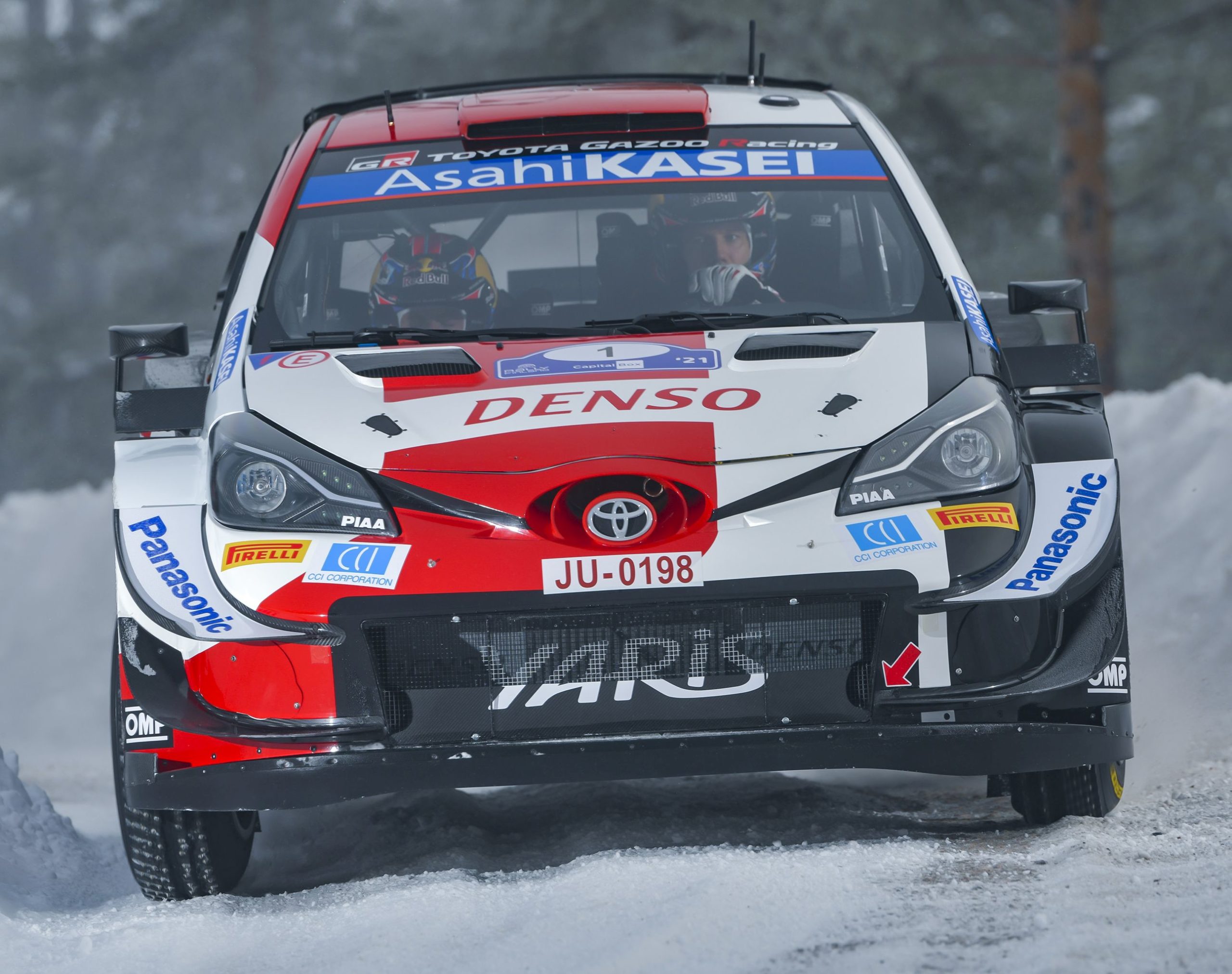 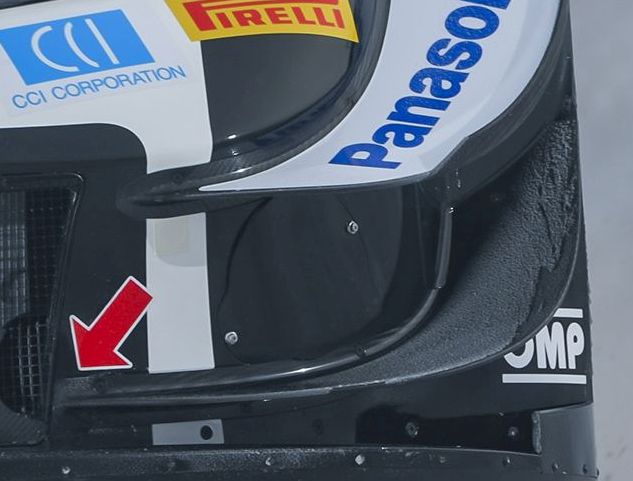 Another solution for the low ambient temperatures was the blocking of rear brake and transmission air intakes, in order to avoid excessive cooling causing poorer performance of these elements. The image below shows how Toyota and Hyundai blocked these intakes during the event. 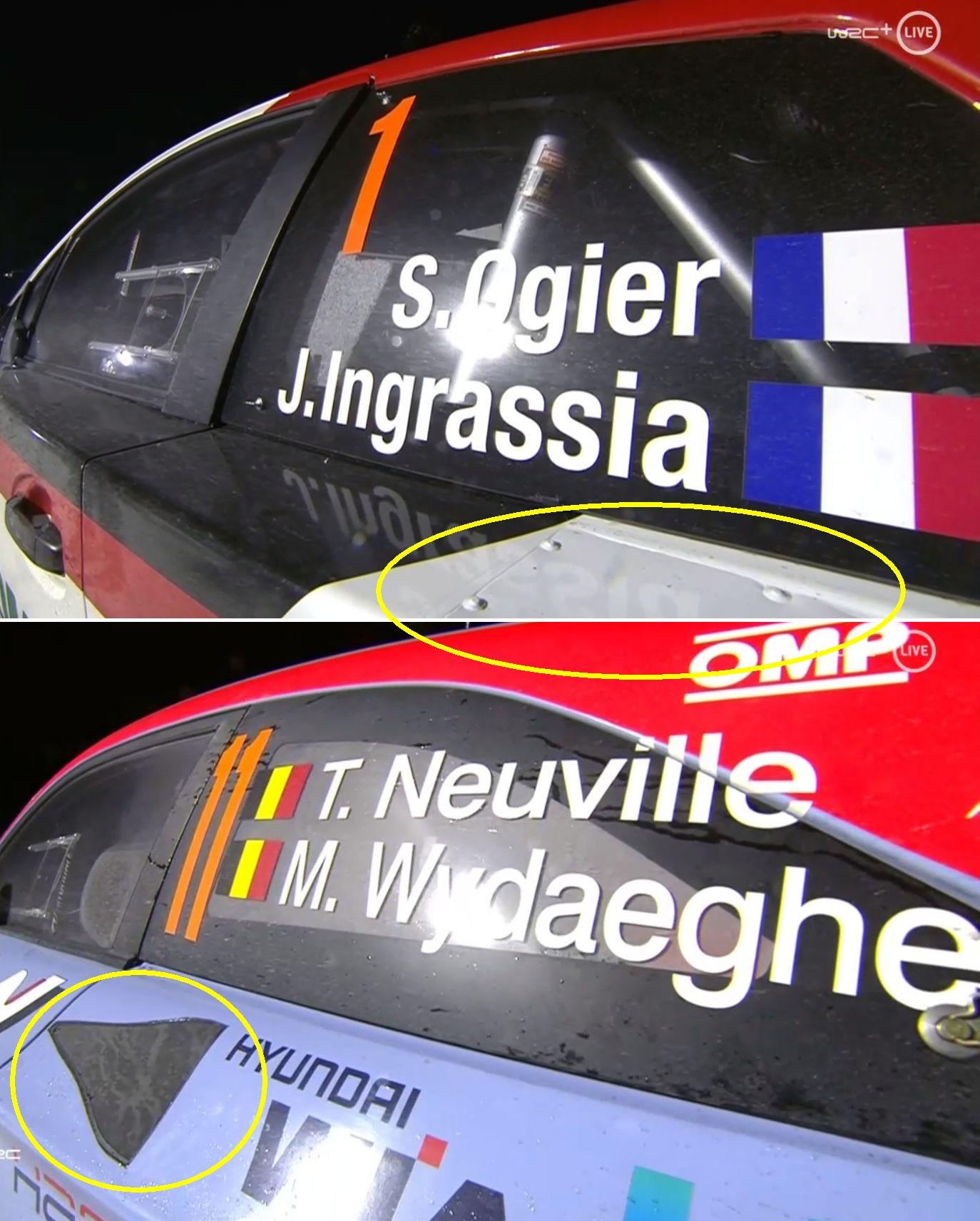 The presence of snow in all stages forced the teams to block the rear fender vents, in order to prevent snow accumulation that would cause extra weight and made them ineffective in their main function: removing the air from the wheel space, thus releasing pressure. Teams and drivers opted for different blocking strategies: from total blockages, such as Bertelli/Scattolin to different degrees of blockage in the Yaris and the Fiesta and no blockage in the Hyundai.

The result was that still snow was accumulated in the rear fender vents, no matter the strategy used. The image below shows how the Yaris WRC of Rovanperä/Halttunen and Evans/Martin ended up full of snow, even though the different blocking strategy.

In the case of the Hyundai, the cars run most of the time without rear fender vents. The central part, containing the big vertical strakes easily detached from the car when hitting the snowbanks, leaving a big hole in the center of the rear fender, such as shown in the left image below. The lower vent also was often lost, because of the snowbank use, leaving the Alzenau cars with no fender vents. 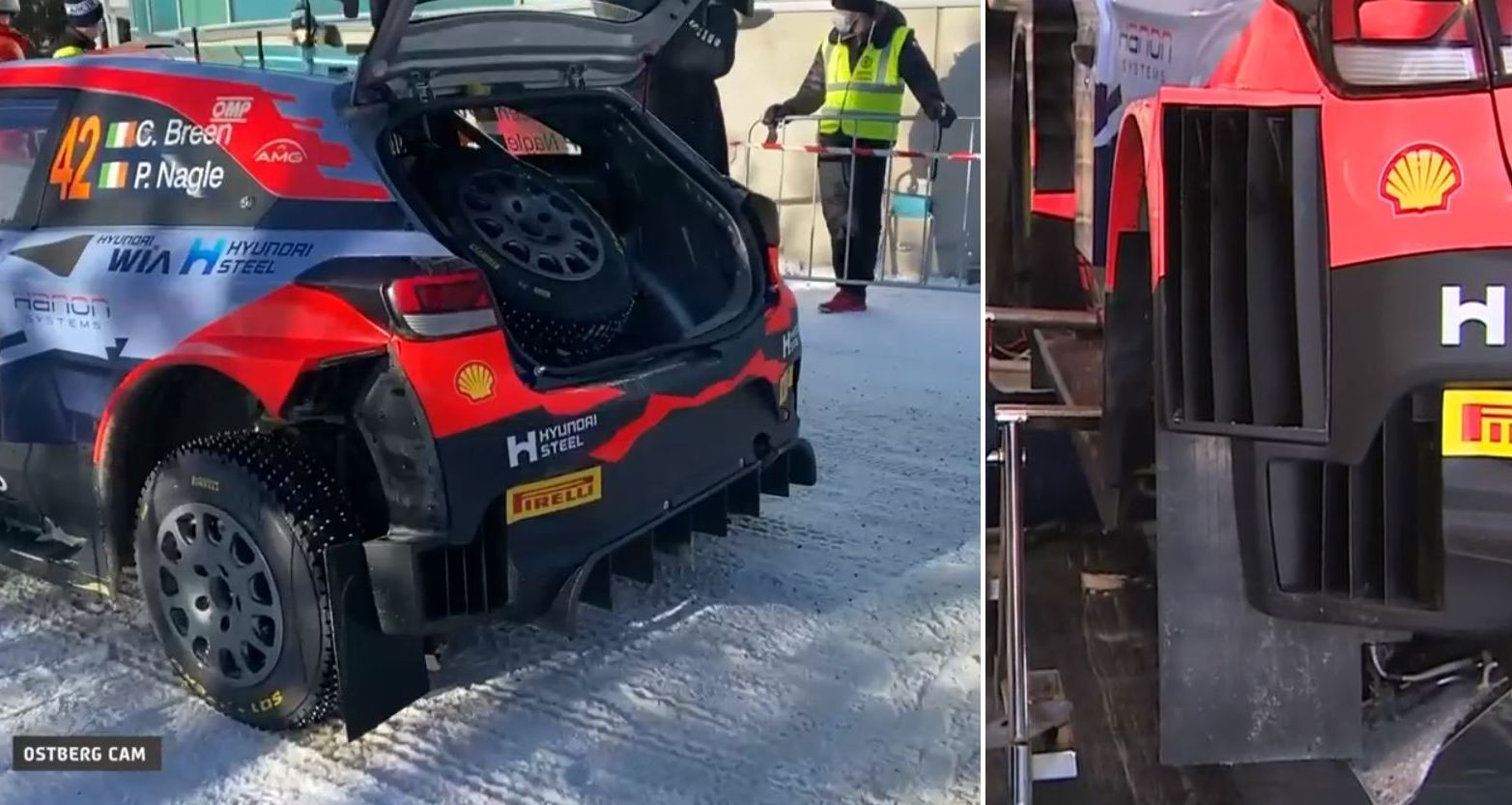 The result was that they hardly accumulated snow in the rear of the car. But they also lost the advantage of the rear fender vents. The image below shows how this part works (when available). 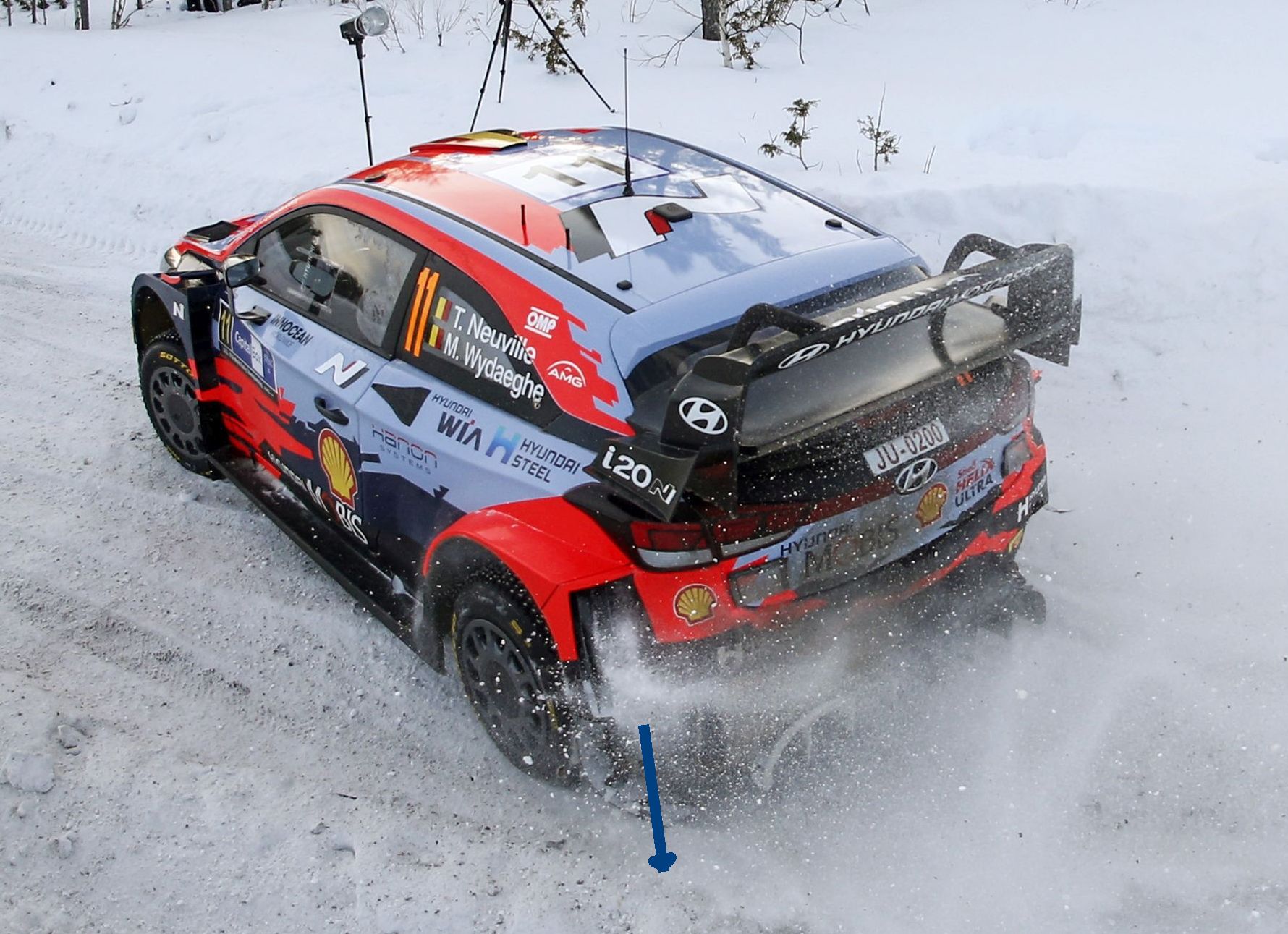 The air (and snow) from the wheel space is sent to the sides of the car, thus avoiding its interaction with the car wake. The car wake is an important source of drag. The loss of the rear fender vents resulted in more air sent to the car wake, thus increasing the drag and limiting their top speed. Casually or not, the Hyundai seemed to be the car with a lower top speed during the event, and this is possibly one of the reasons. 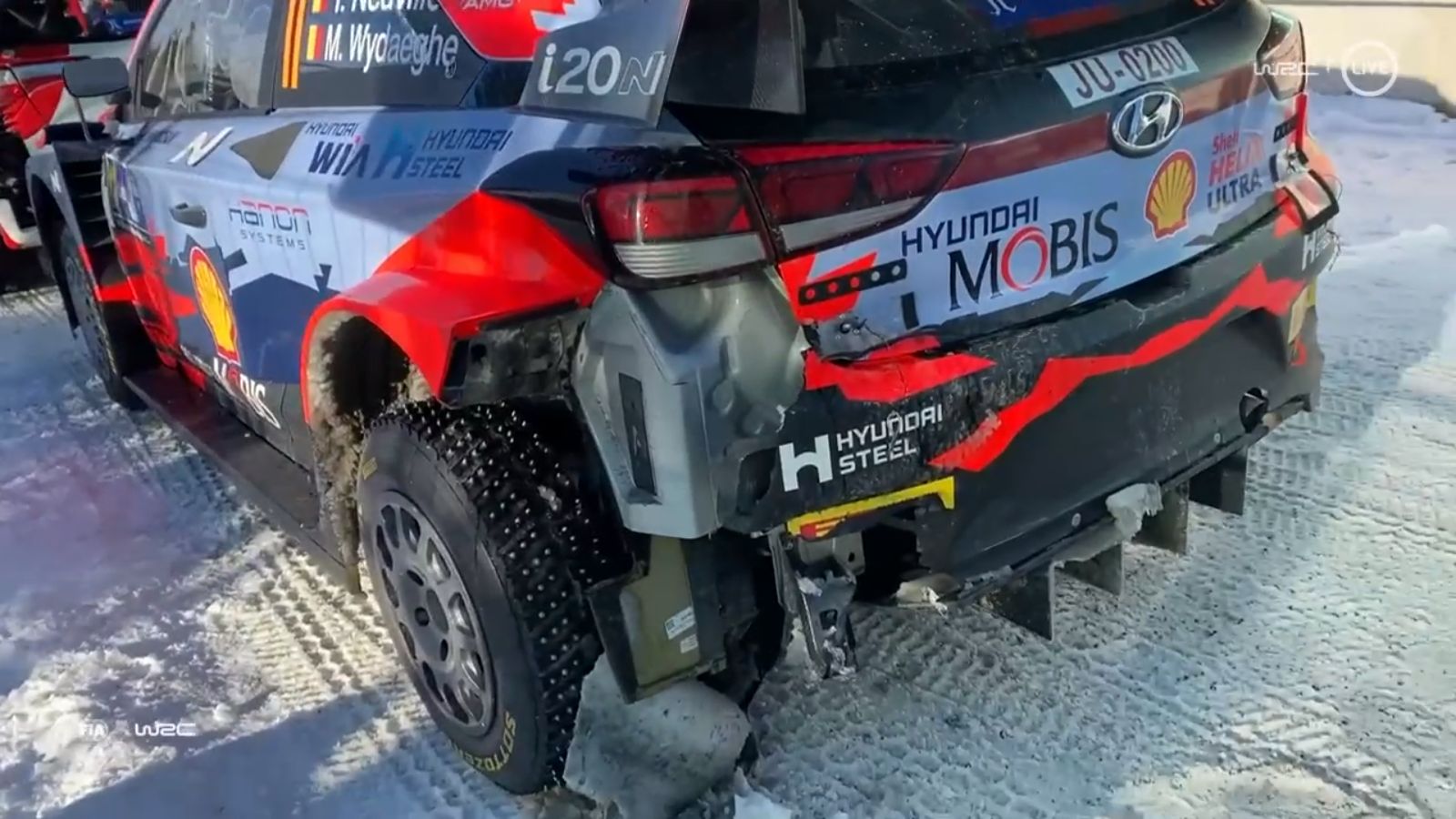 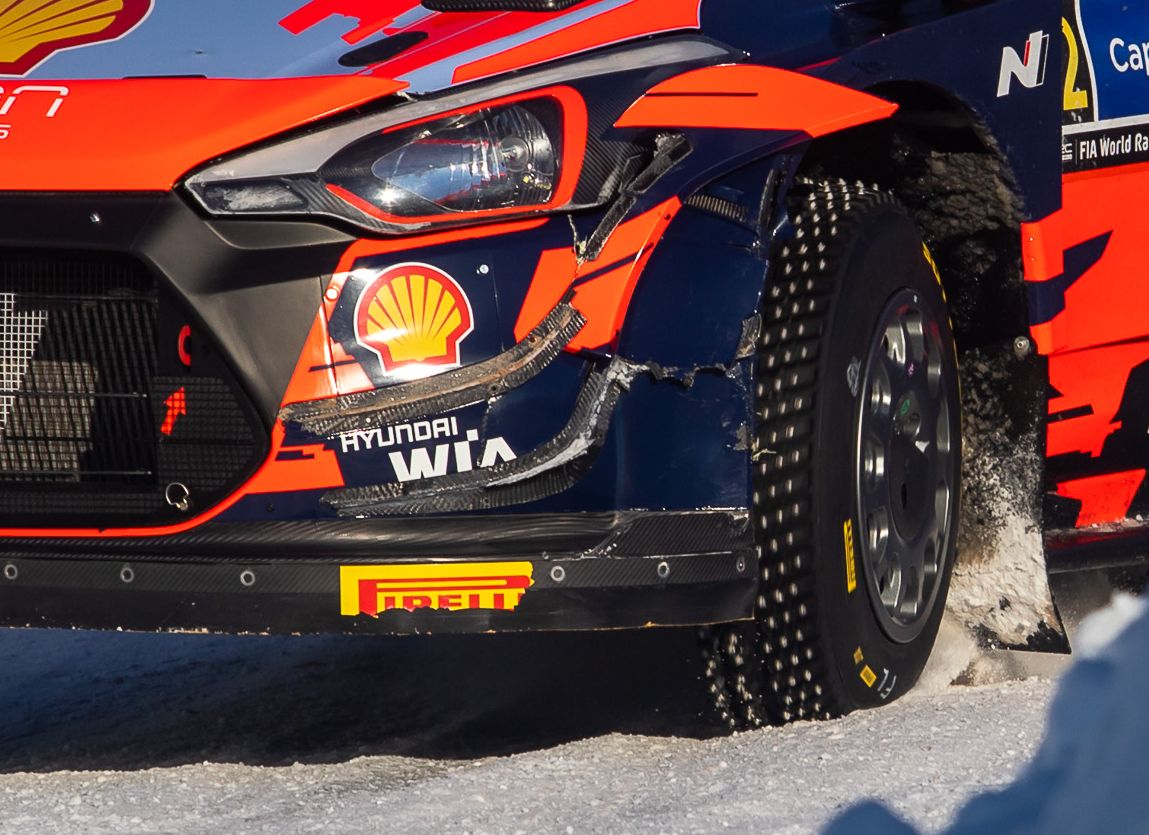 The high speed and the impacts with the snowbanks represented a tough test for most of the aero parts, not only for the rear fenders. The reliability of rear diffusers and dive planes suffered from these conditions, at the price of losing them or suffering serious damages, as shown in the pictures above. 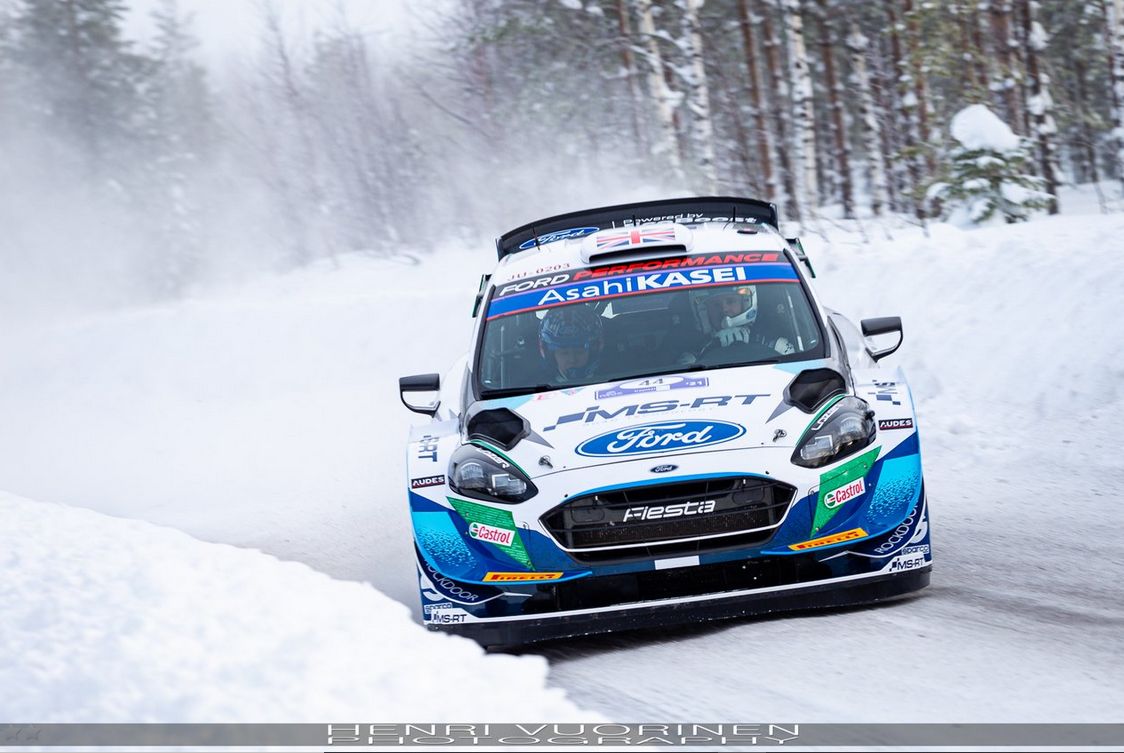 The Arctic event included some very fast stages: the average speed was over 130 km/h in six out of 10 stages. Three of them have entered the top 10 of the fastest stages run by the 2017 WRC car generation, as shown in the table below. Note that, for the first time, a non-Toyota car enters the top ten, thanks to the stage win by the Hyundai i20 Coupé WRC driven of Tänak/Järveoja at Siikakämä.

So high speeds confirm the importance of the aerodynamics in the event, and the penalty caused by the loss of any of the aero parts.

Toyota won four out of the six super-fast stages (66,6%), while Hyundai the other two (33,3%). It might seem a poor result, but it is not. It confirms the progress of the Hyundai i20 Coupé WRC at high speed, as the percentage before this event, on the super-fast stages (average speed above 130 km/h) was 80% of the stages were won by Toyota, only 12% by Hyundai and 8% by M-Sport/Ford. 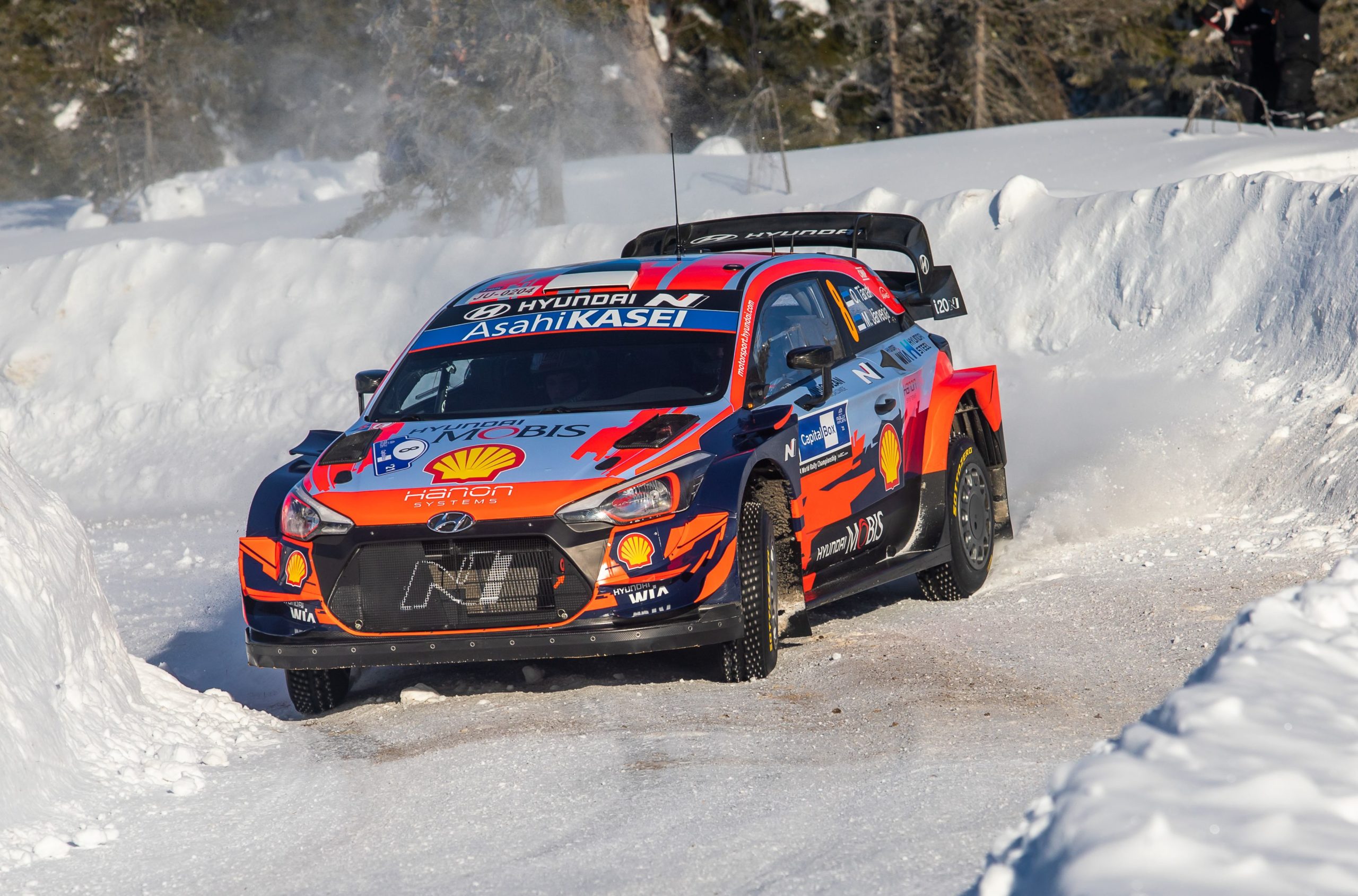 During the Arctic Rally Finland 2021 very sad news arrived about one of the greatest rally drivers ever, he had left us. Hannu Mikkola, Rally World Champion in 1983. Requiescat in pace, Hannu. 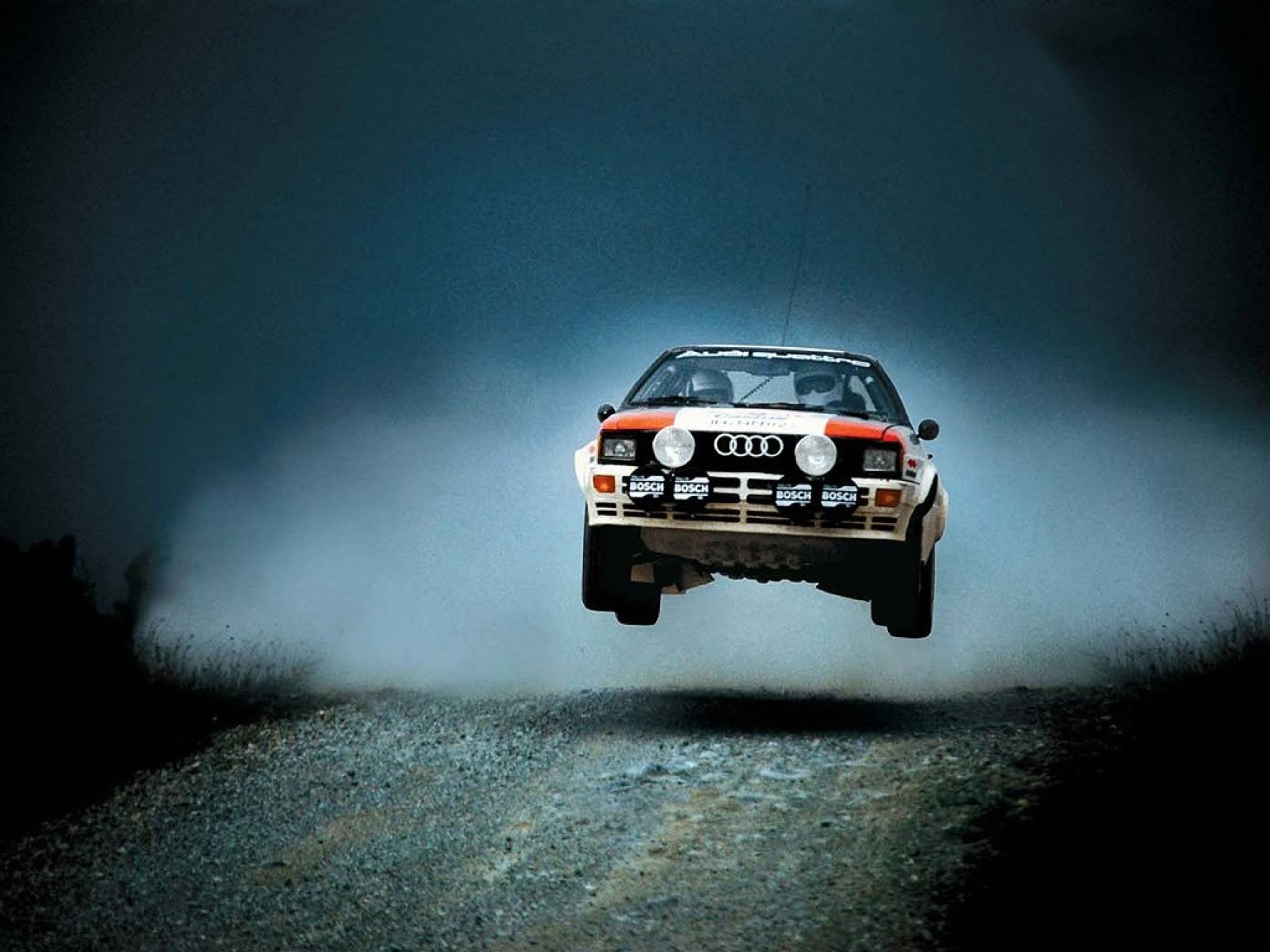