To @DemaMarcE, for inspiring this article.

One of the main problems of rally cars, in terms of aerodynamics, is the constant change of ride height and balance (mainly roll) during the stages. The current WRC cars include many aero elements to improve the aerodynamic performance under the car, both by preventing air from entering under the car (front splitter, dive planes, side skirts) and by favouring a fast removal (fender vents, flat undercar, wheel diffusers and the rear diffuser). All these elements require that the car remains balanced and at the minimum ride height, to get its optimal performance. Any change in ride height or balance allows more air to enter under the car, thus increasing the pressure. The result is that less downforce is generated, making ineffective all these aero parts, even though the great effort dedicated to design them. We reviewed how suspension and aerodynamics contribute to grip increase in a previous article. But normal suspension does not always help enough.

This is why, some years ago, some teams started to introduce innovative solutions to force the car to maintain adequate car balance and optimal ride height in all situations. These solutions, better known as active suspension, were generally effective, although hard to implement. And expensive, so they were banned, in order to reduce costs. Even so, due to their role in the increase in aerodynamic performance, we believe that it is worth reviewing how they worked.

After some initial attempts in the 80s, during the design of some of the unborn Group S cars, at least three teams (Peugeot, Citroën and Subaru) developed some type of active suspension solutions in the early 2000s. In spite of being part of the same group (PSA), Citroën and Peugeot developed different solutions to minimize the roll effect while keeping a steady ride height. 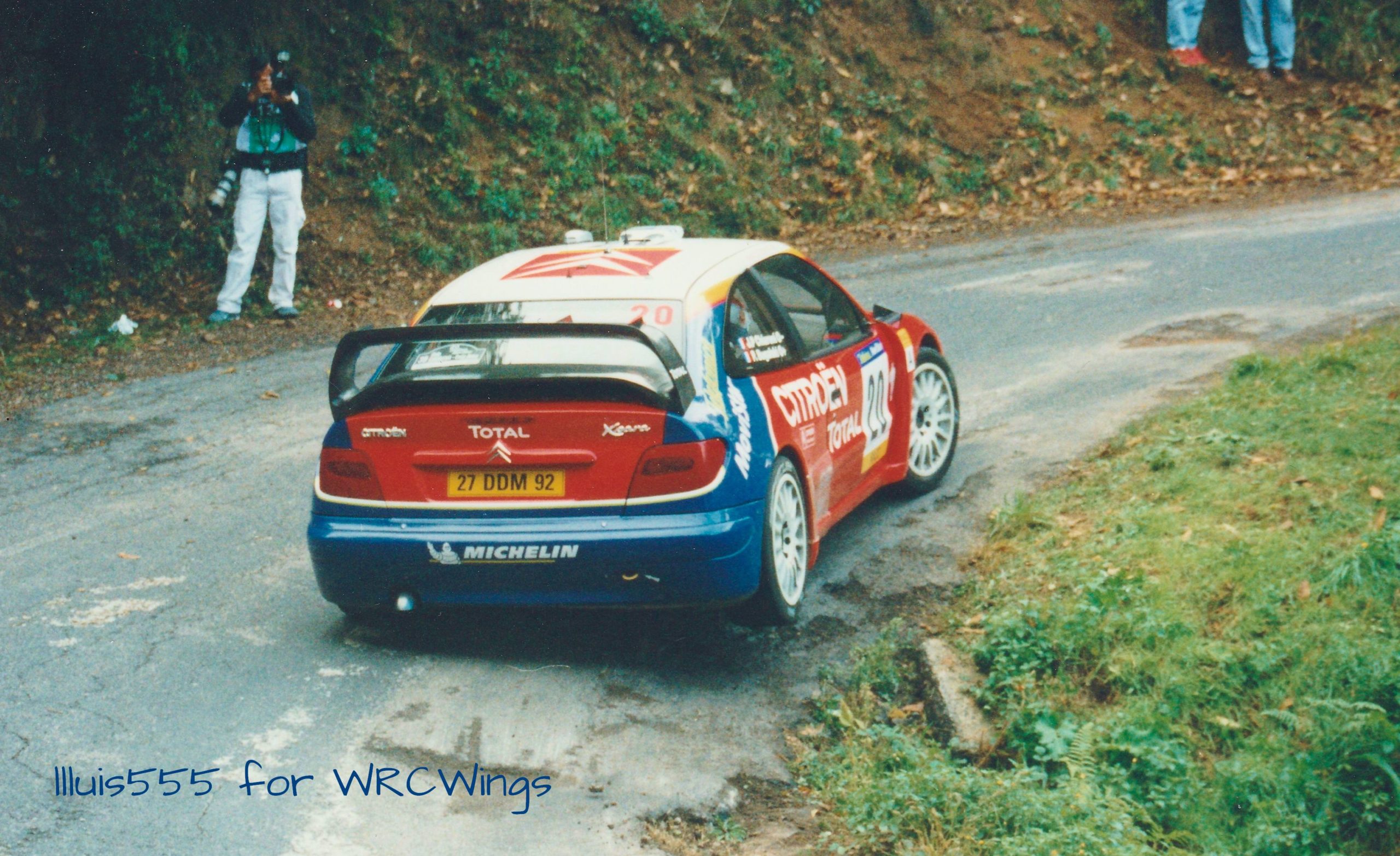 Citroën Sport opted for a hydraulic, split anti-roll bar system solution developed by Kinetic Suspension Systems, an Australian firm. The system, named Reverse Function Stabiliser (RFS), included a hydraulic connection between the wheels on each side of the car, as well as between axles, as shown in the diagram below. 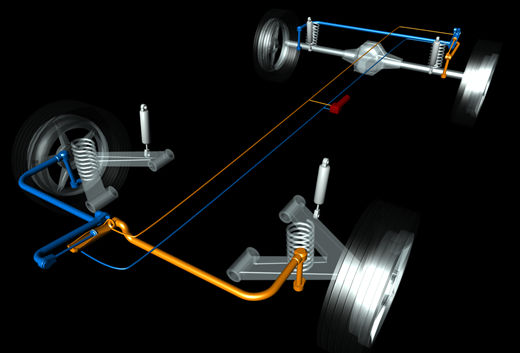 We reproduce here the description of the system provided by Kinetic in their website: “Conventional roll stabilizer bars fitted to most modern vehicles work well to reduce vehicle body roll during cornering but also greatly increase single wheel and articulation stiffness, which reduces ride comfort and the vehicles ability to maintain equal wheel loading on uneven surfaces….The Kinetic Reverse Function Stabiliser System or RFS can retain conventional bounce and damping methods and works by splitting the roll stabilizer bars using a simple cradle device incorporating double-acting hydraulic cylinders. These cylinders are connected using kinetics unique proprietary RFS arrangement. This arrangement passively frees the bars to allow articulation and single wheel type movements but will not permit vehicle body roll. This roll stiffness and “articulation looseness” are achieved simultaneously with neither mode affecting the other. This system requires no computers, pumps or motors.” 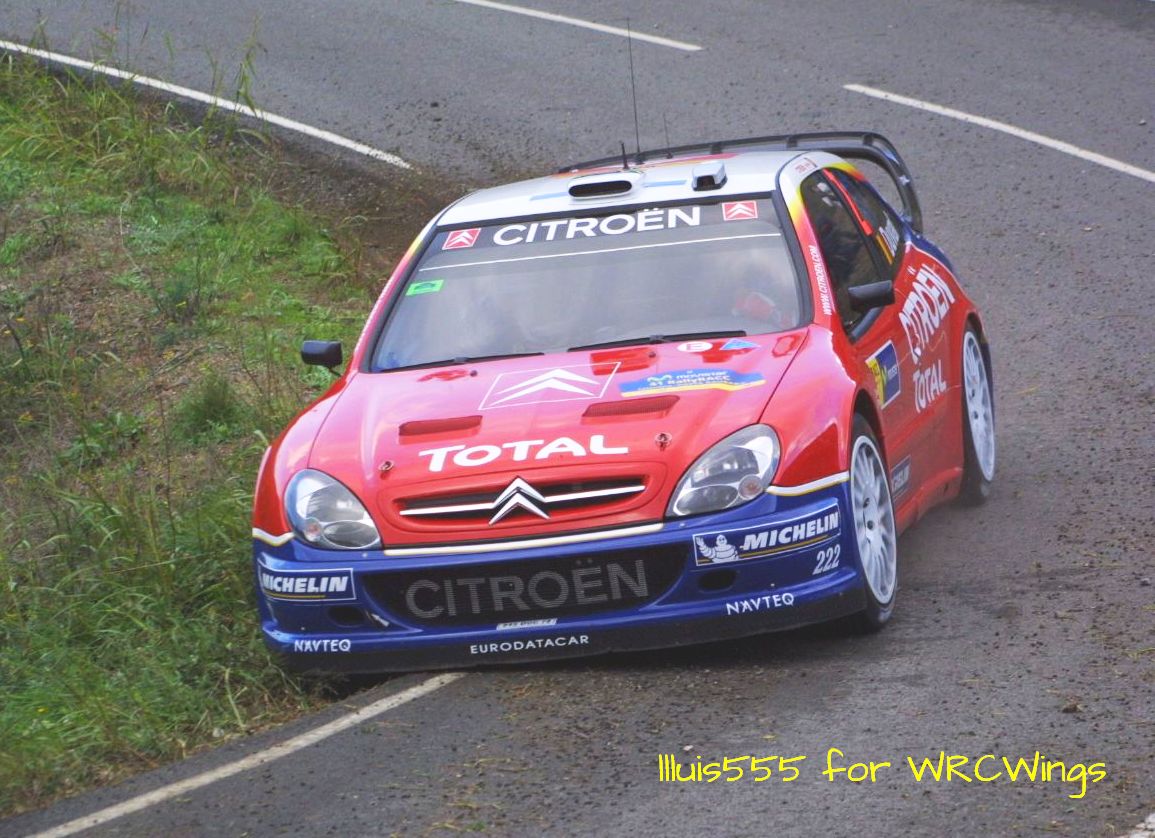 The main advantage of this system was its response to sudden terrain disturbances. Anytime a wheel suffered a sudden change in height, the pressure in the corresponding cylinder increased. The hydraulic system responded then by equilibrating pressure, transferring part of the pressure to the opposite wheel, which leveled out. Also, load could be transferred from axle to axle: in case the car run through a bump and both front wheels got a compression, the rear axle also supported some of the load, even if it was still over “plain” road. When the front wheels released the bump, the system returned to “zero” and when the rear wheels took the same bump, the front axle also shared some of the load releasing pressure from the rear axle. The reason behind was that both axles never went through the same bump at the same time, there was always a difference between both axles, even if only one wheel hit a bump.

For the rest of the time, the system was neutral, leaving the mechanical anti-roll bars to do their job. For this reason, it could be used on any surface, allowing Citroën to include it in the Xsara WRC in all events since its introduction in the Rally Monte-Carlo 2003. According to Andy van Kann, Managing Director of Kinetic, the system made the car faster and more stable, giving the confidence for drivers to press harder. 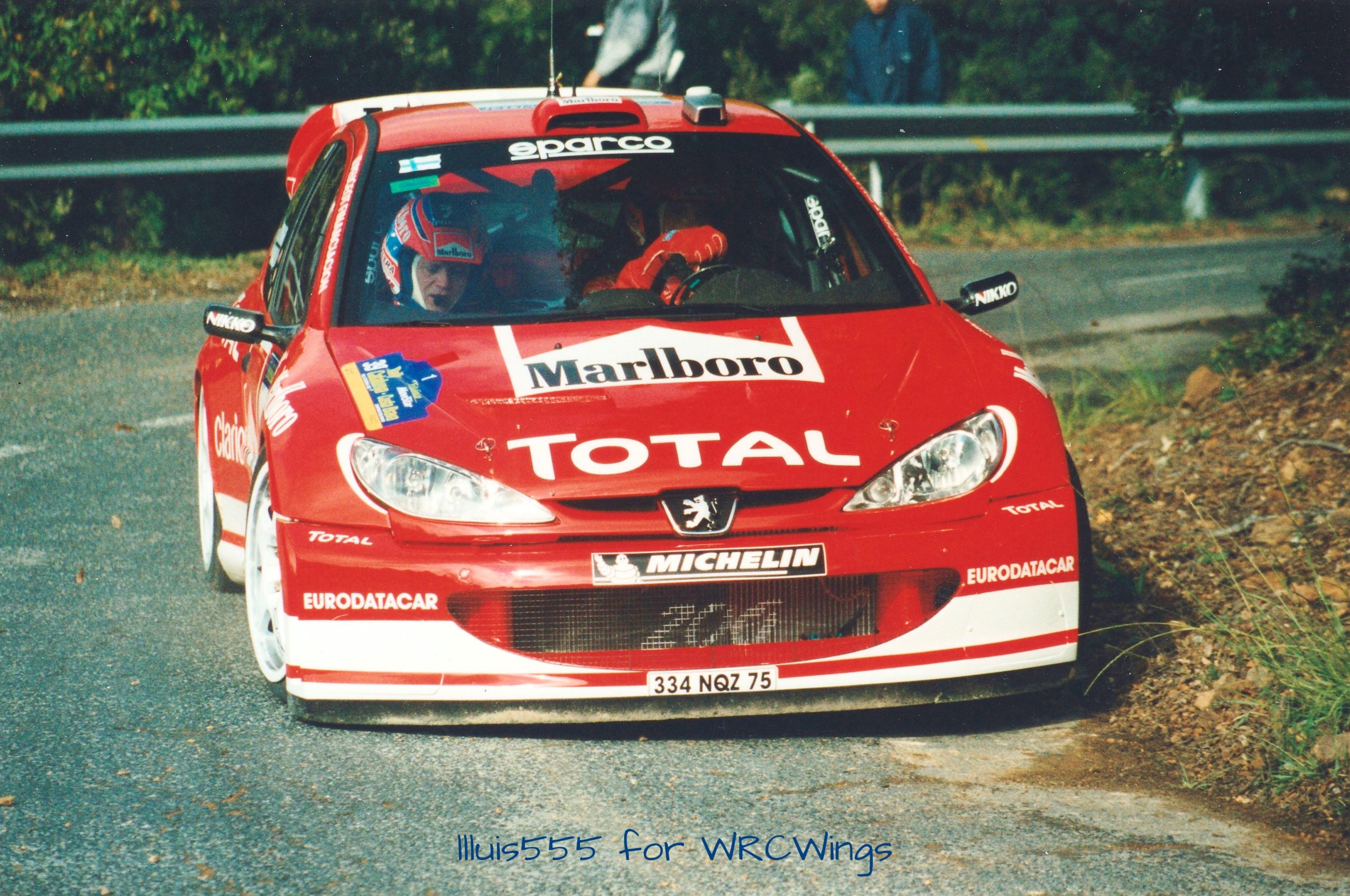 The system developed by Peugeot Sport was different. It consisted of a type of hydraulic assistance to facilitate the job of the antiroll bars. While the Citroën circuit was independent, Peugeot’s anti-roll bars hydraulic circuit was shared with the differentials and the gearbox. The system was pressurized with a mechanical pump, up to a pressure of 150 bars (limited by regulation). An electric-piloted valve controlled the flow of fluid to get the required answer, following the orders of the electronic system in control.

The solution implemented by Peugeot was only effective on smooth (asphalt and soft gravel) surfaces, while it was removed for the rough events. The goal was different: instead of dealing with terrain disturbances (such as Citroën’s did), the Peugeot system was a complement for the antiroll bars to keep a steady ride height on the faster events, that is, those where the balance is more important and aerodynamics performance is critical. 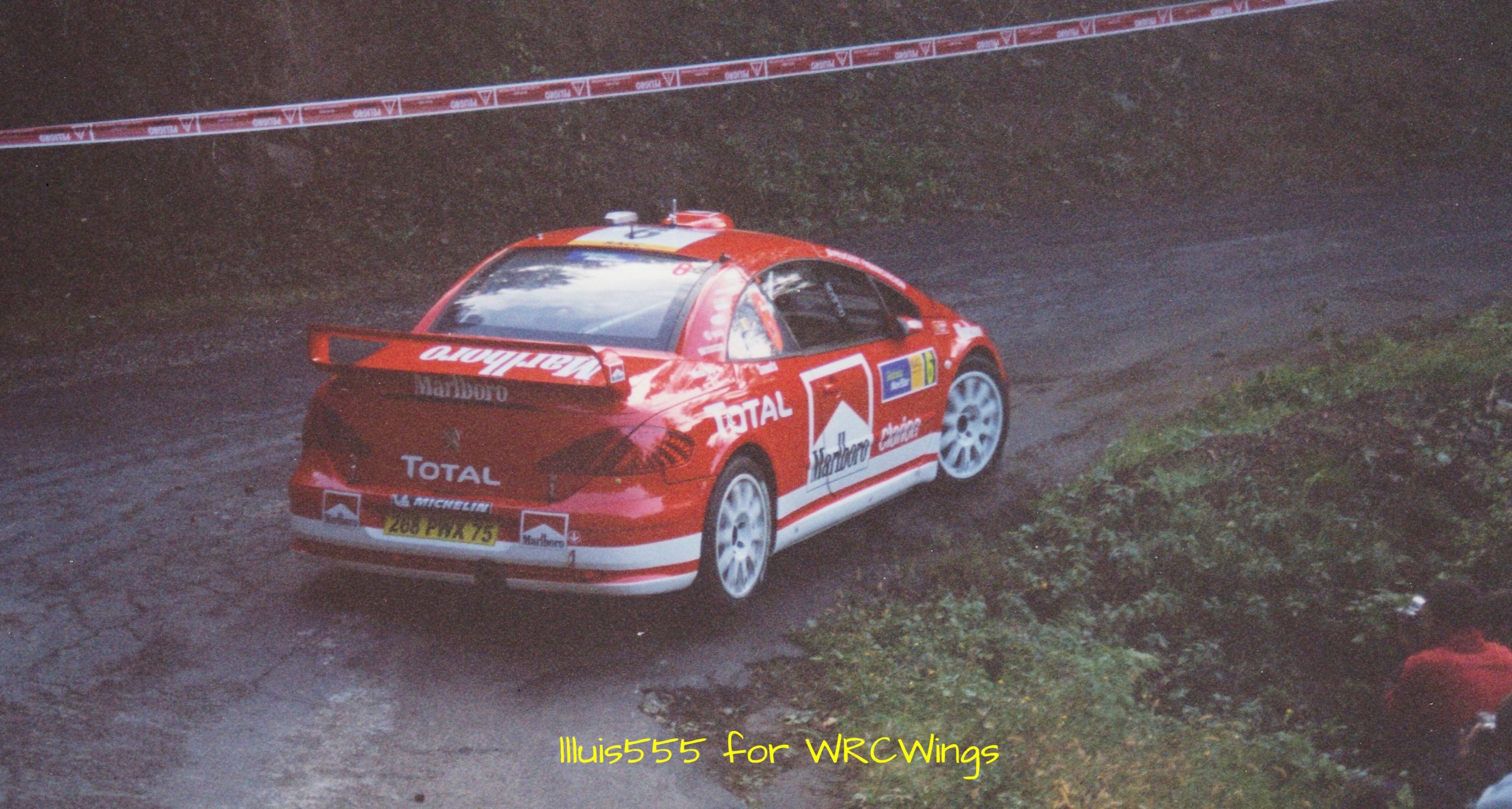 The first time it was used was in the car of Gilles and Hervé Panizzi in the 2002 Rallye Monte-Carlo. Since the next event (Sweden) and for the rest of the tarmac events, all three cars included this solution, although Grönholm/Rautiainen sometimes opted for the mechanical solution. In Rally Finland 2002, new electronically controlled anti-roll bars were introduced as well as in the first leg of Rally New Zealand (only in Rovanperä/Silander’s car). The team maintained the use of this solution in 2003, as well as in the Peugeot 307 WRC in 2004 and 2005. 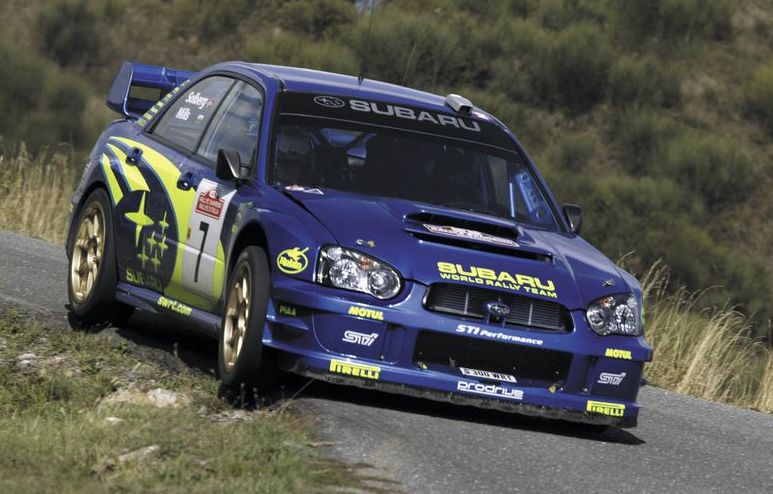 An alternative solution was developed by Prodrive for the Subaru Impreza S9 WRC03, known as roll control system. The anti-roll bars were replaced by a hydraulic circuit, controlled by a separate pump and accumulators running at up to 150 bar, controlled by a TAG electronic system. Sensors measuring pitch, yaw and steering angle, among other inputs, permitted softer suspension settings, maximizing tyre footprint and reducing the ride height.

The electronics were closed-loop, that is, engineers could dictate the car’s behaviour, but only to a certain degree. The result was that the car didn’t roll nor pitch, keeping the body flatter. A performance gain of 0.2 seconds per kilometer was estimated. But it had also disadvantages, such as the extra weight or the cost in power: two or three bhp according to Prodrive, closer to 30 according to their rivals.

Prodrive only used the new roll-control suspension system in competition in the Subaru Impreza WRC03 of Solberg/Mills in the 2003 Sanremo Rally. For the remaining of the 2003 season, it was not used again in order not to compromise Solberg/Mills options of winning the Driver’s title. In 2004, a new evolution of the car, the Subaru Impreza S10 WRC04 was aligned since Rally México, without the roll control system, which was never used again. 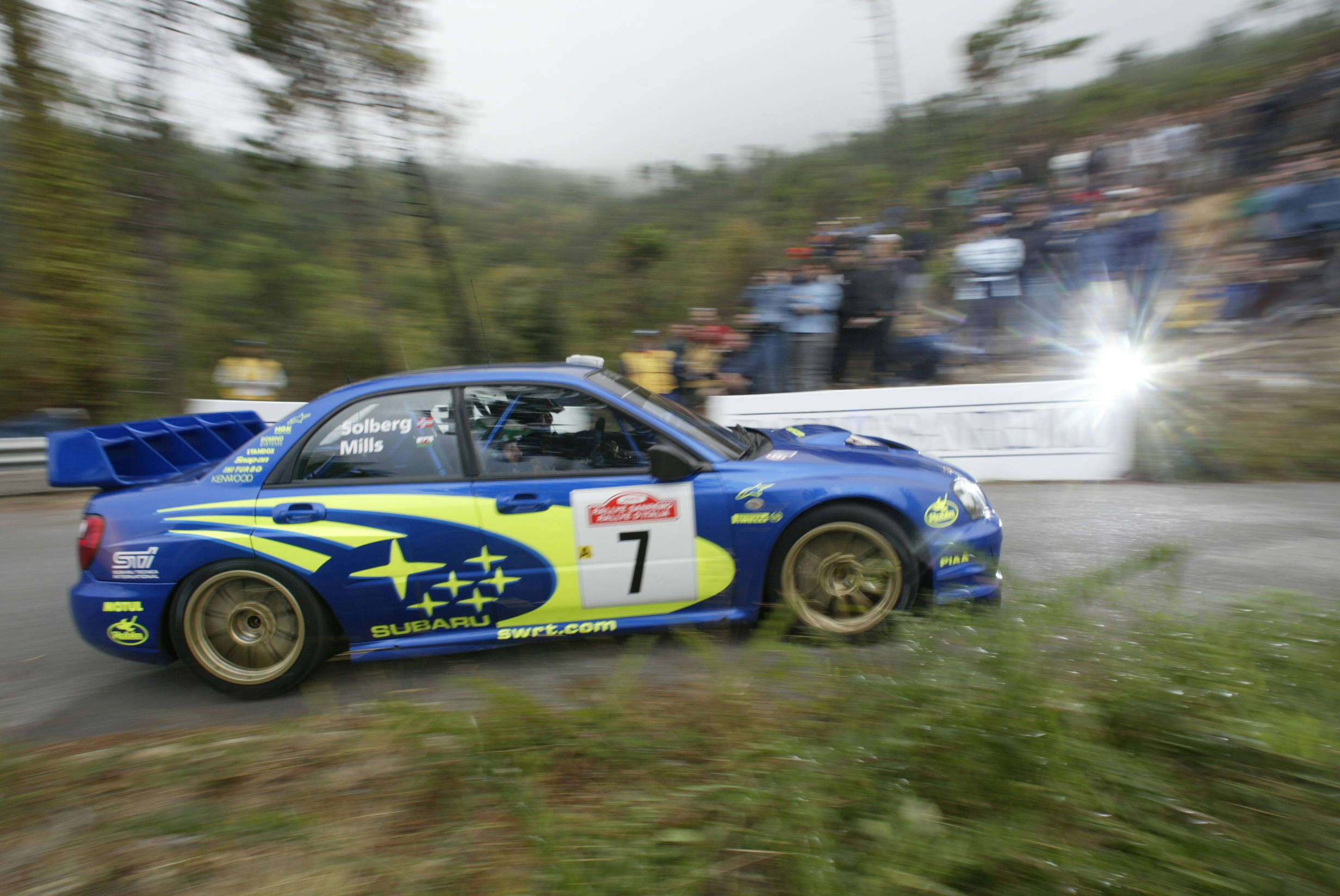 All these solutions were simple in their concept, but really difficult to set-up, requiring multiple adjustments and test sessions until engineers and drivers became confident enough to use them in competition. That made them really expensive. Not surprisingly, they were banned in the WRC regulations for 2006, together with other expensive solutions such as front and rear piloted differentials, traction control, water injection and ABS, in the search of a drastic cost reduction.

11 thoughts on “Active suspension, or how to make the aero of a rally car more efficient”