During the pre-event tests for Rally Croatia held last week, Toyota has used again the latest front aero modifications of the Yaris WRC first seen in December Pirelli snow tests. Same as they did in the Pirelli gravel tests held near Solsona and Igualada in March. This probably indicates that the new front aero package will be used since the Croatian event, once they have presumably homologated by the end of March. It really makes sense, as all images from the pre-event tests indicate that it will be a very fast event, where any aero improvement will surely contribute to a better result. Further confirmation arrived yesterday when also Takamoto Katsuta and Daniel Barritt used the new aero in their Croatian pre-event test, as their car usually does not include the latest aero configuration. 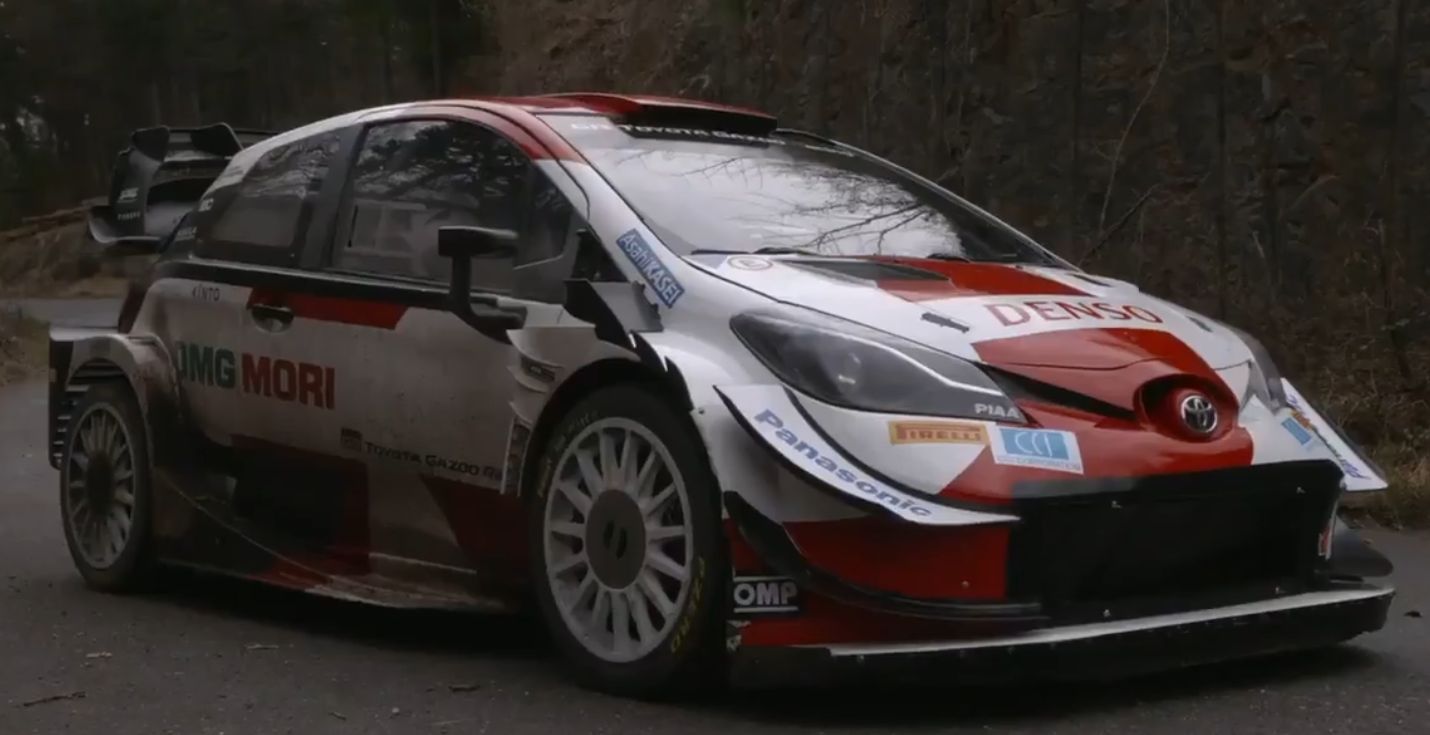 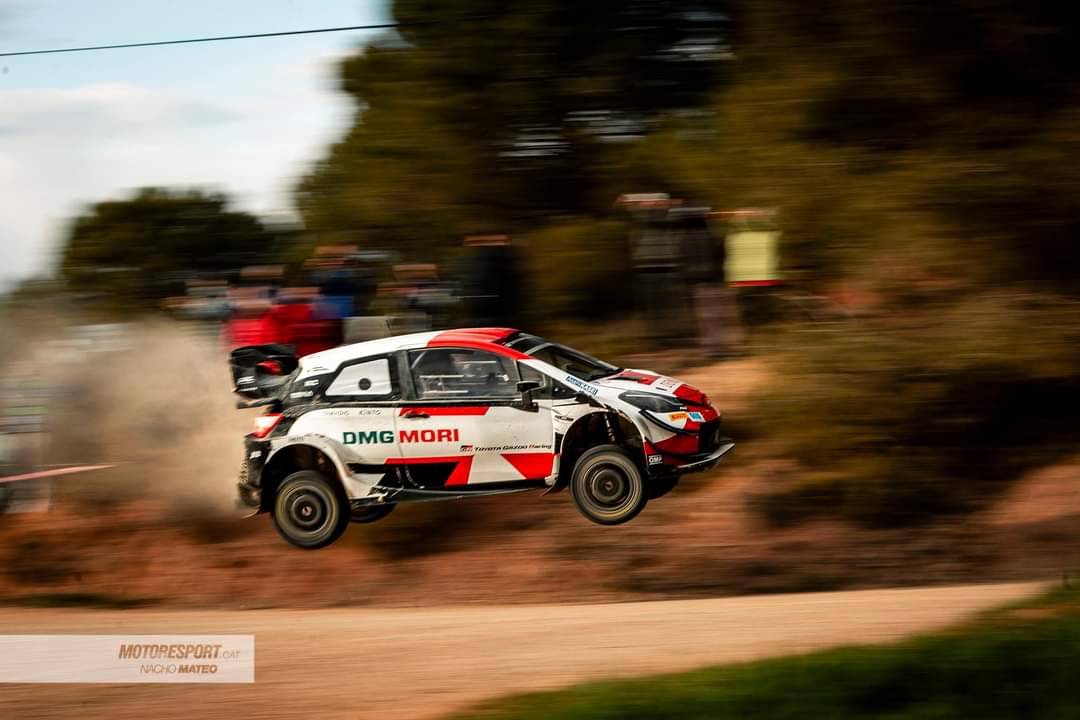 We already saw the detail of the modifications in a previous article published in December 2020. Now, with more images available from the latest tests, we can evaluate how do they perform and what are the benefits. 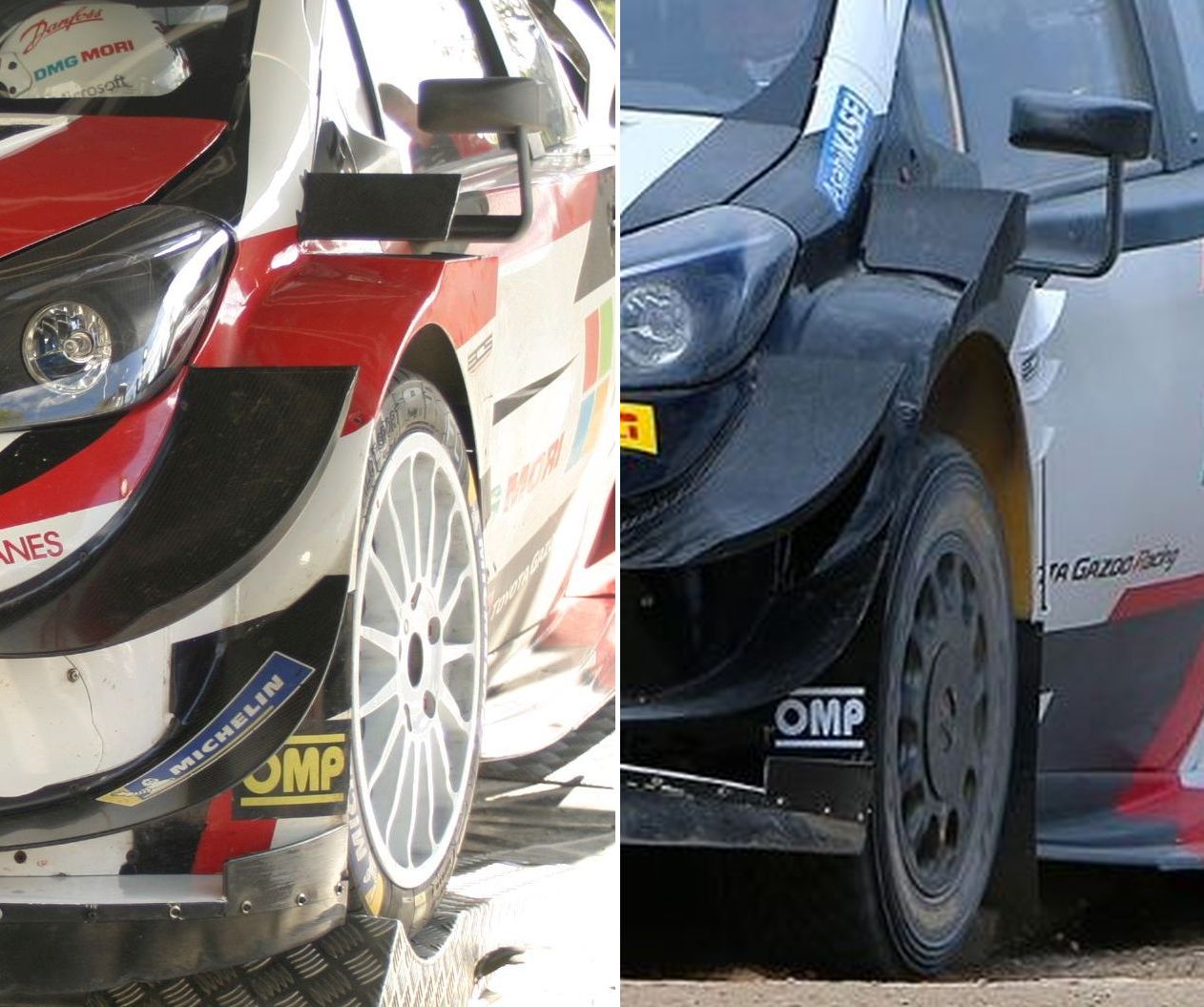 The front fender of the Toyota Yaris WRC concentrates all the modifications that Toyota has been evaluating, both at the front and at the side of the fender.

1. Modification at the front/upper of the front fender

The small wing on top of the front fender (noted with an a in the picture below) has increased in size. Now, the gap between the new winglet and the upper face of the fender has been significantly reduced, forcing more air to flow over the wing. The result is that more pressure is exerted over the winglet, resulting in more front downforce. Also, the bigger size of the winglet means lower pressure behind, allowing more air to be removed by the upper vent of the fender, located behind the winglet. The accumulation of air under the car generates lift, so any solution that helps to remove it contributes to reducing lift, that is, to get additional downforce. 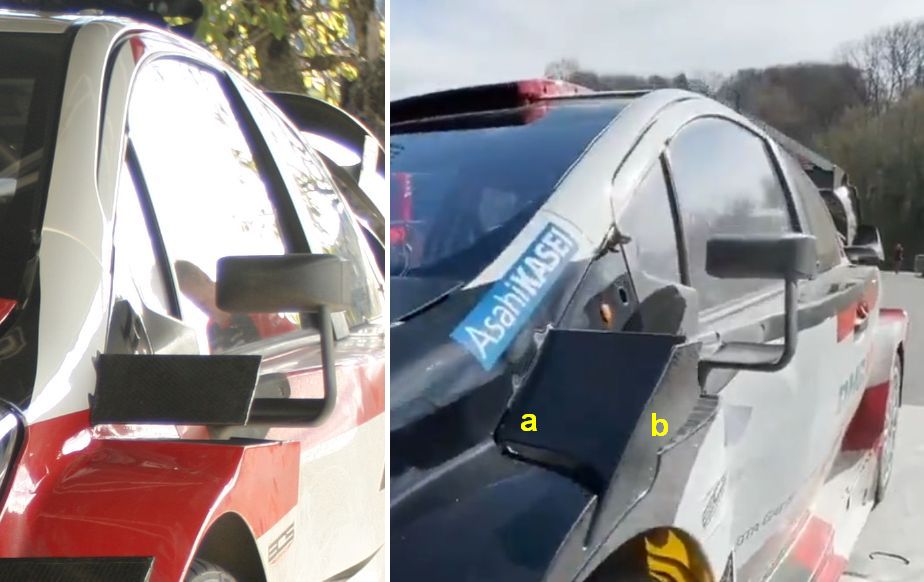 The concept is different from the solution used by Hyundai, which is a real wing, that generates downforce by the pressure difference between the upper and lower side of the (inverted) wing due to differences in airspeed. In the case of the Toyota, the downforce is generated merely by the impact of air over the surface of the part, as air has no option to flow under it. The reason behind this difference is the presence of the vent on top of the Toyota fender, which requires a kind of screen to allow air to be removed. The absence of this upper vent in the Hyundai allows using a real wing (and Gurney flaps), with no impact on the fender vent, as this is located at the rear of the fender. 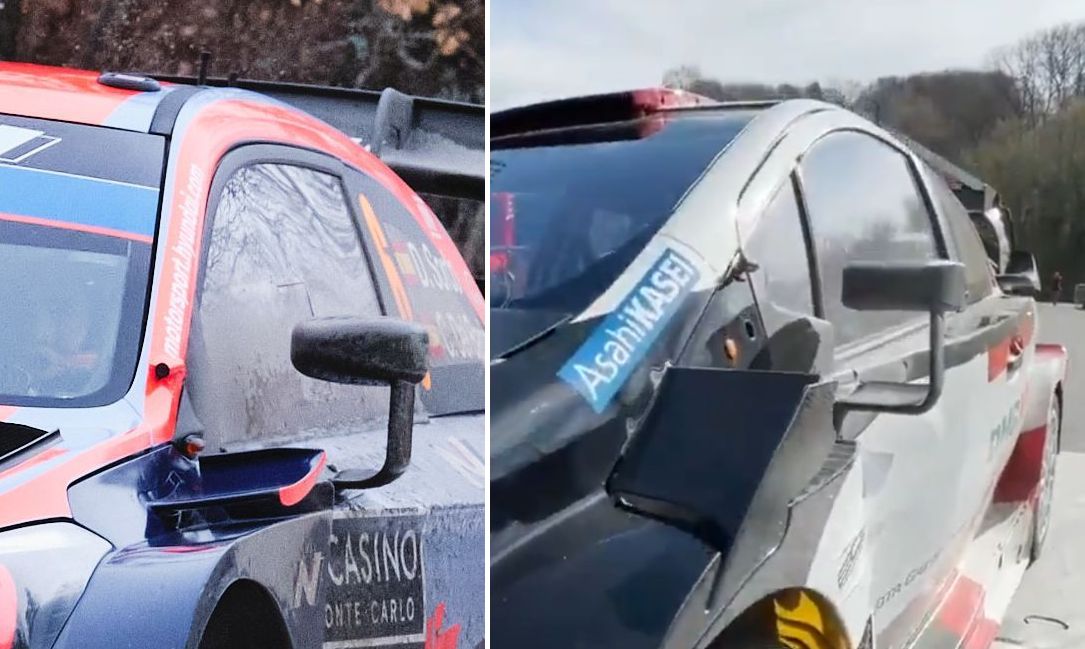 A second modification in the new package of the Yaris WRC is the introduction of an endplate (b in the picture above). The purpose is to force air to flow over the winglet, making it more effective. Without the endplate, a part of the airflow could flow on the winglet side, reducing the pressure exerted on it, thus reducing its efficiency. 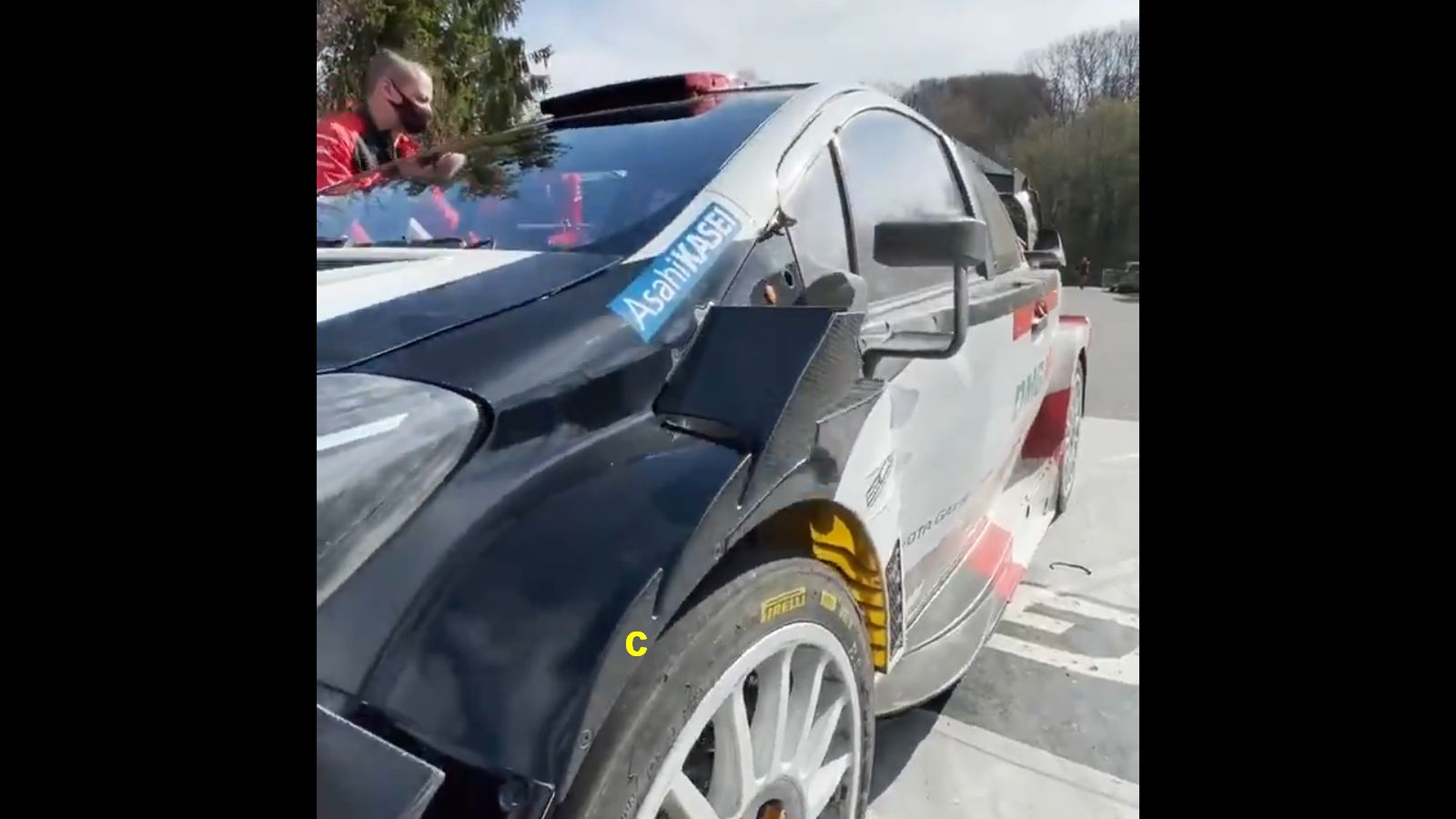 The endplate has been prolonged to the front of the fender. But, instead of a normal endplate, a saw teeth endplate (c) has been used. The goal of such a design is double. As we saw, the endplate forces air to flow into the required direction (to the winglet). 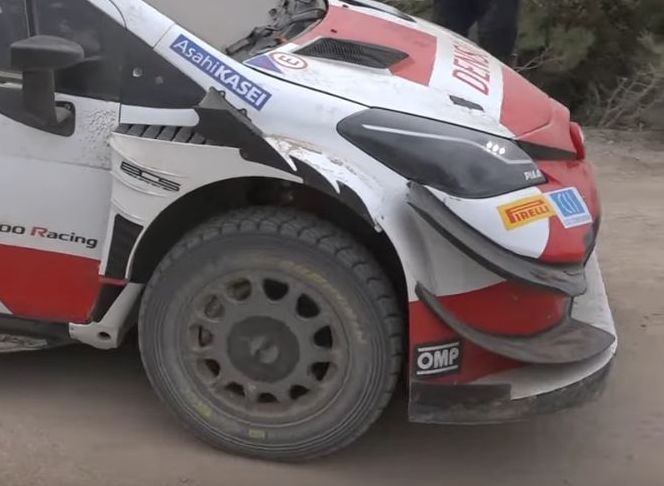 But why a saw teeth? Because this is the best way to enlarge the profile of the endplate. The air flowing over each tooth generates a swirl when it detaches from the top of the tooth. The result is that rows of swirls (vortices) are generated, converting the saw-teeth endplate into a vortex generator. With what purpose? Vortices are usually generated to transfer energy from the main flow to the low-speed air flowing close to the car’s surface. The result is that a small reduction in drag is achieved, and even some additional front downforce can be generated. 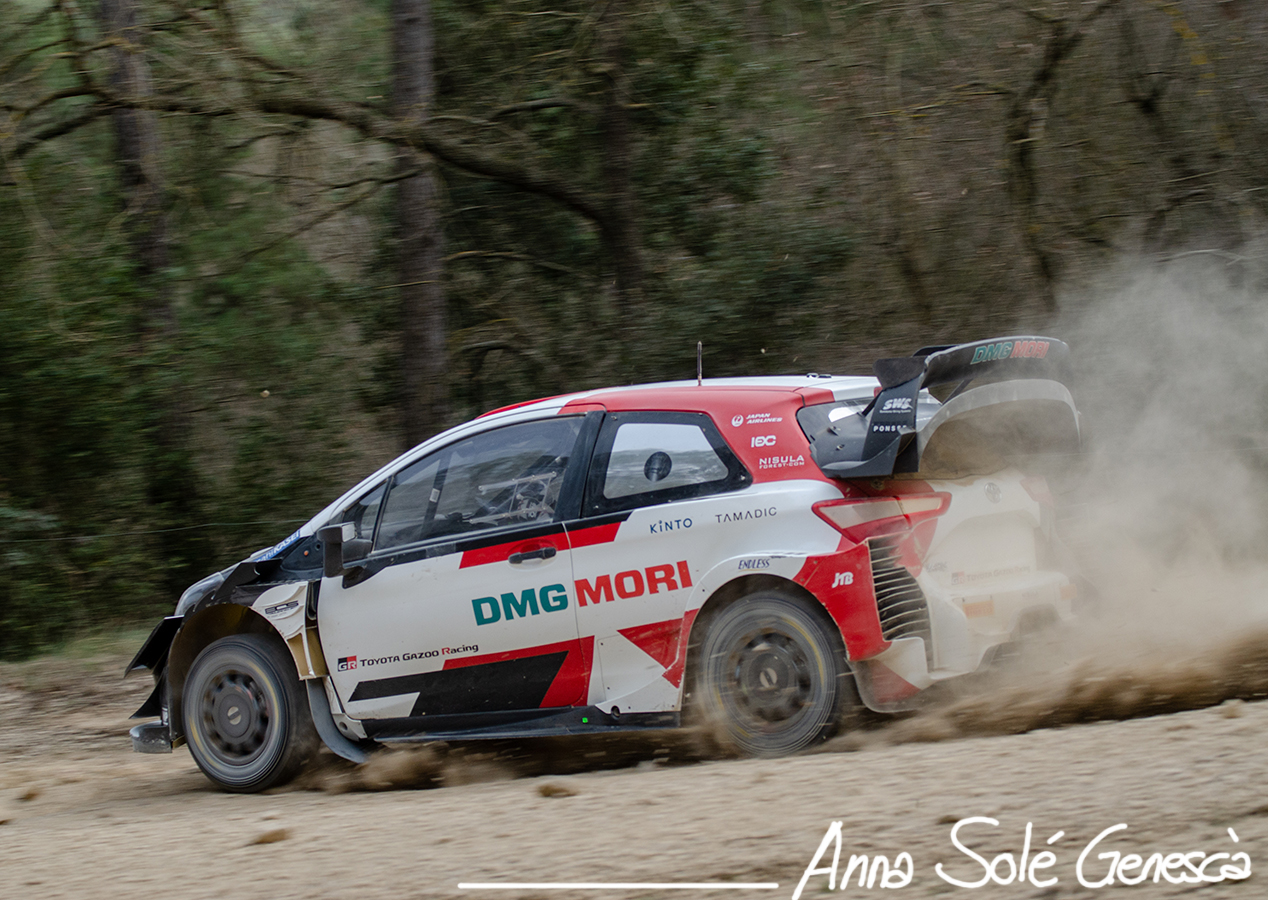 2. Modification on the side of the front fender

Three modifications can be identified on the side of the front fenders. The side shape has changed into a rounded side profile, replacing the original, straight profile (d).

The reason behind this modification is to force air to flow more attached to the car. This is the result of what is known as the Coanda effect, which states that air (as any other fluid) flowing over any surface follows the shape of this surface even after losing contact with it. It is one of the reasons that help airplanes to fly, and it’s also commonly applied to racecars. In this case, with the new design, air follows the profile after losing contact with it, and it is sent towards the car door area. The result is that less drag is generated.

Three small wing profiles (e) have been added to the front fender side. They contribute to send air upwards, the same as the rear fender vents do. The goal is to send air upwards, so it is mixed with the main airflow. The result is that more air is sent towards the rear wing side winglets, making them more effective in rear downforce generation. 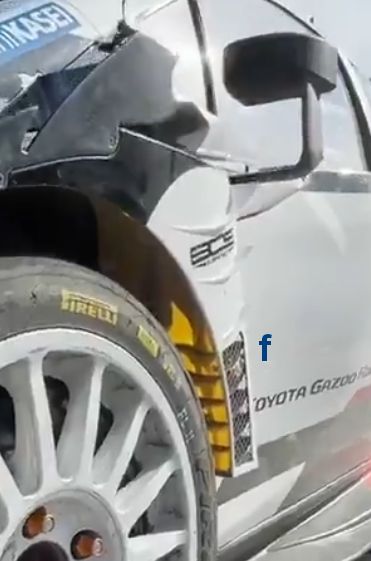 Finally, the lower part of the fender side is now open (f), allowing air to escape both to the rear or the side of the fender. The result is that the capacity of air removal has been increased, thus less lift (more front downforce) is generated. The image above shows the internal design of the vent. For the gravel events, it looks like this part of the vent will not be used, as the images from the Solsona test seem to indicate. Most probably to prevent them from being blocked by dust or mud. 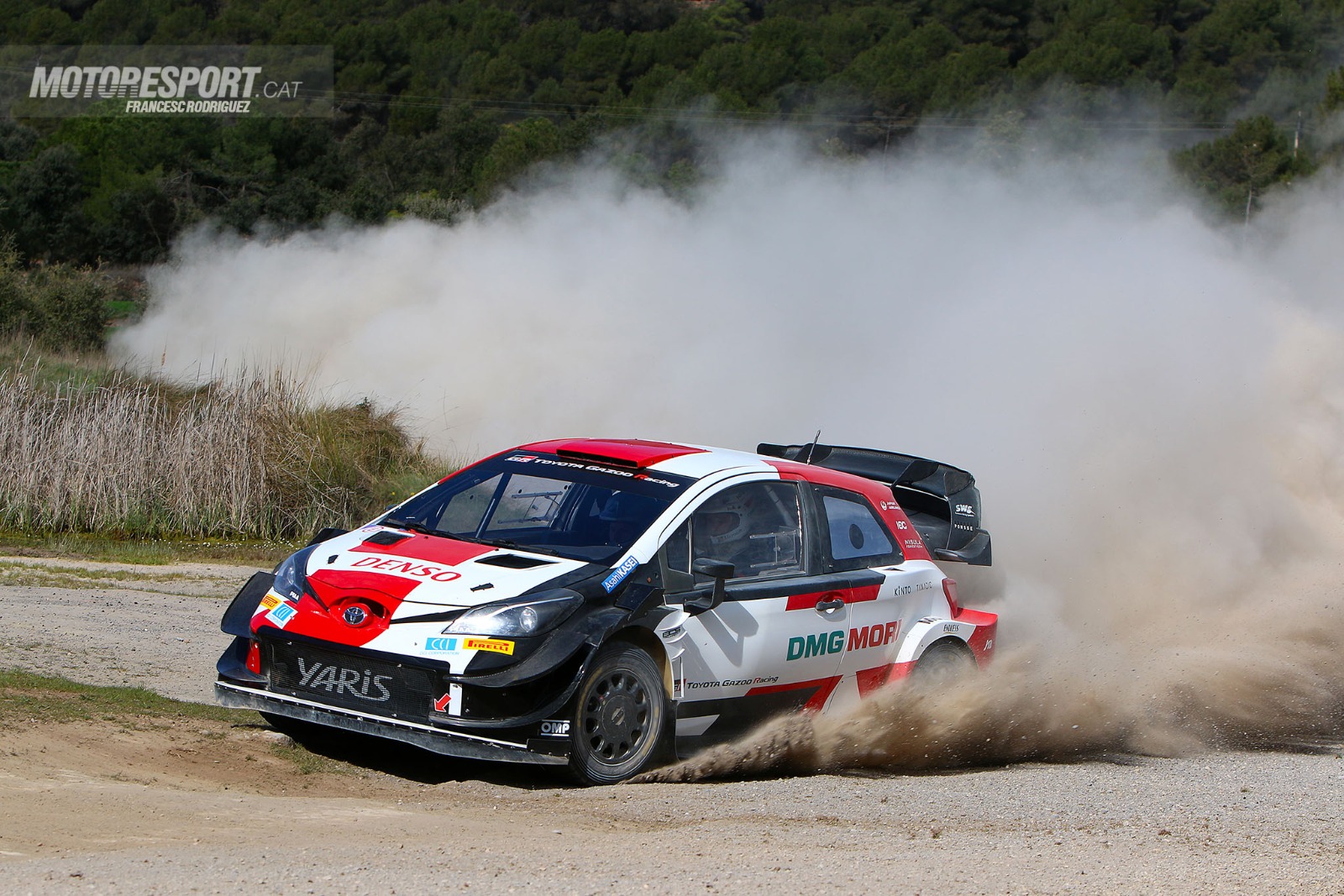 In summary, the new modifications will contribute to reducing understeering by generating more front grip. But also more grip will be obtained at the rear, thanks to the increased efficiency of the rear wing these modifications suggest. And drag will be reduced, which is also important, in terms of top speed. Most probably these are the latest modifications we will see for this car, once they are finally homologated, as all efforts are now concentrated on the design of the 2022 cars. But the fight for the 2021 title is expected to be very tight again, and any improvement is welcome.