Updated on July 10th, 2021 with new images and information

M-Sport Ford World Rally Team (WRT) revealed last Thursday (July 8th, 2021) the prototype of the new Puma Rally1 rally car, the hybrid car that will be aligned by the British team in the 2022 WRC Championship. The images show only a few modifications with respect to the mule test car already seen in previous tests, but still, some of these modifications are worthy to review, while we wait for new images of the full car. 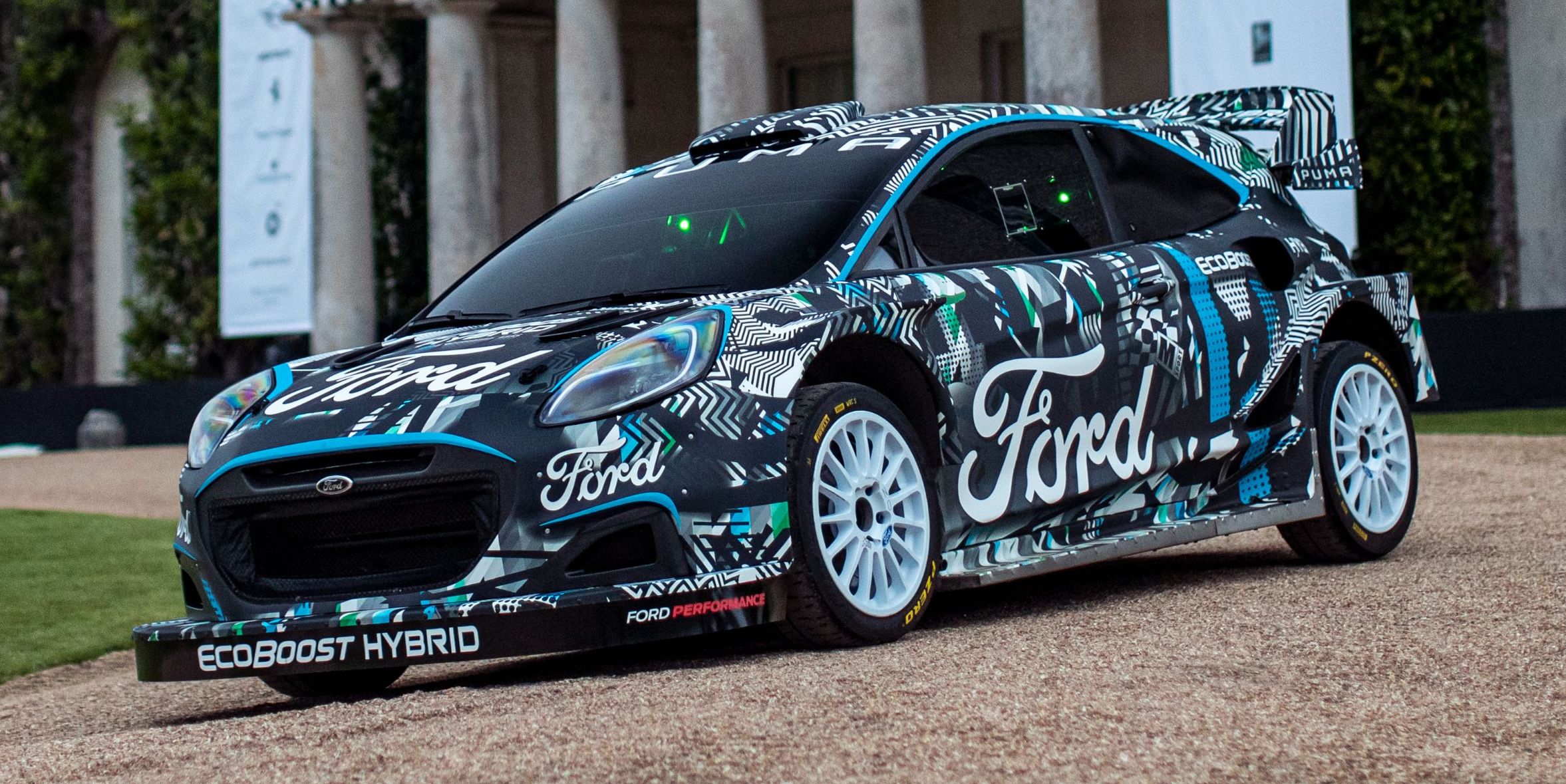 The first important modification is the adoption of the Puma body, which is wider (1805 vs 1735 mm) and taller (1555 vs 1466 mm) than that of the Fiesta. This means that the front area is higher (unless the body has been scaled down). The drag resistance (or the resistance to air) is proportional to the front area of the car, this meaning that the new Puma will initially generate a bigger drag (air resistance) than the Fiesta, thus reducing the top speed of the car. 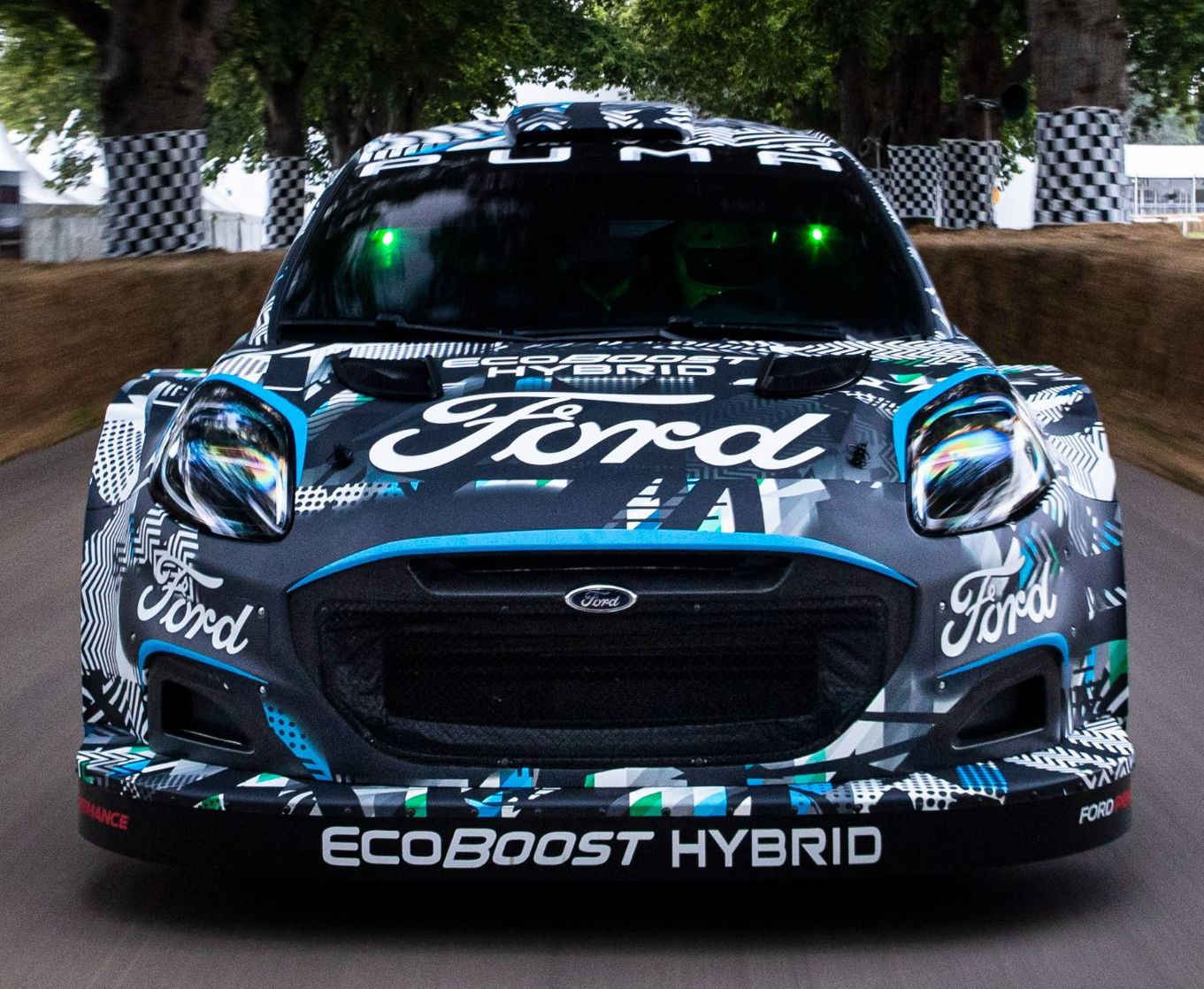 The lack of some aero appendices in the Puma (such as dive planes) will partially compensate for the front area increase, so we will have to wait until the final version to determine how big the drag increase can be.

Also, the front area can be compensated with a smaller drag coefficient (Cd), which is related to the shape of the car. If the final shape of the Puma is smoother than that of the Fiesta, the impact on drag could be reduced or even neutralised. 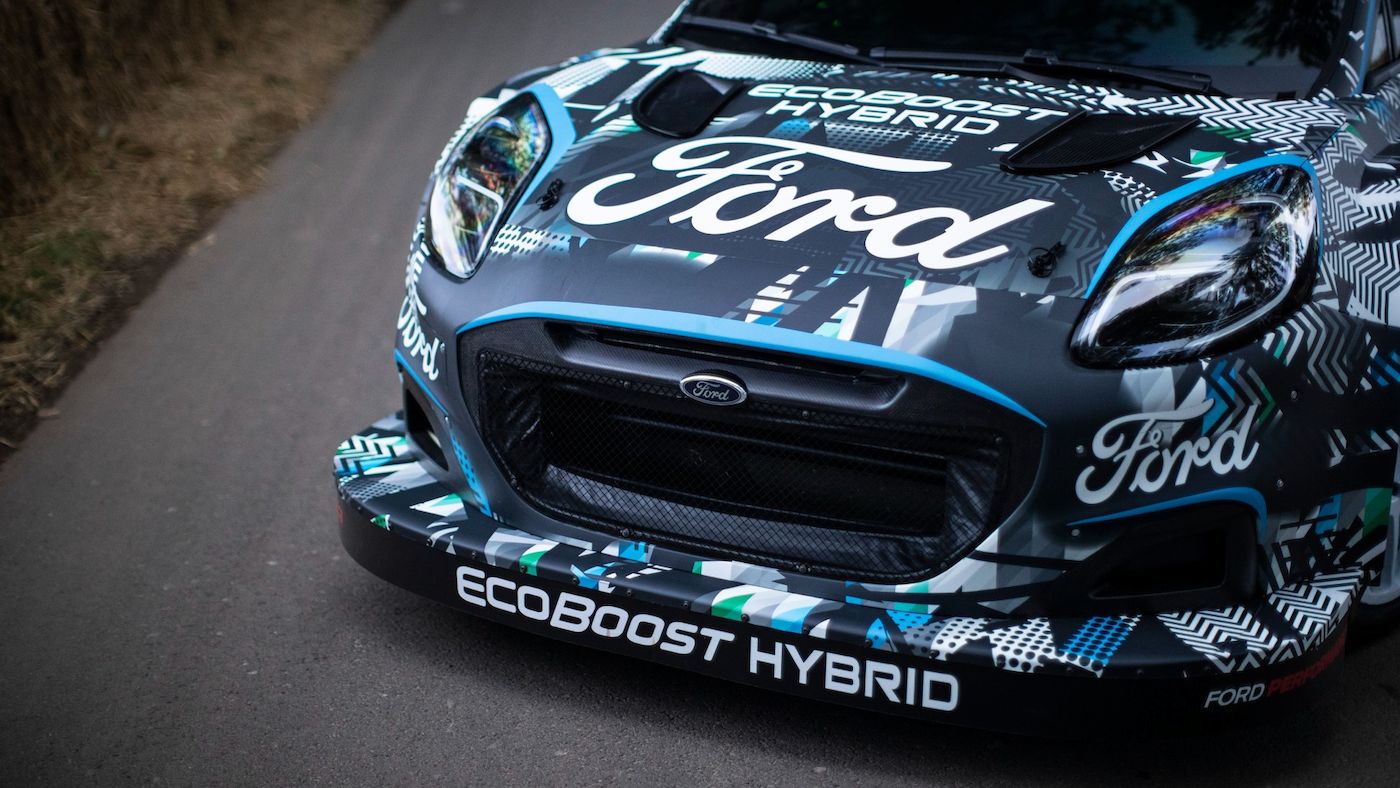 The images of the new Puma also show a slightly more prominent front splitter (but it could still be a visual effect).  A more prominent front splitter is more effective in reducing the amount of air entering under the car, thus reducing pressure there and increasing downforce. Also, the higher area of the splitter means that it can get more pressure down from the impact of that air flowing over it. These contributions will partly compensate for the smaller amount of downforce the new cars will be able to generate without some of the characteristic aero parts of the 2017 WRC car generation, such as dive planes or the side vertical fences (present in the Fiesta’s front splitter). 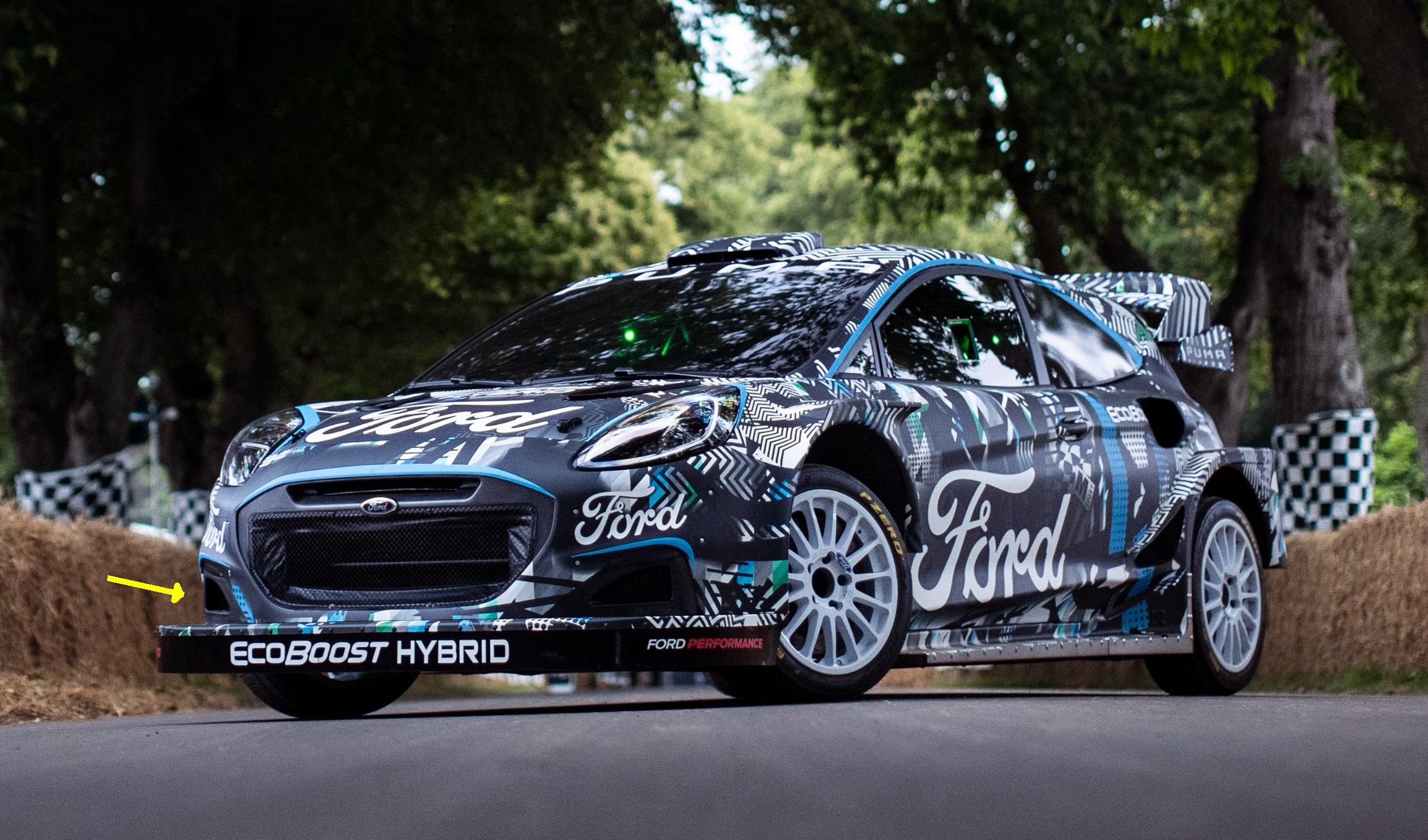 The front grille has also changed, due to the adoption of the Puma body. While the central grille is very similar to that of the Fiesta in size and shape, the lower grille (where leaves tended to accumulate) has disappeared, thus eliminating a potential source of problems for the new car. The consequence is that new air intakes for front brake cooling have been added (as shown by the arrow) on both sides of the front bumper.

No major differences can be observed between the mule test (on the left side of the image above) and the new Puma prototype (right side). The location o the side air intake is the same, as well as the aero parts (side skirts, side dive plane above the rear brake air intake, rear fender and rear wing). Note the lack of side mirrors in the Puma prototype, which will surely be added lately. Also, the rear lights and rear windows (camouflaged with stickers) are those of a Fiesta, confirming that the prototype is a mixture of both models.

The rear vent is also located at the same position of the mule test car (image below), sending the air above the rear diffuser area, thus helping to remove air from under the car (which contributes to reducing the pressure under it). 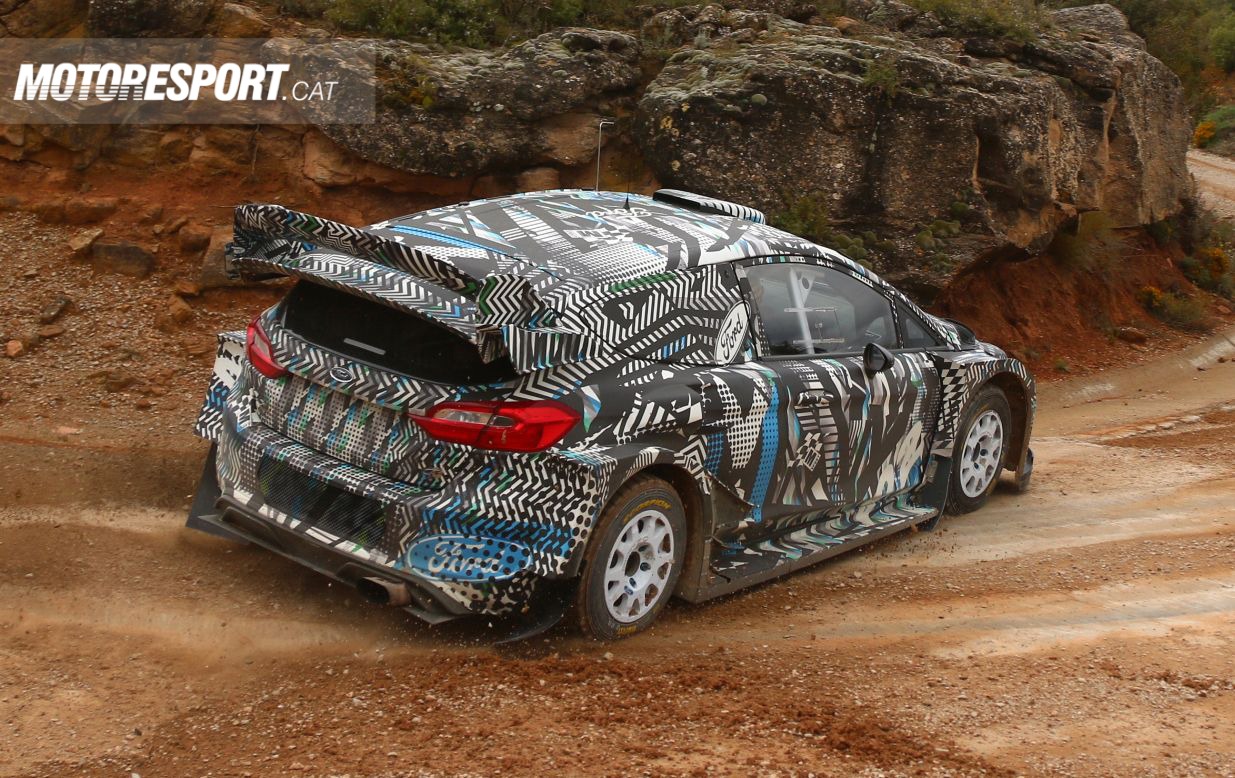 No other modifications from the test mule car can be observed at the rear. 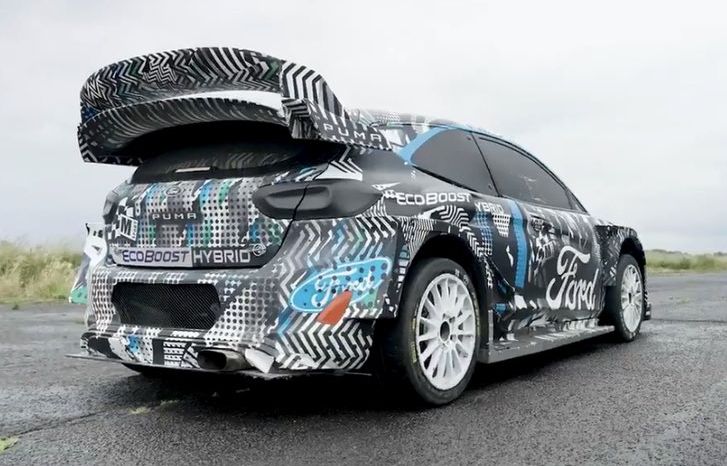 The press note released by MSport with these images adds some interesting details about the new car, such as the hybrid system is liquid- and air-cooled and housed in a ballistic-strength casing to resist the impact of debris and g-forces in the event of an accident, that the battery pack can also be recharged using an external power source at service points between stages, with a recharge taking approximately 25 minutes, weighting 95 kg. They also explain the hybrid operation system in detail: the powertrain captures energy normally lost during braking and coasting and stores it in a battery that can power an electric motor to enhance the road car’s fuel efficiency or provide a performance boost – in the case of Puma Rally1 as much as 100 kW for multiple boosts of up to three seconds during competitive driving.

The Ford Puma Rally1 prototype car shown in the pictures will be used as a development car ahead of the 2022 season.

Later, in an interview with DirtFish, Malcolm Wilson confirmed the higher involvement from Ford with the 2022 car. They had access to the moving floor wind tunnel from the beginning, while in 2016 the Fiesta WRC was developed with no wind tunnel support. He confirmed Ford participated in the process since the beginning (early 2020), in the modelling and simulations, with full access to Ford’s simulation resources, while in 2016 the simulations were carried out by an external company (TotalSim). 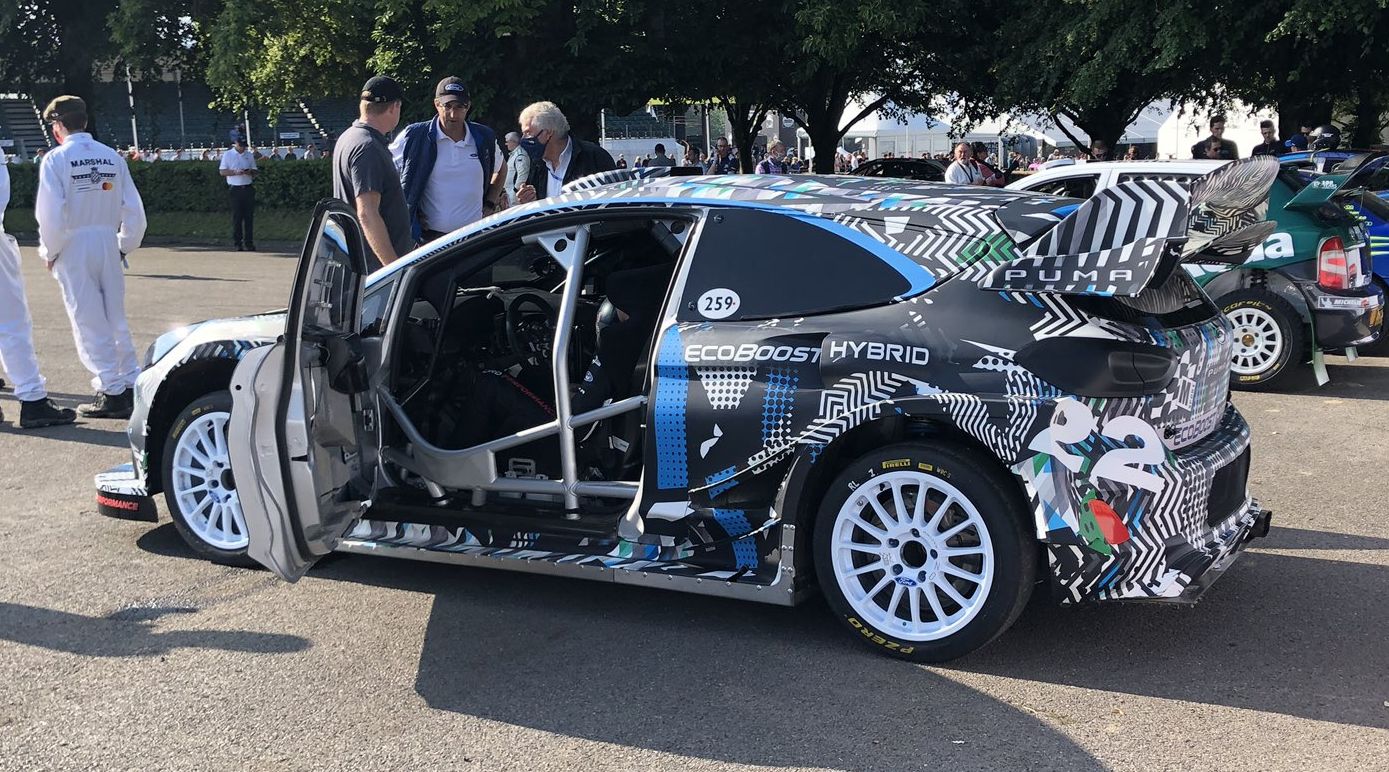 During the car’s first runs at the Goodwood Festival of Speed, new images of the car allowed to see some other details, such as the safety crash cell (above) or the side air intake (below). 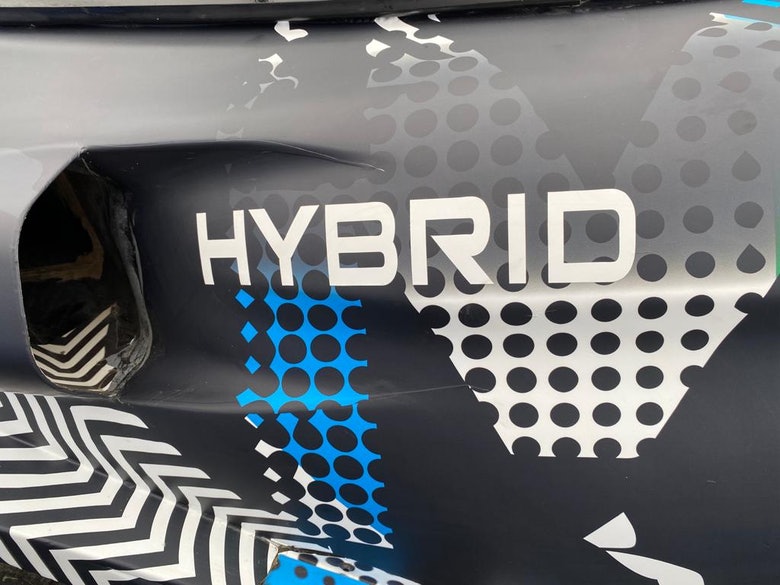