The participation of Andreas Bakkerud and Janis Baumanis this weekend in the Euro RX1 category in Höljes (Sweden) will also represent the return to the track of the Škoda Fabia WRX Evo, the car built and aligned by Ernestas Staponkus’s ESmotorsport team. To celebrate such a return, we aim to review the process of aero optimization of the car, which is derived from the Škoda Fabia Evo Rally2 car. 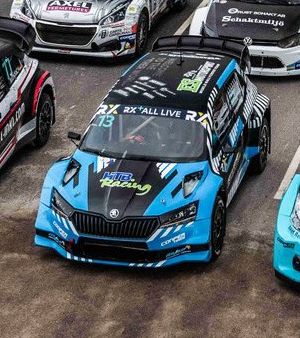 After an eventful season in 2019, when up to four different drivers drove the Škoda Fabia WRX (Rokas Baciuskas, Kevin Abbring, François Duval and Matvey Furazhkin) plus some others participated in its development (Mads Østberg and Nasser Al Attiyah), the team decided to acquire a Škoda Fabia Evo for the next season. As in the previous year, the body of the car was modified, in order to improve its aero performance, adapting it to the requirements of rallycross: a compromise between low drag, to get top speed, especially at the start of the races, and high downforce, for faster cornering. As in 2019, Blue Engineering was in charge of the modification, led by ex-driver Jiří Gottwald, while the new aero parts were manufactured by the Latvian company RX Carbon. 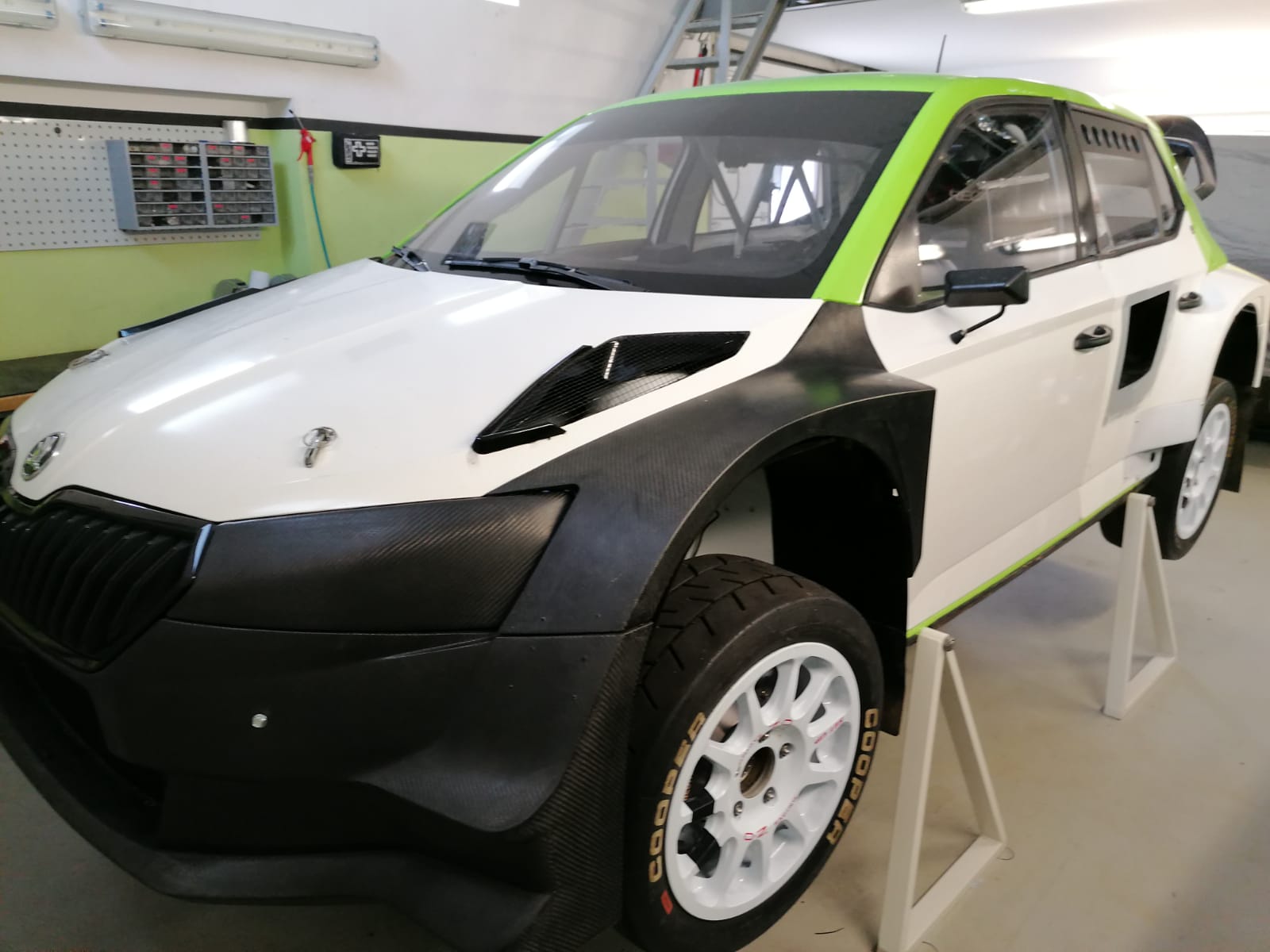 The new design of the car included a modified front bumper on both sides of the front grille. The original design of the Fabia Evo Rally2 included a lip at approximately half the height of the wheel (see image below). In the Fabia Evo RX, this lip (1a in the picture) was made more prominent. In addition, a second lip (1b) was added at the bottom sides of the bumper, as a prolongation of the front splitter. As a result, the space between the two lips acts as an air curtain or recess (2) designed to allow air to flow towards the sides of the car (as the yellow arrow shows). The result was a reduction in air resistance (drag), allowing the car to reach higher top speeds, which for sure will be useful in the starting line of any RX race, to reach the first corner faster. 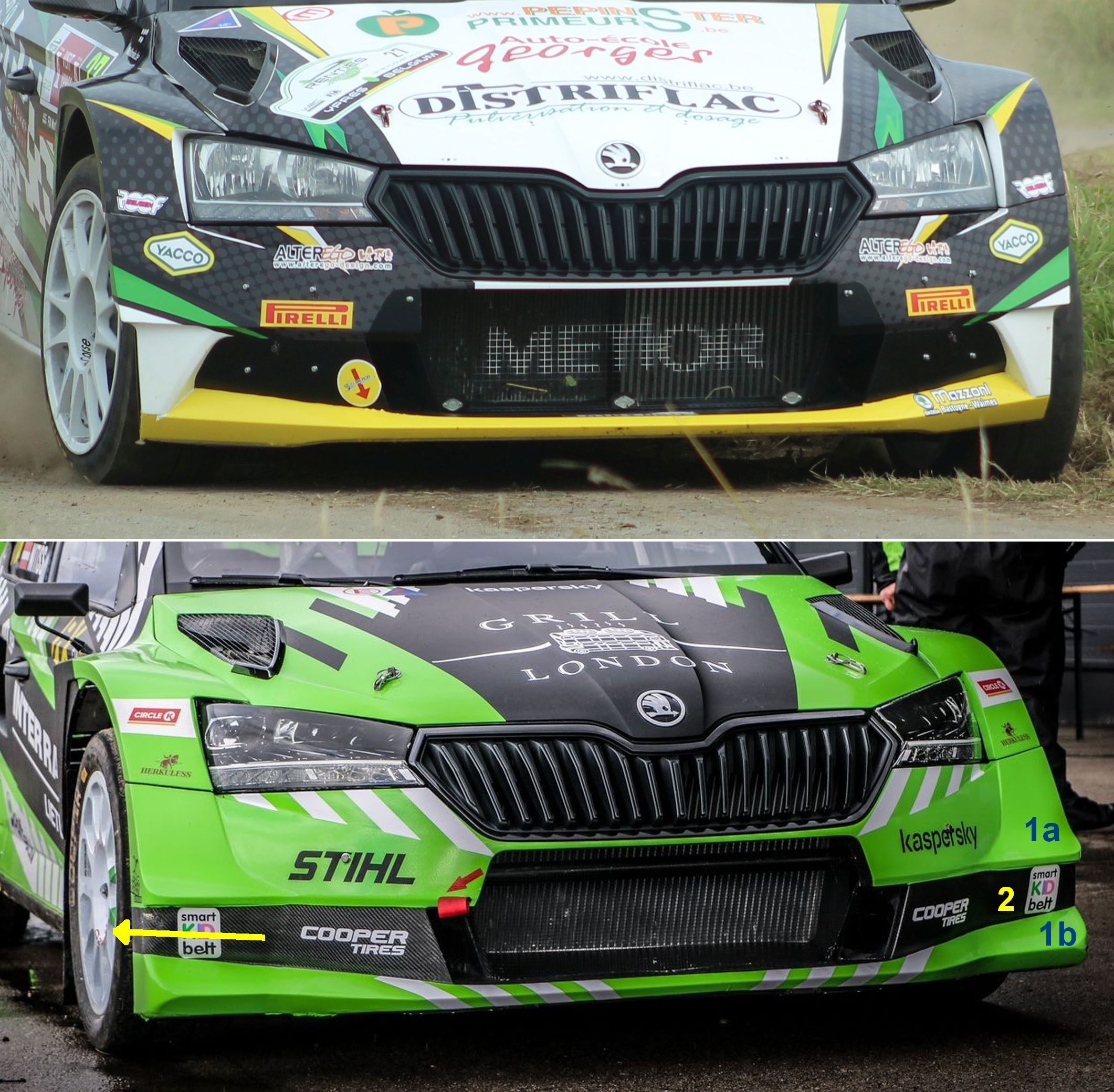 The second (lower) lip on both sides of the bumper also contributed to making the front splitter sharper, thus more effective in limiting the amount of air flowing under the car. The lower the amount of air flowing in this area, the higher the airspeed, which, by Bernoulli (faster flow means lower pressure) represents a decrease in pressure under the car and, by extension, an increase in downforce generation capacity.

The second main modification can be distinguished at the rear of the front (3) and rear fenders (4), with the addition of fender vents. 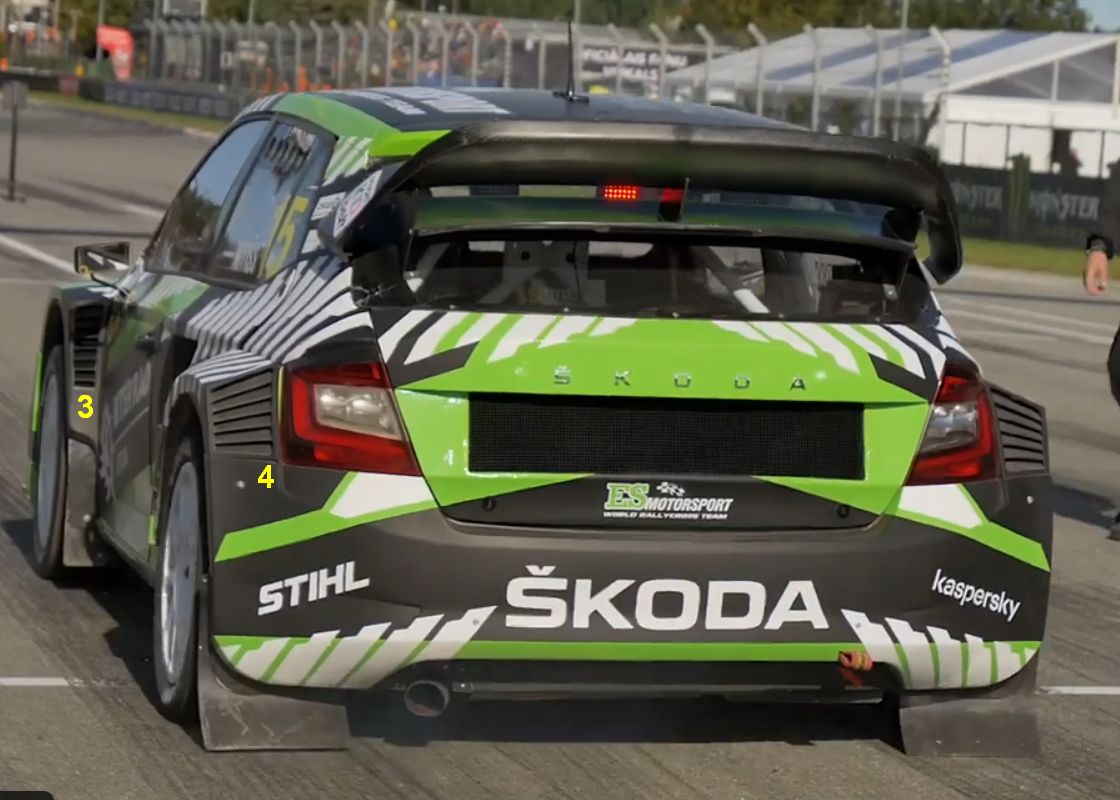 The fender vents are designed to remove the air from the wheel spaces and, consequently, from under the car. Less air under the car means less pressure. Also, the car remains closer to the road, the airflow under the car is reduced and accelerated (again decreasing pressure, by Bernoulli).  The final result is that more grip is obtained and the car becomes faster in the corners. 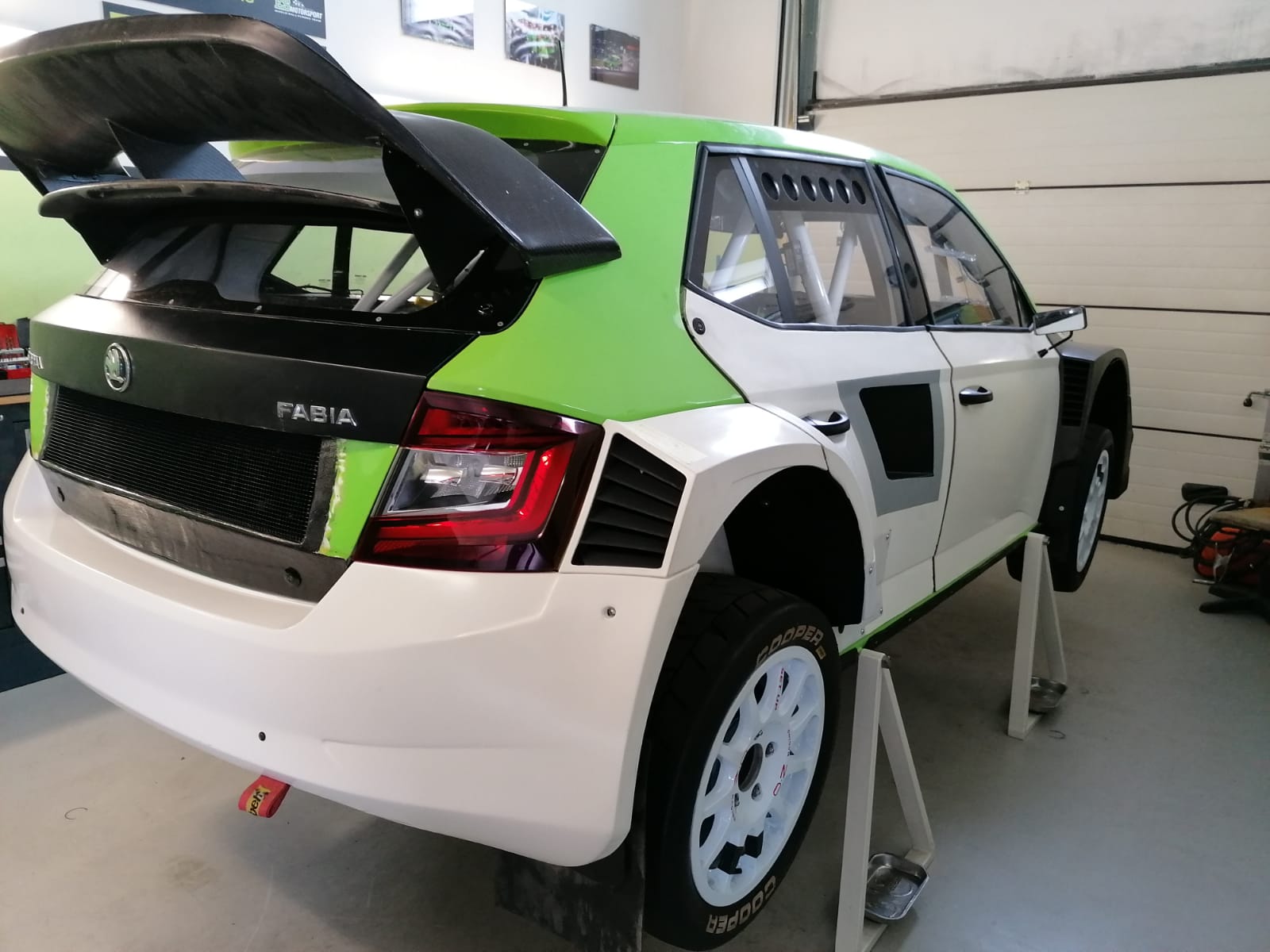 The goals set for the modifications (drag reduction and downforce generation increase) were fully met with these modifications (front bumper and fender vents). But, to become a real Supercar, there was still one major change to do: the relocation of the engine radiators to the rear of the car. This modification has many advantages for an RX Supercar: a) radiators are in a safer position, as RX is a contact sport and most of the collisions involve the front end of the cars, and b) the weight distribution of the car improves, as part of the weight is now located at the rear of the car, making the car easy to drive. 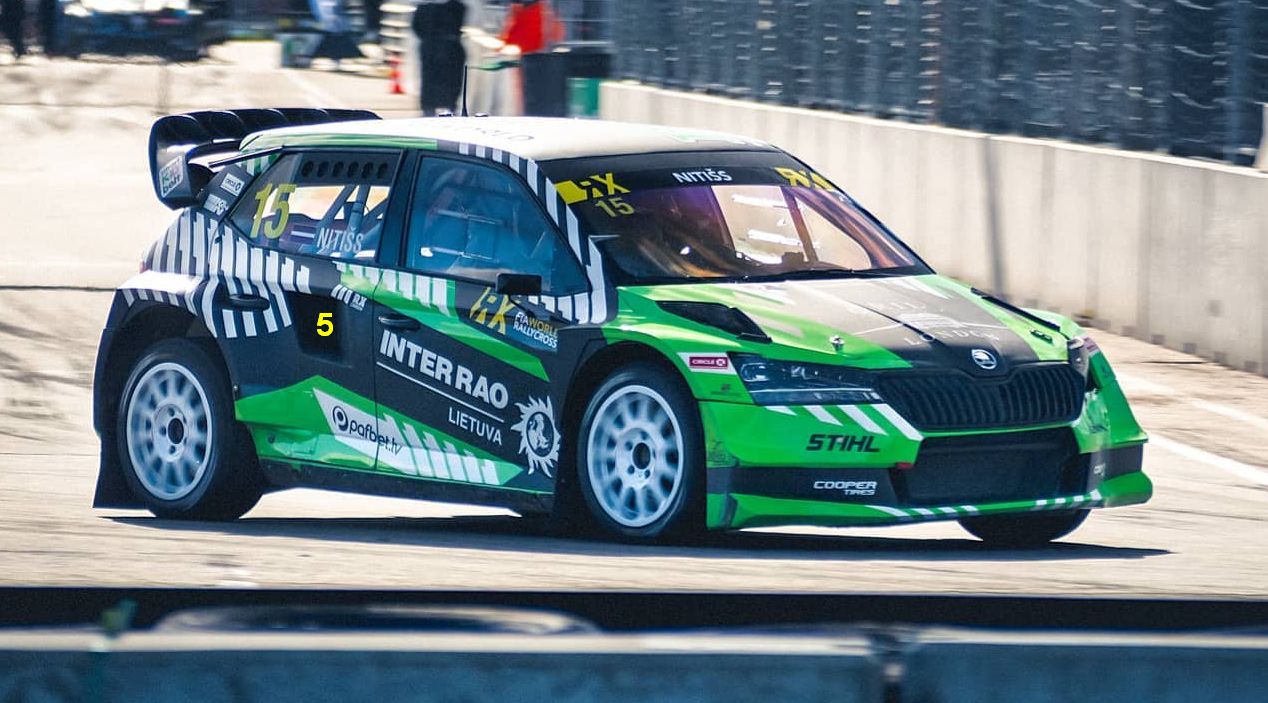 But locating the radiators at the rear of the car has also negative implications, especially for the aerodynamics of the car. In order to allow air entering into the rear for cooling purposes, side intakes were introduced. 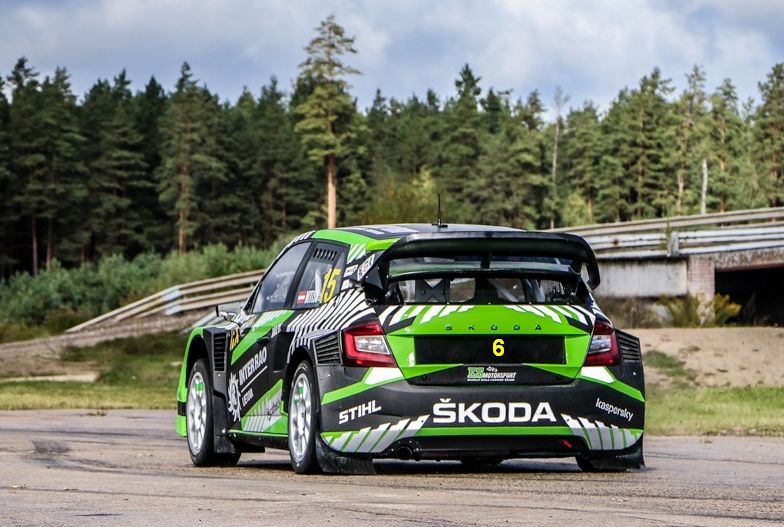 Air entering into the side intakes is conducted towards the rear radiators. The design of the inner circuit was carefully evaluated to ensure minimal pressure drop of air, in order to maximize its cooling capacity. After crossing the radiators, the hot air is removed through a rear vent (6), located at the center of the rear door. Air is sent to the center of the car wake, which contributes to reducing air recirculation behind the car, which is known to cause drag. This is the only aero benefit of the rear radiator disposition, the reduction in drag due to a cleaner car’s wake. 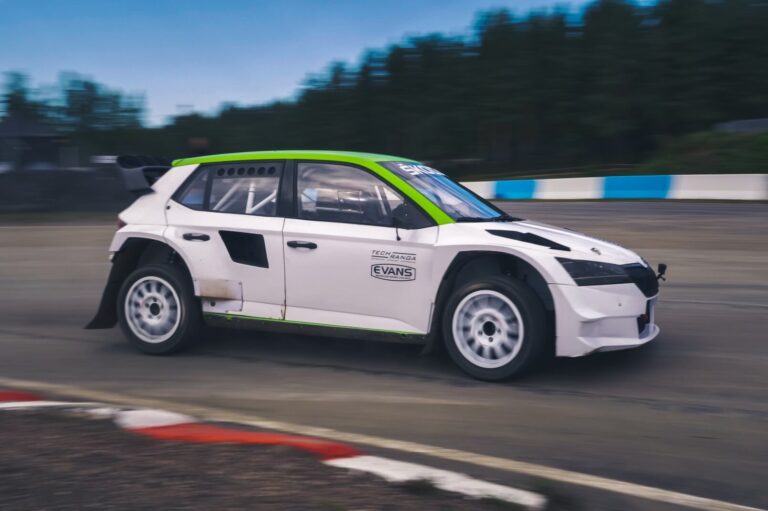 The Škoda Fabia WRX Evo car was designed and built in the first half of 2020. The modifications were tested on the circuit. Due to Covid-19, the 2020 season was reduced to 4 rounds (8 events). ESmotorsport team only took part in the two races of the Latvian event, held in Riga, with Reiniss Nitiss at the wheel, with a 10th position (5th in the semifinal) as the best result. 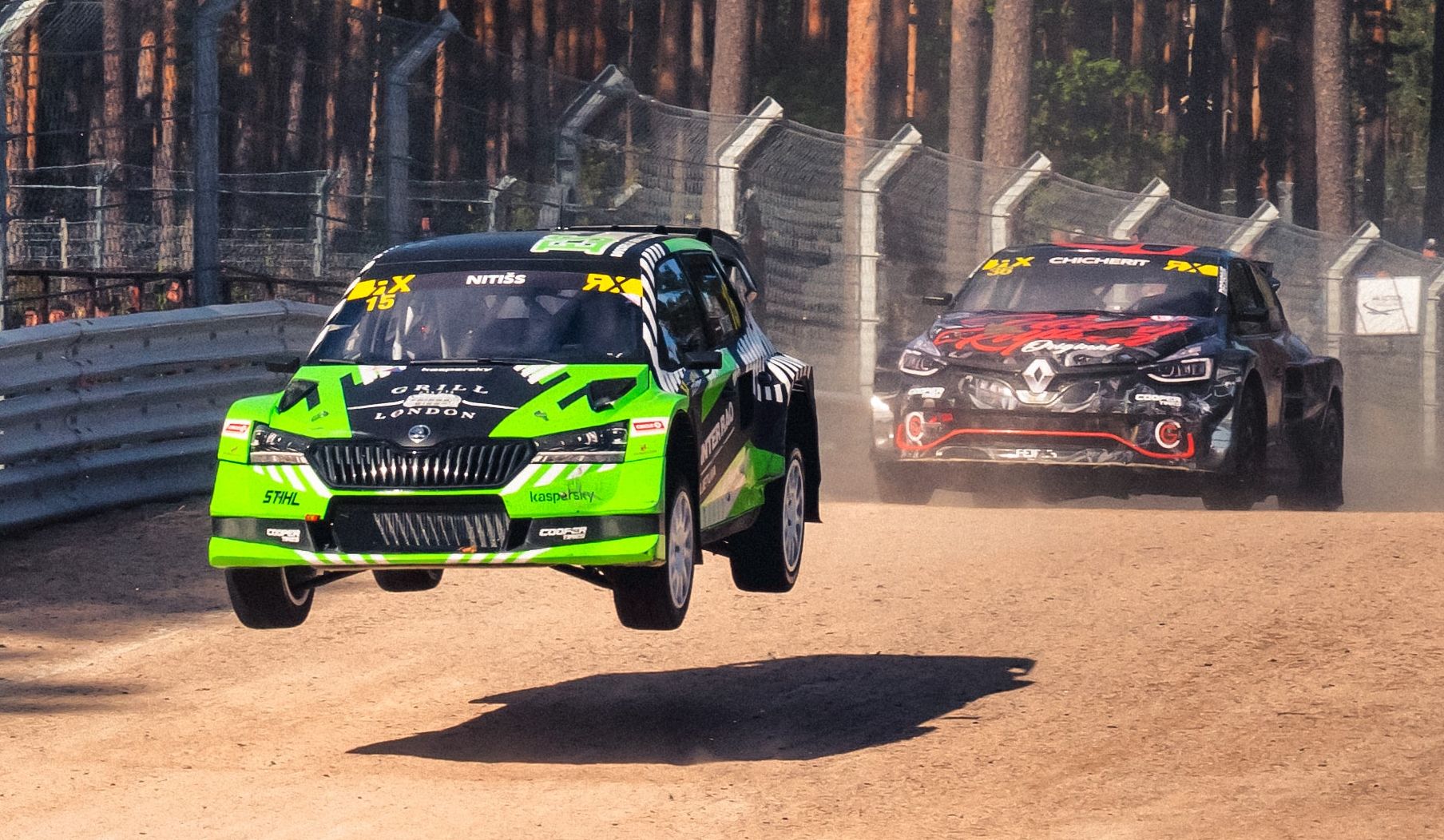 We’re sure that great results await ESmotorsport in this new season, as a fruit of the elaborated development work undertaken by the team in the last year.

2 thoughts on “Aerodynamics of the ESmotorsport Škoda Fabia WRX Evo”