The custom aero package of the Subaru WRX STI has been gradually upgraded in the last two events of the 2021 ARA Championship. The main modifications appeared in the three cars present in the Southern Ohio Forest Rally, while still some refinements were introduced in the next event, the New England Forest Rally. The aim of the modifications developed by Vermont SportsCar is what we will try to explain in the following lines, on a car that had not been modified since 2019. 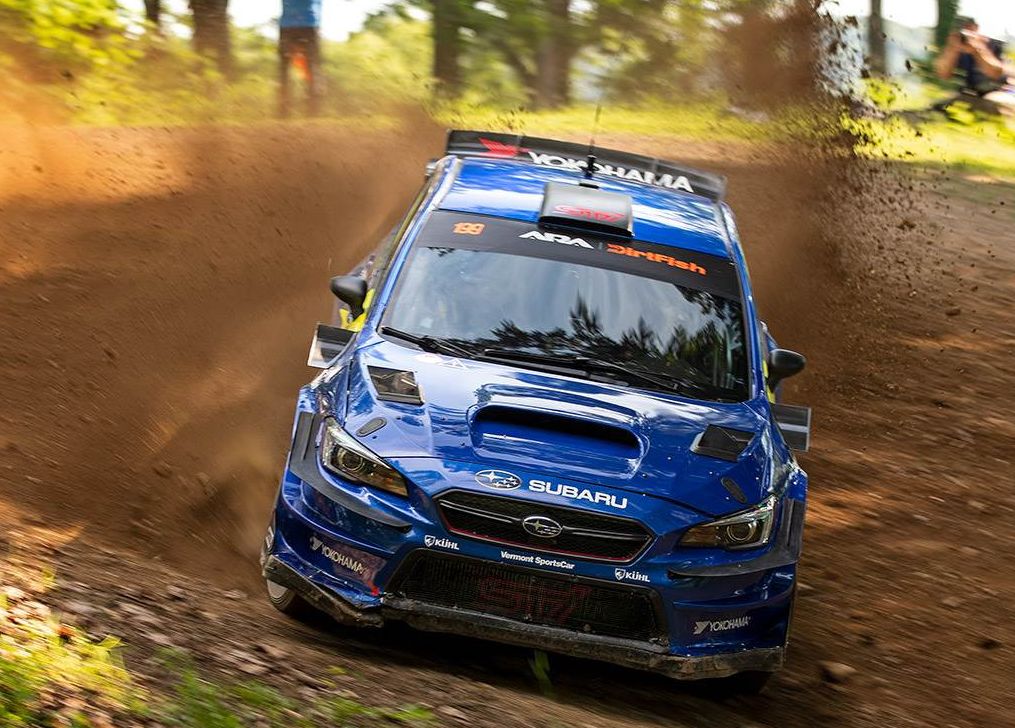 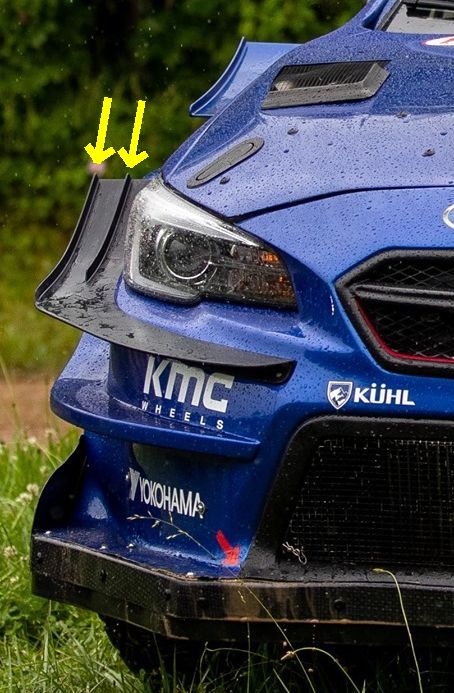 In Southern Ohio, the planes included an external lip and a central lip (see yellow arrows), both presumably designed to better channel air towards the side of the car.

The central lip was removed in the two official cars in the next (New England) event, while still present in the car driven by Ken Block and Alex Gelsomino (left in the picture above). In all three cars, the external lip remained untouched. 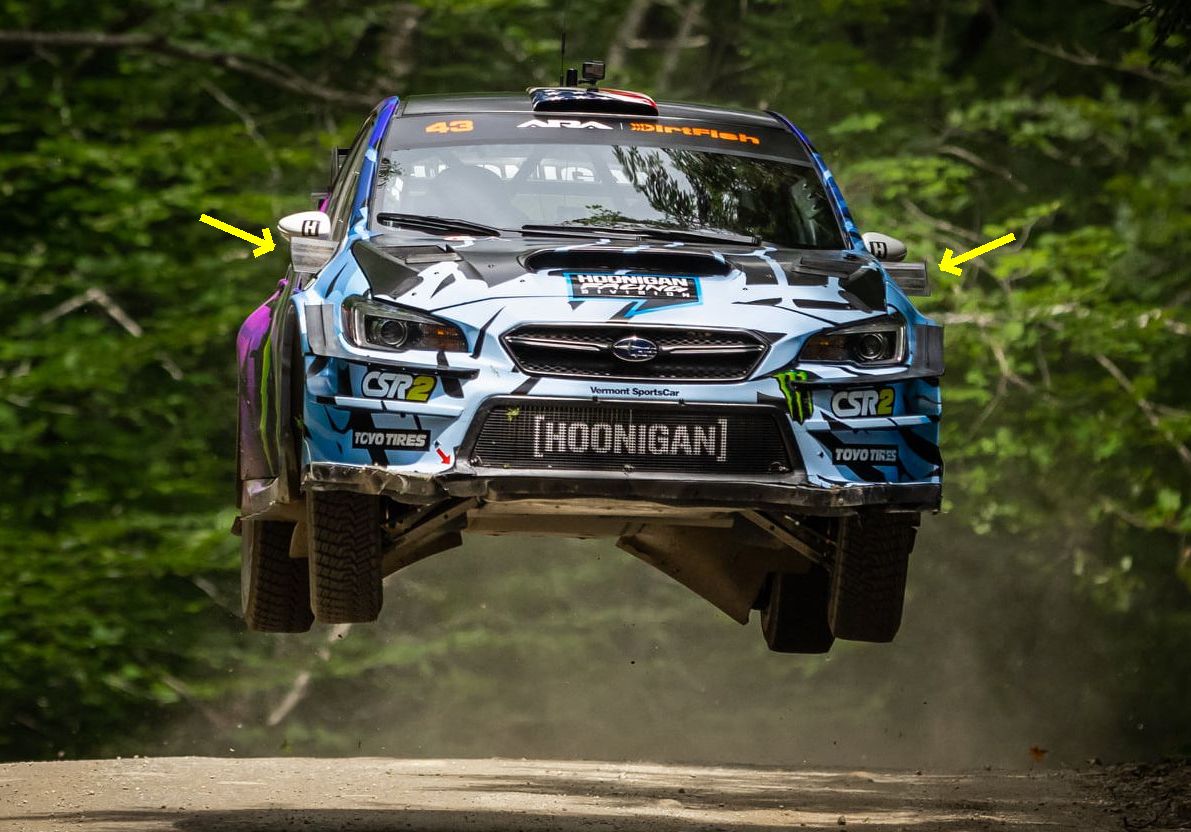 The second main modification was the addition of a deflector on top of the front fenders (see the yellow arrows in the image above), also with an external lip. The goal of the deflector would be to send a cleaner airflow towards the rear wing, as airflow is now sent over the side mirrors. In this case, cleaner means faster airflow.

The role of the deflectors is similar to that used by Toyota in the Yaris WRC (right side on the image above). The downforce is generated by the impact of the airflow over the almost vertical deflector, while air is deviated over the side mirror, to minimize interaction with this object in its path towards the rear wing. But such a vertical disposition represents an increase in the front area, which translates into higher air resistance (drag), in both cases.

The third main modification introduced in the last events concerns the rear wing. Since Southern Ohio, two side fenders, with the shape of an inverted wing, have been added on the external side of the endplates (see inside the yellow circle in the picture above). The goal is to generate additional downforce, by getting advantage of the clean air stream flowing on both sides of the car.

Note that the addition of lips on the new front plane and the addition of the deflector are all oriented to send a cleaner airflow towards the side fenders (as shown by the yellow arrows in the image above), to make them more effective in downforce generation. They also contribute to give more stability at the rear while cornering.

The new rear wing includes bigger, flat endplates and lower wing, instead of the semi-round previous design. The vertical slots crossing from upper to lower wing have been removed on its lower part, while still vertical strakes are visible on the top of the upper wing, with a greater height than in the previous design. The most probable reason for this modification is to allow a faster airflow under the wing. Faster flow means, by Bernoulli, lower pressure. Thus, with this modification, the upper wing is more effective in generating downforce, as the pressure under it has been reduced. 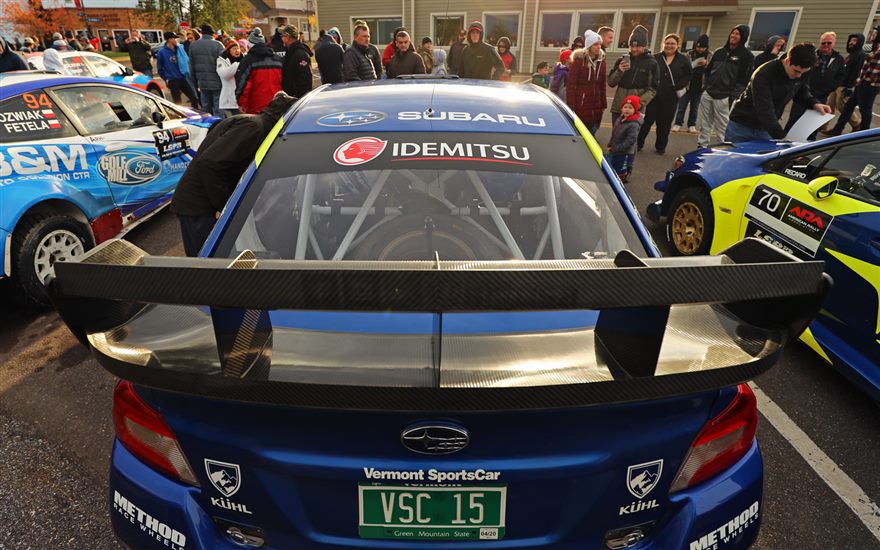 The number of vertical slots was reduced from 3 in the previous design of the wing, to 2 in the rear wing used in Southern Ohio. 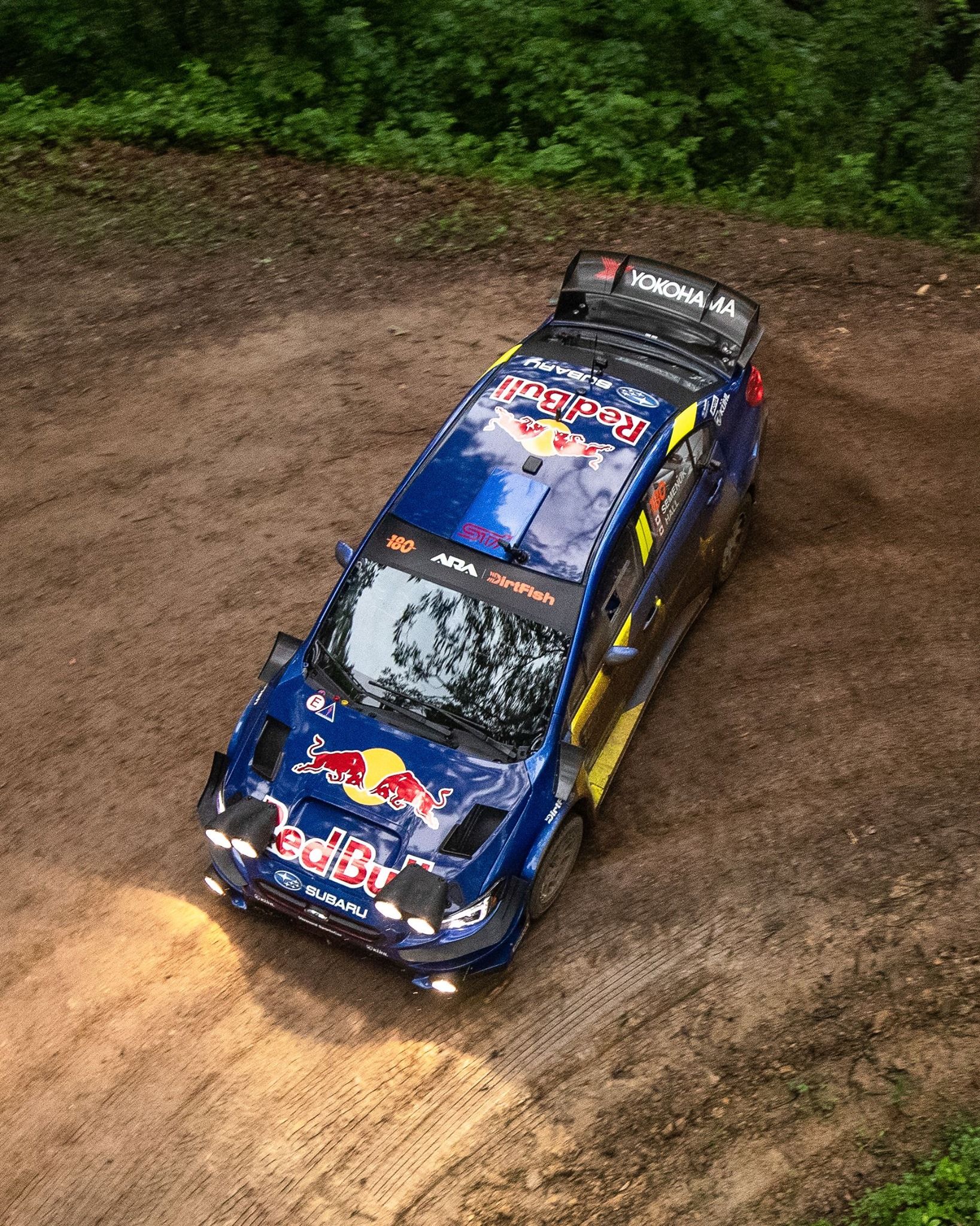 However, the third vertical slot returned to the rear wing in the New England event. These slots are useful to generate downforce while cornering, for it seems logical to maintain the third one, to get as much downforce as possible on every condition.

In summary, different modifications to improve front and (mostly) rear grip (thanks to higher downforce), even at the cost of some penalty in terms of lower top speed (due to the higher drag), to make the Subaru Motorsports USA cars even more competitive against the growing competence, led this year by the Ford Fiesta WRC of McKenna Motorsports (even though they have just pulled out from the next event, the Ojibwe Forests Rally.

It is still possible that new refinements appear in the next events, as it happened in New England, as still some fast events of the season are to be run, such as the Oregon Trail Rally, where average speeds close to 130 km/h or 80 mph are expected. If this is the case, we will continue to review them, as usual.