The recent tests developed on tarmac and gravel by MSport with the Ford Puma Rally1 in Central Catalonia represented a great opportunity to know the new car in deep detail. During the test, five aero details caught our attention, which we would like to share with you. 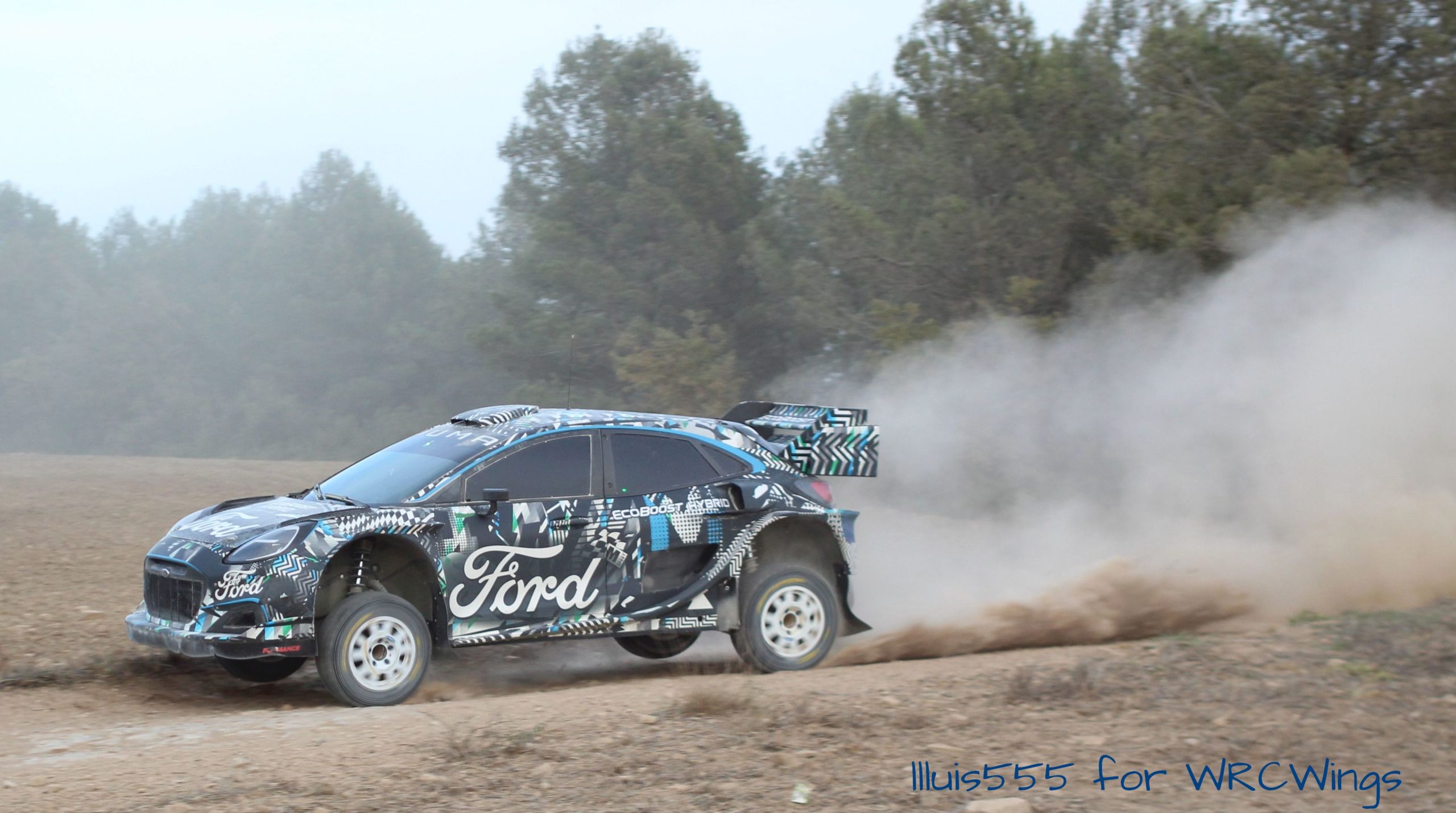 The design of the side ends of the front fenders is different from what we had seen in other cars. Instead of the typical fences included in most of the 2017 WRC cars, the front splitter of the Puma Rally1 includes a new shape, with an internal profile that appears to be designed to smoothly induce airflow to the front fender, while preventing it from flowing to the sides of the car. The result of this new design would be a small reduction in drag (due to the smoother path) as well as a small increase in front grip, as more air is forced to flow against the front fenders, thus these can generate some more downforce. 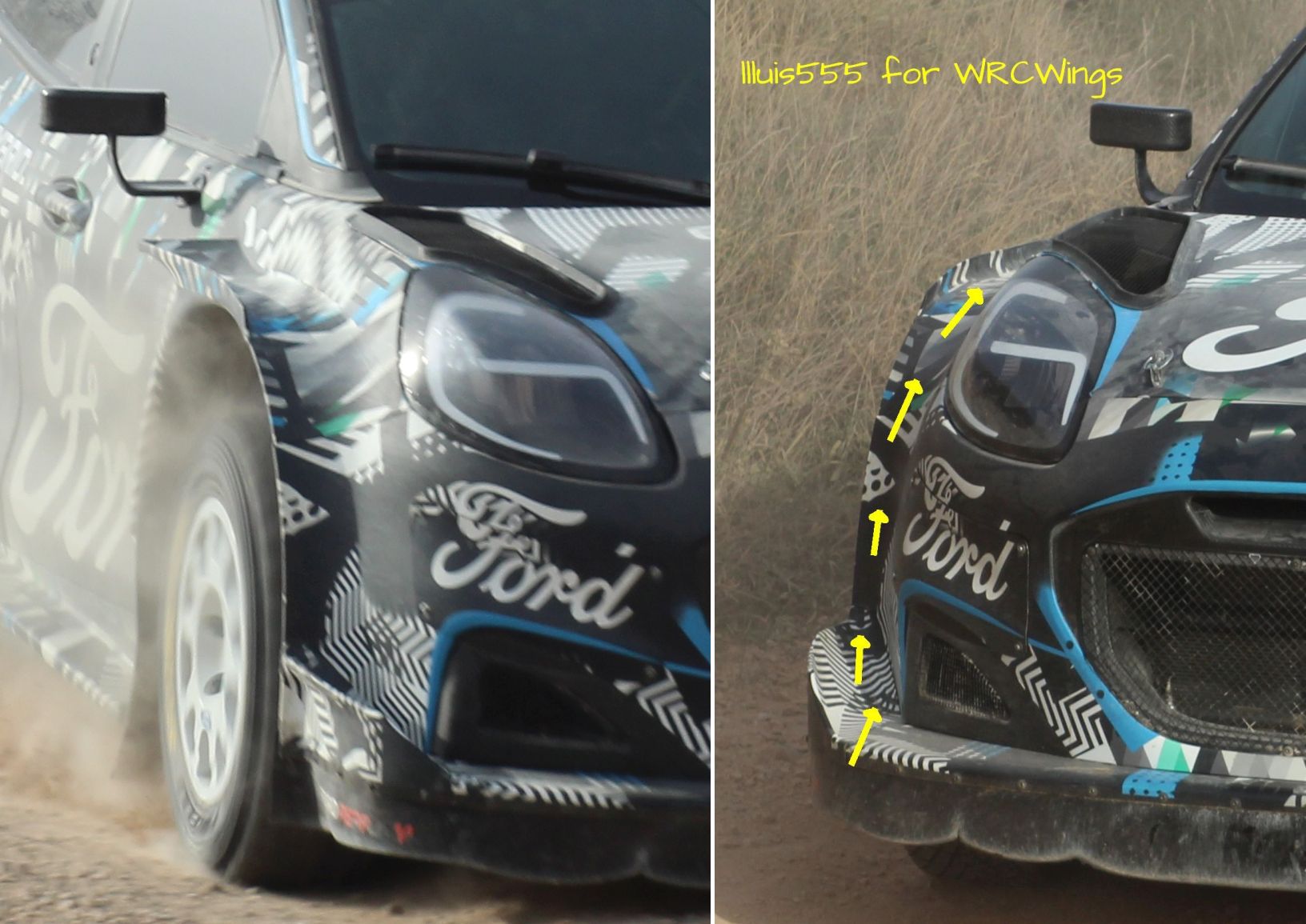 The design of the top of the front fender is also slightly different from that of the Fiesta WRC. Rounded fender shape, with the side lip only on top, and terminated again with an inverted-wing shape to generate some more downforce, while forcing air to flow over the side mirror support, also with the same profile of a small inverted wing… any small detail counts.

The Ford Puma Rally1 side mirrors are placed at a height similar to that of the upper side air intake (see the yellow circle in the image below). This could represent a limitation in the amount of air entering into that intake, which might reduce the hybrid system’s cooling capacity. For this reason, it would not be surprising that the side mirrors were lifted in the future, although a new solution should be carefully studied, in order not to impact the performance of the rear wing side winglets.

The prominent location of the upper side air intakes allows for the collection of vegetables (as shown in the picture below), which could also significantly reduce the airflow for cooling the hybrid system. 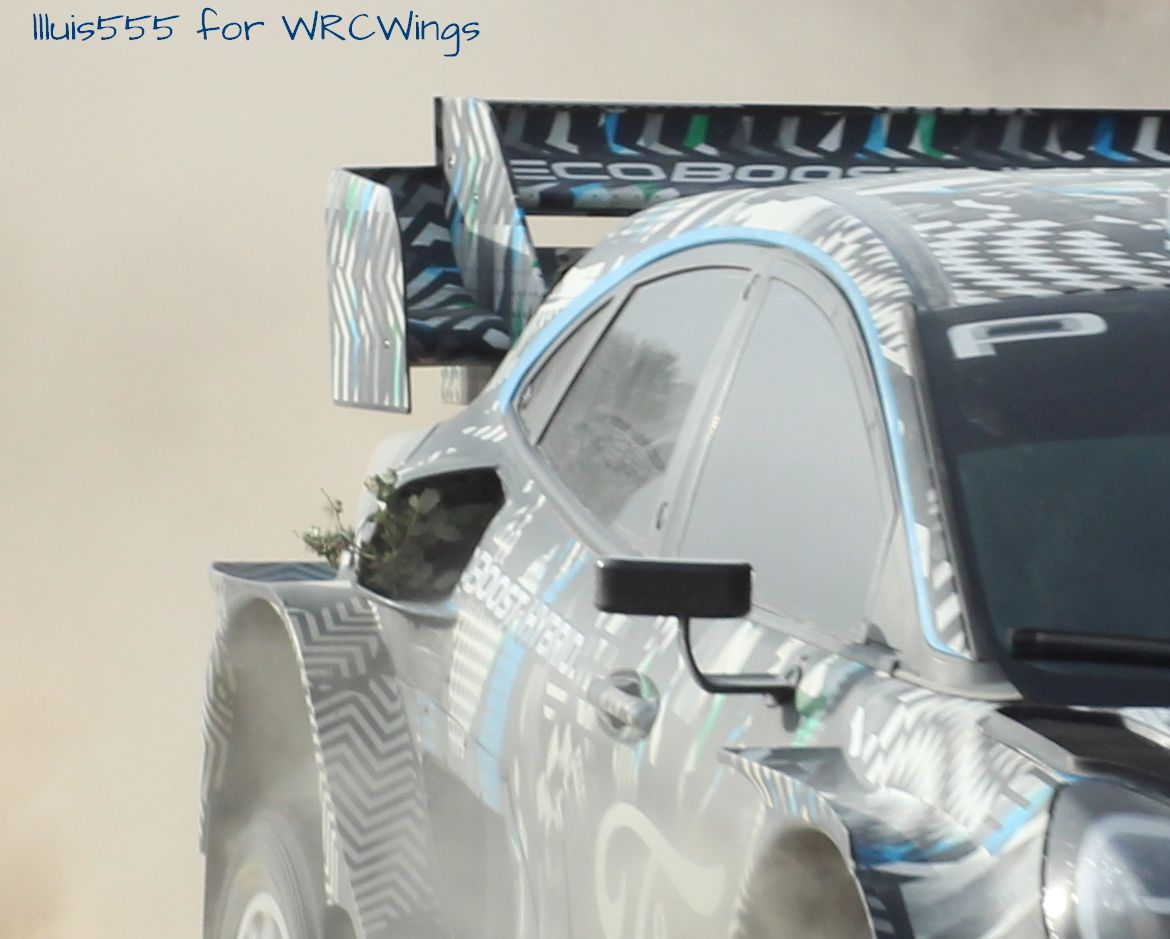 To prevent this problem, the side intakes include a small protective grid to filter air and prevent vegetals accumulation, as shown in the image below… but it is not always fully effective. 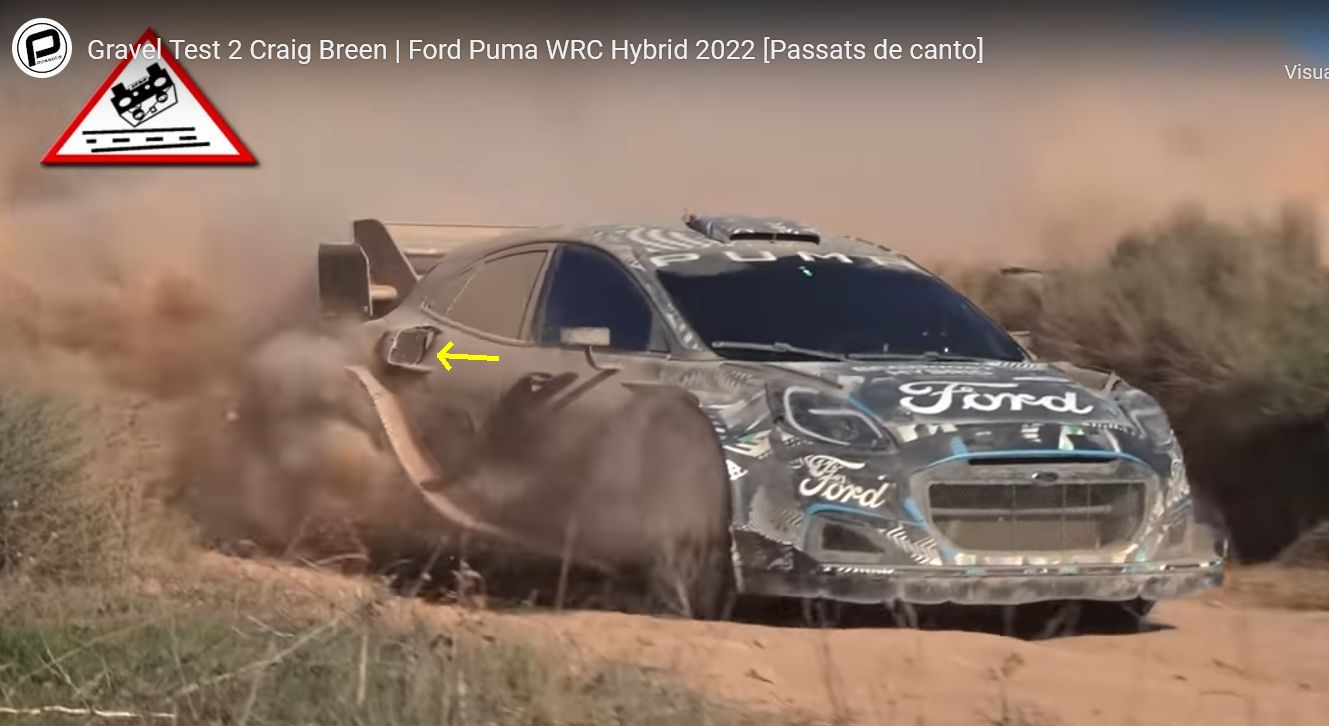 The lower intake is also protected by a grid, due to its location close to the road, in an area where a lot of dust usually accumulates. 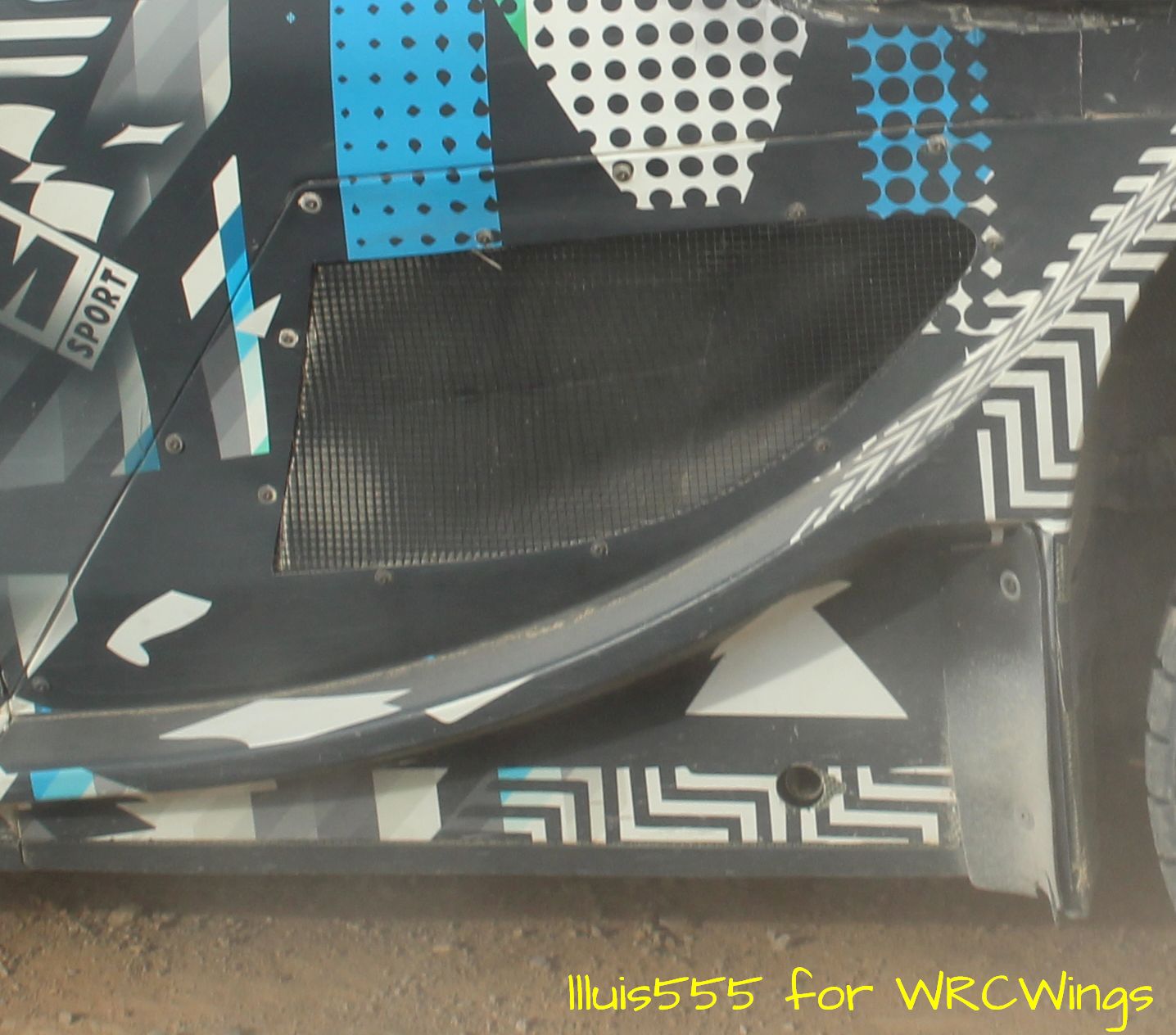 The image above shows a portion of the side skirt, which in the new Puma is not fully parallel to the car floor. Instead, the skirt has been connected to the small dive plane existing on the sides of the Fiesta WRC, and it now extends to the rear fender. The result is that air flowing over the skirt is sent to the rear fender, thus generating slightly more downforce on the rear wheels. 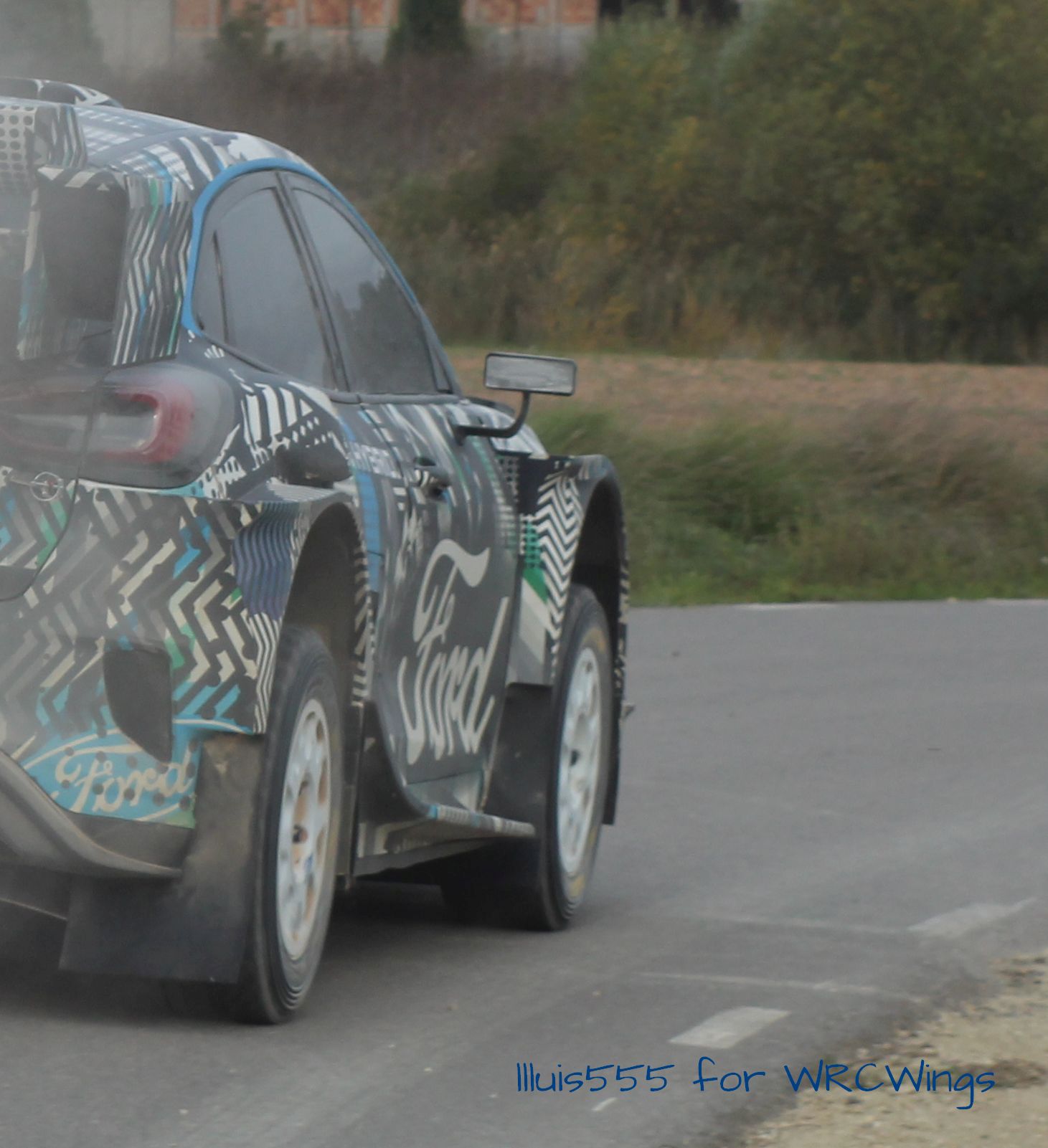 The main goal of side skirts is to prevent air flowing on both sides of the car from entering under the car. The raised back of the Puma’s skirt leaves a certain amount of space for air to potentially get under the car, thus increasing pressure there (and reducing downforce), for what this new design could make them less efficient on their main role, but compensated by a higher downforce generated over the skirt.

The front images from the Ford Puma Rally1 seem to suggest that the rear wing has been lowered, and it is not visible anymore in a frontal projection. This means that the new regulations would have turned into the 2013-2016 philosophy at this point, (when the rear aerodynamic device had to be entirely contained within the frontal projection of the car). This was changed during the period 2017-2021, as the rear wing could be raised by 50 mm, and it was visible in front pictures. 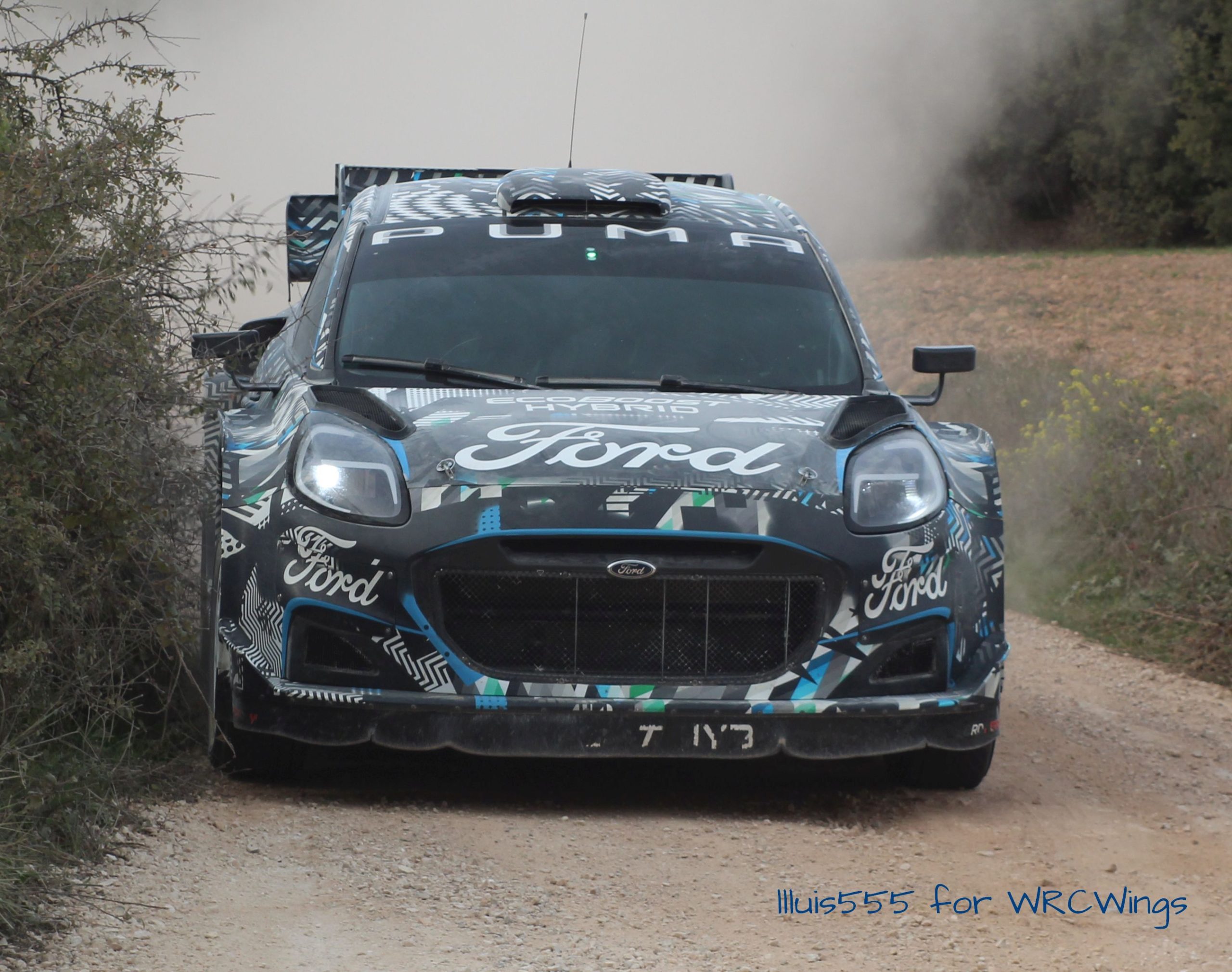 The inclusion of a fan for removing hot air from the hybrid unit cooling system is a solution already seen in other cars with rear cooling (such as RX supercars). The difference is in the location of the fan (and the vent). While in RX supercars, the vent is usually located at the center height of the rear door, in the new generation of Rally1 cars, the vent is located right above the location of the rear diffuser. The reason why is to allow transferring some energy from the fan-impulsed hot air to the air flowing under the car and expelled through the diffuser.

The only problem, for the Puma, is that it does not include a real diffuser: the angle in that area seems too steep to allow air to flow faster under the car, while for an effective diffuser, angles around 10-15º are considered to be the most efficient. Thus, the amount of air expelled by the rear diffuser would be smaller than expected, and the energy transfer would not be totally exploited.

All in all, a lot of interesting details in the latest evolution of the Ford Puma Rally1 test mule. There may still be a few changes to come before the homologation date, but from what we’ve seen in testing, it seems confirmed that excitement is assured for the next years. 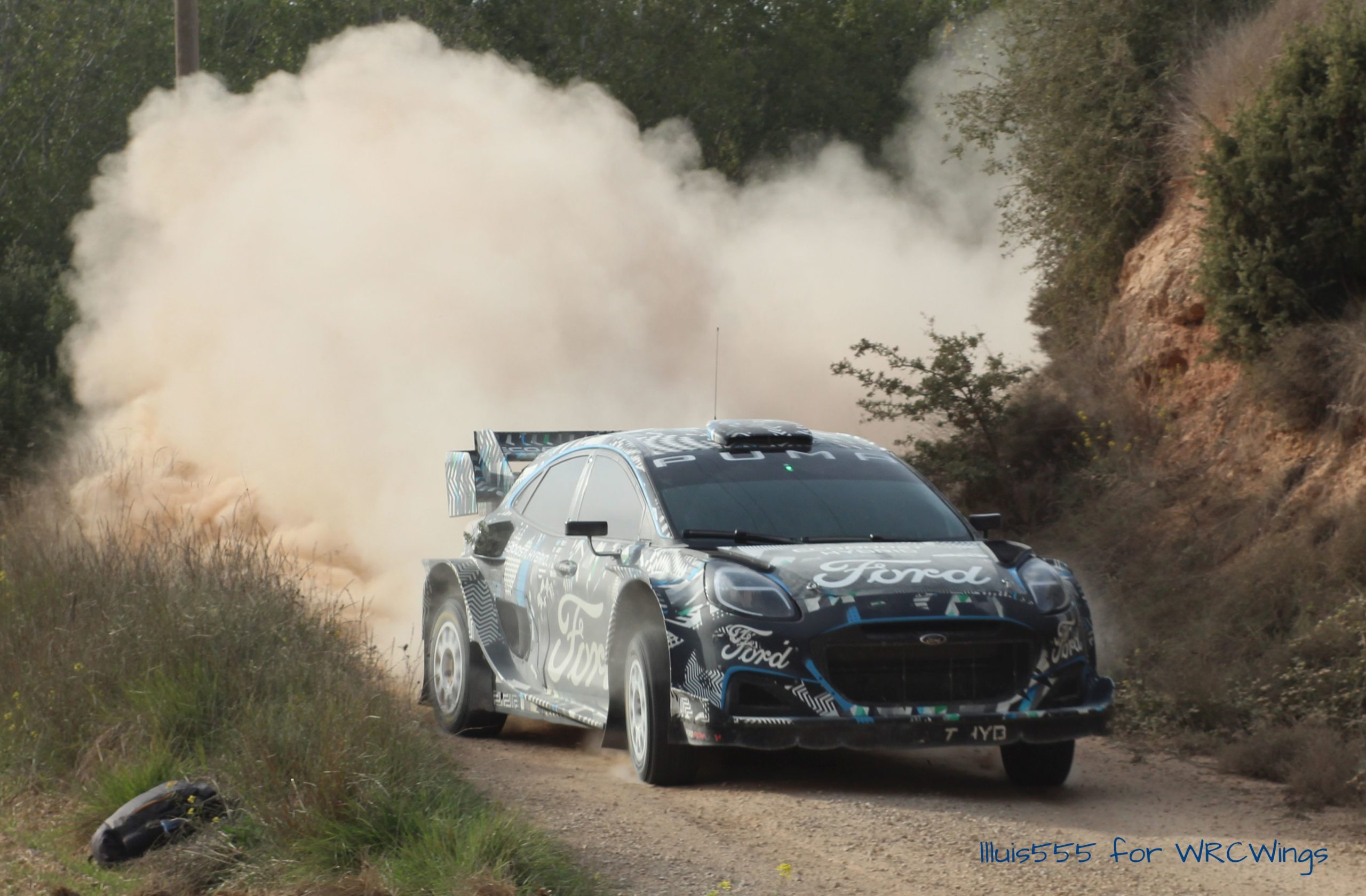