The development testing season for the 2022 Rally1 cars is reaching its climax as the end of the year approaches, with the design phase almost complete and the teams have already started the homologation process. Now it’s time to test the final designs, so we can discover some of the new solutions for the cars. This week, it was Toyota who tested the 2022 GR Yaris Rally1 car on some gravel roads of Central Catalonia. And the car used in these tests showed significant aero modifications at the rear that are worth reviewing.

The redesign of the hybrid cooling system is one of the main modifications in the car seen in the test. On one side, the size of the side air intakes has been reduced, as shown by the image below. 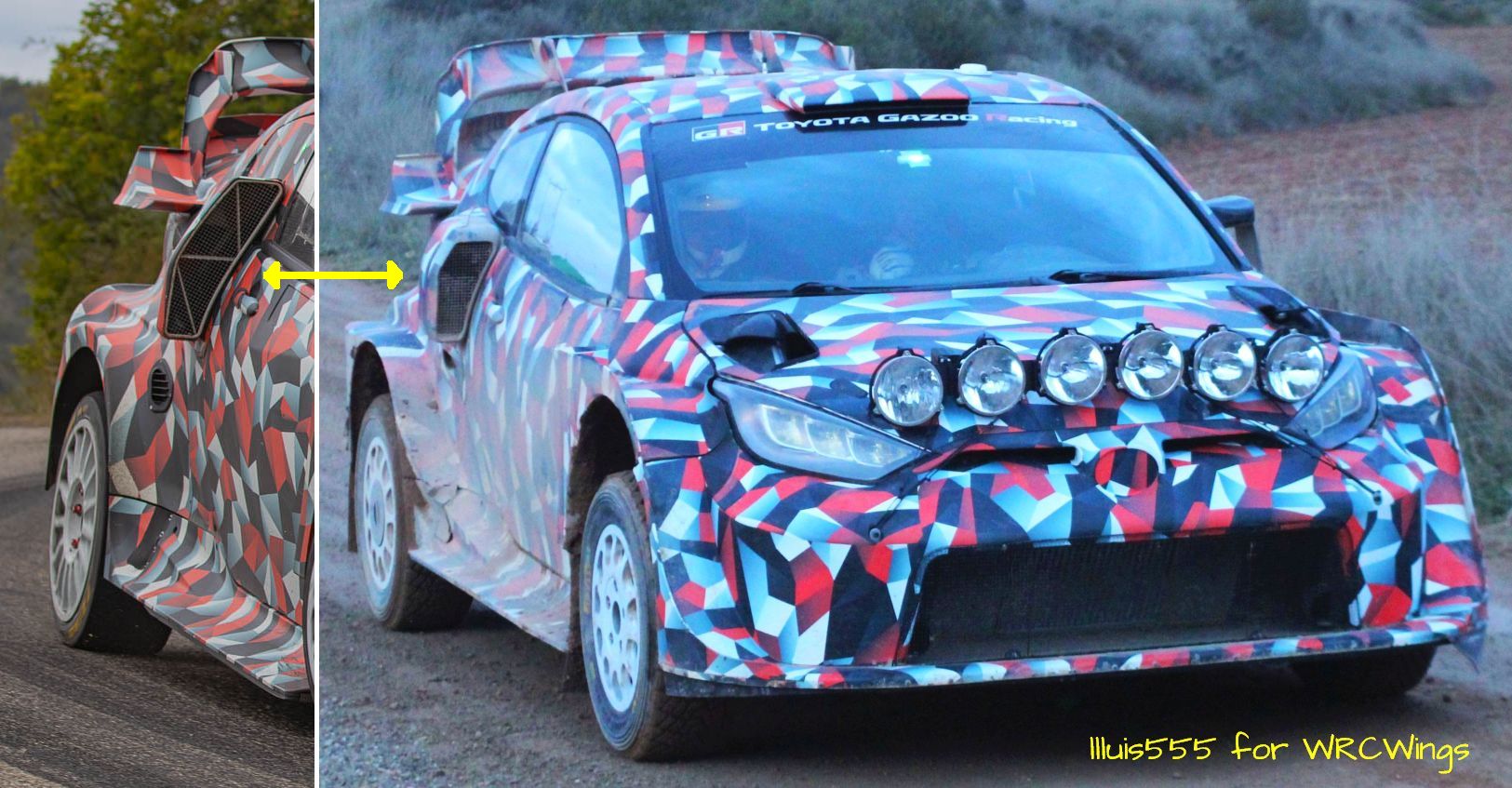 The reason behind the size reduction can be due to a smaller airflow required (less requirement than expected from the rear radiator) or to reduce the interference of the intake on the air flowing towards the rear wing. Both explanations are reasonable: the maximum typical temperatures in electric propulsion are typically around 60ºC, while normal operation temperature is 35ºC, that is, a cooling requirement considerably smaller than for an internal combustion engine (ICE). On the other hand, the upper part of the original air intake was located ahead of the side wing. Even though this is probably not the final wing design, it seems logical to eliminate any potential disturbance on the air flowing to the rear. 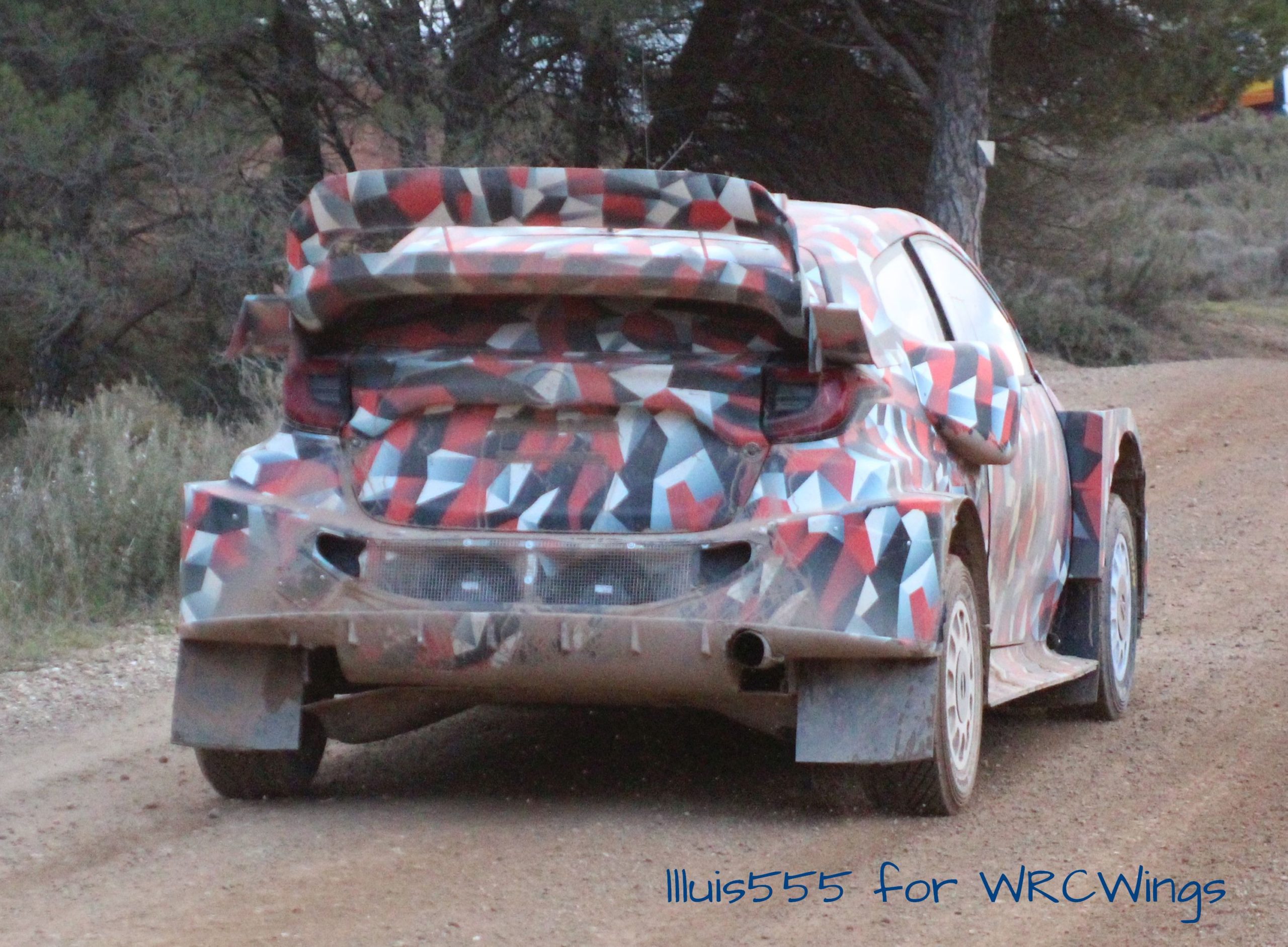 On the other side, the rear vent has been relocated to a more elevated location, and the new design of the vent allows to clearly see two fans (in opposition to one in the case of the Puma) to remove hot air exiting from the hybrid system radiator. 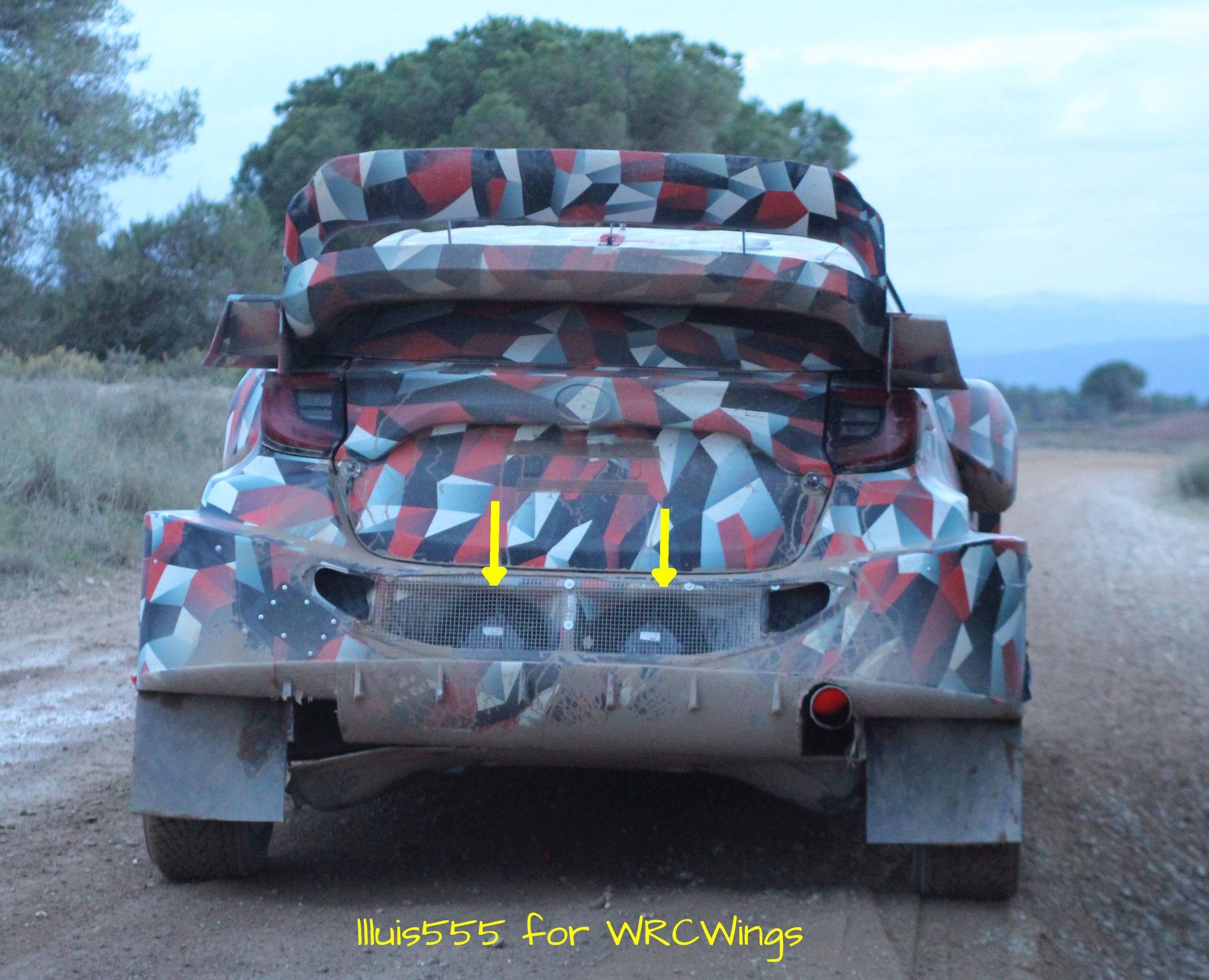 This design is significantly different from the previous design, where the vents were located at the bottom of the rear bumper, thus allowing to add energy to the air flowing under the car, to facilitate removing it. 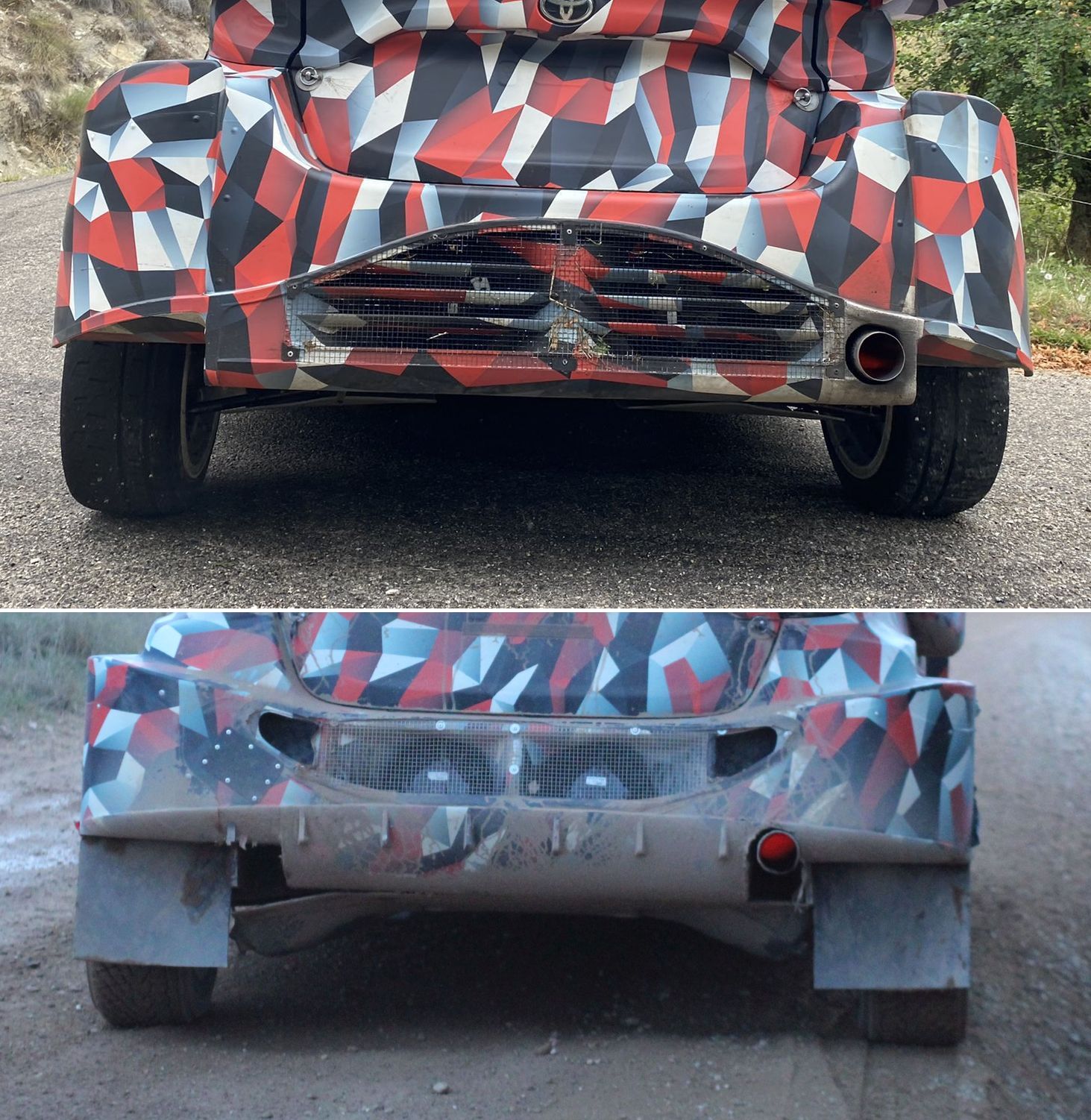 With the new design, the rear vent has been moved upwards, thus preventing it from adding energy to the air flowing from under the car (kind of exhaust blown effect). But it has now another purpose, as we will see later.

The second big modification in the car seen in the test is the redesign of the rear fenders. The wing shape on the top profile has been removed (as shown in the images below), making it less prominent, possibly to allow a cleaner flow under the rear wing, as well as reducing drag (due to the reduction of front area). 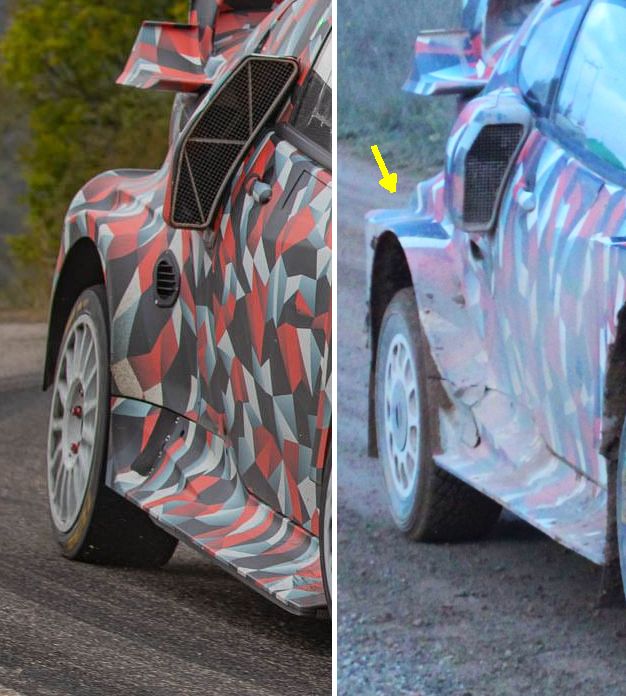 But the most significant modification in the rear fenders would be the introduction of a new orifice to act as a vent, by removing air from the wheel space, in substitution of the famous Yaris rear fender vents, now forbidden. For this purpose, there is an orifice in the inner of the wheel arch, connecting with the rear of the car, to allow air to be removed from this space (as shown by the yellow arrow in the image below). 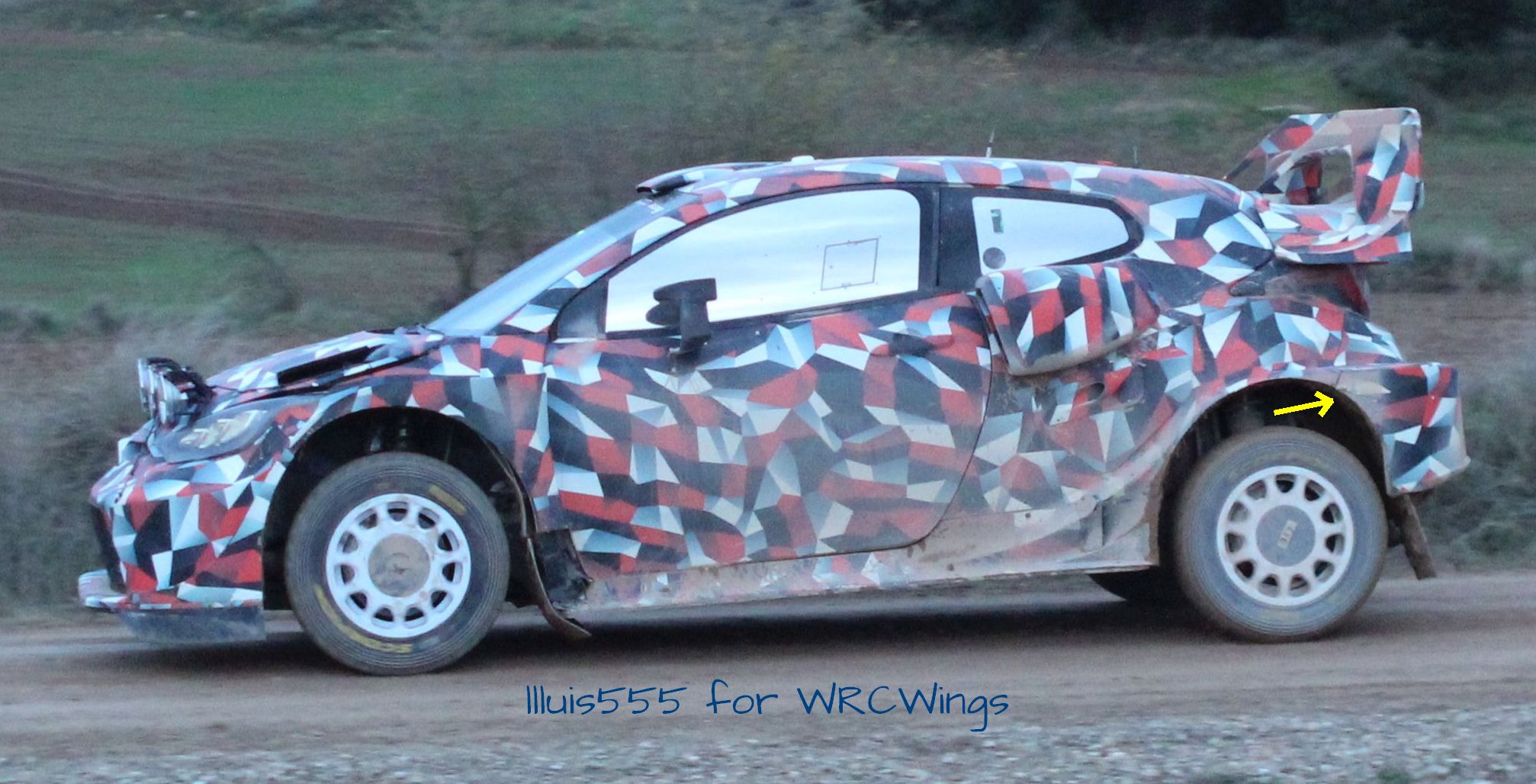 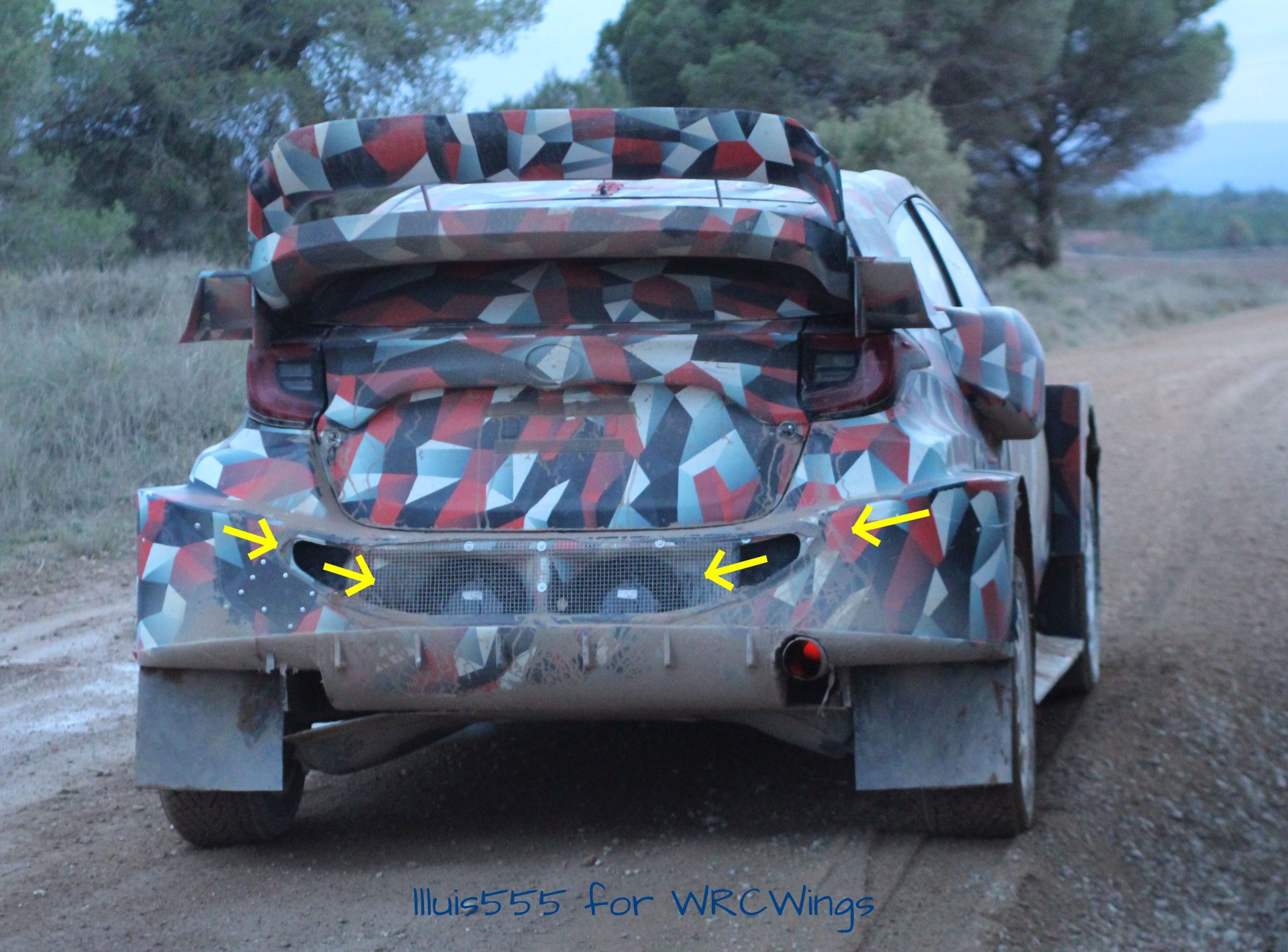 The air is conducted across the rear fender towards the rear orifice. The orientation of the pipe and vent forces air to the center of the car, where it interacts with the airflow coming from the fans. The result is that air is pushed by this stream to the car’s wake, and this effect travels upstream, increasing the efficiency in air removal from the wheel space. Air has to be removed from there or it will flow under the car, increasing the pressure and reducing downforce. With the removal of the rear diffuser and rear fender vents, any solution oriented to improve downforce in this area is more than welcome. 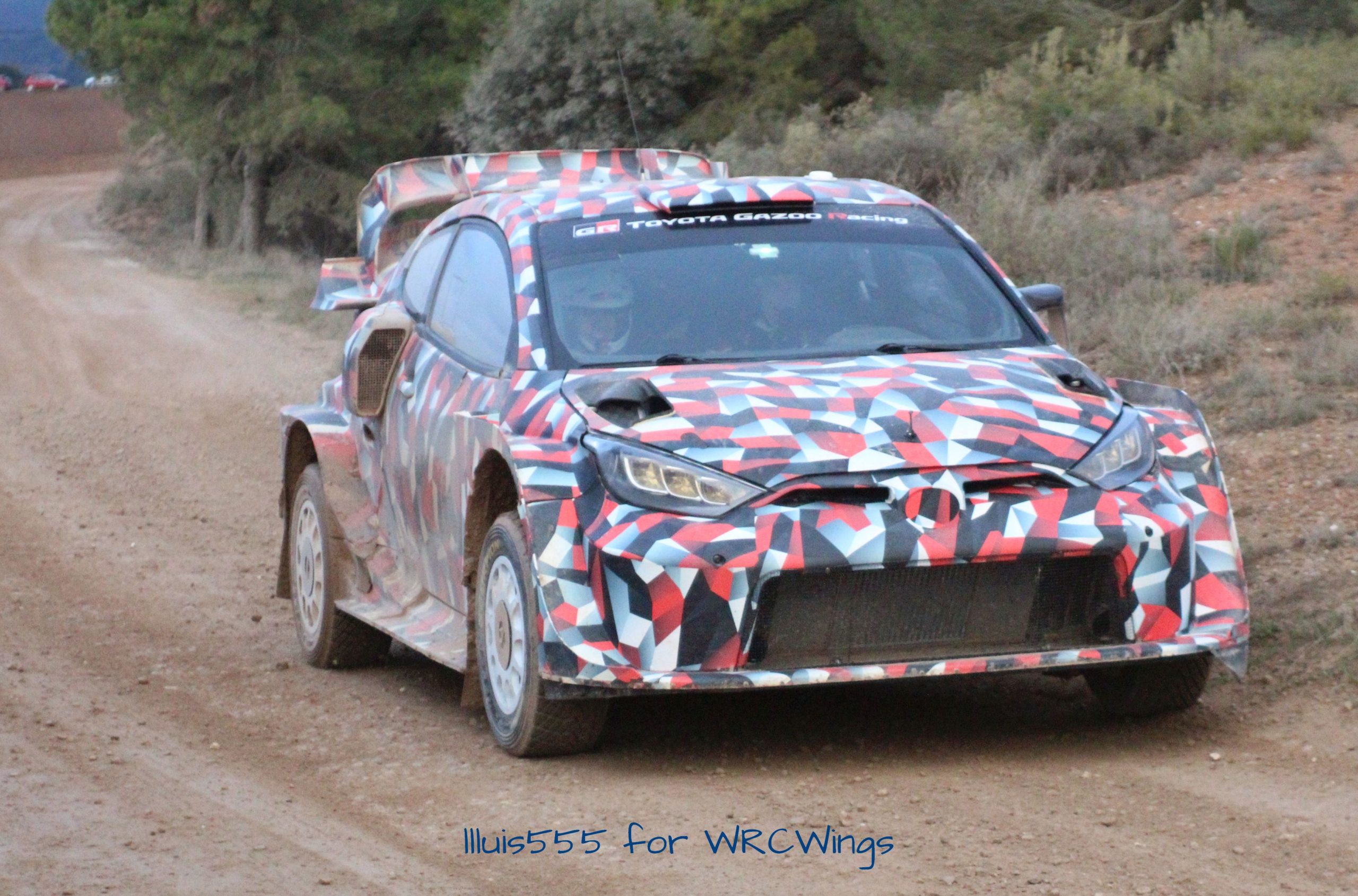 In summary, the new modifications seen in the test allow Toyota to increase rear downforce by removing air from under the car with the new rear fender design, while the potential exhaust blown effect generated by the hybrid system cooling is probably lost due to the relocation of the rear vent. Step by step, the new car is been defined, a process that should be completed in the next weeks.