The 2021 ACI Rally Monza will represent the last event for the most aerodynamic generation of WRC cars. It was almost five years ago, January 2017, when these cars first appeared in competition, and much has changed since then. During this period, the cars have been constantly upgraded, whether to increase front grip, to improve aerodynamic balance or to maximise the performance of specific aero parts, while at the same time, issues such as design flaws or particular problems have been resolved. This is our graphical review of the aerodynamic evolution of the 2017 WRC cars during this period, one of the most intense in history, for aerodynamics enthusiasts.

The images above show the many aerodynamic changes the cars have undergone over the last five years, as a result of the constant development carried out by the teams in all areas.

Most of the aerodynamic modifications concentrated on the front of the cars. The main reason was to generate more front downforce, to compensate for the excess rear downforce, which caused unbalance and understeer. Adding dive planes with lips and serrated edges, forcing airflow into the front fenders, reshaping the upper surface of the fenders like an inverted wing or installing winglets and deflectors on top of the fenders were some of the solutions the teams deployed to achieve the desired balance.

But some of the front-end modifications also served other purposes: protecting the sides of the car from air entrance from underneath the car or better channelling the airflow to the rear wing. Combined with additional solutions, such as redesigning the front wing vents and modifying the side mirrors, the result was an increase in downforce generation both under the car and at the rear, respectively. 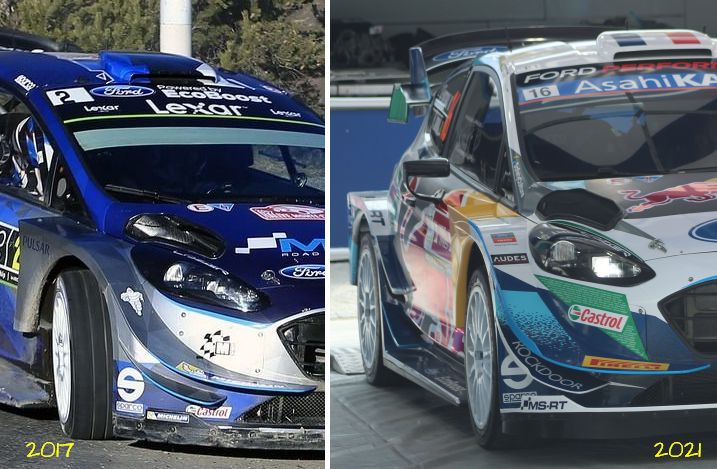 The rear wings were also modified by Toyota and Hyundai in order to achieve their optimum performance. The addition/extension of the side vertical strakes and the use of swan-neck supports also as strakes were the main modification, in order to generate downforce during cornering.

M-Sport and Hyundai redesigned the rear diffuser to make it more efficient. In both cases, the aim was to increase the air speed under the car (thus reducing pressure): MSport by increasing the angle of attack (thus increasing the exit section) and Hyundai by rounding the top edges of the diffuser. 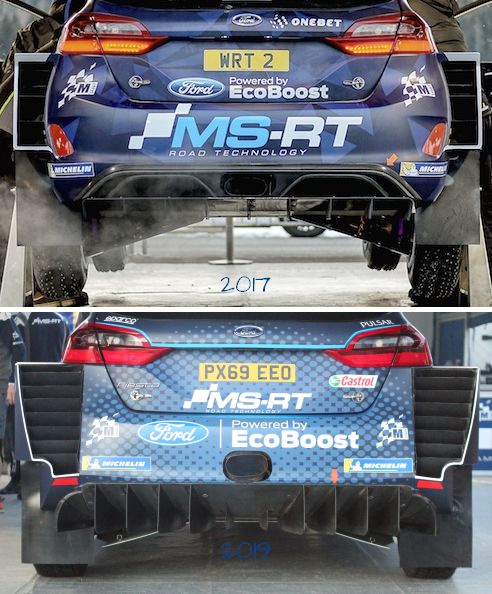 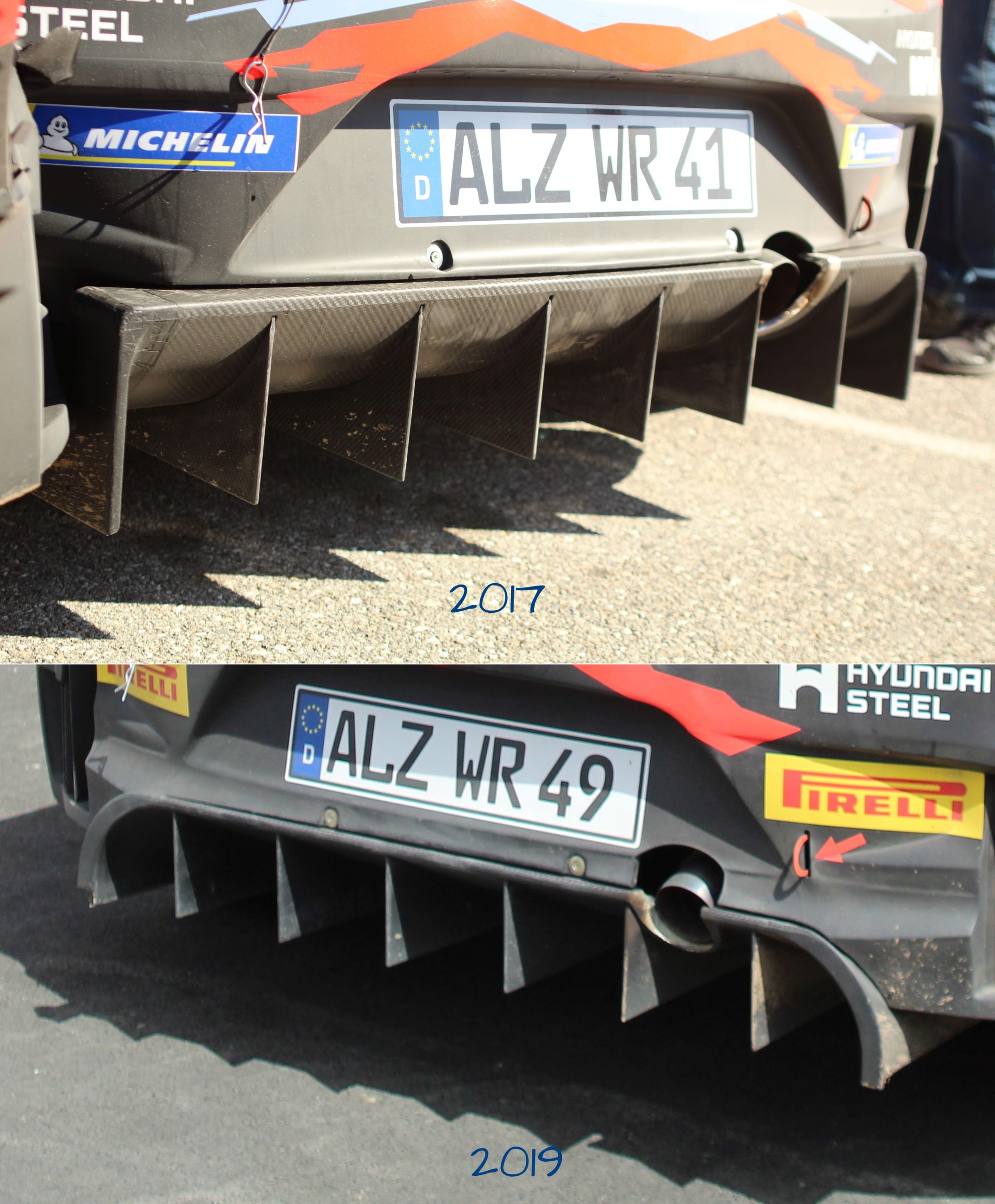 Another area of improvement to which all teams devoted many efforts was the rear fender vents. Their role in removing air from the rear wheel well and sending it to the wake of the car made them the subject of multiple variations. The aim was both to optimise air extraction (thus reducing the pressure under the car) and to use this airflow to reduce drag in the wake.

Other parts were also improved, such as the Hyundai’s roof scoop and rear fender front profile or the Fiesta’s side skirts. Also, cooling issues were object of multiple modifications at Toyota, both for the engine (new front air intake, new radiators and reviewed internal airflow) as well as for rear brake cooling (new air intake).

These are only some of the main visible modifications finally implemented in the cars. All of them were homologated by any of the types of homologation available. The table below shows the balance of homologations done by each team. Those related to aerodynamics were implemented as bodywork, for what they are distinguished from the total figures. 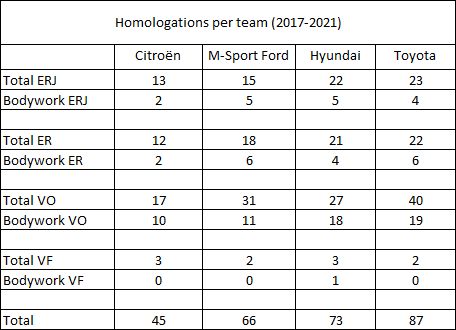 Homologations figures per team and type of homologation, where ERJ is Erratum Joker, ER is Erratum, VO is Variant Option and VF is Variant Supply. Data from 1/10/2021 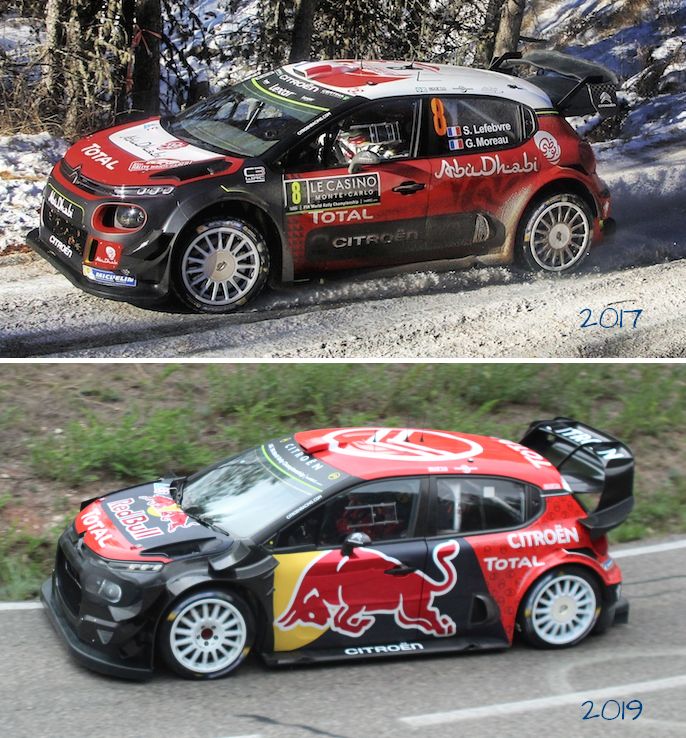 Many other modifications were designed, tested and evaluated, but never used. This is the case of Citroën with the C3 WRC, which tested multiple solutions but none was finally implemented. All in all, a great effort by all the teams and engineers involved over the last few years, and many lessons learned, which will surely be useful for the next generation of cars we are about to meet.

In short, an incredible period has come to an end, and a new and exciting era full of challenges is upon us, which we will follow as always, and we hope you will continue with us.