The new aero package of the third 2022 World Rally Championship contender was unveiled this week during Hyundai’s test in France, held in winter conditions. This is probably the (almost) final version of the car’s aerodynamics, so it deserves a detailed review.

The front bumper presents several modifications with respect to the original design seen in previous tests. The profile ahead of the front fenders (a in the image above) has been lowered, thus allowing to drive air from the front splitter towards the top of the front fenders, to generate more front grip. The lines of the profile are clean, with no side fence or external lip.

On both sides of the central air intake, small air intakes are now visible (b), presumably for the front brakes and transmission cooling. The upper intake on the bonnet remains in the new design, probably to feed air to the engine. Also, the two vents (d) on each side of the bonnet, already seen in the previous car, remain untouched. 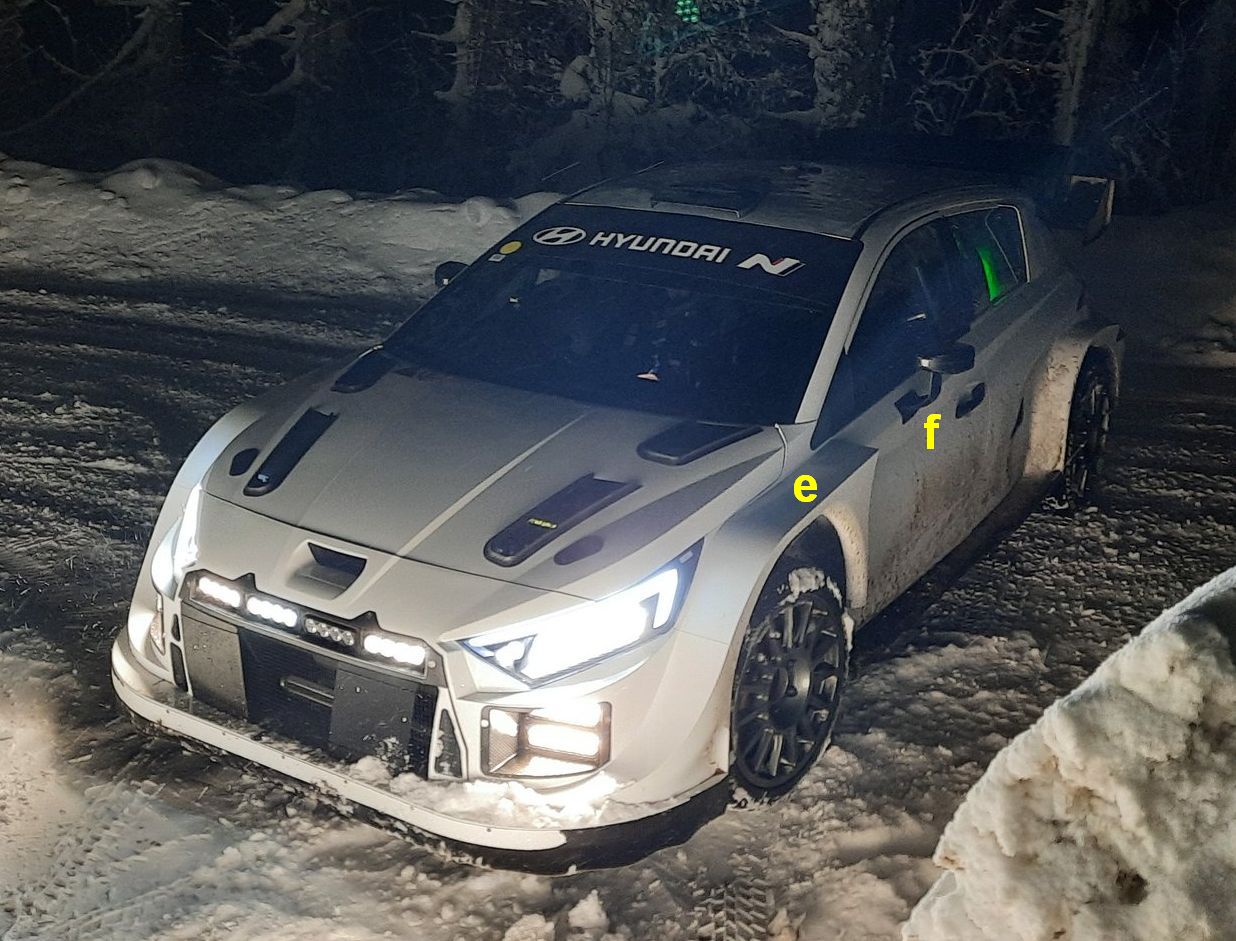 The late runs showed another important novelty at the front of the i20 N Rallly1: the integration of the light pods inside the body of the car. The result is a significant reduction in drag, as well as an improvement in downforce, as the air flowing over the bonnet does not find now the disturbance (such as that caused by the old light pods) and can flow attached to the body, thus improving rear wing efficiency.

The design of the top of the front fenders has also been modified, and now it is a completely flat surface (e), while in the previous design it was inclined towards the inside. Also, the side mirror support (f) design is new. The goal of these modifications would be to drive a clean airflow towards the rear of the car (see also the image below), thus feeding the side air intake for the hybrid system cooling (for a more effective cooling) and the side winglet of the new rear wing (for a higher rear downforce generation). 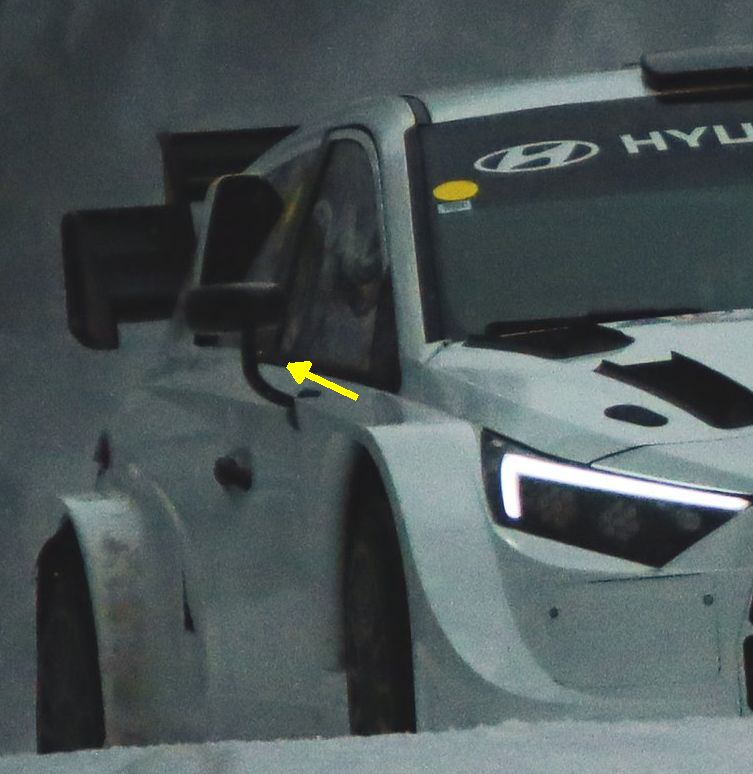 In opposition to the other Rally1 cars, the side skirts of the Hyundai remain flat, such as in the i20 Coupé WRC, although with a very small angle upwards at the rear end (g), connecting with the front profile of the rear fender (h), that has also been modified: it is thinner and rounded at the front and half of the rear end. 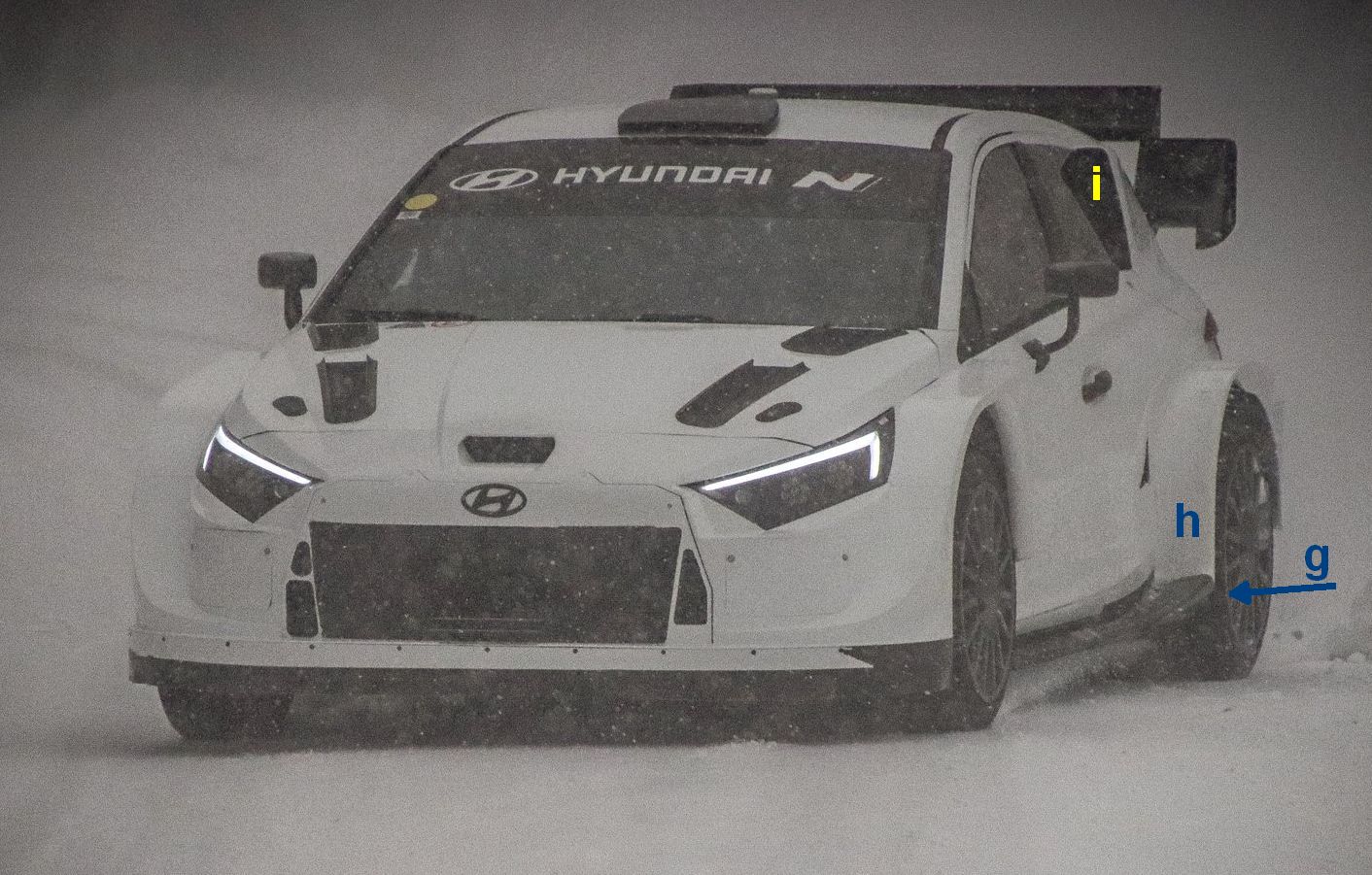 The shape of the side upper air intake (i) has also been modified, as the opening is wider on top, in order to get a bigger amount of airflow free from the side mirror disturbance, that is, pressure drop that would reduce the cooling capacity.

A new air intake (j) has been incorporated, at the center of the rear panel and with the shape of a NACA duct. Similar to the i20 Coupé WRC, most probably it feeds air to the rear brakes for cooling purposes, although it might also be possible that it is used as an additional air supply for the hybrid system cooling.

The side of the wheel arches has been totally (front) and partially (rear) trimmed (k). The origin of this modification is surely the removal of the fender vents. In order to remove air from the wheel spaces, an alternative was needed, and this is the solution all teams have found, combined with a higher space between the wheel and the arch, to offer air an exit toward the exterior of the car, instead of flowing under the car. The only difference, in the case of the i20 N is that the rear arch has only been trimmed partially. 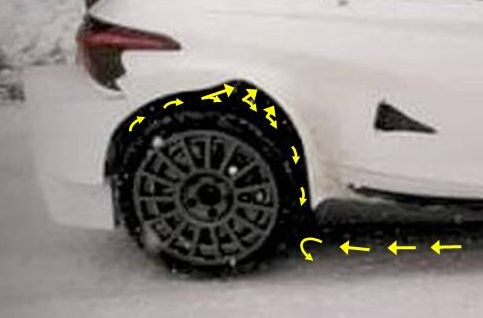 A possible mechanism for air removal would be as shown in the image above: air is dragged by the rotating wheel, till it reaches the open space and is allowed to escape from the rear wheel space. The result is a decrease in pressure under the car, thus allowing higher downforce generation.

The rear bumper (l) has been extended to the rear, possibly to allow the use of a bigger rear wing (m). The new wing includes two planes defined with straight lines. The similarity in shape with the rear wings of the Puma and the Yaris may suggest that the wing’s shape has been set by the new regulations. Otherwise, it would be difficult to reach such an agreement between the three manufacturers on the very first design. 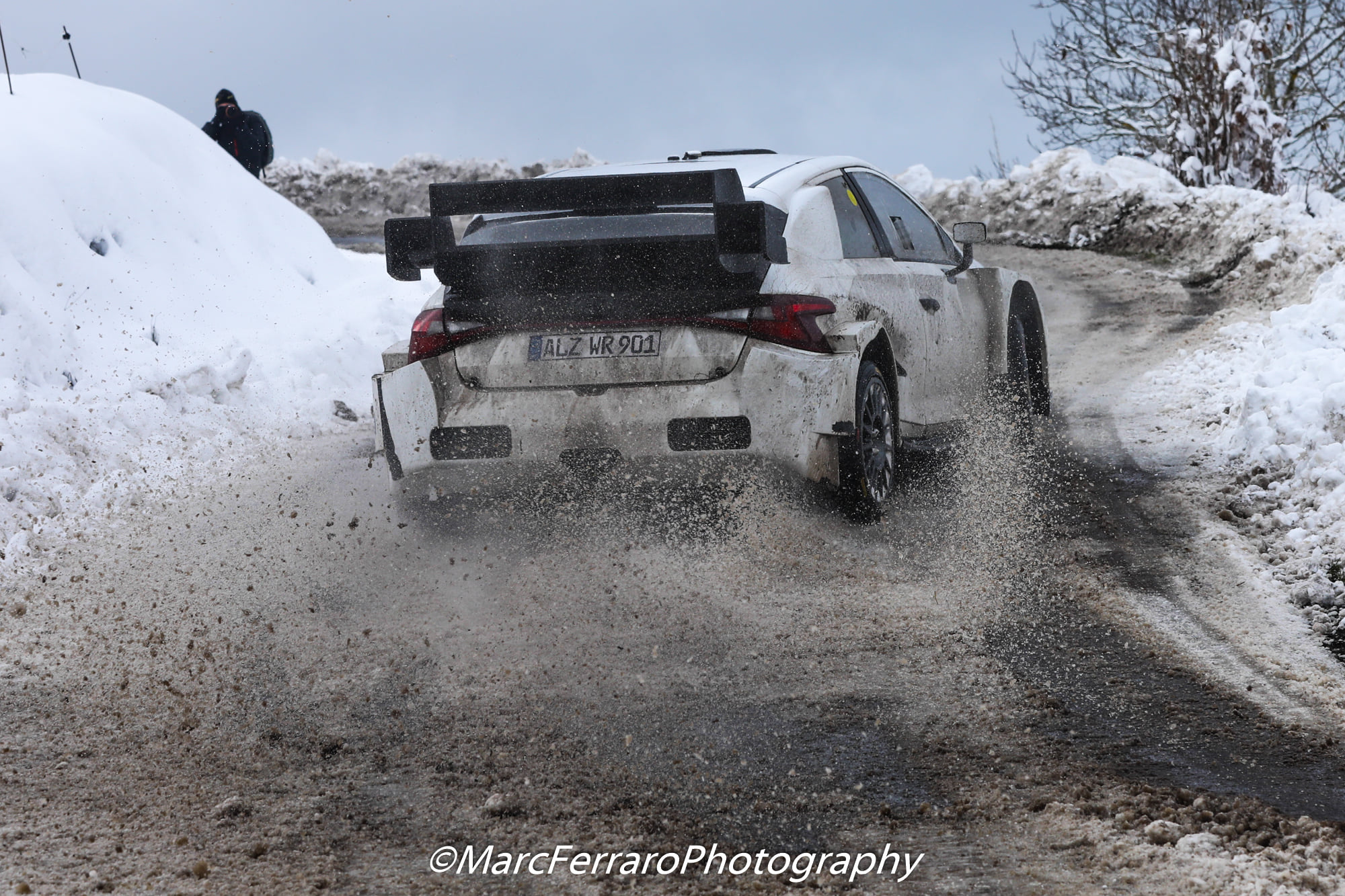 As in the other cars, the new wing includes two big side winglets (n) to take advantage of the side airflow, to generate more downforce. The Hyundai’s winglets also incorporate endplates (o), but smaller than in the Puma and the Yaris. The wing is supported over the rear window, while it does not include any vertical fin. 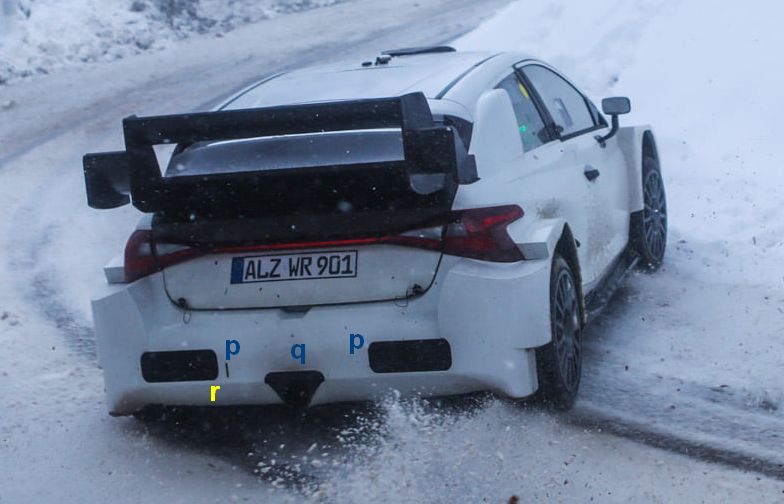 The hybrid system cooling vents (p) are located on the rear bumper, at both sides of the central exhaust gas pipe exit (q), although at a raised position with respect to the previous design of the car. The combination of the three exits allows generating a flow of air/gas across the width of the rear bumper, which contributes to more effective removal of air under the car (kind of exhaust blown diffuser concept), as shown in the image below (where snow is removed from under the car). The air flowing under the car is accelerated by the air exiting from the vents and the exhaust gas. The result is a faster flow under the car, that is, lower pressure and higher downforce generation, partially compensating the absence of the rear diffuser forbidden by regulation. Even so, the underside of the rear bumper lower part (r) has been designed with the shape of a diffuser, with both ends close to the road, while the center is set at a more elevated position, to facilitate better air removal.

In summary, multiple and really interesting aero novelties in the last version of the Hyundai i20 N Rally1, which might still be fine-tuned during the testing period that started this week and that will be extended in the next weeks.