The 2022 season is about to start, with the additional incentive of a full new generation of cars derived from new regulation. The new cars have been constantly developed and tested during the last months, and we have been tracking all the new aero developments as soon as they were tested. Now that the designs of the cars are almost definitive (there’s always room for improvement, as this week’s tests prove again), it’s time for a comparison of the different aero solutions proposed by each team.

One of the main visible changes in the new cars is at the front of the car: the new regulation bans the presence of dive planes and winglets, thus the new fenders (and the cars) look probably simpler. But even so the front fenders can be used to generate some downforce, while directing airflow towards the rear of the car to improve aerodynamic performance. Hyundai and Toyota have included wider flat-front surfaces at the front of the fenders, designed to capture some pressure from the main airflow to generate some load on the front wheels. On the other side, the Ford Puma Rally1 presents a different design, that includes fences (a in te image below) on both sides of the front splitter. The fences direct air towards the fender, while in the case of the Hyundai and the Toyota, air may escape to the sides of the car, due to the absence of fences or endplates.

However, during the Rally Monte-Carlo pre-event tests held this week, a new design of the Ford Puma front fender has been seen. The new design is very similar to that of the Hyundai and the Toyota, that is, without the side fences.

The top surface of the fender is flat in the i20 N and the GR Yaris, in order to facilitate airflow to reach the side air intakes and the rear wing. On the contrary, the Puma includes an inverted wing shape (same as in the last version of the Fiesta WRC) on top of the front fenders, to generate some additional downforce over the front wheels. It also includes a side lip (b), a kind of small endplate designed to prevent air from mixing with the main flow, while sending it in parallel to the car, towards the side air intake and rear wing.

The location of the side air intakes for cooling the hybrid unit is different in each car. In the Puma it is positioned in line with the top surface of the front fender, thus avoiding any interference with the rear wing. In the case of the Hyundai, the intake has been located in the rear window, thus partially reducing the efficiency of the rear wing, as part of the airflow enters into the cooling system, instead of impacting over the rear wing side winglet. An intermediate option can be found in the Toyota, where the intake is located below the rear window, causing a minor interference with the rear wing. But it is also the most prominent intake, having as bigger impact on drag due to the highest front area.

The view from the side also shows some differences: while Toyota and Hyundai have included a small air intake ahead of the rear wheels, very probably for rear brake cooling, the Puma seems to include a double air intake, thus feeding fresh air for the hybrid unit (c) and rear brakes (d) cooling. 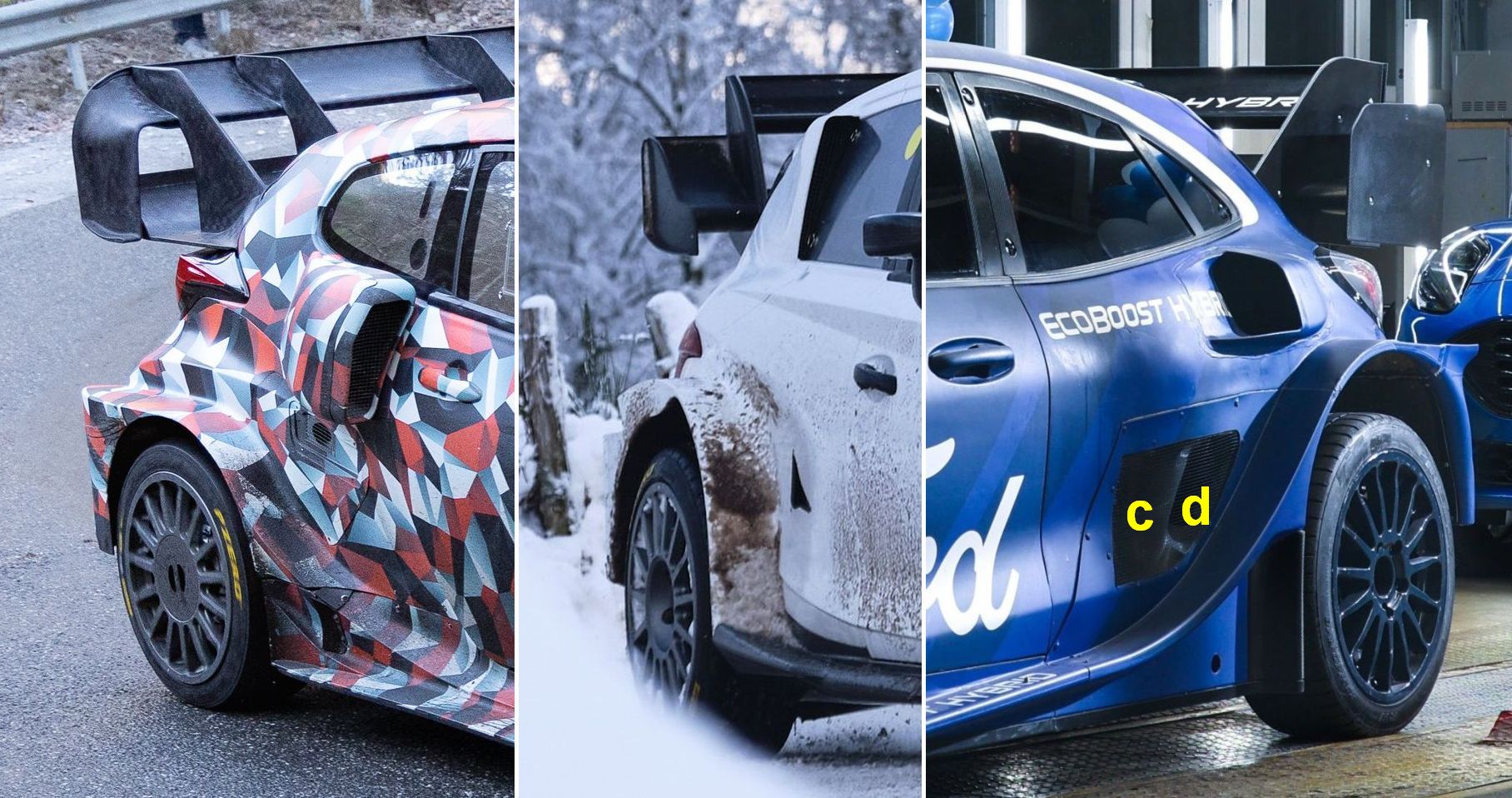 The presence of side skirts (also known as door sills) is again crucial to prevent air flowing alongside the car from entering under it, which would cause an increase in pressure and, in consequence, a reduction in downforce generation under the car. And again we can find significant differences in the design of the side skirts in the three cars. The Hyundai’s design is the most classic one, with flat skirts and only a small elevation at the rear part (e), while the rear fender is round.

In the case of the Toyota, the skirt is divided into two parts: the external (f), flat, and the internal (g), with an increasing slope that connects it to the rear fender. This internal part would be designed to generate some downforce over the rear wheels, following the design of the Fiesta WRC.

But the most radical design can be found in the Puma, where the side skirts are not flat and connect to the rear fender. The result is probably very effective, in terms of downforce generation over the rear wheels. But at the same time, the skirt is not fully working as a barrier, especially at the rear, allowing air to enter under the car ahead of the rear wheels (h), what can generate an undesired pressure increase.

Most probably to extend the barrier effect till the end of the car, MSport has introduced modifications in the skirts seen today in the Rally Monte-Carlo pre-event tests (as shown in the image below). We will have to wait until next week to confirm if these modifications are finally implemented in the car to be aligned in Monte-Carlo. 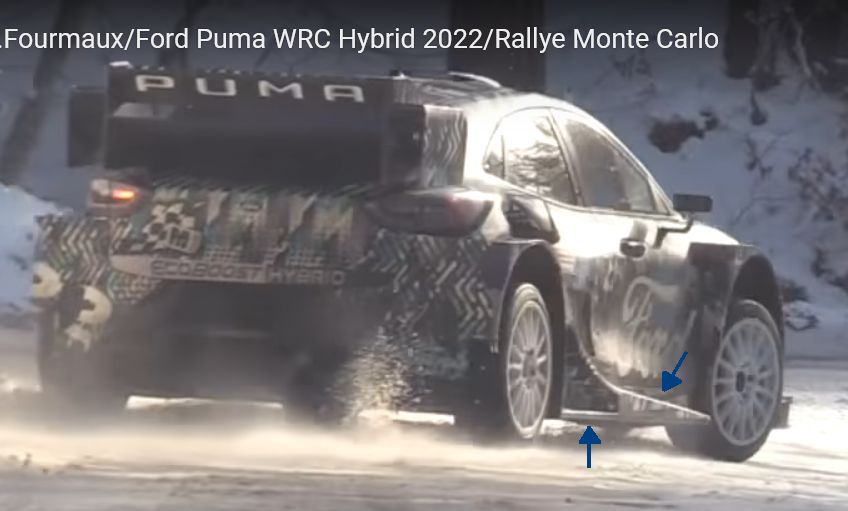 In addition, the front part of the skirt is now compact, filled with material till the end of the front door, possibly to prevent mud and snow from accumulating there, which would cause undesired weight increase.

The absence of the rear diffuser (also banned by regulation) has brought some alternatives to still gain some downforce under the car. One of the most logical is the change in the elevation of the undercar (rake), limited to 8º by regulation. The result is that less air enters under the car at the front, and the increasing area allows air to speed up, thus reducing the pressure under the car (more downforce is generated), as we developed in a previous article.

Toyota is the most radical in terms of rake, while still some small rake can be seen in the Hyundai. The Puma, on the contrary, seems to have zero rake in the original design of the car (or this is what the available images seem to indicate). Fortunately for the teams, the rake can be modified (through suspension/ride height adjustment) without any homologation (joker) required, so we can still see changes during the season on this aspect. 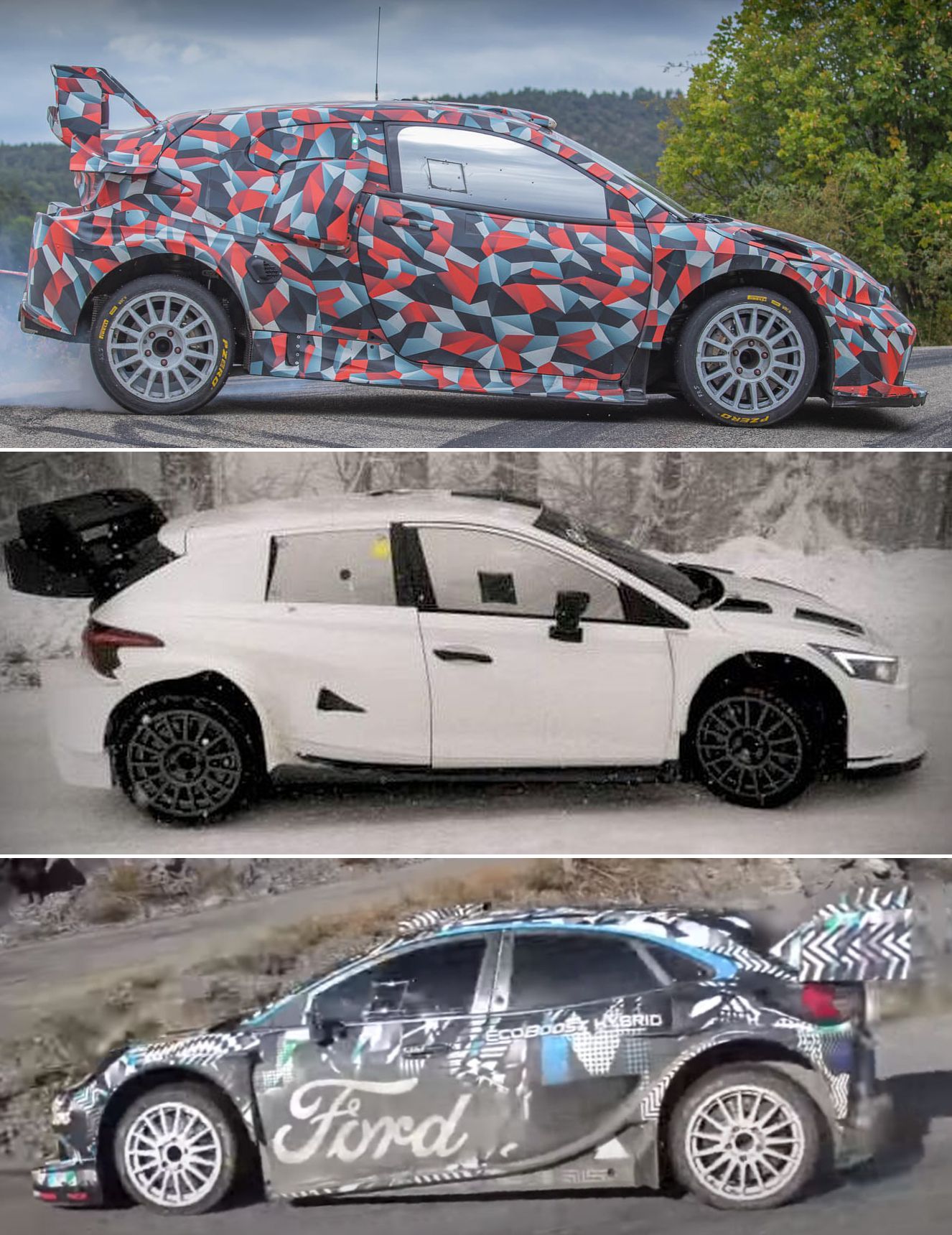 The removal of hot air from the hybrid unit refrigeration is also different in the three cars. While MSport and Toyota have included a direct vent at the rear of the car, showing the fans located after the radiators, in the case of the Hyundai, the only visible parts are the exit of the pipes connected to the fan(s). The reason is clear: Hyundai has redirected the air vents to both sides of the rear bumper while including the exhaust gas pipe exit at the center. The result is a clever distribution of air and gases exiting from the rear of the car, with the object of helping air flowing under the car to be dragged by these streams, thus resulting in higher speed (lower pressure) under the car. It is another wise alternative to the absence of rear diffuser. You can find a more detailed explanation here.

On the contrary, Toyota and MSport have located the vents on the center of the bumper, while the exhaust gas pipe is located on one side. It is just the opposite situation that in the previous WRC car generation, as both the Fiesta WRC and the Yaris WRC had the exhaust gas pipe at the center (to take advantage of the exhaust blown diffuser effect) while Hyundai kept it on one side. Also,the location of the air vents on the Puma and GR Yaris (higher in relation to the lower end of the bumper) reduces their potential ability to contribute to the blown diffuser effect.

Another important difference can be found in the Toyota: the holes (i) on both sides of the rear (central) vents are connected to the space of the rear wheels, to help remove air from these spaces. The result is that less air accumulates under the car, which means lower pressure, that is, higher downforce. No evidence of a similar solution has been observed in either the Puma or the i20 N.

One of the aero elements less affected by the new regulations was the rear wing, as possibly only small changes to maximum dimensions were proposed. There was some expectation to see how different the new wings would be from previous cars. And the final designs show that two teams (Hyundai and MSport) have opted for a very similar wing design, while Toyota (as it happened in 2017) has gone differently. The rear wing of the i20 N and the Puma consist of a central wing with straight lines, a lower plate (supporting the whole element), vertical endplates and small wings on both sides of the central body. The main difference between these two designs would be the different sizes of the side wing’s endplates: square for the Puma (j) and wing-shaped (k) in the i20 N.

The rear wing of the GR Yaris also maintains straight lines on the central wing, but with no side wings. On the contrary, the central wing is extended to the maximum width allowed, then connected with descending endplates on both sides. The wing is supported by four swan-neck supports (l), acting at the same time as vertical fins (m) over the upper wing. These elements allow to take advantage of air pressure while cornering to generate some additional downforce, even at the cost of some drag (caused by the fins). Another distinct feature of the GR Yaris rear wing is the separation between the lower plate and the endplates.

In summary, we can find significant differences (and similarities) in all the most important aero elements of the three 2022 Rally1 cars, showing that teams have been working in different directions. Only the results will confirm who did it better and where future improvements will be applied, in what we are sure will be another amazing season.

We want to thank to all those photographers who gently allowed us to use their pictures, taken during the development tests held during the last months of 2021: Julien Pixelrallye, Frédéric Mangenat, Marco Ferraro, Henri Louis, Louka Sorriani and FullAttackrallye in this article, as well as many other who collaborated in the different articles we have published about the 2022 cars, that you can find in our website.