The recent Rallye Monte-Carlo represented the debut of the new generation of Rally1 cars, a generation that will shape the WRC for the next three years. The external aero configuration of the cars was mostly known before the event, thanks to the excellent images reported from the pre-season development tests, as well as by the latest novelties, some of them first seen in the season presentation held in Salzburg. But Monte-Carlo represented the first opportunity to look deep inside the cars, to know the different solutions engineers designed, with special attention to the hybrid unit cooling system layout. While the hybrid unit is located at the same position in all three cars, the disposition of the cooling system follows different philosophies, with different impacts over the car behaviour that are worth reviewing. 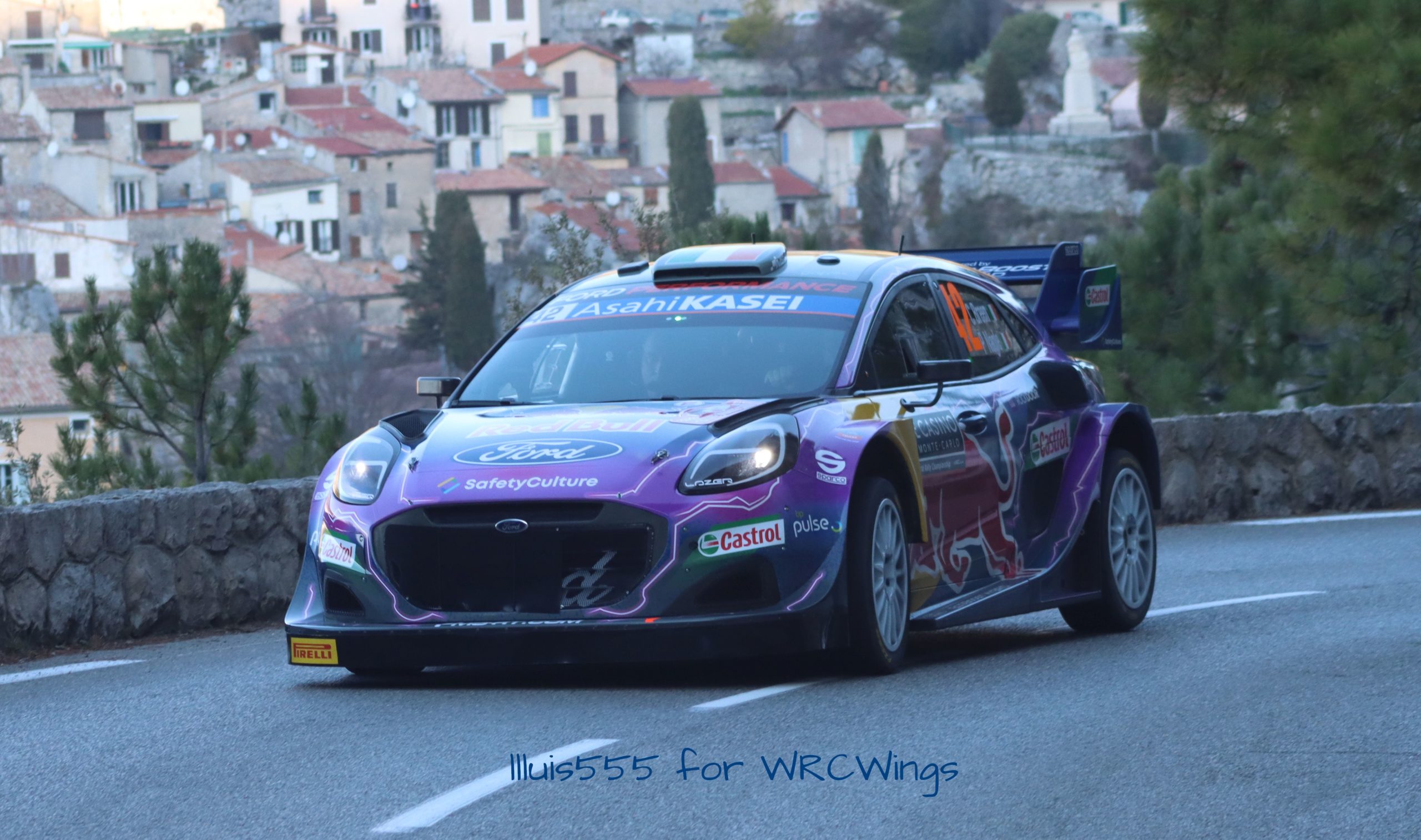 The basic idea is simple: to send fresh air towards the radiators to cool down the coolant used for batteries and electric engine and then to remove the hot air to the rear of the car while trying to take advantage of it. But the approach taken for each team presents significant differences, with different impacts on the car weight distribution, the cooling capacity or the use made of the removed air stream, in replacement of the banned rear diffusers.

The simplest solution can be found in the Ford Puma Rally1 car, as shown in the image below. 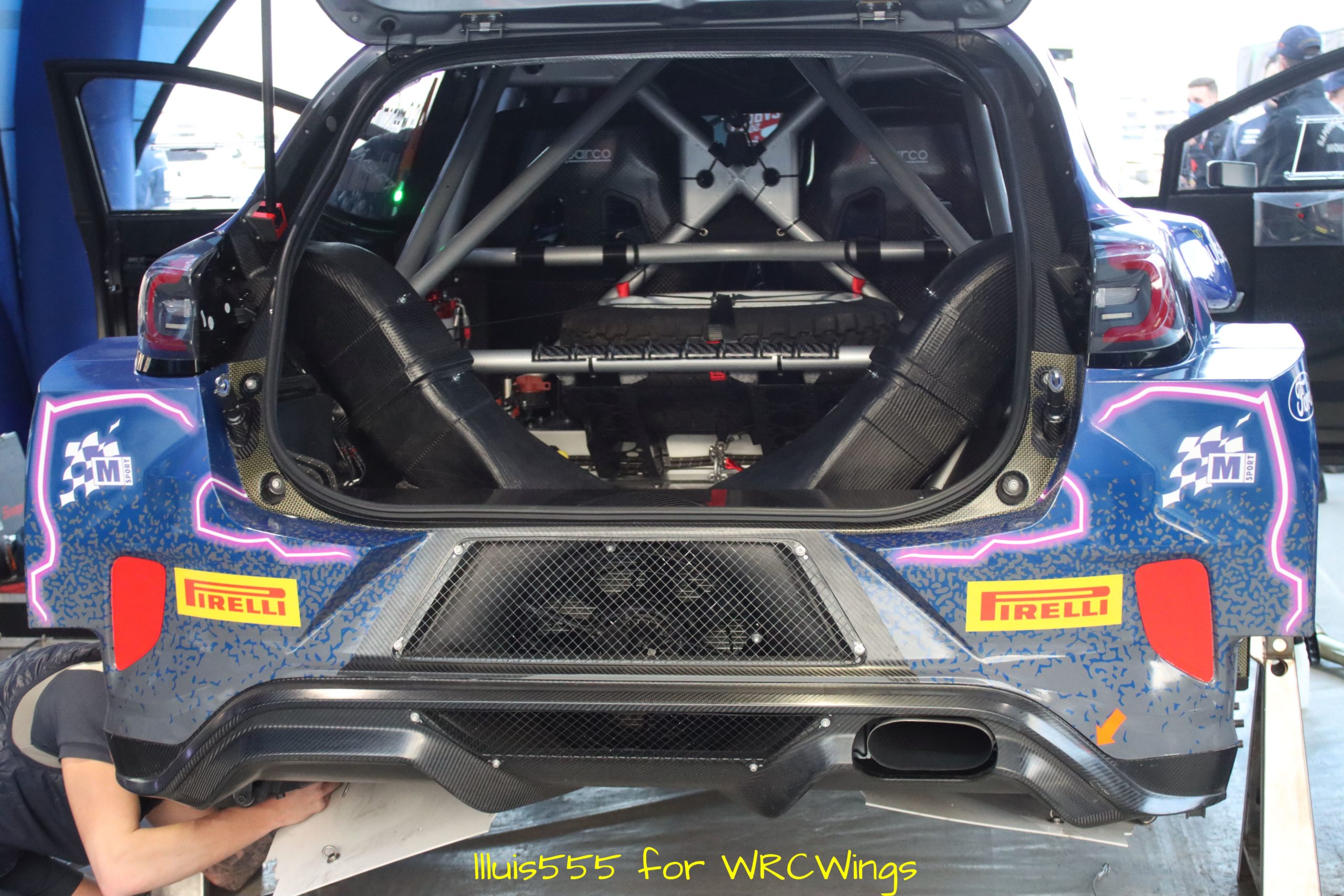 The image shows the cooling pipes addressing fresh air captured by the side intakes towards the radiator. This is located at the center of the rear of the car, behind the fan, in a vertical disposition, as can be seen in the images. 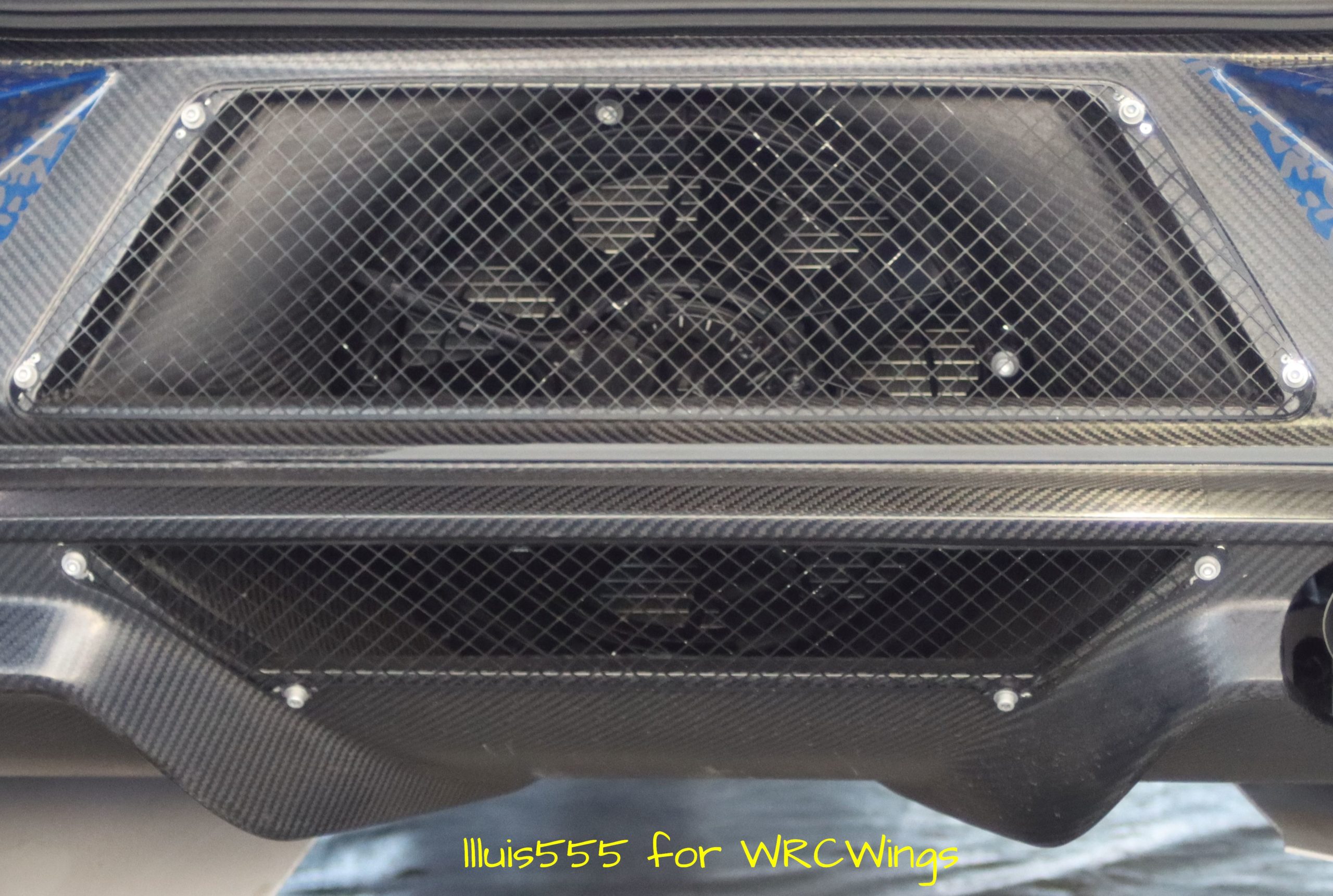 Fresh air entering through the side intakes is conducted by almost straight pipes to the radiator. Due to the straight pipes, the air pressure drop is very small, which means that its cooling capacity remains almost intact. At the radiator outlet, air is drawn in by the fan to be expelled through the upper (free) opening and a lower opening, with an internal duct that directs the air upwards. 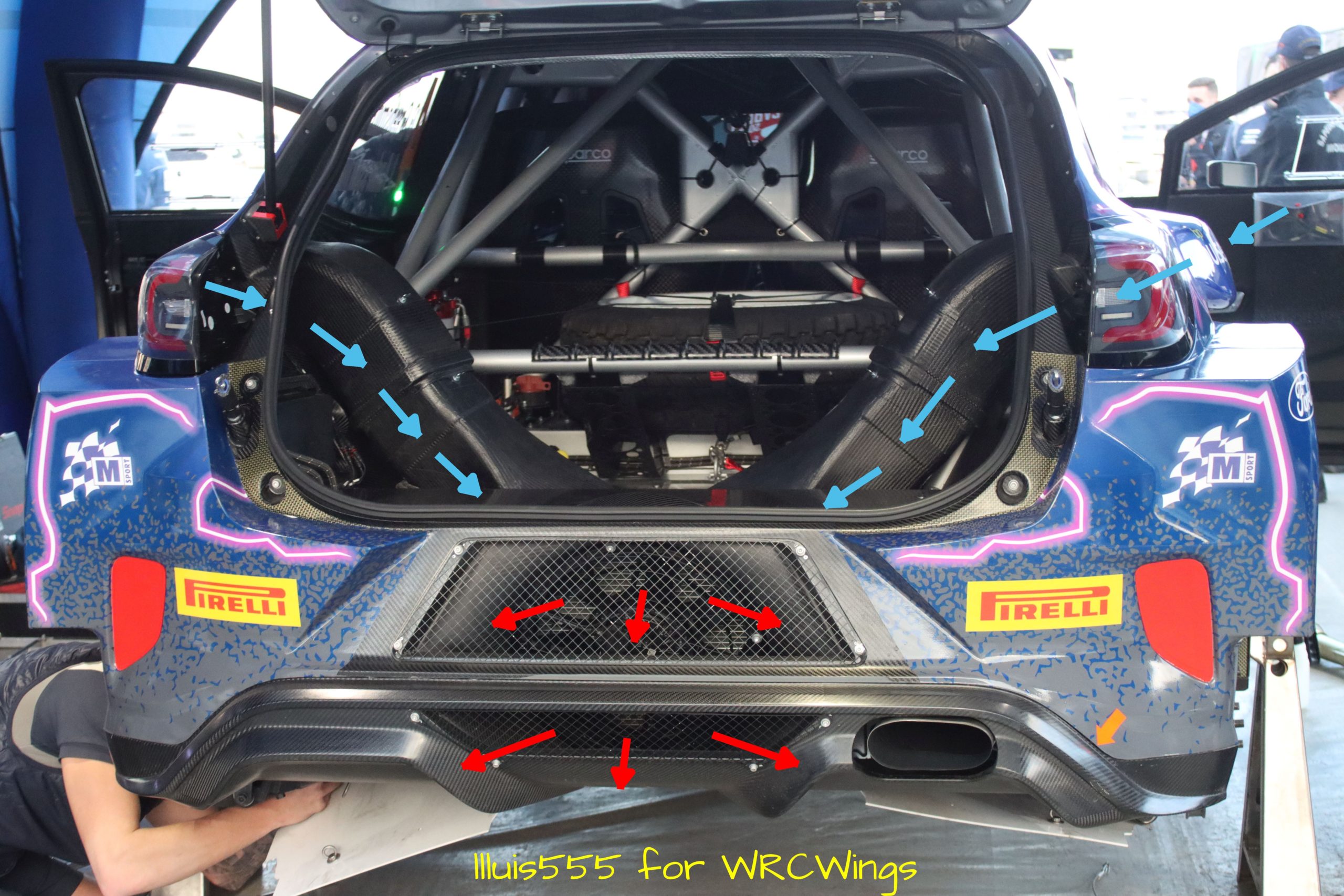 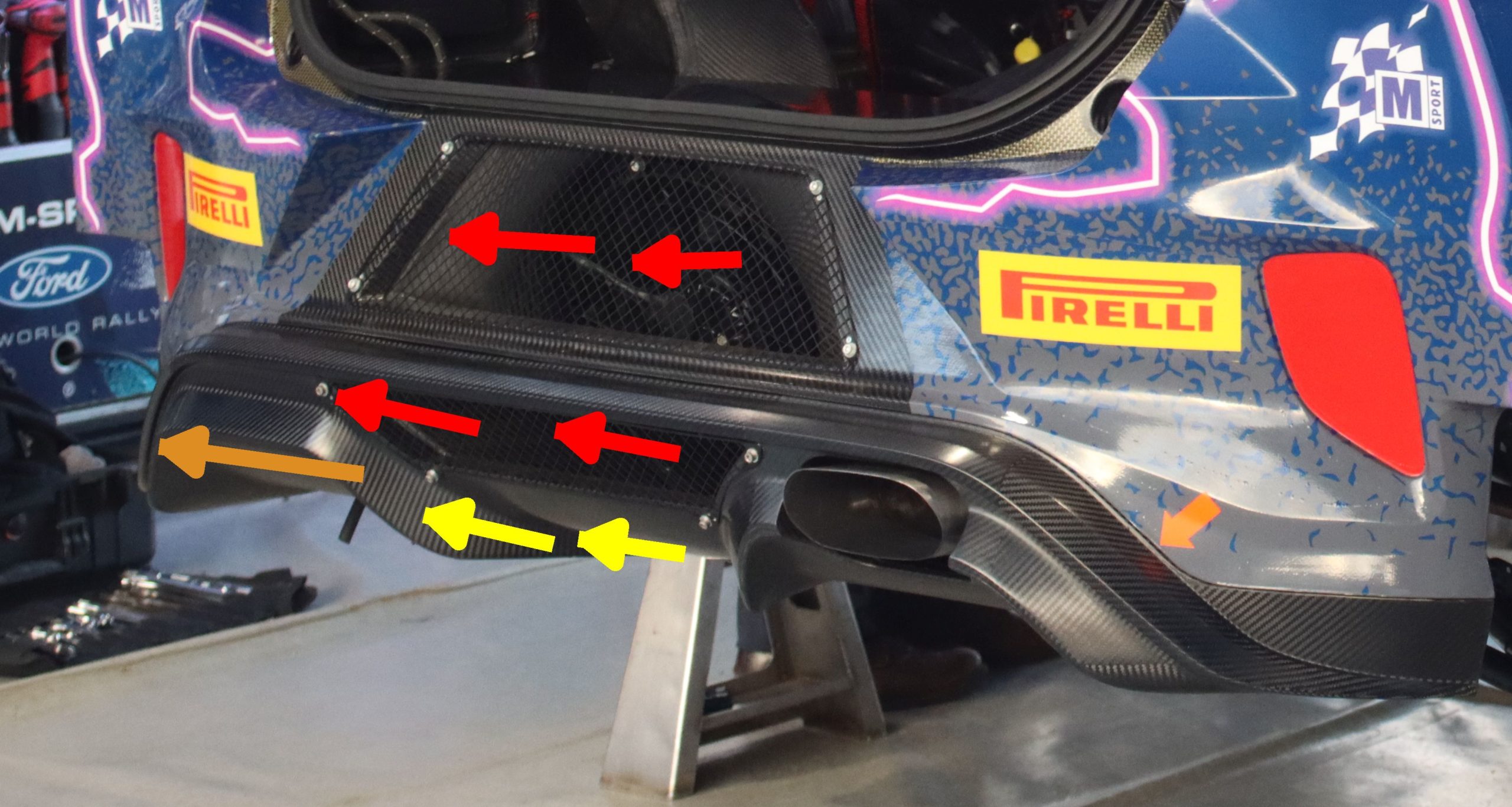 A similar effect is obtained with the exhaust gases, but only on one side of the rear of the car, leading to an asymmetrical velocity profile under the car. 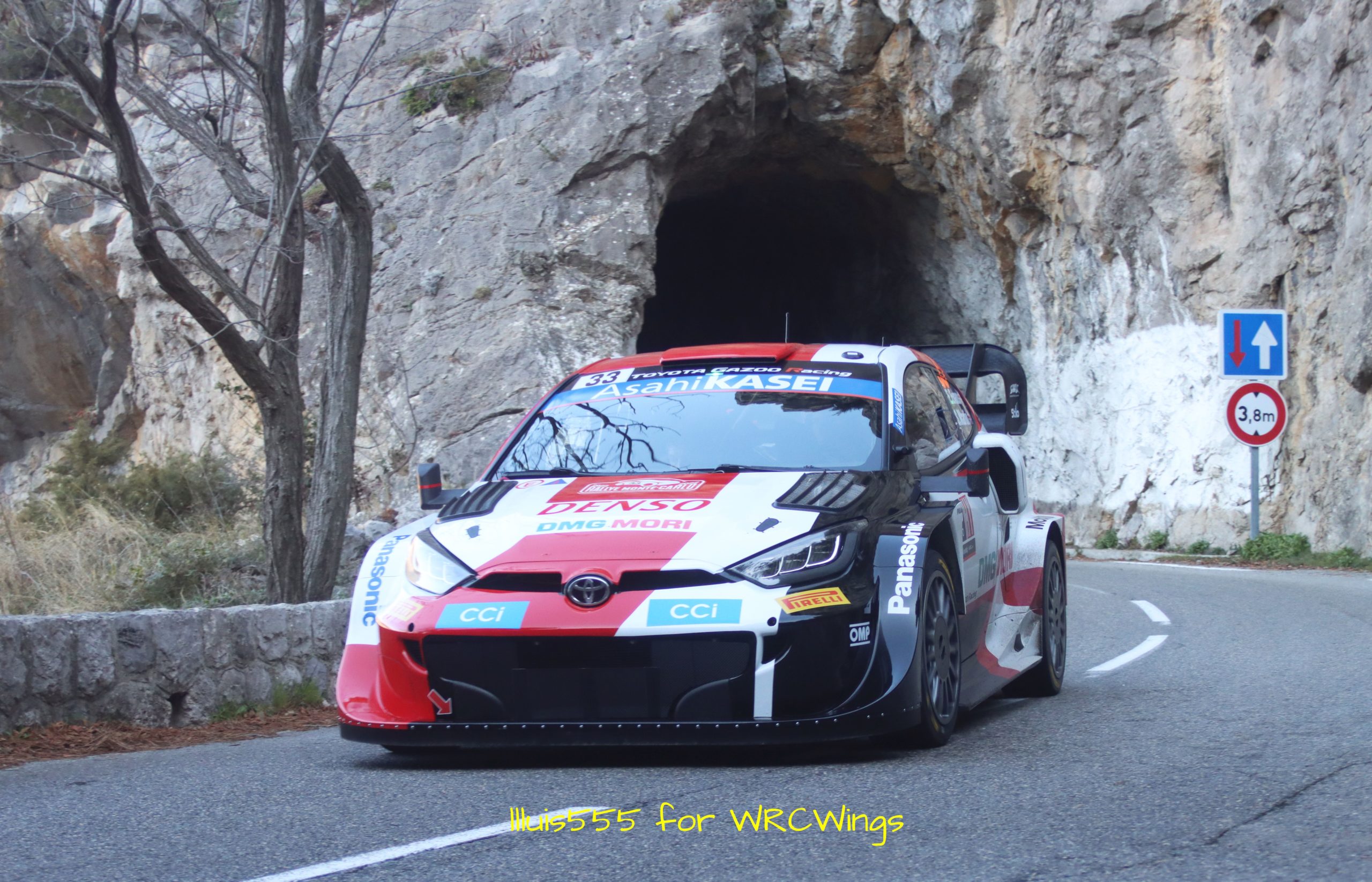 The Toyota GR Yaris Rally1 incorporates a similar solution. The pipes inside the car look also straight, although the upper end is located higher than the side intake, which might cause some air pressure drop. But the main difference with respect to the Puma is in the use of two fans, that send hot air directly to the rear of the car, without any restriction or conduction (pipe). 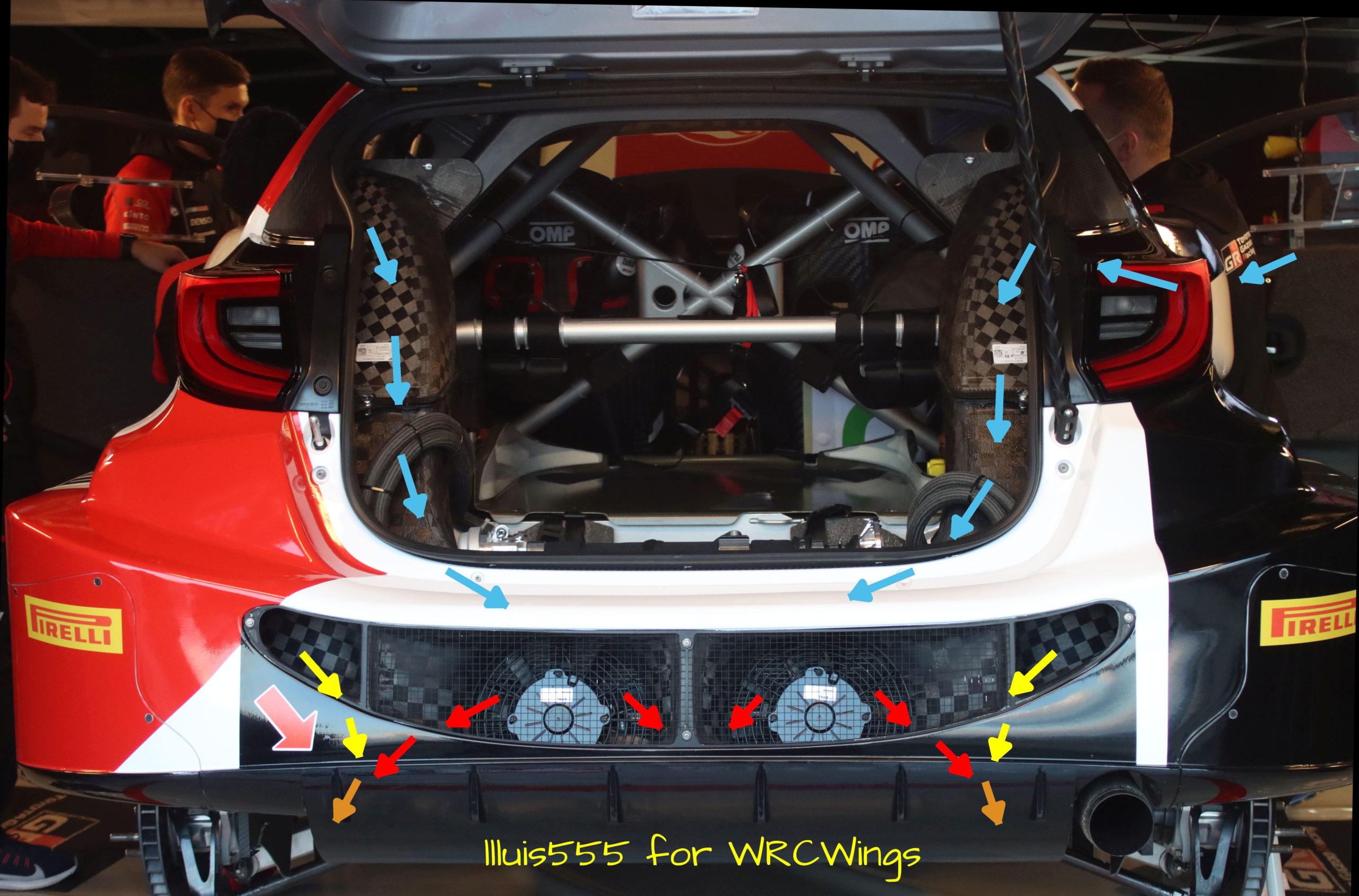 Hot air expelled by the fans (in red in the image above) is used to drag the air coming from the rear wheels through the side conducts (in yellow), thus contributing to removing more air, which means reducing pressure in the rear wheels, and increasing downforce. 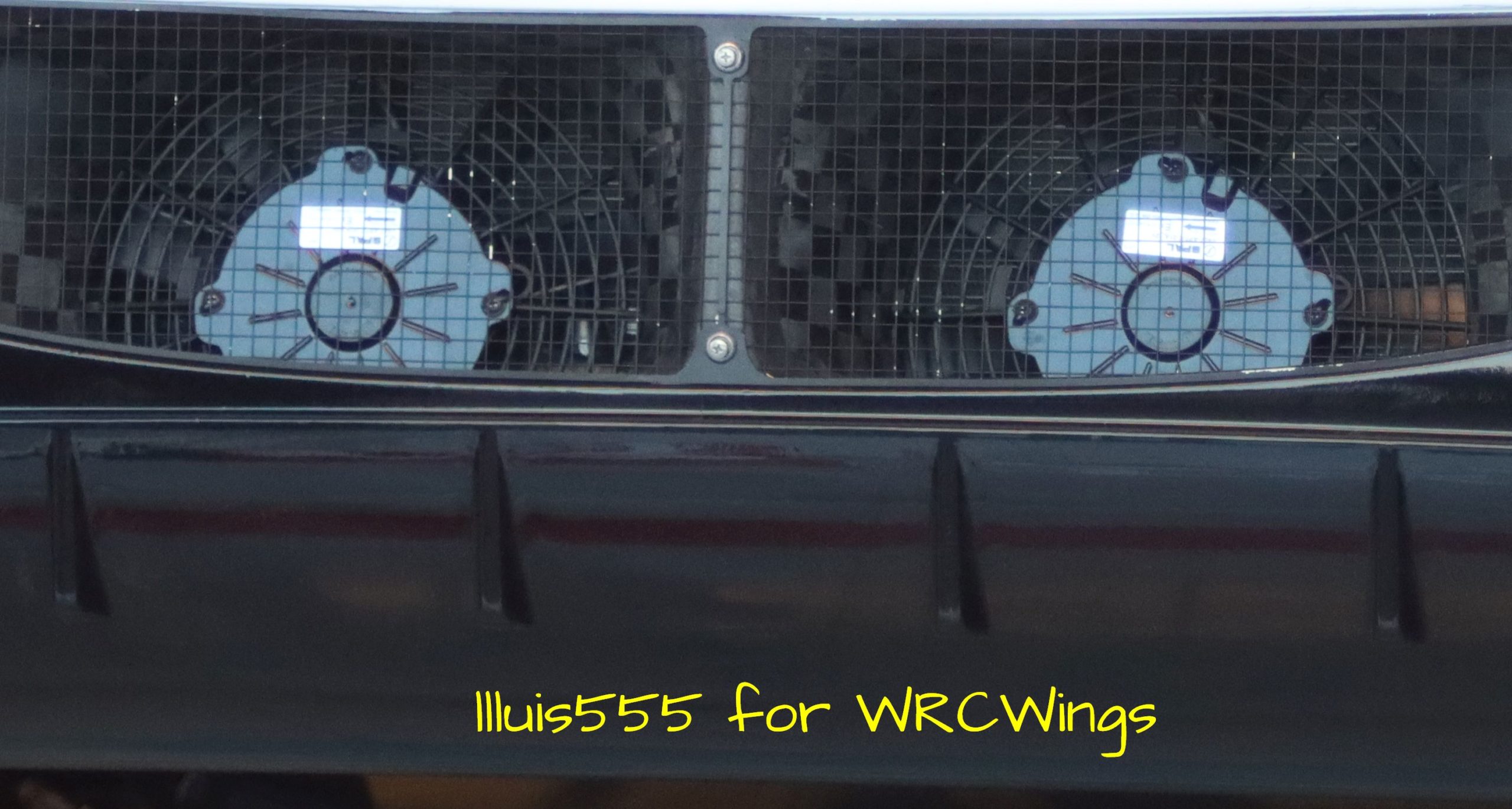 The image also shows the radiator behind the fans, placed in a vertical disposition, as in the Puma. In both cars, the weight of the radiator/fan pack is located at the rear end of the car, that is, suspended mass (overhang), which affects their cornering capacity, especially at high speed, causing oversteering. 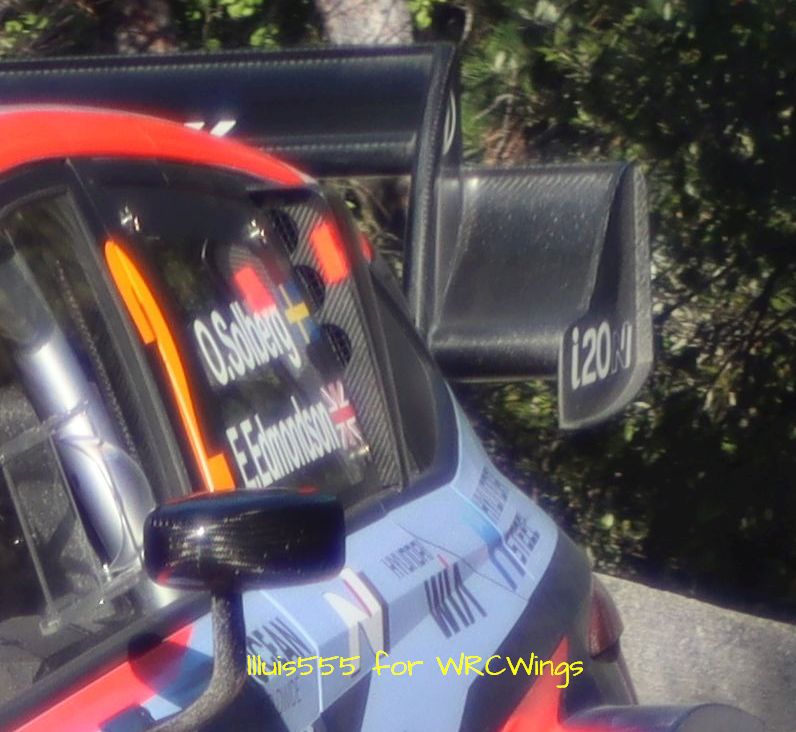 While the configuration seen in the Toyota and the Ford looks very similar, Hyundai has opted for a  different layout in the i20 N Rally1. The first big difference can be seen in the air pipes from the side intake: the pipes do not connect with the rear of the car, but slightly forward, conveying air into a horizontal box (kind of air filter). 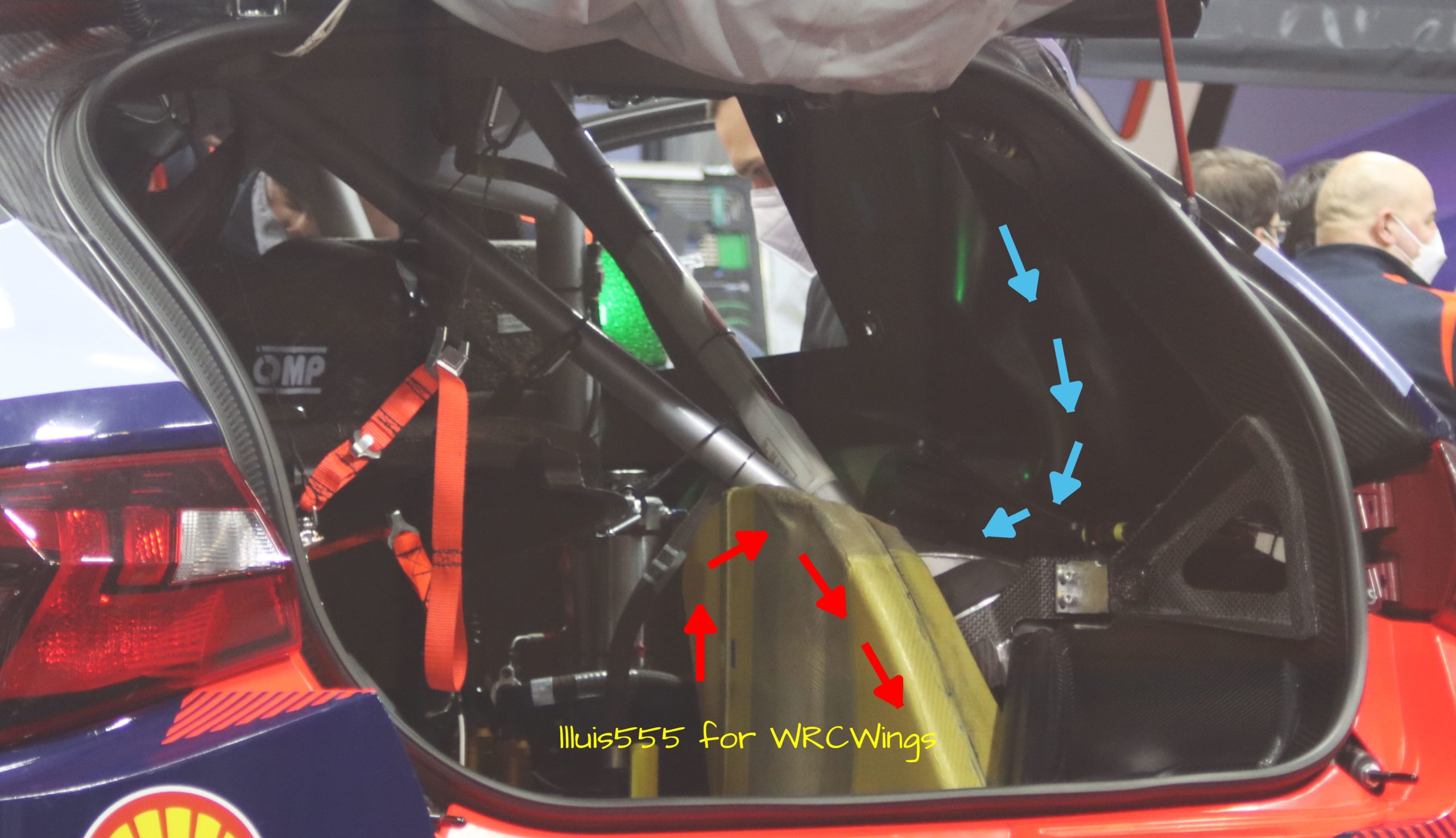 From this box, air is supposed to be sent to the radiator(s) and then forced to leave the car through the two yellow structures, which are extended till the rear bumper, as shown in the image below. The disposition of these structures seems to indicate that the radiator would be placed in a horizontal disposition, located on their base (thus far from the car rear end) while a fan (or a rotor) would be used to remove the hot air.

The different configuration of the Hyundai present several advantages with respect to the other cars:

a) the horizontal disposition of the radiator allows Hyundai to lower the center of gravity at the rear of the car, which is always good, in terms of stability,

b) the placement of the radiator further away from the rear end of the car and over the rear axle allows to avoid suspended mass, which is good for better negotiating of corners, and

c) the use of the pipes for conducting the air to the rear bumper allows them to send air to the required location (bumper sides) and with the required direction (horizontal) to use it for removing air from under the car (in yellow in the image below), in combination with the (centered) exhaust gas exit. 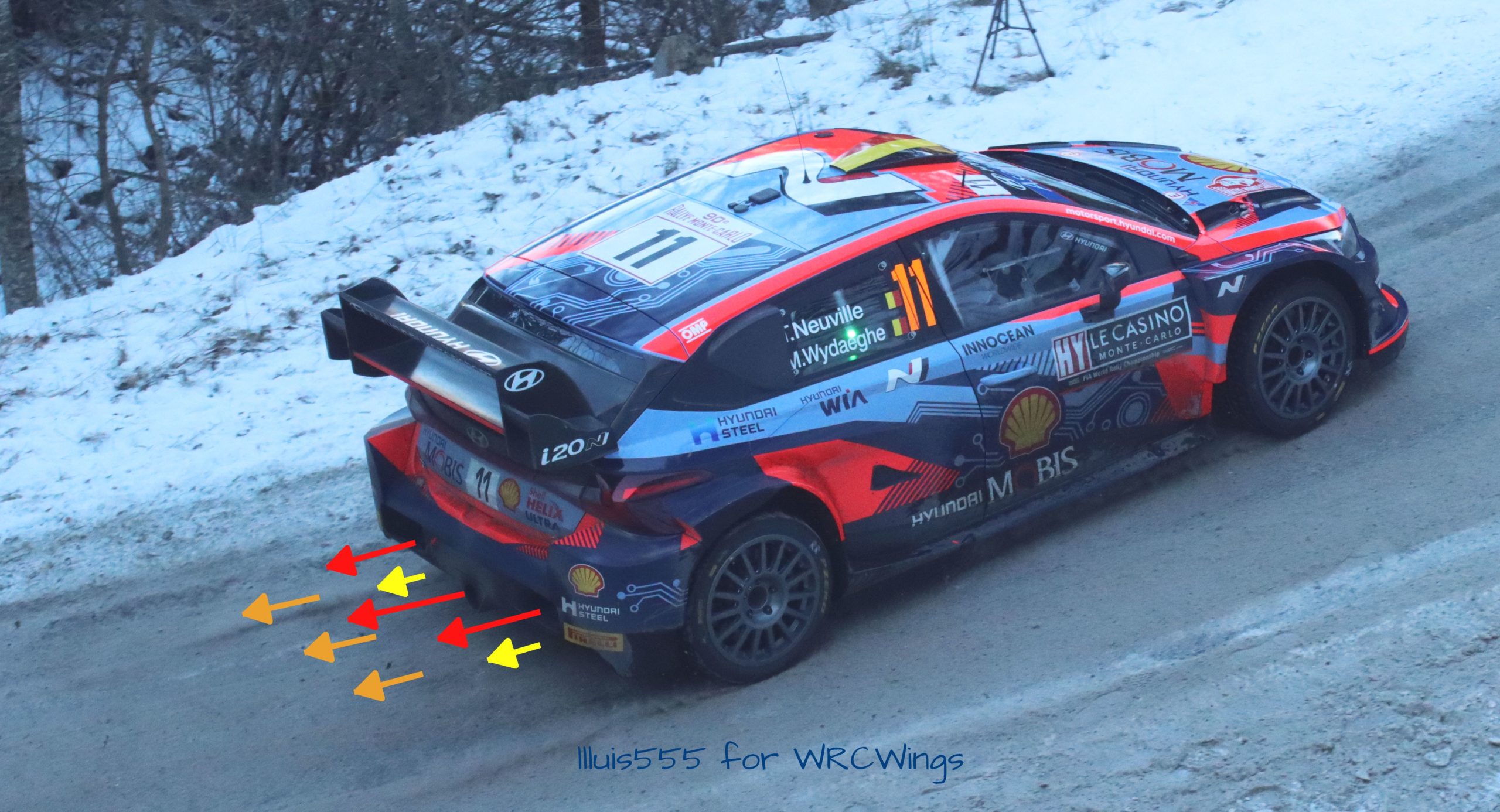 The system also presents some disadvantages: the complexity of the internal pipes surely generates a higher pressure drop in the fresh air stream, causing a reduction in the cooling capacity, while less space is available inside the rear of the car to insert/extract the second spare wheel.

In summary, the different configuration designed by Hyundai seems to give them an advantage in terms of car behavior, but it may have also an impact on the cooling capacity of the hybrid unit, which in some hot events might be a problem.

Drivers have three map alternatives for boost and three for regen, and they have to select one for each stage, that cannot be changed until the end of the stage. Images from Monte-Carlo show how the MSport drivers select the maps: through two selectors installed in the steering wheel. The image below shows the inside of the Ford Puma Rally1 of Fourmaux/Coria during the shakedown, which was done (at least on that run) with map 2 in regen phase (yellow selector) and map 2 in boost (blue). 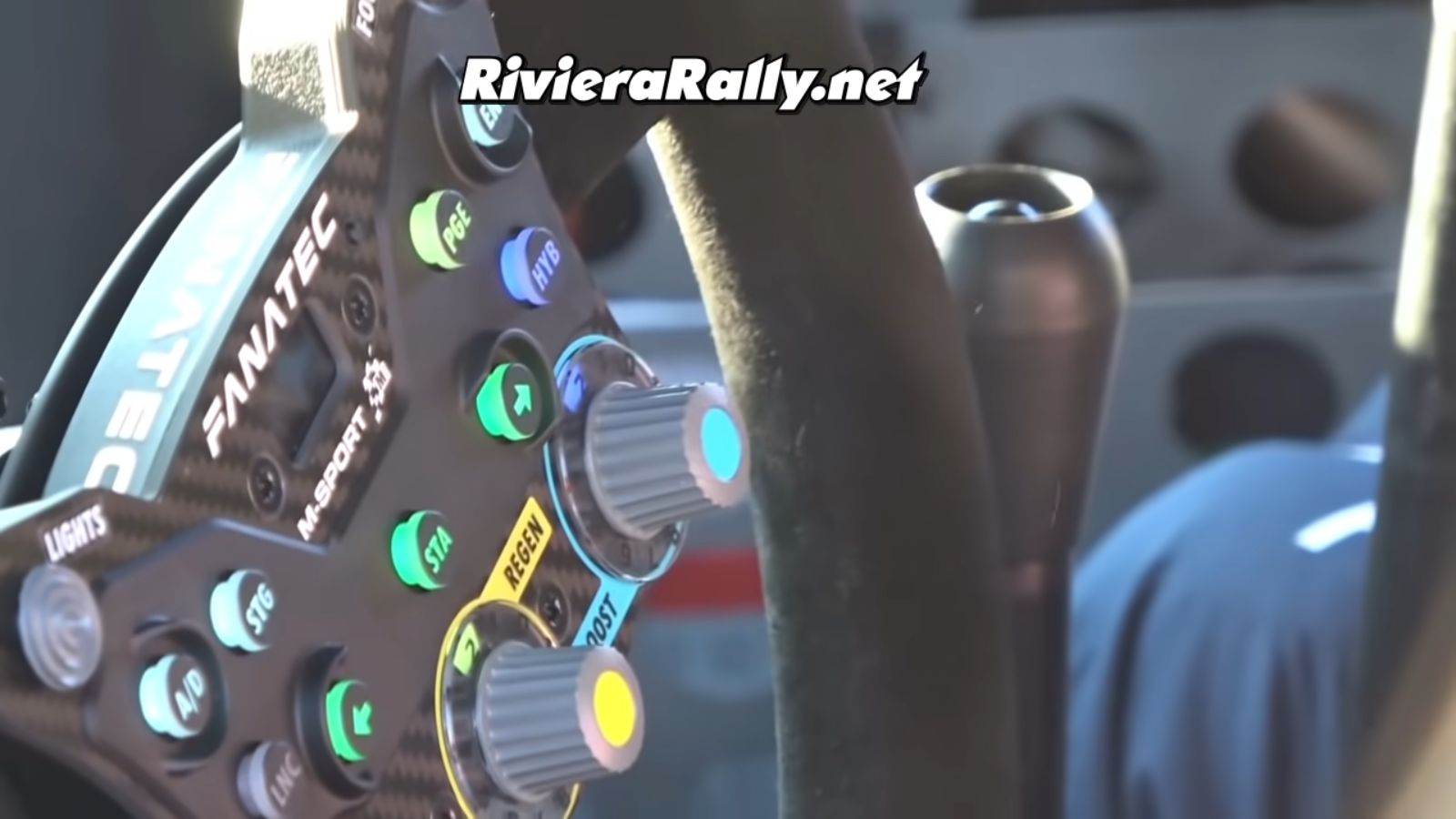