When looking at the exhaust, you’d be forgiven to think that its position doesn’t matter much. But in a highly competitive sport like the WRC, where every split second counts and a lot of money is on the line, every little detail becomes significant. Sure, compared to other more obvious objects that impact the car’s performance (motor, front, and rear wing, underfloor, driver, …), it might play a minor role, but it does play a role when it comes to reducing drag.

When an object travels through space, it moves the air in front of it out of its way. The high-pressure area in the front of the car (as air compresses when colliding with an object) creates a low pressure/vacuum area in the back of it as the air can’t fill the space behind the car quick enough. This is caused by flow detachment on the rear edges of the object. The pressure difference leads to a force in the opposite direction to a car moving through the air, due to the pressure difference, which is known as pressure drag. The faster the car moves, the more drag it creates (if the speed is doubled, the drag is quadrupled). 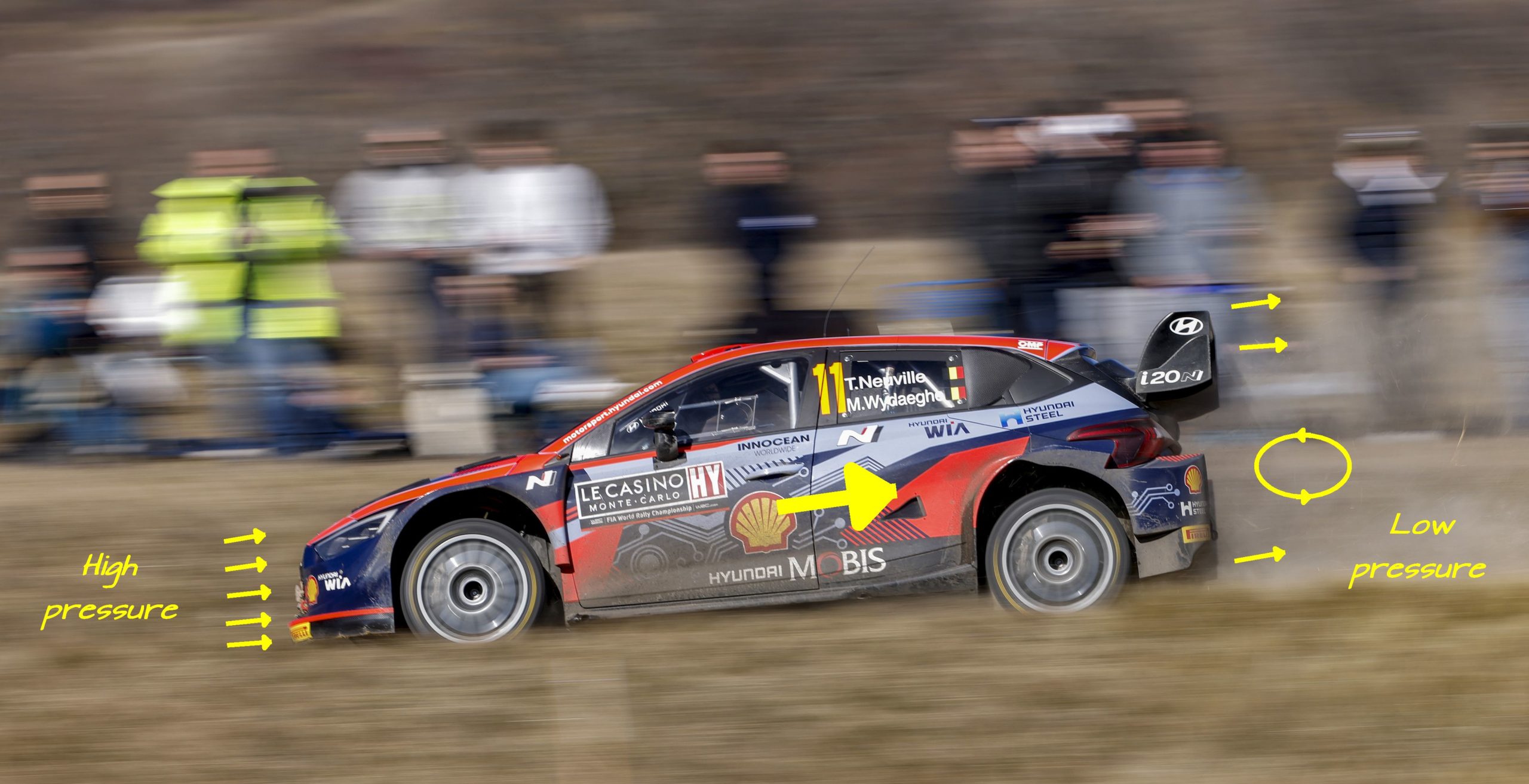 “Drag is a mechanical force generated by a solid object moving through a fluid”. A rally car faces high pressure on the front due to the impact with air while generating a low pressure at the rear, where air recirculates. The difference in pressure results in a force (drag) that pushes the car back.

The air drag in the back of the car can be reduced using different appliances like the rear wing, roof spoiler, rear bumper, diffuser, exhaust gases, etc.

Interactions between diffuser and exhaust

The positioning of the exhaust is not explicitly regulated but is impacted by some other regulations or implementations of new technical devices. Back in 2017 when the WRC+ cars were introduced, diffusers were allowed. A diffuser is an asymmetrical device on the car’s underbody that lowers the air pressure under the back of the vehicle by increasing the speed of the underfloor airflow. This results in a suction effect and thus more downforce (similar to the shape of an airplane wing put upside down). However, when interrupted by an object like an exhaust, its suction is heavily affected. So, teams ended up putting the exhaust above the diffusor. 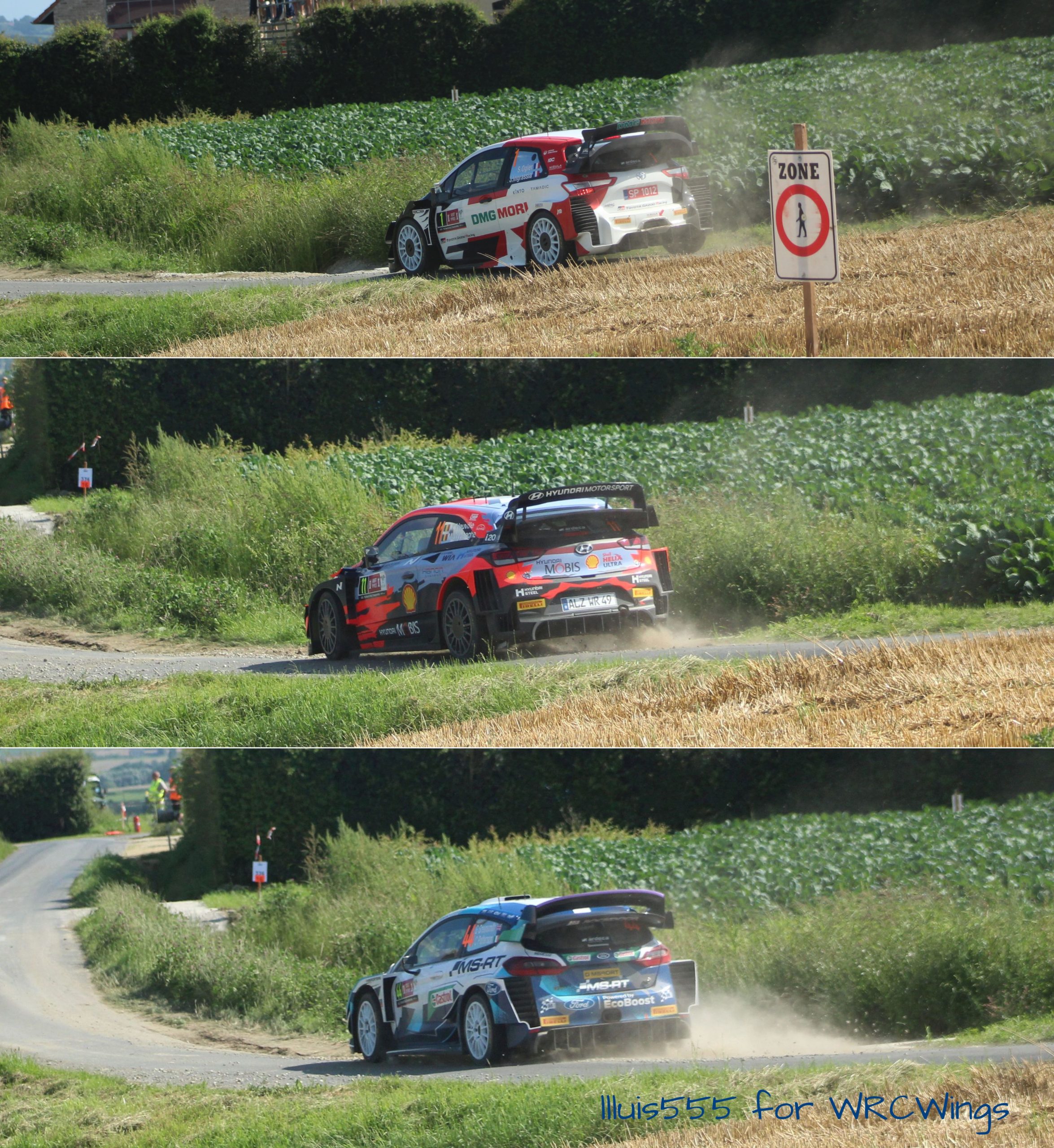 In contrast to the WRC+ regulations, the new Rally1 cars are no longer allowed to use a diffuser. Still, the exhaust is integrated slightly above the underfloor to not disturb the airflow under the car (as otherwise, it would create vortexes that would cause additional drag). 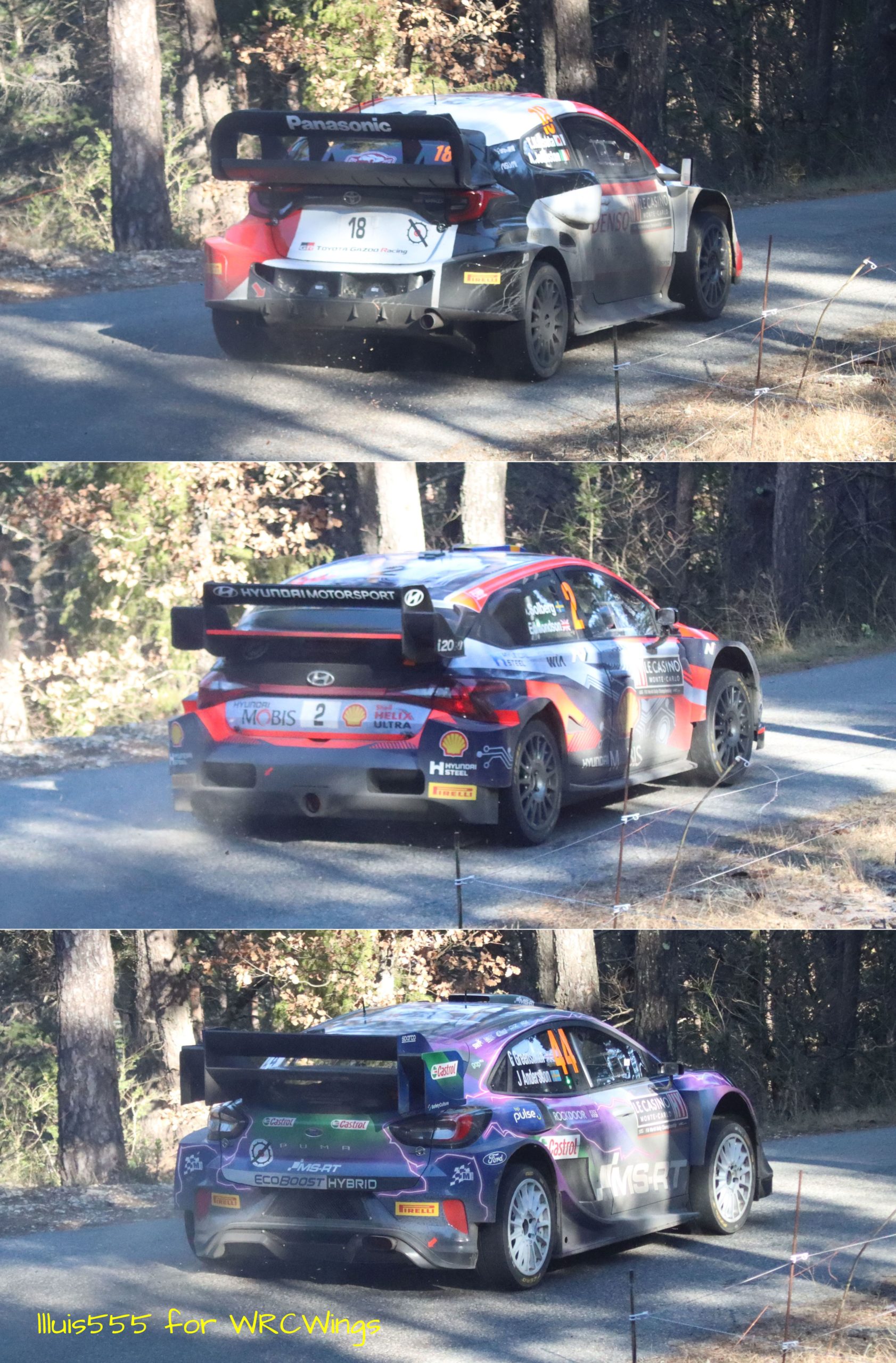 The exhaust and its role in reducing drag

As we learned, there is a low-pressure area behind every forward-moving car. The drag is reduced by filling up this low-pressure area behind the vehicle with air from the exhaust. The exhaust gases are pretty hot compared to the ambient temperature. The temperature difference is even bigger at a fast stage (flat out sections require full throttle and thus higher air temperatures in the exhaust system; WRC SWE – 121,5 km/h –), a cold stage (WRC Monte & SWE – 0C and -5C average temperature, respectively – ) and stages far above sea level (WRC ARG – 2000m altitude –). This effect is more significant than ever as with the Rally1 regulations, there is no diffuser allowed to reduce the drag behind the car. This leaves the manufacturers with fewer options to increase the grip in the back of the vehicle. 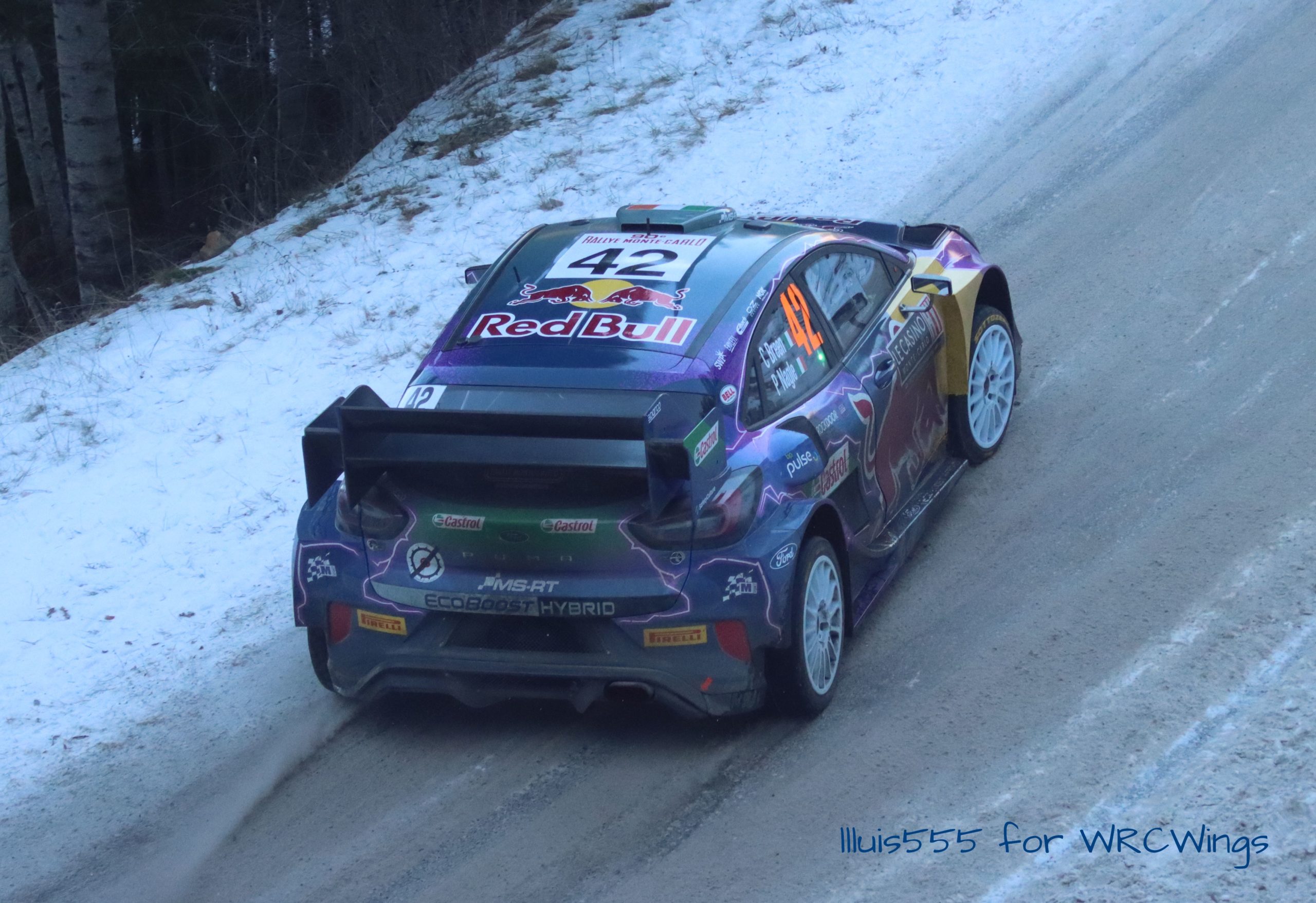 You might assume that the exhaust is positioned in the middle of the car to reduce the drag evenly. However, Hyundai opted for an exhaust on the right of their WRC+ cars. They also experimented with an exhaust in the middle but soon switched back to its original position. It seems that Hyundai was accepting an uneven reduction of drag on their WRC+ cars in favor of cooling layouts.

With the Rally1 regulation and the implementation of hybrid power units, the teams had to rethink the positioning of the exhaust. For cooling the hybrid and its battery, the cars now feature air inlets on the upper part of the car. M-Sport uses one big central fan to release the air after it passes by the hybrid system and avoid the airflow stalling. TGR uses two smaller fans (also in the center) to achieve a similar effect, while Hyundai implemented two air exits on each side. 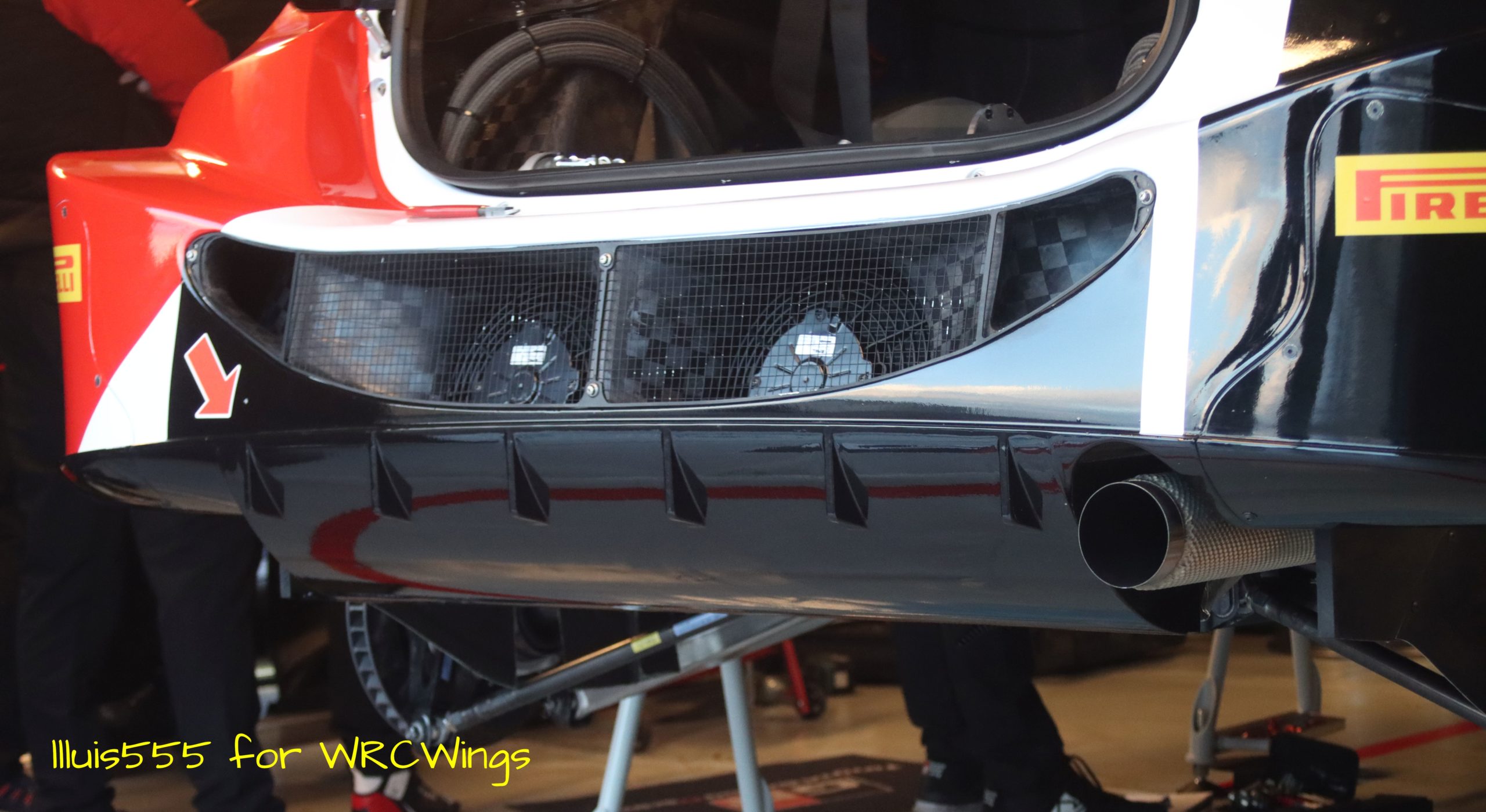 These air releases from the hybrid cooling system contribute, together with the exhaust, to reduce drag at the rear, by filling up the low-pressure area behind the vehicle, while adding energy to the air flowing under the car.

Due to the respective designs, M-Sport and TGR moved their exhaust onto the right side, while Hyundai has the exhaust again back in the center. 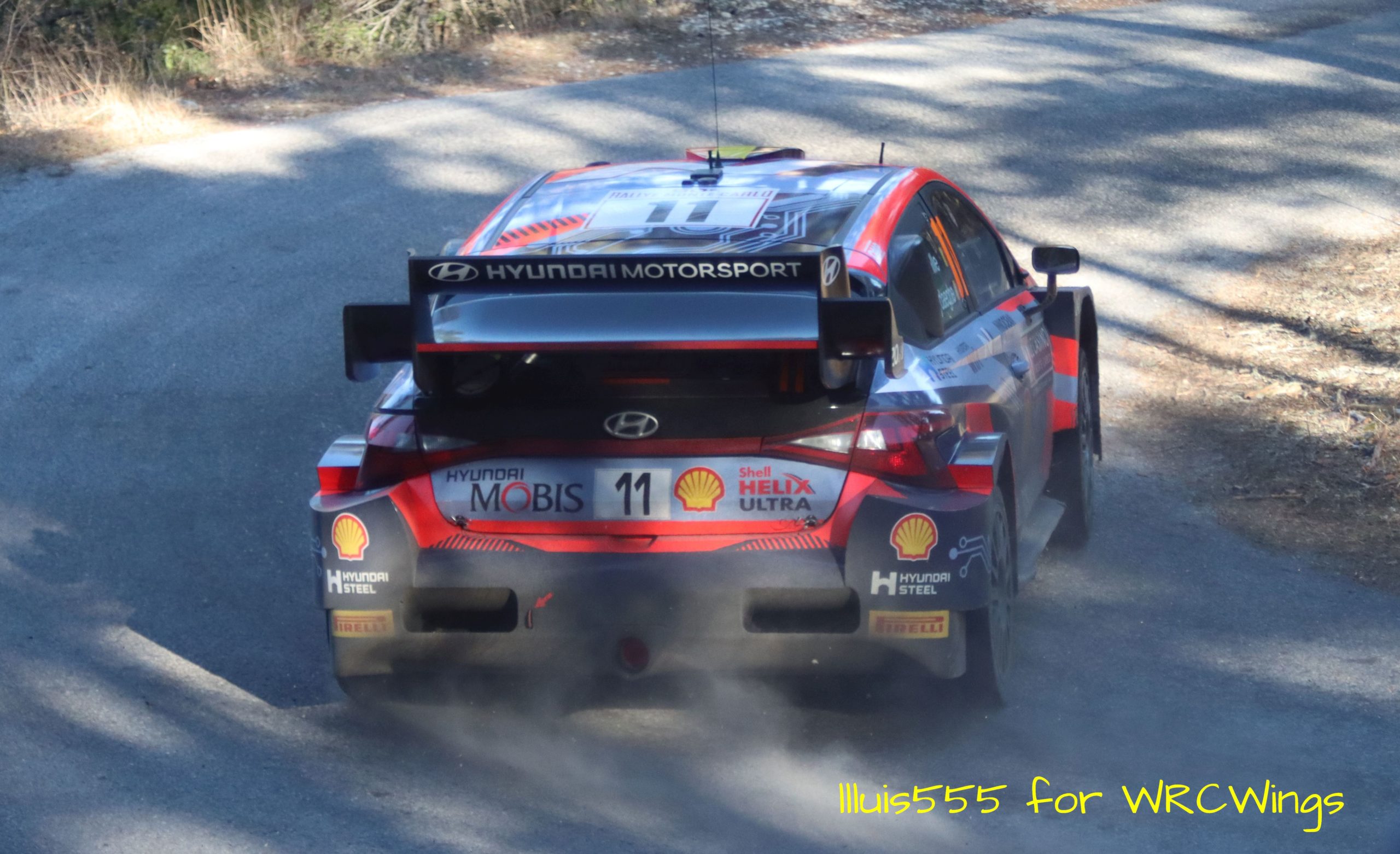 Judging by the evidence in the pictures, Hyundai is likely to have the most balanced approach to reduce the drag behind the car, while M-Sport might have the most robust system. This is mainly due to the size of the fan and its independence to throttle position.

The before mentioned are all assumptions; since we don’t have access to any simulations or CFD data, the difference between the systems cannot only be estimated and not put in numbers. Time will tell, and we might see some exhaust setups change throughout the next few rallies.