The story of the Alpine A110 Rally RGT starts back in 2012 when the Renault group announced its intention of relaunching the iconic Alpine brand. The identifying principles of Alpine, compact size, lightweight and agility, would be again applied to the design of a new mid-engined two-seat sports coupe, two-wheel drive, that should maintain the spirit of its predecessors and in particular the successful A110 ‘Berlinette’, not only on normal roads but in rally stages.

The second important part of this history arrived only a few months later when Alpine and French racing team Signatech agreed to collaborate in motorsport, starting with the participation of the A450 prototype in the European Le Mans series, which they won from the very first year (2013).

For the design of the A110, Alpine relied not only on their own team of engineers, including Chief Engineer David Twohig, Head of Design Antony Villain and Chief Test and Development Driver Laurent Hurgon, but also on the resources of Renault Technocentre (Guyancourt) and Renault Sport’s engineering center (Les Ulis). 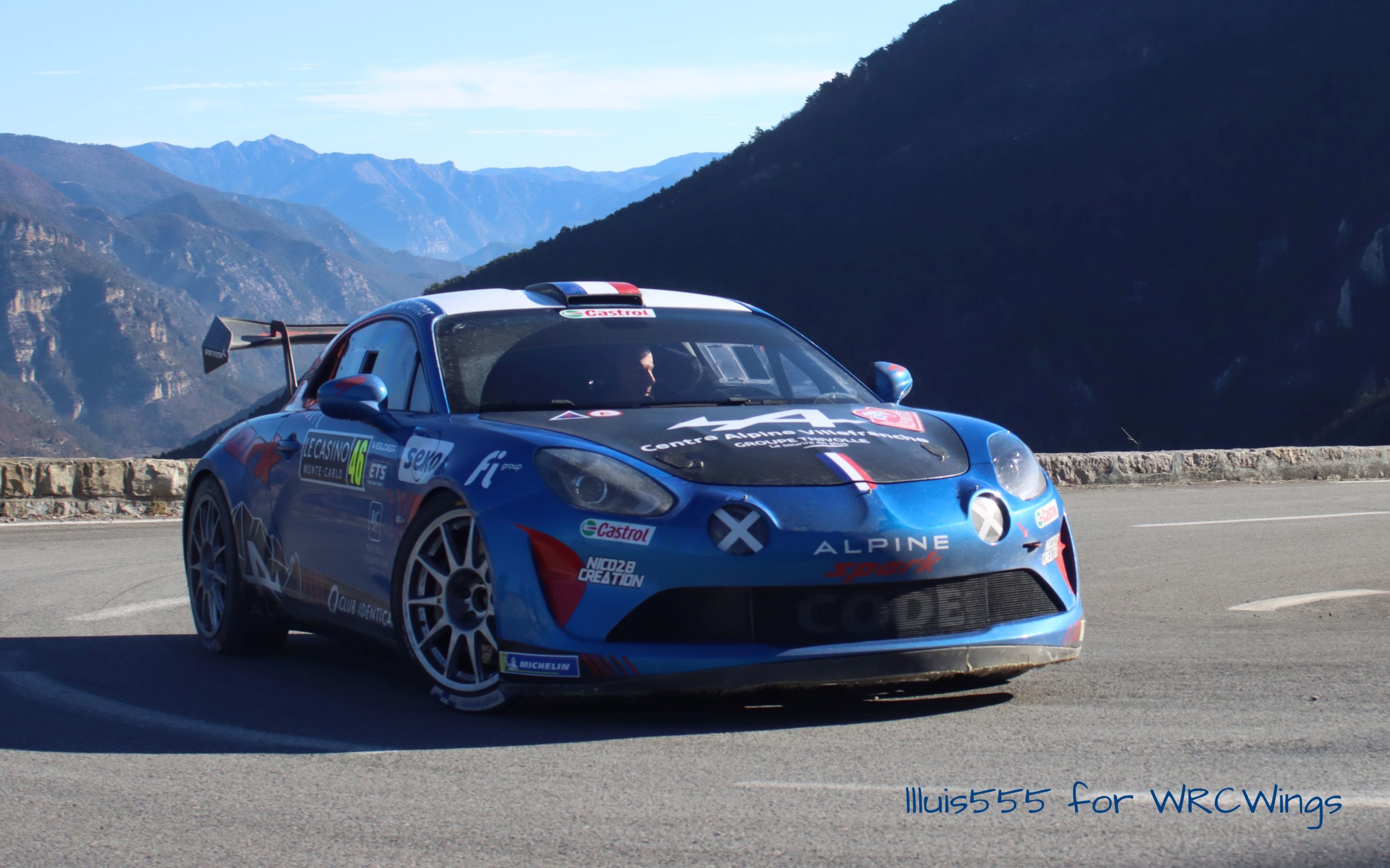 The road car was first revealed at the Geneva Motor show in March 2017. Based on a full aluminum platform, the weight was reduced down to 1.080 kg with details such as the removal of the handbrake; instead, Brembo solution with the parking brake into the main rear caliper was used.

The A110 was originally equipped with a 1.8l 4-cylinder turbocharged engine developed by the Renault-Nissan Alliance, with a maximum power output of 252PS and maximum torque of 320Nm, leading to an excellent power-to-weight ratio of 4.3 kg/PS. Power was transmitted through front transmission. Other versions of the road car has been released since then, with the A110S as the top version available.

The first racing versions of the A110 were designed by Signatech for circuit races: the A110 Cup (270PS, reduced ride height by 40 mm, a rear spoiler and a weight of 1050kg) and the GT4. But Signatech was already working on the rally version of the car.

The Alpine A110 Rally was presented officially during the Rallye Mont-Blanc Morzine 2019. Based on the chassis of the Alpine A110 GT4 and Cup, the car was modified to meet rallying specificities: threeway hydraulic suspension, new Brembo brakes and specific safety elements such as an FIA homologated roll cage and Sabelt bucket seat and six-point harness system.

Coupled with a sequential six-speed gearbox and a limited-slip differential, the engine from the production model was also specifically adapted to the rally, with power increased to more than 300 horsepower.

Fluid dynamics simulation (CFD) and wind tunnel experimental work were used for the design of the aerodynamics. The final result was a car with reduced resistance to air, thanks to an excellent drag coefficient of 0.32 and a contained front area of 1,94 m². But still high, when compared with the classic model A110 Berlinette, which benefited from a very small front area (1,24m²) that largely compensated the higher drag coefficient of 0,38. The comparison has to be made with the value of the SCx (the product of the drag coefficient and the front area, as both equally contribute to the drag). The result is an SCx of 0,47 for the classic model, against 0,62 for the 2017 model, which means that the new A110S generates a 30% higher drag at the same speed than the A110 Berlinette.

The higher engine power compensates for the higher drag, allowing the new (road) car to reach a top speed of 250km/h without the need for a rear spoiler, according to Alpine. The company has always been reluctant to install it in the road car, in order to preserve the iconic silhouette… until 2022, when they have finally started to offer an optional aero kit (see at the end of the article for more details). 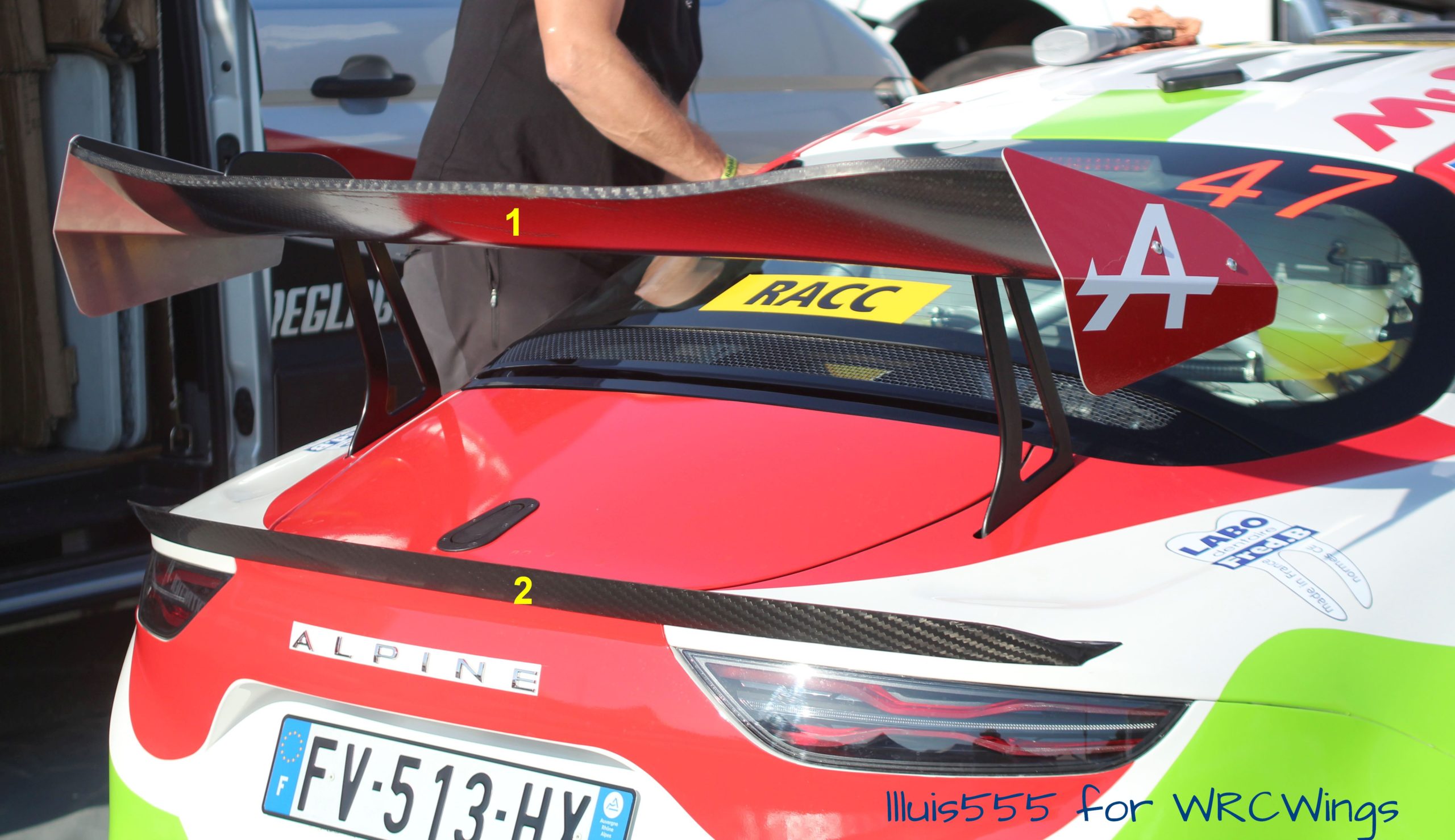 The rally version includes a more complex aero kit, also designed and developed by Signatech. It is a rare case of a car combining a rear wing (1) and a small spoiler (2). This was possible by the high separation of the rear wing with respect to the boot. The presence of the spoiler contributes to keeping the air flowing over the boot attached, thus minimising speed losses that would reduce the wing efficiency, as well as would increase drag. 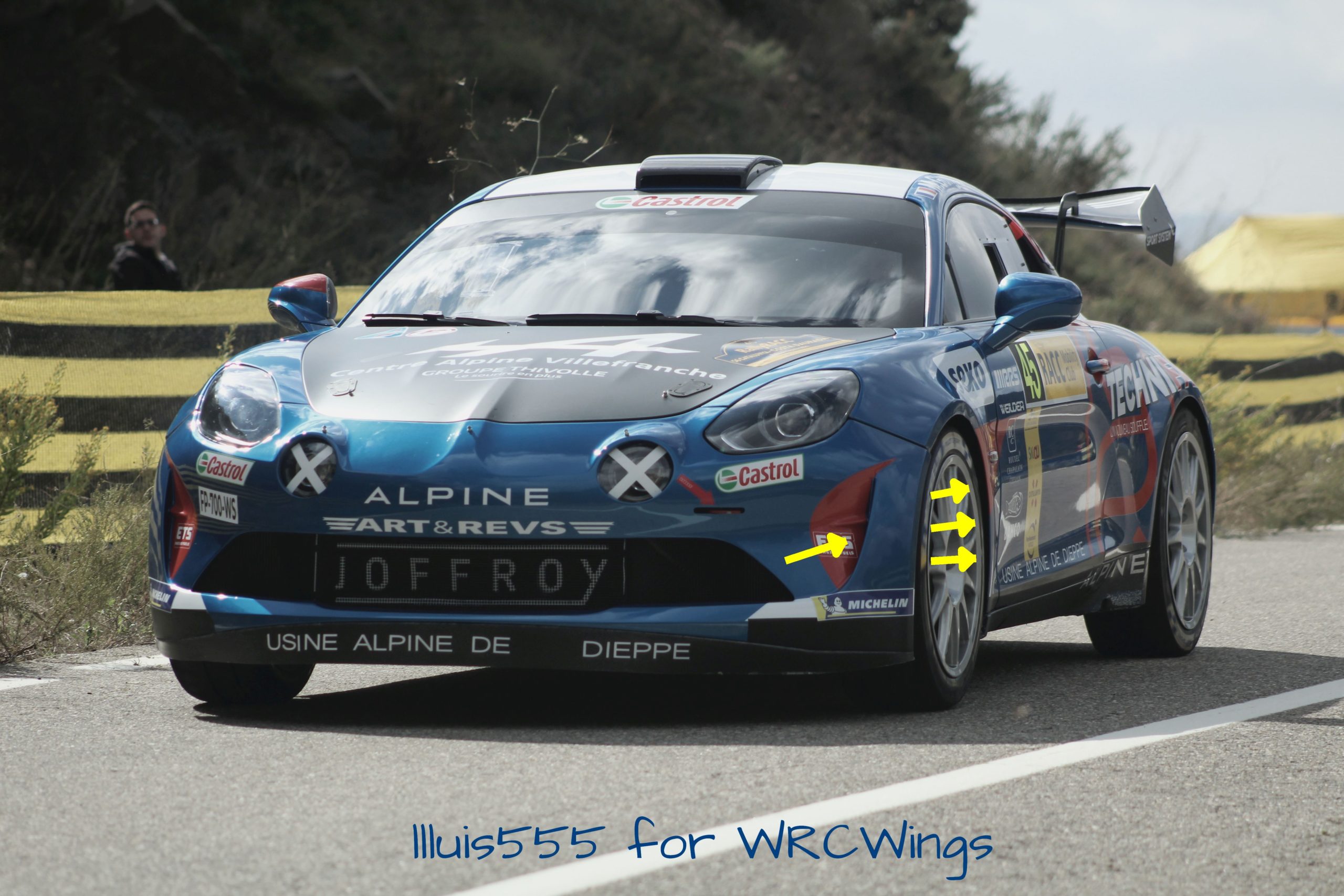 Other aero details were the inclusion of a vertical black strip in the front splitter (that with the sticker Usine Alpine de Dieppe in the image above) as well as air inlets on both sides of the front bumper to create a curtain along with the front wheel wells (also shown in the image above), that acts as a barrier against the external main flow. The result is that this flow does not interacts with the wheels, thus reducing drag.

The work at the wind tunnel contributed to a better design of the car, by implementing a completely flat floor and a small diffuser under the rear bumper, to reduce drag while obtaining significant amounts of downforce, by accelerating air flowing under the car.

Numerical simulations (CFD) were also key for details such as the design of the single exit active sports exhaust system, resulting in a better performance. Note that the exhaust exit is located at the center of the rear diffuser, making it more efficient, as the energy of the exhaust gases is used for better removal of air through the diffuser (Exhaust blown diffuser concept).

The car first received the FFSA homologation in March 2020, allowing to take part in the French Rally Championship  since Le Touquet. François Delecour, who had also participated in the test program since 2019, and Cedric Robert were chosen for the debut, and the first finished the event in 11th position, while Robert set five top ten stage times in the second leg, confirming the progress of the car.

The next event Montblanc Morzine, totally confirmed the potential of the car, when Manu Guigou and Alex Coria set the fastest time on the very first stage (SS1 La Côte d’Arbroz – Praz de Lys 1 ) at an average speed of 119,9 km/h. The duo set two other scratches, to finish in an excellent third position, giving the car its first podium position. 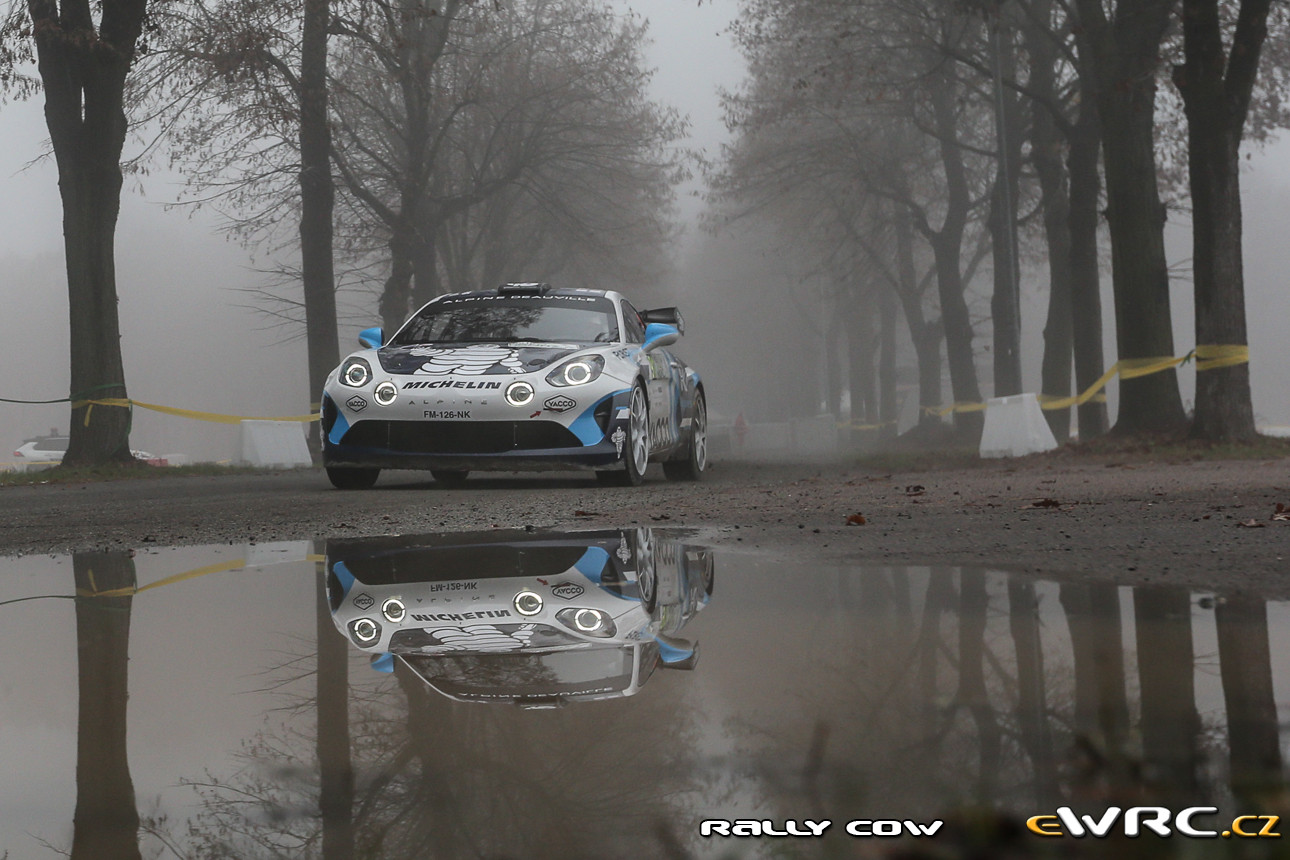 The debut of the car in the WRC took place in 2020 ACI Rally Monza, by Pierre Ragues and Julien Pesenti, who finished in 39th position (1st RGT). Many other cars joined the Championship in 2021 in the tarmac events (Monte-Carlo, Croatia, Ypres, and Catalunya), as part of the 2021 FIA RGT Cup. 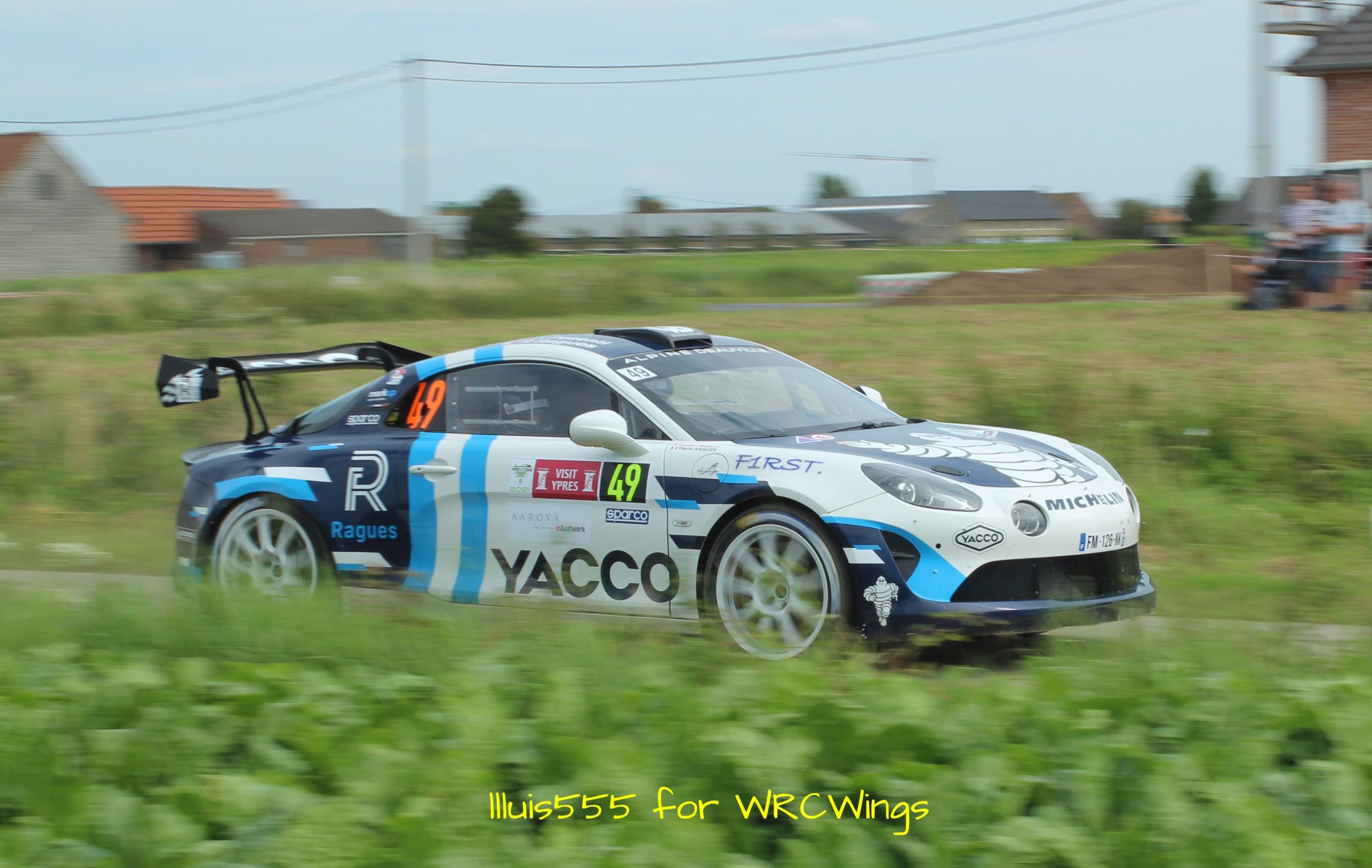 The car dominated the 2021 RGT Cup in all the five events, with the best absolute result by Ragues and Pesenti in Ypres, when they finished in 18th absolute position, as well as first RGT car. The French duo finally claimed the RGT Cup title, in spite of the three wins obtained by Manu Guigou and Arnaud Dunand (Monte-Carlo, Nova Gorica (ERC) and Catalunya). 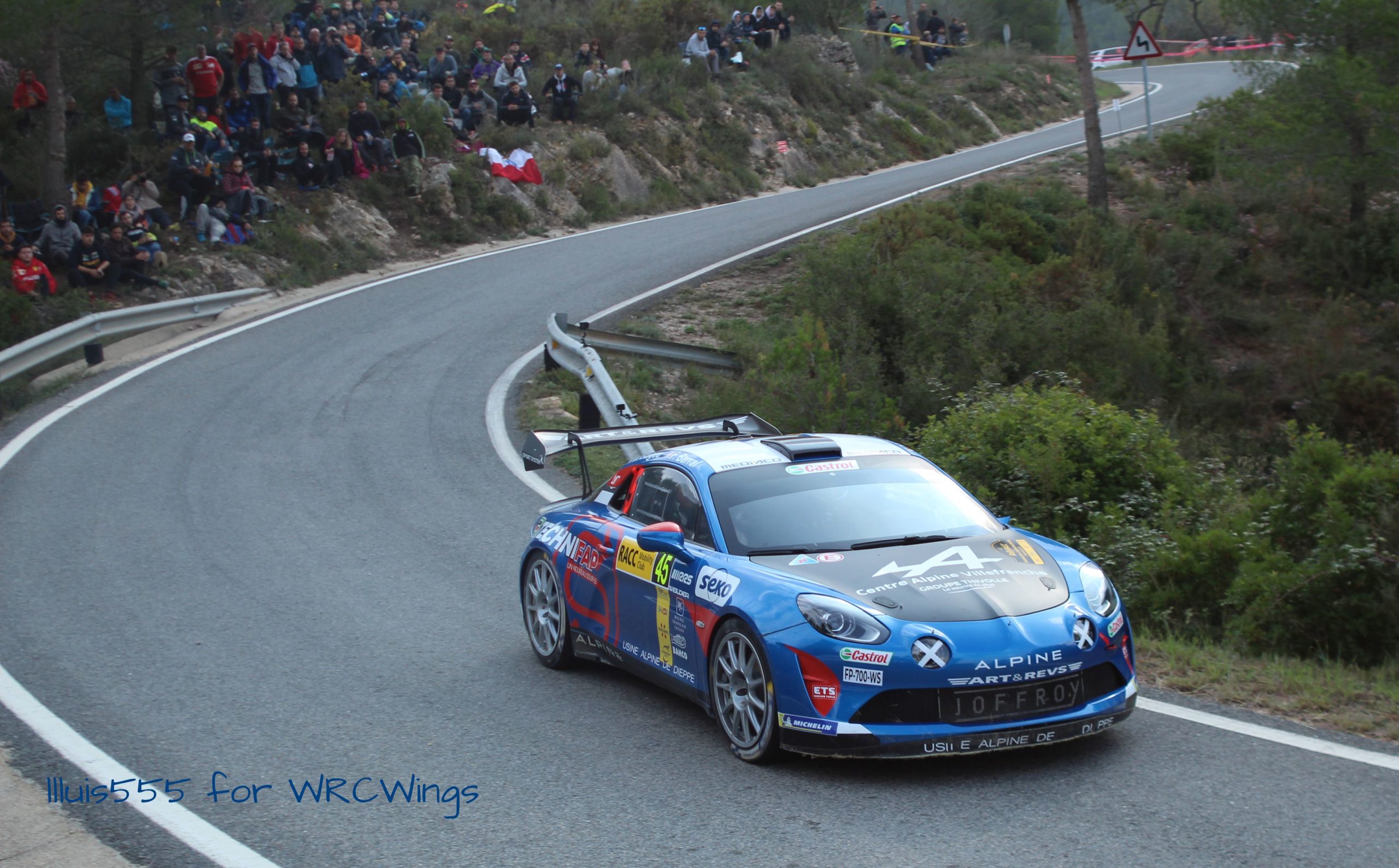 But the most remarkable result in 2021 came by Nico Ciamin and Maxime Martini, who won one of the events of the French Rally Championship, the Rally d’Antibes – Côte d’Azur ahead of a long list of Rally2 cars, giving the car its first absolute win in a national event. 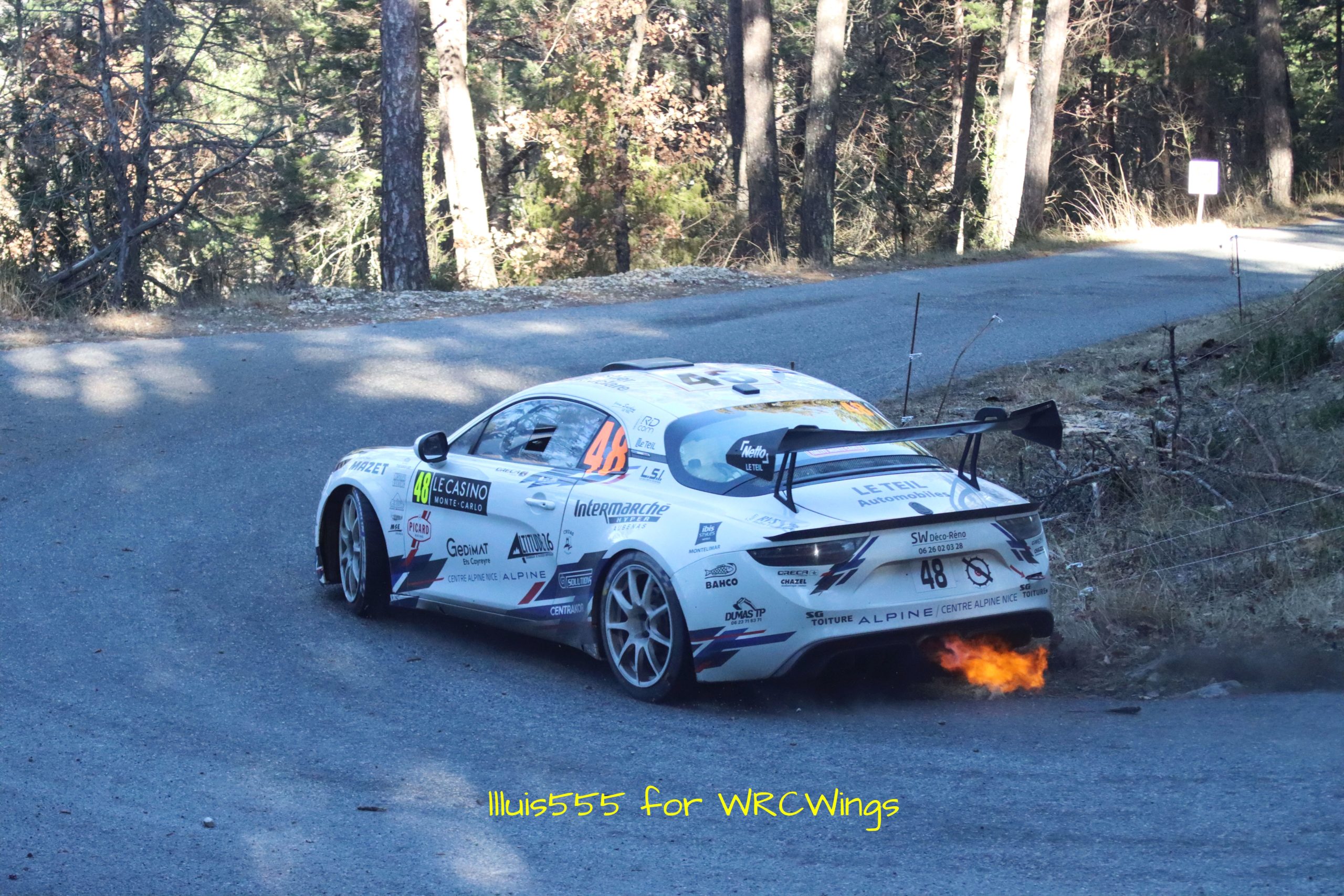 For 2022, a new edition of the FIA RGT Championship started in January in the Rallye Monte-Carlo, where Astier/Vauclare obtained their first win in the category. The 2022 Championship continues now with some ERC events, starting next week in Rally Islas Canarias and followed by Rally di Roma Capitale (July) and Barum Czech Rally Zlín (August), to end up in October in Rally Catalunya. Also, the car will continue to be present in National Championships, such as in France, where Cédric Robert and Matthieu Duval finished fourth in the first event of the season, the Rallye Le Touquet – Pas de Calais, reaching the third position in the recent Rallye Charbonnieres. 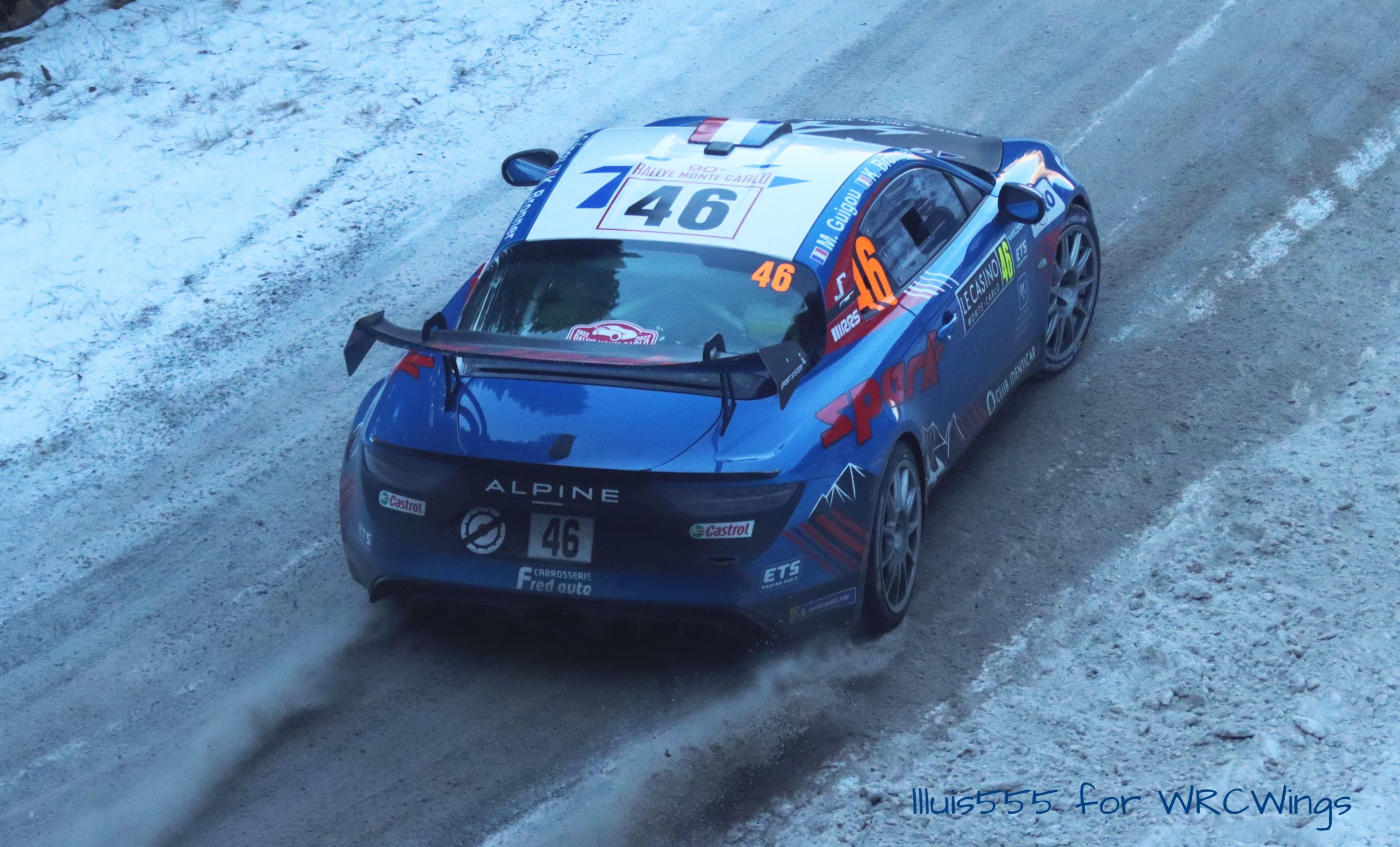 On the road car side, 2022 has represented the arrival of an optional ‘Aero Kit’ to unlock the top speed to 275km/h. This kit consists of a carbon rear spoiler for improved aerodynamic downforce, a carbon front blade and extended fairings at the front underneath the car to increase the efficiency of the rear diffuser and flat floor. At 275 km/h, high-speed stability is ensured by a 60 kg load gain on the front axle with the carbon blade and 81 kg on the rear with the carbon spoiler. This means a total of 141 kilos more support. The kit is the result of the work developed by Pierre Sancinéna,  aerodynamics engineer at Alpine Cars and his team, who went into partnership with his colleagues in Alpine F1 Team (located at Enstone) to take advantage of their methods, tools and facilities. 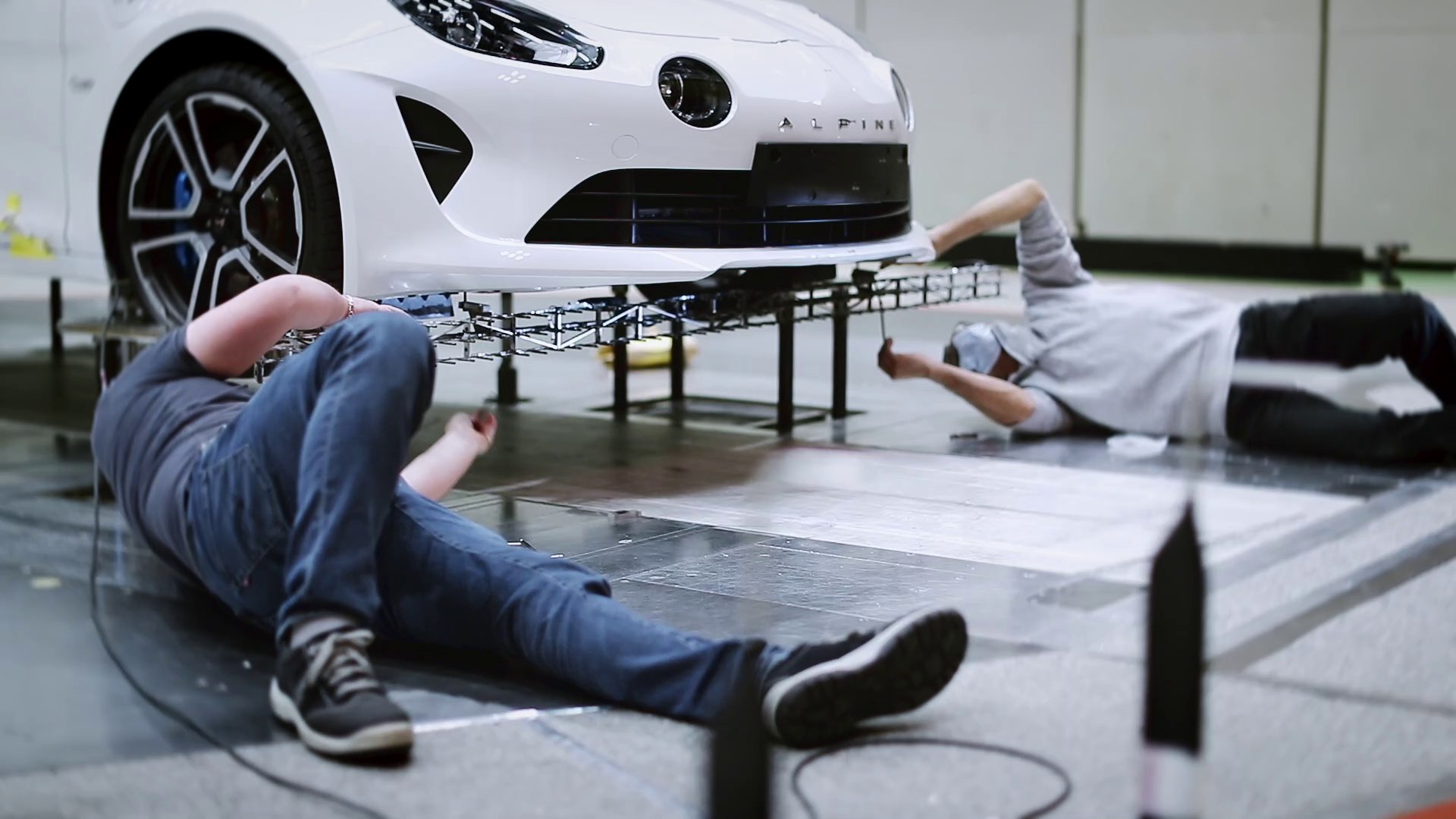 The video below explains how this partnership worked, allowing Sancinéna and his team to use lots of sensors same as used by F1 aerodynamics specialists or the Flow-Vis technique, a special paint developed by their colleagues in F1.

Use of Flow-Vis technique on an Alpine A110 Rally car in Renault Wind Tunnel facilities, Enstone, UK – image by Alpine/DPPI

Applied to the bonnet and wings of the car, it only spreads at a certain speed in a way that allows the movement of air flows over the bodywork to be studied. A highly visual tool that helps to confirm the calculations made on a computer via CFD. Also, they had access to Enstone facilities such as the wind-tunnel or the Race Control room, where to examine the real-time images and analyse the data.  displayed on their computer screens.