The recently presented Škoda Fabia RS Rally2 will make its debut as course car at next weekend’s Rally Bohemia. It will be the appearance on rally stages of the latest model to emerge from the Mladá Boleslav factory, which is expected to continue with the success of his antecessors. In the design of the new car, special attention has been paid to aerodynamics. Even though Rally2 regulations significantly restrict aero development, the work developed by Škoda engineers (coordinated by Aleš Rada, Head of Racing Car Development, and with the participation of Lukáš Vojík, Škoda Auto Aerodynamics Specialist) confirms that there is always room for improvement.

The result is an improved aerodynamic package that has been used by Škoda in the marketing campaign for the new rally model, with a dedicated video and press release. The achievements claimed include almost double the downforce and a significant reduction in the drag generated by the preceding model. We already reviewed the aerodynamics of the Fabia RS Rally2, soon after the first tests. But the devil is in the details, and here’s our review of the key points that have allowed Škoda to claim such impressive figures. 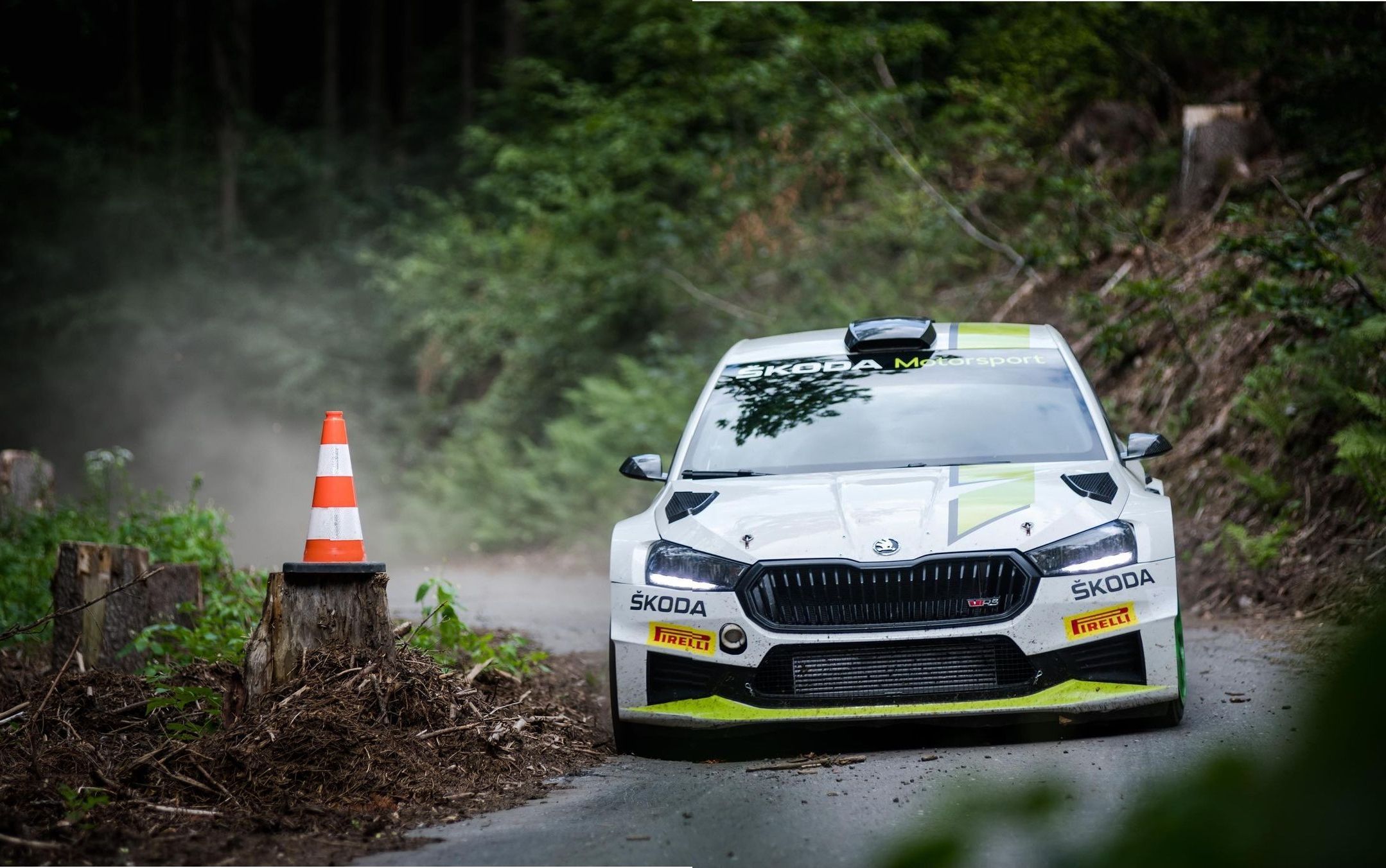 Downforce, or the force that pushes the car down to the ground and improves grip and turning ability, is the result of a pressure difference. We can generate downforce both by increasing the pressure above the car or by reducing the pressure under the car. And Škoda has worked on both sides, to improve the performance of the previous car. 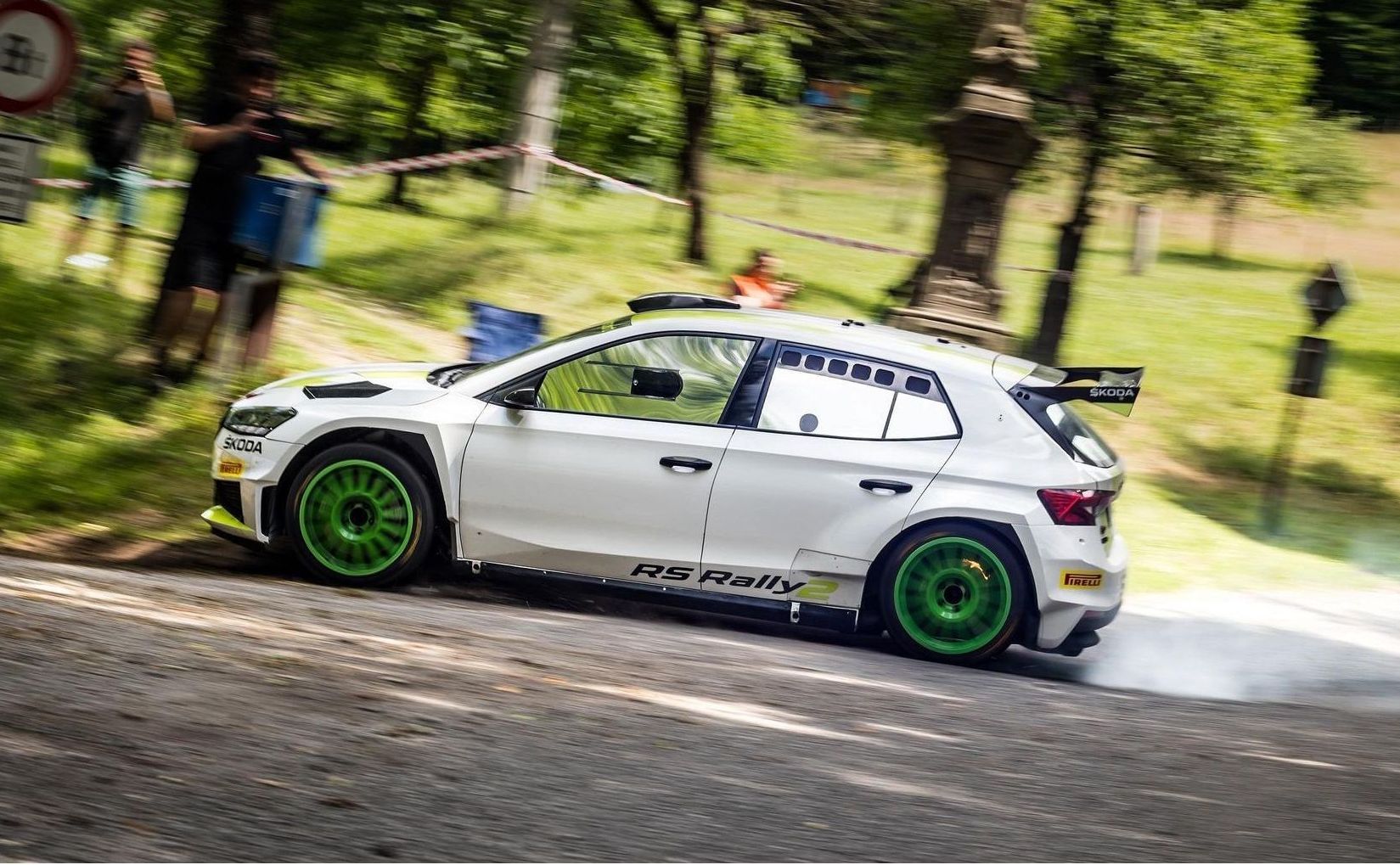 The main source of downforce on the car is the rear wing, due to the different speeds of air flowing above and under the (inverted) wing, which causes a pressure difference. 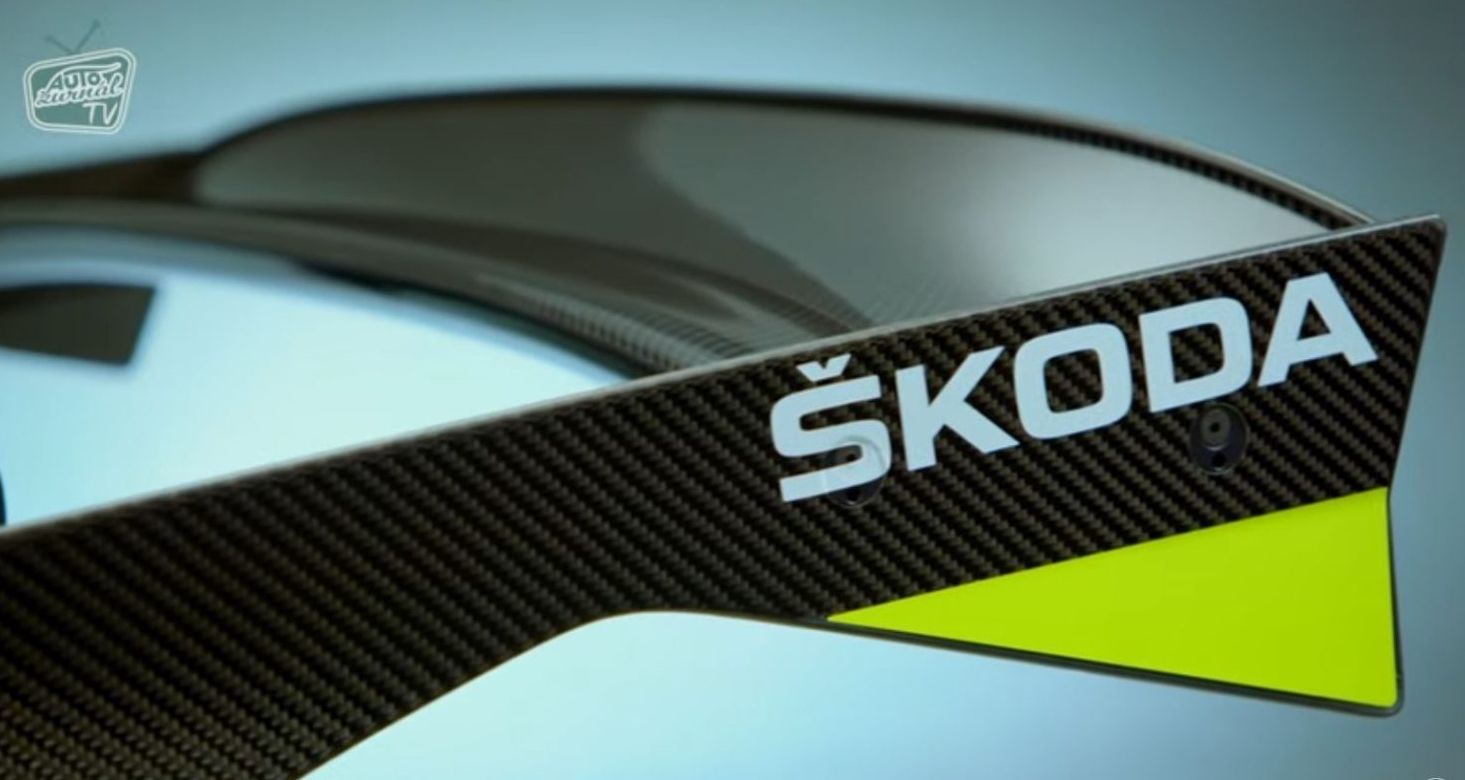 The design of the new Škoda Fabia RS Rally2 rear wing is completely different from the wing of the precedent car, as the images below show. 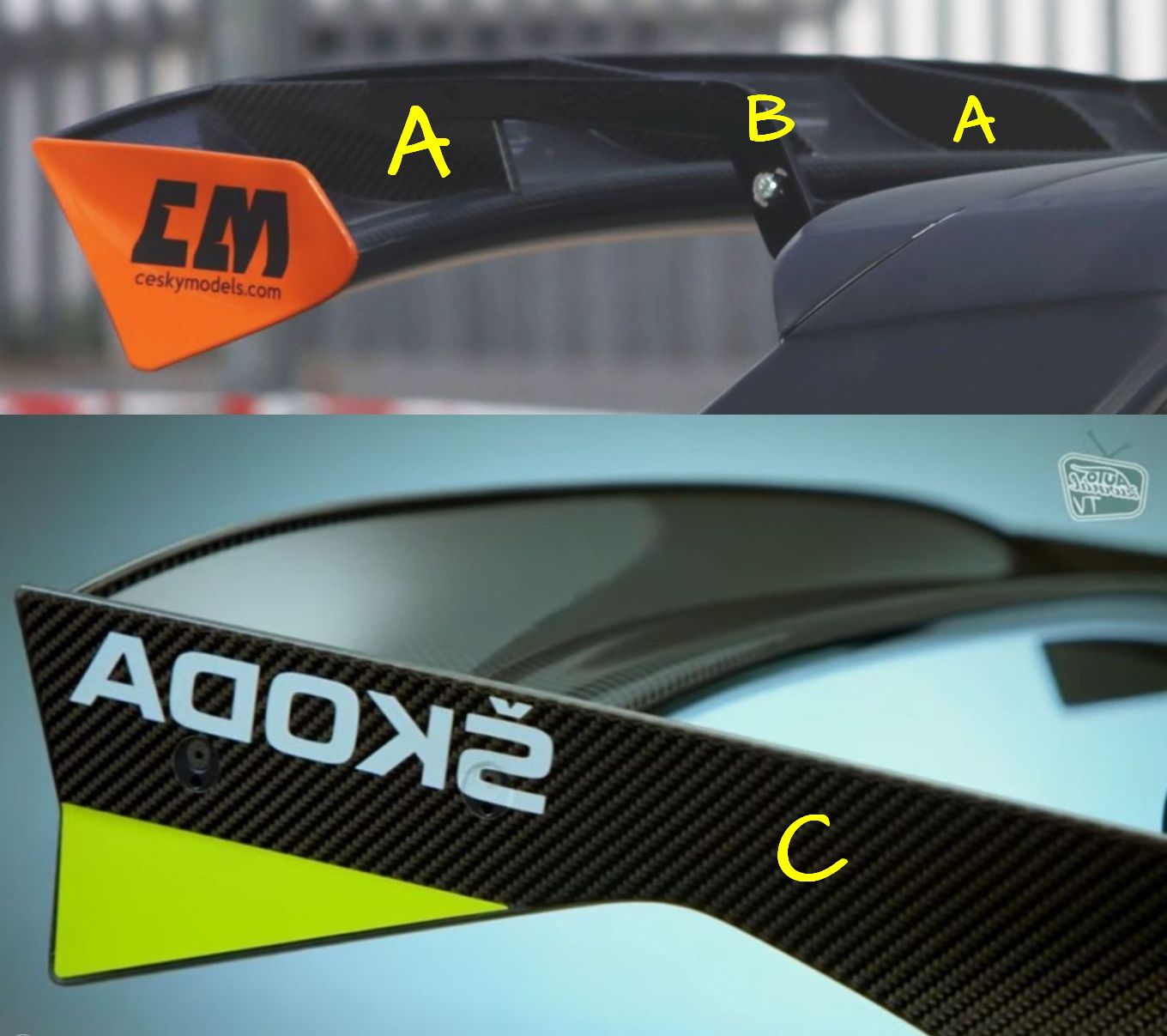 The first main difference is the removal of the vertical fins (A) over the wing. The fins contributed to generating downforce when the car was sideways; with the new wing, this contribution has been lost, but their removal leads to a reduction in drag, as air can flow freely over the wing.

The (swan neck) supports (B) have been removed from the center of the wing, and have been converted into finlets (C), prolonging the endplates (same as in the VW Polo R5) that support the wing by both ends. This means that the air flowing over the wing is not affected anymore by the presence of the supports, making the wing more effective in generating downforce. Also, the finlets act as a barrier, forcing air to flow under the wing instead of escaping to the sides of the car, which makes the wing even more effective. 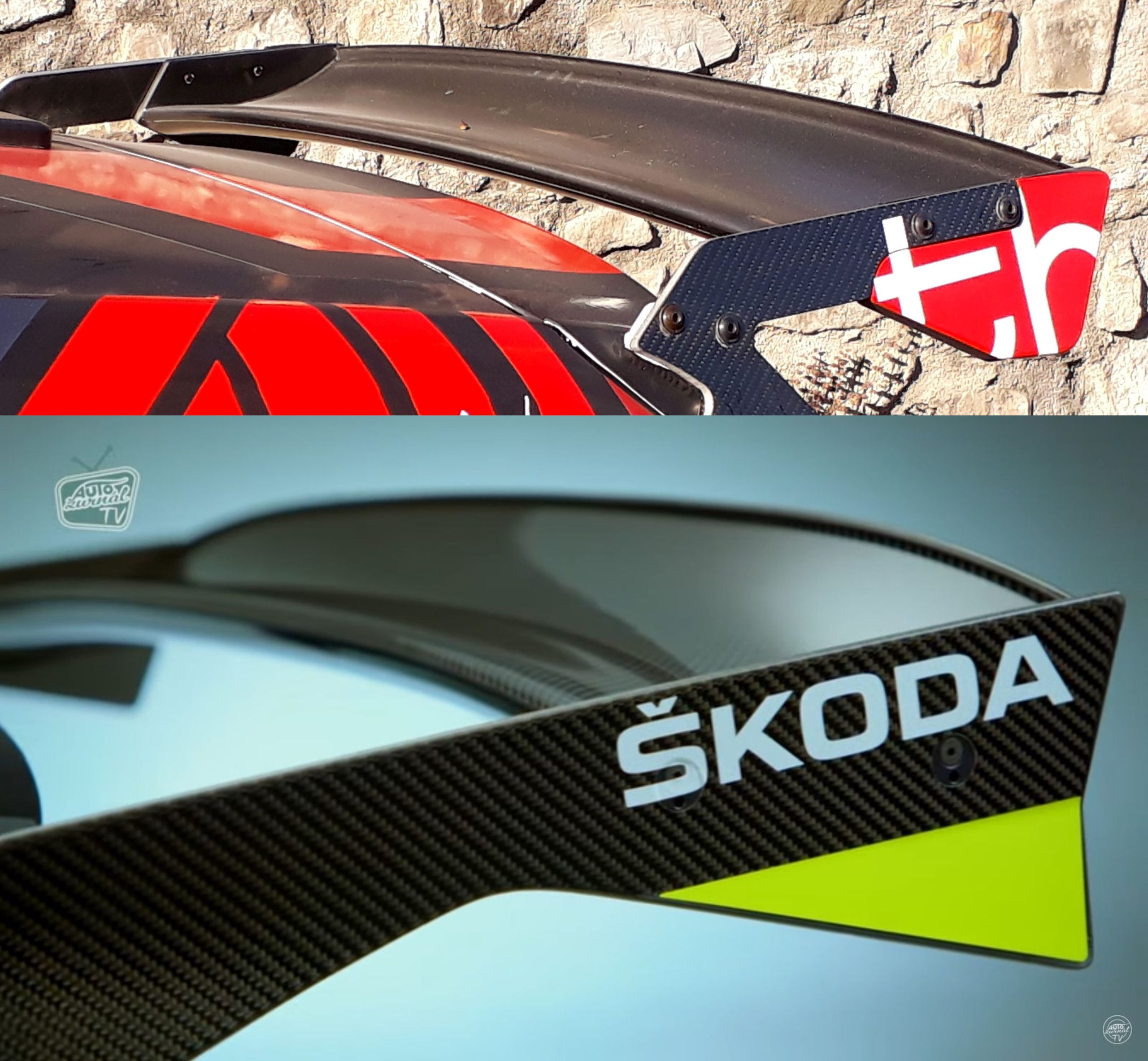 The new wing is similar to that used in the VW Polo GTI Rally2. The main difference is in the wing profile, which seems to have more camber to the rear (more angle), thus increasing the area of the wing facing the air. Again, it helps generate more downforce, but at the cost of higher drag.

The image above confirms that the new Fabia RS Rally2 rear wing has a higher front area on the center part, as the top of the wing (included the Gurney flap) protrudes from the endplates, while this does not happen with the other wings reviewed above.

There’s another element that possibly contributes to the increase in efficiency of the rear wing: the new roof scoop, which has been significantly modified. The new design consists of a narrower (but higher) roof scoop, in comparison with the wider and lower scoop of the previous model, as shown in the image above. 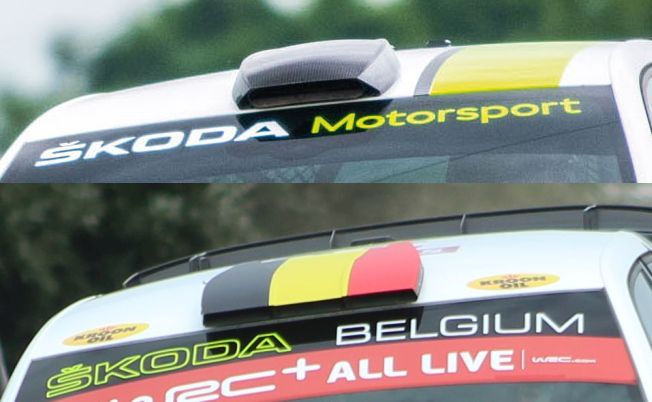 The air flowing over the roof finds now a narrower obstacle, and its rounded shape contributes to minimizing its impact over the flow, even though it is more prominent, as the CFD image extracted from the Škoda video on aerodynamics confirms.

The result is that the airflow reaching the rear wing is less affected by the presence of the roof scoop, and the wing becomes more effective in downforce generation.

Also, the new roof possibly contributes to reducing drag: with a similar front area to the previous design, its contribution to the shape drag (the drag generated by the shapes of the bodies) is surely smaller, due to its rounded shape. 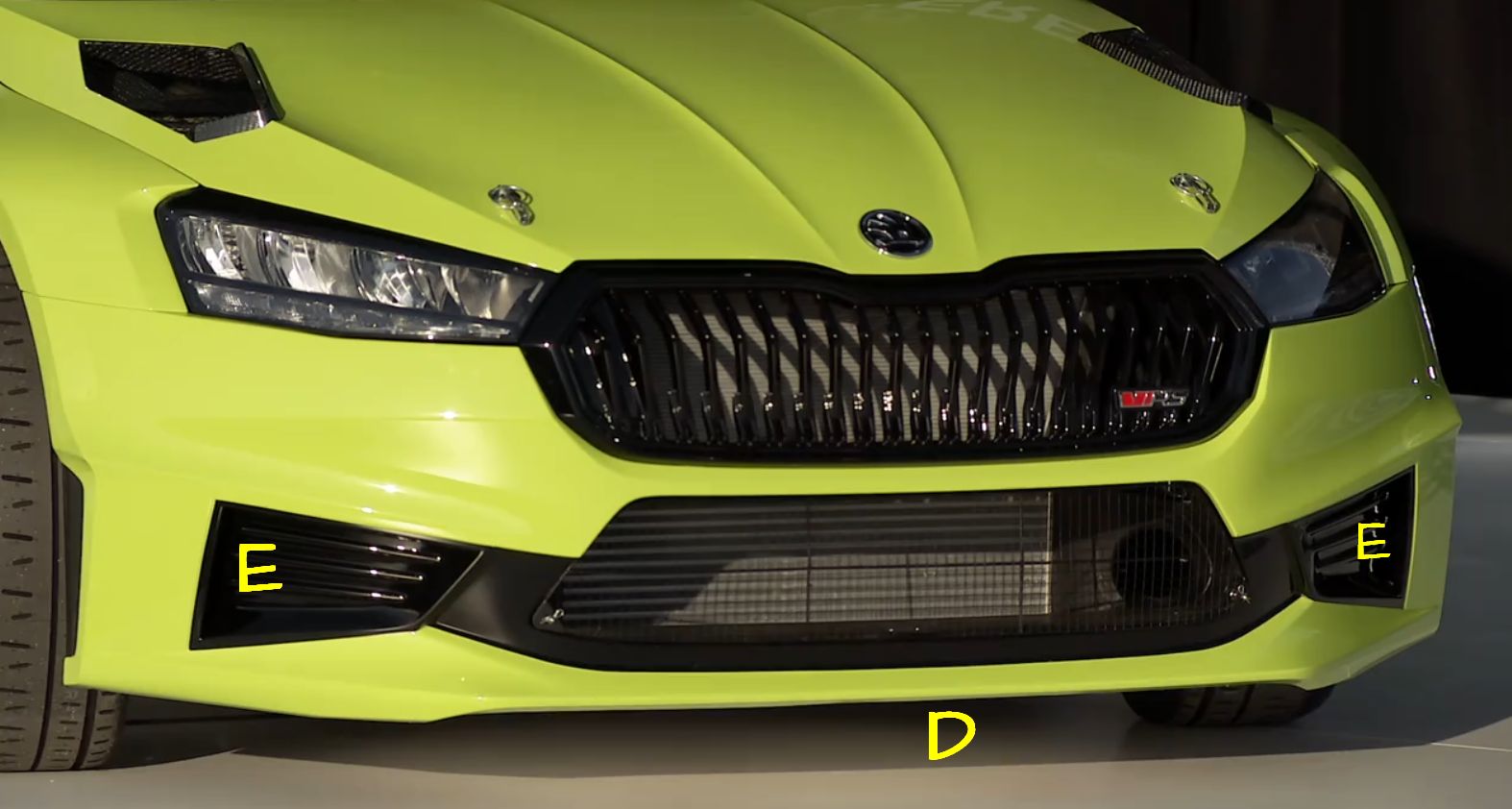 What about under the car? Reducing the pressure under the car comes by minimizing the amount of air that enters under the car, as it can flow faster. The new Fabia includes the usual aero parts designed to stop air from entering under the car, such as the prominent front splitter (D), the side skirts, as well as the flat undercar that ensures a fast airflow under the car. 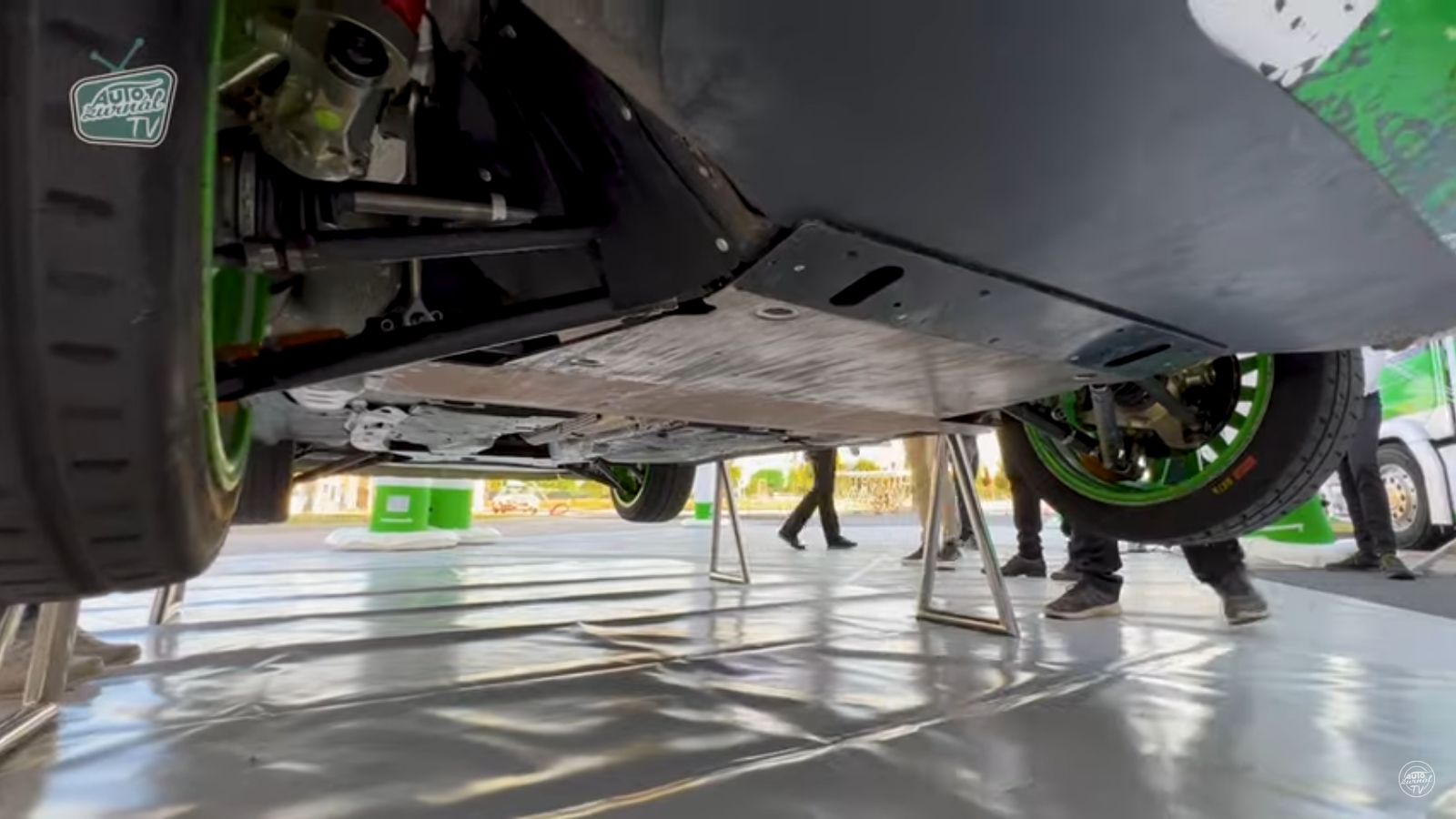 But in the new model, a solution already present in the previous models has been optimized: the air curtains.

The goal of air curtains is to get some air at the front of the car and spread it ahead of the front wheels, through the orifices (E) present on both sides of the front bumper. The role of this airstream is double: on one side, air flowing in parallel to the front wheel acts as a barrier with respect to the main airflow flowing alongside the car, which now does not interact with the wheels. The result is that less energy is lost from this reduced interaction, which translates into reduced drag. 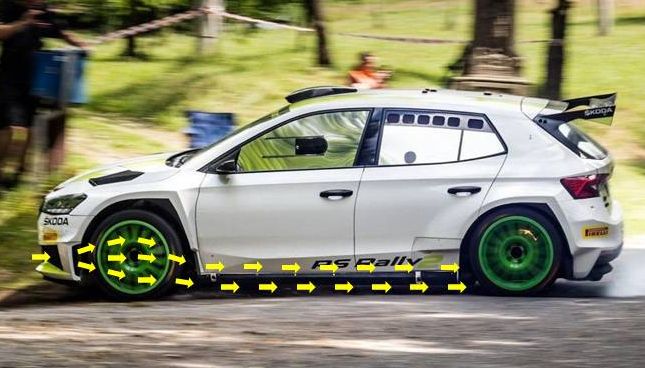 On the other side, the airflow leaving the front wheel keeps flowing in parallel to the car, acting again as a barrier: it prevents air from the man flow to enter under the car. The result is that air flowing under the car remains undisturbed, thus pressure does not increase, and more downforce can be obtained.

This solution was already implemented in the previous versions of the car, as the above images confirm. The difference is that now there is a dedicated inlet on both sides of the front bumper for this purpose, while in the previous models, the air curtain was generated with the excedent of air initially sent to brake cooling.

It is important to note that air curtains, which have become very common in road cars, are accepted in Rally2 cars but not in Rally1 cars. Current regulations (Appendix J – Art. 262 – Specific regulations for Rally1 cars) forbid them through the statement “Deliberate through-flow of air not permitted except for cooling” included in the art. 902. 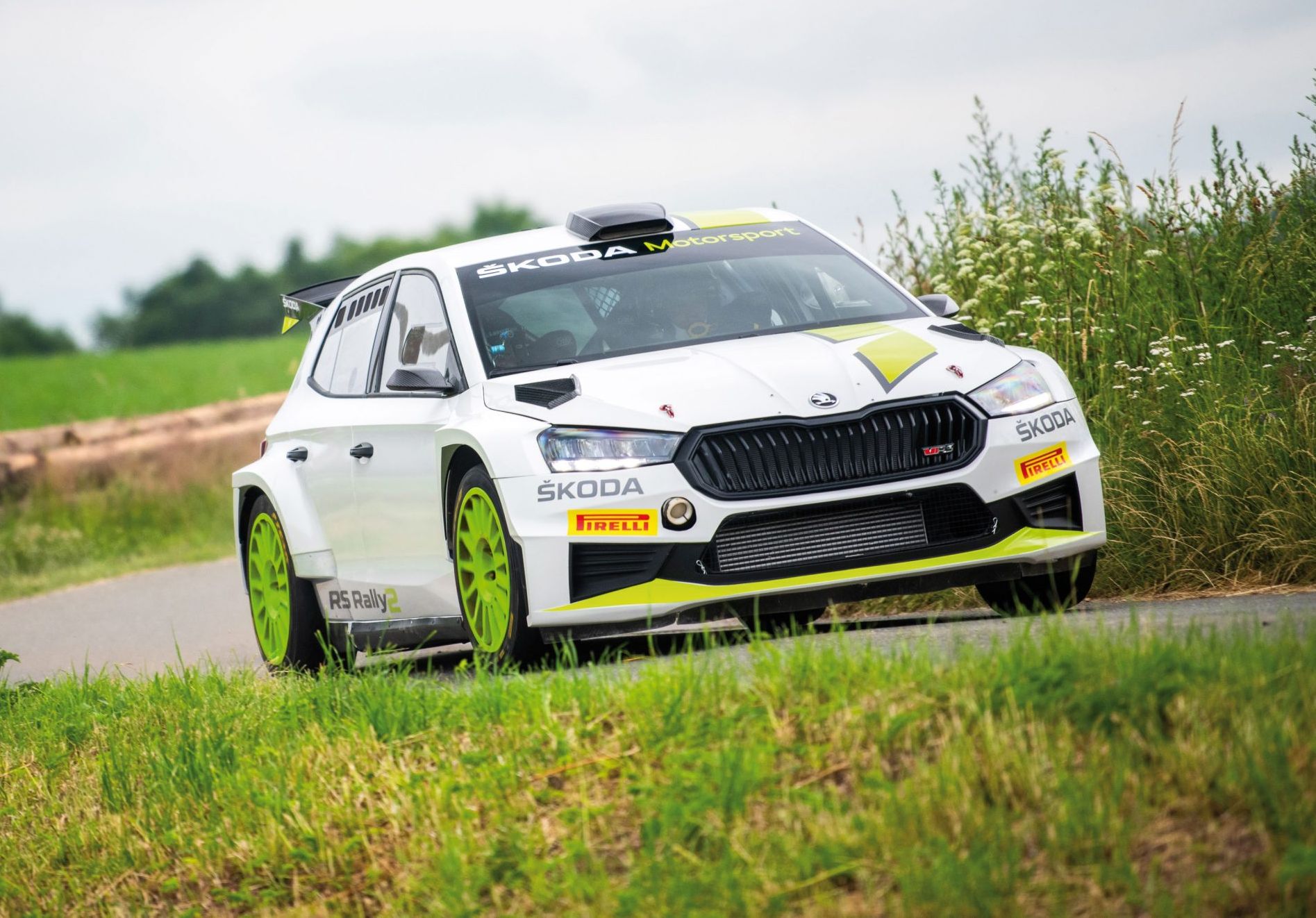 In our opinion, these are the key features behind the great achievements reported by Škoda on the aerodynamics of the new Fabia RS Rally2. Whether all these contributions result in the figures reported is difficult to quantify, but it seems certain (qualitatively) that the new solutions will significantly contribute to increasing the downforce generated by the car, while the excellent drag inherited from the road model has not been significantly increased with the new aero parts.