The Rally Estonia pre-event tests held in the last days of June were selected by Toyota for testing the performance of the first main aero modification in the GR Yaris Rally1 since it was presented back in January. With two fast gravel events (Estonia and Finland) and the tarmac stages of Ypres ahead, it made sense that they tried to set up the cars with the latest innovations. But, as always, the modifications need to be carefully evaluated before being implemented, and this is what they have been doing in the last two weeks.

The modifications tested in Estonia (and later at its home test site in Finland) affected both ends of the rear wing. The new design will be in use from Estonia next weekend, as Toyota Technical Manager Tom Fowler recently confirmed to Dirtfish.

A look at the detail of the new wing is really helpful to understand the modifications at both ends and their purpose.

The modification affects the endplates, the external portion of the lower plate and the external wing supports:

(1) the endplate has been truncated approximately at the center, and the lower part has been converted into a side winglet,

(2) the external wing supports have been enlarged by its rear part, in replacement of the truncated endplate, and

(3) the external parts of the lower plate have been lowered, with respect to the central plate, and the Gurney flap removed. 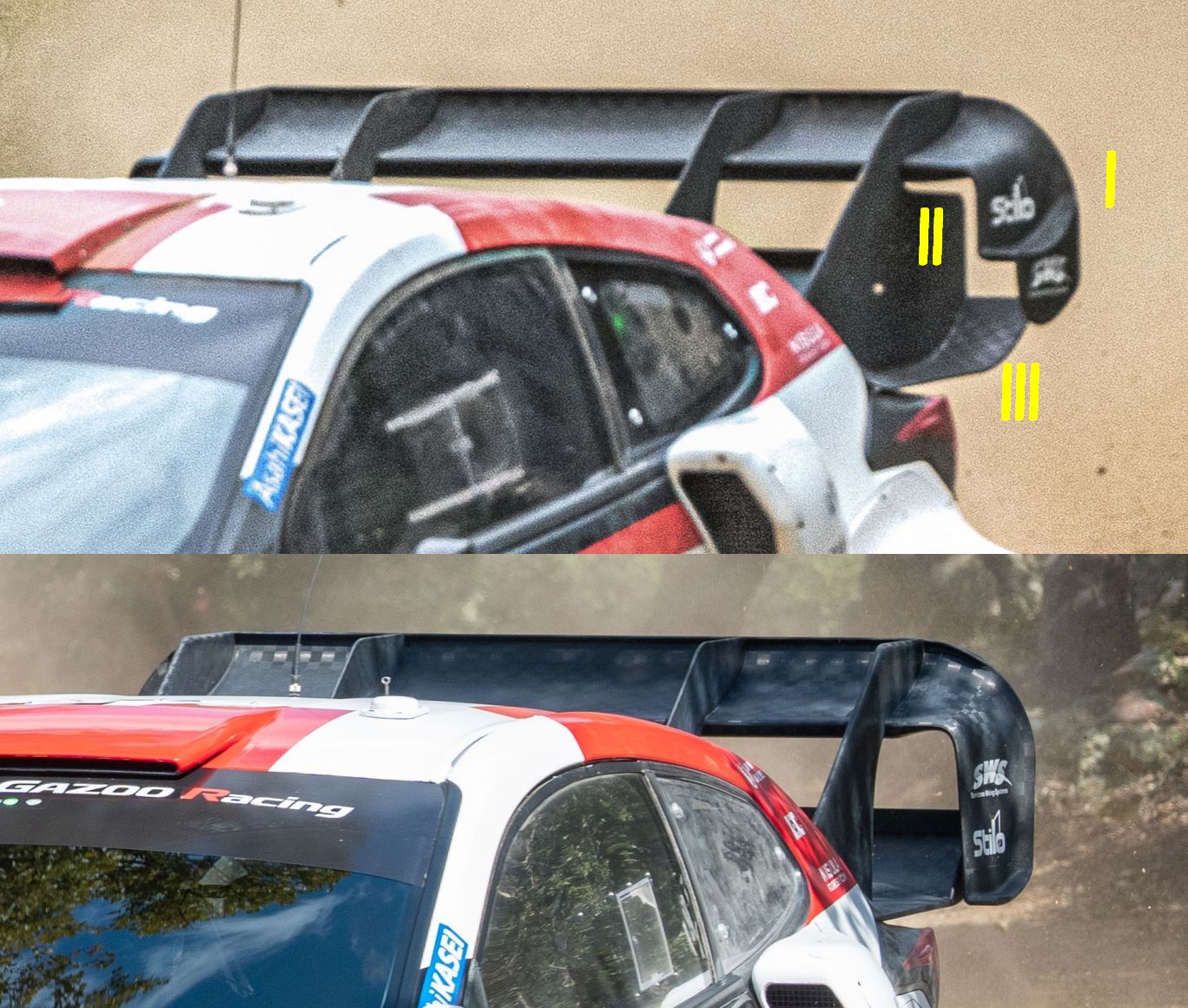 It is important to point out that the airflow alongside the GR Yaris Rally1 is affected by the presence of the side scoop. Thus, the new winglet takes advantage of the air coming from the upper part of the scoop, while in the original design the lower part of the endplate was hindered by the scoop, as shown in the image below (right image).

The images seem to confirm that the angle of attack of the lower plate has not been changed, including the outer extensions.

The reason behind the modifications is multiple. On one hand, by lowering the lower plate extensions and truncating the endplates, air finds a wider space to flow and they can make better use of air coming out of the side scoop. This surely means that air resistance (drag) has been reduced, and the lower plate extension can generate more downforce.

On the other hand, converting the endplate into an external winglet also brings some extra downforce by using the air flowing over the side scoop, such as the rear wings of their competitors already do.

Finally, the prolongation of the external supports to the rear allows to obtain more downforce when the car is sideways, as they act as real endplates, in substitution of the original parts, now truncated. 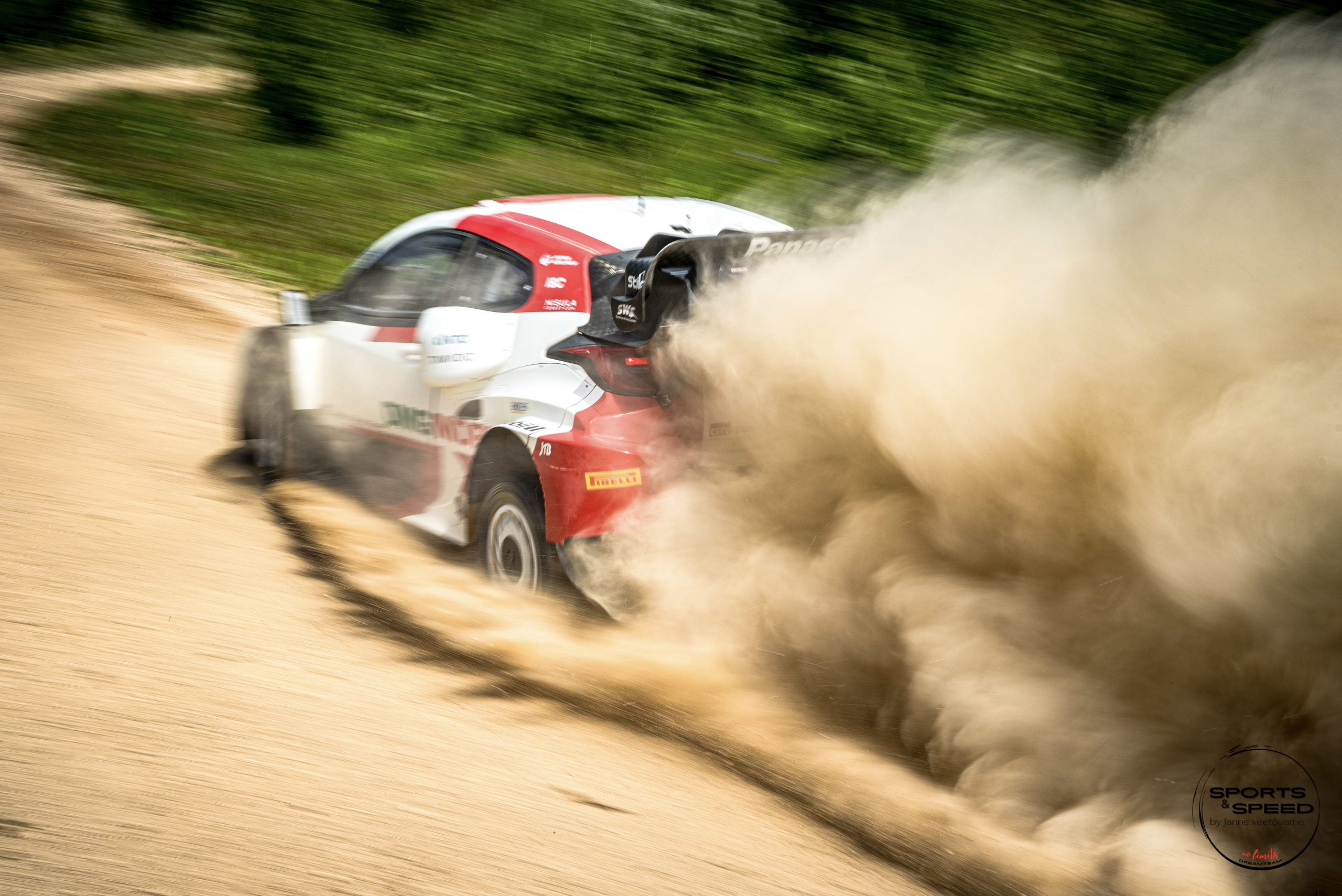 The extended support also acts as a barrier, separating air flowing through the new space created on both sides of the wing from the air flowing below the wing, as shown in the image above. The result is that air under the wing is not affected, and the central part of the wing is more effective.

In his interview with DirtFish, Tom Fowler defined the modifications as follows: “it’s just a little bit of a re-adjustment on aero balance with the rear wing”. And effectively, this is what they have done: re-adjustment of the side ends of the rear wing to allow better airflow, while the central part becomes more effective, leading to more downforce and less drag. That is to say, the ideal that every engineer pursues behind every aero modification. The design looks very good, we can only wait for the performance on real rally stages.