The 2022 edition of Rally Estonia saw the debut of an upgraded aero package for the Fiesta Rally2. This is the first aero modification introduced to the model born in June 2019. The upgrade consists of an updated rear wing and new wing mirrors. Here’s our review, as well as a benchmark with the other competitor’s rear wings. 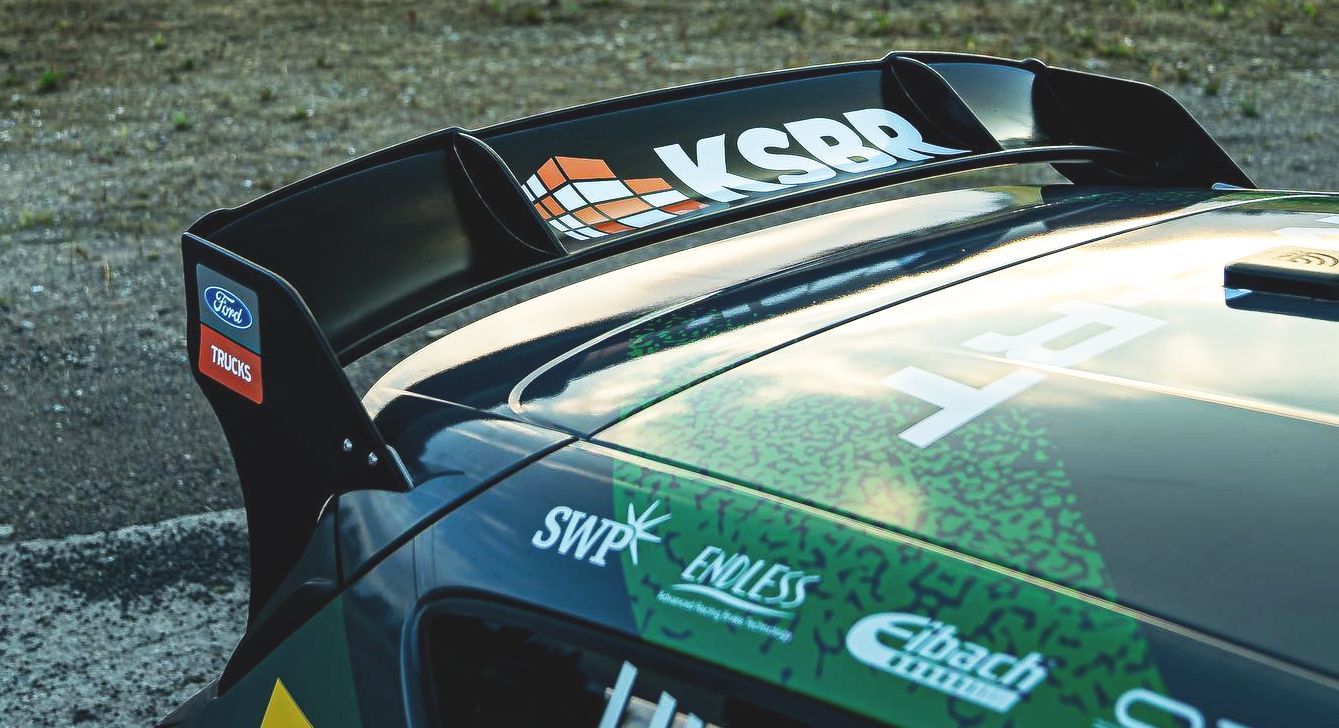 The new rear wing presents significant modifications with respect to the previous design:

1) the angle of attack of the new wing is higher,

2) endplates have been enlarged, and now act as wing supports, connected with the rear of the car, thus allowing the removal of the supports originally placed under the wing,

3) two vertical fins have been added on top of the wing. 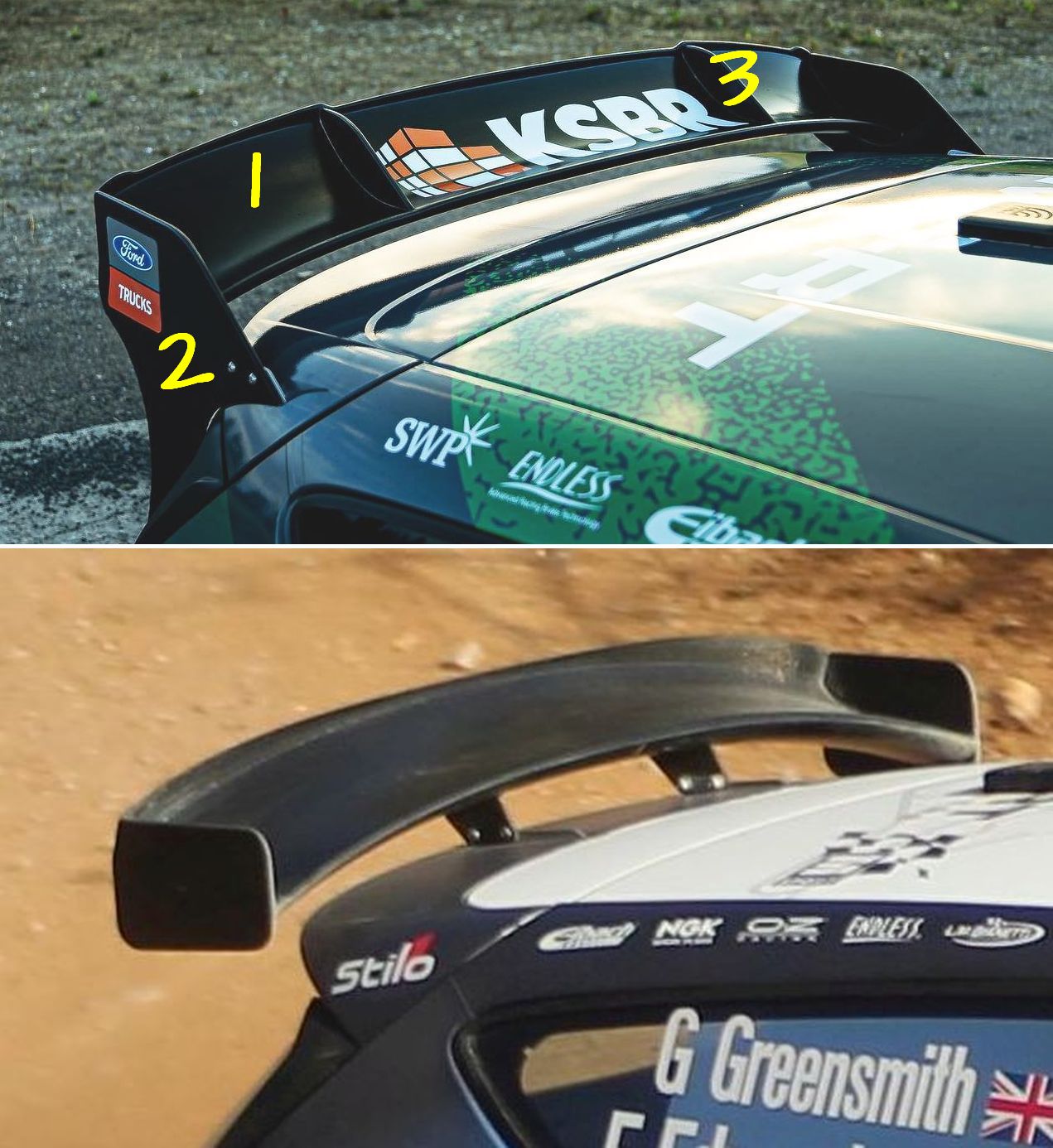 The bigger endplates (2) are more effective in preventing mixing of the air from above and below the wing. The result is that air speed difference between the two locations is higher than with smaller endplates (as they allow higher mixing), and the wing becomes more effective in downforce generation. Also, with the endplates supporting the wing, the center supports are no longer required. The airflow under the wing is now cleaner and faster, thus with lower pressure, which again results in higher wing efficiency.

The introduction of two vertical fins (3) over the wing, combined with the bigger endplates allows the car to take advantage of air force while the car is sideways. The impact of air over these surfaces results in pressure over the wing, which brings some extra downforce. But again, the presence of these two elements in the path of airflow generates some resistance (drag). 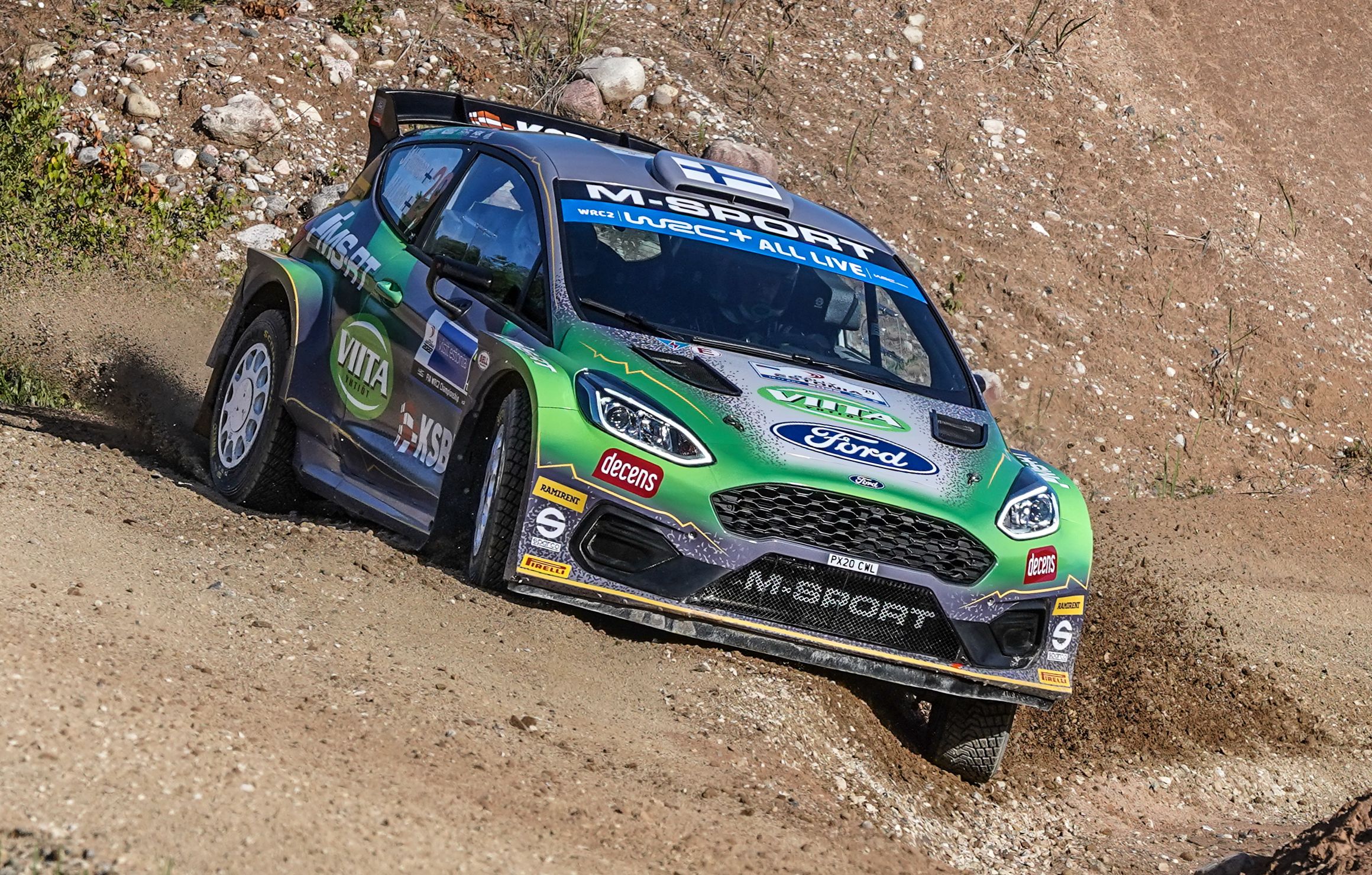 In summary, the new wing increases the capacity of the car to generate rear downforce, thus increasing rear grip (reducing oversteering) but at the cost of some small added drag, which might result in a small reduction in the top speed of the car.

After this modification, the latest evolutions of the Rally2 rear wings present two main trends, as shown in the image below: those with endplates replacing the central supports (Ford, VW and Škoda) against those using centered swan neck supports (Hyundai and Citroën) and smaller endplates. Also, the vertical fins that Škoda has recently removed from the Fabia RS wing, are now present in the new Fiesta rear wing. Which clearly shows that no solution is optimal.

The second modification introduced in the upgraded package of the Fiesta Rally is the new wing mirror. 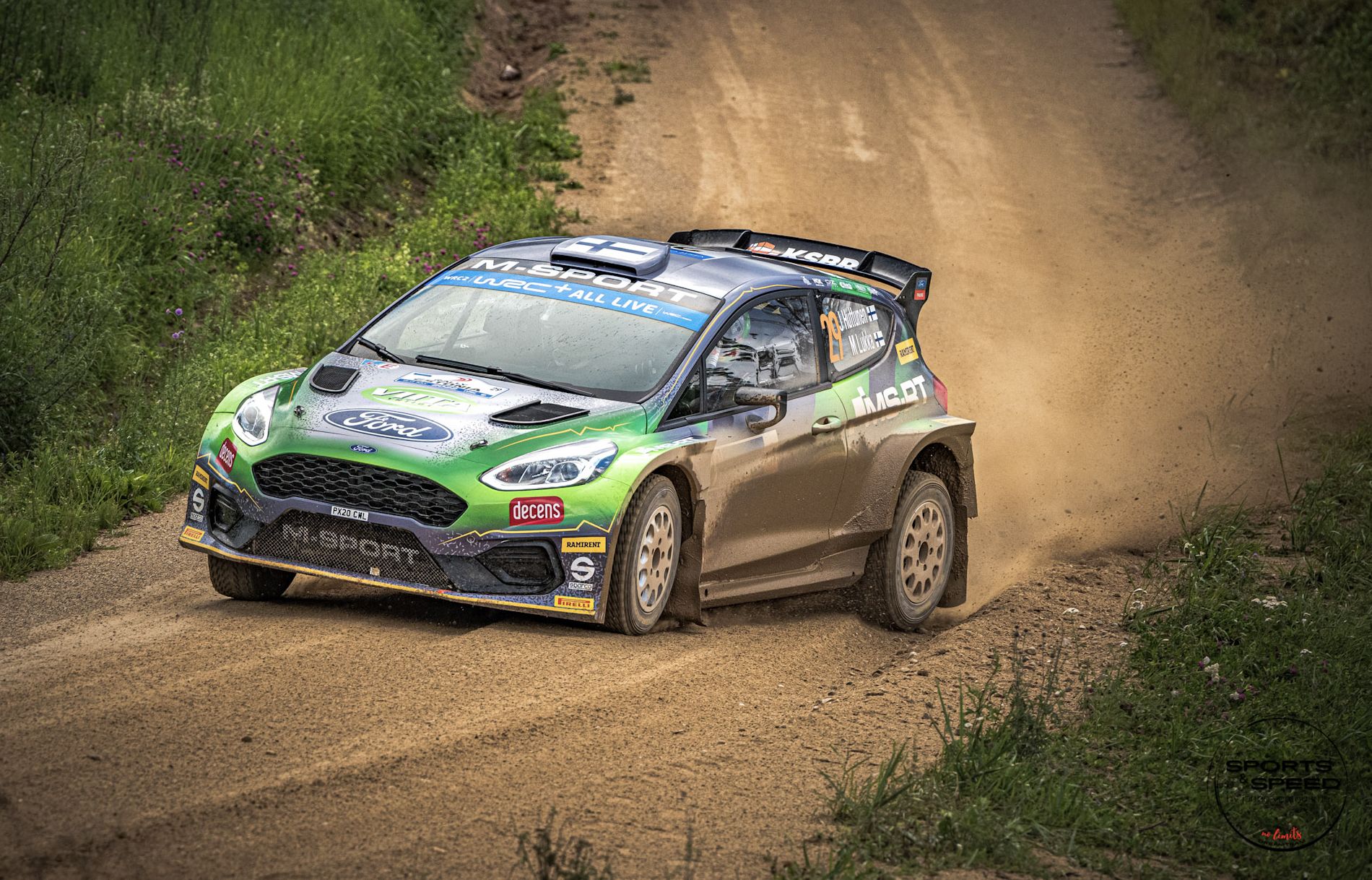 The design of the new wing mirror is very similar to that of the wing mirrors introduced in the Ford Fiesta WRC in 2019, as shown in the image below.

The purpose was the same in both cases: to reduce air resistance (drag) in that part of the car by reducing the impact of the wing mirror on the air flowing alongside the car, thanks to new support designed to leave air an open space to flow between the mirror and the car’s body. In the case of the Fiesta WRC, the purpose was also to send a cleaner airflow towards the rear side wings, but this is not the case with the Fiesta Rally2, as the rear wing has no side wings.

All the aero modifications of the Fiesta Rally2 have been done with the support of Ford Performance, which most probably includes numerical simulation (CFD) and wind tunnel testing, at the Ford Performance (Windshear) facilities located in Concord, near Charlotte, NC (USA).

Other modifications also introduced by MSport in the Fiesta Rally2 for Estonia involved the rear suspension geometry and software updates (affecting the data logger and the driver display).

The car’s debut took place in Estonia, with Jari Huttunen and Mikko Lukka at the wheel, while no official FFiesta Rally2 has been entered into the next event (Rally Finland) entry list. But the first customer unit has already been delivered, to McGeehan Motorsport for British driver David Bogie. 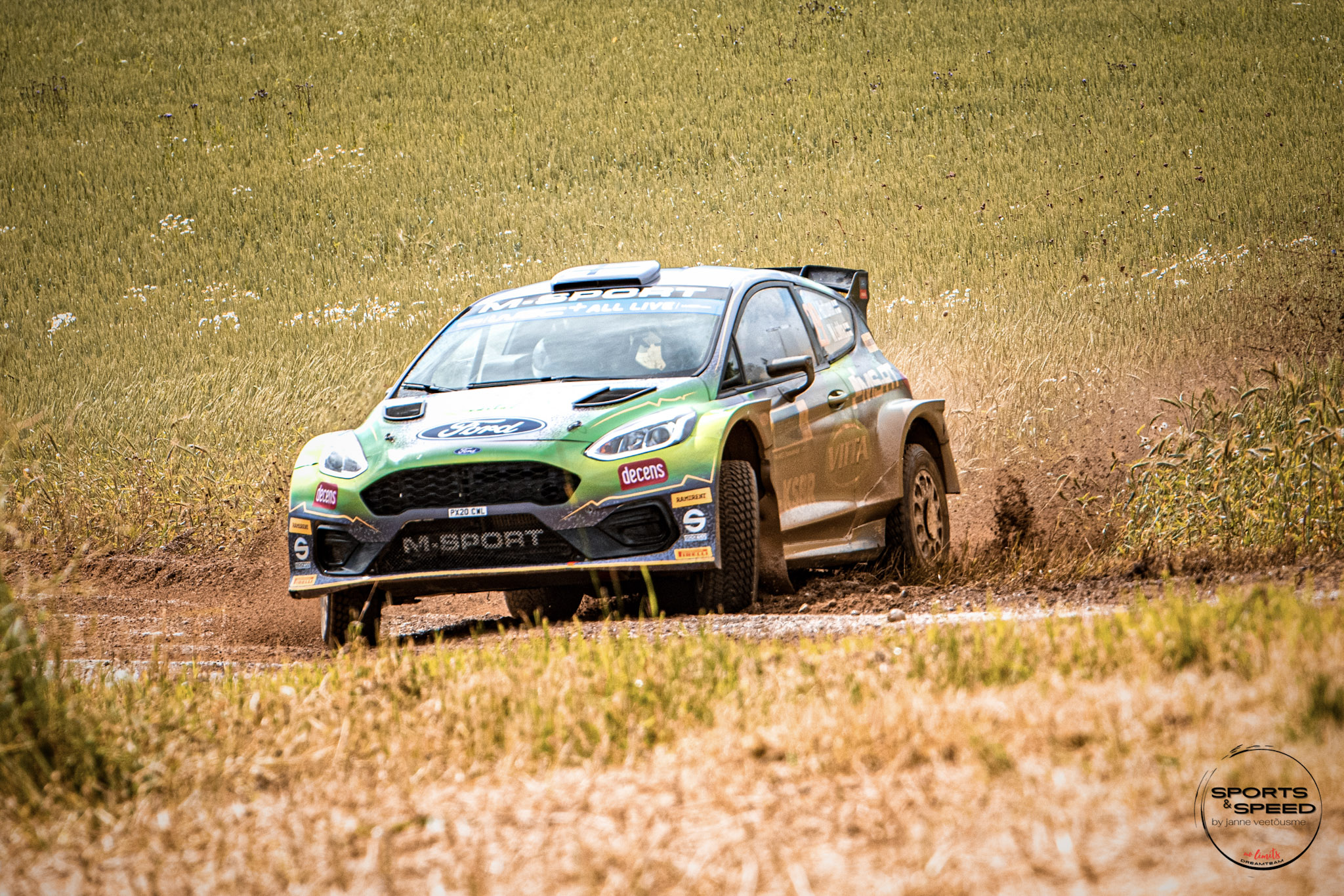 2 thoughts on “Upgraded aero package for the Ford Fiesta Rally2”