In the last weeks, different media, such as Autosport (Tom Howard) or Rallit.fi (Aki Hietavala) have published images of the last evolution of the Toyota GR Yaris WRC 2021 prototype, which is on display at the team’s new WRC factory in Finland. Based on the last version of the GR Yaris road model, which was launched to the market in 2020, the car is the result of the development program held in 2019 and 2020, with tests in Finland and Spain. 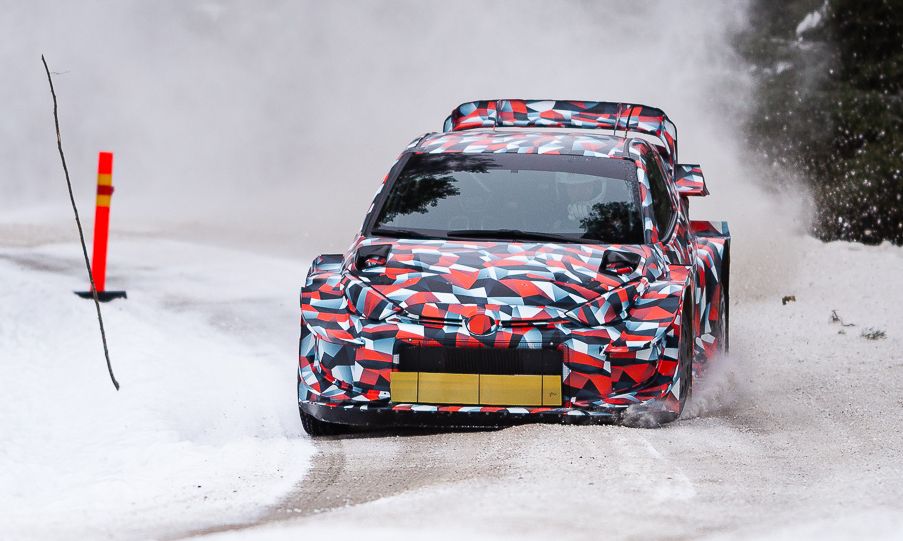 The initial plan was to introduce it into competition in 2021, but the pandemic situation changed it all. The program was suddenly interrupted, for what the car displayed at the team’s new WRC factory still combines some aero parts from the previous model (such as the rear wing) with some new aero solutions that are worth reviewing. 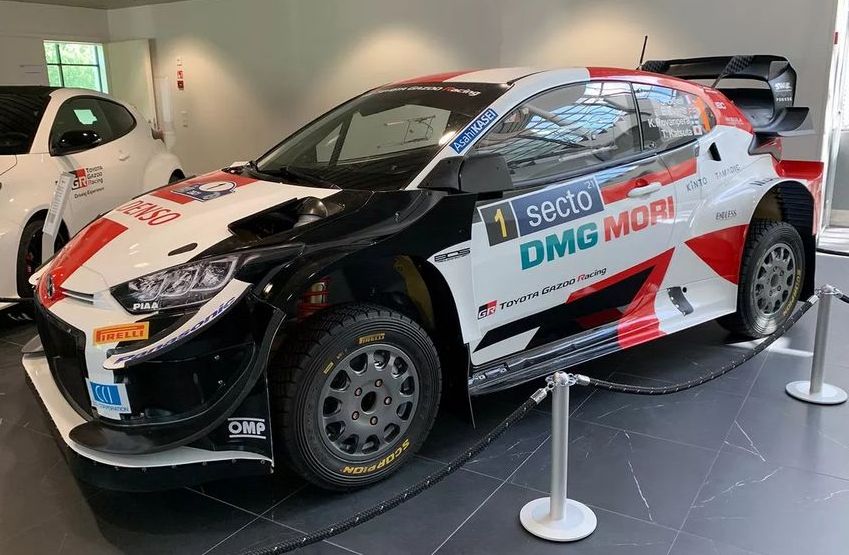 The first big modification of the GR Yaris WRC prototype was the front bumper, with a rounded shape on both ends, while the traditional side fences were removed. The new design allows for more free airflow, thus reducing air resistance (drag). Also, the absence of the fence means that air can flow towards the sides of the car, at a higher speed, reducing the pressure in this area, which means that the front splitter generates less downforce, although it is compensated by the lower dive plane, which is now more effective in generating more downforce, as the pressure under it has been reduced. Most probably, the total downforce at this point generated remains the same, while drag is reduced.

The second modification on the front bumper affected the size of the dive planes, as shown in the images below. The upper plane is now wider, due to the different (thinner) front shape of the Yaris, allowing it to have a bigger surface while the total width of the car has not changed. 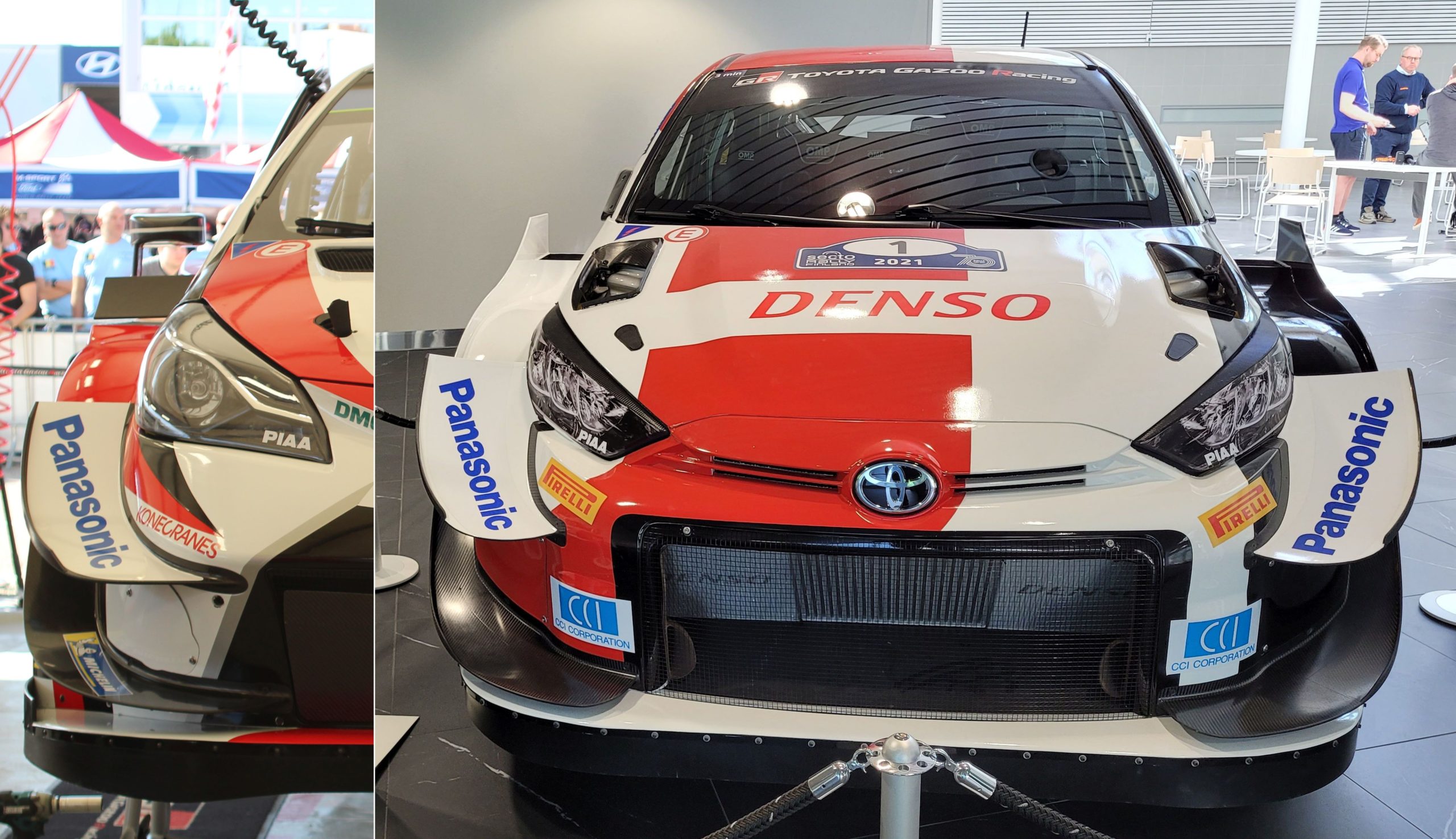 Toyota GR Yaris WRC 2021 front view and side detail of the dive planes of the Toyota Yaris WRC 2019 – image by Aki Hietavala (Rallit.fi) and @llluis555

The lower dive plane is more prominent now, which means it has also a bigger surface. The area increase means, in all two cases, that more air can impact over them, thus generating more front downforce, as more air impacts over it.

Also, it is worth noting the presence of a small side lip on the external part of the lower dive planes. The lip contributes to generating a bigger row of vortices towards the rear of the car, which acts as a barrier, reducing the amount of air that can enter under the car, thus reducing the pressure and increasing downforce all under the car. 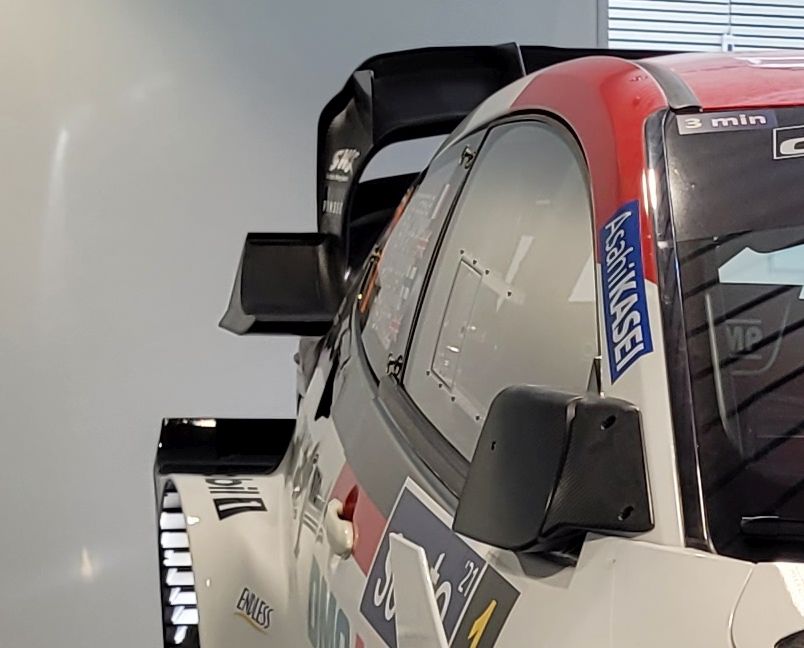 The car incorporated a new design of the side mirrors, with a very small front area for a significant improvement in drag, as well as a reduced impact of the air flowing alongside the car, making the side wing of the rear more effective. 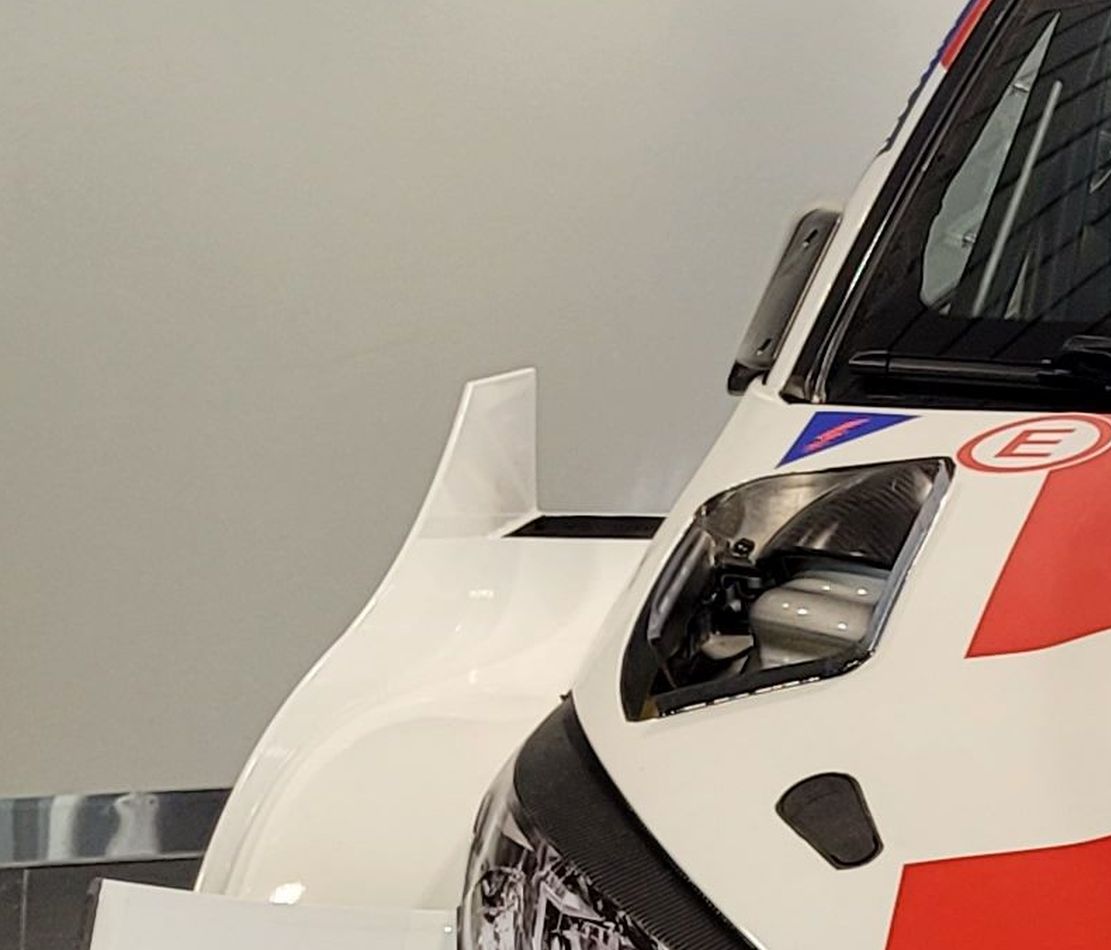 Detail of the top of the front fender of the 2021 Toyota GR Yaris WRC – image by Aki Hietavala (Rallit.fi)

The last modification at the front of the car consists of the increase in the size of the side lip on top of the front fender, while the small deflector located in this position in the previous car version has disappeared. The new design allows better channel air towards the rear wing, making it more effective in generating rear downforce, while the removal of the wing on top of the fender would have reduced the front downforce. In summary, with this design, the aero balance of the car would have been modified, with more load at the rear and less at the front.

The removal of the wing on top of the front fender allows for drag reduction, due to the reduced front area. But now the depression behind the wing that allowed a better removal of air from the engine bay through the upper vent has disappeared, forcing more air to flow through the rear, vertical vent. This is the reason why the rear vent is now larger (longer). 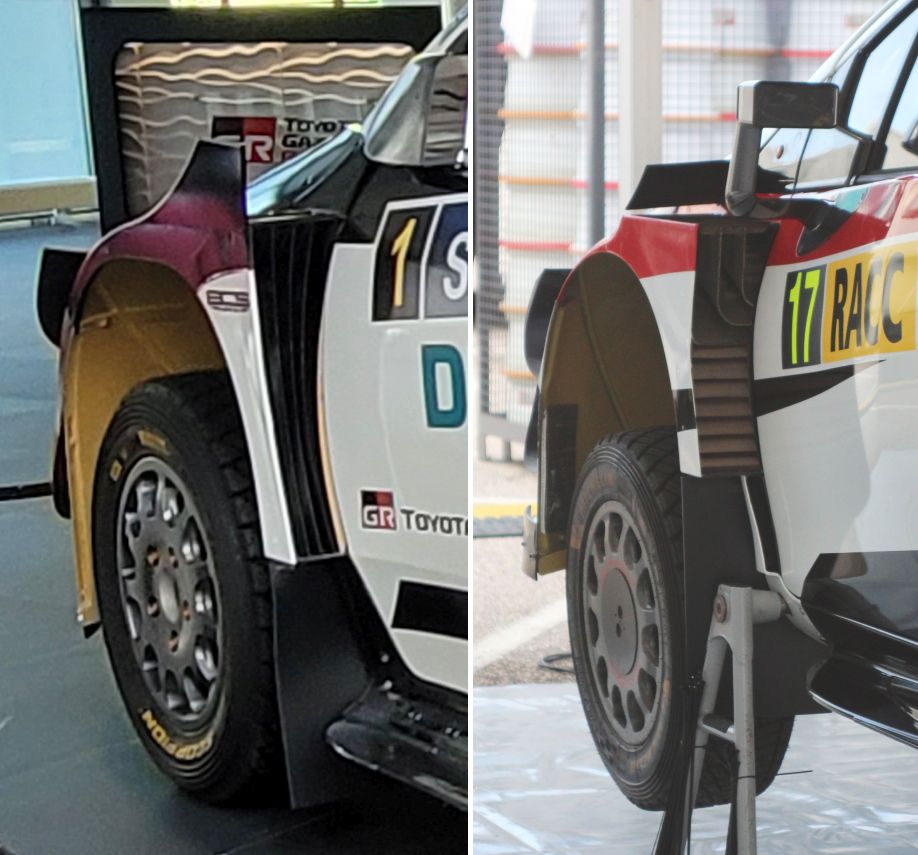 The design of the front fender rear vent has also changed, with vertical strakes instead of the traditional horizontal strakes, forcing air to travel alongside the car, in a more ordered structure, which possibly has a small benefit in terms of drag. The image above also shows how the side skirts have been prolonged to the rear of the front wheels, while in the previous car, the skirts started some centimeters behind, with a round shape that now has disappeared. The longer the skirts the more effective in their barrier effect, for what the new design is more effective in preserving downforce under the car. 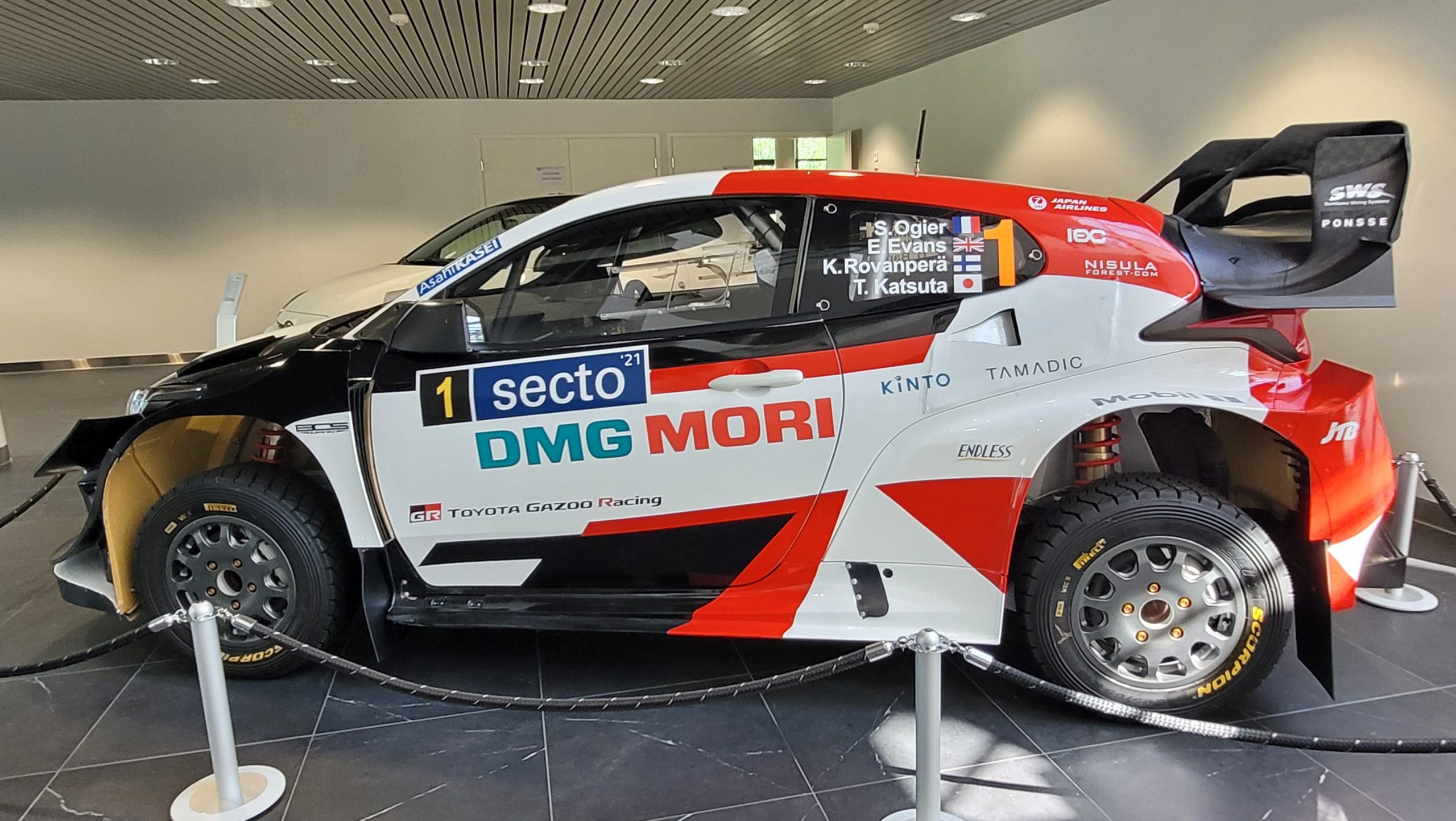 Another important modification observed in the 2021 Toyota GR Yaris WRC is the adoption of a NACA duct intake for rear brake cooling. While in the previous WRC car the intake was located ahead of the rear wheels, the new location better preserves it from dust, mud and stones. But due to its rear location, it is required a 90º pipe to send air down to the brake disks, which would have surely caused a significant pressure drop, thus reducing air cooling capacity.

The side view of the car shows how Toyota was already working on a very big separation between the wheel and the arch. With so big fender vents, that separation was not going to be significant in 2021, But with the fender vents trimmed for 2022, working with such a gap would become critical to remove air from under the car. 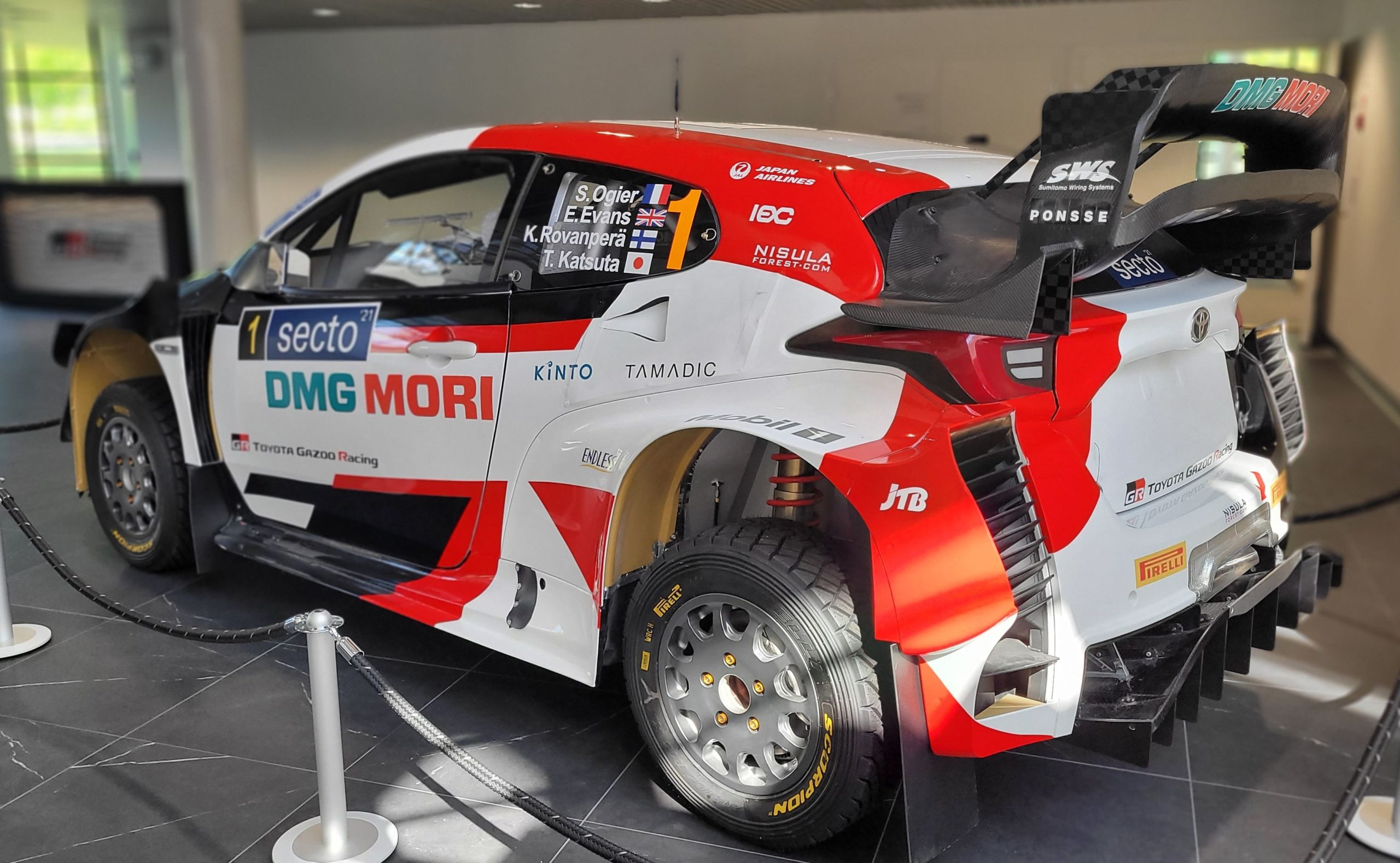 Two important modifications can be observed at the rear of the car. On one side, the rear fender has been modified: while it has been adapted to the external shape of the car, the upper surface makes now a more steep ending, while the lower part of the rear vent leaves more space for air to exit, with a bigger separation between the lower strakes, which remain horizontal (in opposition to the front vent). 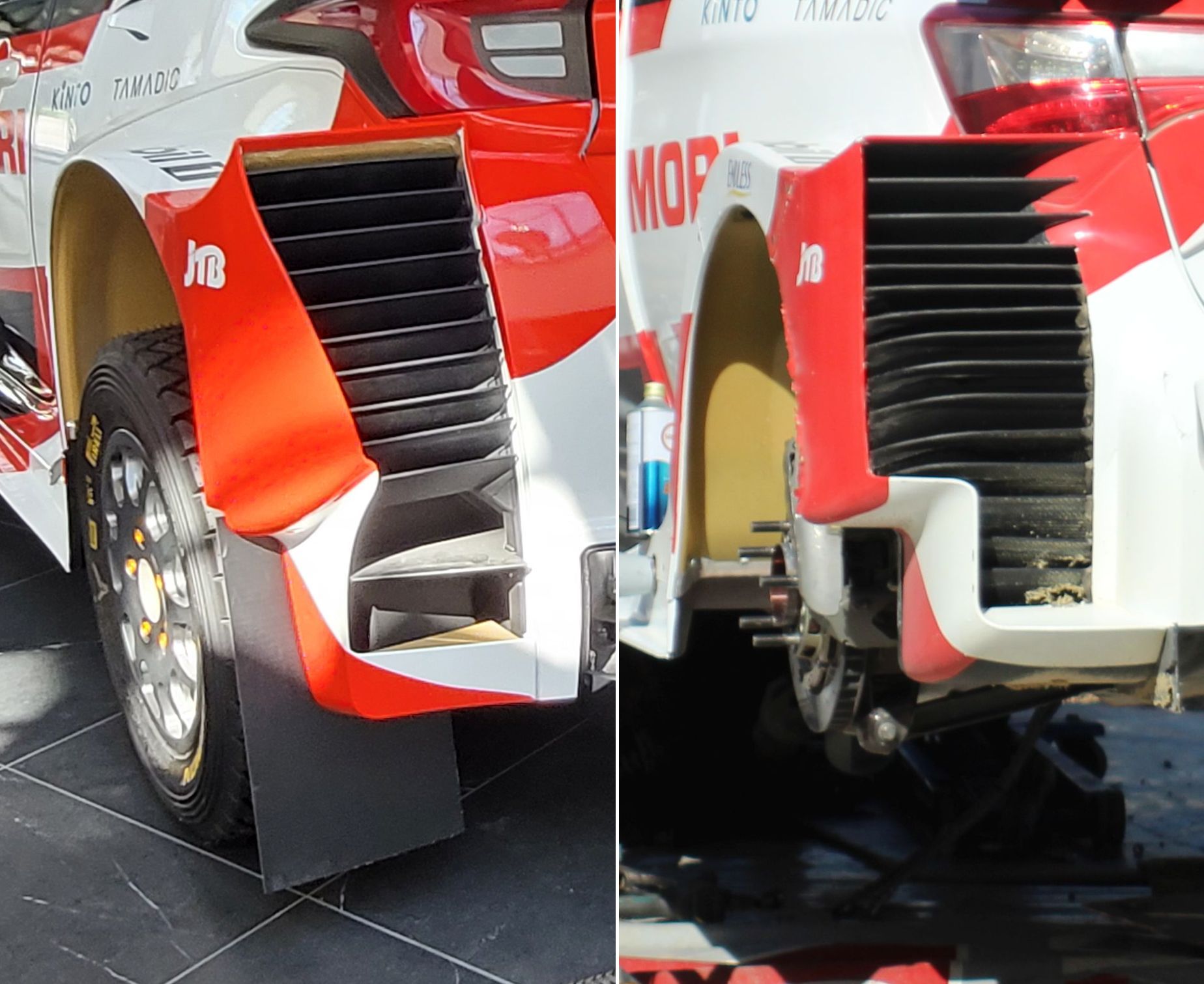 On the other side, the new rear diffuser. The engineers have taken advantage of the different shape of the GR Yaris rear end to install a new diffuser with smoother lines and a higher number of vertical strakes. 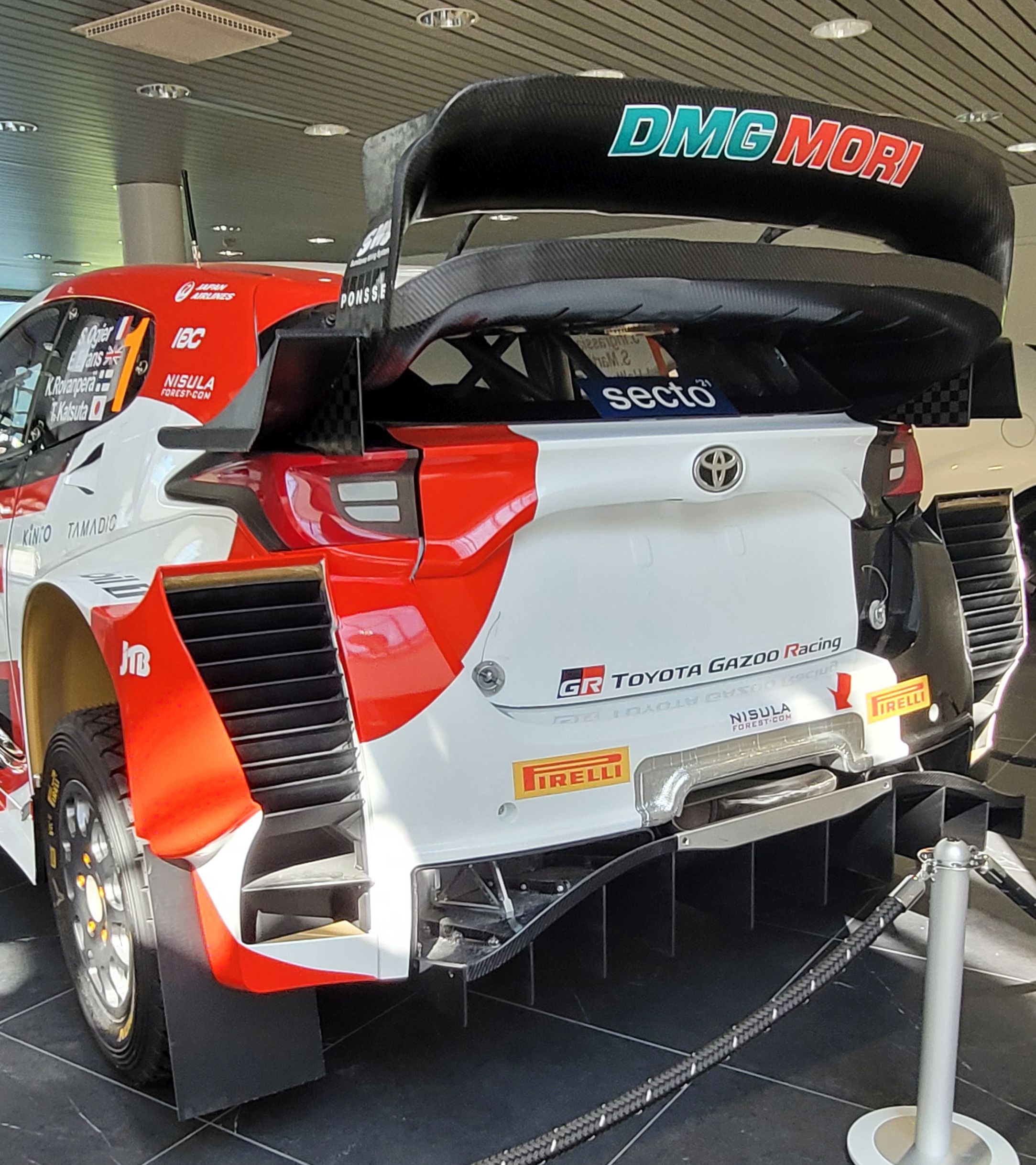 The smoother lines and the increased number of strakes (from 4 to 8) allow air to flow smoother and more ordered, with fewer energy losses. The result is higher airflow speed, leading to lower pressure under the car, thus more grip. 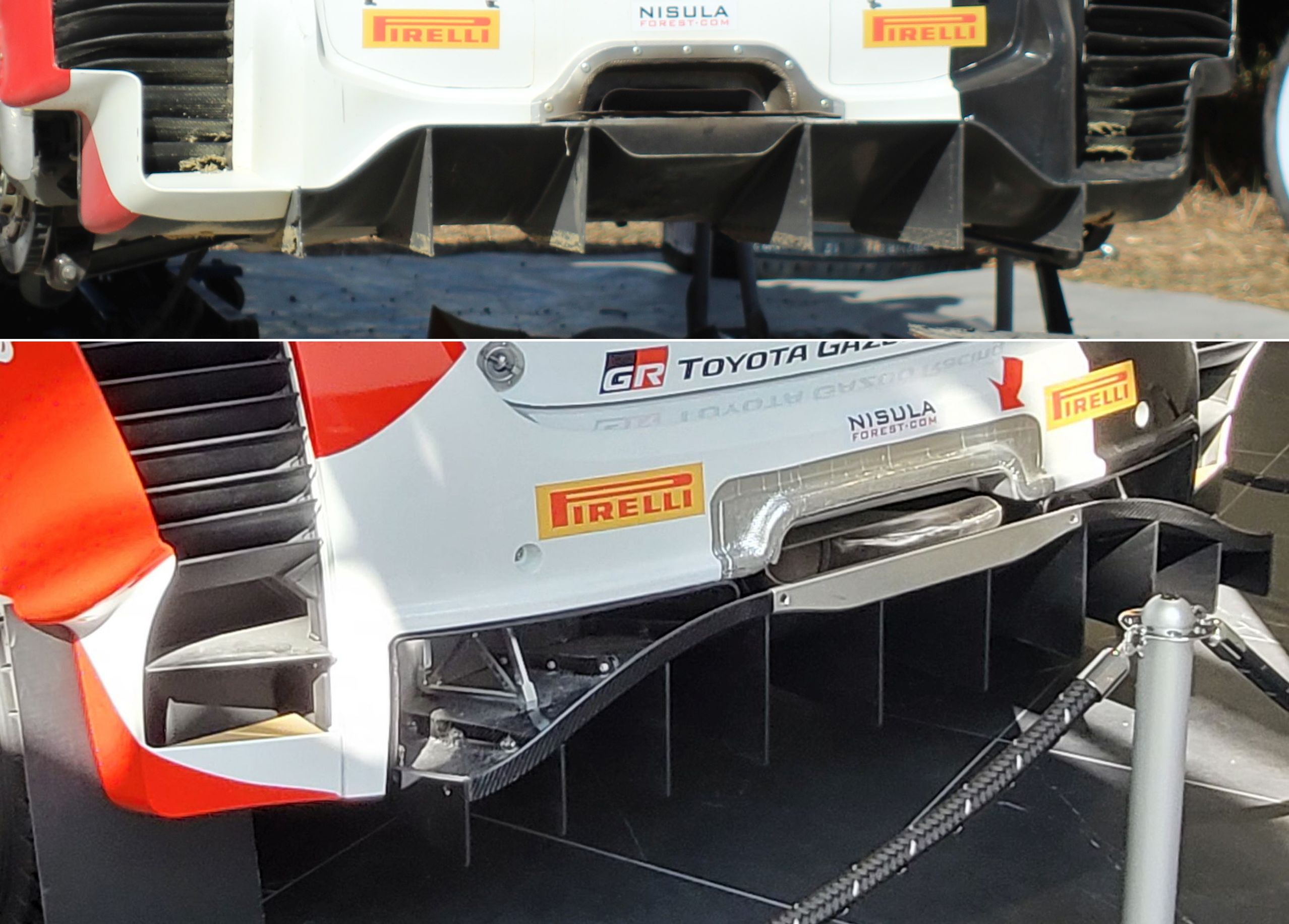 Most of these modifications could be identified in the images from 2020 tests, such as the image below, from the test in Spain. The last part to be introduced in the car was the rear diffuser, which was not visible until July 2020 tests. 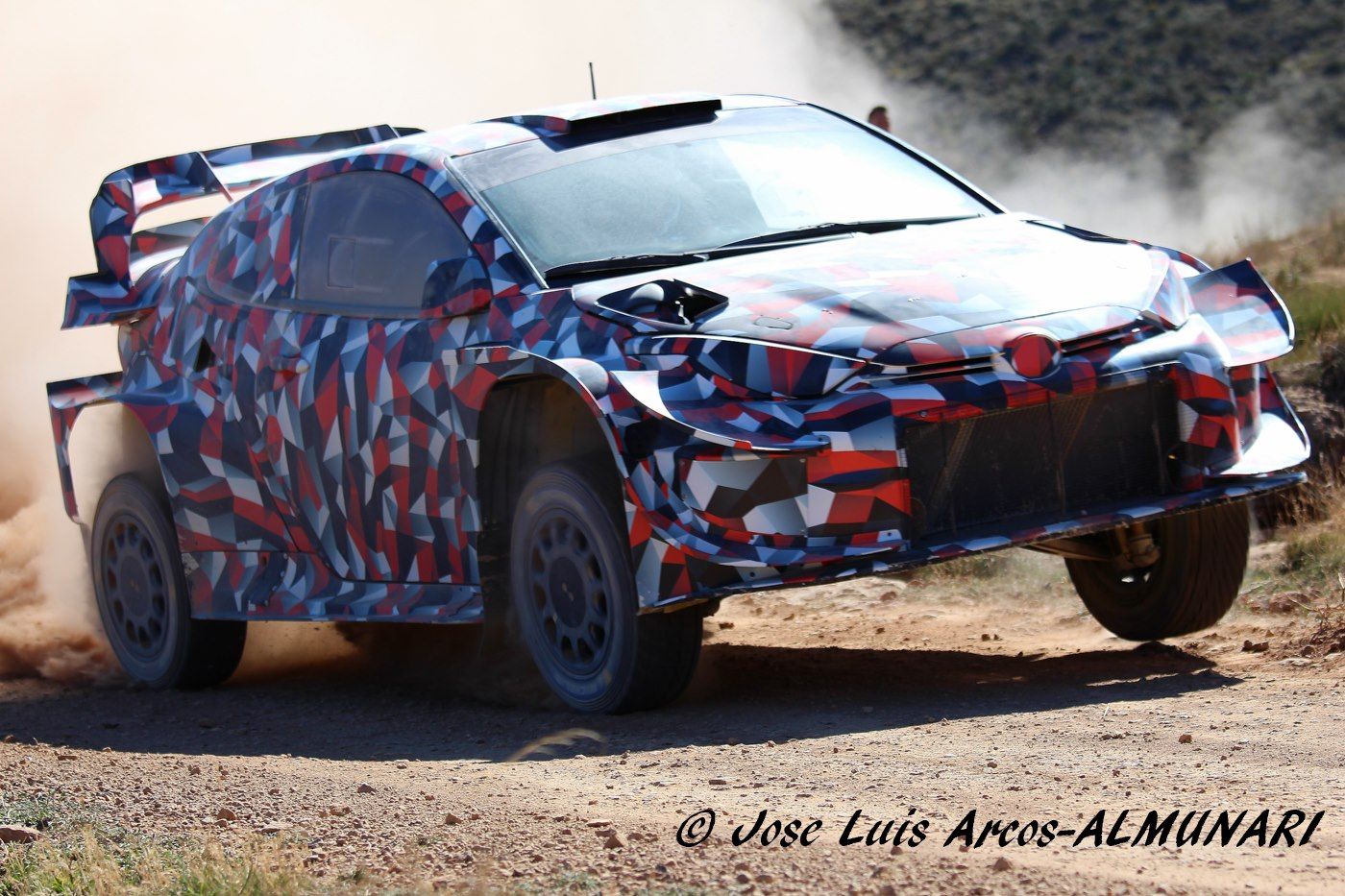 Surprisingly, the car currently displayed at Toyota’s facilities has not any roof scoop, while images from the tests prove that the car already included a roof scoop.

According to Toyota Technical Manager Tom Fowler’s declarations to Autosport, the team “learned a lot from this car and for Rally1 there was some learning, also we used some of the information to make updates to the previous WRC car”.

The severe reduction in the aerodynamics of the cars introduced in the 2022 regulations by FIA prevented Toyota from taking advantage of most of the aero development work done for the GR Yaris WRC, as important parts such as dive planes, fender vents or rear diffusers were banned. Even so,  some aero details of the GR Yaris WRC can be identified in the 2022 GR Yaris Rally1, such as the extended side skirts or the big gap between the wheel and the arch (especially at the front of the 2022 car).

In summary, a very good development work bonce again by Toyota that had to be mostly rejected due to the circumstances. It would have been really nice to see the car in the stages. At least, some elements could be used in  2022, and not all efforts were in vane.